Would you visit “the most dangerous place on Earth?” The most tense border in the world? The world’s only demilitarized zone? I would. In fact, I did. One of the main reasons I included South Korea in my plans in the first place was so that I could visit the DMZ, or demilitarized zone, between North and South Korea. There are only a few different tour operators within South Korea, and we chose to go with VVIP Travel. 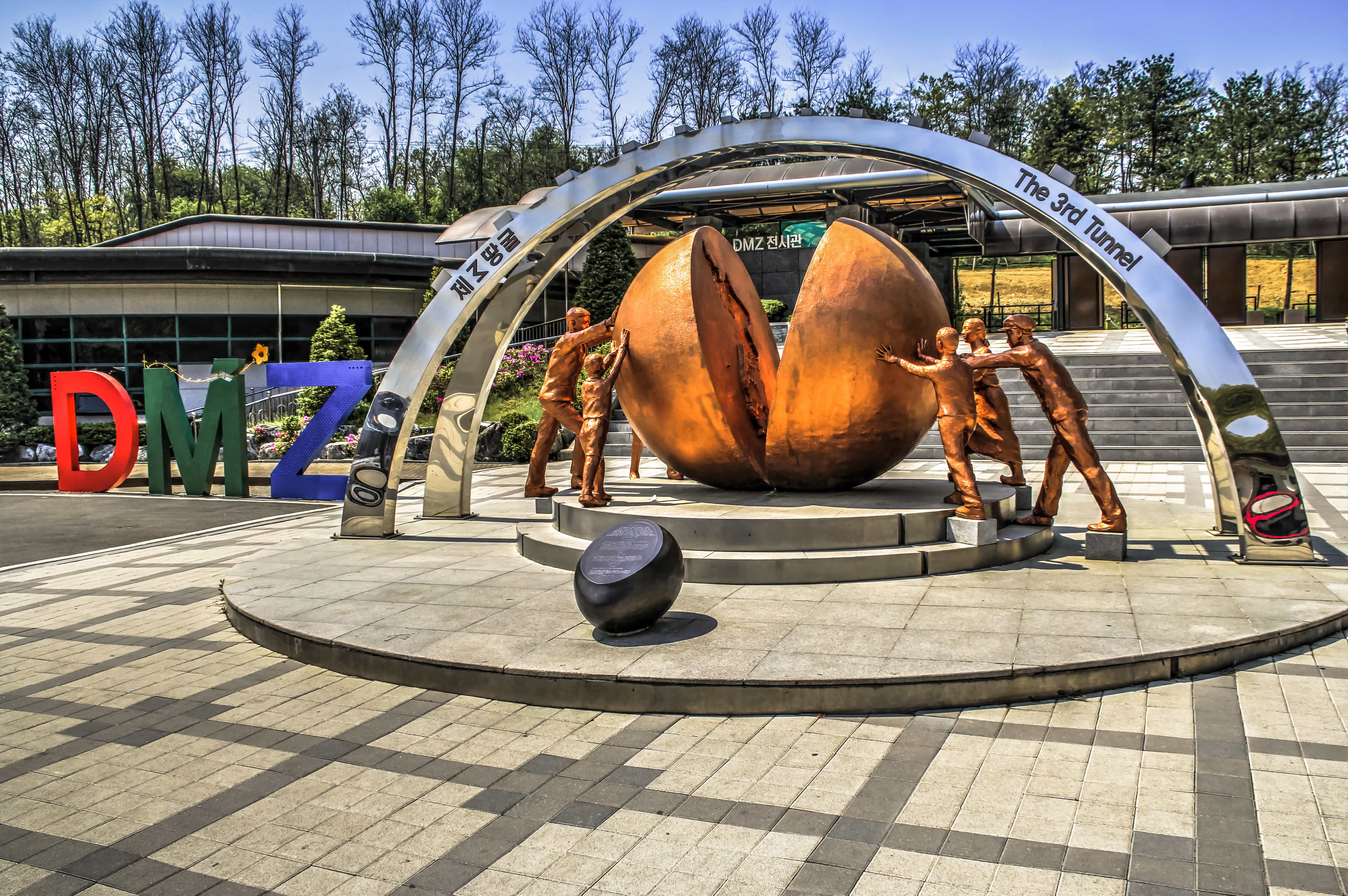 There are a two things to know before booking your tour: 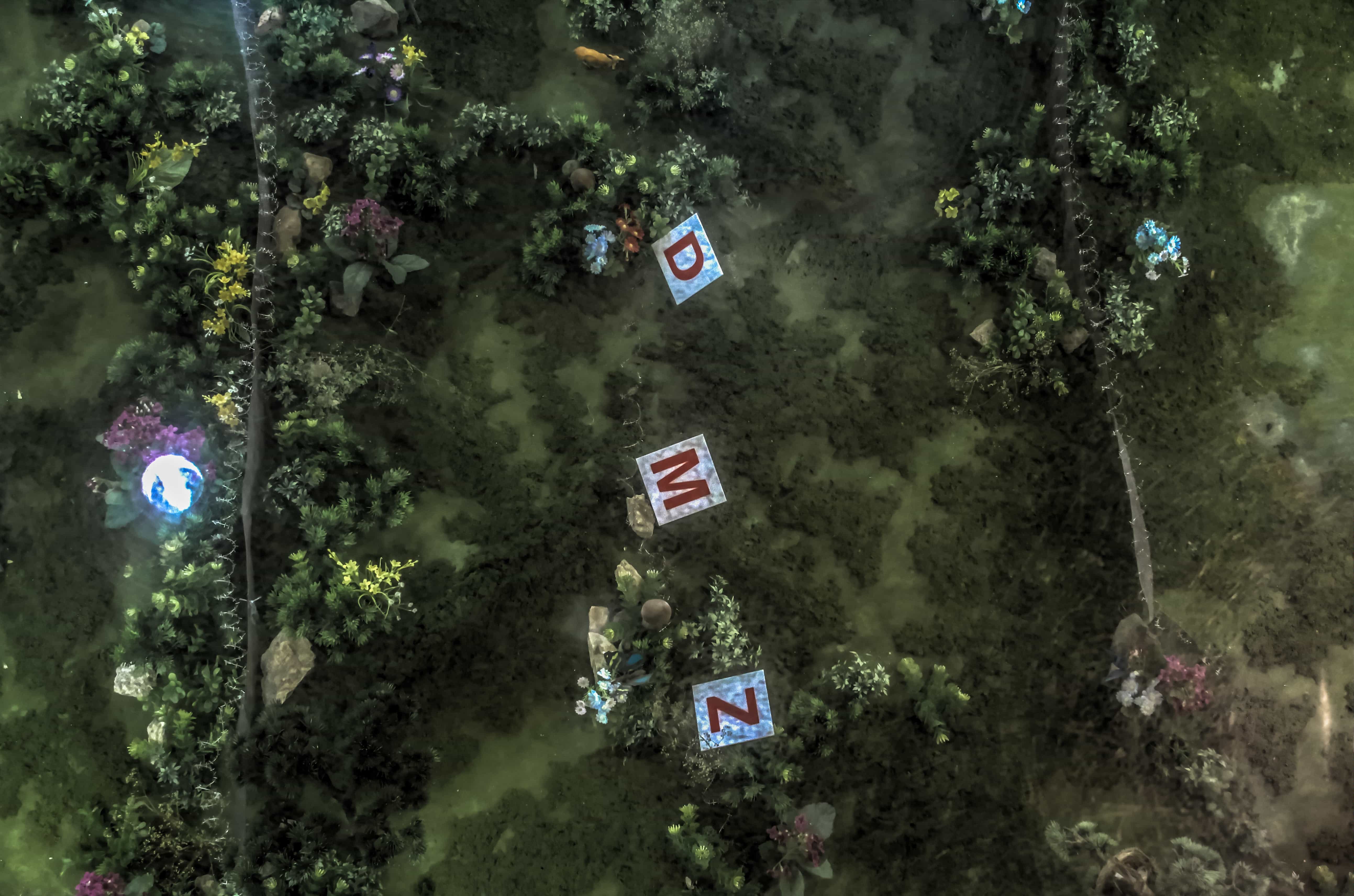 A few facts you should know before joining the tour: 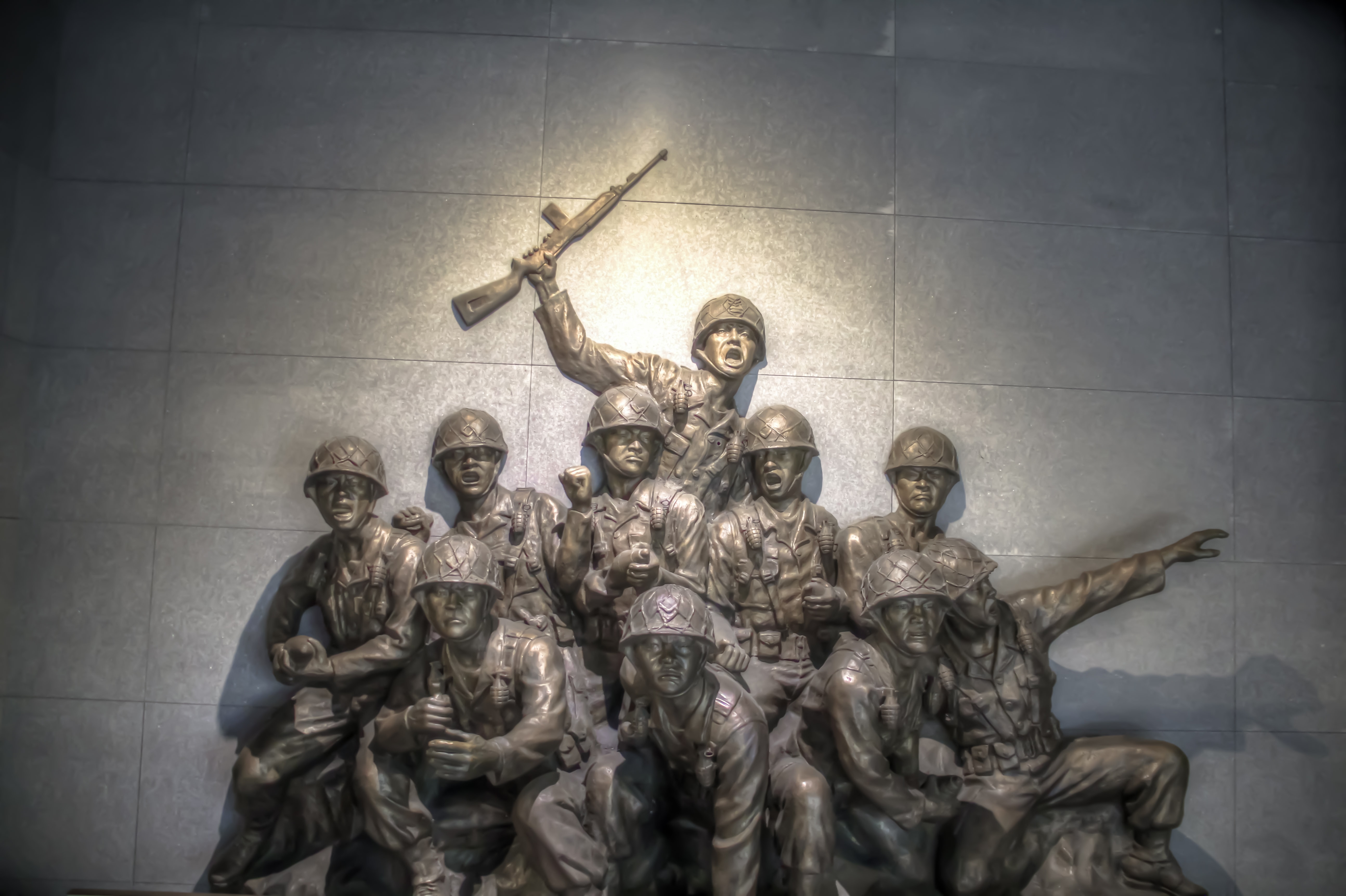 With the Soviet Union and China backing North Korea and its quest for communism, and the United States backing South Korea and its quest for democracy, the Korean war broke out. Just two years after achieving independence, North Korea attacked South Korea on June 25, 1950 to unify the peninsula under communist rule; Seoul was captured within three days, yet the war lasted over three years. 3.9 million deaths later, and a country in ruin, the war came to an end on July 27, 1953 with a signed ceasefire agreement. This ceasefire led to the creation of the DMZ, the longest ceasefire zone in history.

The DMZ was created to prevent war from breaking out again and extends 2 km north and 2 km south of the demarcation line. This zone symbolizes the importance of national security and a space for the era of unification. 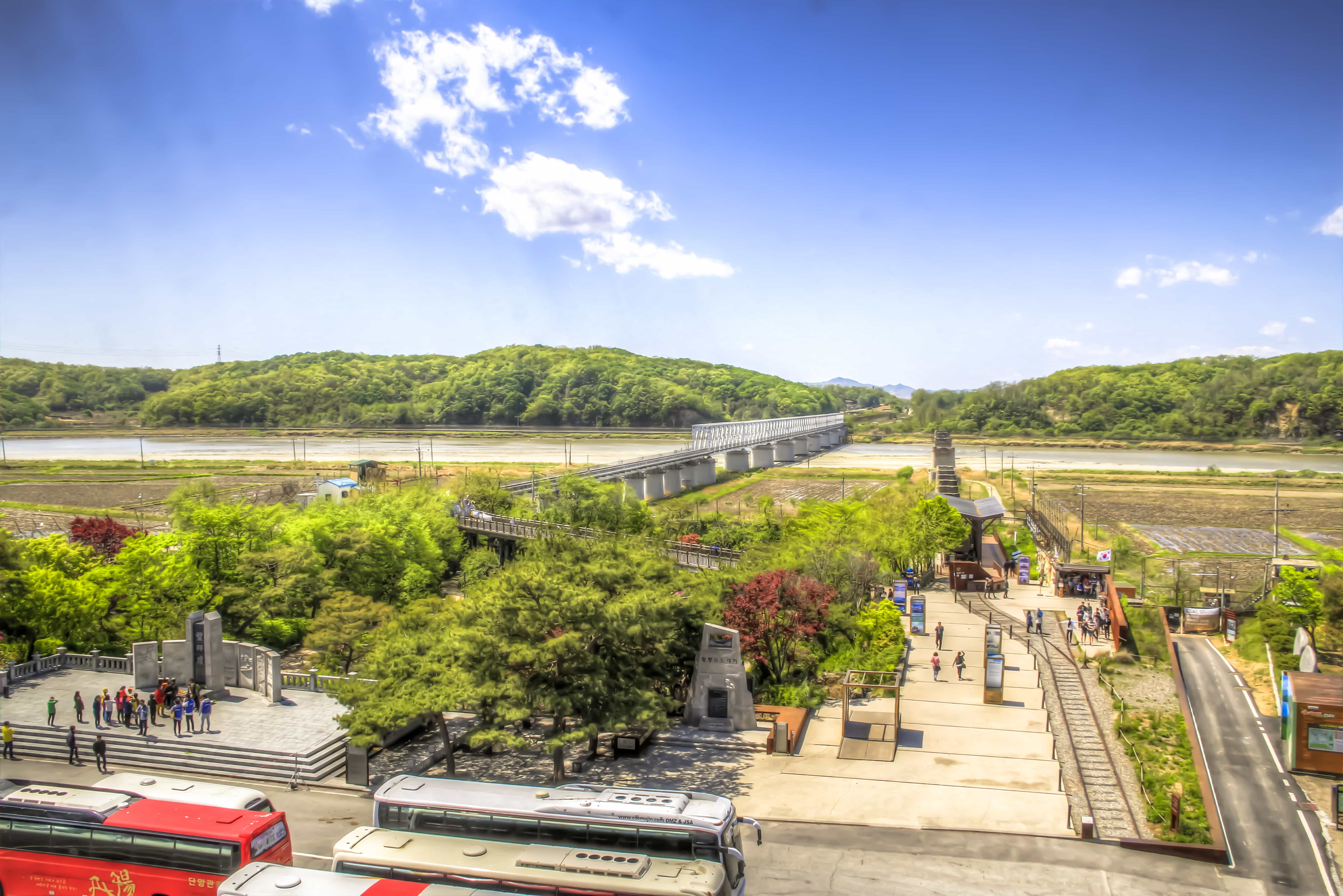 Our tour began at Imjingak Park, 7km from the military demarcation line. It was designed in 1972 in hopes that there would be unification between the two countries someday. Within the park you can find tanks and other military hardware, along with the Gyeongui Train Line, which was destroyed during the war in 1950.

You can also find here the Bridge of Freedom, where South Koreans crossed back into North Korea after the Armistice Agreement, and the chilling Mangbaedan Altar, where Koreans separated from their families in the North ritually bow toward their hometown. 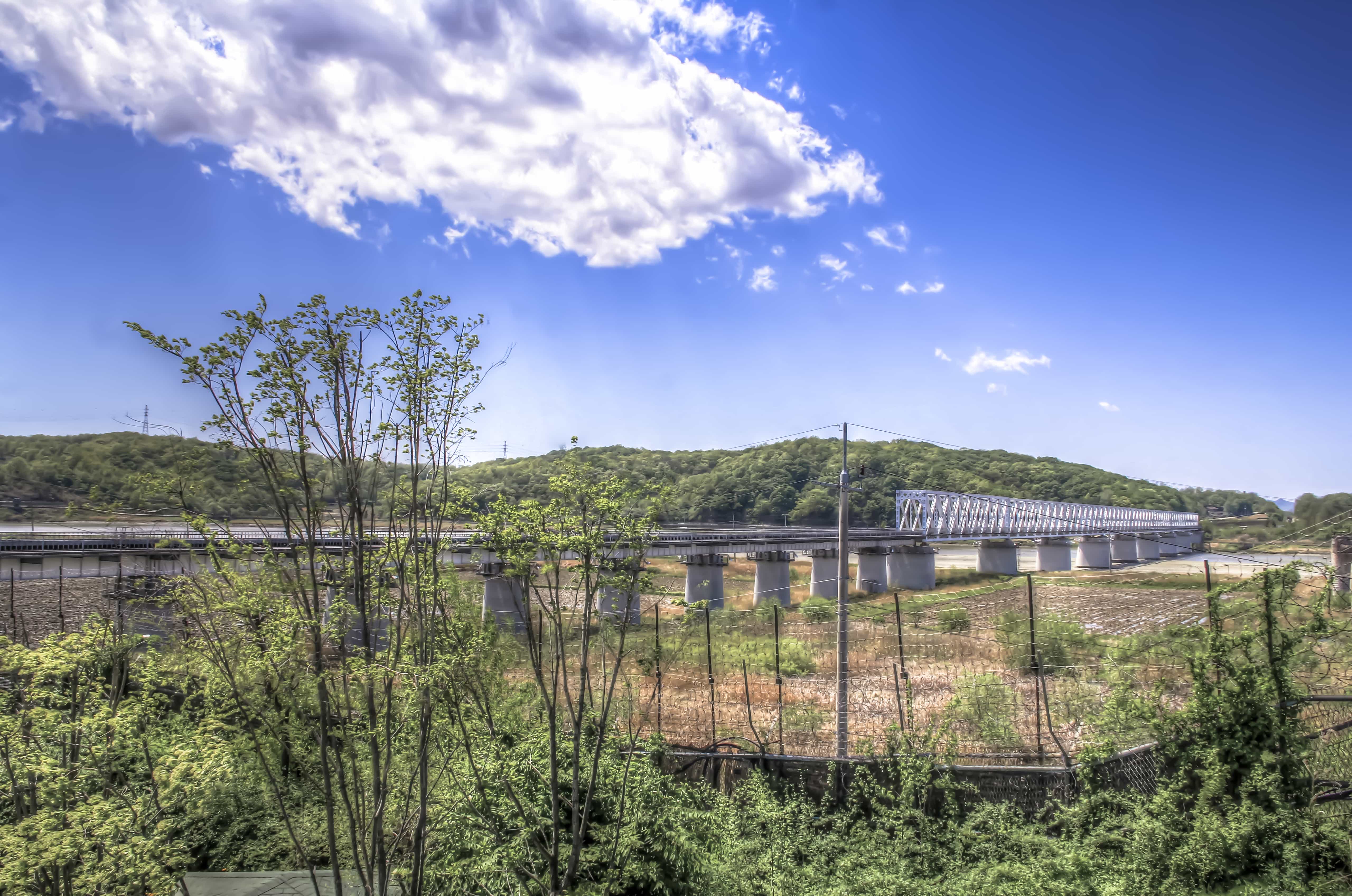 The Peace Bell is probably the most uplifting of the sites at Imjingak Park as it signifies that that peace and unity between the two countries will be possible someday. 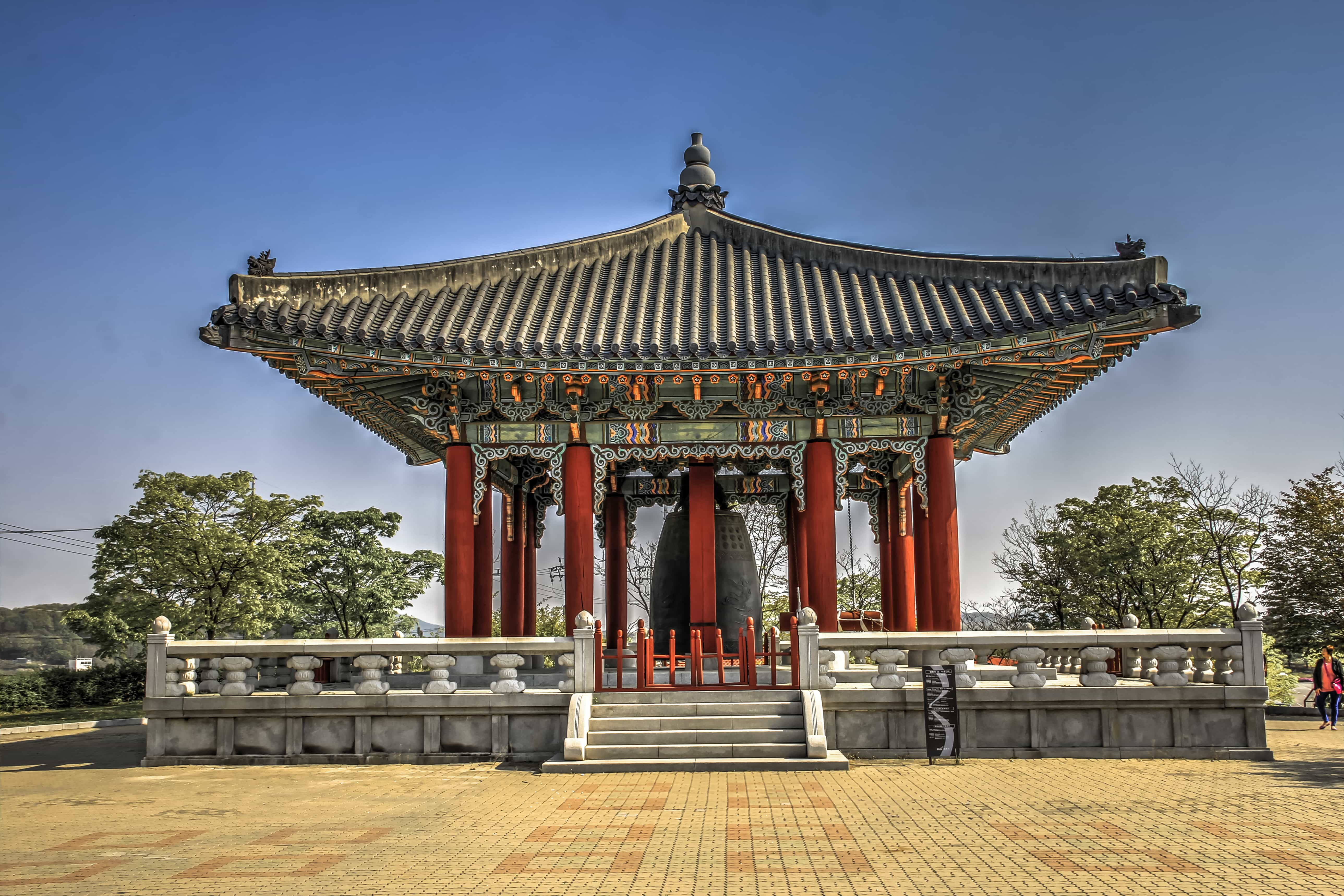 From Imjingak Park, we drove to the DMZ checkpoint. Photos are not allowed during this portion of the experience. A Korean soldier boarded our bus to check all of our passports. Supposedly, it’s an extremely competitive position in the military; these soldiers in particular speak English, are skilled in martial arts, smart, and supposedly the most good-looking of the bunch.

One of the most interesting aspects of the DMZ tour was our exploration of the Third Infiltration Tunnel 75 meters underground. This incomplete tunnel, constructed by North Korea and filled with dynamite, is only 44km from Seoul. Once discovered, the United Nations accused North Korea of violating the Armistice Agreement of 1953, as they dug under the demarcation line to invade South Korean territory.

2/3 of the tunnel is in North Korea, but we were able to walk the first 265 meters from the South Korean side; had we walked a further 435 meters, we would have been in North Korea. The tunnel itself was big enough for 30,000 soldiers with light artillery to pass through per hour! 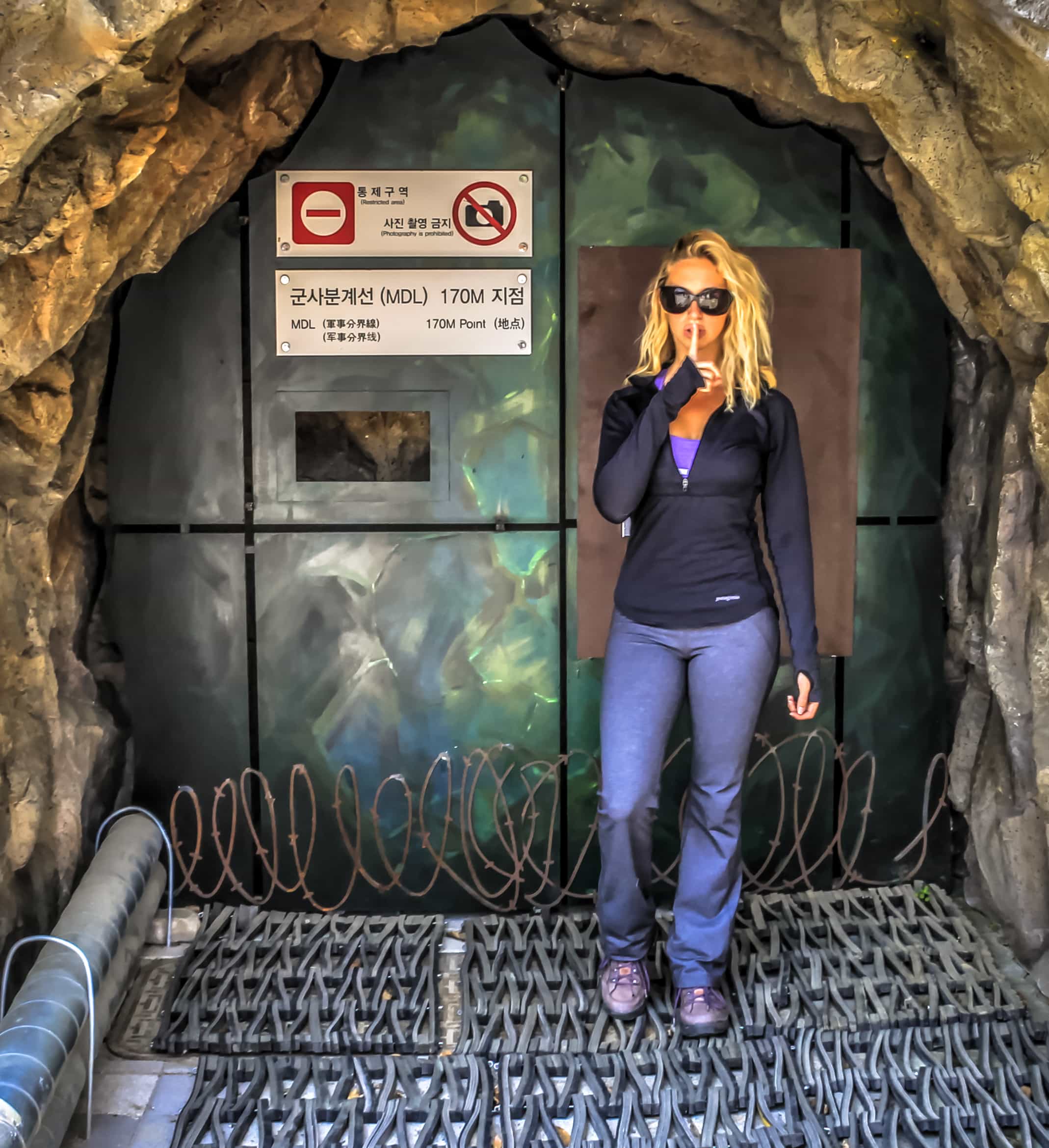 South Korea discovered it’s first “tunnel of aggression” in 1974, the second in 1975, the third in 1978, and the fourth in 1990. The military is continuously searching for other tunnels, as it is believed that there could be up to twenty more tunnels leading into South Korea. With the discovery of these four tunnels, it can be assumed that there was a plan for simultaneous full-scale assaults on South Korea.

Once again, photos were not allowed as it is still a heavily guarded attraction.

Located only 1.9 km away from the borderline, the Dora Observatory may be the reason why most people join the DMZ tour. At this observatory, you have the ability to look into North Korea. You can only take photos from behind the yellow line, of which I hopped on Erik’s shoulders to snap a shot, but you can move up closer to the railing for a better view. 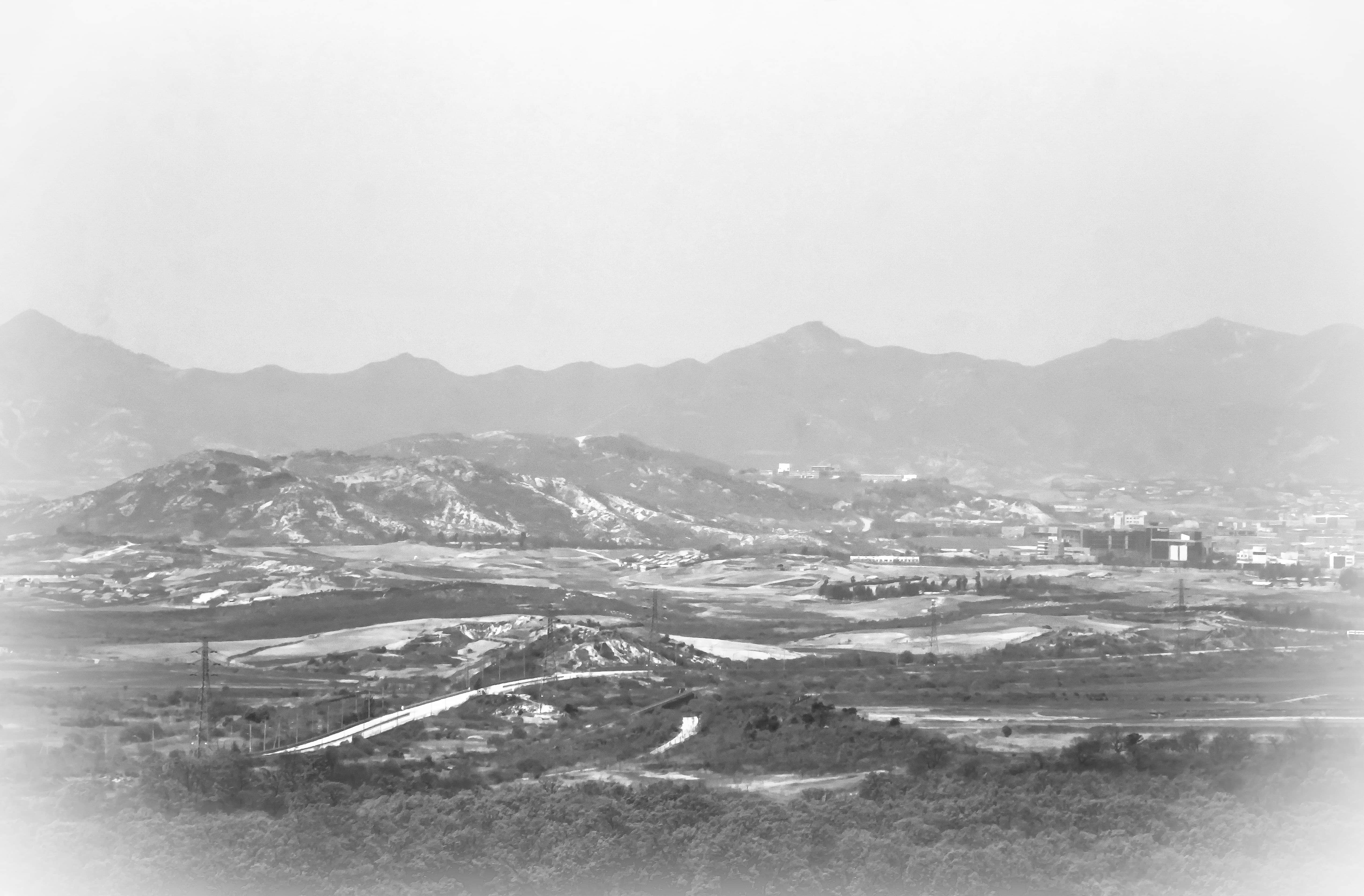 For 500 won, you could use their telescopes to get a closer look into North Korea. You could easily see North Korea’s tree-less mountains, their propaganda village, and the huge North Korean Flag — one of the highest flags in the world! 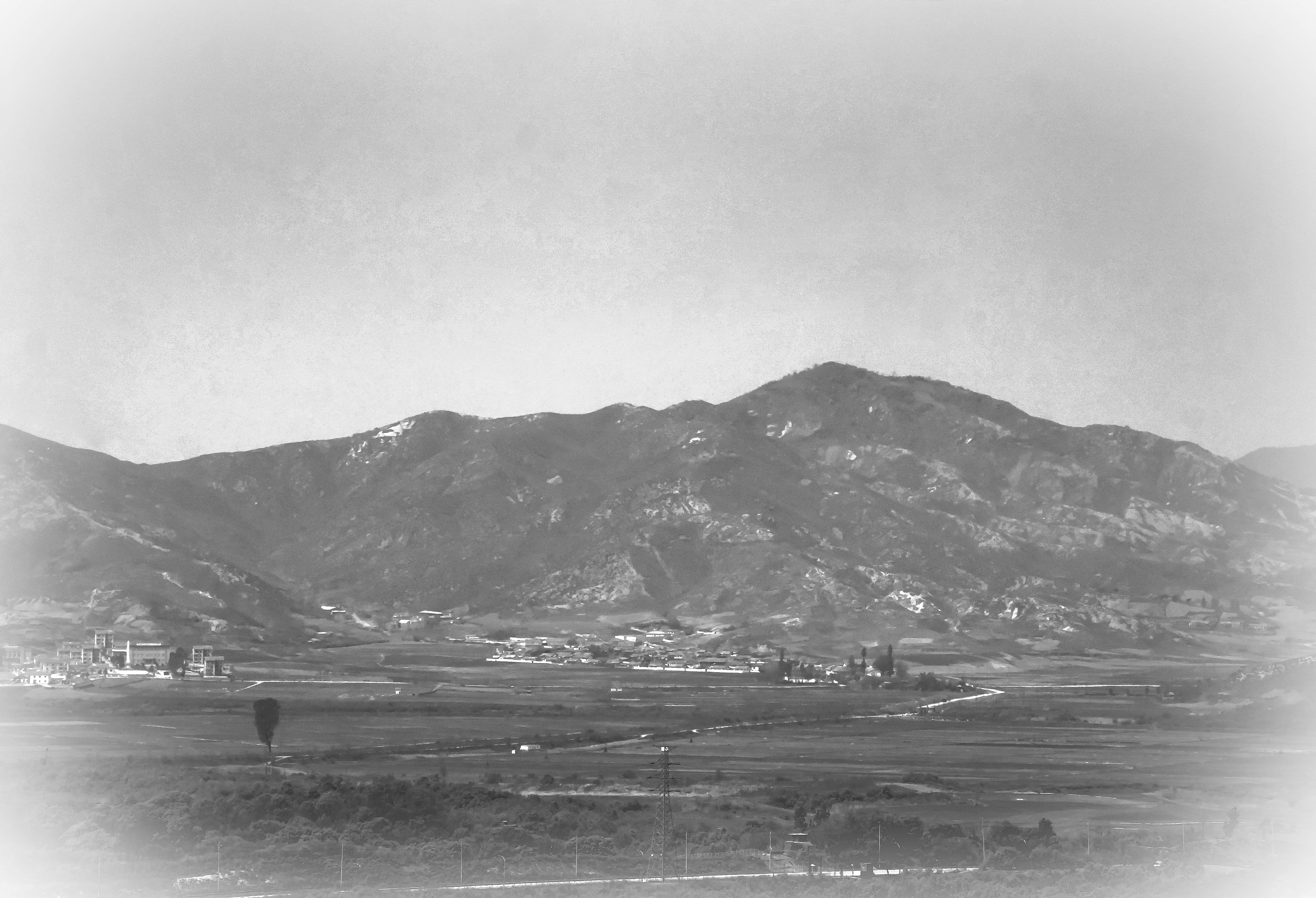 Our final stop of the DMZ tour brought us to the Dorasan Train Station. This is the northernmost international station located only 700 meters from the Southern Boundary Line of the DMZ and 205 km from Pyongyang, the capital of North Korea; it is that close to North Korea. 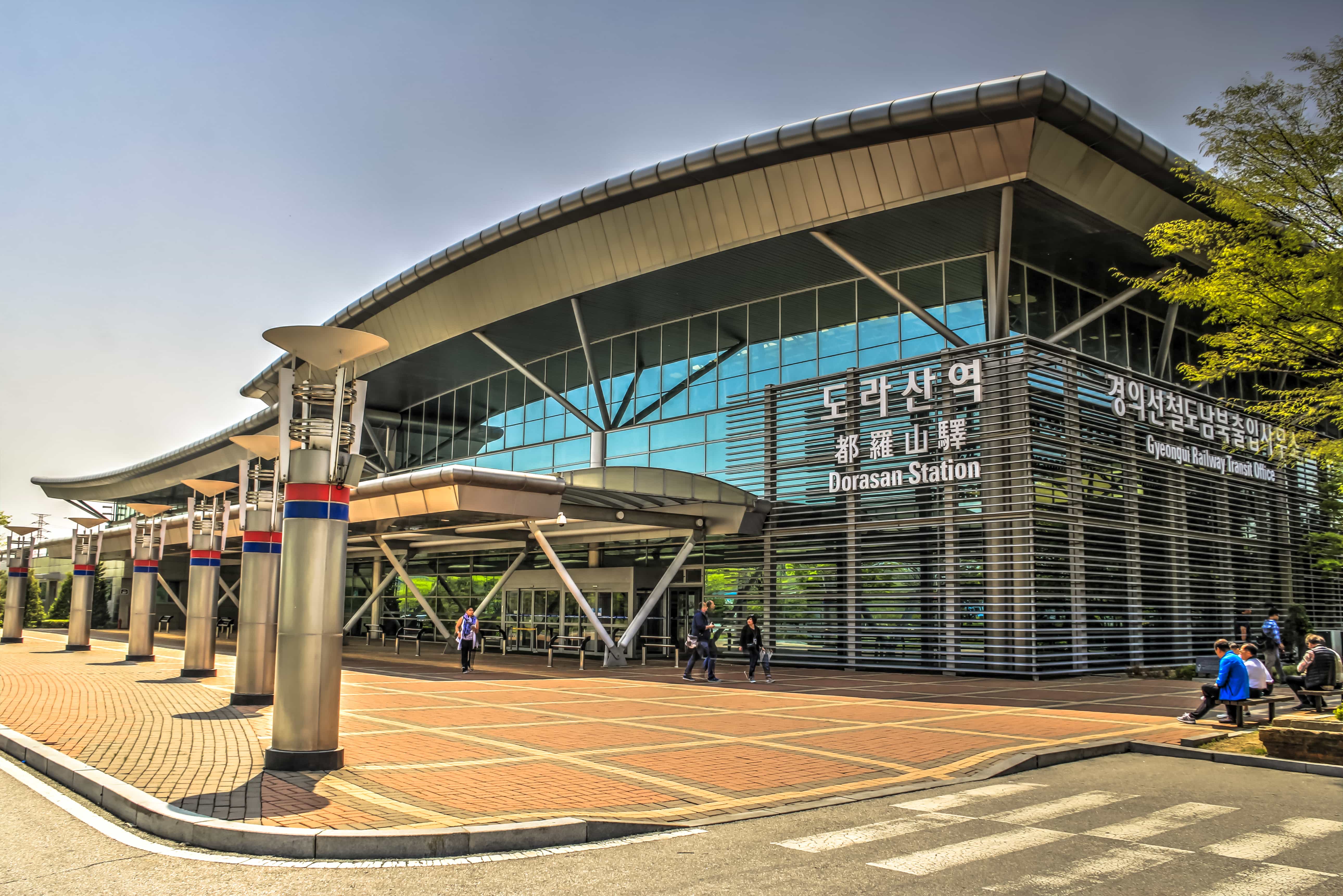 This train specifically led to the Kaesong Industrial Complex located within North Korea. This complex was the only place where North and South Koreans worked peacefully — the owners were South Korean and the 50,000+ workers were largely North Koreans. The railroad itself symbolizes a place of division, yet an opportunity for unification and change. Many contributed money in hopes of peace between the two countries. Unfortunately though, the Kaesong Industrial Complex, and subsequently the Dorsan Train Station, were shut down this past February as tensions rose with North Korea’s recent rocket launch and nuclear tests. 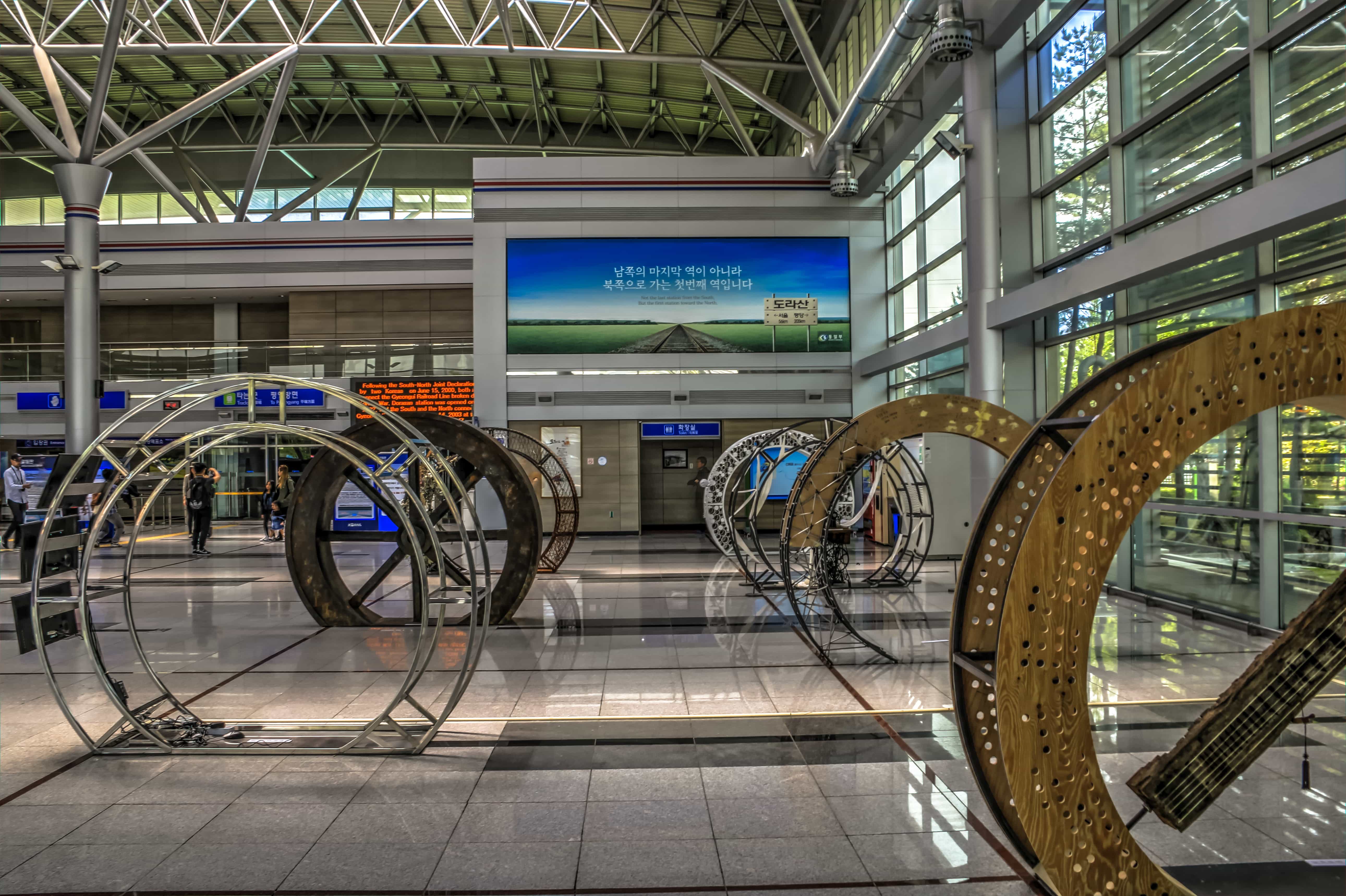 From the station, we drove through one final checkpoint where our passports were checked a second time, and exited the DMZ.

The DMZ Tour with VVIP Travel is definitely not to be missed when visiting Seoul; it’s an important educational experience that will make you yearn for peace within the Korean Peninsula. It is professional and profound, and will most definitely leave you thinking. 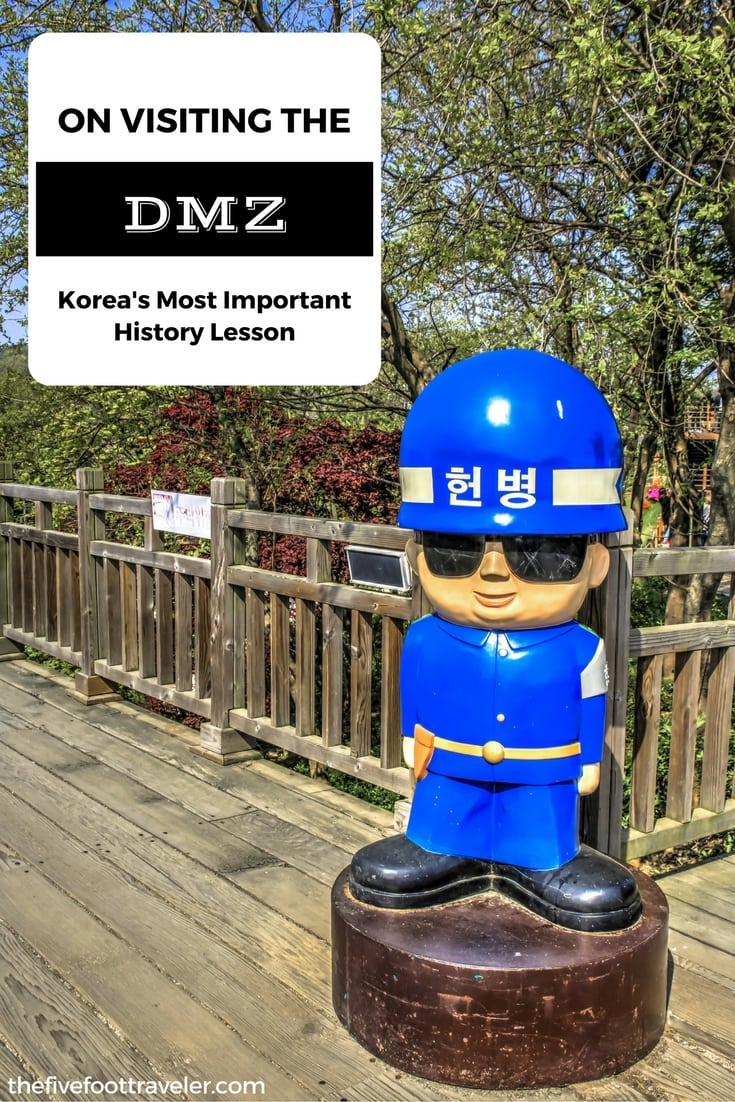 **Special thanks to VVIP Travel for sponsoring our experience. As always, all opinions are my own.