Via Dolorosa & Church of the Holy Sepulchre

We began walking the Via Dolorosa, considered to be the path that Jesus walked, carrying the cross, on the way to His crucifixion. It is clearly marked with the Stations of the Cross along the way, so, naturally, we started with Stations One and Two, the trials by Pilate. We visited the Church of the Condemnation and Imposition of the Cross, the Church of the Flagellation, and the Church of Ecce Homo; it was on the site of these three churches that the Bible deems as the location of Pilate’s judgment of Jesus. 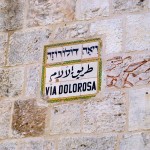 We continued to walk the path of the cross, stopping to acknowledge and learn about each station of the cross (typically inscribed above a chapel of sorts). Nine Stations of the Cross are located along Via Dolorosa, while the remaining Five Stations are inside the Church of the Holy Sepulchre, the Church to which Via Dolorosa leads. As this is considered by many as a Christian Pilgrimage, one would assume that it was a solemn walk. That was not, however, the case as the Muslim markets lined Via Dolorosa, which detracted from the spiritual atmosphere. 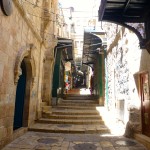 Before entering the Church of the Holy Sepulchre, we sat in the courtyard to learn about the history and the division by sector of Christianity (like the Tomb of Mary). Constructed in 326 after Constantine’s mother, St. Helena, discovered the “True Cross” (a piece of the cross upon which Jesus was crucified), it is said to be the site of the resurrection of Jesus. 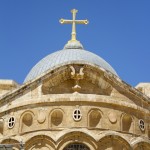 We entered the Church and navigated through the crowds to take in the Eastern Orthodox influence; while it was a bit flashy, it was beautiful all the same. Upon entering, we climbed the stairway to Golgotha, traditionally considered the site of Jesus’ Crucifixion. The main altar (belonging to the Greek Orthodox) contains the Rock of Golgotha (sealed between glass), and beneath the altar there is a hole said to be the place where the cross was raised. There was an overflow of people waiting to kneel, cry, and praise at the altar. Directly beside this alter was the Chapel of the Nailing of the Cross (belonging to the Roman Catholics), and beside that was the statue of Mary working wonders (the 13th Station of the Cross, where Jesus’ body was taken down from the cross and given to His family). 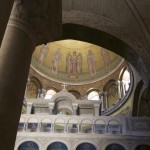 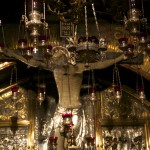 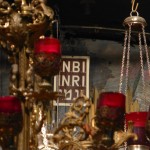 We went down a floor, directly beneath Golgotha and the two chapels, to the Chapel of Adam. Supposedly, Jesus was crucified over the place where Adam’s skull was buried. According to the New Testament, Jesus was crucified at Golgotha, “the place of the skull” (Mark 15: 22-25). What’s more fascinating about this chapel though was the visible cracking in the Rock of Golgotha behind the altar. This splitting of rock is traditionally attributed to an earthquake that occurred when Jesus died on the cross – “At that moment the curtain of the temple was torn in two from top to bottom. The earth shook, the rocks split” (Matthew 27:51). We were positioned directly under the main altar of crucifixion.

We exited the Chapel of Adam and found ourselves back near the entrance, in front of the Stone of Anointing. It is said that that was the spot where Jesus’ body was prepared for burial by Joseph of Arimathea.

From there we wandered into the Rotunda (located under the larger of the church’s two domes). The chapel in the middle, the Aedicule, has two rooms. The first room is said to hold Angel’s Stone, which is believed to be a piece of the stone that sealed Jesus’ tomb, and the second room is the tomb itself. Waiting in line to enter was a sobering experience, and to be at such a profound site so important to the Christian faith was immensely moving and emotional. We could have spent all day going in and out of every chapel (from the Prison of Christ to the Chapel of St. Mary Magdalene where Mary met Jesus after his Resurrection to the Chapel of the Blessed Sacrament), but we realized that we needed to keep moving. 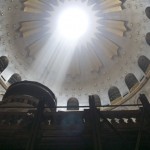