From V-GO Hotel to the Rock Tombs of Fethiye

From Cappadocia, we decided to explore the Turkish Riviera and went from Antalya to Fethiye via Kas. In Kas we were expecting to find beautiful sea and beaches based off the recommendations of several travelers and locals. Kas was, however, disappointing in respect to its beaches; that is to say there were no beaches easily accessible from the main bus station (unless we perhaps missed the memo). The coast was rocky and there were no sandy beaches in sight. The sea looked incredibly blue and all I could imagine was jumping into the water. We spent a little bit of time to eat ice-cream by the water before catching another bus, this time to Fethiye. 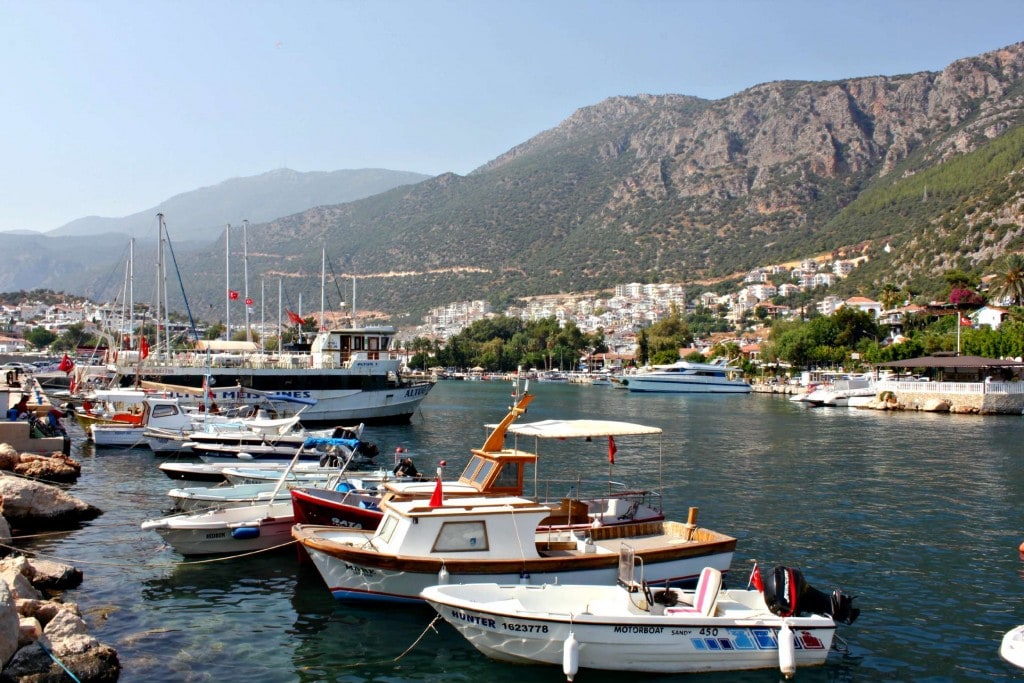 We arrived in Fethiye and picked up a white & orange mini-bus to V-GO Hotel. These mini buses run throughout the city in multiple directions. Our route to V-GO Hotel was basically a straight shot and, along the strip of boardwalk to V-GO Hotel, we could see ample places to eat or grocery shop, should you be looking for snacks, water or alcohol. Once at V-GO Hotel we walked in and were greeted by an exceptionally friendly guy named Sezer. His English was excellent, which is great if your Turkish is not so good, and his smile was always showing. He immediately asked what our plans were for Fethiye and the surrounding areas, and was eager to lend a helping hand. In addition to ferry suggestions and travel planning, V-GO Hotel offers services for numerous island boat cruises, paragliding, diving, rafting, and kayaking, on top of helping to arrange excursions to Ephesus and Pamukkale as well. 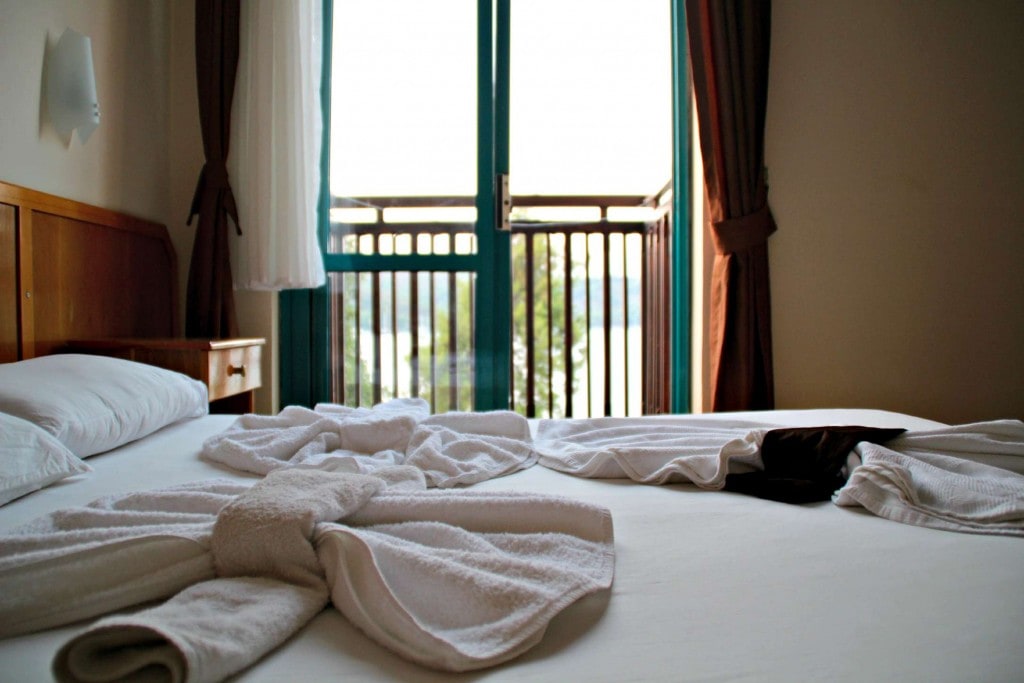 Entering our room we immediately became comfortable, with special thanks to the air conditioning. The room wasn’t the largest, but that doesn’t really matter when you have a cozy bed and your own porch; the porch overlooked the harbor of Fethiye and the patio on which V-GO offers breakfast in the mornings and a massive BBQ spread for dinner, complete with a bar and good music. The dinner looked amazing and was being cooked outside in an authentic brick-oven and open flame. Plus, it was all you can eat appetizers. At first we were concerned that the music would keep us up at night, as our patio was situated directly above the bar, but that thought proved to be false. We slept fabulously and the music was kept to a very respectable volume. 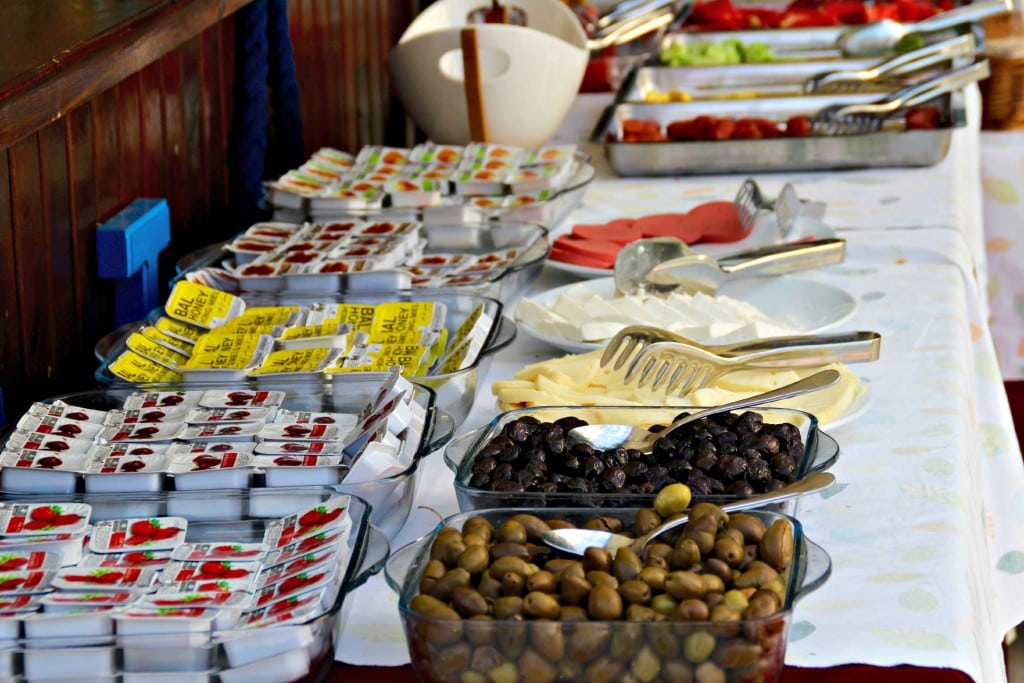 The next morning we woke up for breakfast on the patio. It was a typical Turkish breakfast: granola, fresh tomato, cucumbers, jam, bread, multiple types of cheeses, cereal, sausage and even french fries for you carb lovers. When we were checking out, we realized that adjacent to the reception area was a rather expansive indoor bar and night club. Apparently, V-GO Hotel is also a popular spot some days of the week for their night club, how awesome! Sezer provided us with plenty of information on how to get to the Rock Tombs of Fethiye: take the minibus from outside the hotel to the bus station (leave our bags with the bus company) and either catch another mini bus or walk. We decided to walk since it was a beautiful day, as it always is in Turkey. 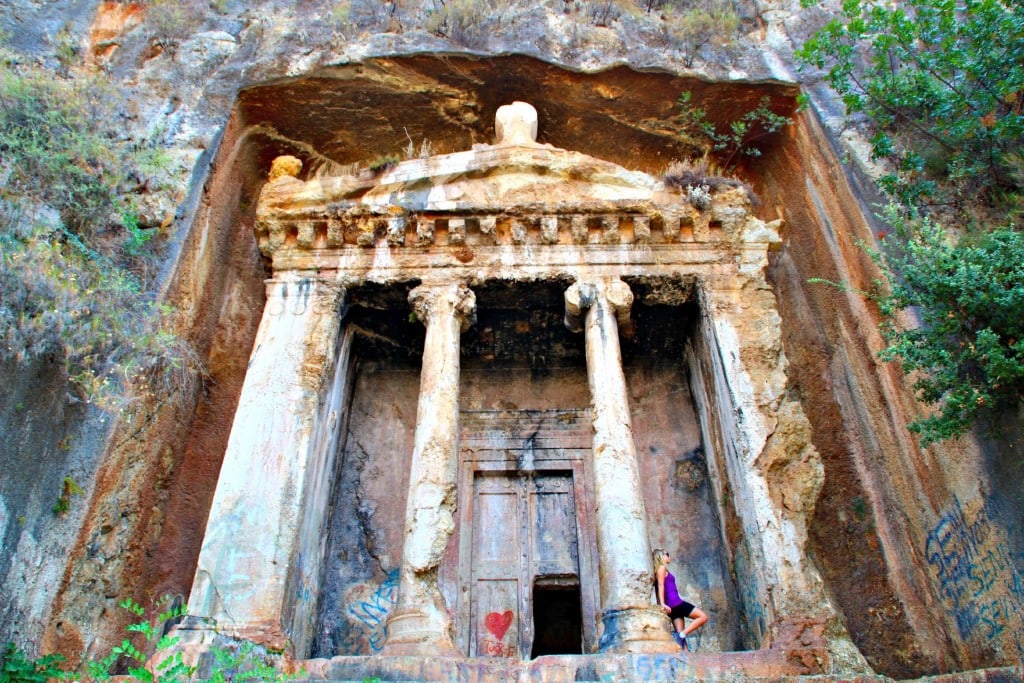 The walk to the Fethiye Lycian Tombs from the main bus station in Fethiye takes only about 20 minutes. The tombs just appear out of no where on the mountain face! Built into the rock, the tombs are an interesting contrast to the edge of the town. Ancient tombs perched high above the city actually offered us a better view of the town than the “majesty” of the tombs themselves. They are interesting to see, but not that impressive as stand-alone monuments. The view definitely makes it worth it though. 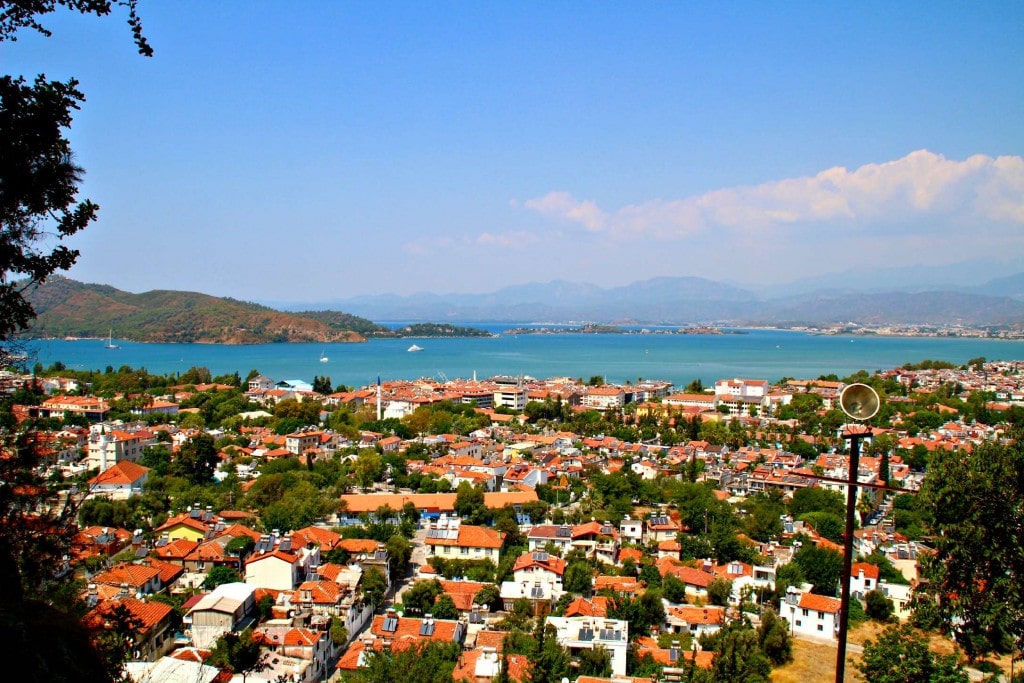 We, of course, had to stop at a bakery that we had passed while walking to the Tombs. Inside, we found a vast selection of Turkish pastries. The baklava stood out among the rest though, so we inquired as to what the price for each square was. We had to ask again. And even then we did not believe it, so we  each bought only one piece because we assumed that we had heard wrong. We didn’t. They were the equivalent of $0.17 each… and tasted amazing. We couldn’t believe it. Rest assured, we went up and bought another six! And then another four – I mean, we needed something to satisfy us for the 4.5 hour bus to Bodrum right?! 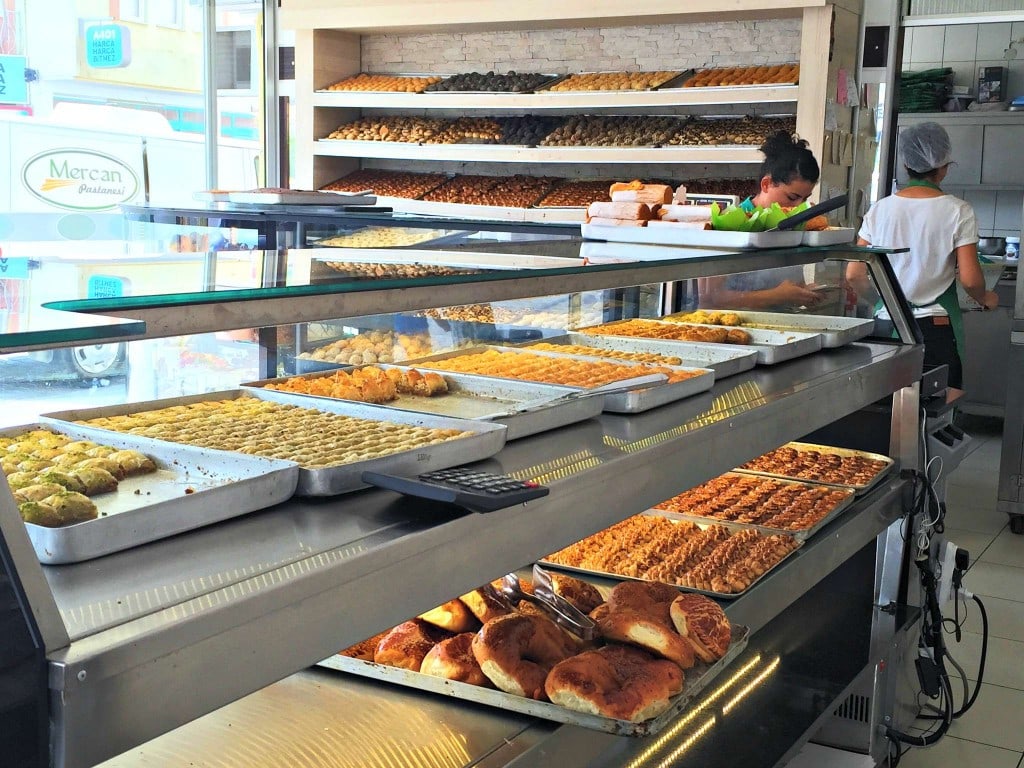