Ukraine has been making headlines over the last few years, and not for good reasons. This country, a country with such a turbulent political history, has been of much interest to me. When we were in Poland, we realized that Ukraine was “so close” and decided to check out the country for ourselves. Granted, “so close” turned out to be an uncomfortable 15 hour bus ride, but that’s beside the point. Not to worry though, we did not go to Crimea! 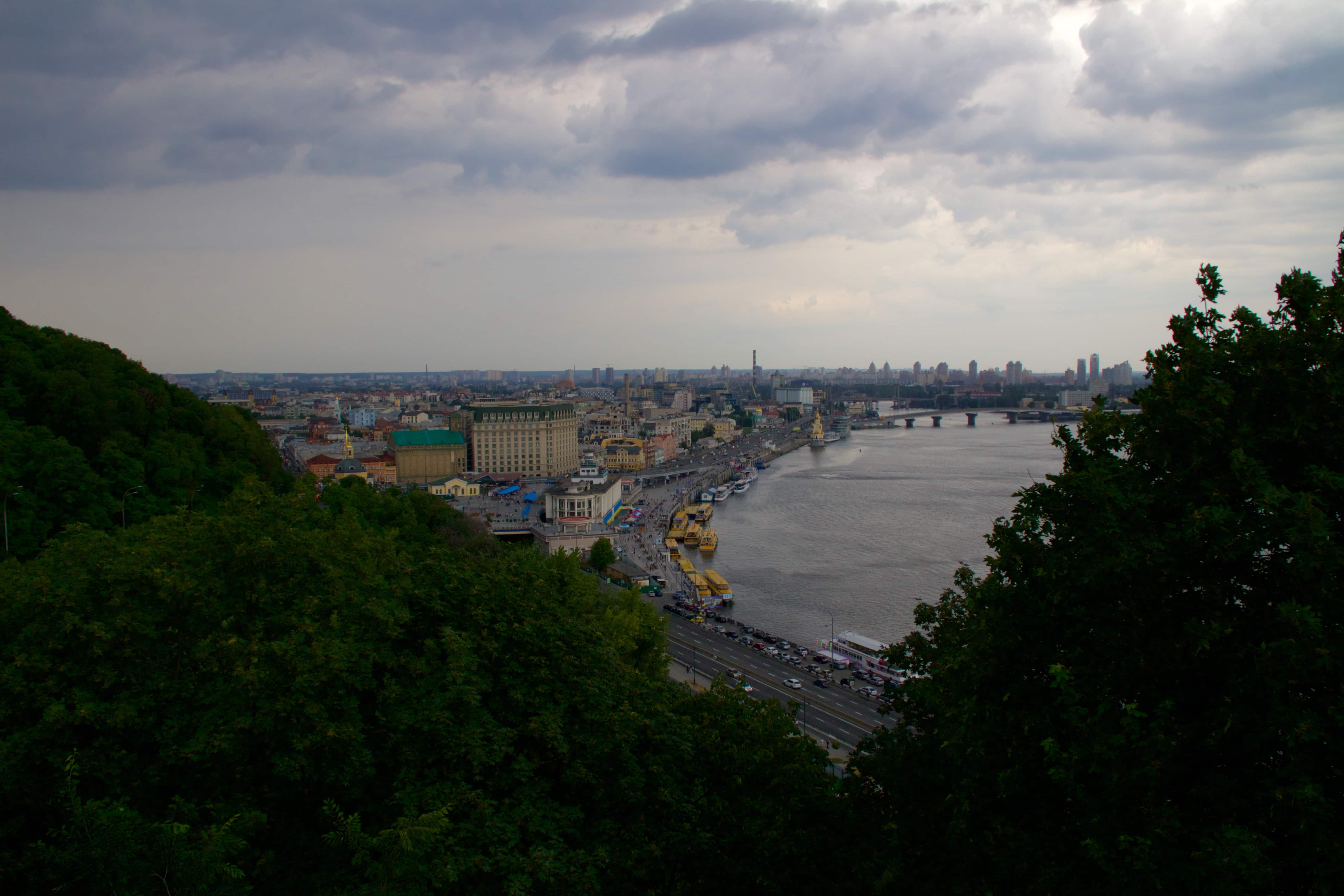 Our first stop was Kiev, Ukraine’s capital city. Kiev is comprised of Ukrainians, Belarusians, and Russians; for quite a while, it represented peace and co-acceptance amongst the three nations. Maidan Nazalezhnosti, or Independence Square, is Kiev’s main square, and the majority of sites can be visited on foot from there. In being the main square though, it became the chosen location for numerous protests over the last twelve years. 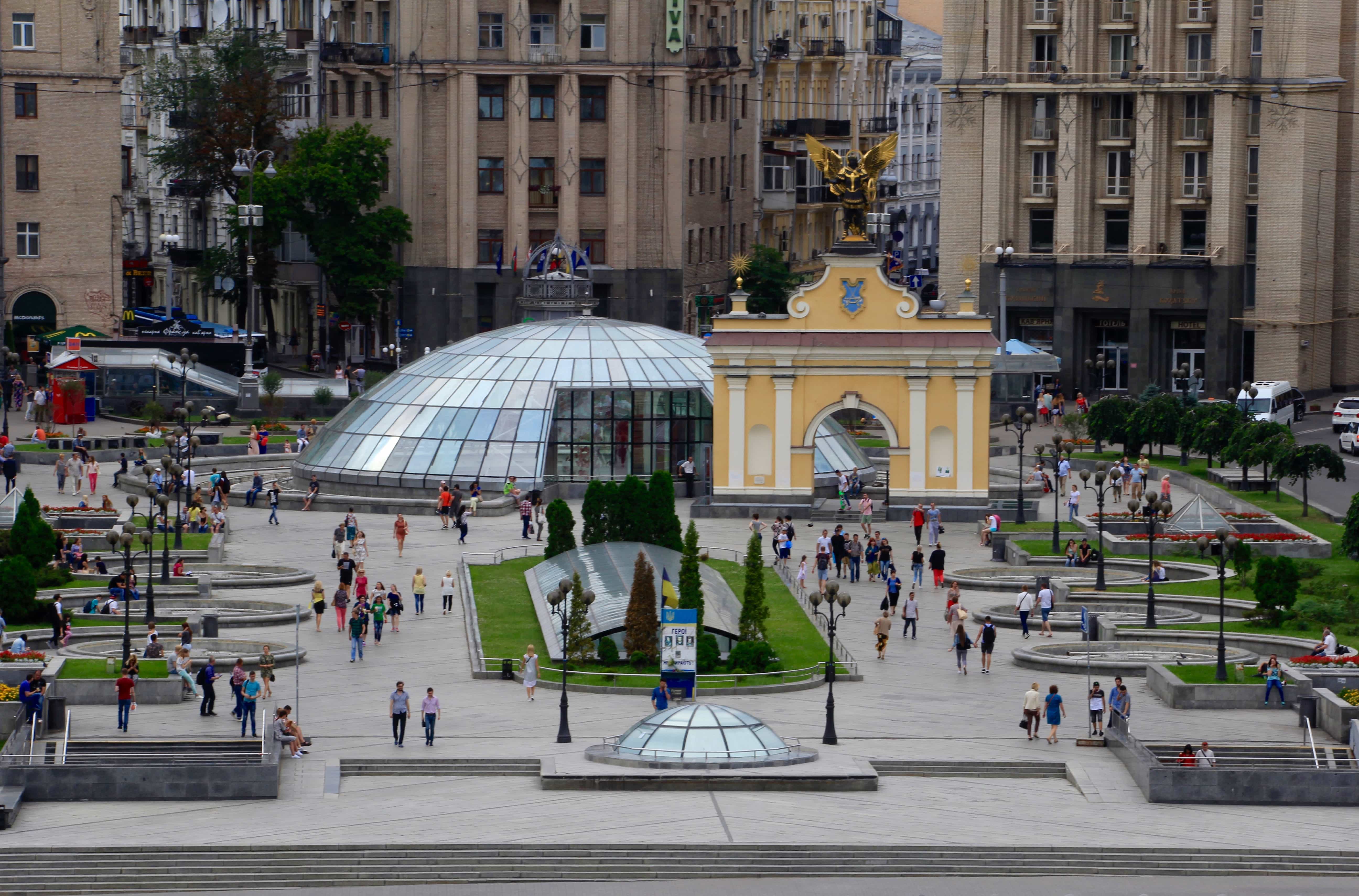 In 2004, Ukrainians took part in the Orange Revolution. Over the course of a few months, half a million people were living, cooking, and sleeping in Maidan to protest unfair elections. The Orange Revolution took place from November 2004 to January 2005 after the 2004 presidential election was deemed incredibly corrupt and fraudulent when Viktor Yanukovych won. Thousands of protestors took to the streets with peaceful protests, sit-ins, and general strikes. None were harmed. Incredibly, the results were annulled and the re-vote proved that Viktor Yushchenko was actually the real winner and that the election was “free and fair.” The Orange Revolution ended on January 23, 2005 when Yushchenko was declared president. Ironically enough, Yanukovych became Yushchenko’s successor in 2010 under supposed fair elections. 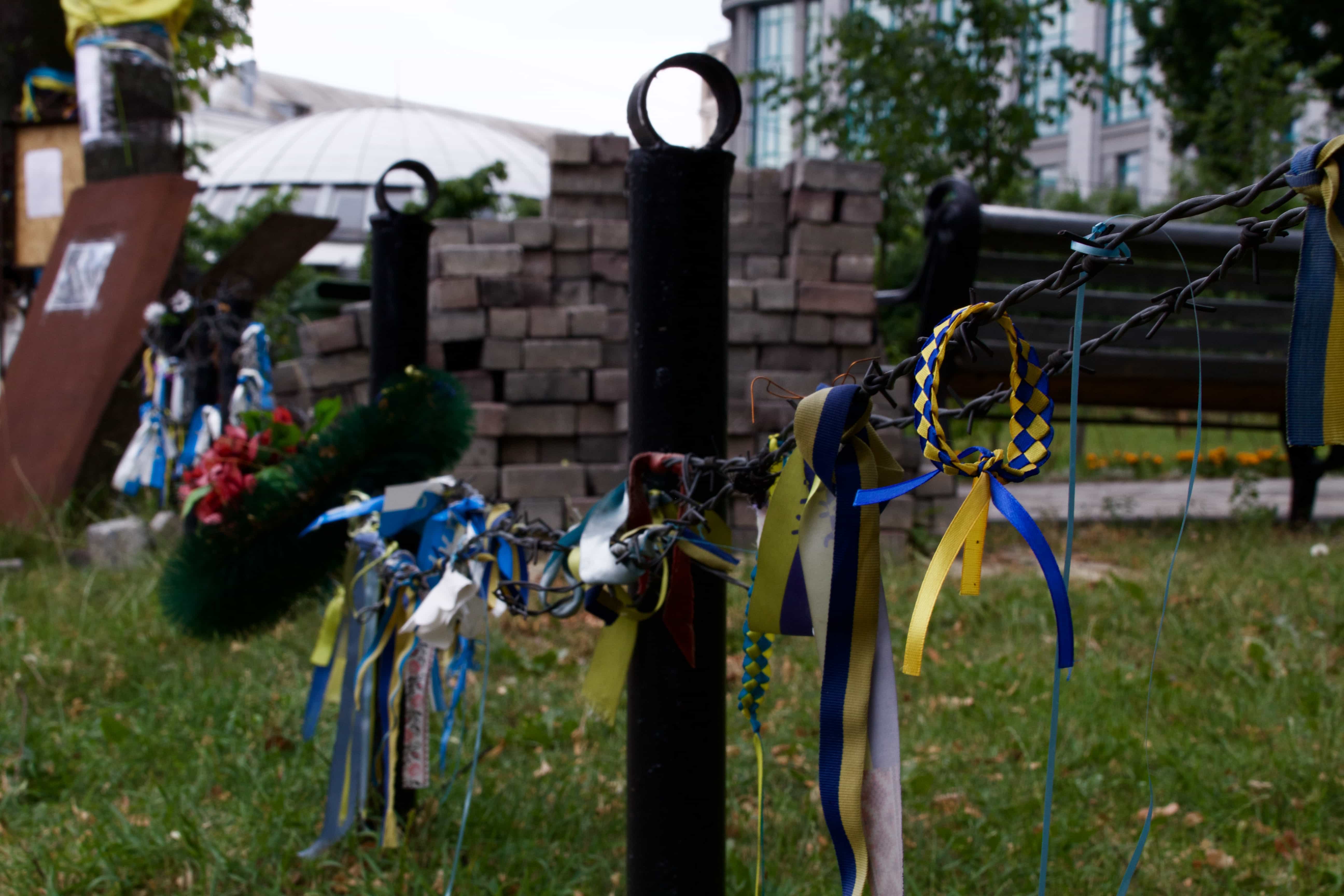 His rule didn’t last long though, because 2014 marked the beginning of the Euromaidan Revolution (Ukrainian Revolution). A series of violent events took place throughout Ukraine, mainly in Maidan, that killed over 100 people. The reason for the Revolution? After the collapse of the Soviet Union, Ukraine wanted to be better linked with the European Union, as they needed funds to liberalize the country. President Yanukovych was supposed to sign the agreement between the EU and Ukraine, but backed out at the last minute. This sparked Euromaidan 2014 as Ukrainians were livid with Yanukovych’s decision. The protests quickly turned violent as the police forces moved from firing rubber bullets to using live ammunition, snipers, tear gas, and grenades to break up the protests; in turn, the protestors responded with more violence. 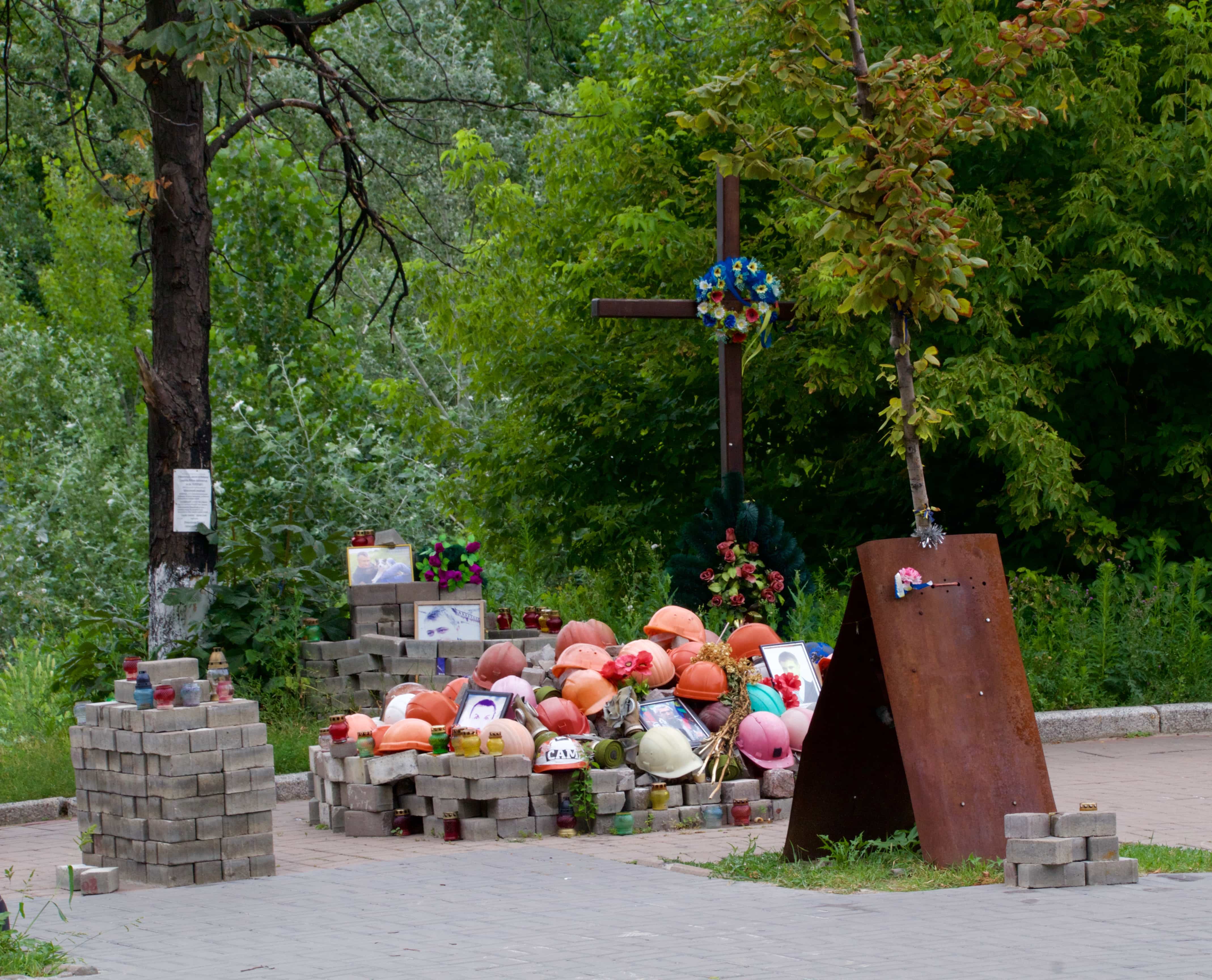 All the while, Yanukovych decided to sign a multi-billion dollar loan from Russia. He ultimately was ousted from power, fled to Russia, and never returned. Euromaidan was officially brought to an end on February 21, 2014 with the Agreement on Settlement of Political Crisis in Ukraine. While this helped Kiev, it’s pretty common knowledge that all is not well between Ukraine and Russia, even today… 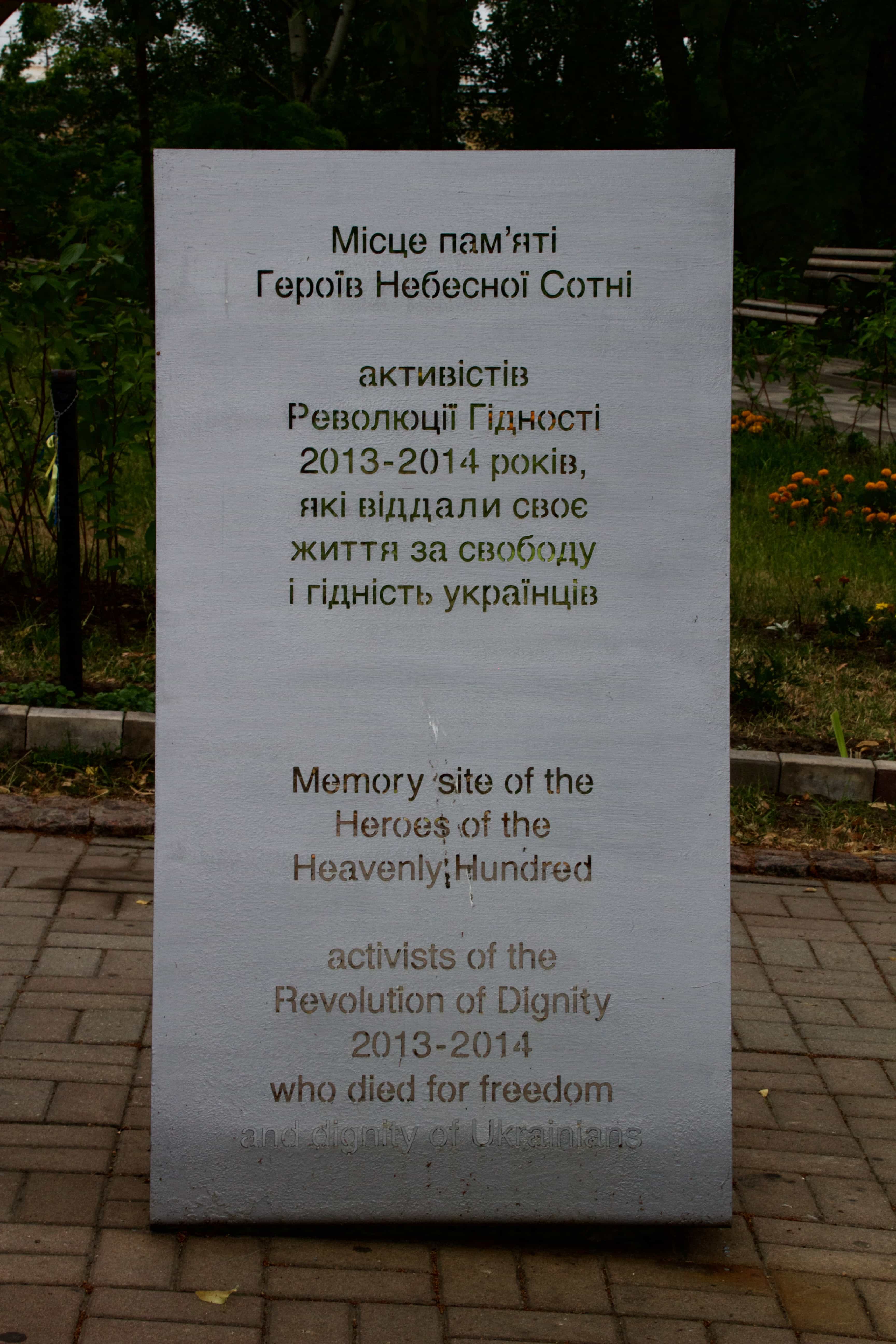 Having said that, Kiev is an interesting city with quite the mix of cultures. If you have one day in Kiev, be sure to see the following sites:

The Independence Monument was constructed in 2001, 10 years after they gained their independence on August 24, 1991. Standing at 200 ft (61m) the victory column stands tall and is topped with a bronze statue of the goddess Berehynia with a rose branch in her arms. 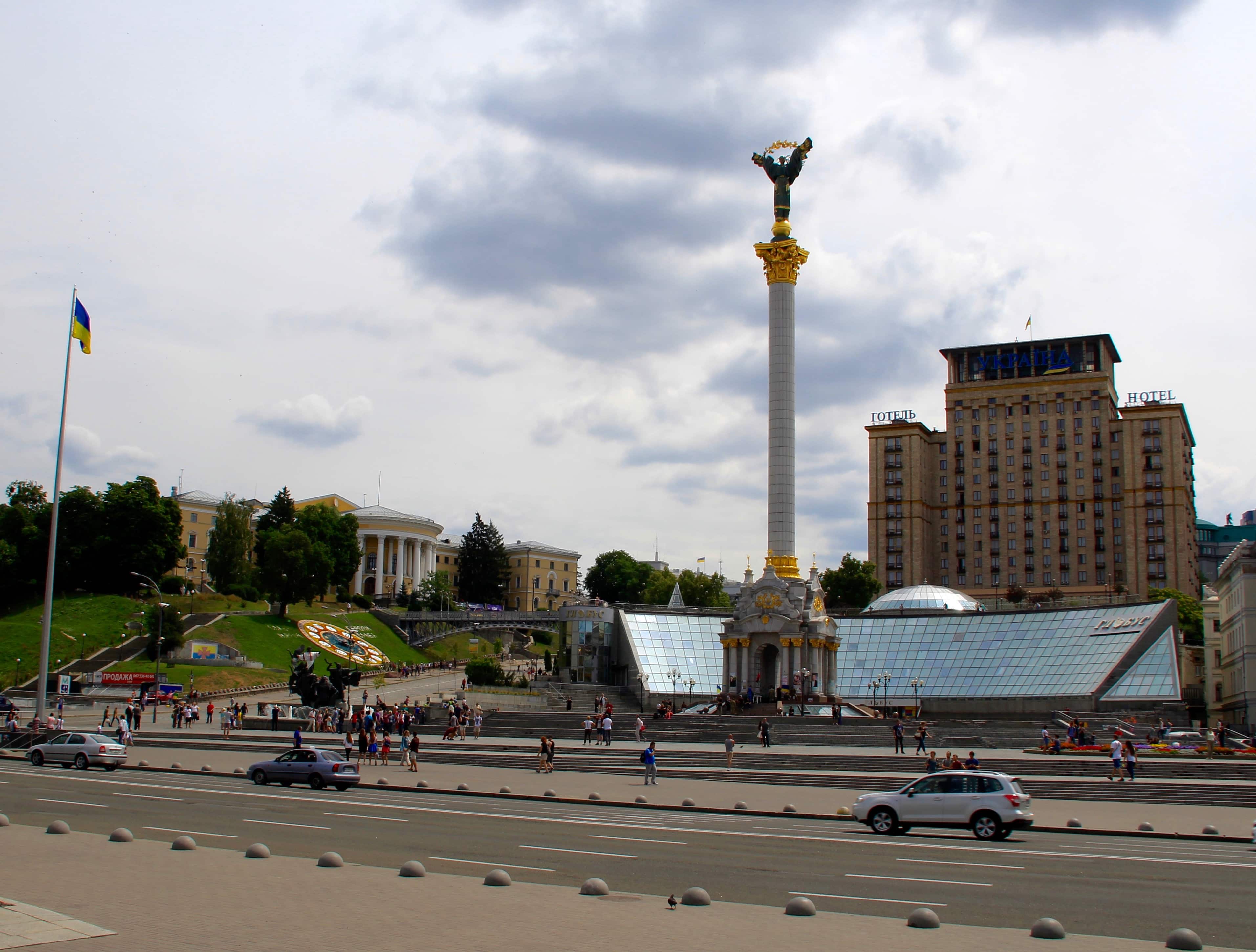 The gray Monument of Founders of Kiev pictures three brothers and one sister.  Kyi, Shchek, Khoryv, and Lybid to be precise. Some believe that Lybid is not their sister, but rather a woman whom they all loved. 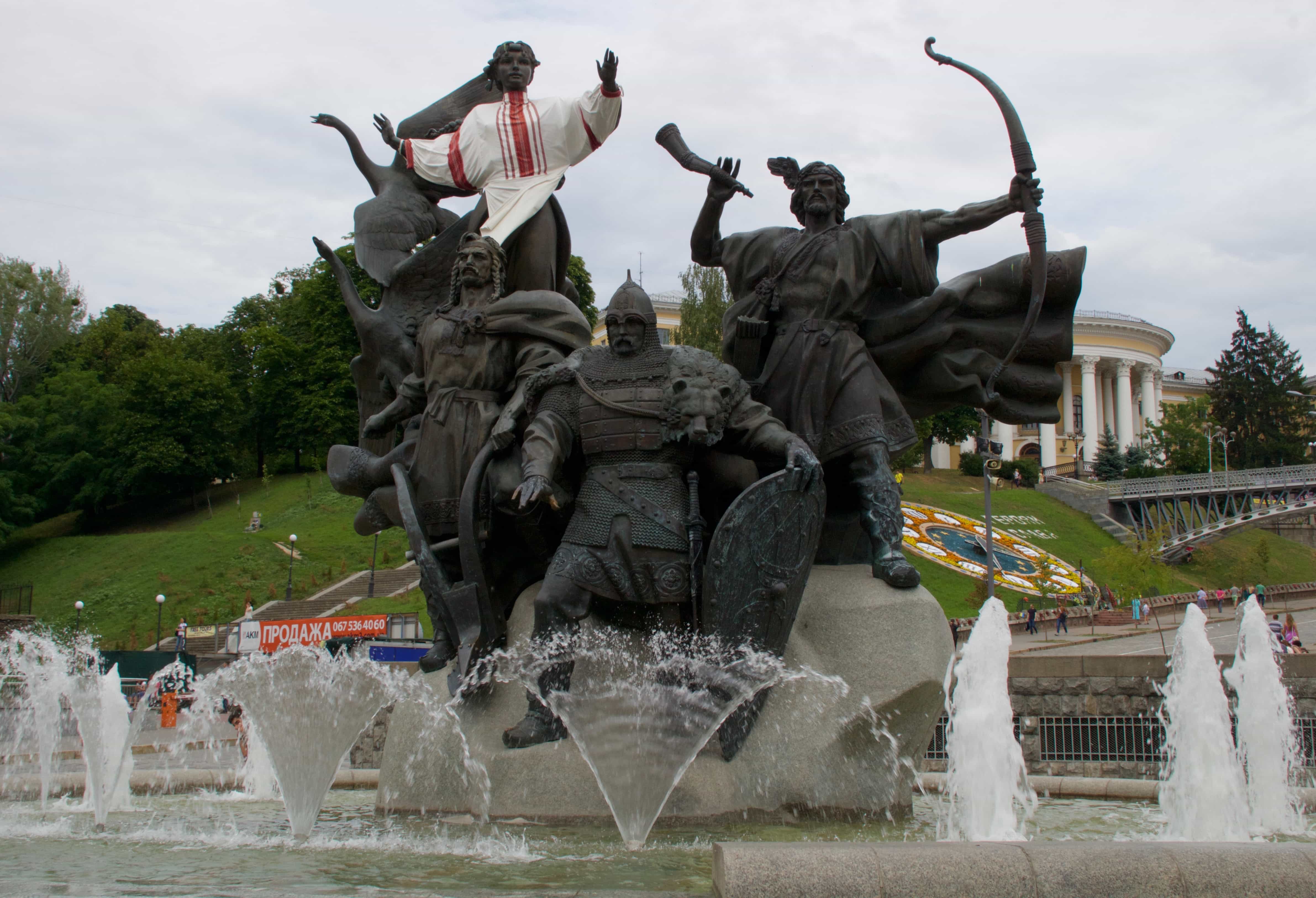 This hotel was called “Moscow” under the Soviet Union. To this day though, each floor has its own babushka that gives you your room key just as they did in the days of the USSR. 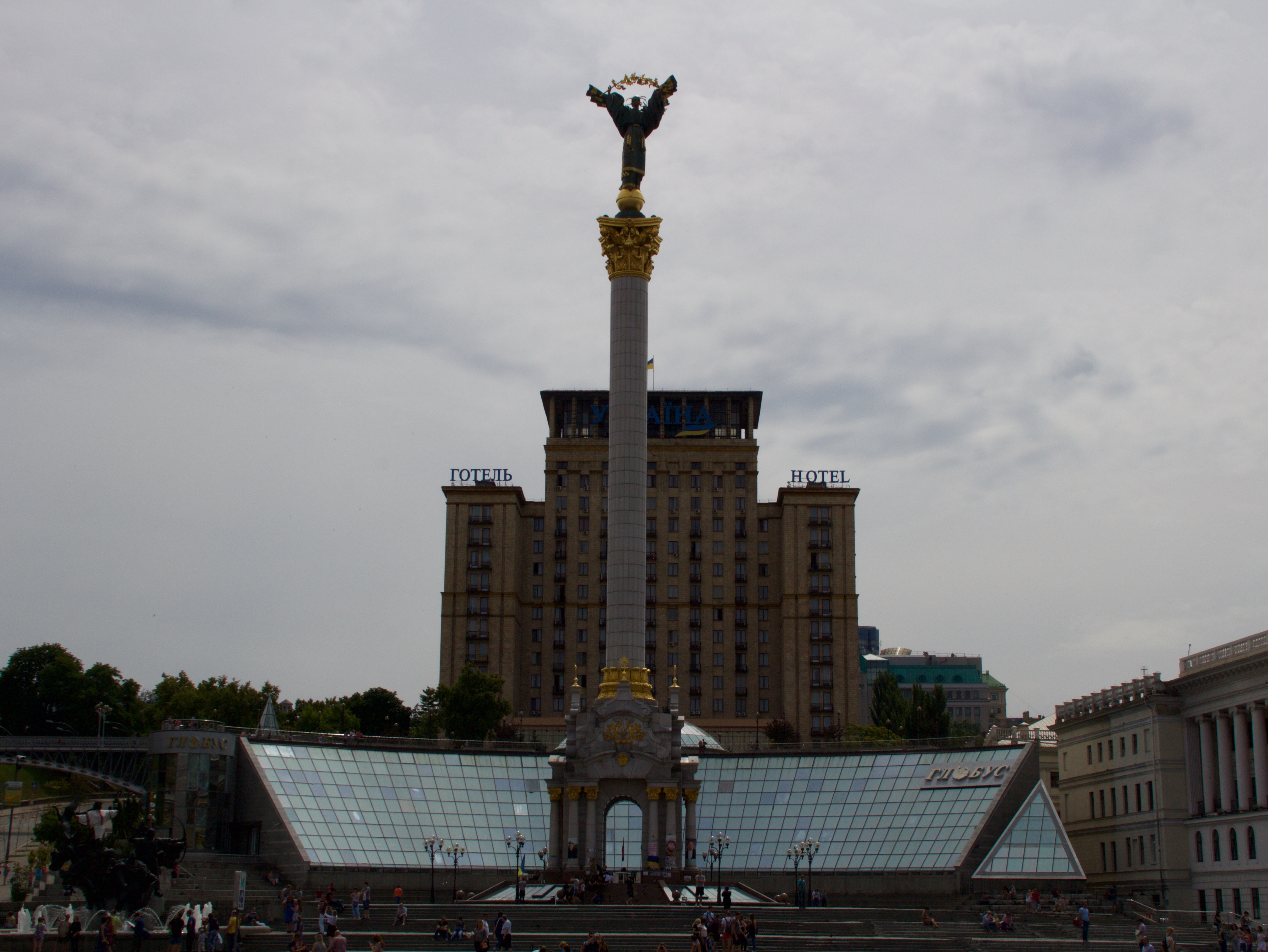 4. Heroes of the Heavenly Hundred Alley

While strolling down this main street off Independence Square, you will see portraits of those who gave their lives in Euromaidan 2014. Where the photos are tied to trees is supposedly where said person was killed. It’s a chilling stroll to say the least. 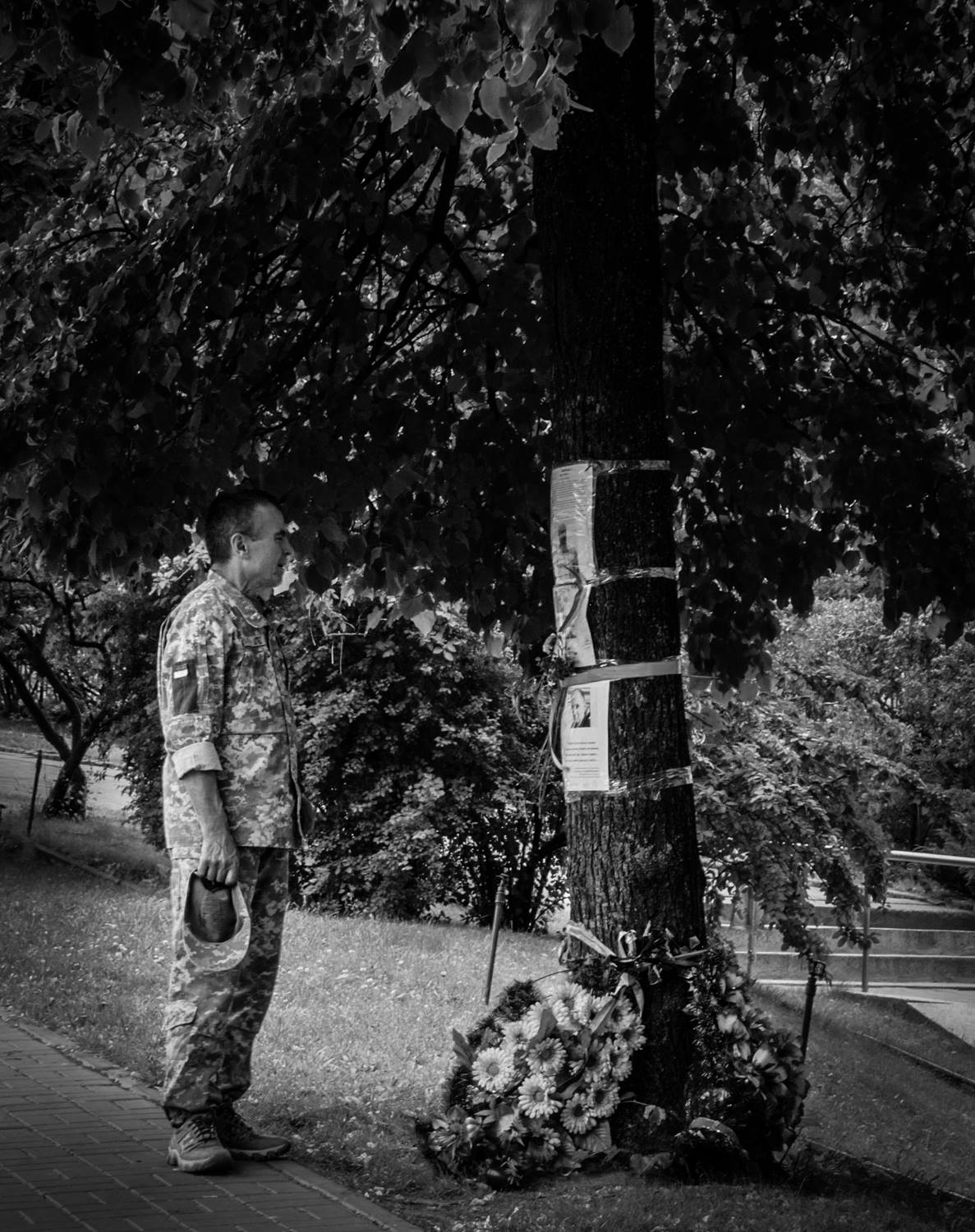 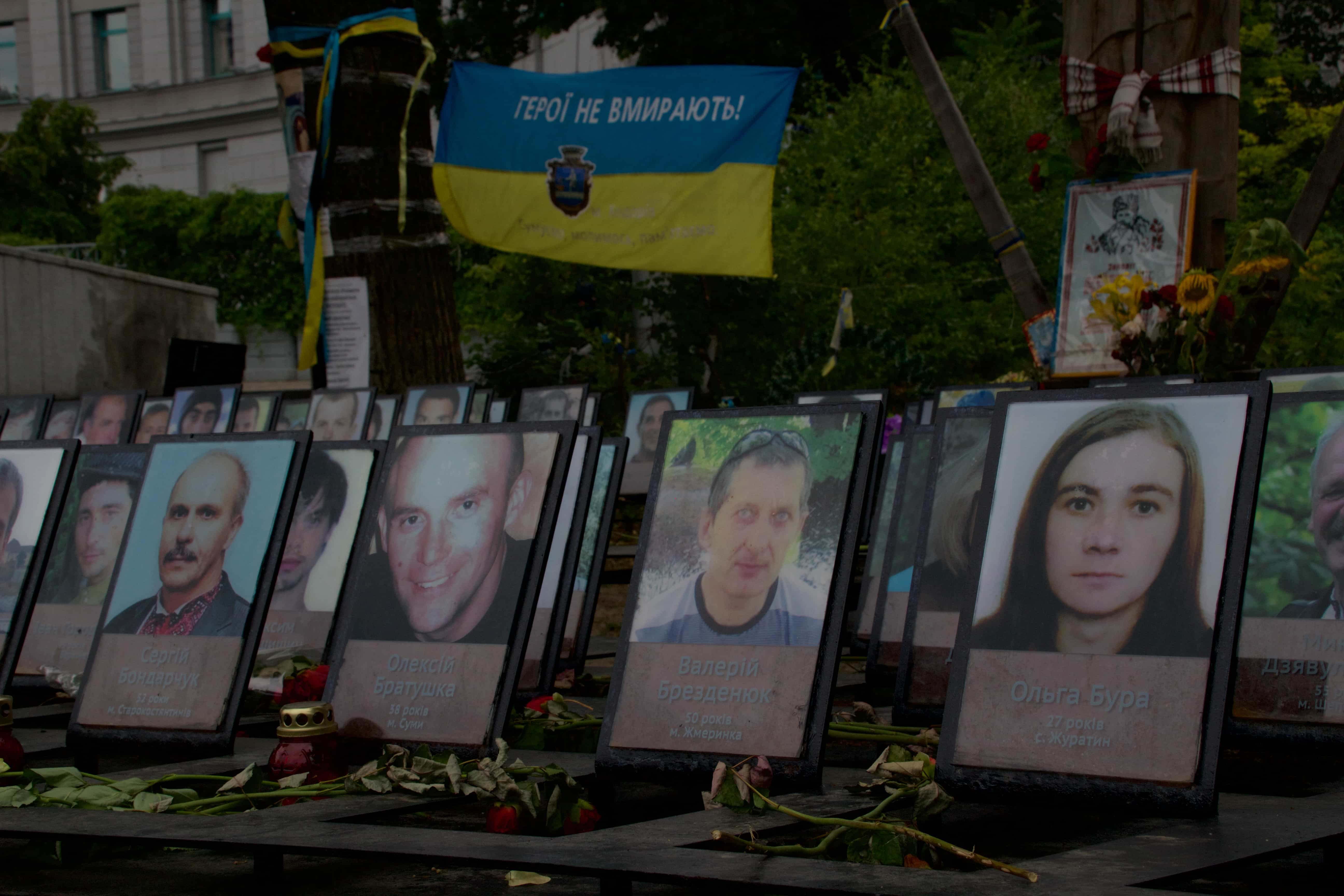 There are plenty things to see outside of those in vicinity of Independence Square too. Much of the architecture is still from the Soviet times; the overbearing presence of Soviet-styled buildings is meant to show that people are so small in comparison to politics.

St. Michael’s Golden-Domed Cathedral and Monastery complex was originally founded in 1108. The grounds consist of the Cathedral, Refectory of St. John the Divine, the Economic Gates, and the Bell Tower. Unfortunately, the original Cathedral was destroyed by the Soviets in the 1930s, as they were an atheist country; it was, however, reconstructed in 1999 after Ukraine gained its independence. 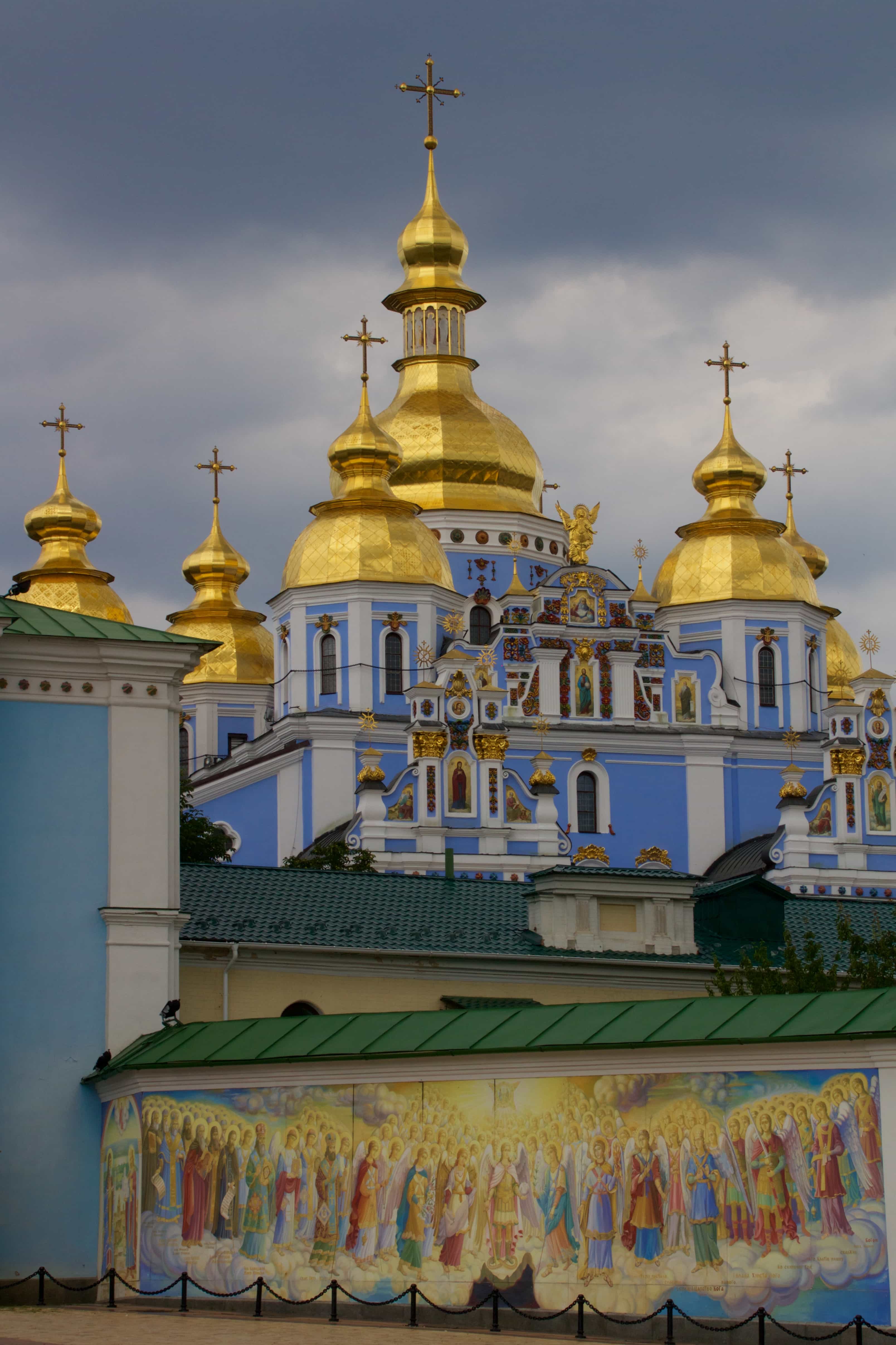 Named after Turkey’s Hagia Sophia, St. Sophia’s Cathedral is one of Kiev’s most well-known landmarks. It was also Ukraine’s first UNESCO World Heritage Site. Construction began in the 1000s, but it took about two years to complete the complex. Inside the church, one can find mosaics and frescos from the 11th Century! 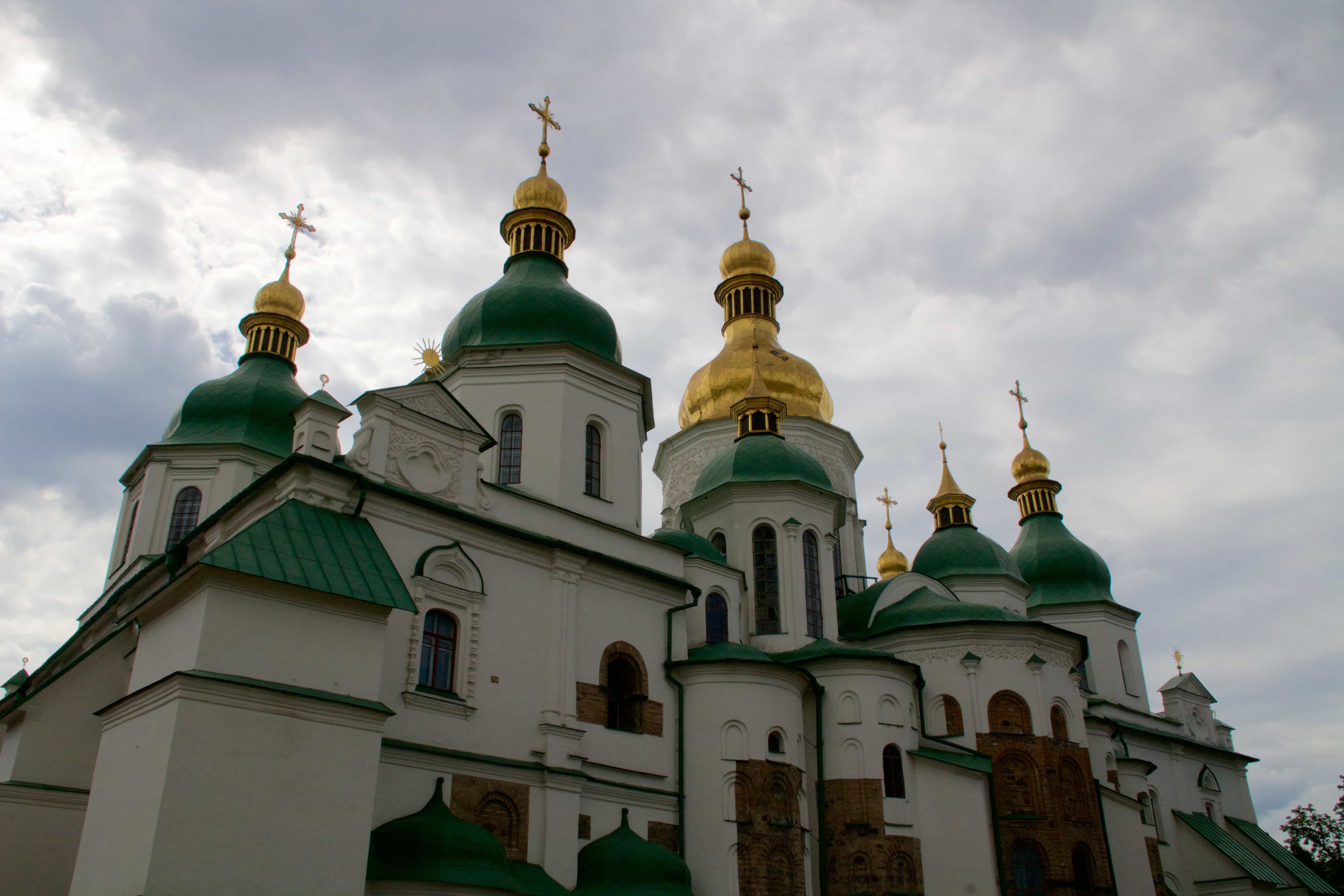 The friendship arch is one of the last remaining communist monuments left in Kiev. It illustrates the unification of Russia and Ukraine under the USSR. As of this year, the Ukrainian government plans to destroy the arch and construct a memorial to those who died in the Russian-Ukrainian war. Aside from the interesting monument, there’s also a fantastic viewpoint over the east bank of Kiev. 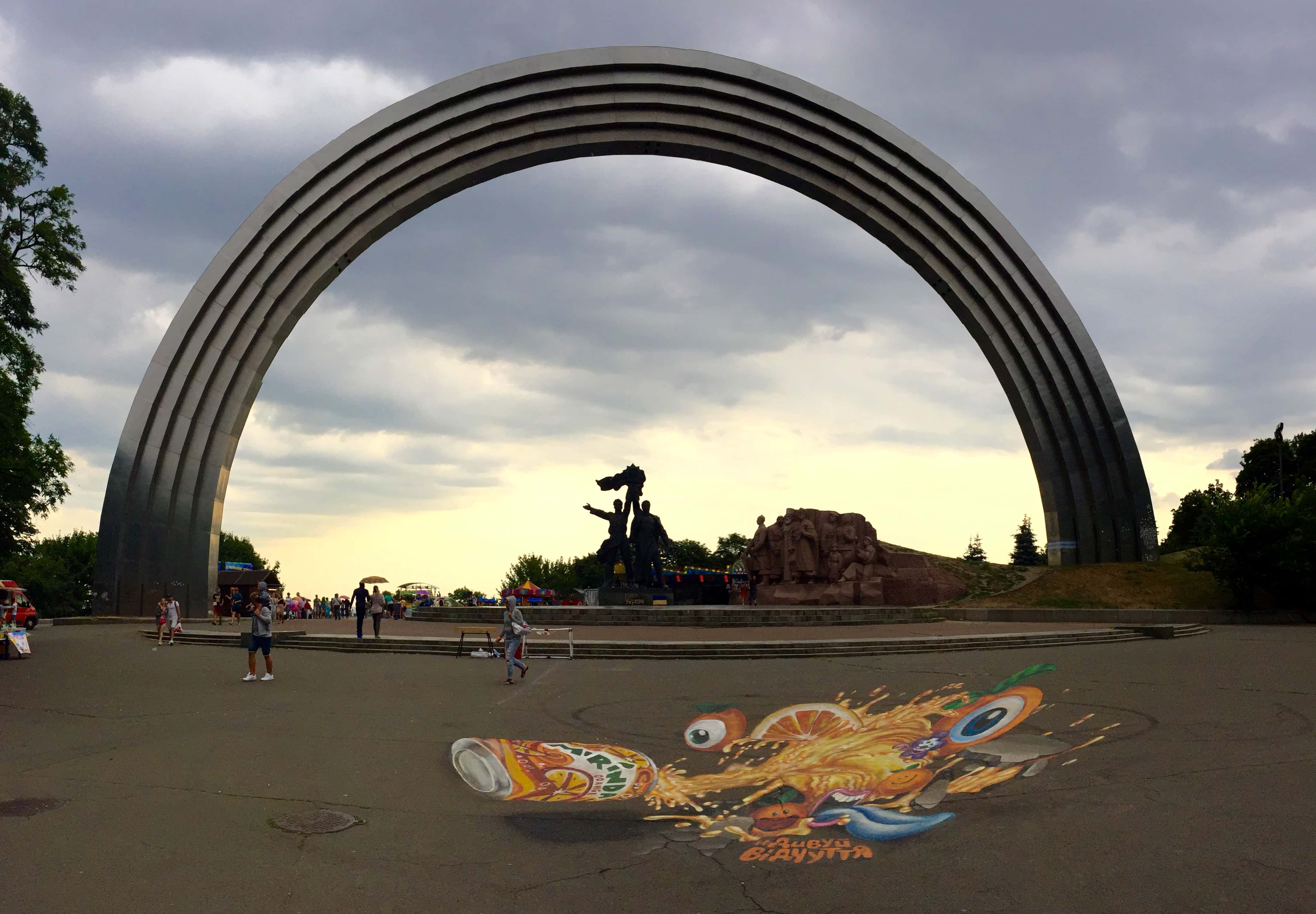 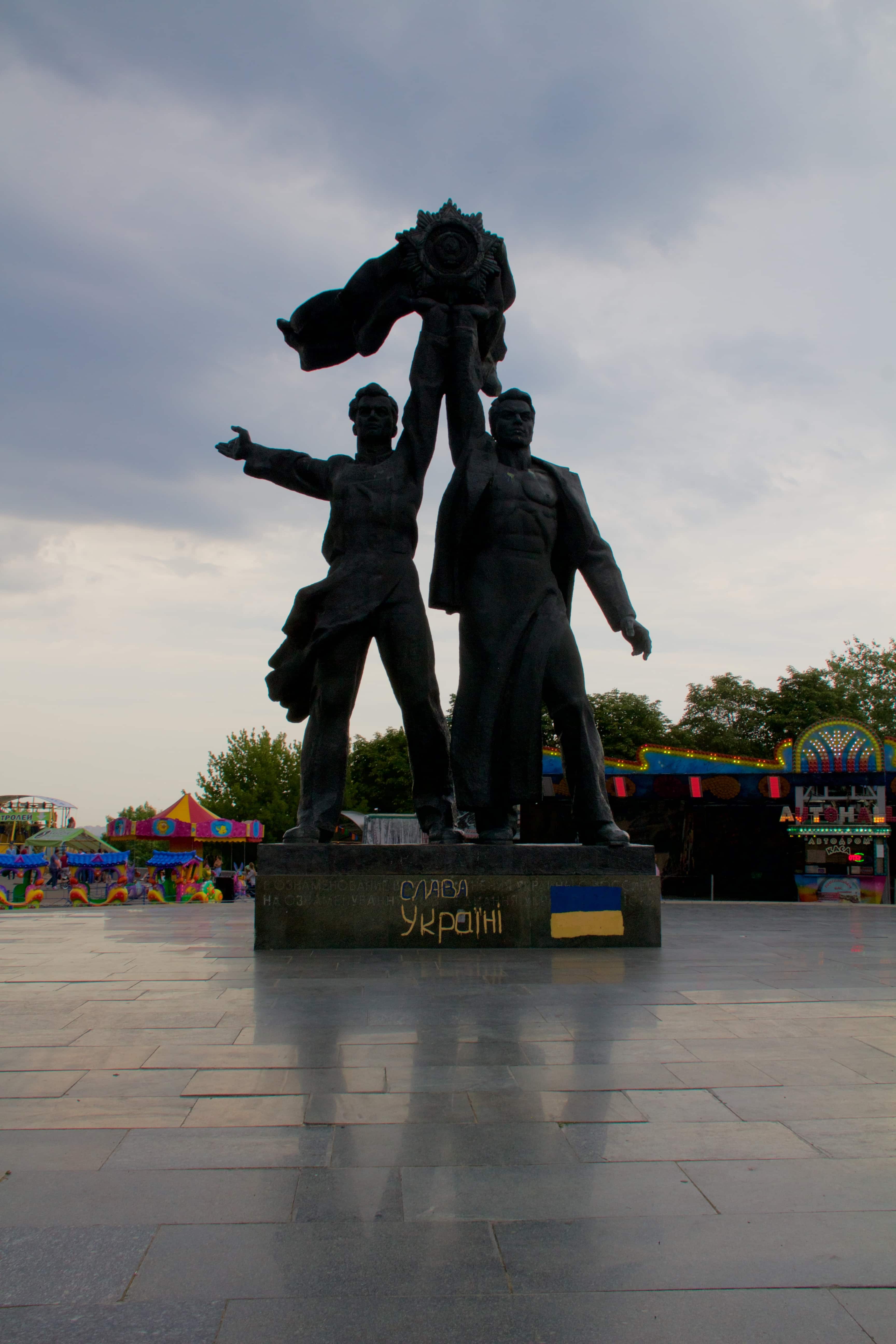 This building was one the USSR’s headquarters in Ukraine. Standing tall with many columns, the Ministry of Foreign Affairs once had a hammer and sickle carved into the building’s facade. There is now the Ukrainian Coat of Arms on the top of the building, with the Ukrainian word for “freedom” hidden with the symbol; the coat of arms itself looks like that of an eagle. But I forgot to take a photo of it, whooooops!

Landscape Alley was a project for children created in 2009 with an Alice in Wonderland type theme. It’s quite weird to be honest, and the giant-sized Alice looks a bit drugged if you ask me. It’s definitely a quirky thing to check out. 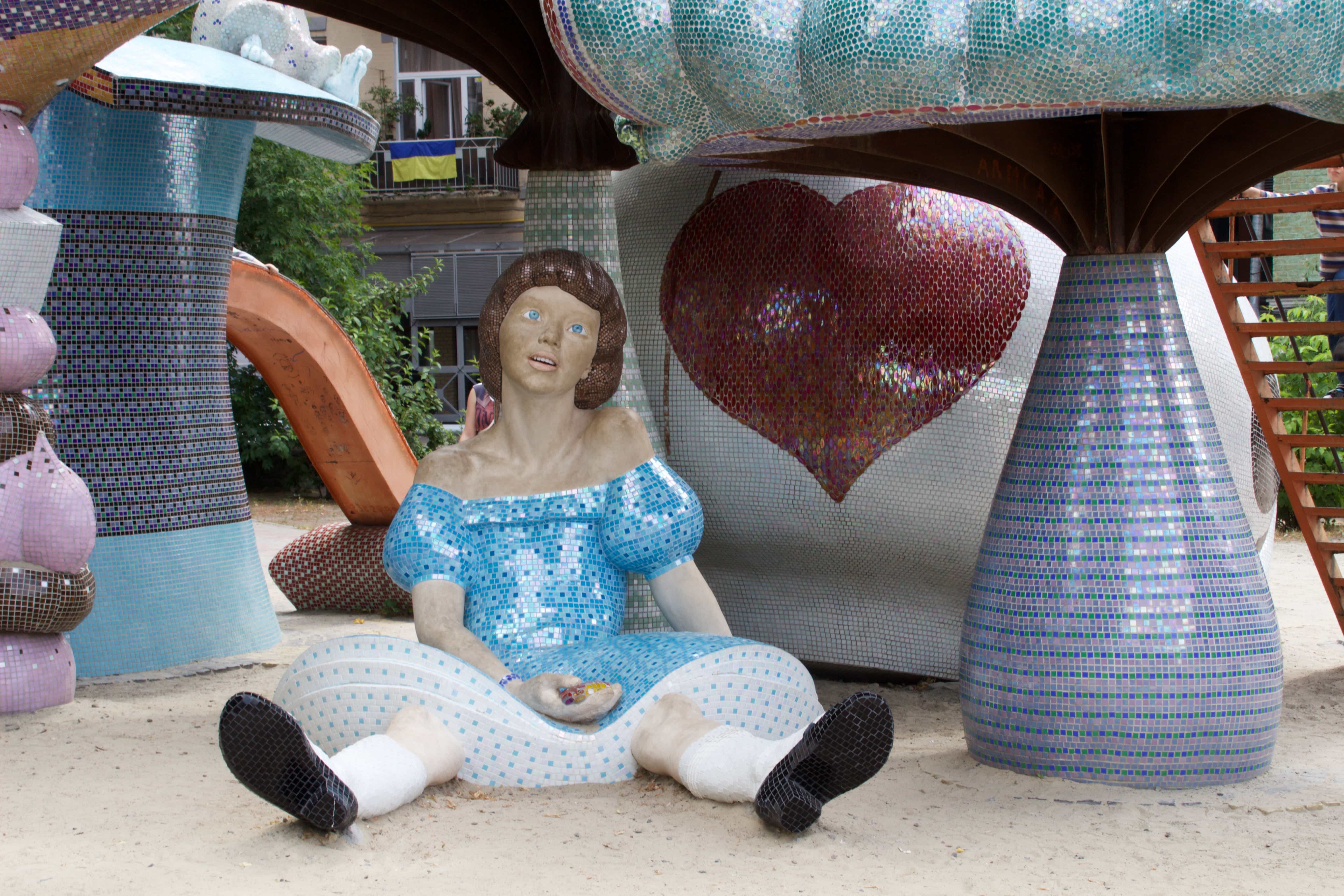 This gate was once the main gate to the fortified city of Kiev in the 11th Century, The gate was originally an entrance for the rich and they had to pay one gold coin to enter — hmmm I wonder how the gate got its name?! The dome on top of the gate itself is a very small monastery. In front of the Golden Gate, there is a statue of Yaroslav the Wise holding a replica of St. Sophia’s Cathedral in his hands. 5FT Fun Fact: It is said that Yaroslav had ten children, and it appears he still does, as there are always many children climbing on his statue! 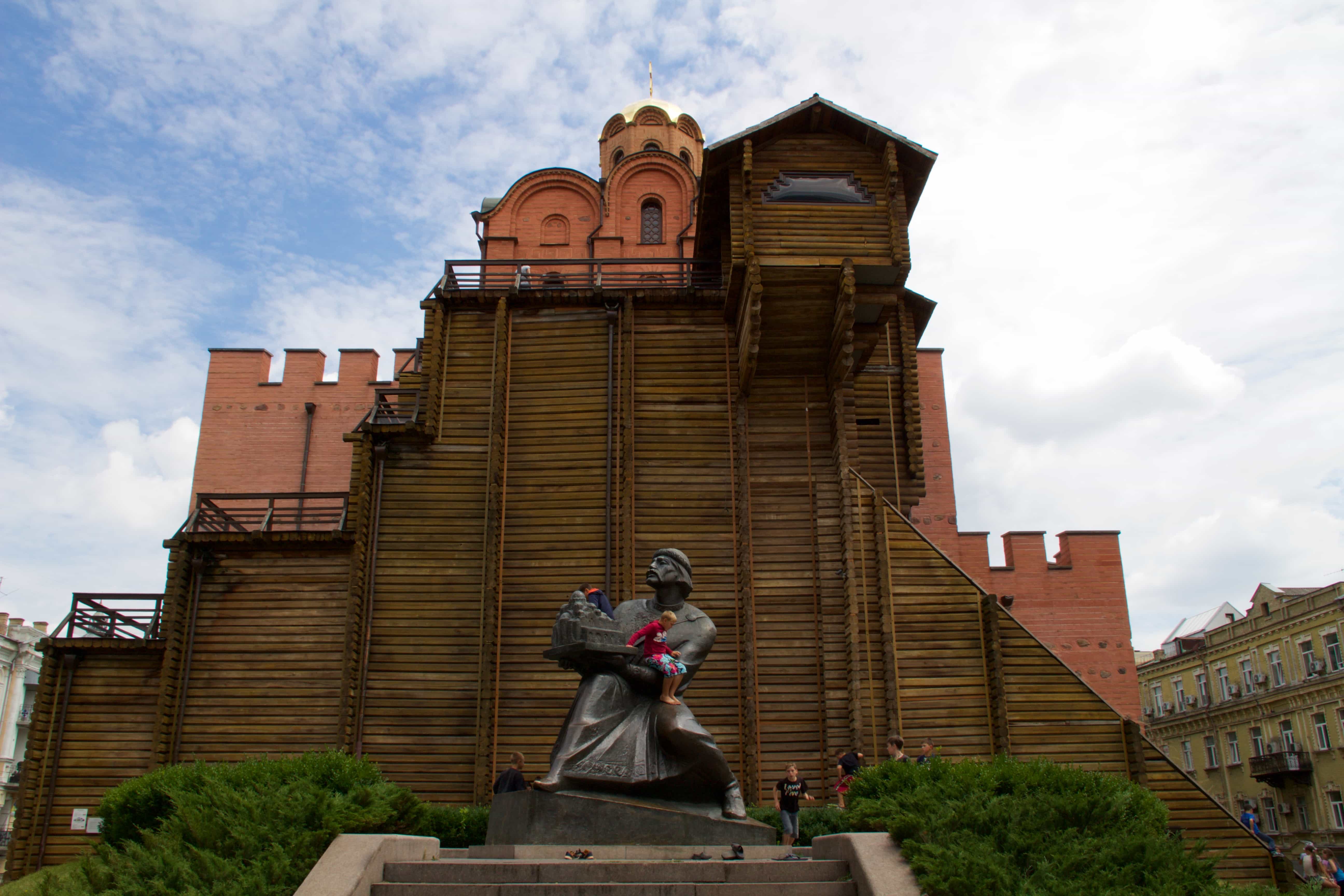 It’s important to remember that Kiev is a big city when figuring out your accommodation. Ideally, if you want to access most of the city by foot, you should try to stay near Independence Square. In searching for a place nearby, we found Ballet Hostel — not only was it affordable, but it was two minutes walking from the Square. 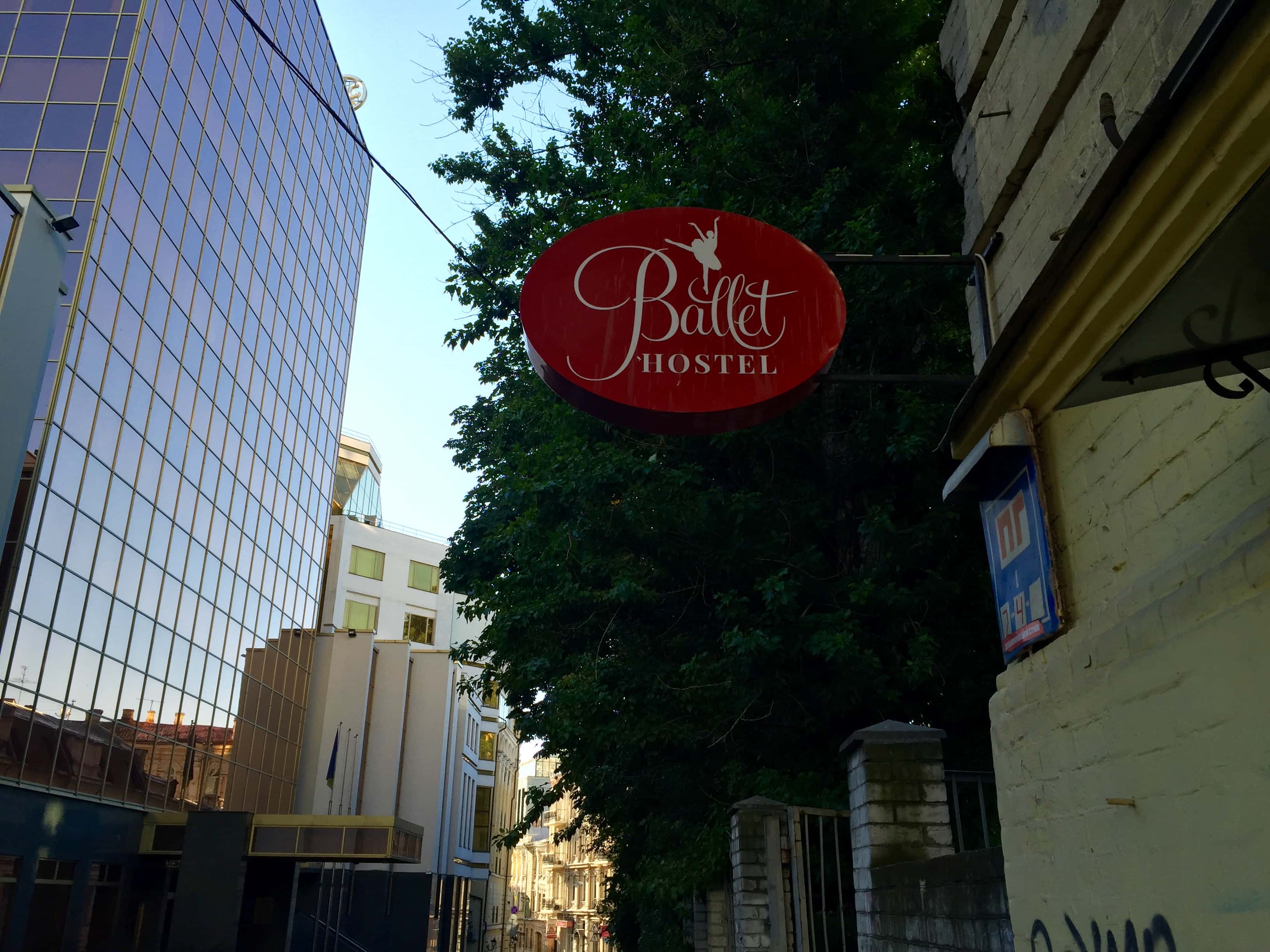 Within Independence Square itself there are plenty of monuments to see, cheap places to eat, and the metro station. Aside from the superb location, the staff was incredibly kind and helpful. While it’s a very small hostel, it was quiet and relatively spacious. Each morning, a typical Ukrainian breakfast was served; it did take some getting used to, but being served traditional food is always appreciated. If Ukrainian food isn’t your thing at 9am, feel free to cook yourself up some food in the kitchen. For someone looking for an quick and easy place to stay, Ballet Hostel would be it.

Looking for 10 Important Sites in Kiev? Pin It Please! 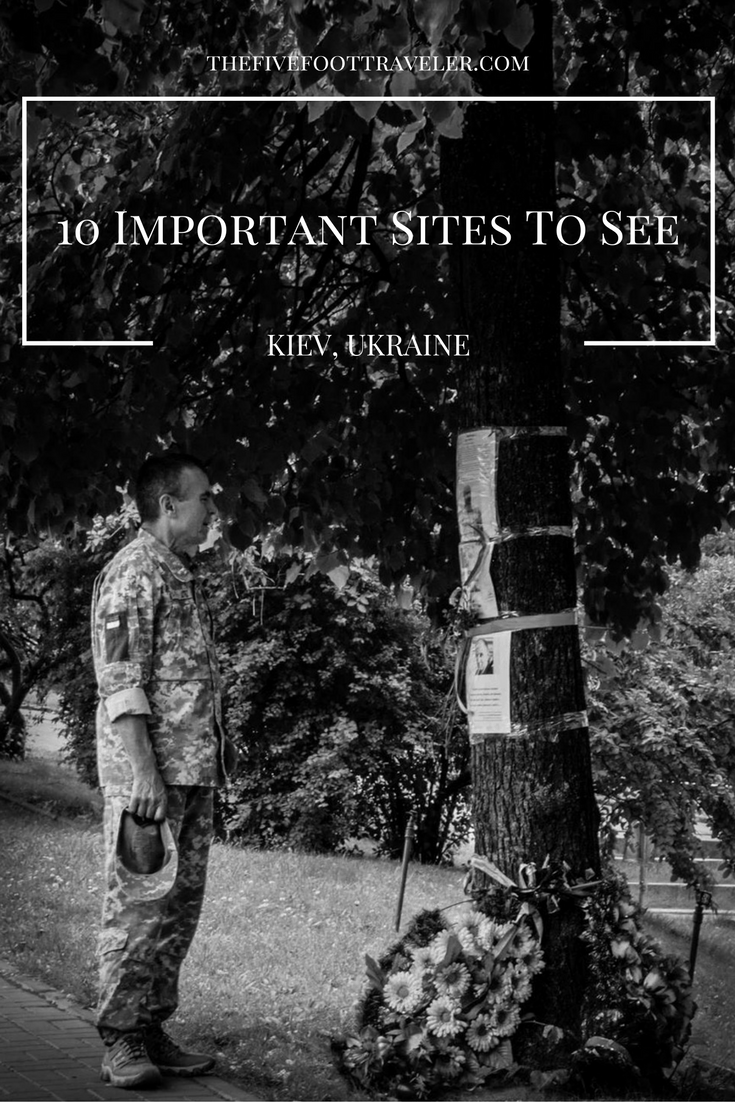