The next morning we went to the Gadot Lookout and Memorial, which was the site of a Syrian military base until 1967. We learned that Eli Cohen, an Israeli spy that infiltrated the Syrian government under the name of Kamel Amin Thaabet, helped enable Israel to easily capture the Golan Heights during the Six Day War. Feigning sympathy, Cohen convinced the Syrian military generals to plant Eucalyptus trees around their bases in order to provide shade from the blazing sun for the soldiers – those huge trees were then used as a target so that, during the Six Day War, the Israeli army knew exactly where the Syrian military bases were when they carried out their air strikes. The Golan was captured within two days. Syrian intelligence eventually caught onto Cohen by tracing his radio transmissions into Israel. He was found guilty of espionage and publicly hanged in the Marjeh Square in Damascus on May 18, 1965; his remains have yet to return to Israel. 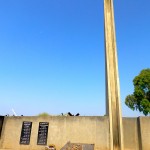 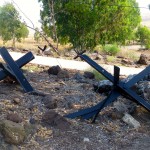 The experience of being at the Gadot Lookout, a base that was also surrounded by mines, was really neat. It was strange knowing that we were standing on what used to be Syrian soil, while looking down into an Israeli valley and left to the mountains of Lebanon. 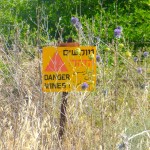 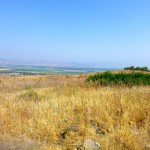 Following the lookout, we hiked through a canyon to Nahal Zavitan. The hike began on a flat path with non-descript surroundings. of a sudden we reached a canyon that was so green and beautiful; the vegetation was amazing. After virtually scaling rocks and walking in little caves, we reached a beautiful oasis with a waterfall and pretty pink flowers. It was hot. We jumped into the river and swam to the waterfall. So refreshing. 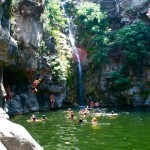 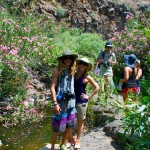 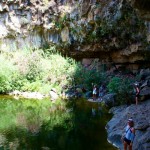 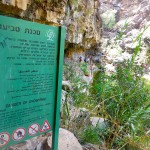 Before we were to hang out by the Sea of Galilee, we went to Mount Bental (an inactive volcano) for a panoramic view of the Golan Heights and Mount Hermon. The view was stunning as we looked out into three separate countries: Israel, Syria, and Lebanon. On certain days, one can see and hear explosions happening in Damascus during this horrid civil war. Mount Bental was the site of one of the largest tank battles in history during the 1973 Yom Kippur War, and a key strategic point for the IDF due to its advantageous viewpoint. It was during this war that the Syrians attacked the Golan Heights with 1,500 tanks and 1,000 artillery pieces. Israel only had 160 tanks and 60 artillery pieces. It was the Syrians who retreated in the end; Israel won the Golan. The expansive valley stretching between Mount Bental and Mount Hermon became known as the Valley of Tears, as it was the major battle site during the Yom Kippur War. 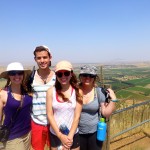 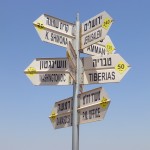 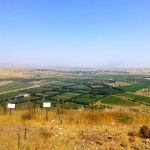 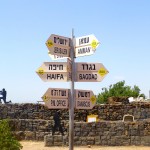 That afternoon we were taken to the Cocohut Beach Resort in Tiberias on the Sea of Galilee to go tubing and relax for a while. 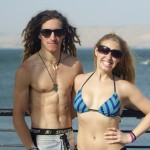 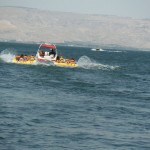 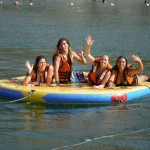 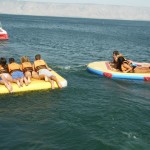 Our evening ended with a guest musician – Gilad Vital of Shotei Ha’nevu’ah and Pshutei Ha’am – who told a fascinating story of his youth. Through his music, he discussed his family story. We learned that his grandparents were separately taken to Auschwitz (and killed) during the Holocaust, leaving behind two young children: his father and his aunt. Their babysitter went on to put the two children in a convent so that they would be saved. They were saved, and Vital was born. His songs were emotional, full of both sorrow and passion.