When people think of Fjords, they instantly think of Norway. What people fail to realize is that fjords can also be found in Montenegro, of all places! I had read about this tiny country, and specifically Kotor, on one of those “50 Hidden Gems in Europe” articles, and instantly added it to my list of places I had to visit. I didn’t know that I’d get there so soon!

After hitching a ride with a Russian couple we met in Albania, we arrived in Kotor late at night. Kotor is a fortified town, and absolutely beautiful. Due to its authenticity, it has been deemed a UNESCO World Heritage Site.

Upon arriving in Kotor, we walked to Montenegro Hostel, home-base for three nights. The hostel was actually the first building within the old town walls to be turned into a hostel, and is thus as old as the town itself. The hostel was perfectly located in the walled Old Town of Kotor, situated next to an affordable mini-market, and surrounded by plenty of fantastic restaurants. We were greeted with enthusiasm, and shown our room. Though this hostel is as authentic as the town itself, they have thankfully added comforting amenities such as air conditioning. First things first: food! We hadn’t eaten all day and were quite hungry, but luckily Montenegro Hostel had a great kitchen setup.

We cooked up some pasta and sat in the dining room/common area, looking out the window that overlooked the fortress at night. Quite a view indeed!

The following day, we decided to go on Montenegro Hostel’s Big Montenegro Tour, an all-encompassing, 12-hour tour where you cover 30% of Montenegro. Well that sounded pretty nice to us! We booked the tour for 35 euros and were picked up at 8:30am on the dot by our guide, Jelena. This is what we saw:

This is the old Austro-Hungarian road that connects Kotor to Cetinje. It was built in 1884 and still has the original rock guardrails. There were 25 long, windy serpentines and, upon reaching the top, the road offers stunning views of Montenegro. Today, the road still serves as the only connection between Kotor and Cetinje. 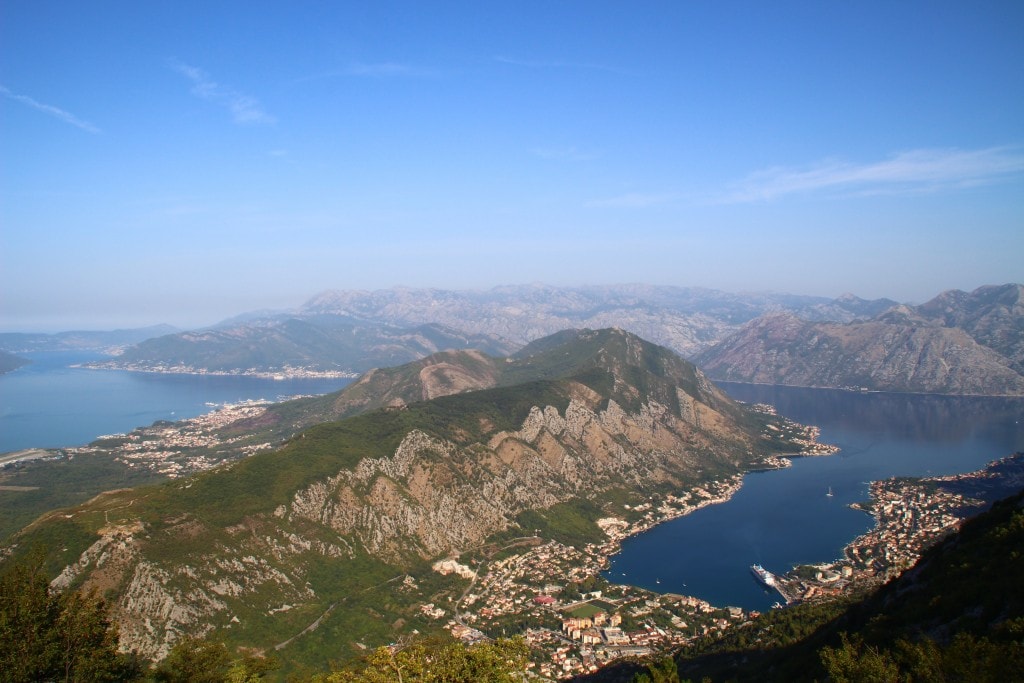 After letting our stomachs settle from the windy roads, we made our way to the small village of Njugesli to try some Montenegrin prosciutto and goat cheese. Many residents in the area make their own prosciutto, and their families have been making it for centuries so, clearly, we had to try it! For 4 euro, we bought a prosciutto sandwich – with homemade prosciutto, cheese, bread, and a drink. While it was delicious, the sandwich was a bit skimpy on the prosciutto, offering only one thin piece. In retrospect, Philip and I probably would have just shared one sandwich solely to try the prosciutto, not to have it as a breakfast replacement. 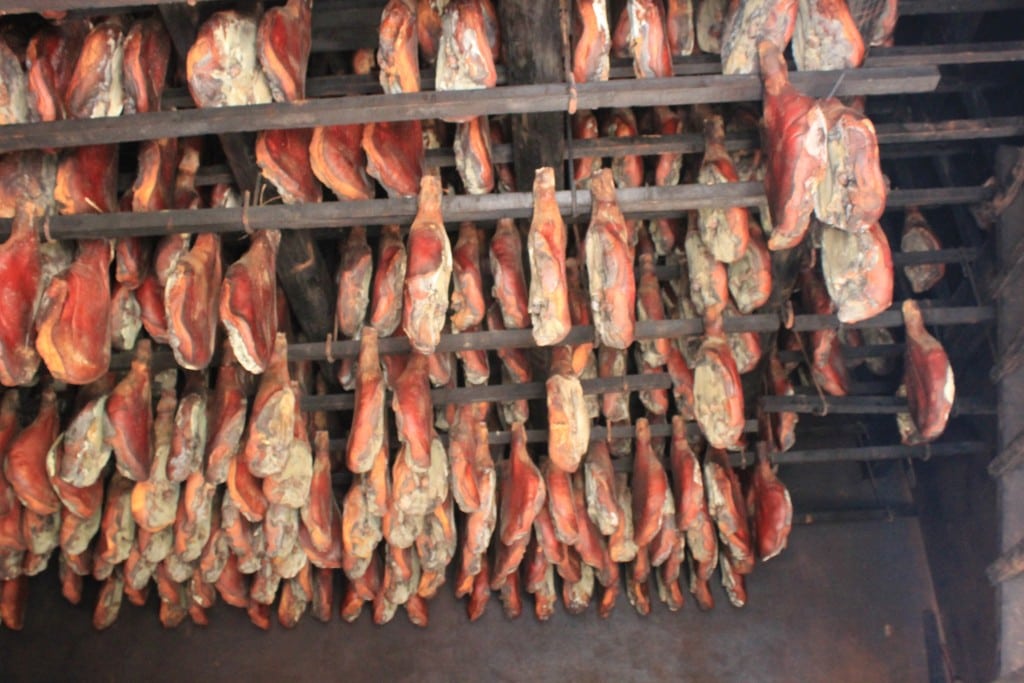 From breakfast, we made our way to Lovcen National Park, home to 620,000 people. It was a 2 euro entrance fee, but well worth it. Within Lovcen resides the highest Mausoleum in the world, at 1,650 meters. The mausoleum was erected in 1974 for Petar II Petrović Njegoš, a Montenegrin ruler, writer, and philosopher who gave a lot of money to education. In fact, he was so beloved that there is a marble statue of him at the entrance to the Mausoleum, and it weighs four tons!  Originally, the Montenegrins didn’t want the statue in place because they thought it was too “self-worshipping,” but then they realized that it brought quite a bit of tourism and accepted the statue. It cost another 1.50 euro to enter the Mausoleum, and the Mausoleum itself looks like any other Mausoleum (in my opinion), but the views of the surrounding areas make the price well worth it! On a clear day, you can see almost half of Montenegro. After climbing the 461 steps up, the views are that much more welcomed. 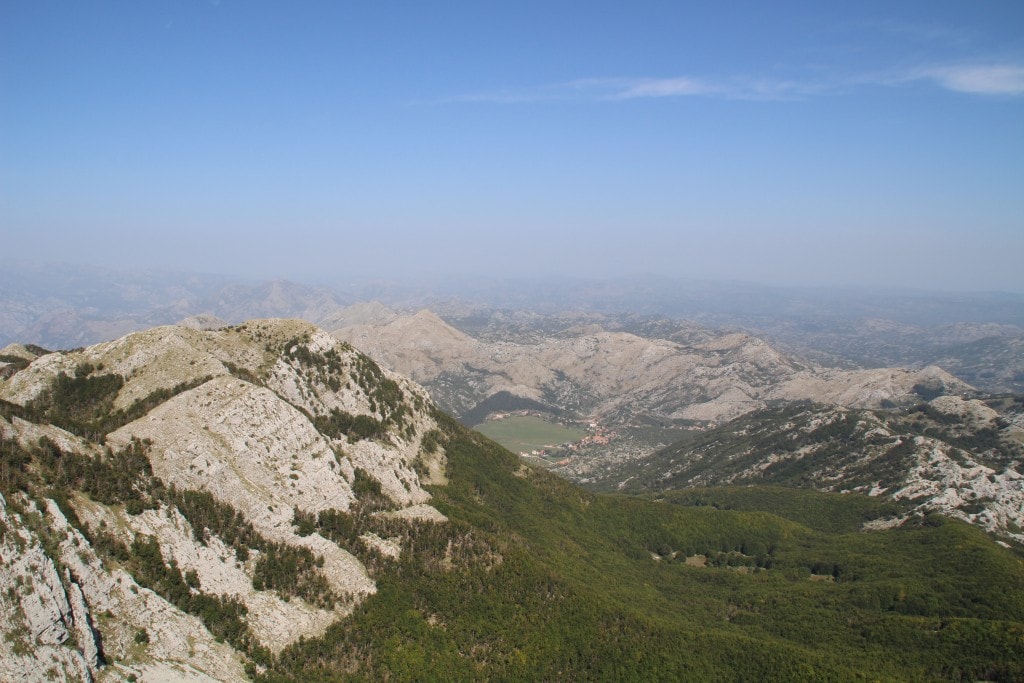 We then went to Cetinje, the old royal capital of Montenegro and the current Ministry of Culture; it was established in 1482. Most of the houses were made during the rule of Prince Nikola in the late 1900s; Prince Nikola was responsible for liberating Montenegro. In fact, we even saw the house in which Communism was born in Montenegro. Ironically, the house collapsed in on itself and wasn’t subject to damage from citizens, yet it is the only house on the block that’s in shambles.  Cetinje is full of cute houses, shops, and is home to the only bakery from the pre-war period. The prices still reflect those of the past, at $0.77 per pastry! 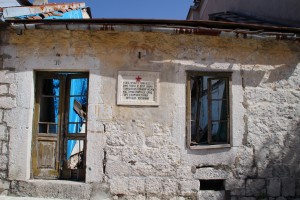 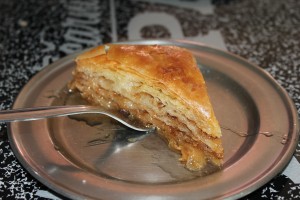 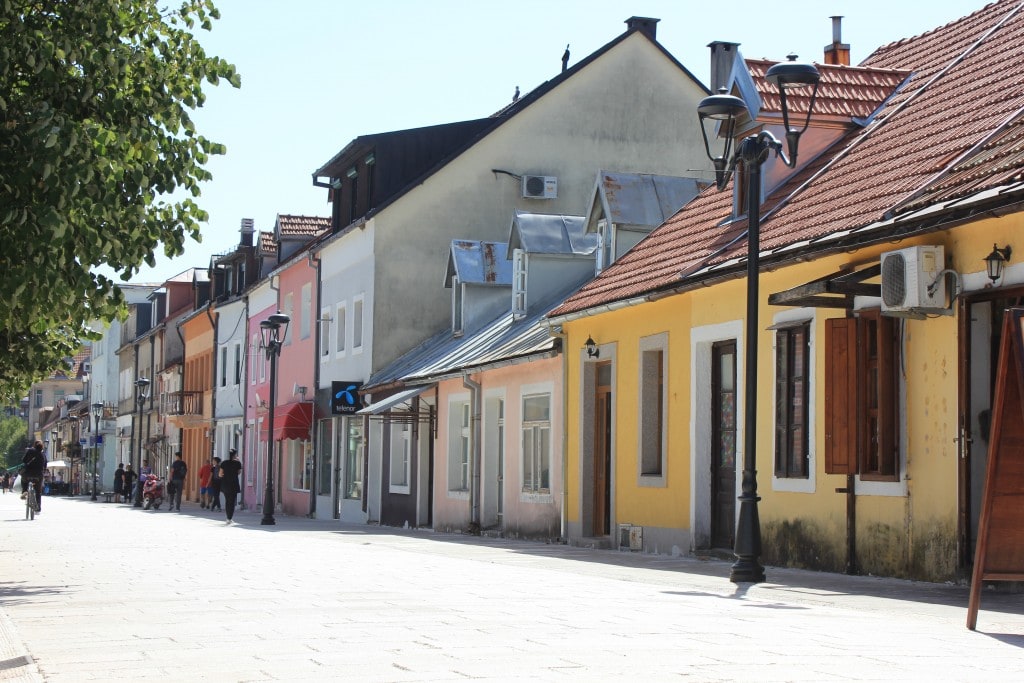 Ostrog Monastery, a Serbian Orthodox monastery built directly into the large rock of Ostroška Greda, is a pilgrimage site for many Montenegrins and foreigners alike. Those making the pilgrimage start at the lower monastery and then climb 3km uphill (barefoot) toward the upper monastery. Once they arrive at the Monastery, they sleep overnight in front of it to complete the pilgrimage – this is typically done on Saturday nights. This monastery was constructed in 1665 and still houses original frescos from the 17th Century. 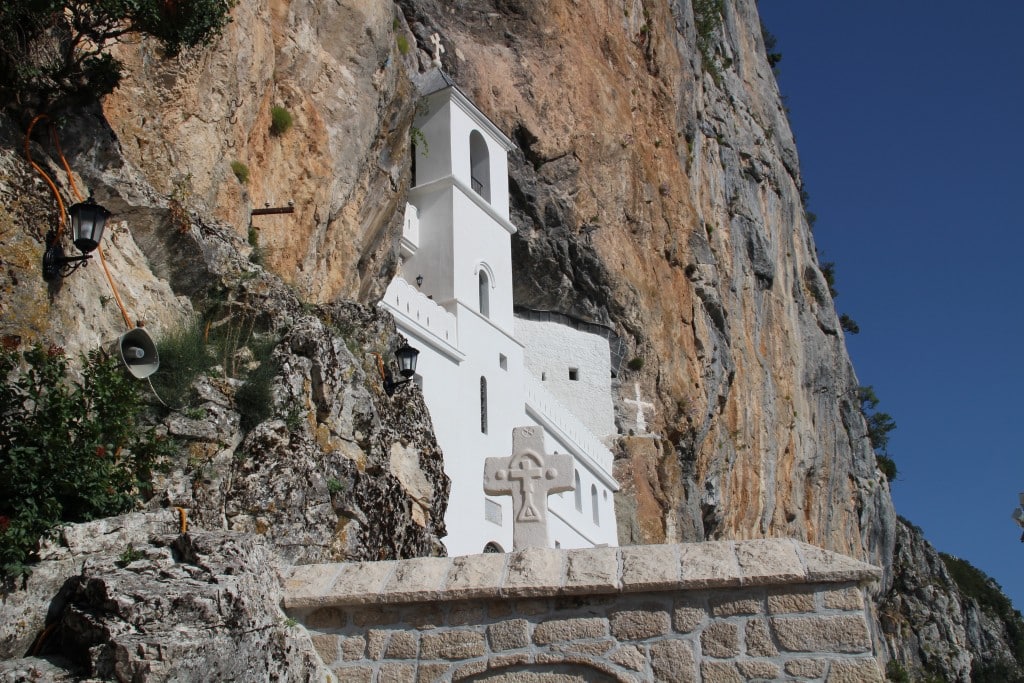 This lake is one of the first things that comes to mind when I think of Montenegro, and I had no idea that I’d be seeing it on the Big Montenegro Tour! Needless to say, I was thrilled when we pulled over for a quick photo stop. 5 FT Fun Fact: About 70% of Lake Skadar is in Montenegro and 30% is in Albania. 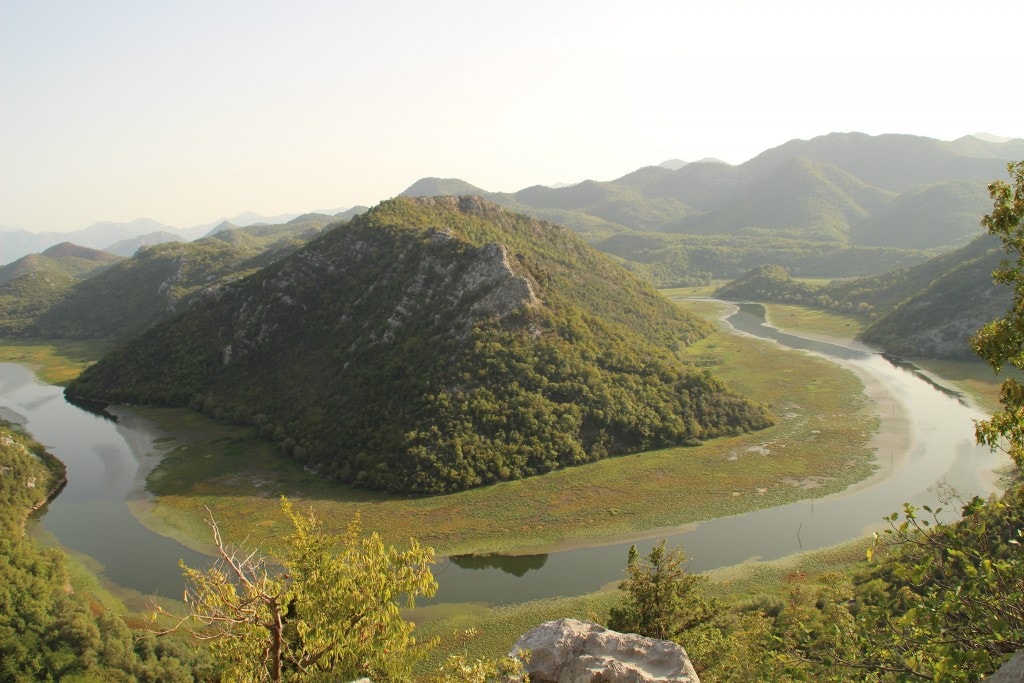 After our brief stop, we went to the River of Crnojevoc for an incredible fish lunch. It is an extra seven euro for the lunch, but it is worth every penny and then some. From the mouth-watering fish soup to the salad to fresh fish, this lunch was a highlight of the tour – our taste buds were surely happy! The River of Crnojevoc, which is not only a river but a town as well, was founded around the same time as Cetinje and used to be the trade center. It was here that Montenegro’s first post office, pharmacy, and printed book came to life. 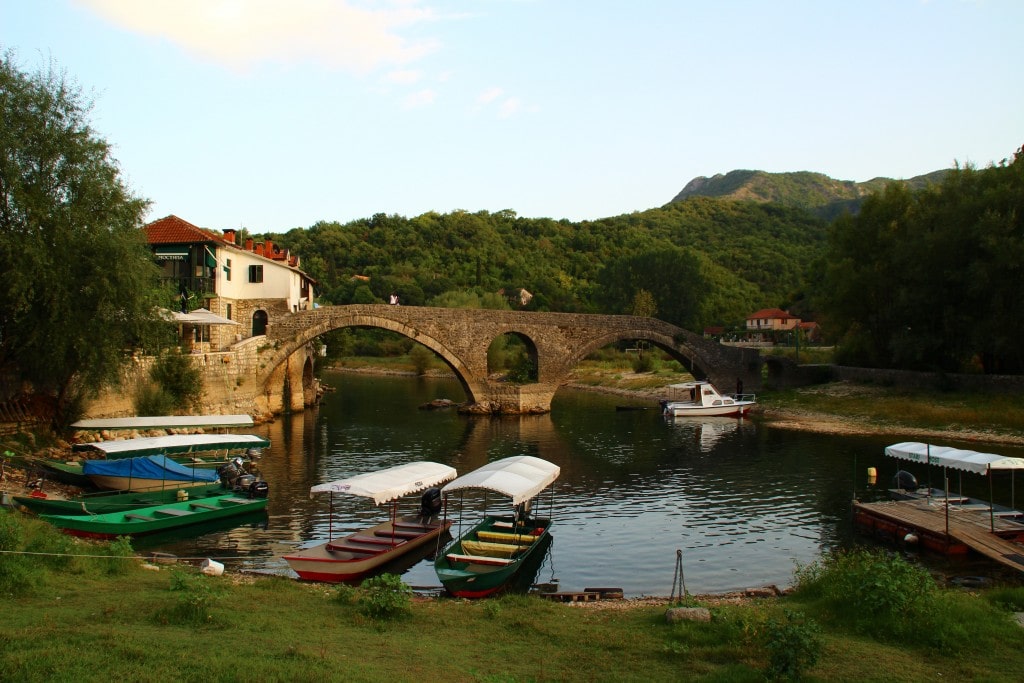 This small peninsula was originally built by Montenegrins to defend against Turkish invasion. Now, the property is an overly expensive hotel complex – we’re talking thousands per night! 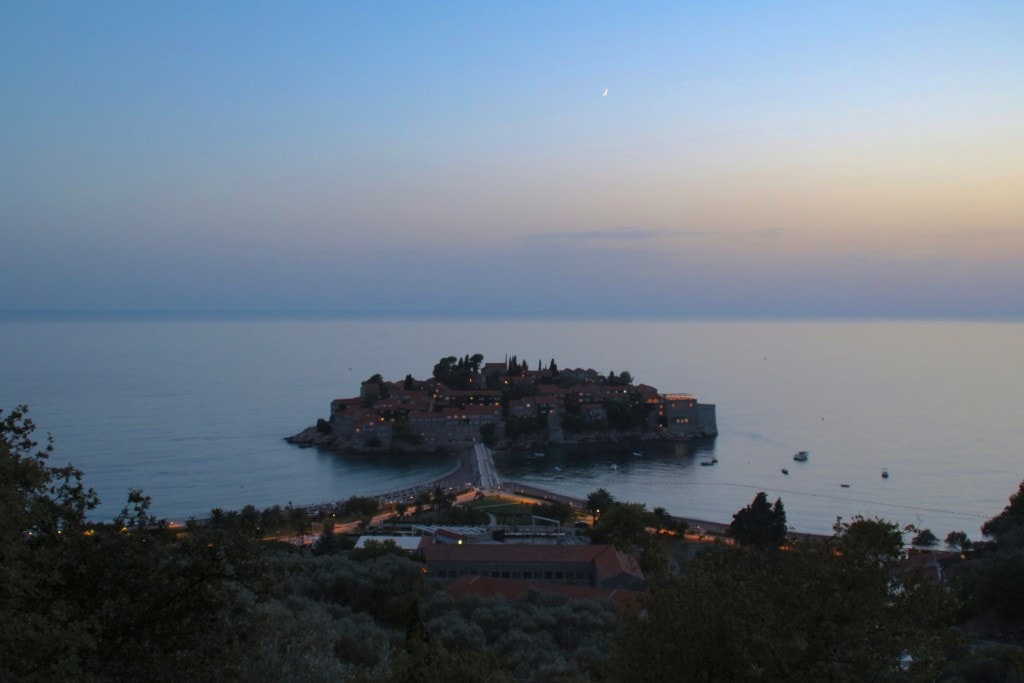 As the sun set, we returned back to Montenegro Hostel, exhausted and fulfilled.

**Special thanks to Montenegro Hostel for kindly offering me a complimentary stay. As always, all opinions are my own.