From Brisbane to Fraser Island (Day 1)

Despite being so close to land, Fraser Island is considered a remote island and can only be accessed with a 4WD car. In fact, the beach itself is classified as a road; general road rules apply, with the speed limits reaching up to 80 kph. 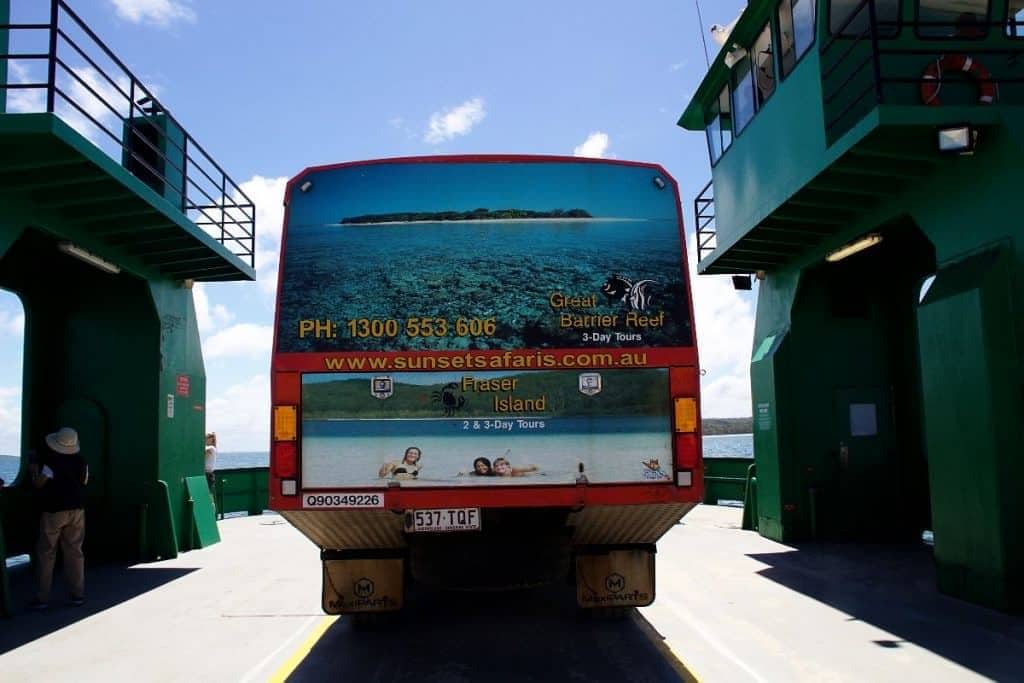 We were picked up in front of Brisbane’s Hotel Jen at 7:15am by Peter, our tour guide, to begin our 200 km northbound journey to Fraser Island with Australian Sunset Safaris. The first two or so hours are perfect for a morning snooze, but once you hit the first part of Great Sandy National Park, you’ll be wide awake! Rather than taking the boring highway to Rainbow Beach, our lunch stop, we went into 4WD mode and bounced down the beach. After what felt like ages bumping over the sand, we came upon Rainbow Beach out of seemingly no where! Along the way, we stopped to check out Red Canyon and learned about the colored sands that make up the geology of such canyon; throughout many thousands of years, these grains of sand become stained by the iron-rich minerals in the clays, causing this deep red-orange color. There are up to and over 70 different shades in this area — white, created by silicon minerals, is very common, with yellows, pinks, purples, blues, and blacks also possible depending on the concentration of minerals in the sand. 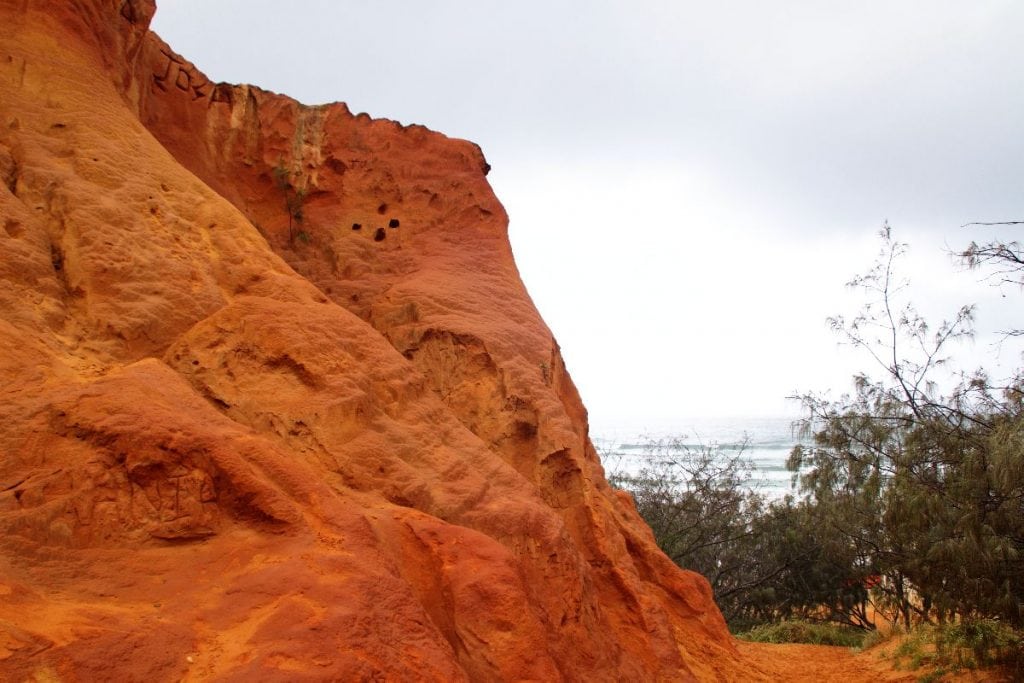 We made a brief pitstop for lunch in Rainbow Beach. This township has only about 900 people, and sits in a national park area. There is, however, an exclusion zone around the town itself because it was created prior to the land being a national park. It initially came about due to mining of the minerals in the sand, but today it thrives on tourism as it’s the closest access point to Fraser Island from Brisbane. A town with few shops, I highly recommend eating at Café Jilarty; they have something for everyone on their menu, great coffee, backpackers prices, and even offer free WiFi! There’s also a beautiful lookout from the walkway along Rainbow Beach.

The tour was timed perfectly so that when we arrived at Inskip Point to catch there ferry, it was there waiting for us. A brief 15 minutes later, and we drove off onto the second half of Great Sandy National Park, also known as Fraser Island! The aboriginal name for Fraser Island translates to “Paradise,” and we could instantly see why. 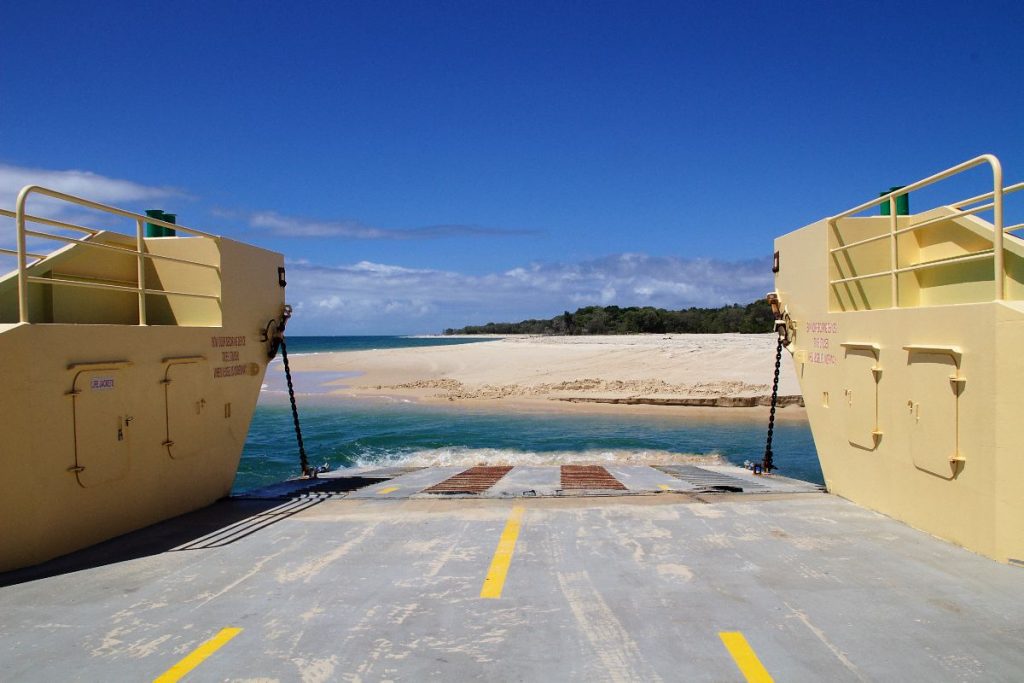 An island 128 km north to south, 24 km east to west, and standing 244 meters above sea level, Fraser Island is the world’s largest sand island. While it’s taken about 700,000 years to become what it is today, it’s continually growing and changing. The whole island has UNESCO World Heritage status, as it’s an example of a major or ongoing geological process, and it has examples of threatened or endangered flora and fauna. Because of the natural movement of the sand, and the fact that King Ferns are relatively rare in Australia, it has fulfilled UNESCO’s criteria. 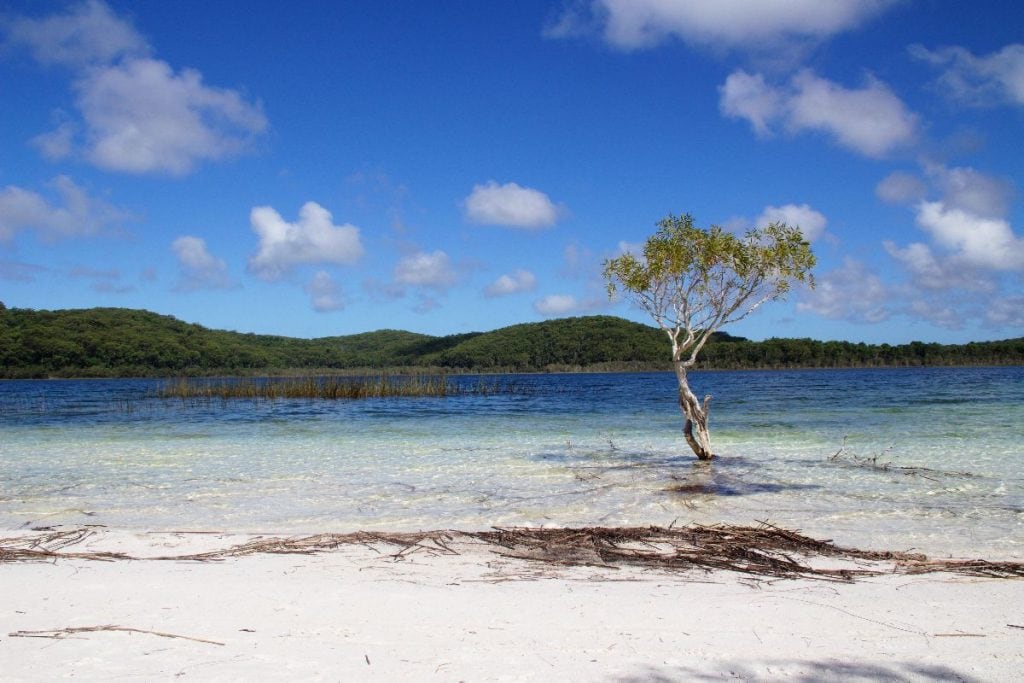 When we arrived on the island we went straight to Lake Birrabeen, an absolutely stunning perched lake. A perched lake is not fed by any rivers, nor does it flow into the ocean. It is filled by rainwater and rainwater only, disposed of only via evaporation. Fraser Island has the world’s largest and highest perched lakes. To keep the water as pristine as possible, it is recommended to wait a bit of time between applying sunscreen and hopping in the crystal clear water. 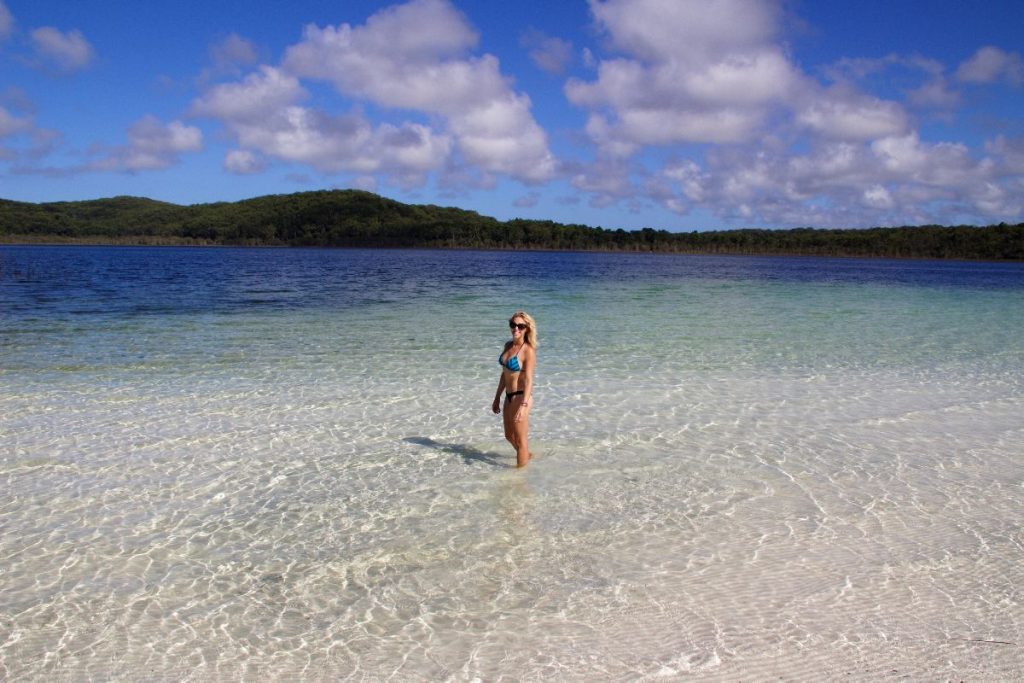 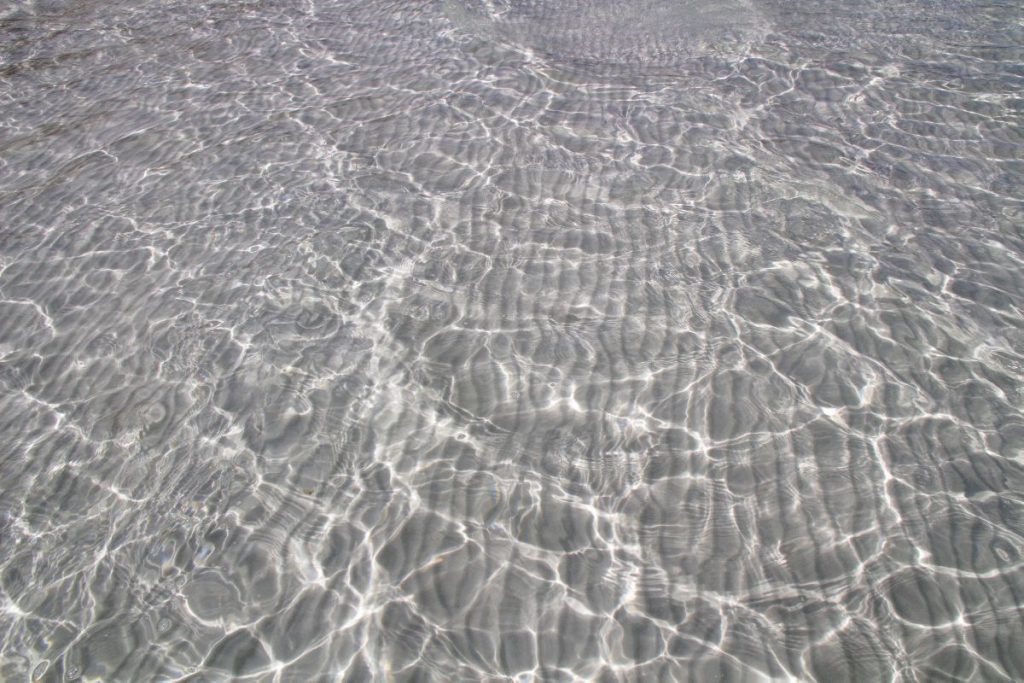 From the lake, we got slammed around a bit in the bus en route to Central Station. 5FT Tip: When in a 4WD vehicle on the island, a seatbelt will ensure that you don’t go flying to the front of the truck! Central station is located roughly in the center of the island when going east to west. During the logging days in the 1950s and 1960s, about 350 people lived here. Most buildings have since been demolished and more trees have been planted. Central Valley works as the entrance to Pile Valley, a rainforest of cultural significance. Aboriginal men are not allowed to enter this valley, as it’s a sacred birthing place for women. 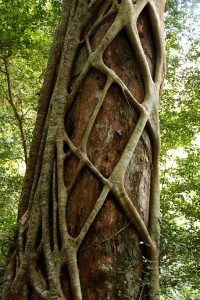 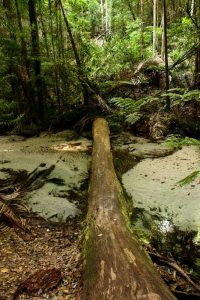 It is also environmentally significant, as King Ferns grow in this creek; they are the largest fern species in the world. Fossilized evidence has dated these ferns back 300 million years ago, before the dinosaurs roamed! 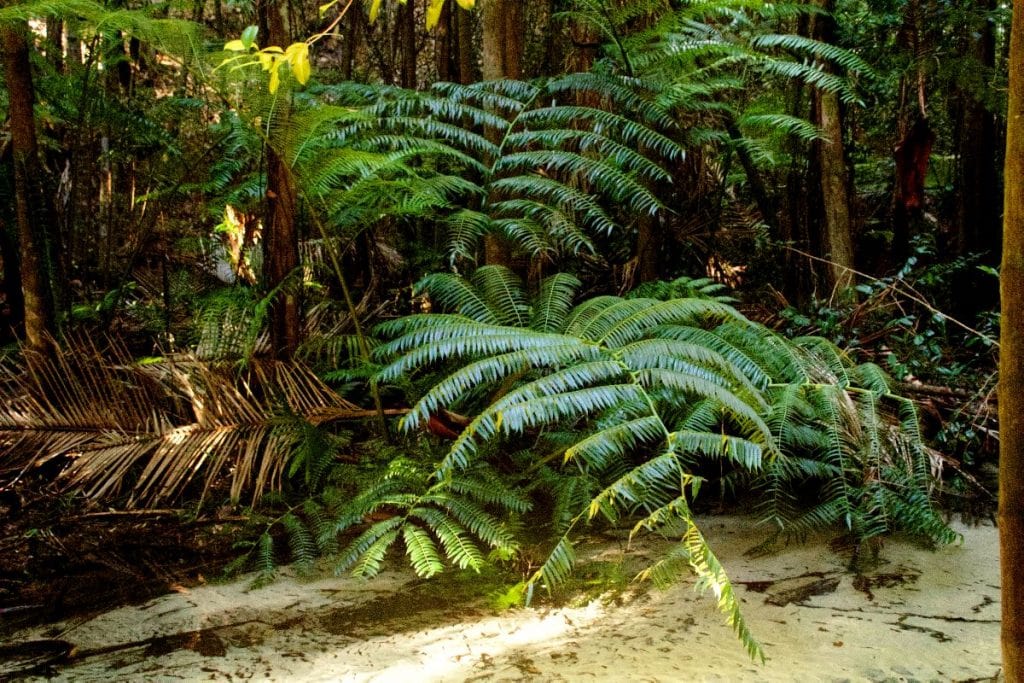 Exhausted from an early morning and a busy day of sightseeing, we headed back to the Eurong Beach Resort. The resort was lovely and spacious, with quite clean facilities. My four-person room with private bathroom and kitchenette proved more than comfortable. 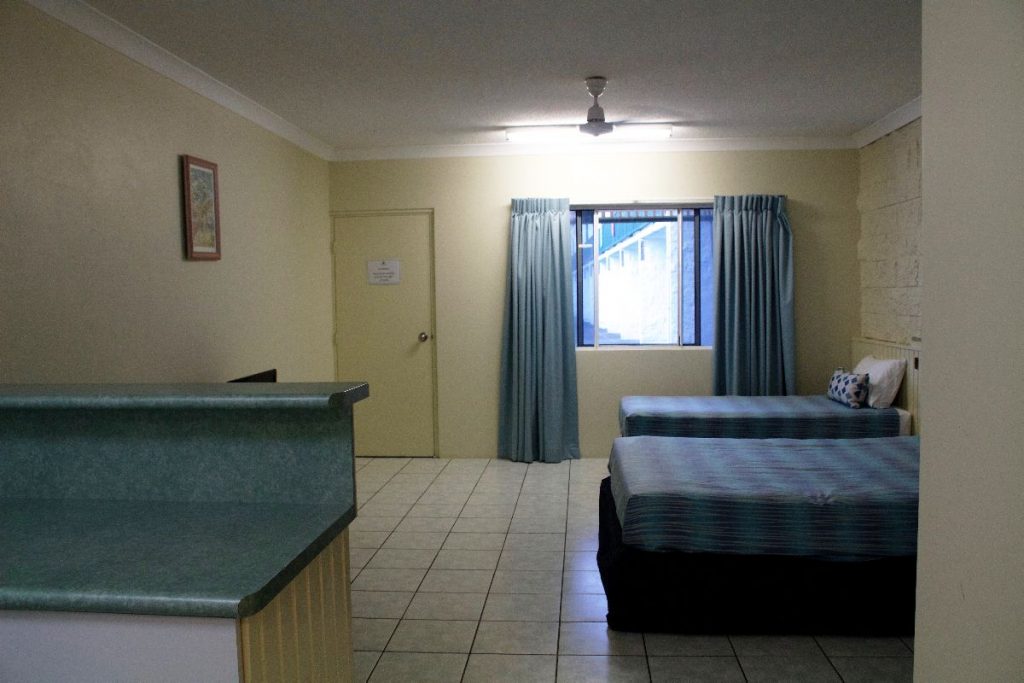 Breakfasts and dinners were buffet style, and absolutely scrumptious too. I really was impressed with the quality of food. If you feel like taking a swim, there is a pool in the complex; you could go lay on the beach, but remember not to take a dip in the ocean and to be on the lookout for dingos! At night, there’s a great little beach bar with more than reasonable prices and some pool tables too. Eurong Beach Resort made Fraser Island far more comfortable than I had presumed. 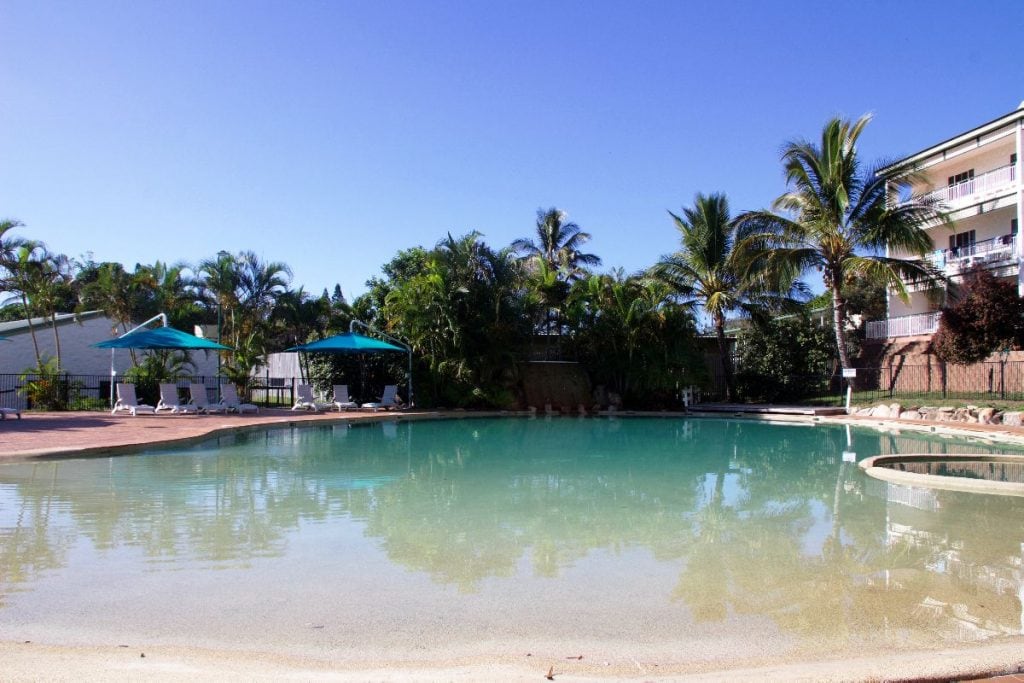 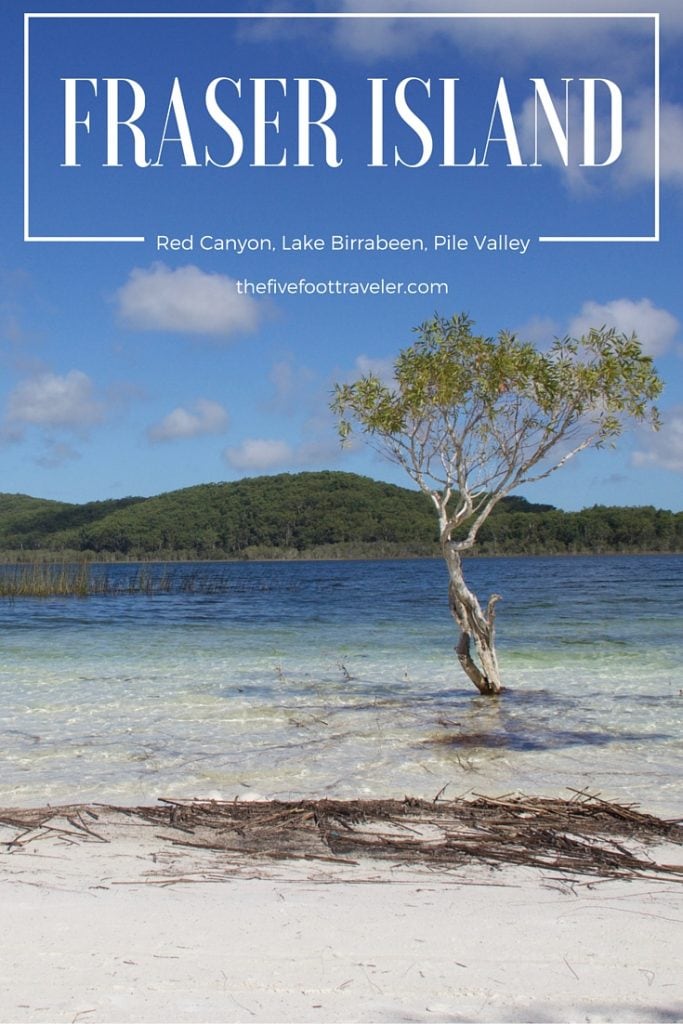