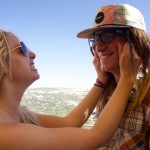 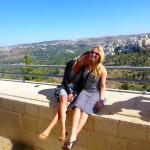 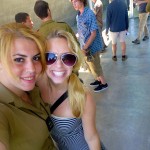 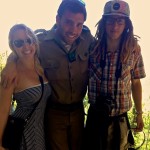 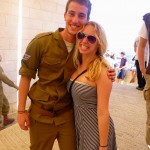 I had known from the moment I read our itinerary that Sunday was going to be a heavy day, as it was our visit to Yad Vashem – the Holocaust Memorial & Museum. While I’ve been fortunate enough to visit numerous historical Jewish sites in Berlin, Prague, and Budapest (amongst others), and have visited various Holocaust museums and memorials throughout Europe and the US, it was David’s first exposure to the horrendous persecution of the Jews.

From Yad Vashem we headed to Mount Herzl, Israel’s national cemetery for its leaders and fallen soldiers. The last few years I’ve been to several well-known cemeteries and I had assumed that Mt. Herzl would be a similar experience, just with less famous tombstones; I was mistaken. I will not be able to forget Mt. Herzl. While it is beautiful like many of the other cemeteries I’ve casually strolled through, this plot of land bore an inexplicable heaviness. After learning a bit about the life of Theodor Herzl, the founder of modern Zionism, we went to see his grave. 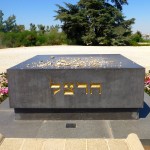 Herzl was initially interred in Vienna, however, his remains were moved to Israel after it had become a state; it was only right that he was re-interred in Jerusalem, as he was the strongest proponent for the creation of a Jewish state. As it is a Jewish custom to leave a stone on a grave (frequently in place of flowers), many of us picked up a stone and set it upon Herzl’s tomb. The origins of this tradition are unclear, however, the placing of a rock signifies that you were there, that you will not forget, and that that particular individual will continue to live within you. 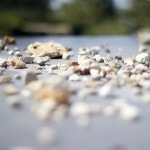 We walked through the cemetery and stopped at the Victims of Acts of Terror Memorial. This is where it became more personal; this was a cemetery in which our soldiers, the Israelis that accompanied us on our trip, shared how the violence has affected each of them personally. This cemetery had a story. Here, one of the soldiers in our group decided to speak up and share a story of his friend who was eating with his family in a restaurant that attracts Jews and Palestinians alike. He told us that halfway through dinner a lady walked in, sat in the most populated area of the restaurant, ordered a meal, and then subsequently blew up herself and many people around her. This attack killed his friend’s father, brother, and uncle, while leaving the friend blind. This was real. 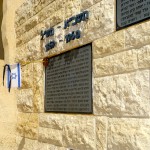 Next we wandered to the main Israel Defense Forces cemetery for those who have fallen in the line of duty. In this section, all soldiers, no matter what their rank, are buried side by side; none are more elaborately designed than the other, but all are plain and simple. This lack of burial ranking can be seen as Israel’s equal appreciation for each and every one of their soldiers. 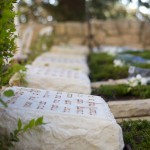 After a little bit, we came upon a plot that was far more colorful and decorative than the others. There was a stillness in our group, a change; it appeared that some people became far more contemplative. In the beginning I couldn’t place it, but I didn’t understand why it looked so different from the others either. It wasn’t long before we realized that this plot was set aside for our generation, for the young men and women who sacrificed their lives for the state of Israel. For me, it was unimaginable, especially considering the fact that we had seven active duty soldiers, our own age, standing by our sides. Eyes began to well with tears as we moved from one grave to the next. Many were personalized with objects, instruments, artwork, flags, letters, stones. Photographs. It was a strange juxtaposition – the bright, vibrant colors typically associated with uplifting thoughts set beside a photograph that reminds you just how young that individual was. It was a reality quite difficult to grasp and wandering through the plot I yearned for comprehension.

We sat on an empty plot of grass behind the gravestones and our soldiers, guides, and leaders began sharing the stories of those they once knew and continue to hold in their hearts. Although I’m generally not an emotional person, even I was crying hearing these stories of heartache and loss. To see people so open and so vulnerable break down in front of us was heartbreaking. Many of us sat with tears streaming down our faces, recognizing the reality that people our own age face. It hurt. It hurt seeing people we’d so quickly grown to care about hurt. After remembering and sharing the stories of those that have fallen, Itay, our guide, played us the song “Milion Kochavim,” Millions of Stars, sung by Amit Farkash. Even though we couldn’t understand the lyrics, we felt them. It was silent, minus the sniffles, as we let the solemn music touch our souls.

You wanted to fly

Wanted already to go on

With half a smile you climbed up

Just give (me) another second to tell you shalom

You wanted to fly

You went too far

In the madness there is no one to look after me

I wanted one second to tell you shalom

I wanted to sing, you picked up a guitar

I wanted to sing to you, to tell you shalom

I wanted one second to tell you shalom

Just give (me) one more second to tell you shalom

We eventually managed to compose ourselves, embraced one another, and departed for the Negev, as we were spending the night in the Urim Kibbutz. Luckily, we didn’t let our emotional morning carry over, and we made the most of our bus ride to the Kibbutz – it warmed my heart hearing so much laughter. By the time we arrived at the Kibbutz we only had a few minutes to drop off our things before having a delicious family-style dinner. A Kibbutz is a self-sustaining community, essentially you give what you can and you get what you need. After dinner, we met to discuss our experiences at both Yad Vashem and Mt. Herzl. Cue the waterworks once again. It was a time where we were able to express how truly touched we were by the service of our soldiers and how much we deeply respected them; they enter their mandatory military requirement with such pride for their country and such an admirable sense of unity and commitment. Little did I know at the time that two weeks later one of our soldiers would be sent to fight in Gaza. 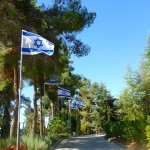