Woman Power: A day as a Nqileni Woman

A bit shaken from our difficult drive to Bulungula, we were thrilled to have arrived safely. From the parking area, we didn’t realize that we would have to walk half a mile in the dark with our heavy bags before actually reaching Bulungula. Note: there is no electricity in the village, so I’m not exaggerating when I say that we couldn’t see a thing; please walk carefully. I actually ended up coming face to face with a horse in the darkness!

At last, we made it to Bulungula Lodge. After chowing down on some much needed dinner (delicious, traditional African fare), we were given a thatch-roofed hut that was to be our home for the following three nights. 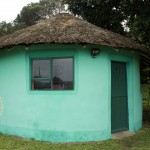 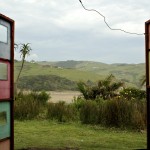 When we awoke the next morning, we were surprised to find that Bulungula was located beside a beautiful, secluded beach. I jumped right into the many activities offered at Bulungula and decided to tap into my “woman power.” I was met by a 23 year old local from the village, Philiswa, who led us through the village to her home which, like every other home, was a one-roomed hut with no beds, nor materialistic goods. There were some pots, some bins, and some mats spread across the floor. That’s it. When we asked where she slept, she said that they rolled out the mats. Three people slept in that one home – Philiswa, her daughter, and her mother (the rest of her five siblings were at school in Mthatha).

Philiswa then started grinding a wet rock over a larger rock to make white face paint – they use the face paint as a means of sun protection. 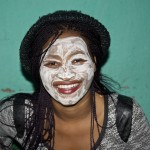 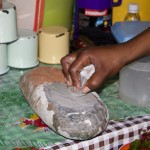 She then tied a head wrap around our heads and we went to fetch water. One of the other guests, Patricia, and I filled up a small container of water and Philiswa told us that we were to carry it back to her home, naturally while balancing it on our heads. At first I thought that it’d be really difficult, but it wasn’t as hard as I thought and quickly got the hang of it. Granted, it was only a quart of water… I guess I still have some practicing to do. 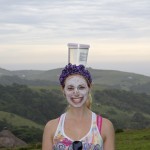 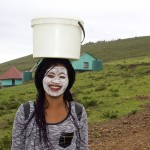 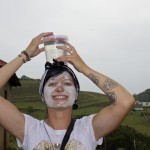 It was then time to go to the forest and collect sticks for fire. We were told to grab any stick we could that didn’t have leaves and to stack them up. Once gathered, Philiswa tied them up for us with tree bark, showed us how to wrap a towel to fit atop our heads, and then put the bundle of branches on our heads to balance and carry up the hill to her home. Not half as hard as it looked! It’s funny, you don’t actually realize how heavy they are until you take them off your head – it felt like a weight had been lifted. 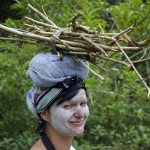 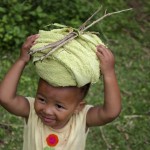 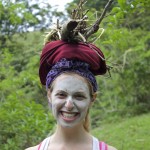 With the branches, we made a fire from scratch (and it kept, despite the rain). Once the fire was going, we boiled water, poured in some maize, and made “pap.” Philiswa’s mother was out in the garden picking spinach and onions and we sat on the ground finely chopping them up. In the end, our meal of spinach and pap was delicious. After lunch, we walked back to Bulungula in the rain while slipping and sliding down the muddy paths. 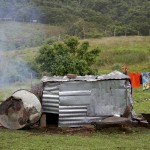 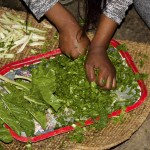 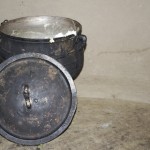 Spending the afternoon as a Nqileni woman is an exceptional cultural immersion. I can’t stress enough how much you’ll get out of spending the day with Philiswa 🙂 A truly eye-opening experience.