White Water Rafting down the Zambezi with Wild Horizons!

We only had a day and a half in Victoria Falls, and I knew that I wanted to make the most of it. Prior to arriving, I arranged with Wild Horizons a private white-water rafting tour, as 11 people in our group wanted to participate. As soon as we arrived in Vic Falls, we went straight to the office; Eddie enthusiastically explained all of the activities they offer, which made me ten times more excited for the day. He told us that, since we arrived early enough, we were able to complete a full day of white water rafting by doing Rapids 1-19 down the Zambezi River.

After a short safety chat (which totally scares you), we were suited up, and drove to our starting point. We were given the option of going on an oar boat (the “Wussy Boat”) where the guide, Blessed, does the steering for the whole boat, or on the paddling boat (the “Adventurous Boat”) where we were given our own oars and steered ourselves down the Rapids. As much as I wanted to treat my shoulder injuries with care and go on the oar boat, I just couldn’t do it, so onto the paddling boat I went…Apologies to my shoulders and my orthopedist, Dr. Diaz!

To get to the Rapids you have to climb down into the gorge, which is most definitely not for anyone who has a fear of heights! The ladders leading down are practically vertical and, while the path is well-marked, the guides weren’t joking when they said it was steep. Please don’t underestimate your physical ability to climb up and down the gorge just because you want to white water raft… 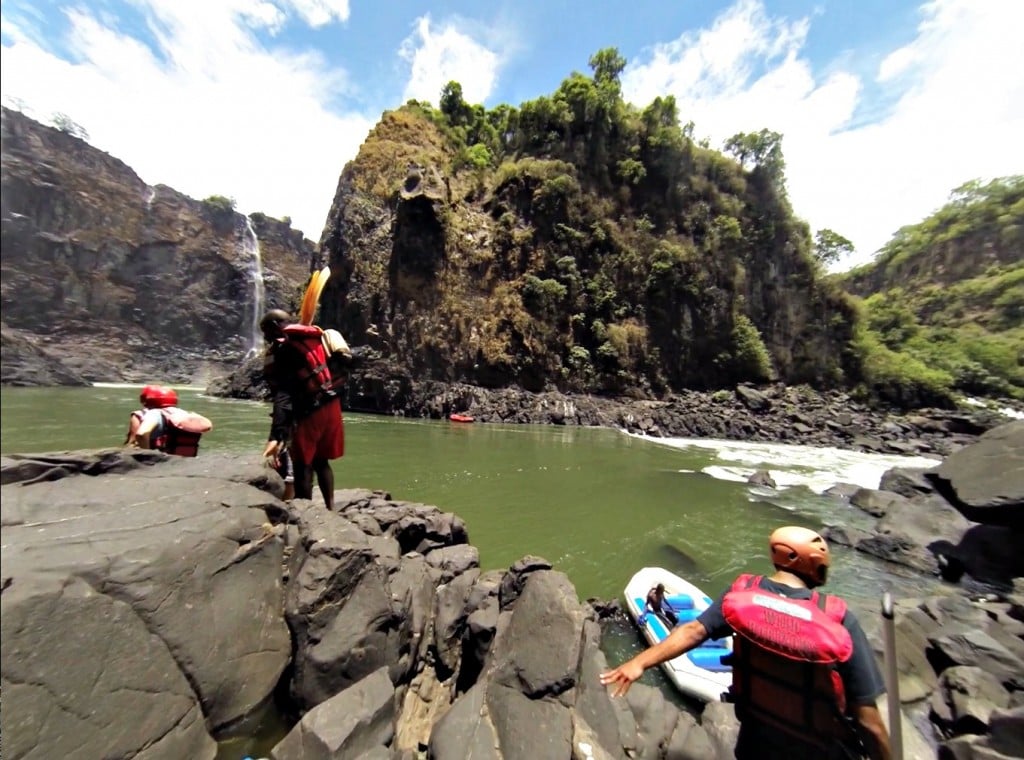 Once finally at the Zambezi (after having used my oar as a trekking pole), we were dripping in sweat and took a nice dunk into the croc-infested waters. Note: there have been no crocodile attacks to white-water rafters in the Zambezi, but it is their territory. Our guide Eliam, then tightened all of our life jackets and told us exactly where he wanted us to sit in the raft and we did as told. We practiced steering and some of the commands – “Hold on!” “Get down!” “Right back,” “Paddle forwards,” “Paddle backwards,” “All back,” etc. When we were comfortable enough, we were thrown right into Class 3 rapids…and my anxiety I might have had completely dissipated as I realized that it was friggin’ awesome!

I figured that I was going to be the first person to fly out of the raft because I’m pretty light, and boy did I. Halfway through, on an “Extreme Class 5,” my feet went up over my head (in what felt like slow motion) as I backflipped off the raft into the rough, churning waters. Even though I hadn’t wanted to flip off, it was totally fantastic. Michelle was speedy as ever, grabbed me, and threw me back into the raft. Not knowing how light I was, she pulled with a lot of force and I went flying into her in a fit of giggles. It’s just ridiculous how beautiful it was rafting down the Zambezi; the gorge is a massive, remarkable sight. A few minutes later, it began to look like a scene out of Jurassic Park as it began to drizzle. And the drizzle turned to rain. And rain turned to “pissing down,” as Chris would say. It began raining so hard that the beads of rain physically hurt our skin and it was virtually impossible to see. It really was the “Land of Smoke and Thunder,” and I was quite impressed that Eliam was still able to take control of our raft and give us our commands despite not being able to see. As time went on, we were bouncing around and we thought that the boat was going to capsize more than a few times. Layz almost got thrown out twice, and I looked over to find Jay holding Layz in the boat by his legs – quite a hilarious site indeed. 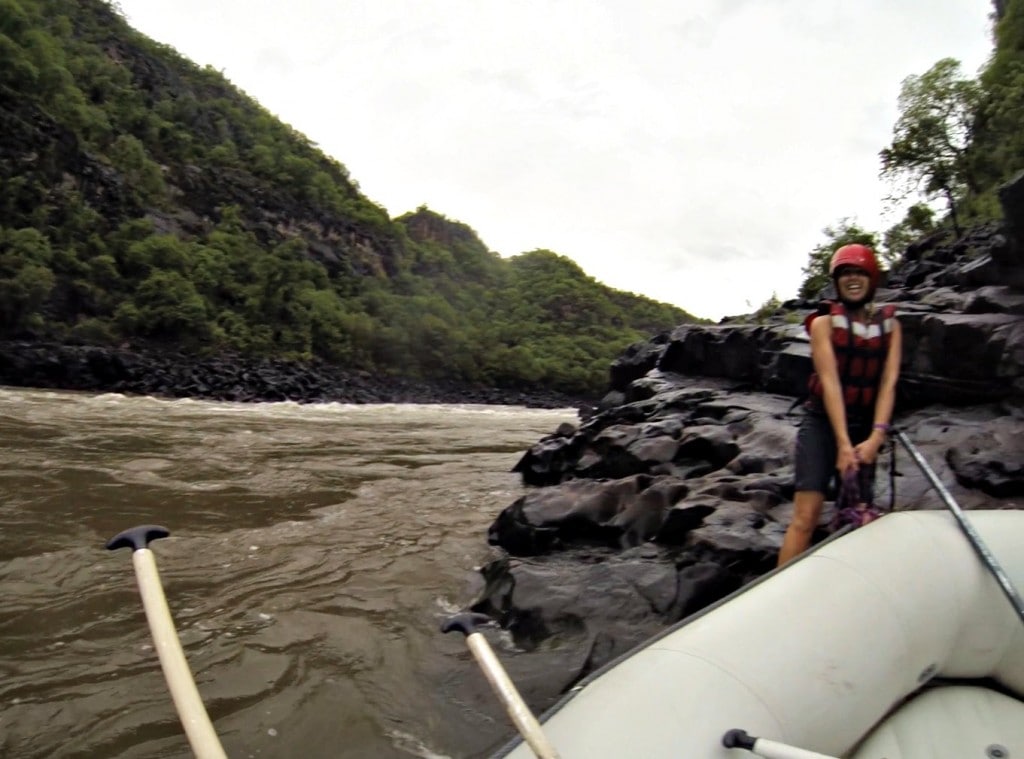 Before the “Washing Machine” rapid, we were given a pep-talk that ended in Eliam saying that we will most definitely capsize if we don’t paddle hard enough and enter the notorious Washing Machine. Jokingly, we said that we hoped our friends in the oar boat ended up in the Washing Machine solely because they didn’t want to come in our adventure boat. Within seconds of saying that, we heard Eliam go, “Oh shit! They’re in the Washing Machine! They’re going down.” And they capsized. From a distance, it was hilarious. We then tackled the Washing Machine, paddling really hard to bear right and avoid the tumble. Remarkably, we avoided the capsize and paddled as hard as we could to rescue our friends. Then, we realized that the whole ordeal wasn’t funny, as they had looks of sheer terror on their faces. Collecting everyone and pulling everyone into our raft was challenging, and quick, because next thing we knew Eliam was yelling, “My group! Positions now!” as we hit another set of rapids and were responsible for getting everyone through them. We managed. 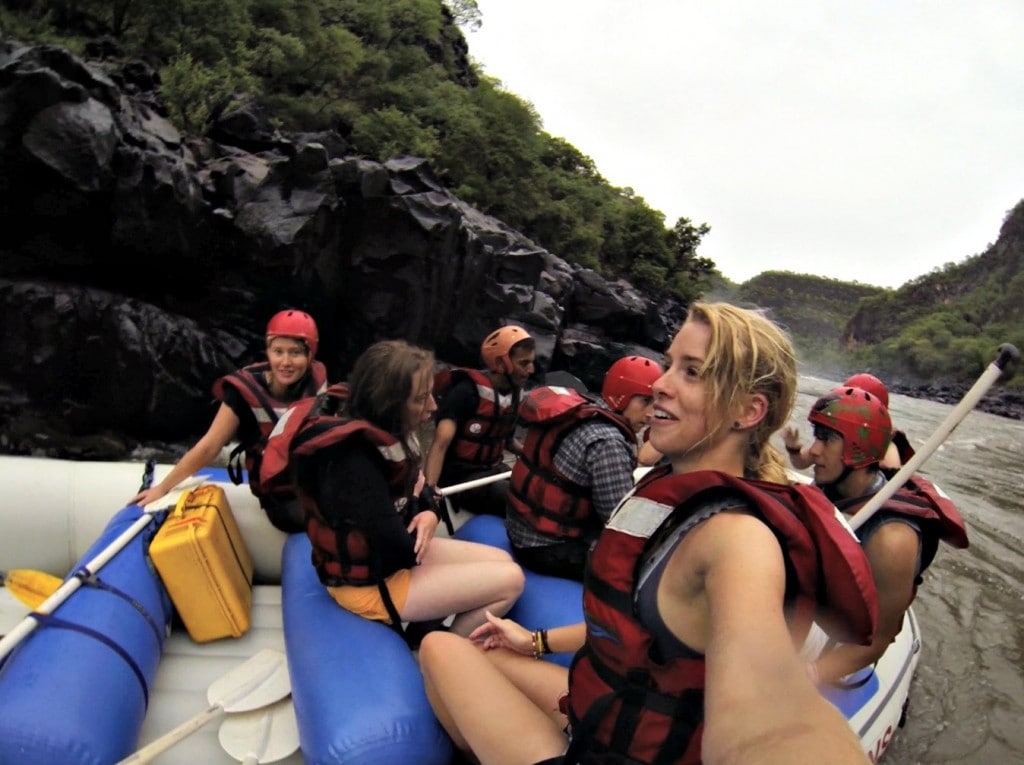 A bit of time later, Eliam told us that we could hop out of the raft and float down some lighter rapids. We all decided to jump in, and got thrown down the Zambezi with mouthfuls of water.

Ultimately, we completed Rapid 19 and it was time to hike back up the gorge. I took my time going back up – a combination of exhaustion, dehydration, and slippery sneakers most definitely didn’t help – and, while trying not to trip in the mud, took a wrong turn and lost the whole group. Needless to say, I ended up climbing the gorge with a bunch of local guys offering to hold my hand and asking for my shoes to give their sisters for Christmas. I thanked them and dismissed their help, saying that I was determined to make it on my own. Travelers Tip: It was a challenging hike up, particularly due to the torrential rains, and not recommended for anyone with shortness of breath, asthma (or any other breathing condition), or hip/knee/ankle issues.

At the top of the gorge, Wild Horizons provided us with a hot meal, water, soft drinks, and beer. I hadn’t eaten in about 10 hours, so I was super hungry and dehydrated; it hit the spot. 45 minutes later, we were back at camp and changing into warm, dry clothes.

Wild Horizons did an exceptional job with their white water rafting excursion. Their guides are so knowledgeable and make you feel safe at all times; they were both skilled and polite. It cracked us up that Eliam always said please after shouting a command. The fact that Wild Horizons was willing to accommodate our group, at a time convenient to us, was really so appreciated.