We had planned on spending the day at the Shongweni Game Reserve on our way to the Drakensberg Mountains, but after driving in circles, we couldn’t find it and settled for admiring the beautiful rolling hills that make up the Valley of 1000 Hills (hmm I wonder how it got that name?!). We then made another pit-stop at Howick Falls, located directly in the center of town. While it’s definitely a touristy area, it’s worth hitting as the waterfall was beautiful. We perused the markets surrounding the falls, ate some Indian food, and took off (with a Milo milkshake in hand, of course). 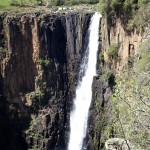 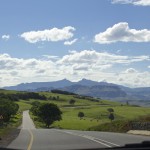 We knew that the Nelson Mandela Capture Site was nearby, but weren’t exactly sure where. We asked people in town where it was, they pointed us to the right, and said that we couldn’t miss it. Well, we missed it. The drive was stunning, but after about forty minutes of driving we realized that we most likely passed the site. I hopped out of the car, walked into the nearest restaurant, and asked where we could find the capture site. He gave me directions, pointed in the way from which we came, and said we couldn’t miss it. Naturally, we missed it…again. After seemingly driving past the capture site three times, we found it – fourth time’s a charm?

Travelers Tip: When coming from Howick, if you’ve passed the “Piggly Wiggly” you’ve gone too far. 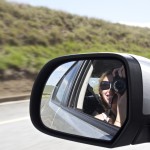 We walked through the museum about Mandela’s life, but it was very poorly laid out and difficult to follow. For what it’s worth, it seems as if a new museum was in the making.

Just outside of the museum there is a freedom path which leads to the landmarked site. From up the slope, and down the street, the memorial just looks like a bunch of iron bars. As you approach, the bars begin to form Mandela’s face set against a beautiful countryside backdrop. It was a very unique sculpture and definitely worth the 30 minute pit-stop. 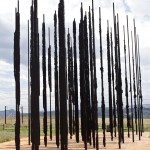 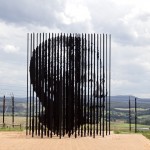