Walks of Turkey: Istanbul in a Day

Before heading to Istanbul, we had heard that it was a big, chaotic city. We didn’t have the time to devote a week in Istanbul, so we decided to go on Walks of Turkey’s Istanbul in a Day Tour. The meeting location was next to the entrance of the Blue Mosque (looking directly at the Blue Mosque, from what seems like the front, it is on the right hand side around the wall next to the Obelisks). Kamil was our tour leader and what a tour leader he was! Always attentive to everyone in the group, Kamil provided relevant and interesting information on everything of importance and could answer virtually any question asked. He held a PhD in related historical studies, which accounted for his excellence on our Istanbul in a Day Tour. Kamil was very welcoming, friendly, caring and showed concern and respect for everyone in the group; he is probably the best tour guide we have encountered during our travels thus far. 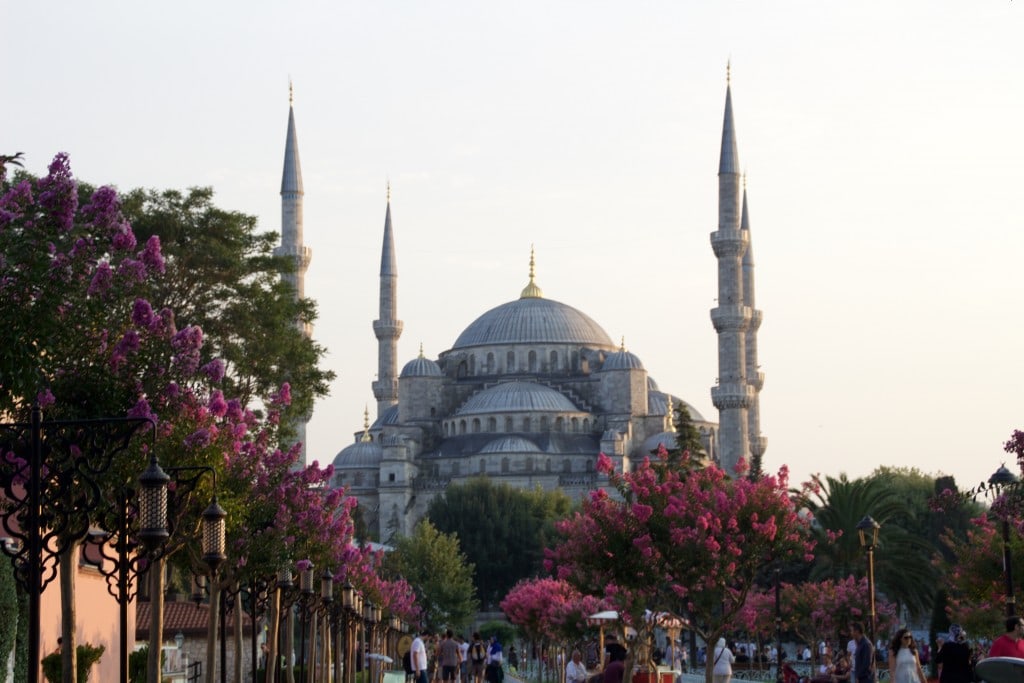 The tour itself started off at the Blue Mosque and ended by the Galata Tower. The Blue Mosque is impressive, to say the least. Offered to you at the entrance are articles of clothing to cover up should your attire not be appropriate. It was built in 1609 and, originally, the floor used to have entirely blue carpets, giving the Blue Mosque its name. Today, the inside walls are made of blue tile, one of the most valuable artifacts. Before entering the Mosque, men wash their hands, mouth, face, and feet so that they can then go into the Mosque to clean their spirit. Inside the Mosque we learned about Muslim prayer, as part of the 5 Pillars includes praying five times daily; if you are working and can’t pray at each designated time, you can pray for one hour at night to make up for it. Prayer in groups is typically lead by the Imam, but if you pray on your own, you need to memorize certain Arabic phrases for the prayer. I found it fascinating that the Turkish pray in Arabic, but don’t actually speak Arabic themselves. While 99% of Turkey is Muslim, only about 50% are practicing.

After the Blue Mosque we were given the history of the Hippodrome that once existed outside the Blue Mosque; it’s where chariot races were once conducted. While the actual Hippodrome was destroyed, the area was turned into a public garden with a road running around it: the identical course of the chariot race track. From there, you can see three obelisks dating back to as early as 1500 BC: the Egyptian Obelisk, the Serpentine Column, and the Column of Constantine Porphyrogenitus.

After the Hippodrome, we made our way to the Hagia Sofia. It was built in 537 and took six years to build. Originally a church, it was converted to a Mosque in 1453 after the Ottomans conquered the region. Because of this importance for both religions, in 1934 it was converted to a museum to honor both religious purposes. 5FT Fun Fact: The altar is set East, as it was a Church first, so when it was converted into a Mosque, Muslims shifted South East to face Mecca. It was an interesting juxtaposition between the images of Jesus, the Virgin Mary, and the Archangel Gabriel, and the big Arabic medallions in every corner. Today, it is a symbol of peace and harmony between religions and stands out as a symbol of religious tolerance. 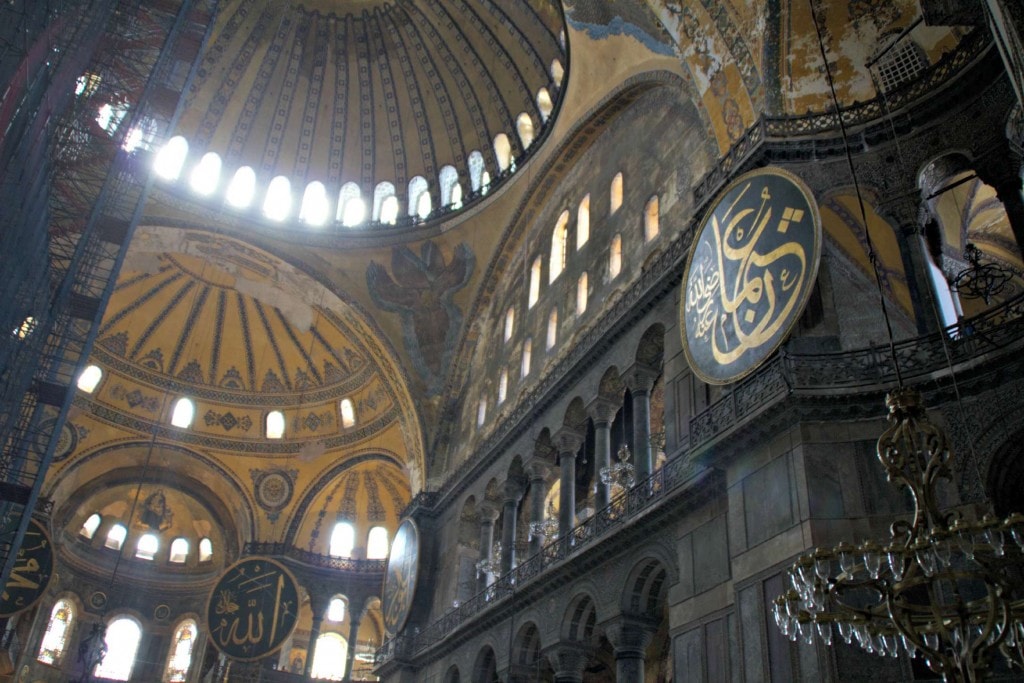 Once finished at the Hagia Sofia we made our way to the Basilica Cistern, built in 532 AD, and made of 336 columns. It was beautiful, well-lit, and great for photos, but if you’re touring Istanbul on your own, and tight on time, this can be skipped. 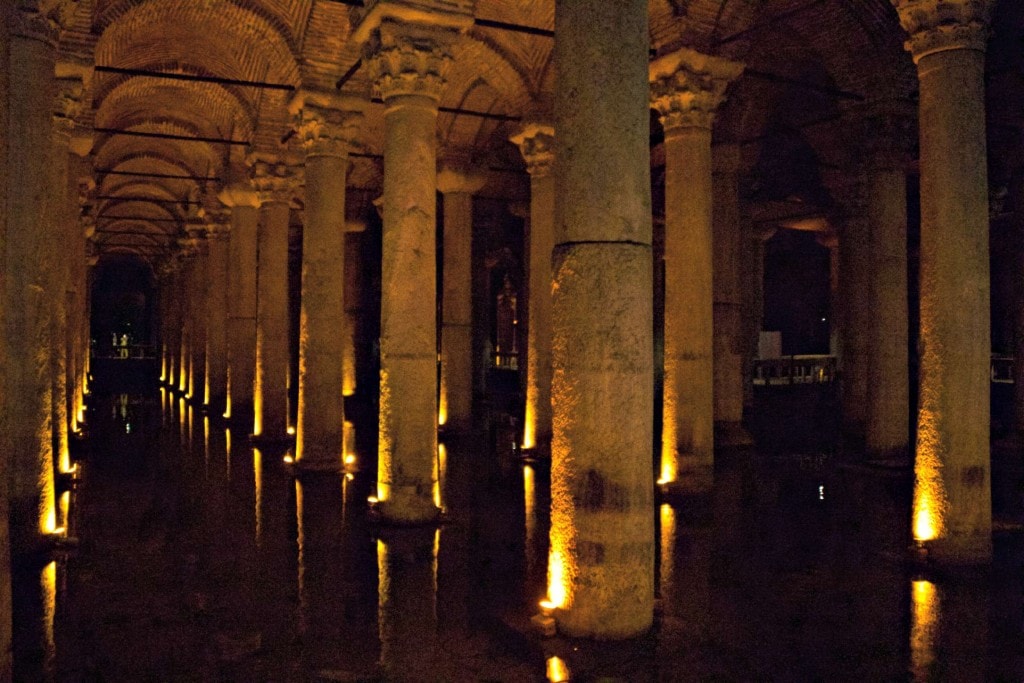 One of the highlights on our Istanbul in a Day Tour was the lunch we were provided and the various traditional foods to which we were exposed. The meal was absolutely amazing and consisted of several appetizers with bread, drinks (non-alcoholic, try the mint lemonade!), a main dish of kebab, traditional meatballs, beef, chicken, thin tortilla bread, and vegetables. All dips and dishes were explained in full and why they were traditional so that they could be appreciated.

Lunch at Fuego Cafe and Restaurant consisted of: 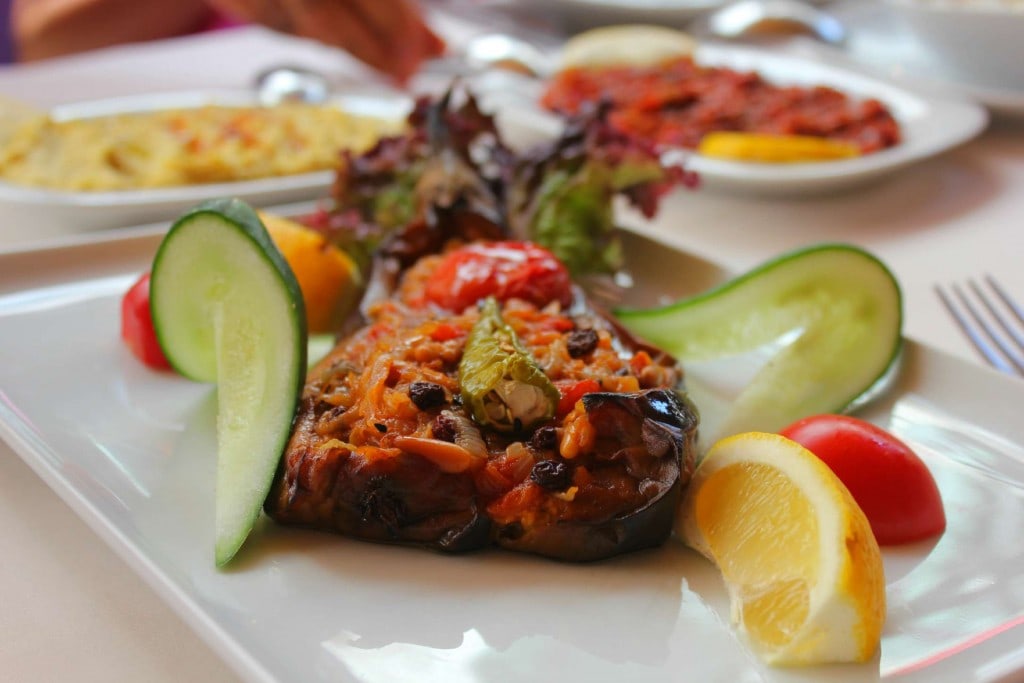 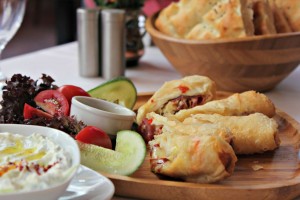 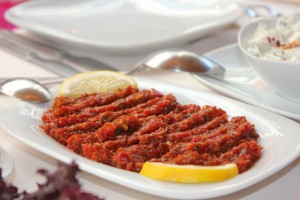 5 FT Fun Fact: “Kebap” is the same as “Kebab.” While “Kebap” is the proper spelling, since the “p” is pronounced similarly to a “b,” people started spelling it with a “b.” “Kebap,” means meat. Any kind of meat – grilled, boiled, or fried beef and lamb (no pork).

Lunch concluded and we made our way to the Grand Bazaar. I did not expect such posh stores inside the Grand Bazaar. This area is not so much for haggling but for serious shopping. There are about 4,000 shops, 21 gates, and it’s entirely pedestrian. Beware of people shoving you a bit if you’re not moving quick enough.

Kamil then brought us to a rooftop lookout point, accessible only by knowing someone that has a key to the roof. This view offered a different look at the city and was definitely a cool, unique addition to our Istanbul in a Day Tour. 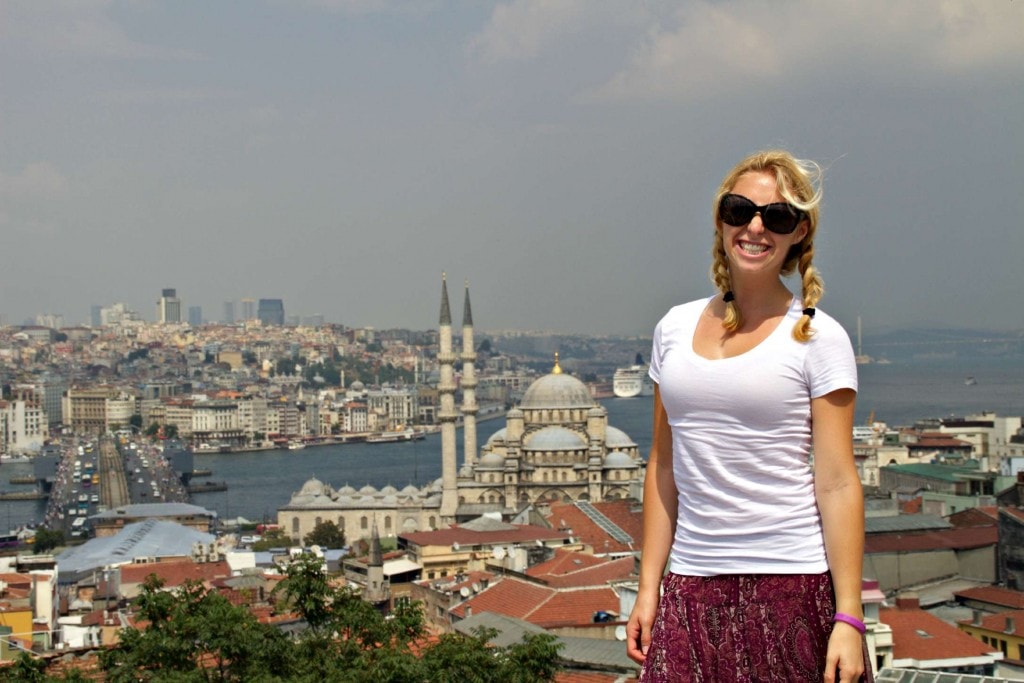 Next, we found ourselves at the Spice Bazaar. This was as spectacular as I thought it would be. Any and every spice you could ever imagine, want or need for cooking could be found there. Additionally, a slew of shops that had the most delicious looking pastries were both abundant and endless. We had the opportunity to taste test several teas, fistikli lokum (Turkish delights with pistachio), and covered nuts (such as sesame seed coated peanuts). 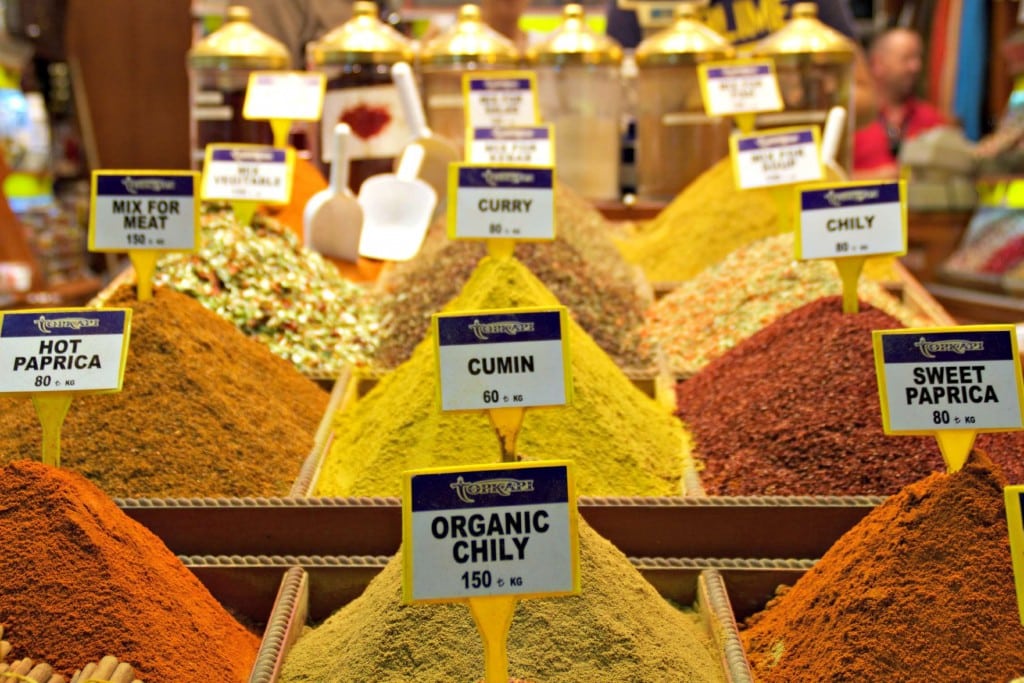 After begrudgingly leaving the Spice Market, we were given a virtually private boat tour of the Golden Horn, the point where the Bosphorus Strait and Sea of Marmara meet; the Golden Horn geographically separates “Old Istanbul” from the rest of the city. The boat could hold 130+ people, and yet our group was a total of five including Kamil. The boat tour lasted for an enjoyable 60 minutes, with Kamil still firing away information as we cruised. From the boat we were able to see everything: both Europe and Asia, all of the most famous mosques, the Dolmabahçe Palace, etc. Some facts that we learned while cruising: 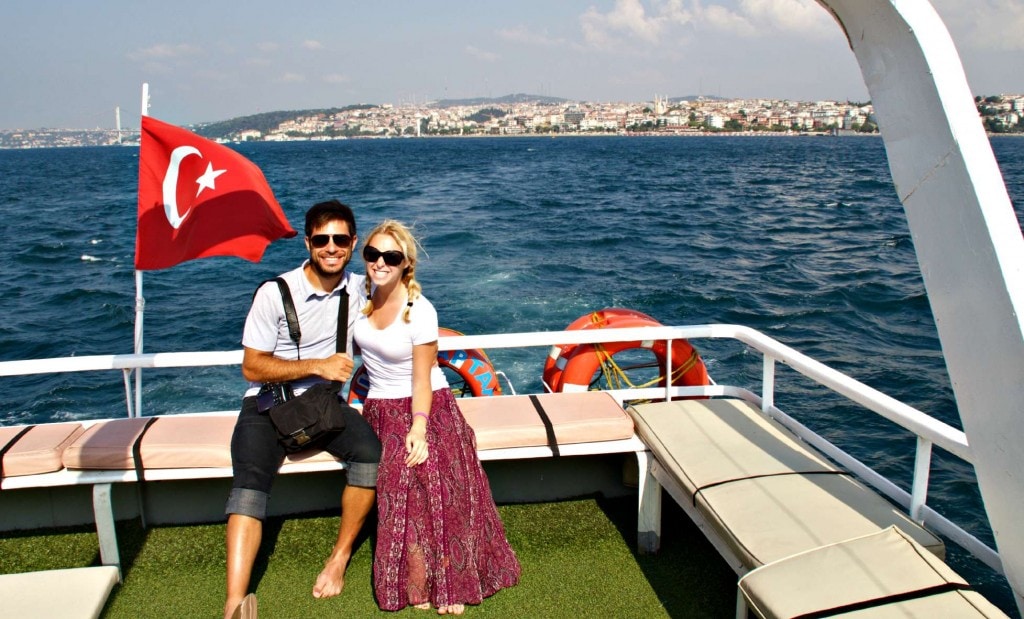 The boat tour ended near the Galata Tower, constructed in the 14th Century as a defense tower. We finished up the Istanbul in a Day Tour at a rooftop restaurant/bar that offered the same view you could get from the top of the Galata Tower without an entrance fee; it was stunning. Here we sat and enjoyed food and drink together with the other members in the tour group. Kamil instructed us how to get back to our hostel across the city and so we set off to catch the bus to Cappadocia.

While walking back to the hotel, we could not help but admire the entire tour we had just been given. Our impression of Istanbul the day before the tour, attempting to view sections of the city on our own, was not great. We thought the city of Istanbul too busy, crowded, noisy, and just unappealing. The Istanbul in a Day Tour, on the other hand, showed us everything important to see and do in Istanbul, and changed our impression of the city completely. What we thought was too busy became manageable. The crowds seemed to disappear when Kamil spoke and we were able to focus our attention on the beauty of the city: mosques that fill the skyline, a beautiful blue river that divides the city in two, and pastry shops selling things you might have thought were only seen in dreams. The city is uniquely beautiful. Be prepared, because its size may deter you from what is amazing about Istanbul. The Istanbul in a Day Tour was worth every cent and they come with our utmost recommendations.

As a westerner, more specifically an American, I think it is sad that radicalism and terrorism have tainted the Muslim culture; the Muslim man is respectful, strong in prayer, and provides for his family. Fighting isn’t in religion. The media and other outlets, however, impose an impression of Muslim countries in our minds. People told me not to go to Turkey because it was unsafe. While there may be areas I would not want to explore on my own, I also recognize there are many places in my own home country I would not want to wander into either. Overall, I found the Turkish to be like anyone else: willing to help, kind, and respectful.

**Special thanks to Walks of Turkey for kindly offering me a complimentary tour. As always, all opinions are my own.