Egypt Pyramids Tour: Everything You Need To Know About Visiting The Pyramids

Like many other travelers, what drew me to Egypt was the strength and mystery of the Great Pyramids. Why are they there? Who exactly built them? In the minds of many, Egypt is a historical mecca, and a trip to Egypt certainly wouldn’t be complete without a visit to such a remarkable site. I’ve dreamed of going on an Egypt pyramids tour and visiting the Pyramids since I was a little girl. Never did I expect to visit them after having been invited to be a keynote speaker at a large, international conference, and never did I think that I’d have my brother by my side to experience it with me! Like many other cities in the Middle East and Northern Africa, Cairo is a chaotic and bustling metropolis with its own unique charm. And, because of that, it is especially nice to escape the city and immerse yourself in the outdoors… especially when that plan includes visiting the Pyramids! 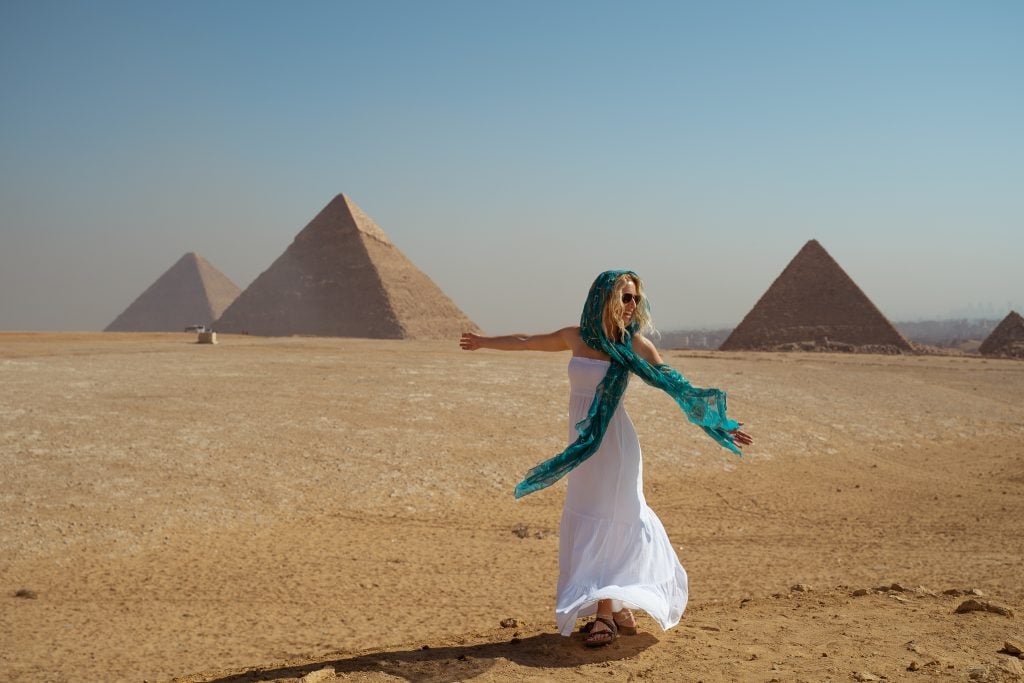 Having a blast visiting the Pyramids

So, since we only had a short time in Cairo, we embarked on our Egypt Pyramids Tour bright and early to soak in thousands of years of history, dating back to 2589 BC.

** All photos in this article taken by my incredible brother, David Gallo. You can check out his portfolio here.**

Flights To Egypt: Your First Step To Visiting The Pyramids!

Cairo is most easily accessible via plane. Bordering Sudan, Libya, Israel, and Jordan, looking at flights to Cairo is certainly your best option, as traveling to Cairo overland isn’t particularly recommended for your trip to Egypt. Cairo International Airport will be your main hub both for international flights arriving/departing Egypt, and for domestic flights (like to Aswan or Luxor). You can get the best prices for your flights to Cairo here. Do note that it takes about an hour to get from the airport to Giza, where the Pyramids are located.

Hotels in Giza – Where to Sleep

I wanted to stay as close to the Pyramids as possible. I initially looked at the Marriott Mena House (since we all know that I love my luxury travel), but I opted to switch it up this time around so that I could have the pyramids in my “backyard” and stayed at the Pyramids Overlook Inn. Honestly, it far exceeded my expectations in every way possible! It is affordable to every type of traveler, and offers unrivaled views of the Pyramid and Great Sphinx during your trip to Egypt. From the hospitality to the epic views, you surely won’t be disappointed. As I’m sure you know by now, I’ve stayed in some pretty remarkable places…but never in my life was I able to sit on a terrace and look out onto the only remaining Ancient World Wonder. To say I was overwhelmed by the view at Pyramids Overlook Inn would be an understatement. Book your stay here — you won’t regret it! 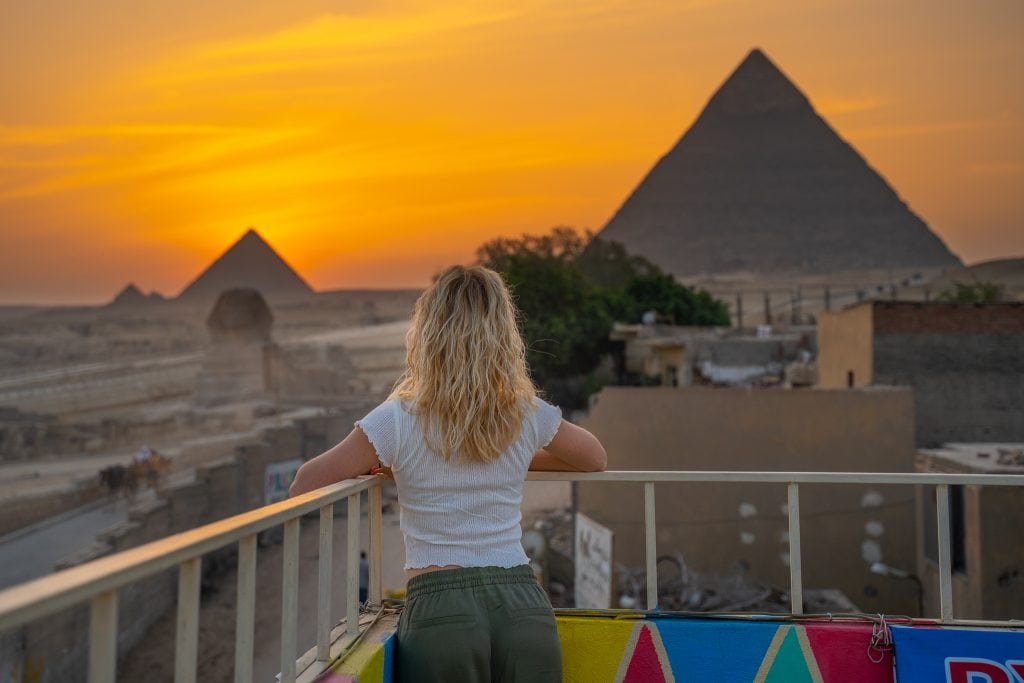 Thinking about visiting the Pyramids? Start by booking a hotel nearby!

While Cairo does have a public transportation system, the easiest way to get around would be to join an Egypt Pyramids Tour. Since I had many specific places that I wanted to visit, and a relatively complicated schedule (as I planned my trip to Egypt around speaking at the Narrative PR Summit), we hired a private tour guide and driver to aid us in visiting the Pyramids.

Taha Marie came highly recommended to us by a friend, and we were thrilled with his service. As our time in Cairo was a bit hectic due to the conference, we hired Taha to take us on a full day “Egypt Pyramids Tour,” which is when we realized that there are so many more pyramids in Egypt than just the Great Pyramid of Giza! In fact, we visited the Giza Pyramids, Saqqara, and Memphis on our Egypt Pyramids Tour, and we are thrilled that we did!

He is a wealth of knowledge and I highly recommend his services. Should you want to contact Taha about your upcoming trip to Egypt or about visiting the Pyramids, you can connect with him on Facebook here. 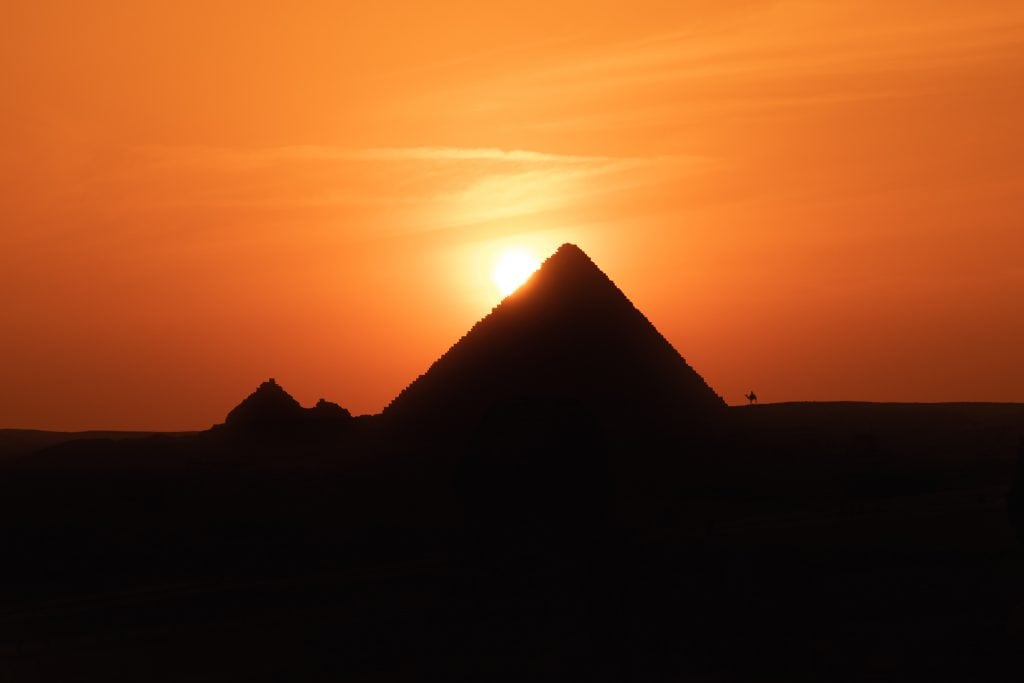 Entrance Fees for Visiting the Pyramids

You will find all prices listed in Egyptian Pounds. At the time of writing, 1 USD is about 16 EGP. Please see the following entrance fees:

I highly highly highly recommend visiting the Pyramids first thing in the morning. They open at 7am, and I suggest being there when they open because…

Of course, the most iconic of all pyramids is the Great Pyramid. Upon successfully entering the Giza Pyramid Complex, the Great Pyramid is the first pyramid that you will see… and it is truly great. As I’m sure you can imagine, most people and tour groups walk through the entrance and right up to the Great Pyramid. I recommend walking clockwise around the Pyramid as the lighting will be better, and there will be far less tour groups. 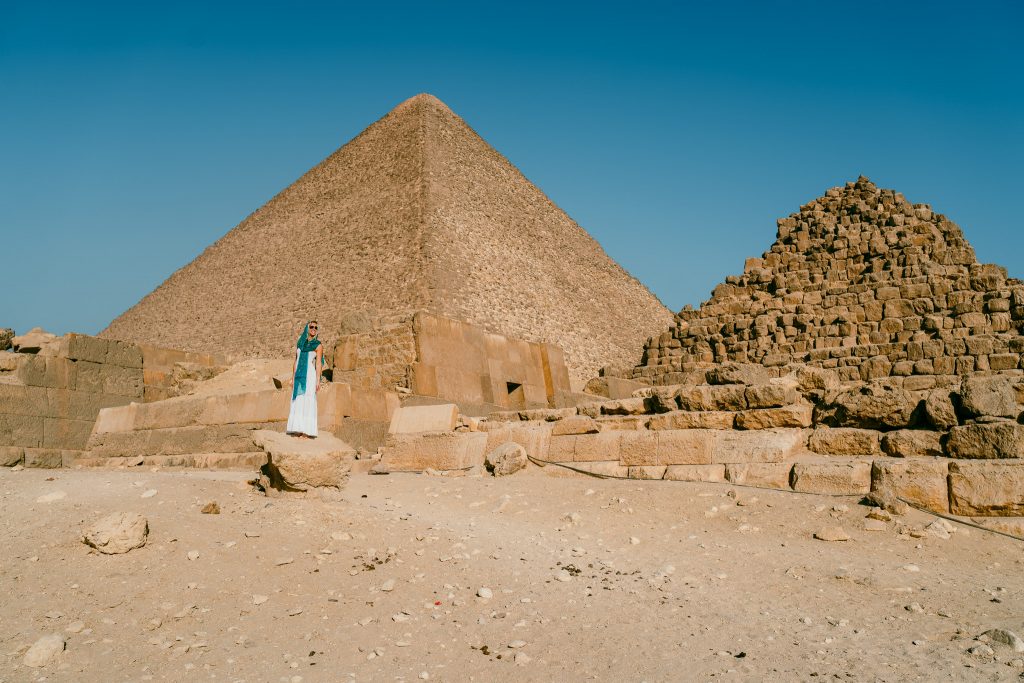 A tourist-free view of the Great Pyramid of Giza

To think that the Pyramids were built without modern technology, and in such symmetry, is remarkable. Unlike how many of us picture the Pyramids, they are not, in fact, smooth on the outside… anymore. By now, the smooth limestone exterior that had once lined the Pyramids has eroded away, revealing a jagged step-like pyramid. You can enter the Great Pyramid and look up from the bottom to the top, however, there is absolutely nothing inside. You will be able to see the perfectly smooth rocks and the perfect pyramid shape, but the Pyramid itself is entirely empty and there are no hieroglyphs on the walls. Personally, we skipped going inside, as we chose to enter a pyramid that still had hieroglyphs (more on that later). 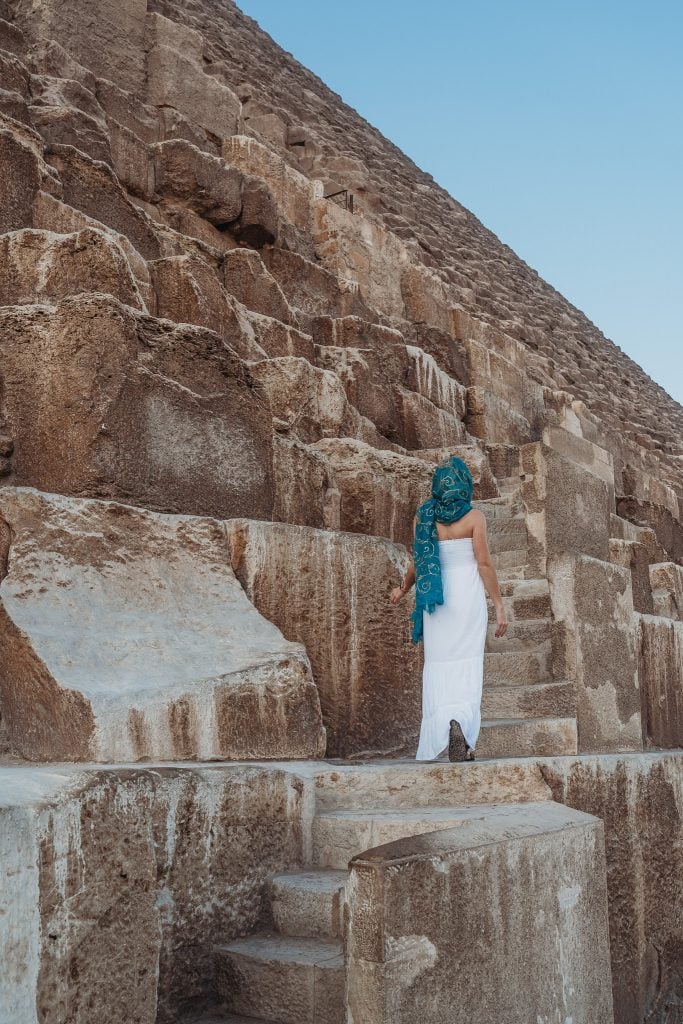 Climbing up the Great Pyramid, but not inside…

The unique thing about the Giza Pyramid Complex is that there’s almost free rein. As with any big site, there are spots that are closed off, but I never imagined how many little alleyways there were that would offer incredible – and unique – views of the Pyramids. 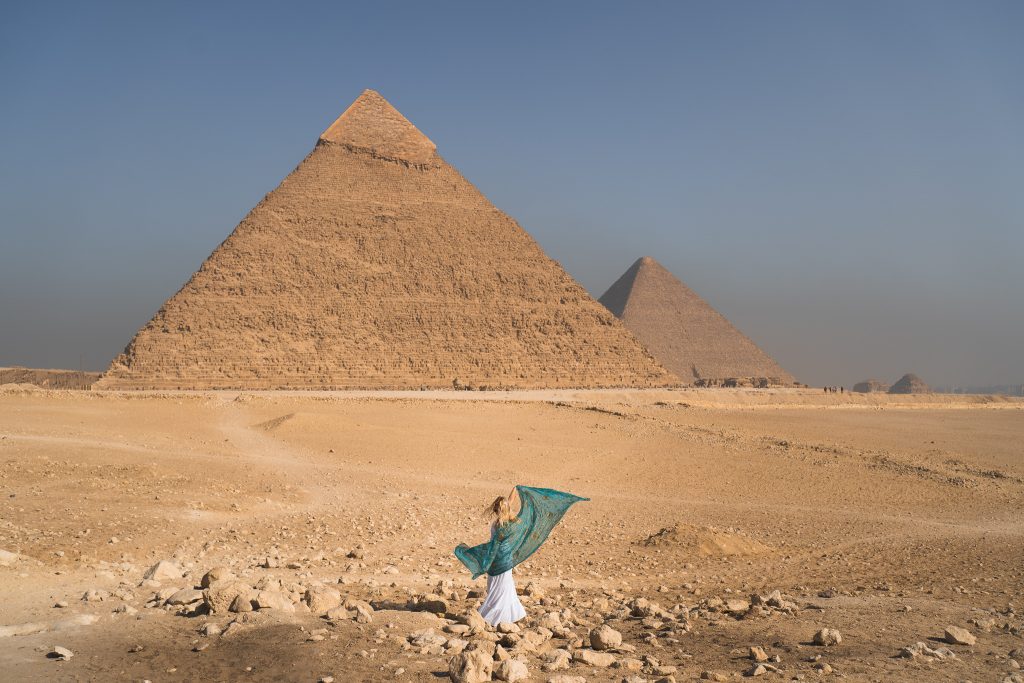 There's certainly something magical about visiting the Pyramids!

The Egyptian Pyramid Complex consists of three main pyramids: The Great Pyramid (also known as the Pyramid of Cheops), the Pyramid of Khafre, and the Pyramid of Menkaure. Respectively, they stand at 147 m, 134 m, and 62 m. There are also three Queens Pyramids on the premises.

I never thought that I’d have the ability to avoid crowds when I was visiting the Pyramids, but it was remarkably easy — as long as you have a guide who knows where to take you 😉 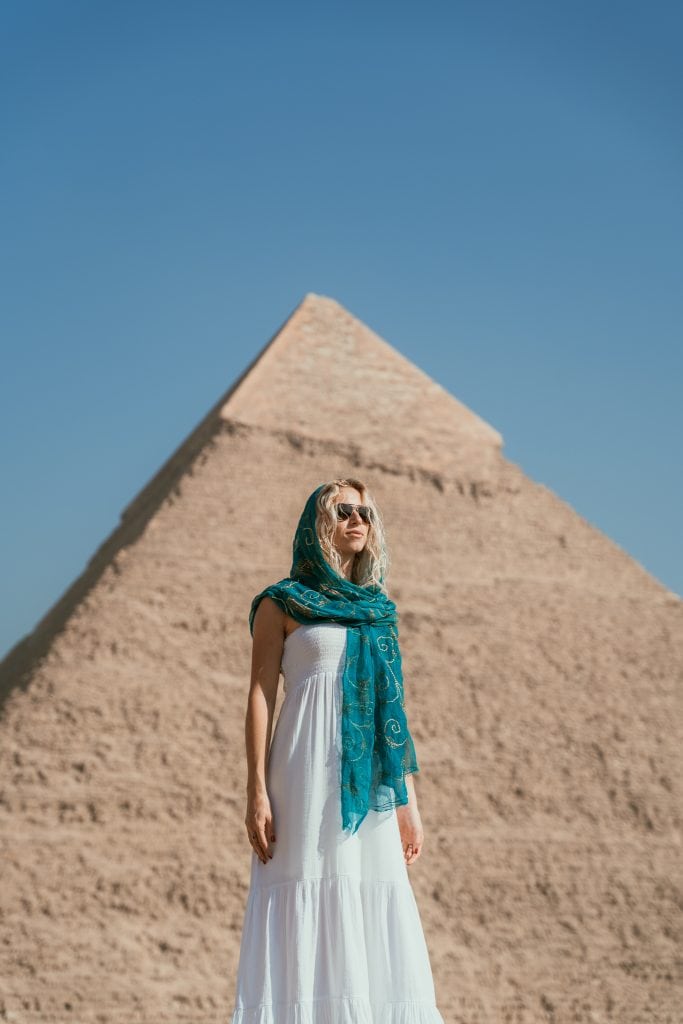 Never thought I'd have the opportunity to take a picture like this!

Did you say the Pyramids and Sphinx?!

In my head, I always considered the Pyramids and the Sphinx to be one in the same. The Great Sphinx of Giza, however, is considered a monument and has a completely separate entrance (although, it’s included in the cost of admission for the Pyramid Complex). The Sphinx was made of one carved piece of stone and has three tunnels underneath the monument. While we don’t know exactly what they were for, archeologists presume that they were used for offerings. For those wondering, the lion’s body of the Sphinx is a symbol of strength, while the King’s head is a symbol of wisdom. 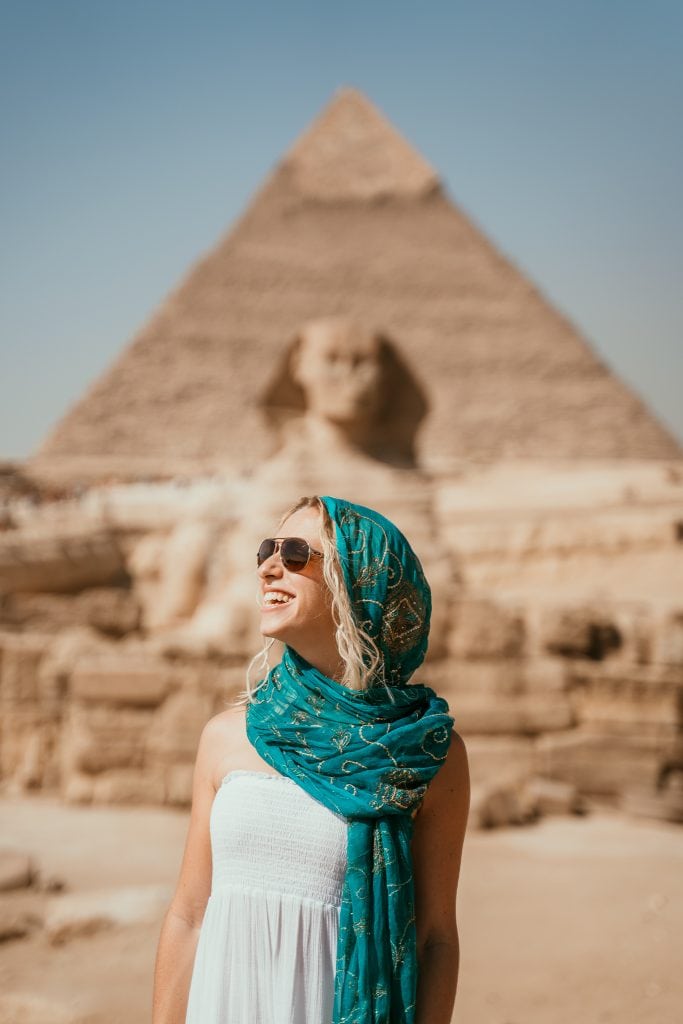 That iconic Sphinx shot when visiting the Pyramids

Visiting the Pyramids: The Oldest Pyramid in the World

I also wrongly assumed that the Great Pyramids of Giza were the original pyramids in Giza but, nope… those can be found in Saqqara! The oldest stone building complex in the world can be found at Saqqara in the shape of Djoser’s step pyramid. The complex has various tombs, with the oldest dating back to the First Dynasty. 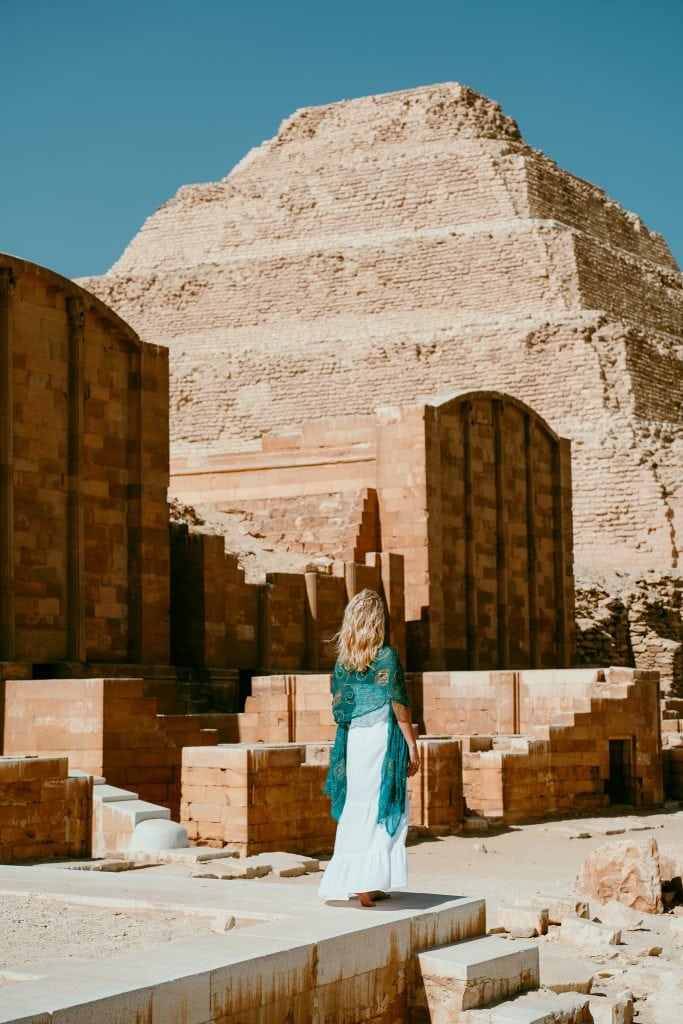 Checking out Saqqara on our Egypt Pyramids Tour – the oldest pyramid in the world!

While the Great Pyramid of Giza is completely empty inside, the tombs at Saqqara are colorful and detailed. The most well-known would be the Pyramid Complex of King Teti, where you crawl down a tunnel and into the pyramid to see the hieroglyphs inside the tomb and sarcophagi. There are plenty of accessible tombs on site though, and I recommend having a good wander. 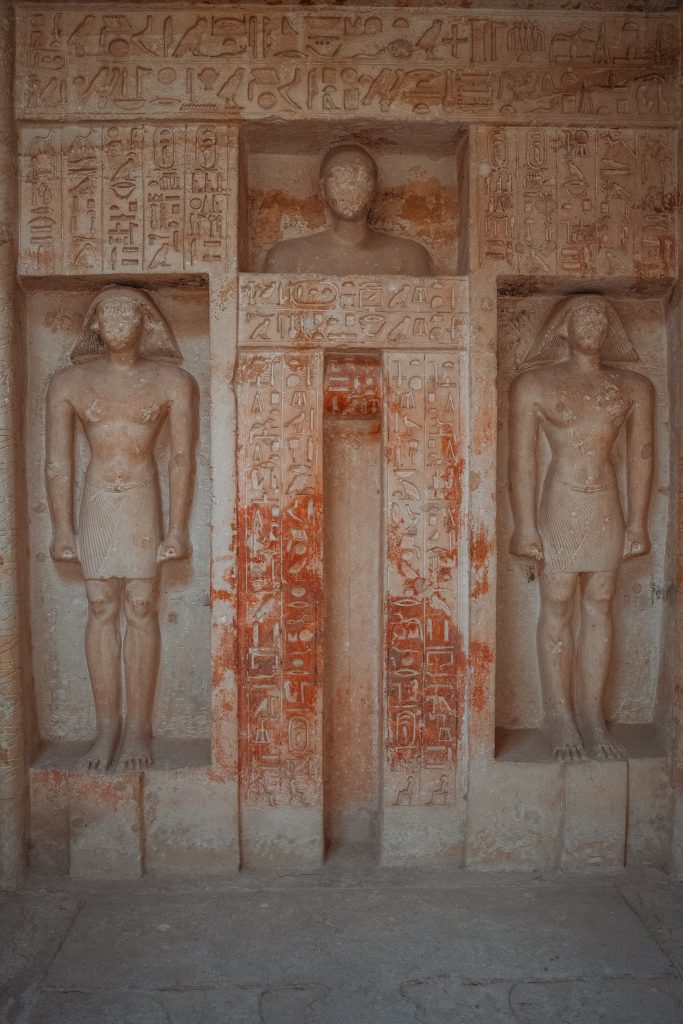 A tomb at Saqqara that still retains some color

There have been many archeological findings at Saqqara in recent years, with three discoveries in the last 12 months alone. Saqqara is certainly a worthwhile stop on your Egypt Pyramids tour.

To close off our Egypt Pyramids tour, we stopped in Memphis, Egypt’s ancient capital city during the Old Kingdom. There are many temples on site, but arguably the most interesting thing to see in Memphis is the 10m (33 foot) Statue of Ramses II carved out of limestone. The statue is lying down because the base of it was broken, but the details of the colossus are just incredible! 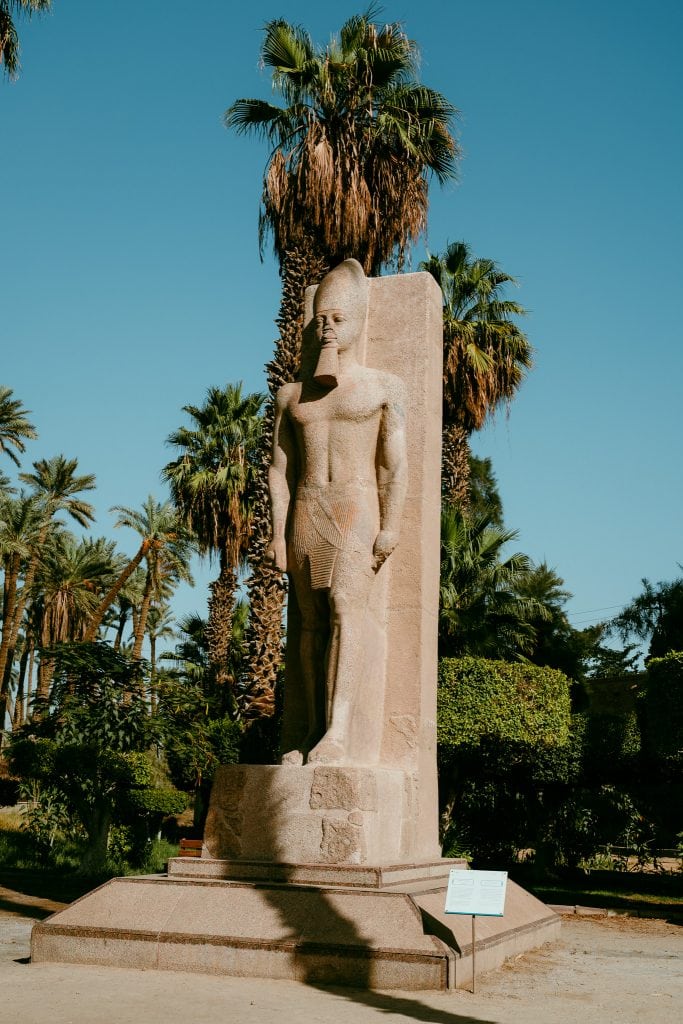 A “small” statue in Memphis

Map of the Pyramids & the Great Sphinx of Giza

I definitely recommend hiring a guide for your Egypt Pyramids tour, as you cannot walk from one location to the next. We drove between every destination, and I pinned them for you on the map below. As always, feel free to leave a comment with any questions!

The Great Sphinx of Giza

When planning my trip to Egypt, I figured out all of the sites that I wanted to see, but realized that I didn’t actually know what to wear in Egypt! Unlike places like Oman, you do not need to be covered wrists to ankles, nor do you need to have your head and shoulders covered at all times (unless, of course, you’re entering a place of worship). That said, it is important to adhere to local cultures and customs, so I do recommend wearing moderate, loose-fitting clothing. It’s particularly important to have a sun hat to keep away those rays, sunblock, bug spray wipes, and comfortable walking shoes (I fell in love with these and used them daily). To view my travel packing list, with all of my travel essentials – and I mean all  of them – head on over to this article I wrote to pick and choose your favorite items!

Do You Have Travel Insurance?

You need travel insurance if you want to visit Egypt! As a rule of thumb, you should always have travel insurance when you leave your home country. Travel insurance is arguably the most important thing to have on hand (after your passports and visas). I’ve had to use my travel insurance multiple times on the road, even though I’m healthy. You never know when something might happen; take comfort in knowing that whether your flight gets cancelled or you wind up sick and in the hospital, you will be covered. For any place that has faced a series of destabilizing events in recent years, be sure to select a plan that covers terrorism and political unrest. While I felt entirely safe in Egypt, as with anywhere in the world, you never know what could happen and it’s always better to be safe than sorry! I recommend World Nomads Travel Insurance for each and every one of you, as I used them on my most recent trip to Egypt too.. You can get a free quote here. 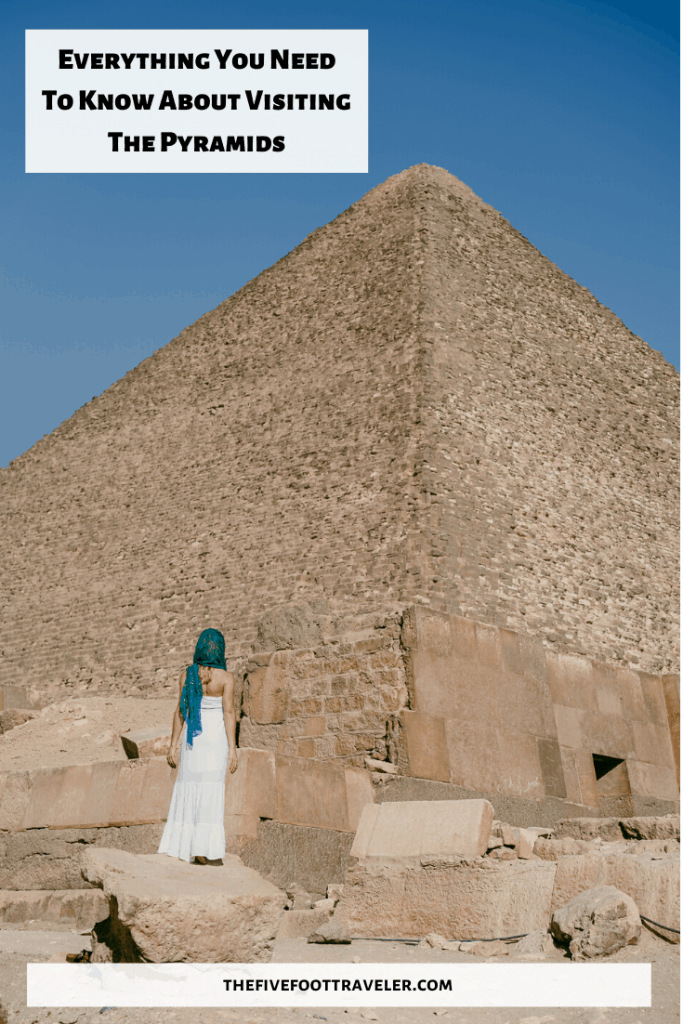