After 3 incredible days in Bhutan, I awoke with great anticipation, for the day to climb to the Tiger’s Nest Monastery had finally arrived. My excitement was tempered, however, by a glance out the window. All week we had beautiful sunny weather. This day dawned extremely overcast with a significant chance of showers — not exactly ideal conditions for a long steep hike in altitude. But it was now or never; so we all agreed to give it a shot (and eschewed the “lazy” approach of riding horses the first half up).

The Ascent to Tiger’s Nest Monastery

Arriving at the setting off point, we could not even see the monastery up the cliff face as it was obscured by the clouds. Suddenly the clouds parted sufficiently for us to catch a glimpse of our goal half a mile above our heads. And just as suddenly the clouds returned to envelope it in a very mystical mist. 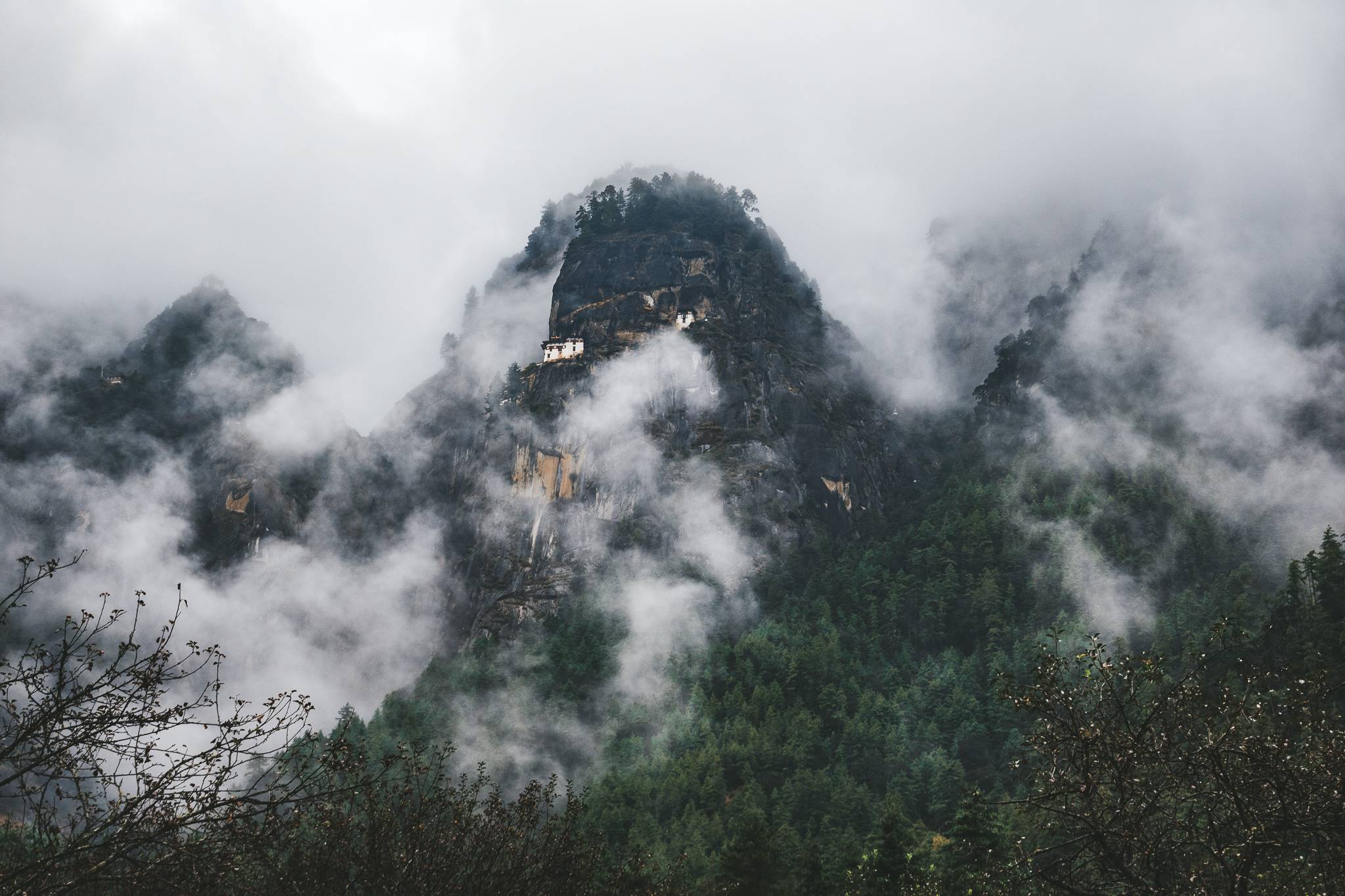 So we began the long arduous climb. The Paro valley receded into the distance below us rapidly. Due to the altitude you may need to factor in need several breaks to catch your breath and take some water. Midway we encountered a pretty steady drizzle, making our footing more slippery and a bit more difficult. 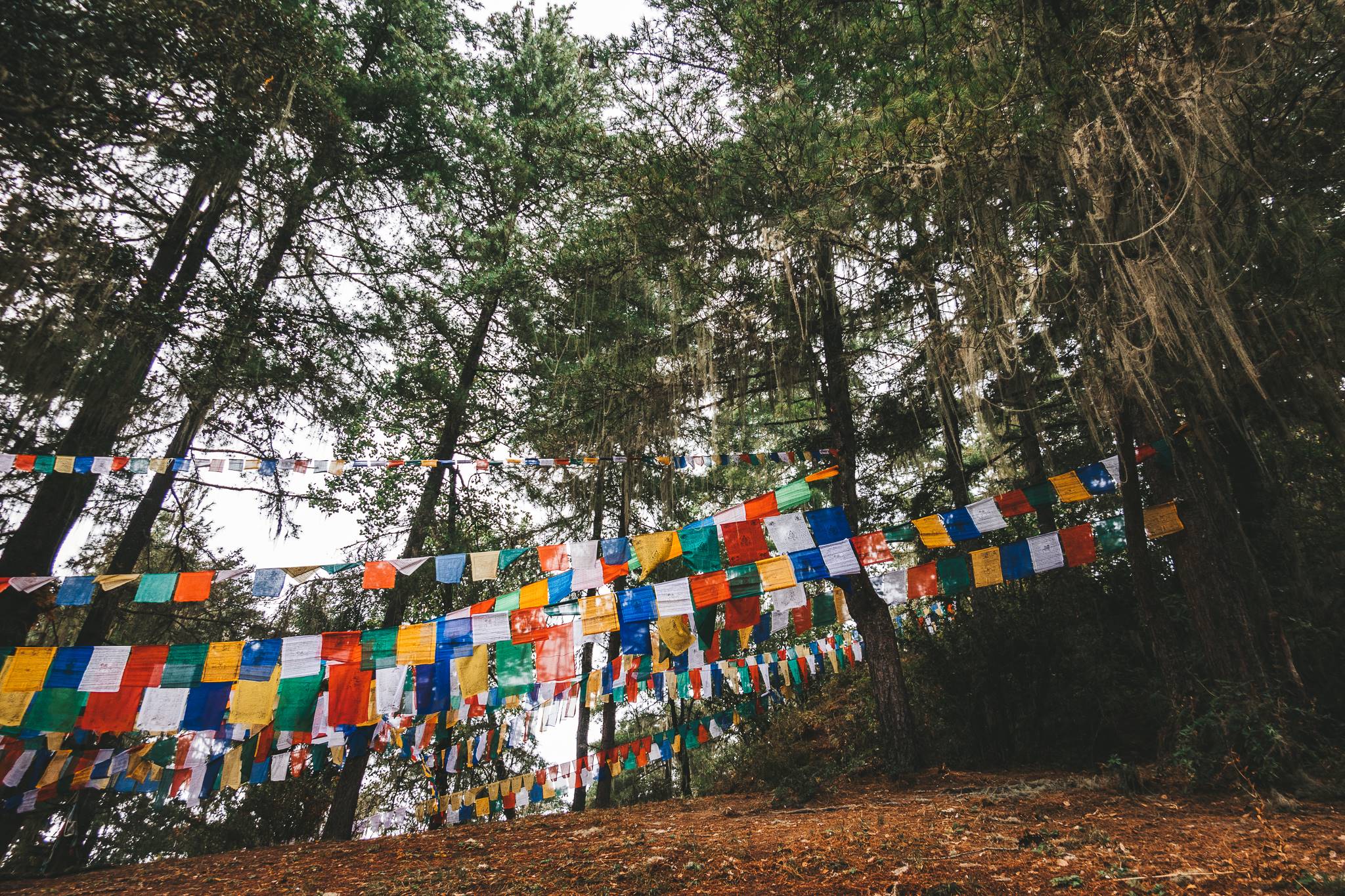 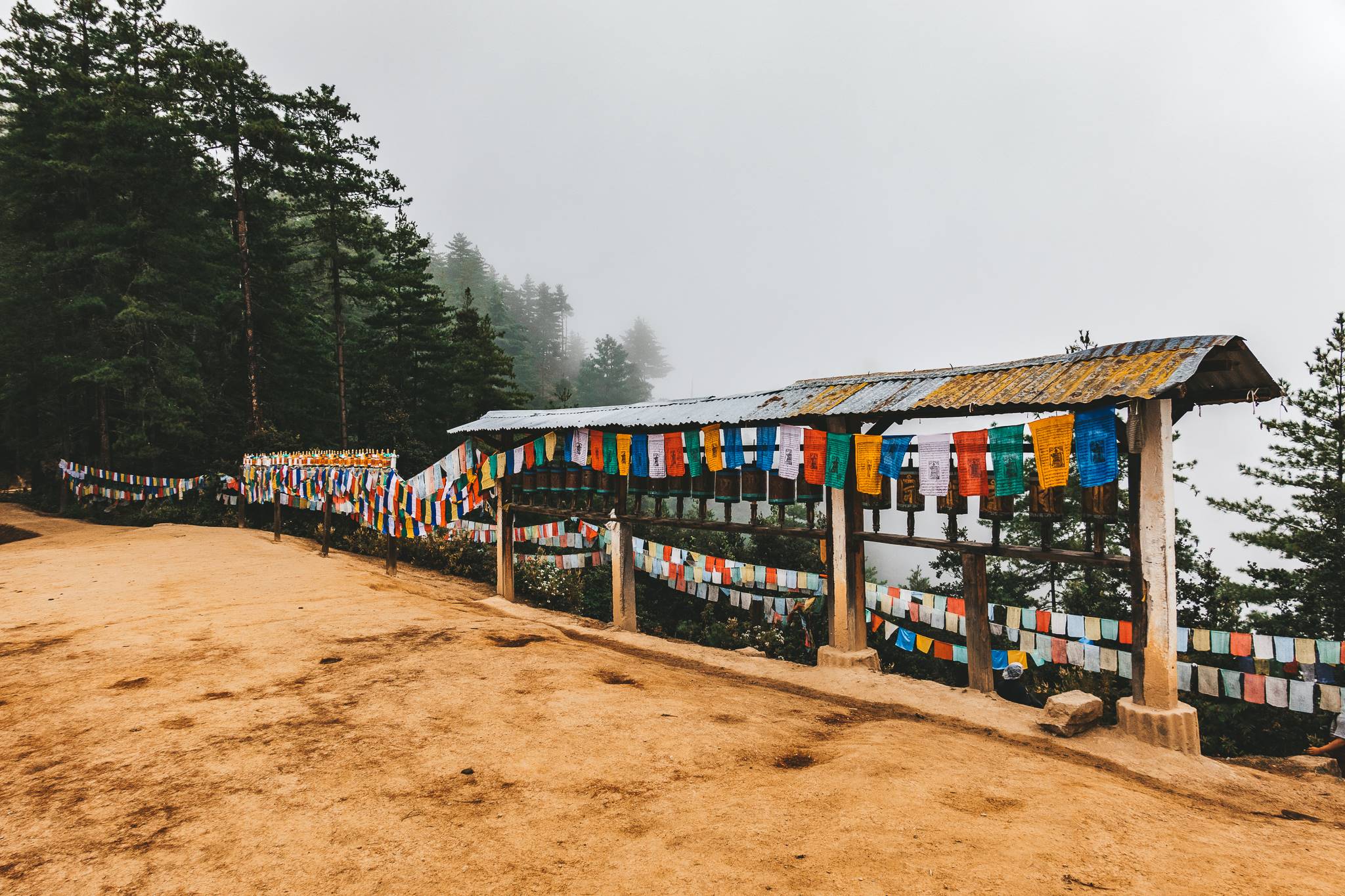 It was fascinating to watch the clouds rolling up the steep slope, occasionally parting to offer a glorious and tantalizing view of our goal. Two hours later (minus the photo ops) we arrived at the monastery's front door. 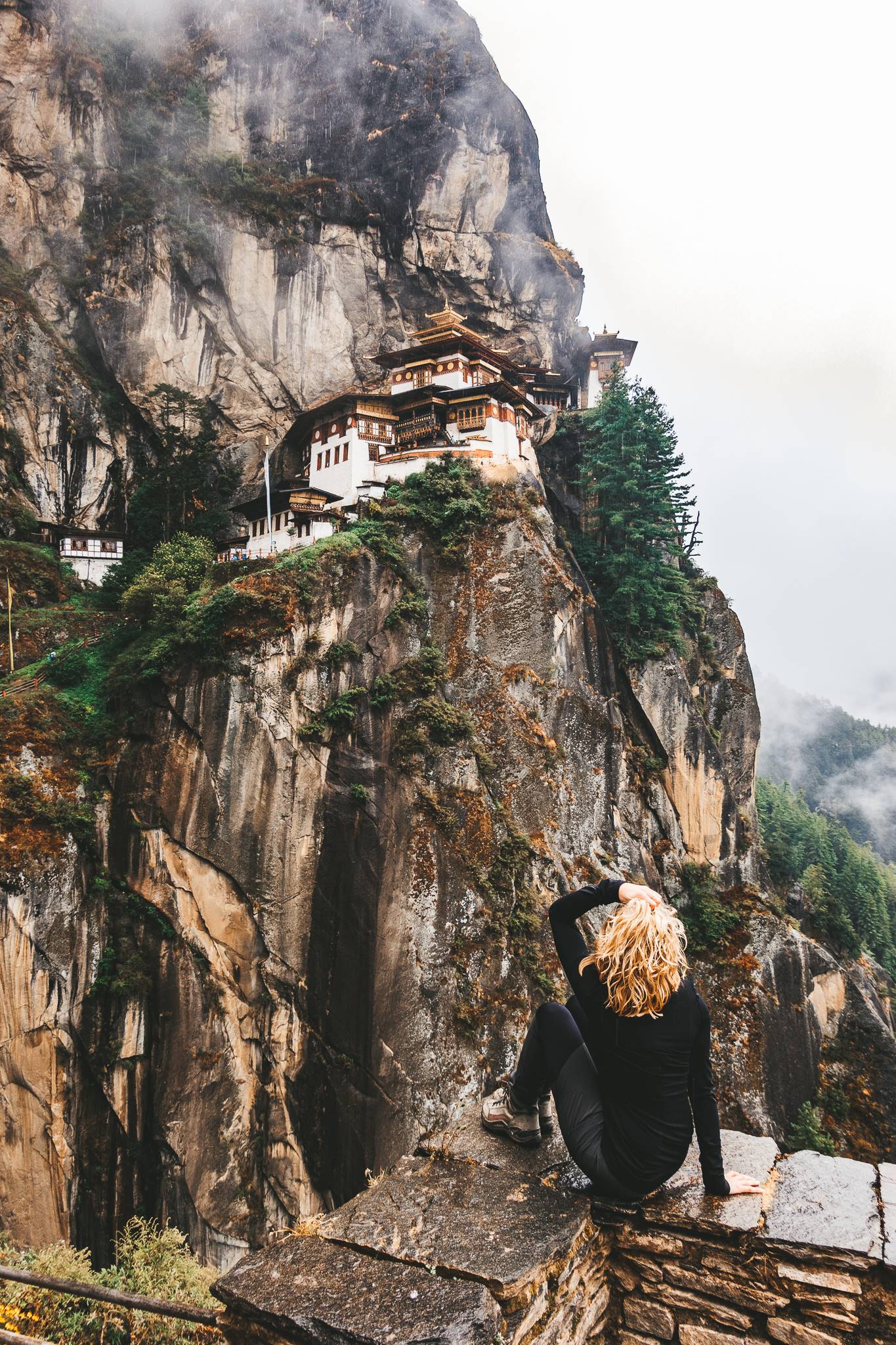 The spirituality of the place was palpable. Our guide gave us a tour of the various rooms and explained the fascinating history of the place. We were incredibly impressed by what had to be a nearly impossible construction project so many centuries ago. Unfortunately, you cannot take any photos once you reach the monastery, and you will be asked to keep all of your belongings in a locker during your visit. 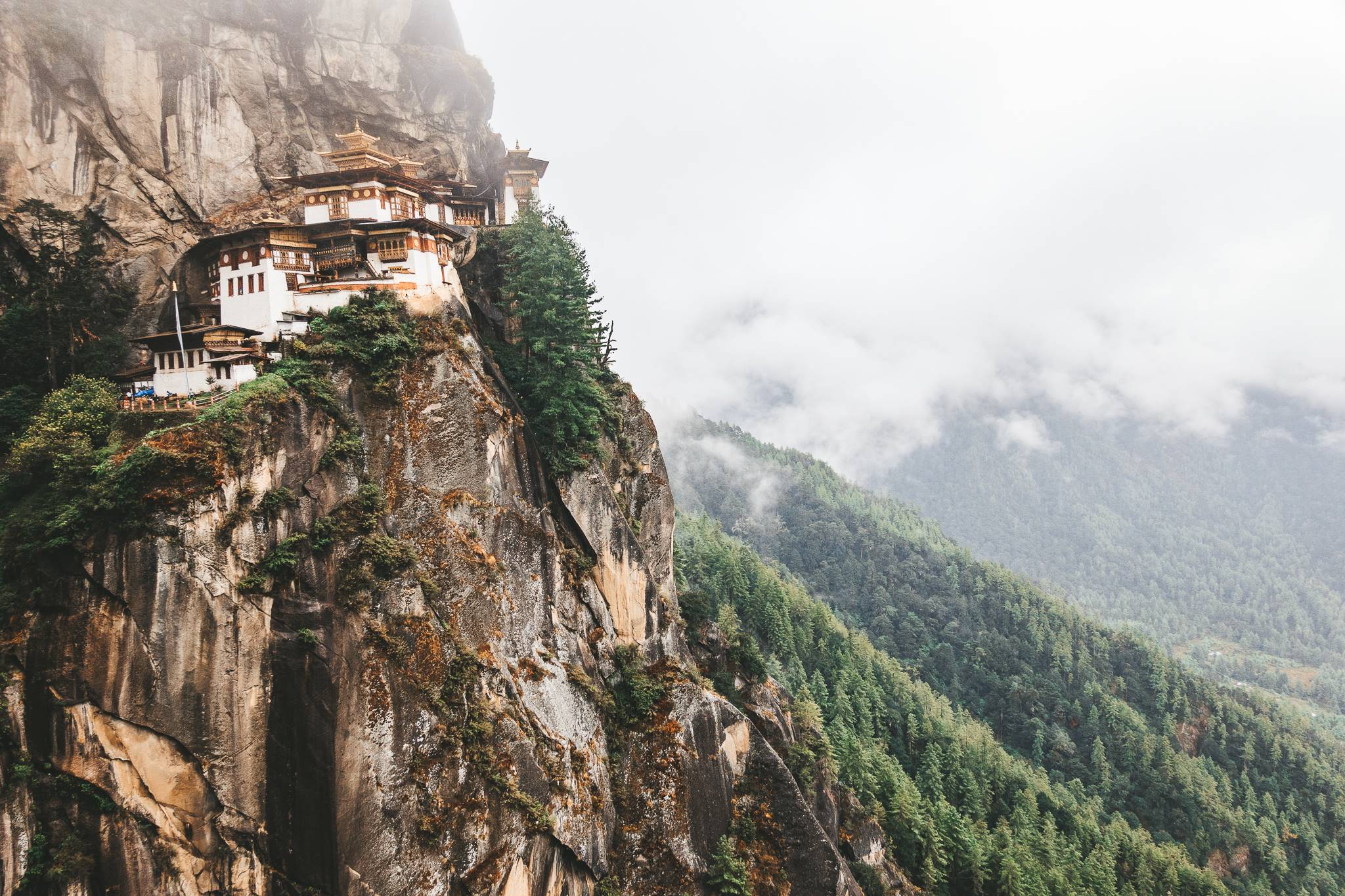 The Descent from Tiger’s Nest Monastery

Then it was time to head back. Despite the ongoing drizzle we made pretty good time going down, including a lunch break at the cafeteria with a great view midway down. 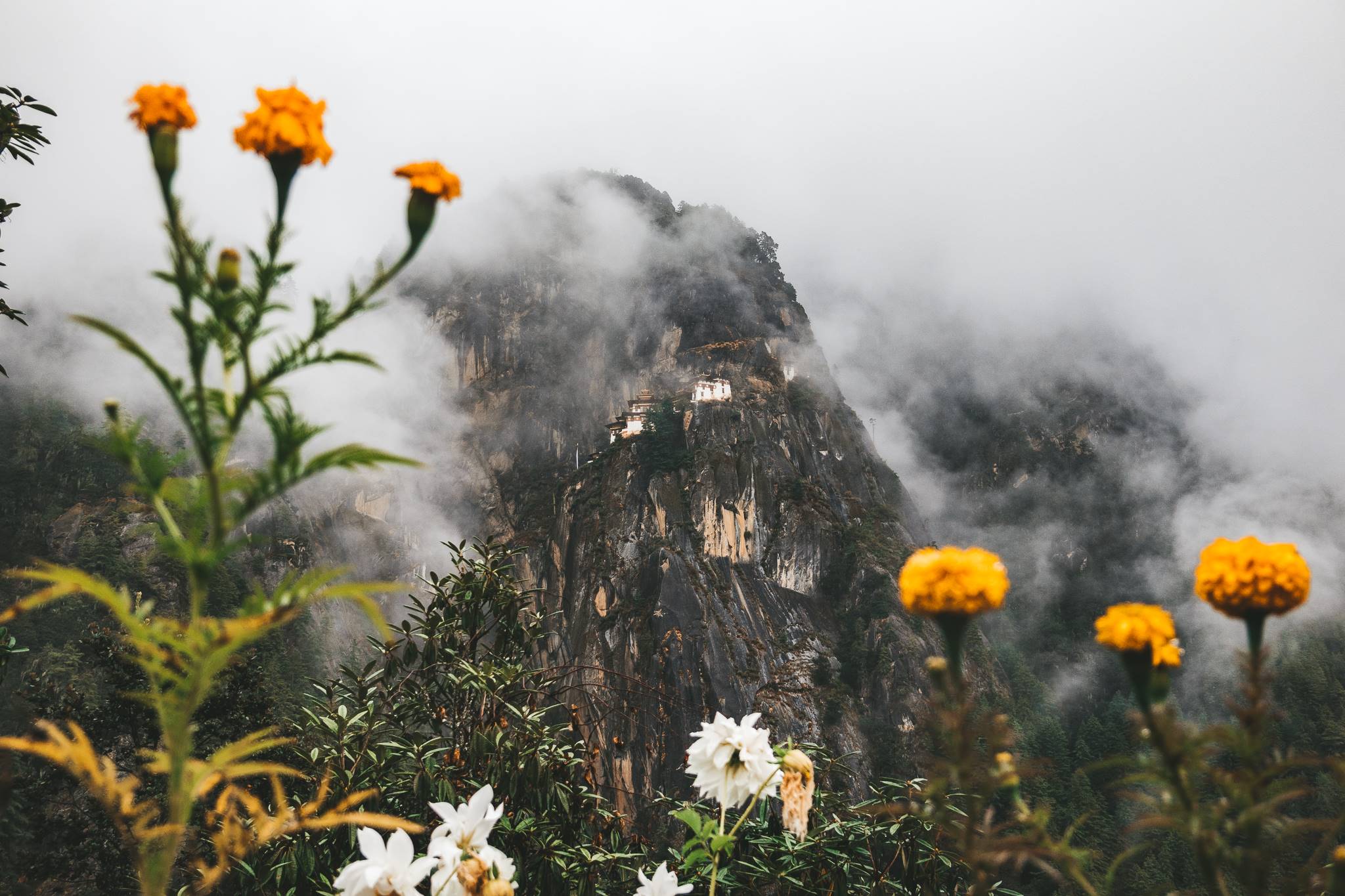 We reached the bottom totally exhilarated from the experience. It turned out to be all I had hoped it would be. 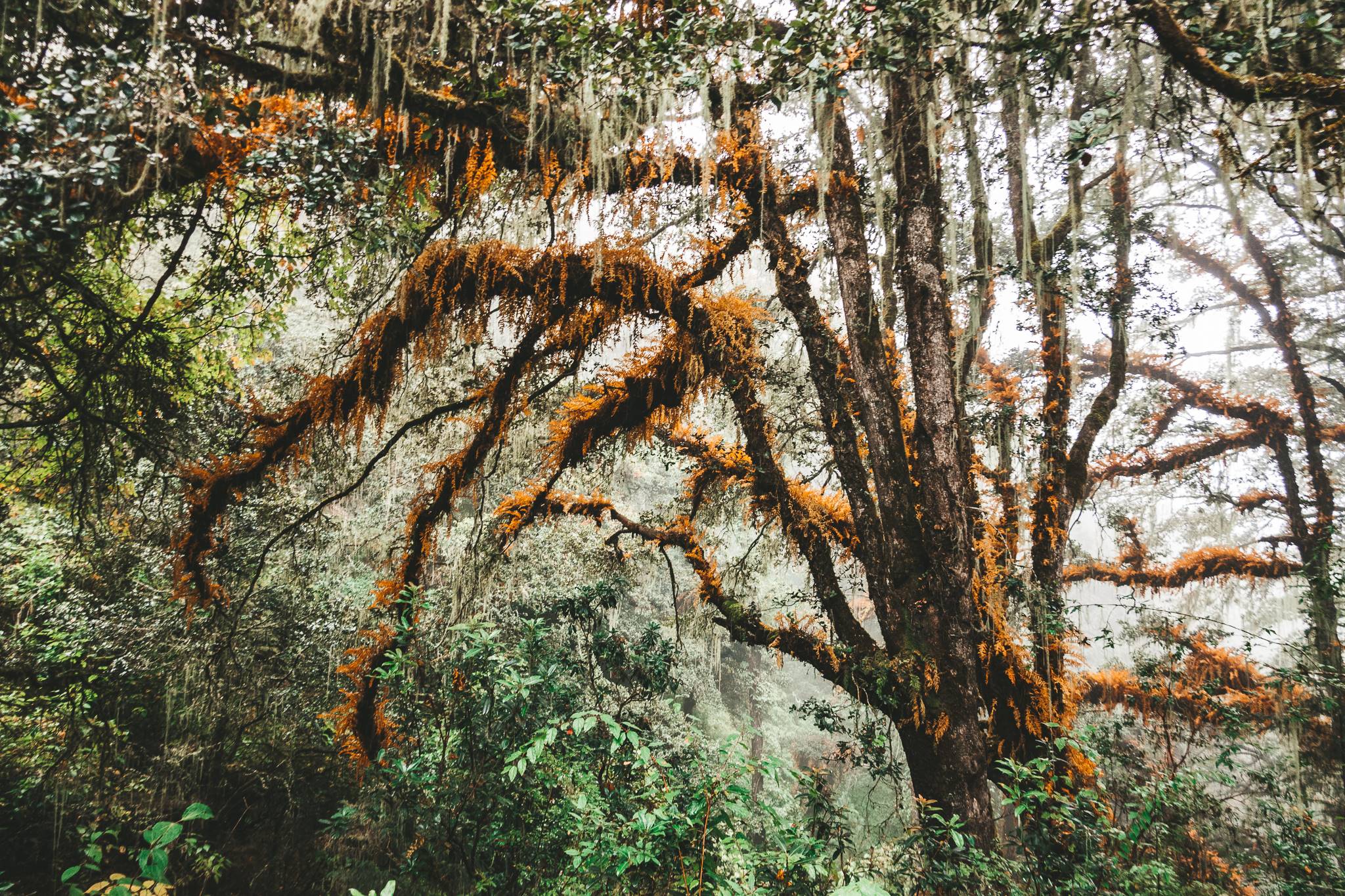 While we were very tired, this was not yet the end of our day. Our next stop was the Kyichu Monastery, the oldest in all Bhutan. Built in the 7th century (yes, the 600’s!), the original building was never destroyed. A set of footprints remains embedded in the stone floor; legend has it that a woman with leprosy came to pray for a cure and, after prostrating herself 100,000 times, wore down the stone. Oh, by the way, she was cured! 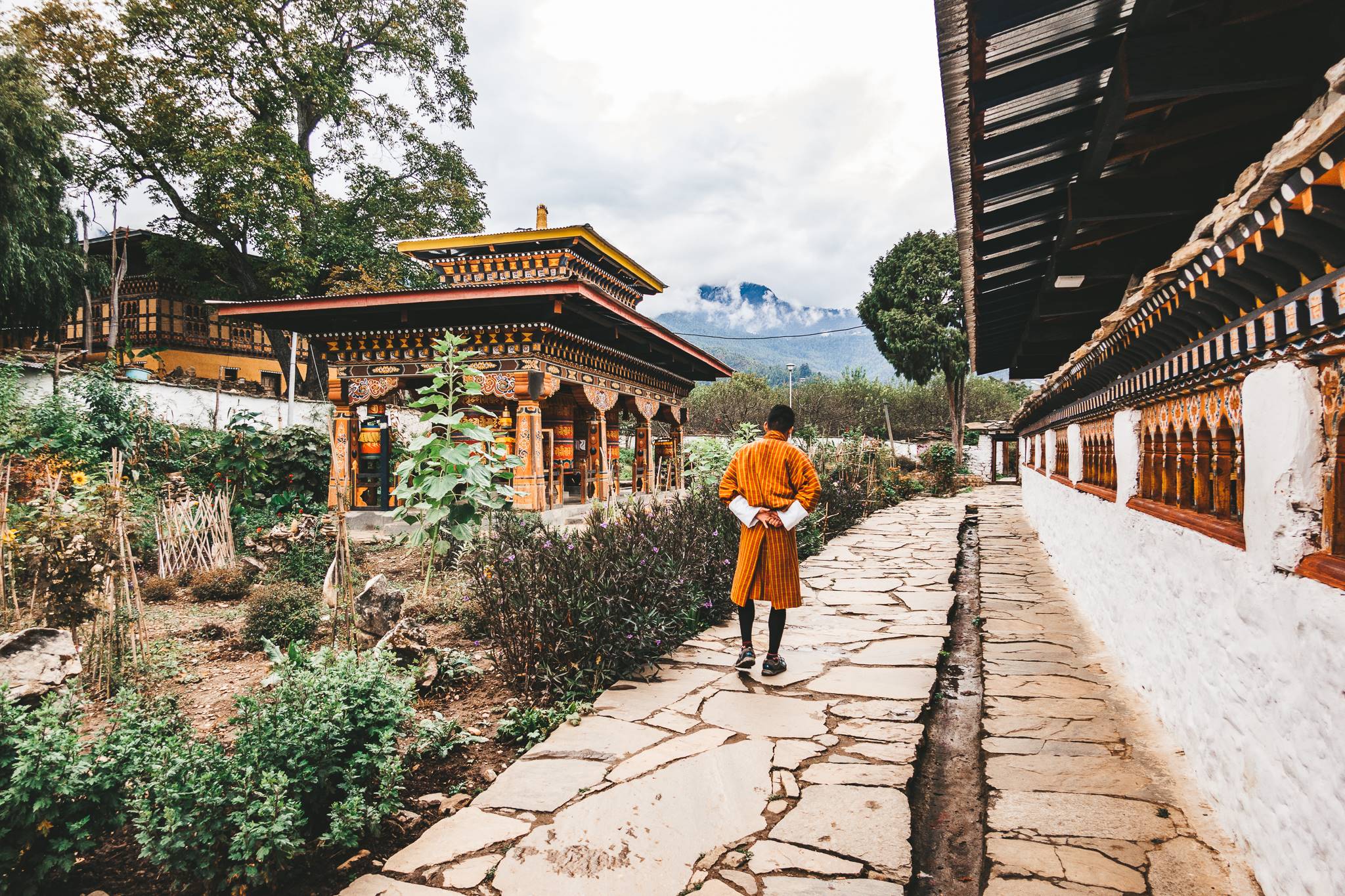 Our final stop was an old Bhutanese farmhouse for dinner. The “appetizer” was a traditional hot-stone bath. We watched our stones being heated in the fire until red-hot. They were then loaded into the end of our individual wooden tubs, separated from us by wooden boards. The water got very hot very fast. After our earlier hike, it was incredibly relaxing. The tubs are not very big, but that was no problem for this Five Foot Traveler! 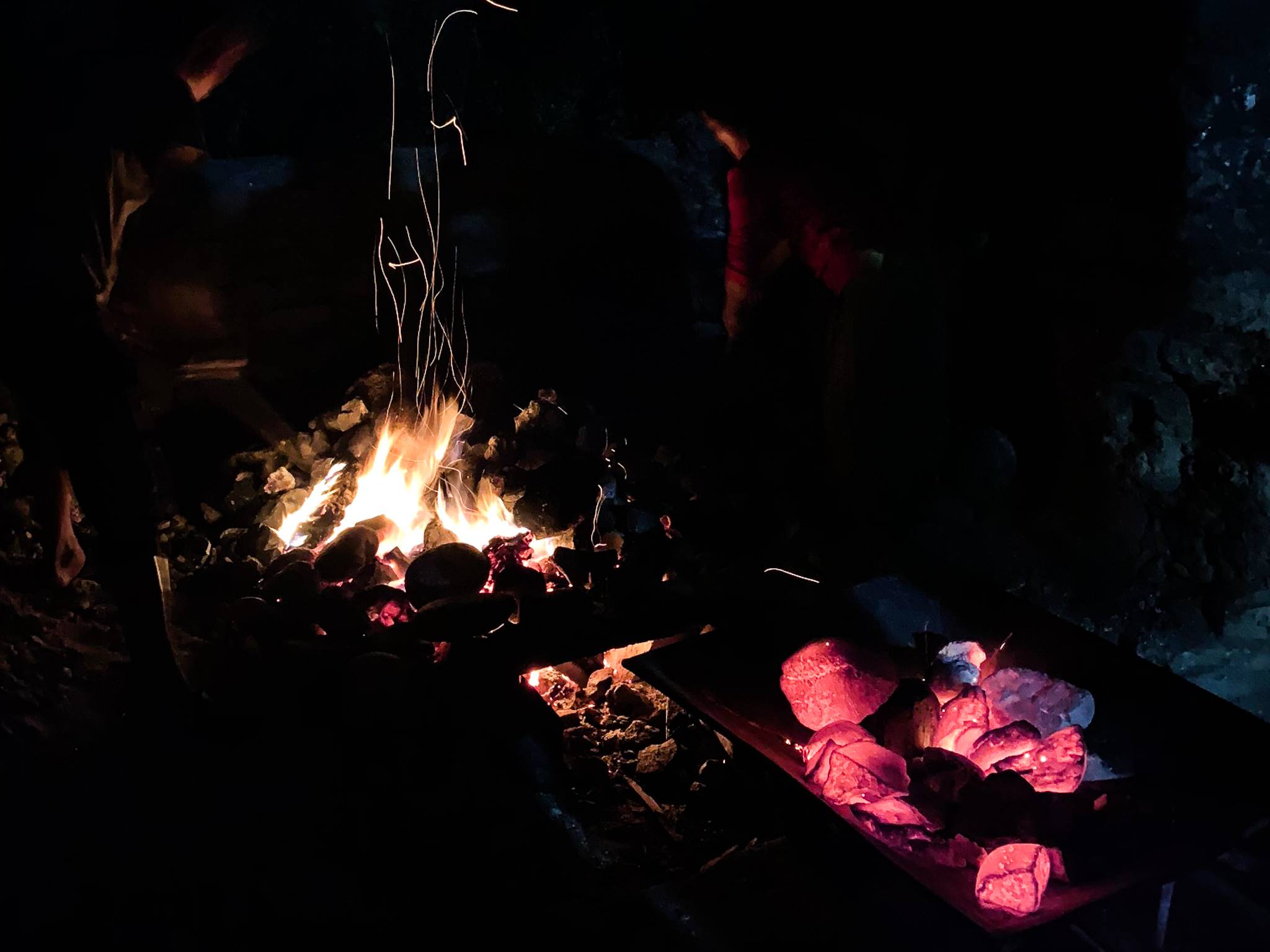 After dressing we shared a delightful dinner of traditional local foods with other visitors from Singapore (from which I only recently returned — but if you’ve been following along, you already know that) and China. The food and company were good, but even better was returning to the hotel for bed.

Sadly, we had to depart the following morning (although the prospect of two weeks in India was not so awful). Our guide, Tula. and driver met us nice and early for the drive to the airport, and approaching it reminded us again of just how beautiful it was. Bidding them farewell, we passed through the check-in process speedily and soon were winging our way to Delhi on that breathtaking flight past the Himalayas. 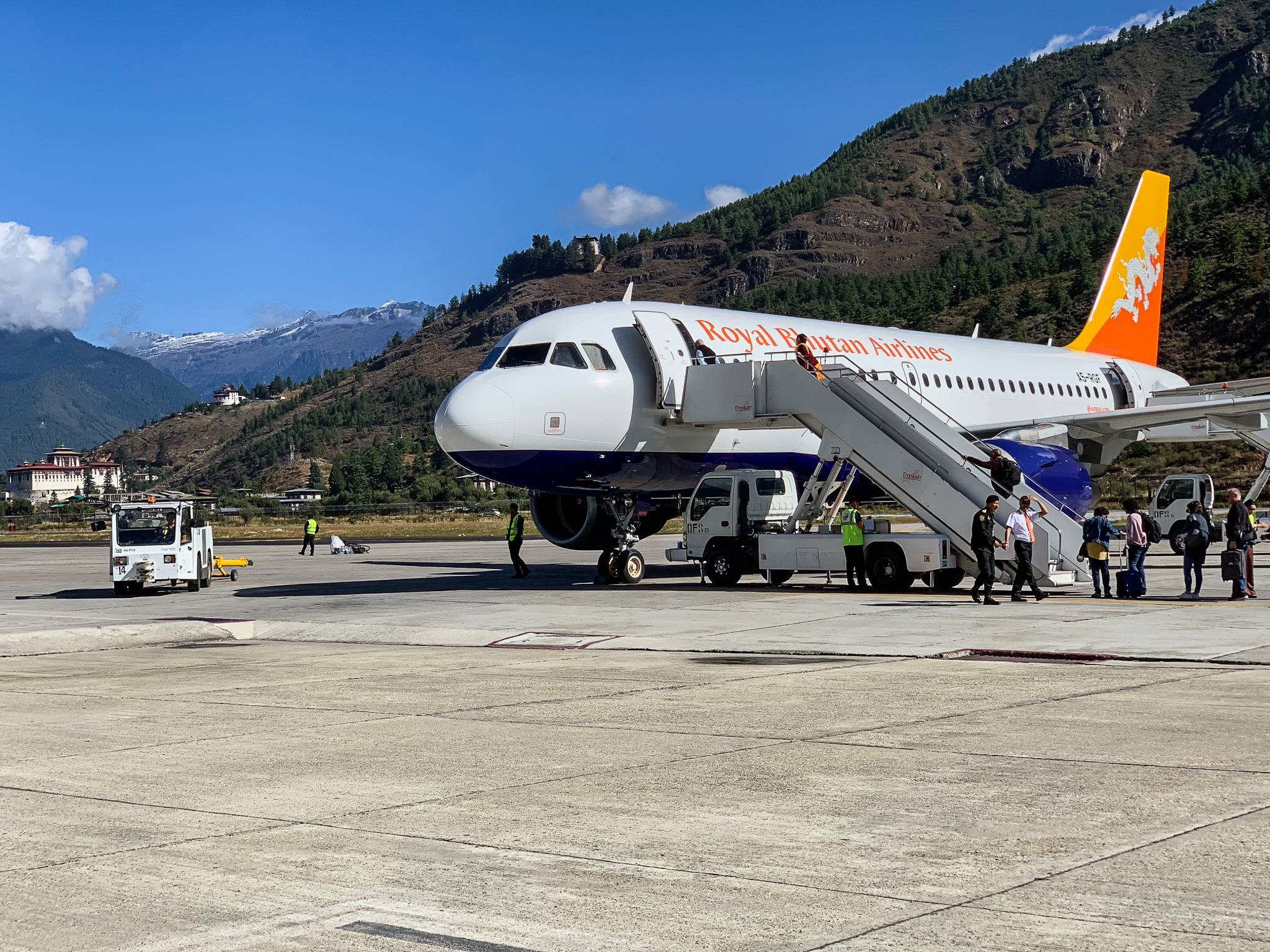 I must say that the Royal Kingdom of Bhutan is one of the world's great treasures. The people are nice and polite and smiley, the landscape is gorgeous, and the historic sites are beautifully maintained. It is well-governed, and tourists are not permitted to overrun the country. The visa cost is high at $250 per day, and nearly all tourists are required to engage guide service in order to obtain the visa, yet I cannot recommend a visit to Bhutan more strongly; there was not a single negative aspect to our trip. And If you must engage a service, I cannot recommend more highly the capable, friendly people of Bhutan Mountain Holiday. You will not be disappointed! 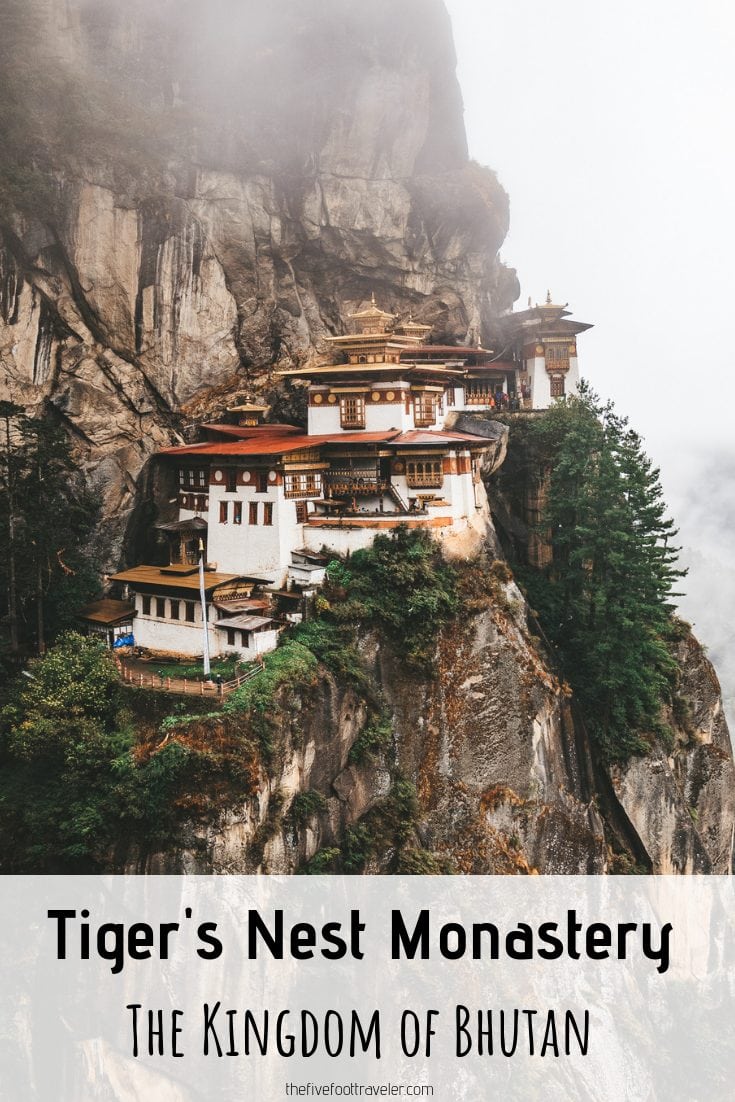