From Ho Chi Minh City, we flew to Cam Ranh in search of off-the-beaten-path gems. Originally we had planned to stay in the ever-popular beach town of Nha Trang, but upon further research, we realized that we didn’t want to be in a big city alongside the beach; we wanted something a little less touristy, which is how we ended up in Cam Ranh. 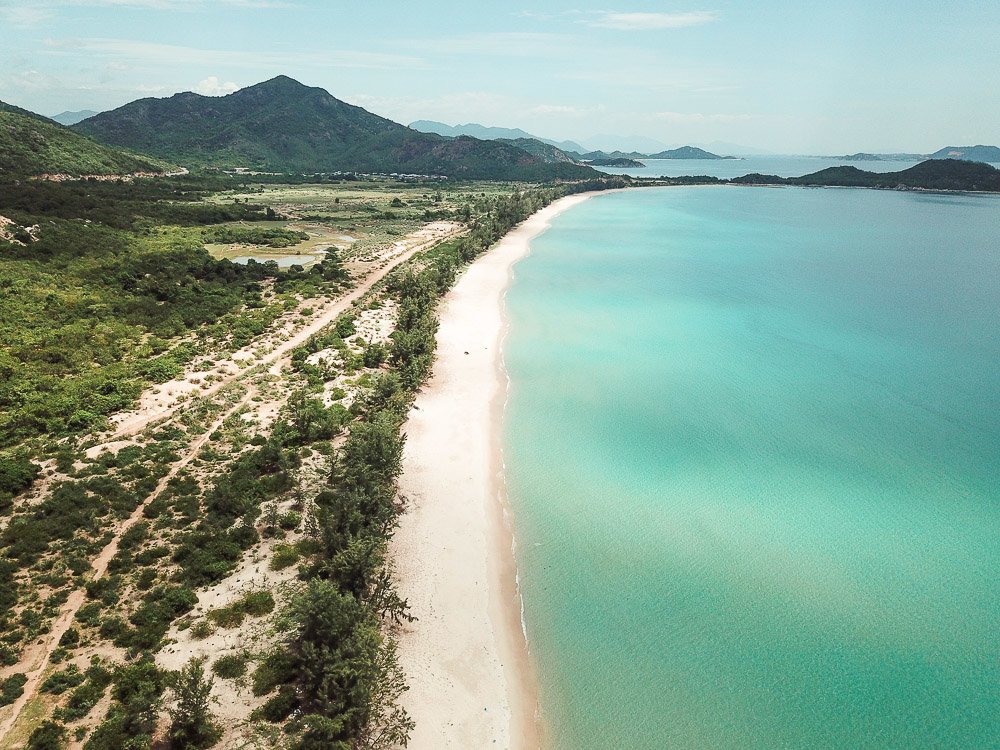 Cam Ranh, at first glance, is as local as it gets. You will not find any fancy hotels nor many sit down restaurants, and you certainly won’t find any English speakers, but what you get in return is so worth it: the Bien Tien – Vinh Hy Pass.

After filling up on some local street food, rent yourself a motorbike (and be sure there’s fuel) and hit the road heading south! The turnoff to begin the Bien Tien – Vinh Hy Pass is well marked and so worth the journey. You can spend as much or as little time driving the pass as you’d like, depending on if you want to swim at all of the crystal blue, empty beaches, or if you’re just taking in the views. 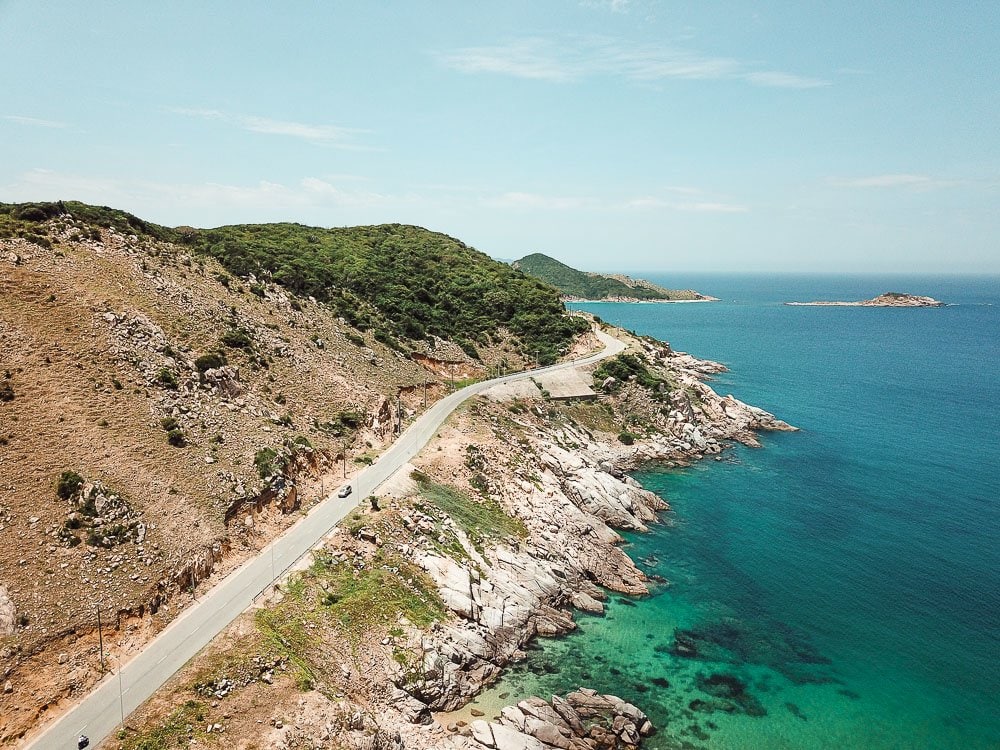 We did a bit of both and found ourselves spending about 5-6 hours exploring the breathtaking views and beaches to ourselves. It takes about one hour to complete the pass in one direction (from Bien Tien to Vinh Hy) and another hour to go the opposite direction. Whatever you choose, I would highly recommend taking a rain jacket with you, as it downpoured on us both days (yes, we loved it so much that we went back two days in a row). 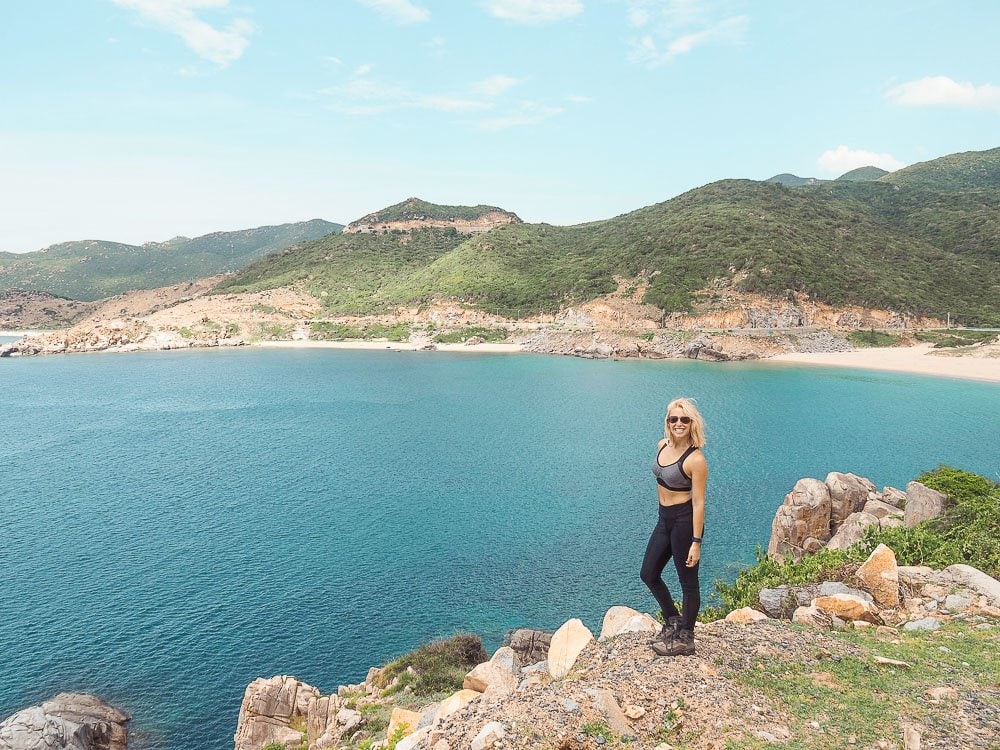 The Bien Tien – Vinh Hy Pass is surely the biggest attraction in Cam Ranh, but we are thrilled we spent two nights in Cam Ranh nonetheless.

Rather than staying in Nha Trang (like I said, it was just a bit too busy for us), we decided to take a day trip up there the following day, as it is only about one hour North of Cam Ranh by motorbike. You’ll see some massive developments beginning just 20 minutes North of Cam Ranh and continuing into the city; they aren’t joking when they say that Cam Ranh will, soon enough, be a hot spot in Vietnam! 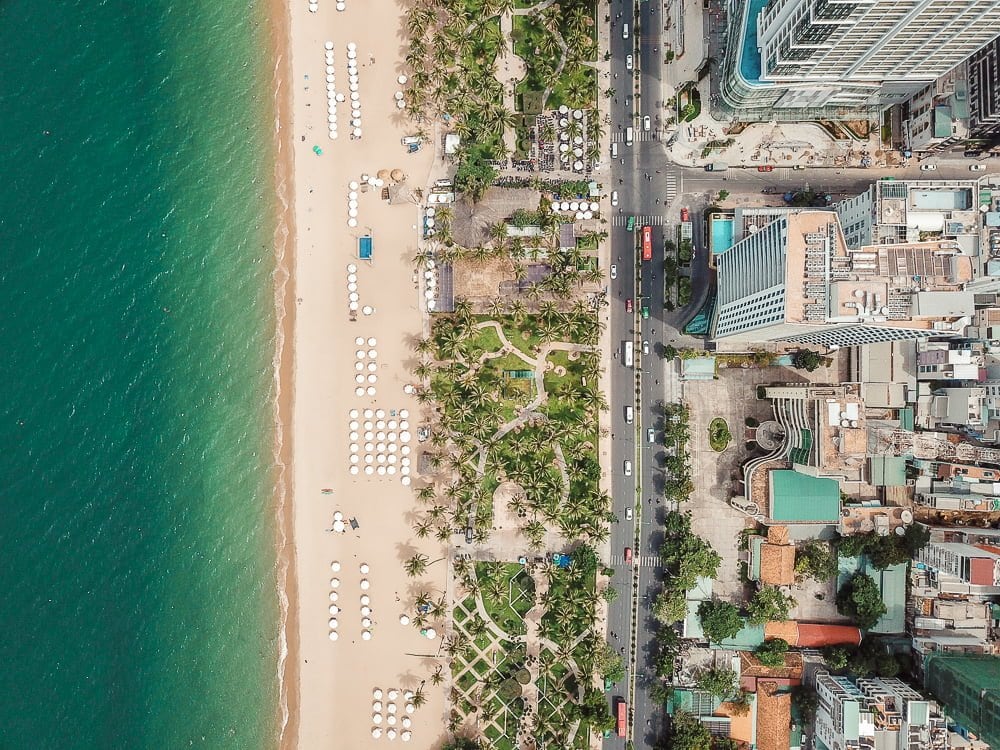 People tend to associate Long Son Pagoda with the 14-meter high white Buddha sitting on a lotus flower. In reality though, the Buddha is considered the Hai Duc Pagoda, which is situated above, and accessed via, the Long Son Pagoda (with 152 stone steps). The seated Buddha is visible throughout the city and offers a great view of Nha Trang itself. 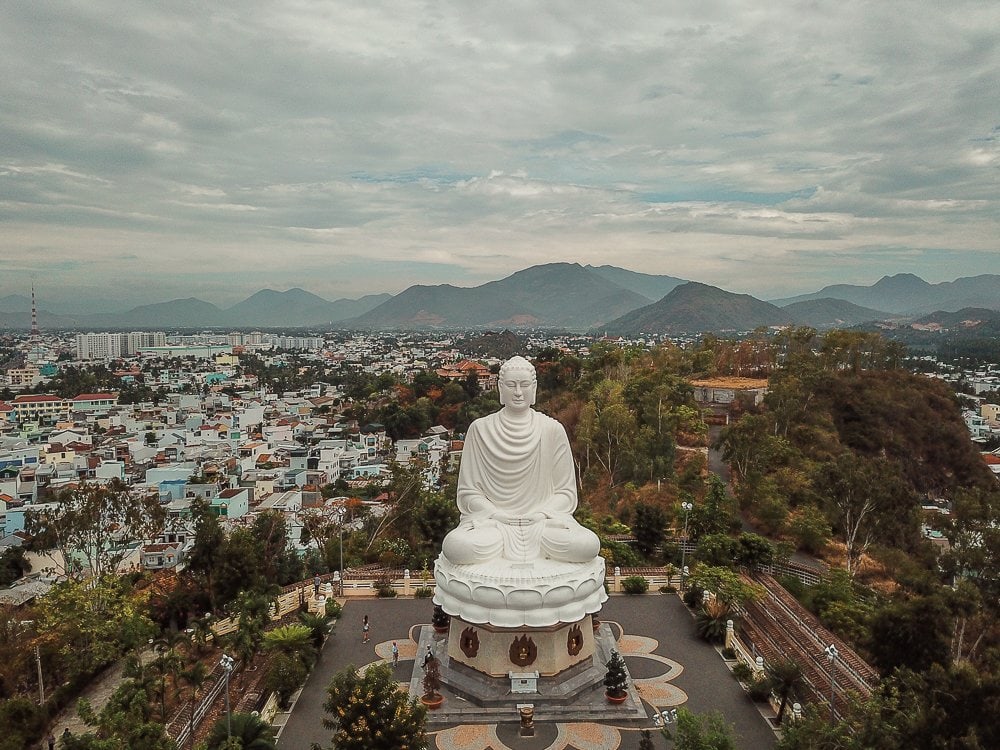 From the Long Son and Hai Duc Pagodas, hop on your bike for ten minutes until you reach the Po Nagar Cham Towers. Looking like something out of Tomb Raider, these towers were built between the 7th and 12th centuries. They definitely seem to be the biggest tourist attraction within Nha Trang, but it’s worth a visit. Despite the crowds, the Cham Towers are still actively used for worship by the Cham, Chinese, and Vietnamese Buddhists. As it is still active, you will be asked to remove your shoes and cover your shoulders and legs before entering any of the towers. 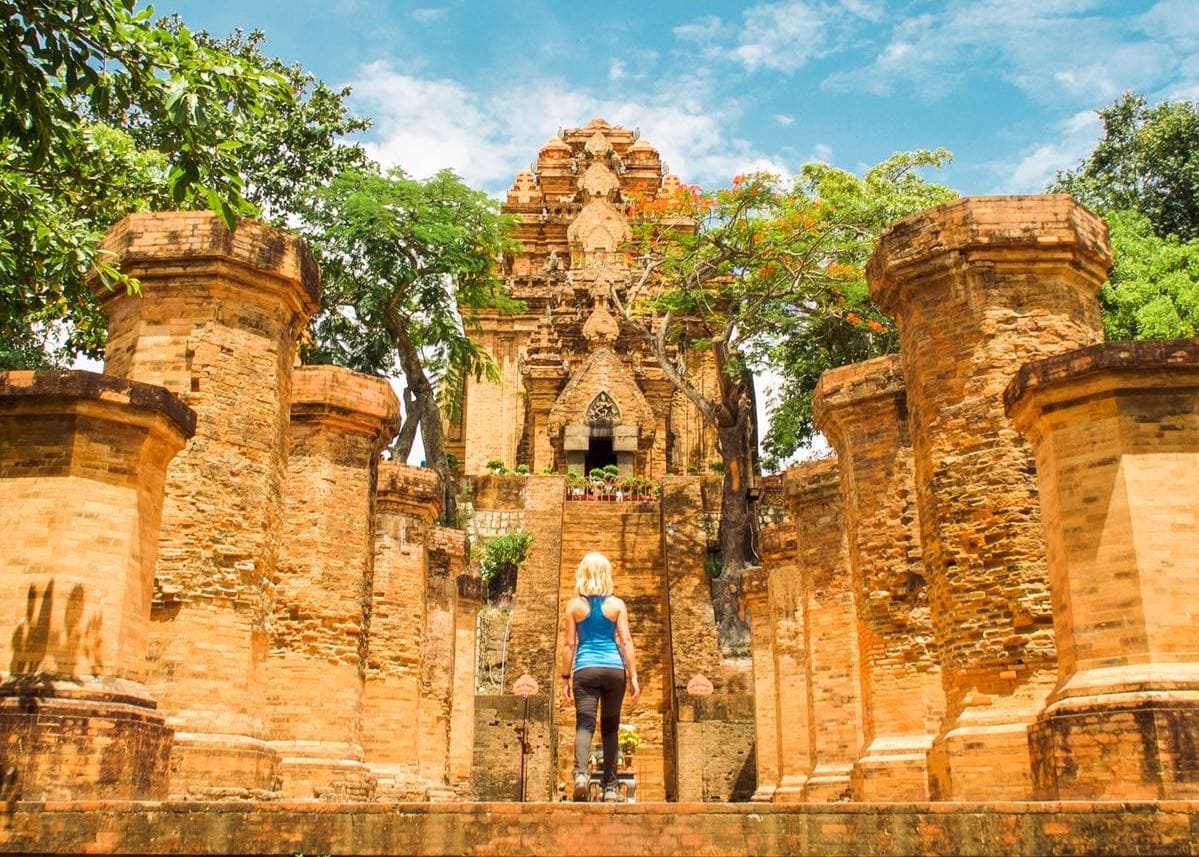 Today, there are only four towers remaining (two larger ones, and two smaller ones), but originally you would have found seven or eight towers at this site. 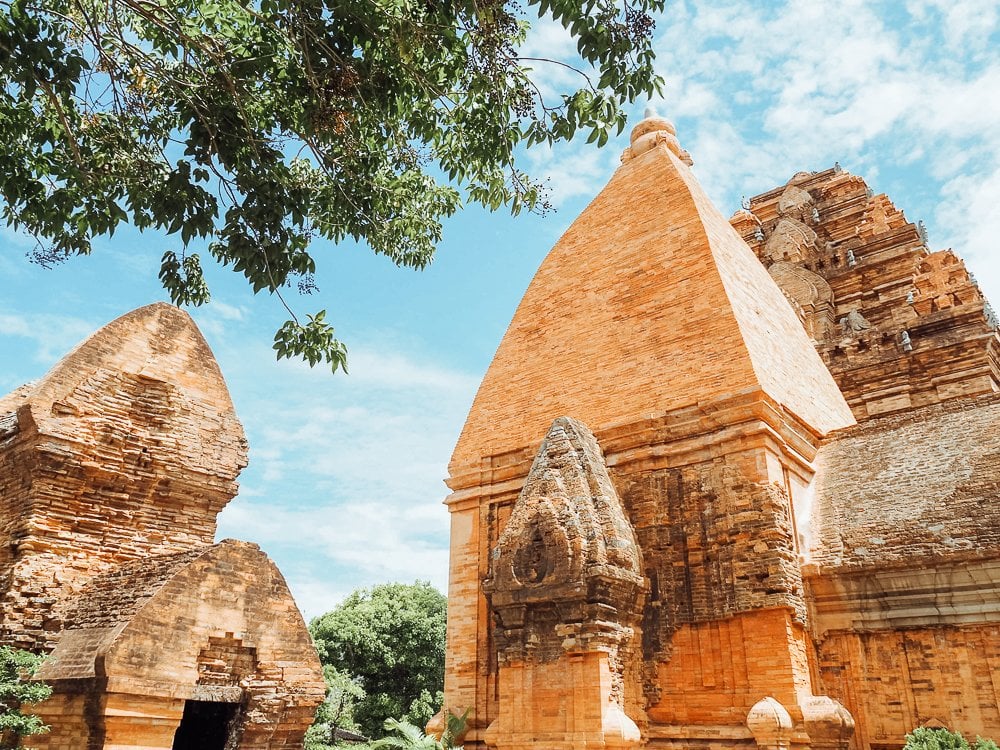 As you’re bound to be sweaty and sticky from site-seeing, head to Bai Bien, one of the most beautiful beaches in Nha Trang. Take a quick dip, soak up some sun, and then walk across the street to the Muong Thanh Luxury Hotel for a local Vietnamese meal. Walking into the lobby, we knew that we were in for a treat. We had a local, healthy smoothie (a blended mango, carrot, and lime… YUM!) before being guided to the restaurant. The staff then brought out a delicious family-style set menu that truly showcased all different kinds of Vietnamese food. Everyone we encountered was as friendly as could be, and we had trouble putting a dent into all of the food that we were served! 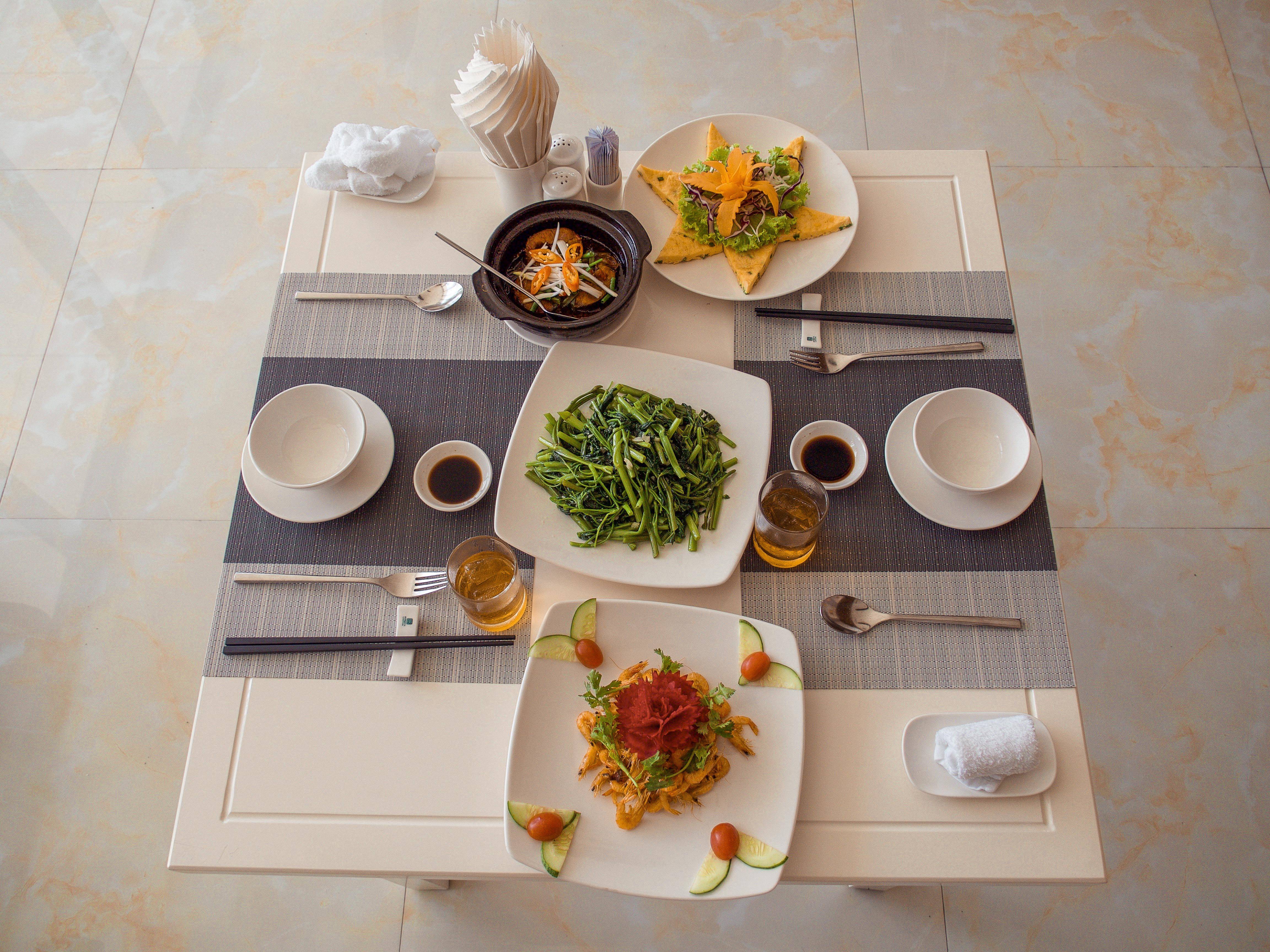 With full bellies, we hopped on our motorbike yet again and made our way back to Cam Ranh just in time to leave to explore Hoi An a bit farther North. Read about our time in Hoi An here. 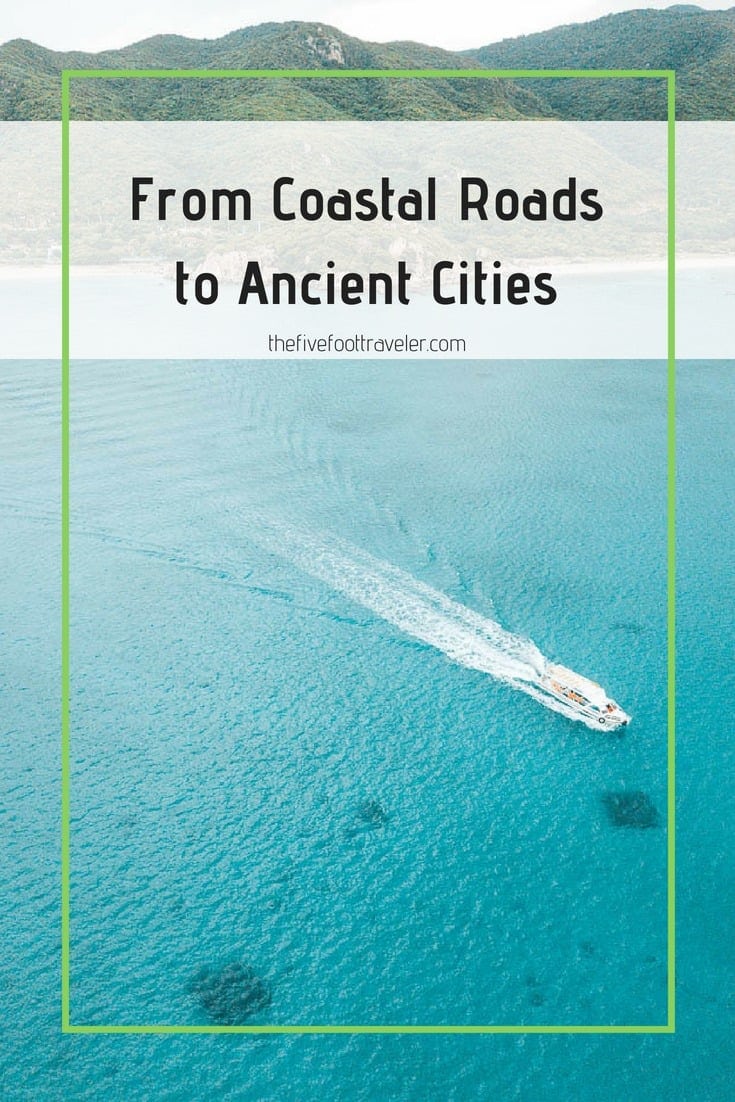 Thanks for the photos Jonny Melon!