After 9.5 sleepless hours on the plane, the sun began rising in an astonishing display of blues, oranges, and yellows, getting brighter and brighter under the wing of our plane. Witnessing such a beautiful moment, while approaching the Promised Land, was moving – leaving my eyes welling with tears during the sun’s ascent and our descent. David and I made it, made it to the City of David. As the sun began to rise higher and higher in the sky, it met us eye-level above the clouds. The beams of sunshine began to pierce through the clouds; they reached far away from the distant sun and shone directly into our window. God’s way of wishing us a beautiful good morning.

Upon arriving in Israel, we grabbed our bags, boarded our bus, and took off for Neot Kedumim, the Biblical Landscape Reserve located between Tel Aviv and Jerusalem. We stepped off the bus at Neot Kedumim and realized just how hot it was in Israel. The landscape was beautiful, and we learned about the history of Israel and it’s connection to the Bible. After wandering around the trails for a while, we were taken to plant our own trees. David and I each decided to plant two trees, so that our four soon-to-be trees could represent our immediate family. In planting a tree, we were solidifying our roots in Israel.

“Just as I found the world full of trees that my grandparents planted for me, I am planting for future generations” (Babylonian Talmud, Ta’anit 23a)

After Neot Kedumim, we headed to the Haas Promenade for a Panoramic View of Jerusalem. It finally felt real as we stared into our destination and saw Temple Mount/the Walls of the Old City in the distance. We stared in awe for a bit, snapped some photos, and played a quick ice breaker with our group. 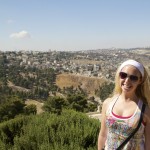 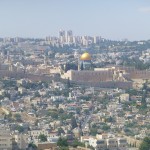 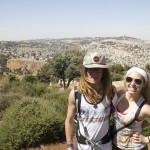 We left for the airport at 5:45am Wednesday morning and were on-the-go nonstop until getting to the hotel Thursday night, making for quite an exhausting first day. Hitting my pillow at 21:30 had never felt better.