Sizing up the Serengeti – Day 3

Watching the sun creep up over the horizon in front of a silhouetted Acacia tree in the Serengeti was yet another “I can't believe I'm actually in Africa” moment. We set out in the pitch black, and our guide from Pristine Trails told us that we were in a hard area to see the sunrise due to the hills. Yet somehow he managed to find us the perfect spot in front of a nicely shaped Acacia tree. We waited and watched as the sky went from black to purple, pink, peach, orange, yellow, and finally blue as the sun finally creeped up over the horizon. 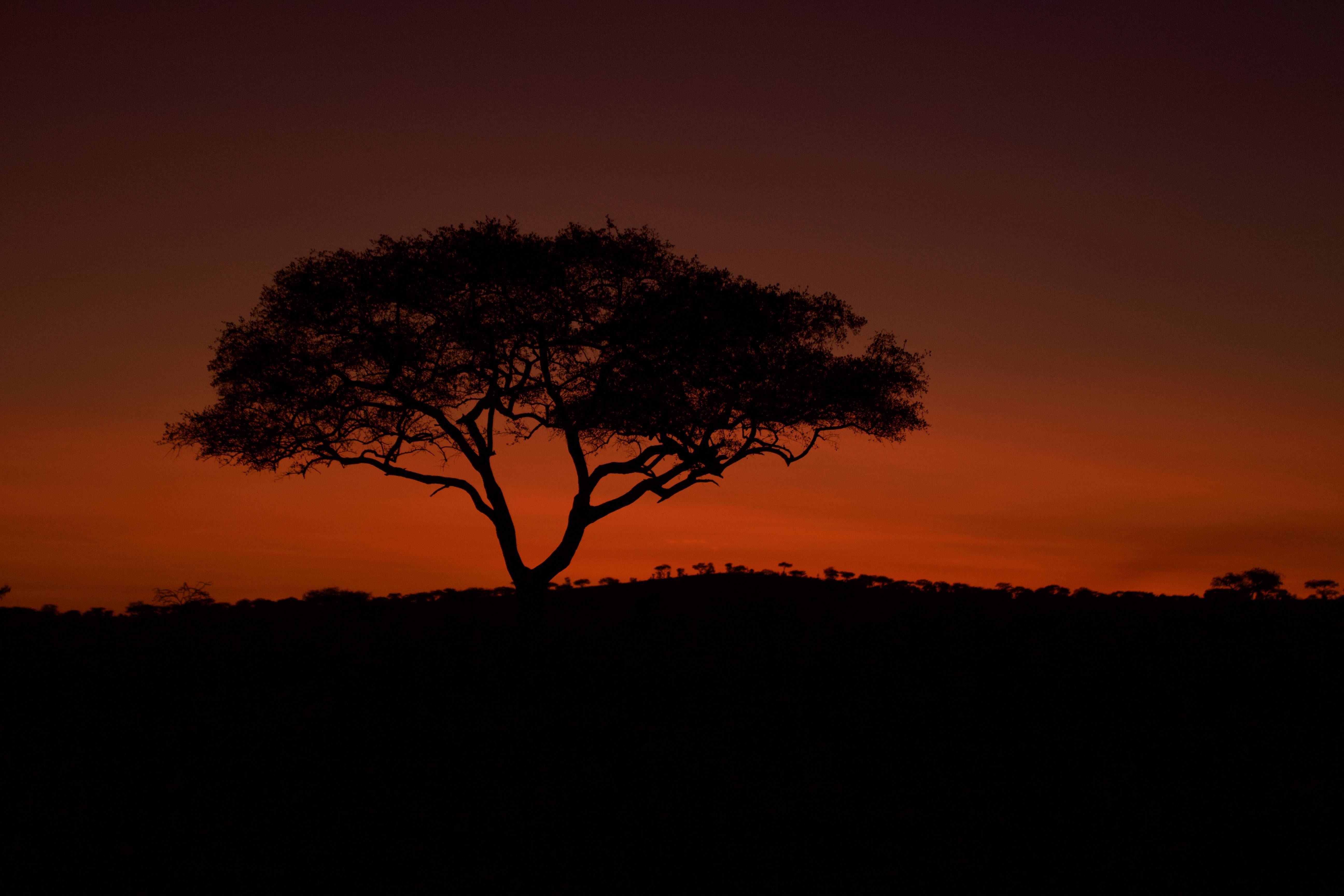 My mom said she wished some giraffes would come by because it would be amazing to see them silhouetted along with the tree, in front of the sun. Within minutes, a pair of giraffes came loping over in front of the sun! Sadly, they were a bit too far away for the desired effect, but it was still a beautiful sight!

Driving back to camp for breakfast, we caught glimpses of the animals beginning their days with some grazing: giraffes and their young, gazelles, impalas, jackals… 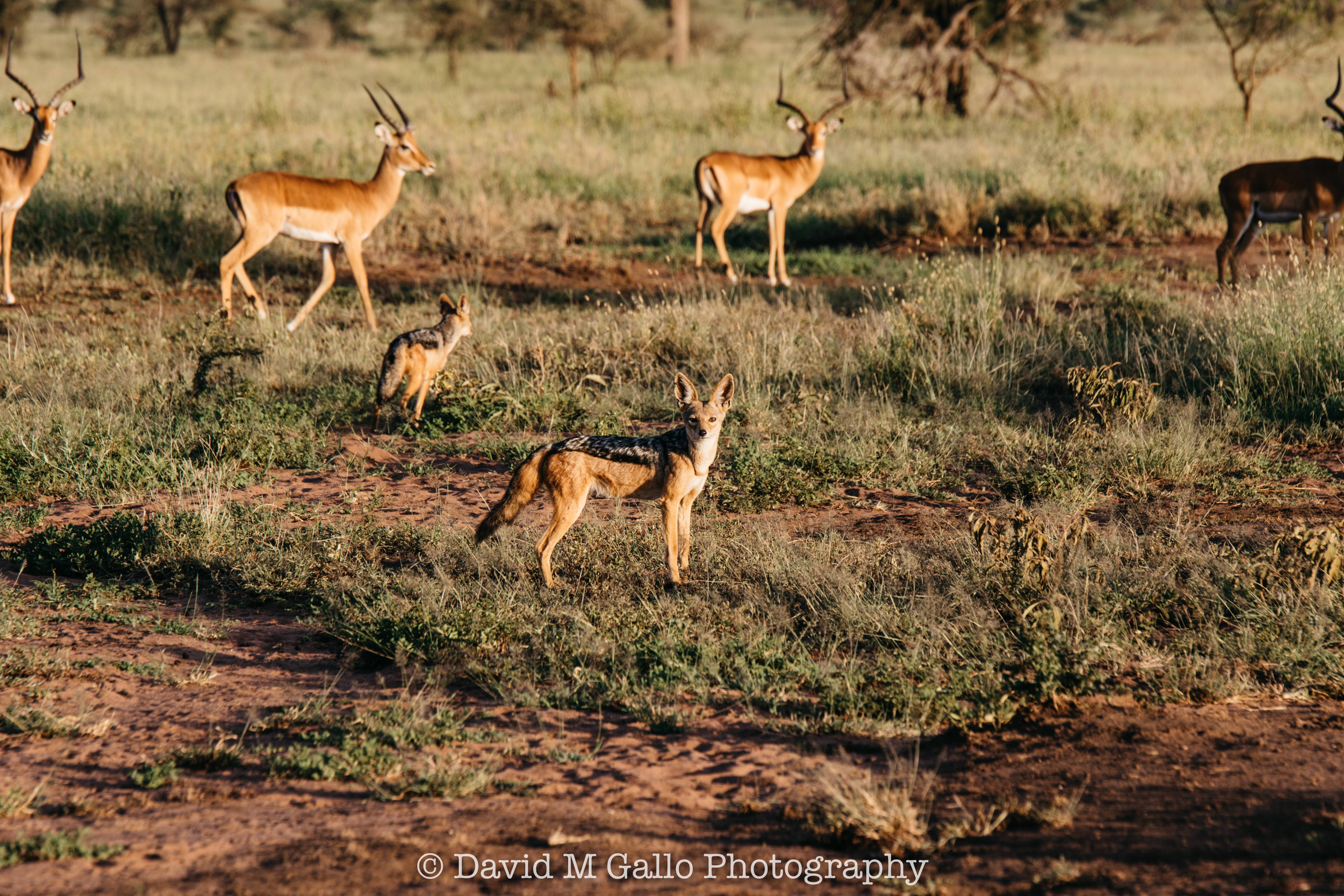 Another yummy breakfast, and we were on our way, and wondering which game sightings were in store for us. It was a good feeling to know that we had two nights at the same place, so we didn't have to pack up. Although we had already seen most of the animals in the Serengeti, it was still quite an experience driving through the African plains with the windows open, the roof up, passing herds of animals reserved for zoos back home. 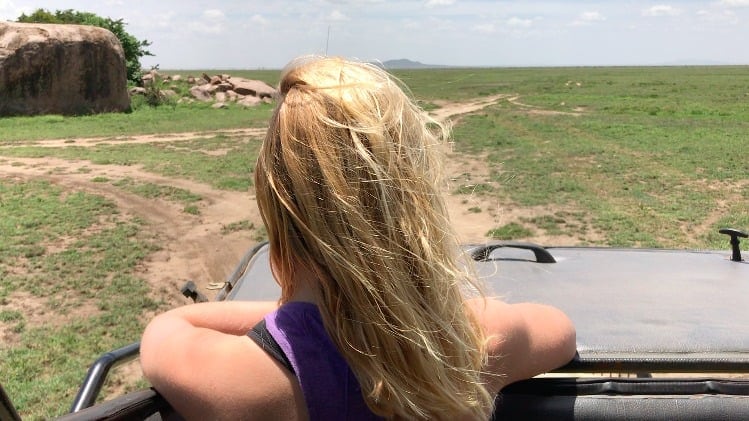 More elephants walked by right next to and in front of our truck. 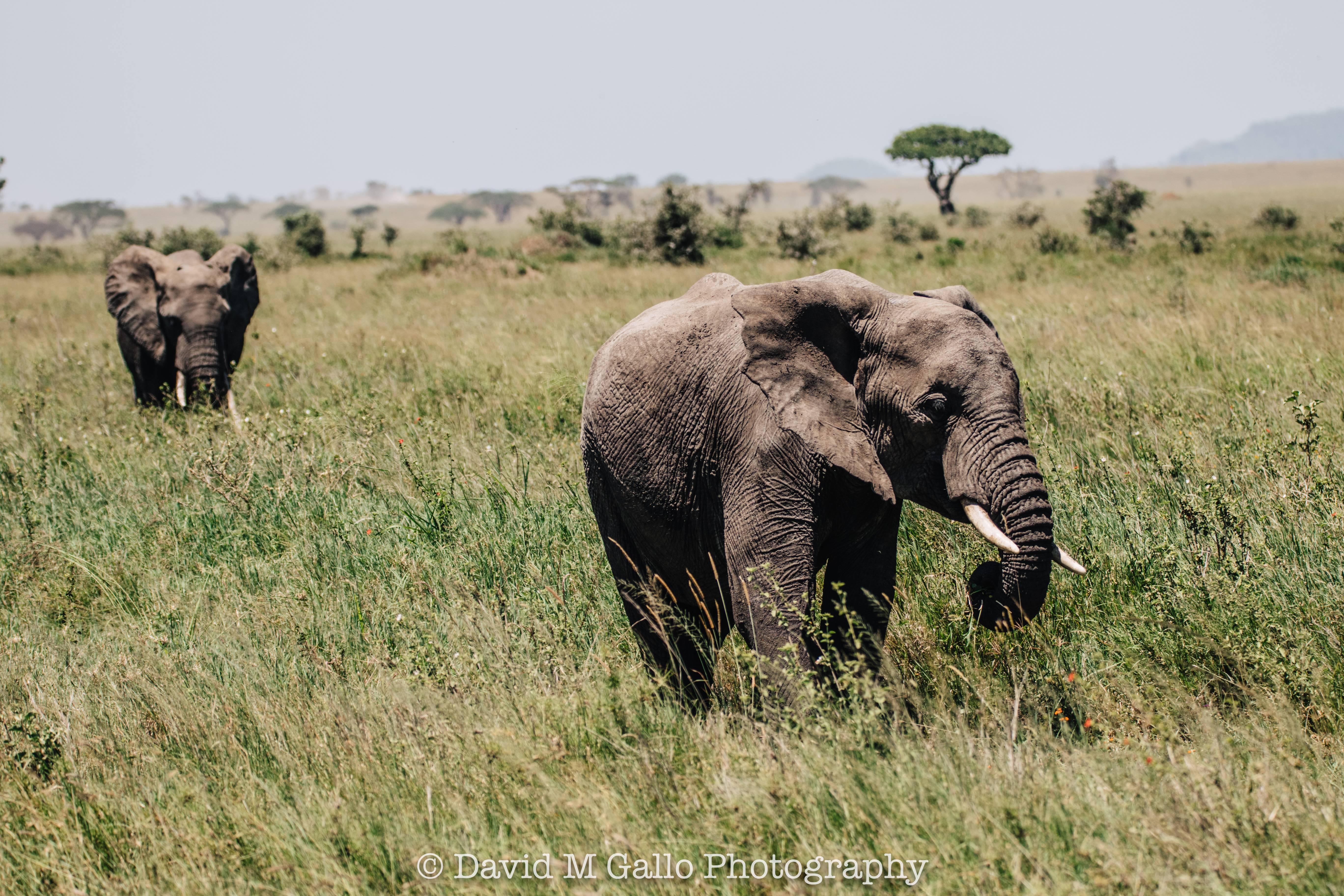 We spent some time watching a group of elephants, then further up the road we saw another herd, all gathered in a circle under a tree. 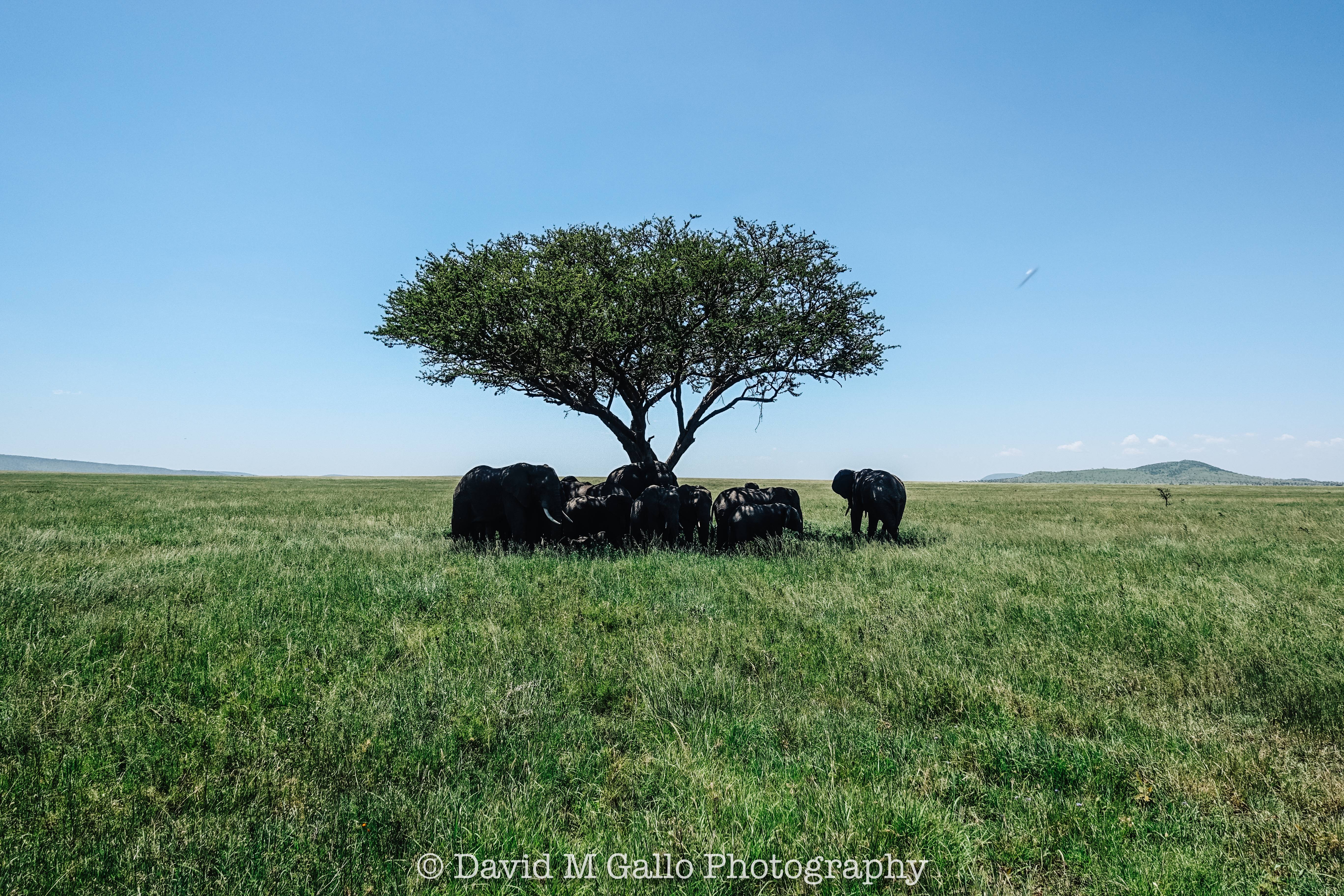 We were the only ones around, and Peter explained that they were protecting the napping babies! 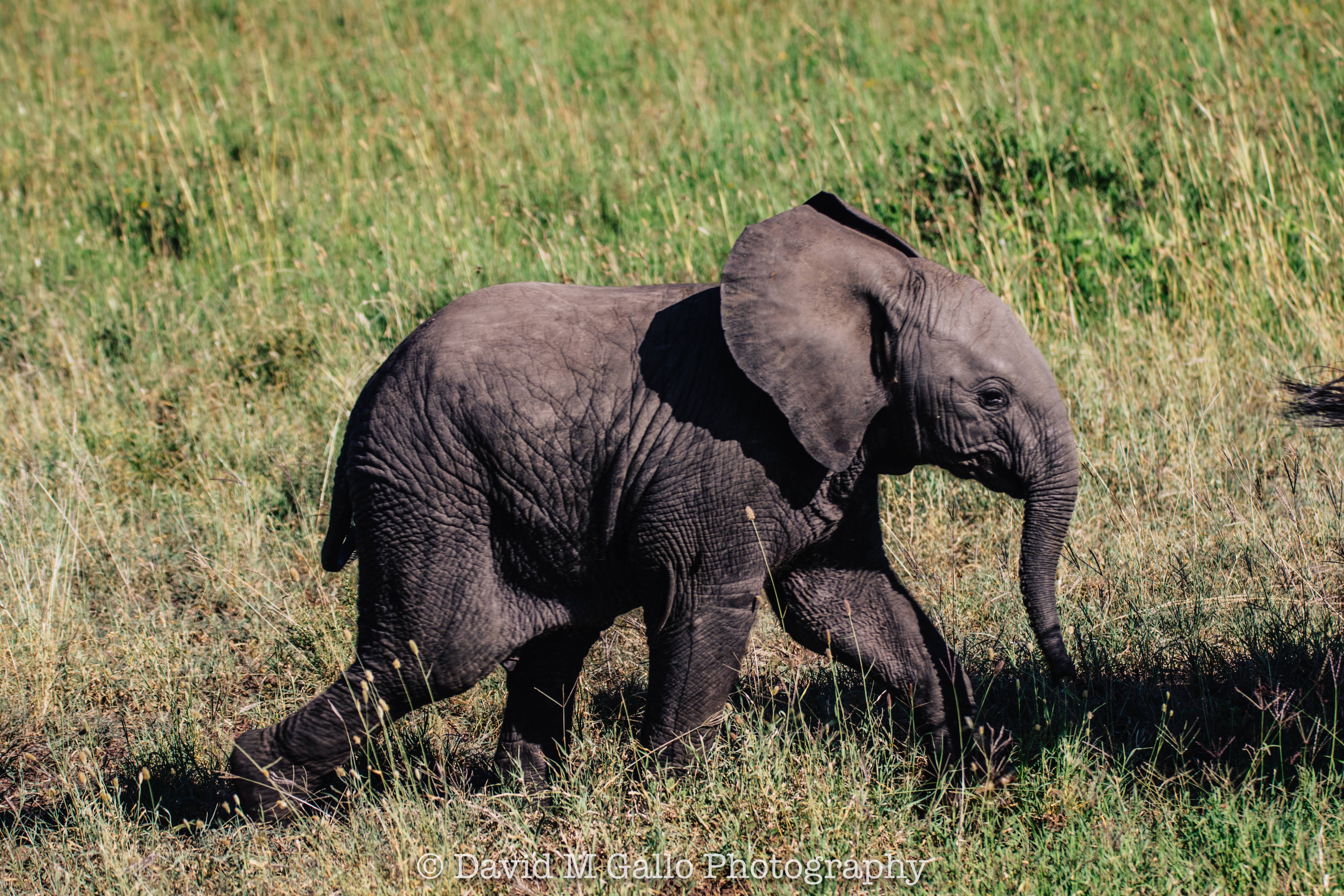 At one point, a single male elephant from a different herd tried to get closer, but was stopped by a very large older male. They locked tusks then the intruder backed off. 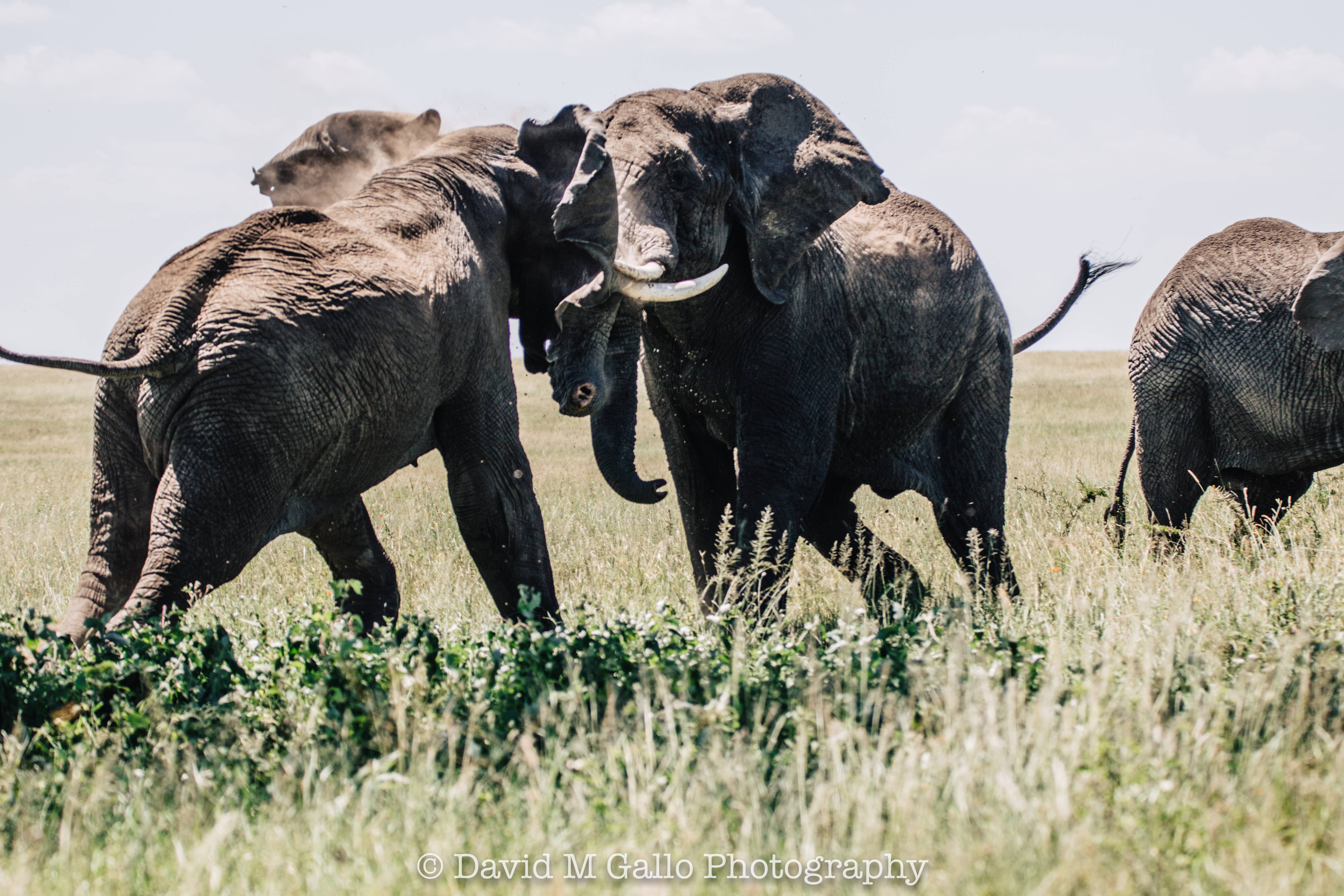 Finally, the little ones awakened, and the herd parted to let them up. And off they went, likely to look for the closest watering hole. 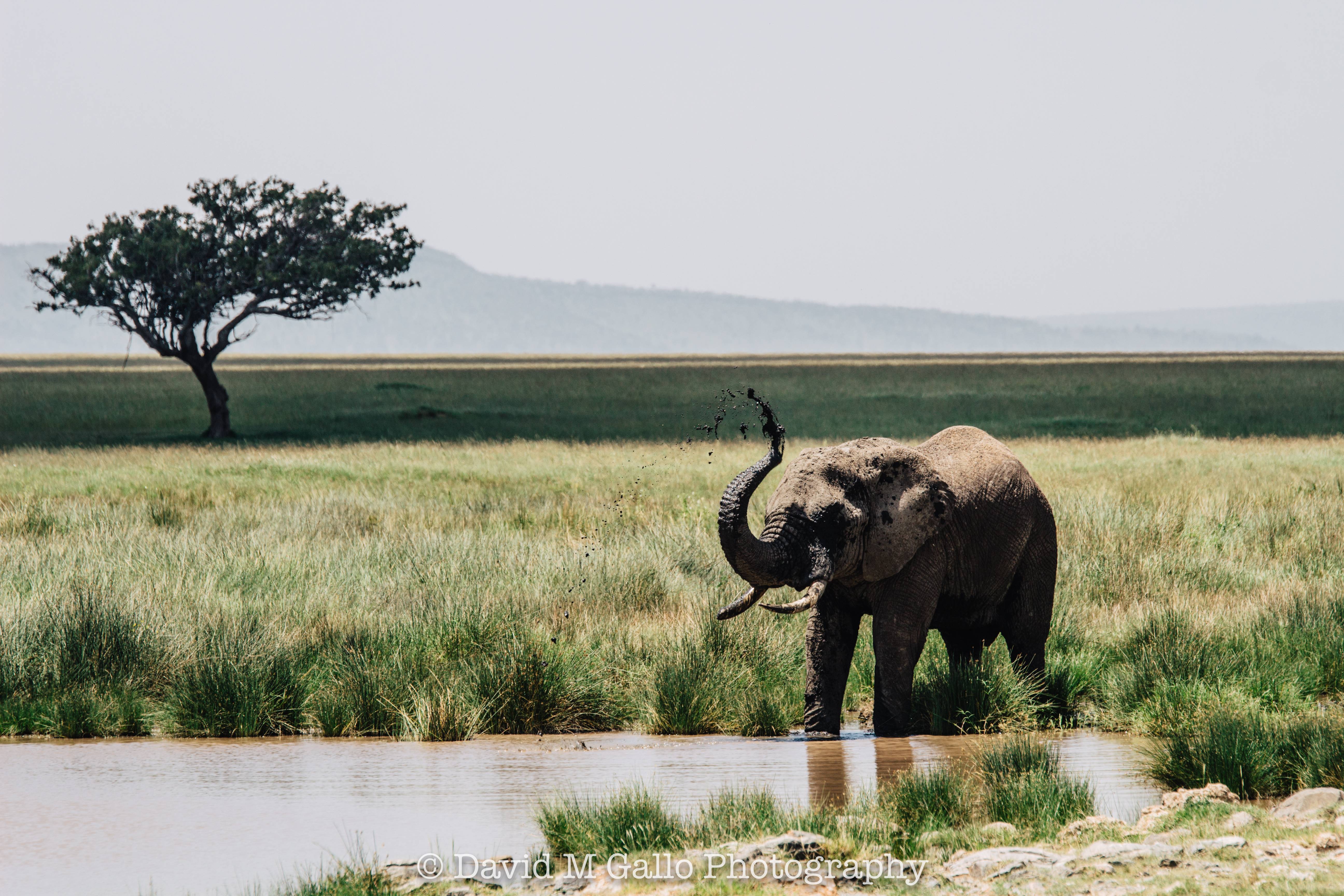 Elephants are such majestic creatures, and everyone in our group thoroughly enjoyed the opportunity to watch the way the herd interacted with each other. We reluctantly drove away knowing we had just witnessed something special. 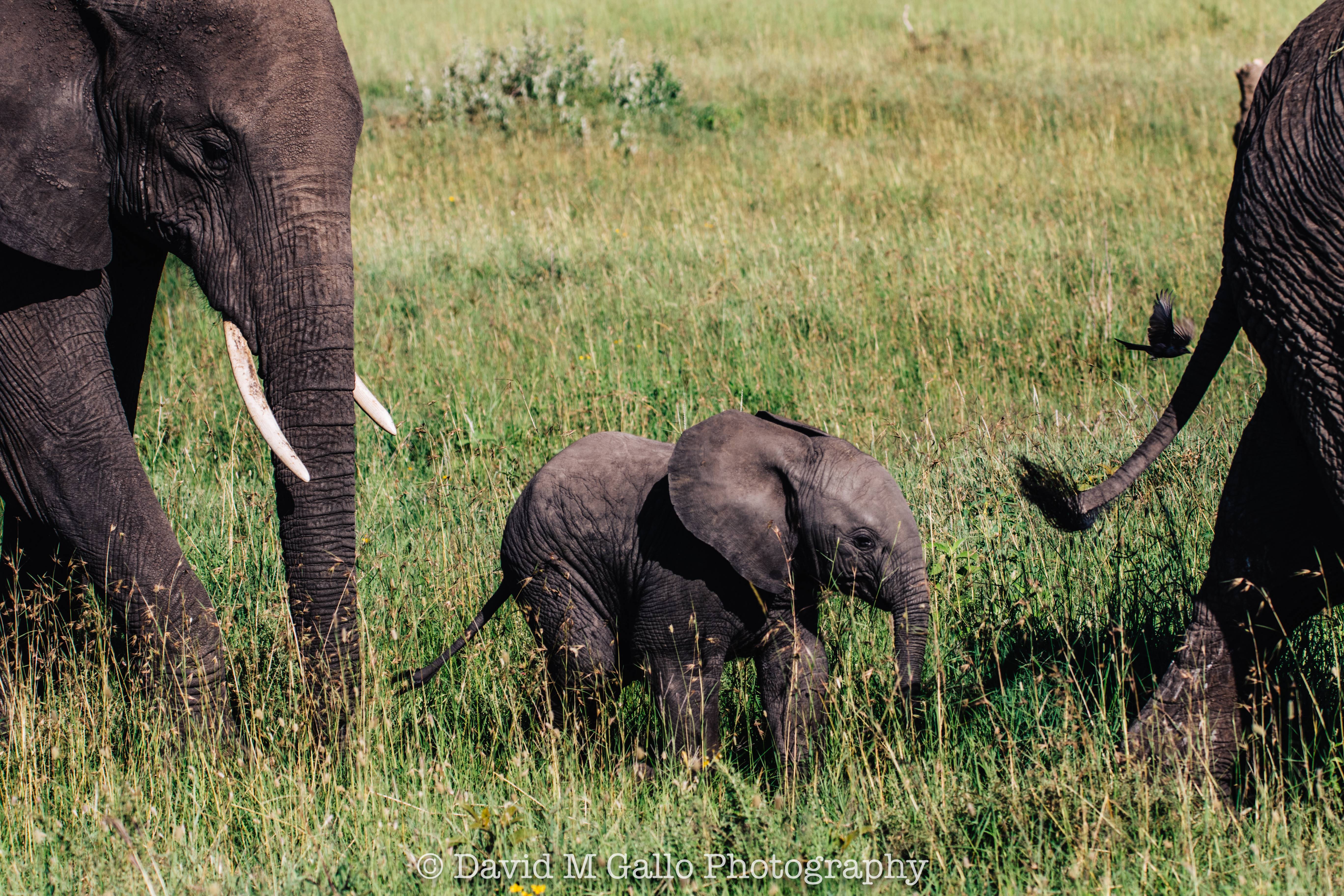 We then saw some more lions “lyin’” around, and a very old male lion resting in the shade of some bushes. Doesn't seem like lions do very much other than sleeping! 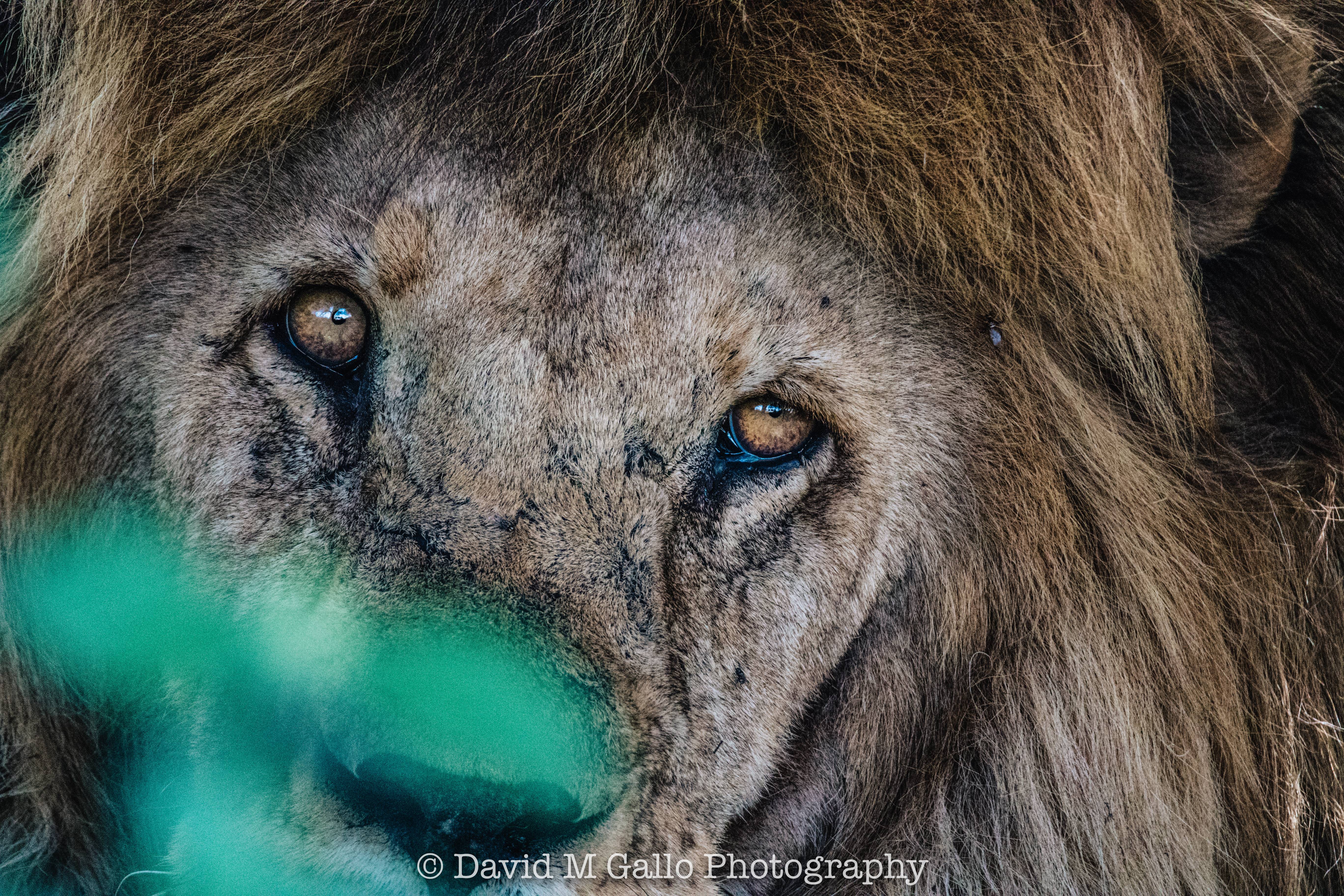 We could hardly contain our excitement when Peter announced that he spotted a leopard in a tree. As we got closer, we were again taken with its beauty as it sprawled out on a branch, legs and tail dangling down. 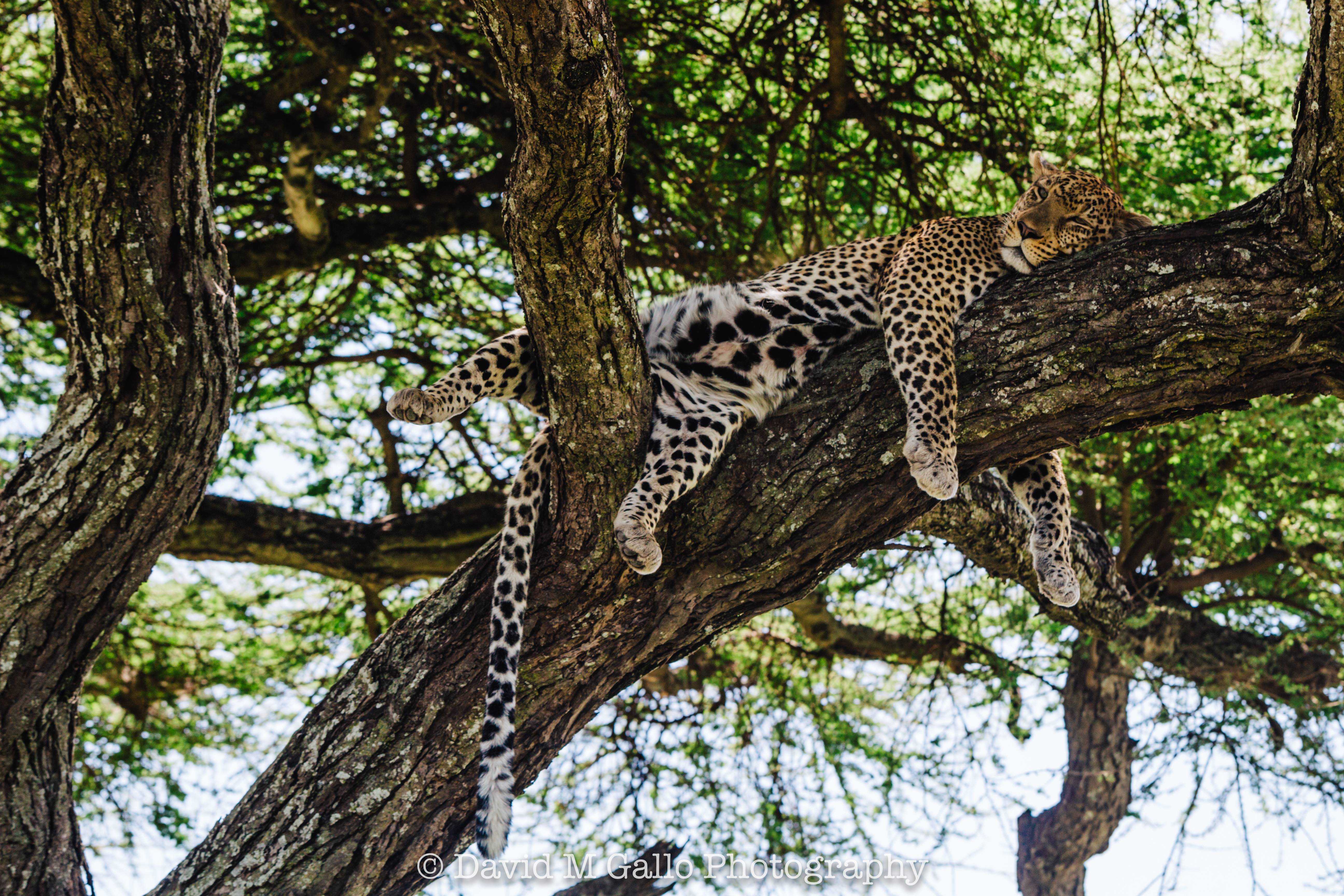 On the drive back at the end of the day, we pulled over when Peter saw two lions on the side, one male and one female. They were just laying on the ground (shocking, right?!) then at one point the male got a look on his face, and we knew what was about to happen! 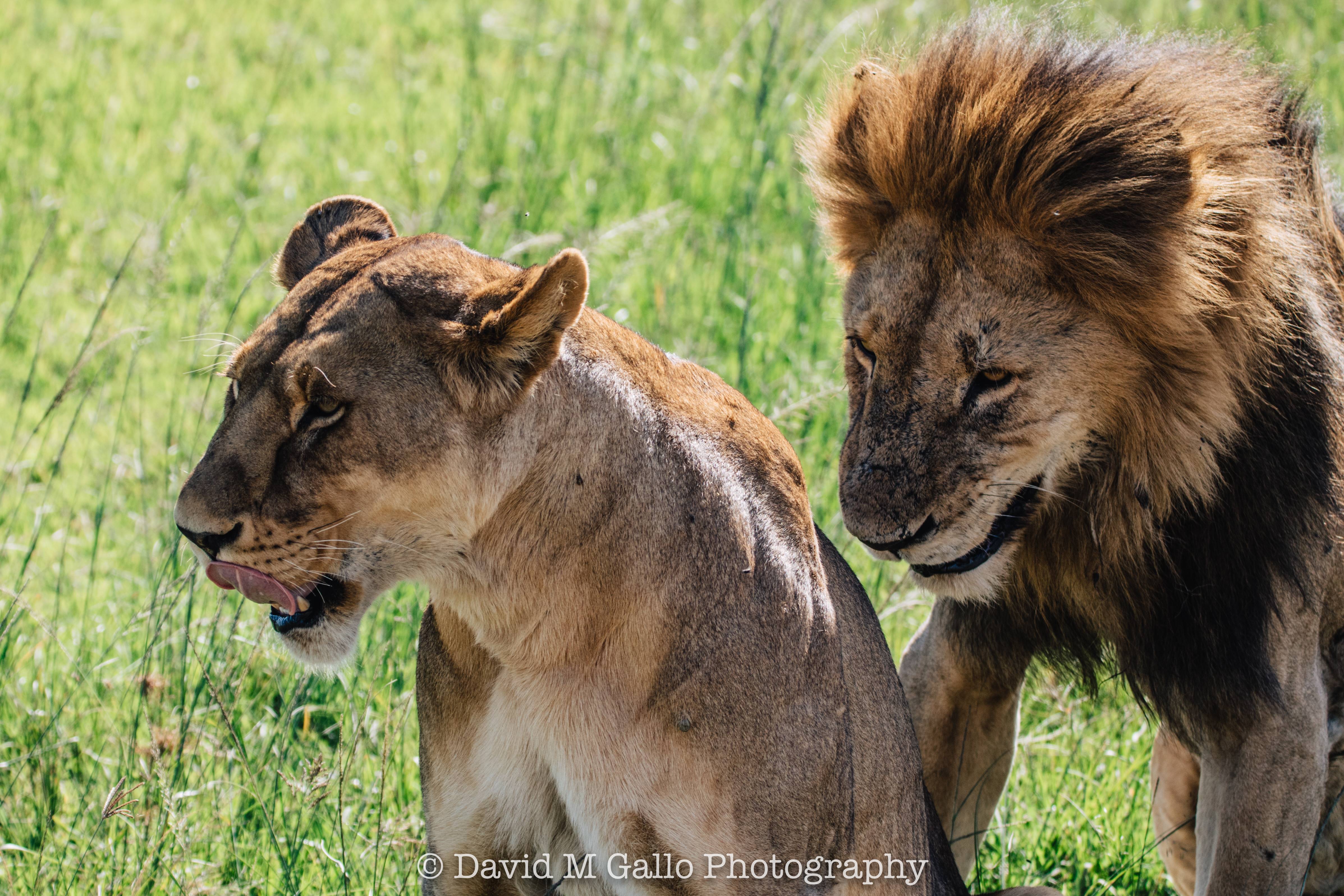 It was so fast, that it was over before I could even get into position to take a photo of them mating! The “King of the Jungle” is most definitely not the “King of the Bedroom!” Naturally, they passed out again when they were done.

What a way to end our final day in the Serengeti with Pristine Trails! 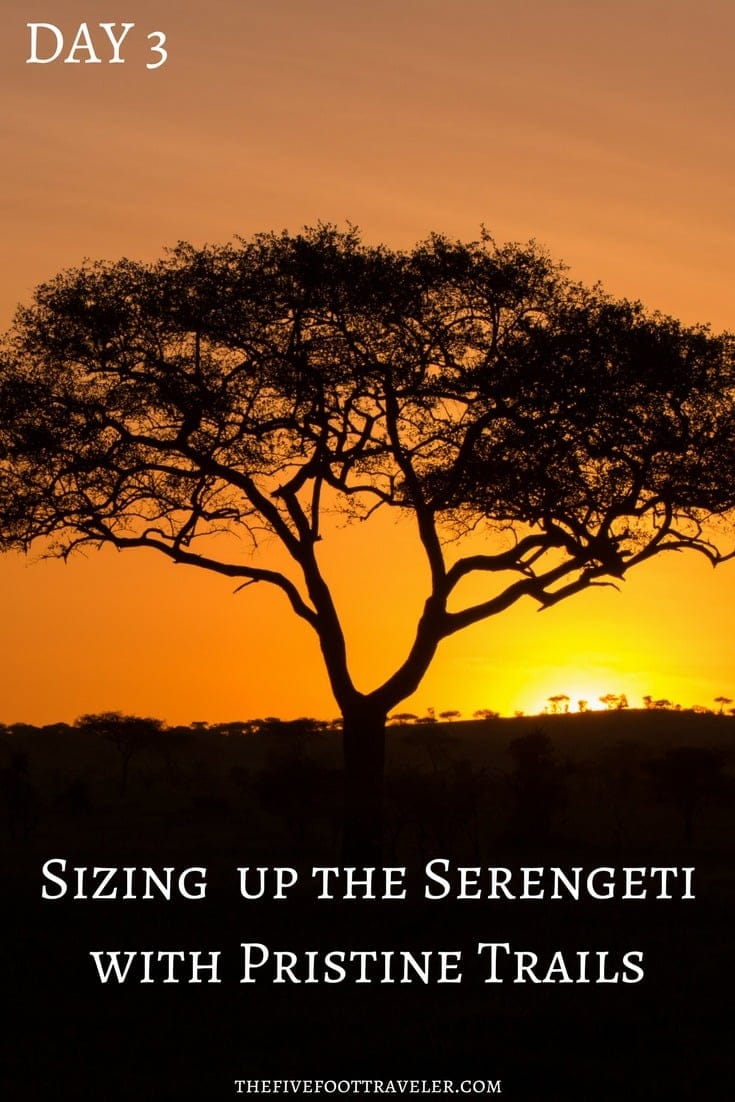