Sarajevo is a city full of rich history, spanning hundreds of years. It has been under numerous rulers and political entities prior to becoming the independent country of Bosnia and Herzegovina. We decided to learn a bit more about the country by taking a Sarajevo Walking Tour with Dino of Insider City Tours and Excursions.

A Brief History of Sarajevo: 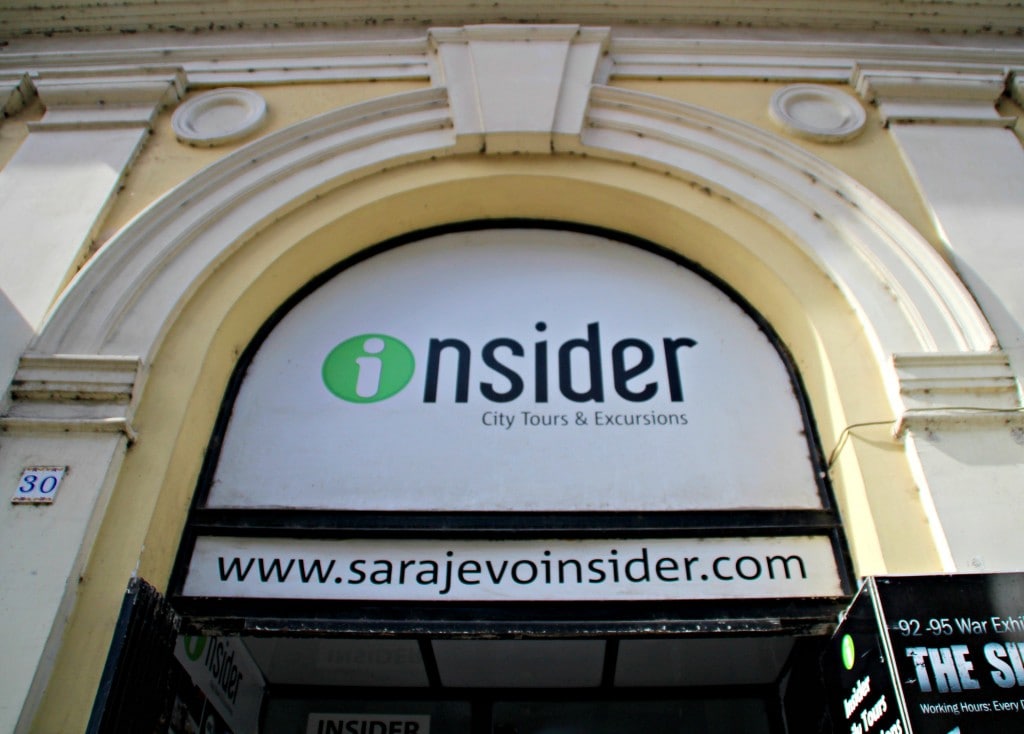 What is Sarajevo known for on a Global level?

How did the assassination of the Archduke Franz Ferdinand lead to the beginnings of WWI?

At the time, there was a movement of Young Bosnia that called for the Black Hand; they were fighting for the unification of the South Slavic people (which was ultimately what became of Yugoslavia). The problem was that Archduke Franz Ferdinand was the heir to the Austro-Hungarian throne — if he took the throne, how could Bosnia and Herzegovina ever be free? So, seven people of the Black Hand arrived in Bosnia with the intention of killing Franz Ferdinand. Their first attempt at assassination failed, and warned Ferdinand of the impending threat. Due to this knowledge, Ferdinand changed his driving route en route to City Hall, but the driver didn’t understand, took a turn down the original route, and it was there that Ferdinand and his wife Isabella were assassinated. The assassination point is where we started our tour with Insider.

Austro-Hungary then declared war on Serbia after accusing them of the assassination due to their connection with the Black Hand. Some claim this was the start of WWI. In fact, some even consider the assassinator a hero because he ended the Austro-Hungarian rule and enabled the unification of the South Slavic regions. None of the Big 4 Empires existed after WWI – neither the Russians, nor the Ottomans, or the Germans, and not even the Austro-Hungarians.

After learning about Ferdinand’s assassination and the subsequent war, the Sarajevo Walking Tour took us by the Emperor’s Mosque (the first mosque of the city which was built in 1457 by the Ottomans), and stopped outside of City Hall. Sarajevo’s City Hall was built in 1896, in Moorish style, during the Austro-Hungarian period. This building was the last building that Franz Ferdinand entered alive. It was the seat of all authorities until WWII when it was completely shelled; 70% of all books inside were burned, so it was a great loss for the city. When rebuilding a destroyed building, it has to be rebuilt in the exact same shape and style, and that was the case with City Hall.

From the City Hall, we walked a few blocks to view the White Fortress and Yellow Fortress, built in 1729 and 1739, perched on the hill above us. They were originally built as military barracks for the Austro-Hungarian Army. Prior to the building of the fortresses, Sarajevo was completely burned to the ground in 1697; at the time, Sarajevo had no means of protection because the Ottomans never thought that Sarajevo would be attacked.

We continued our Sarajevo Walking Tour and entered the Old Town by walking down Coppersmith Street, where copper crafts are handmade using the same techniques passed down through the generations, and stopped at Morica Han, an old caravanserai in the center of the Ottoman section of the Old City. It was here that merchants and traders used to stay in the city. At Morica Han, up to 160 people were able to stay for 3 days and 3 nights for free as a means of Muslim hospitality; this constant coming and going of merchants and traders helped make Sarajevo multicultural. 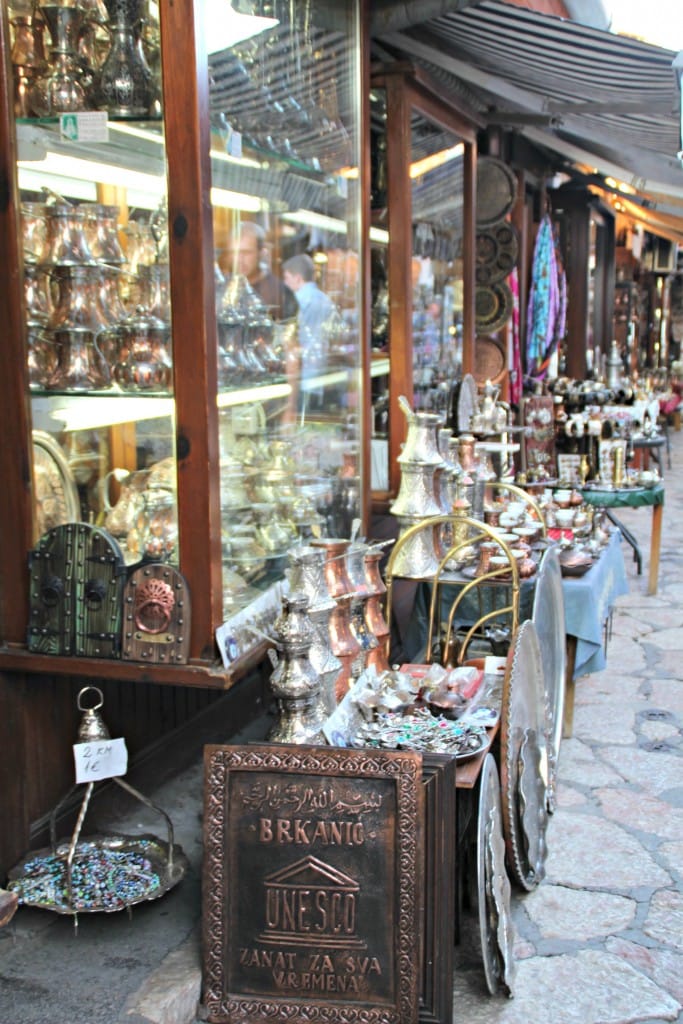 The Gazi Husrev-beg Mosque is Sarajevo’s main mosque that was built in 1531 when the Ottoman Empire was at its peak; in a matter of 20 years, the city of Sarajevo grew fives times in size. The mosque is built in classic Istanbul style with three entrances and one minaret. What’s special about the Gazi mosque is that the call to prayer is not a recording, but it is a real man. 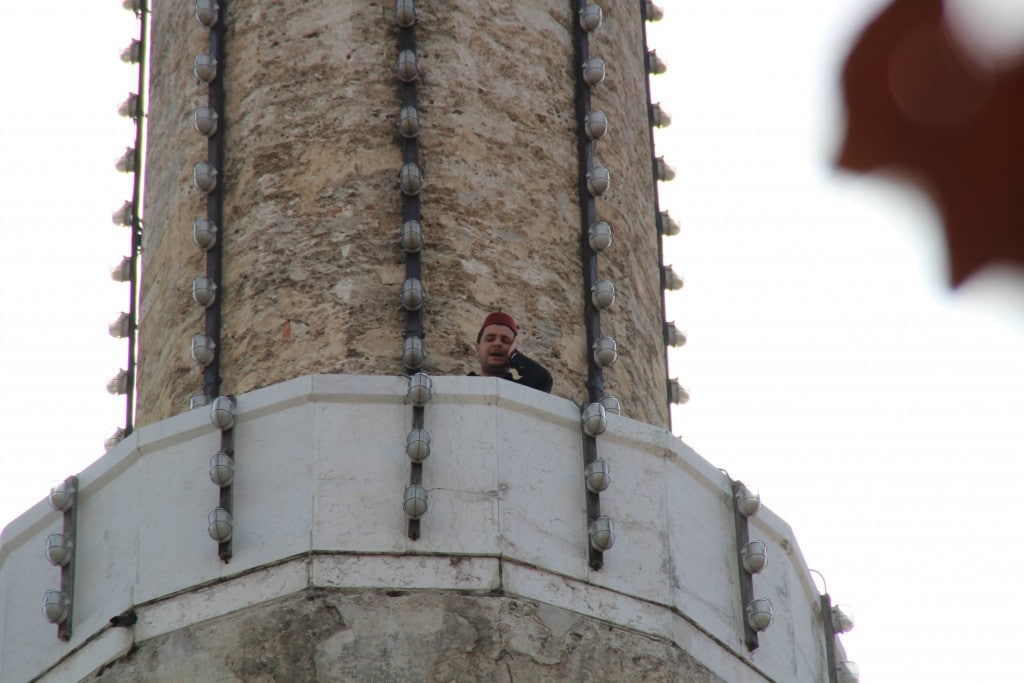 Before entering the Gazi mosque, each person must purify themselves by washing their hands, face, mouth, nose, ears, behind the ears, hands again, and feet. 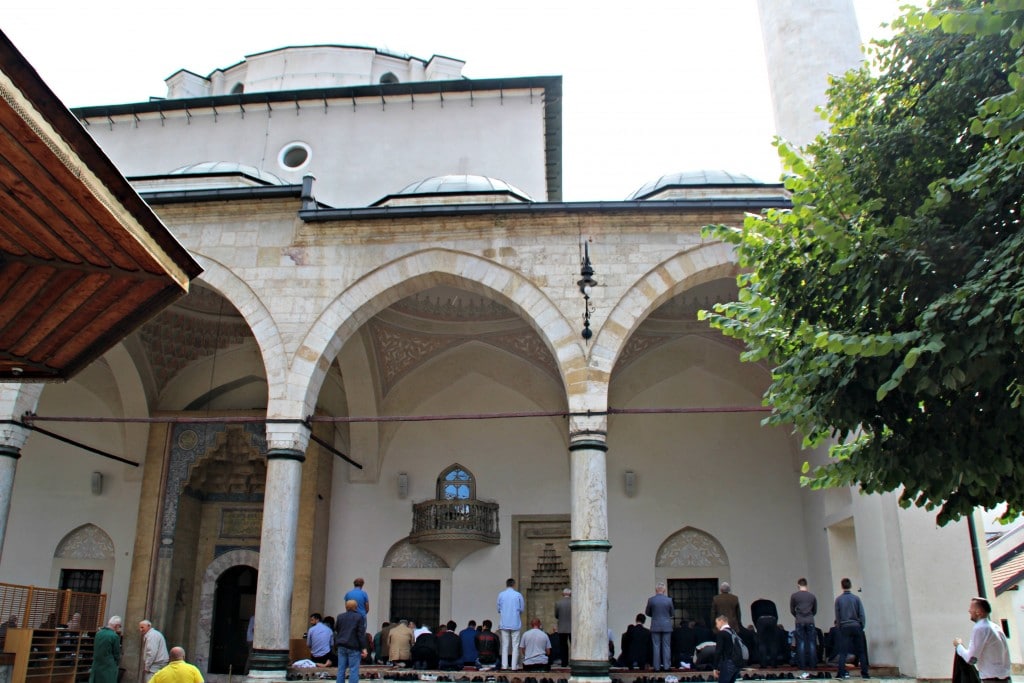 Another unique aspect of the Gazi mosque is the Clock Tower that stands beside it. Many Muslims go by the lunar calendar, and so the clock tower will go by that clock. 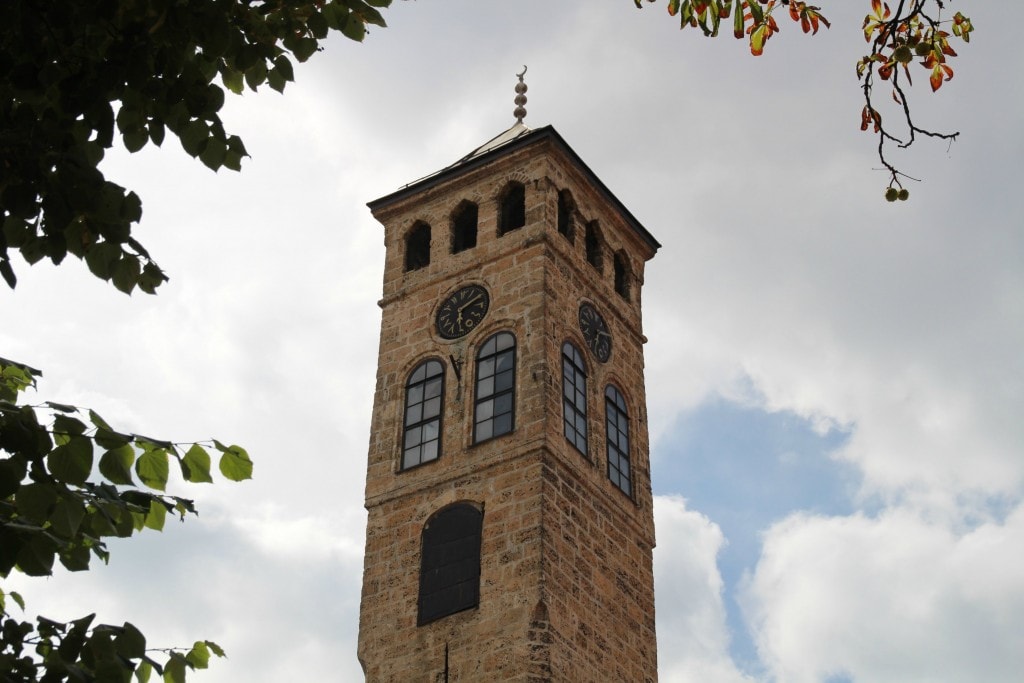 We continued on and stopped at the original Madrasa. It is the only religious school that could be used under communist rule. In fact, this Madrasa hasn’t missed a single generation of students since it’s opening and has been in continuous use for the last 470 years. When someone finished madrasa school, he could become an Imam, an engineer, or essentially anything he wanted. 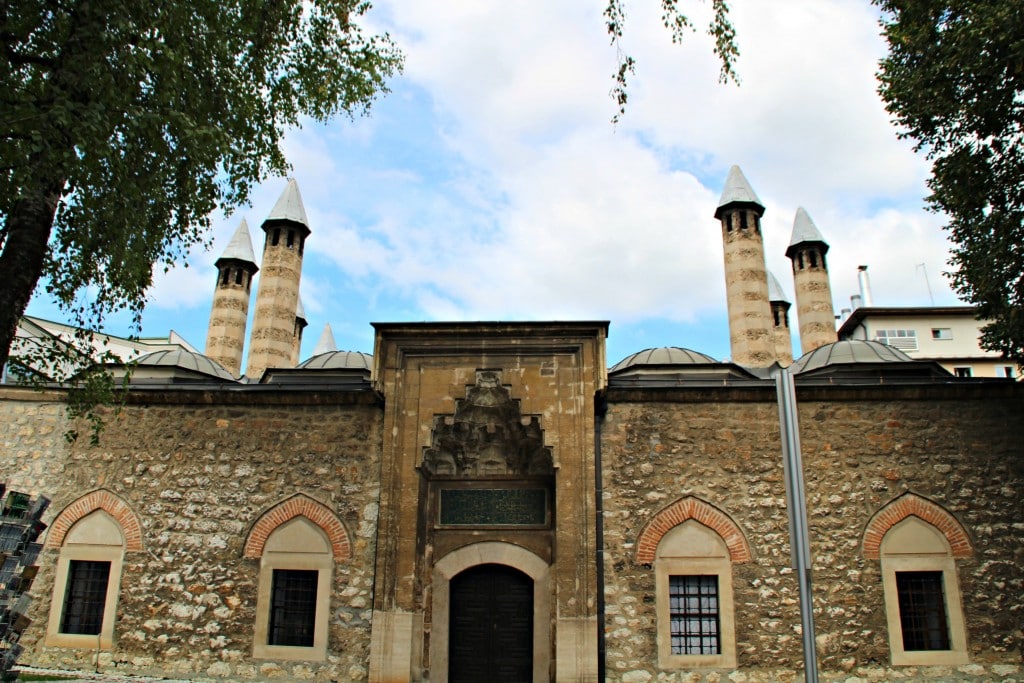 Our Sarajevo Walking Tour then passed by the longest bazaar west of Istanbul that was built in the 1540s before hitting the point where the East and the West collide in a meeting of cultures. Buildings from the Ottoman Empire are on the East side, while buildings from the Austro-Hungarian Empire are on the West side; the Austro-Hungarians expanded west of the pre-existing Ottoman Old Town, however, they let the Ottoman area remain in tact. 5 FT Fact: The Ottoman Empire was the only Empire that opened up to Sephardic Jews after their expulsion from Spain. Sarajevo had a big population of Jews prior to WWII, 28%, but today they are a minority — only 700 members of the original 400,000 Jews are still present today.

We finished off our Sarajevo Walking Tour at two places of worship: the Catholic Cathedral and the Congregational Church of the Holy Mother of God, built in 1868. 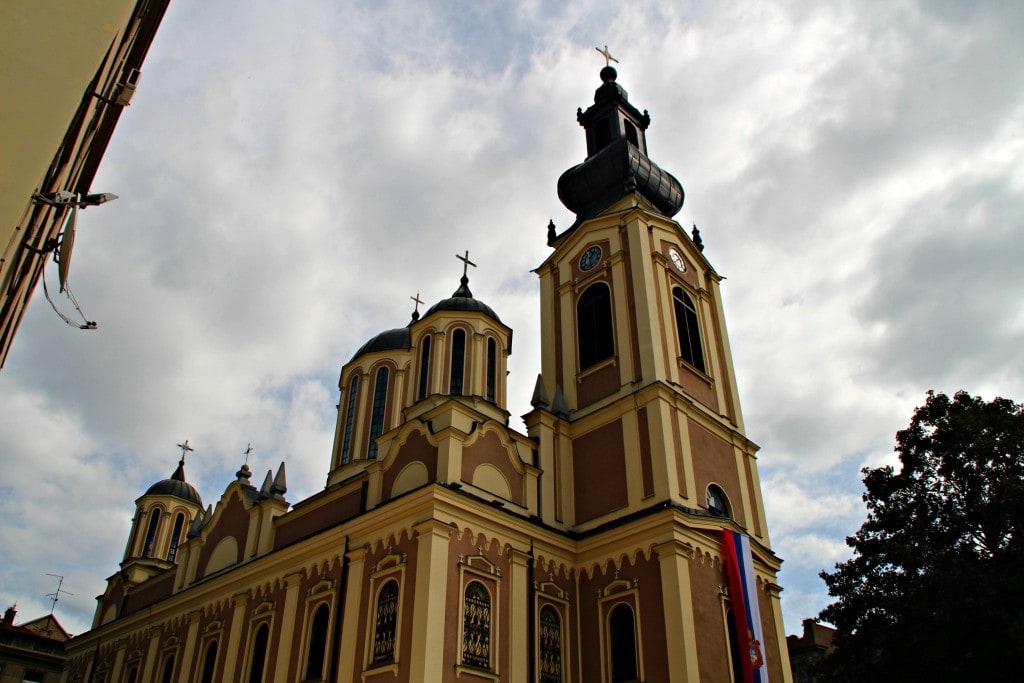 The Catholic Cathedral was built in 1889 and was the seat of the Arch Bishop of Bosnia and Herzegovina. After the Sarajevo Siege, Pope John Paul II visited and helped the country, which is why there is a bronze statue of him outside of the cathedral. 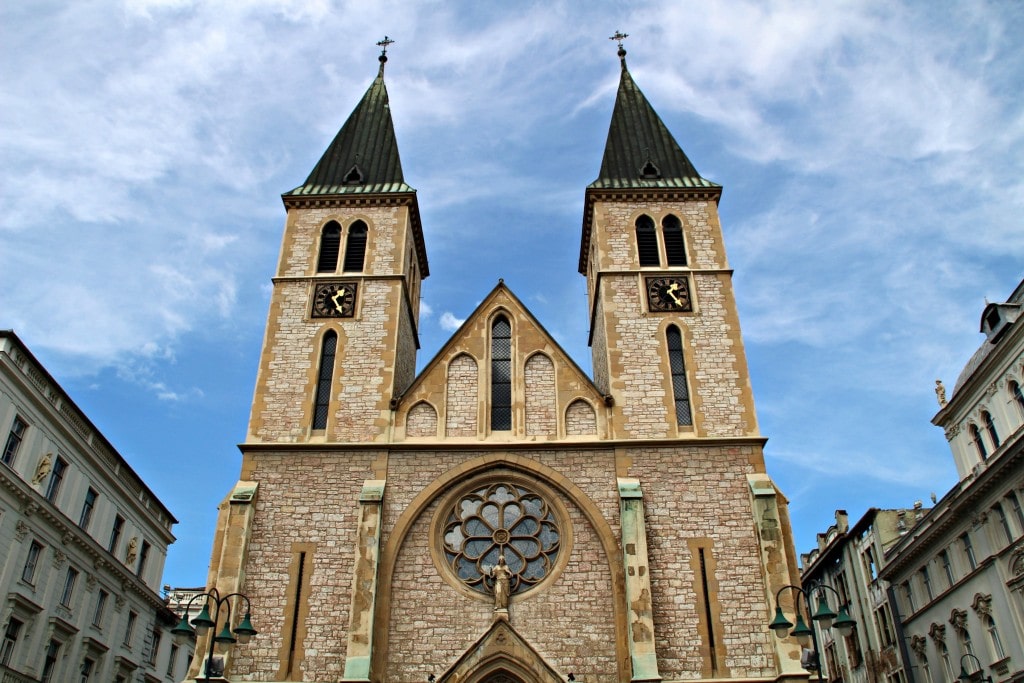 Despite the fact that 70% of Sarajevo is Muslim, it is a city of religious tolerance with mosques, catholic cathedrals, orthodox churches, and Jewish synagogues.

I couldn’t recommend highly enough going on the Sarajevo Walking Tour with Insider if you have a few hours to spare in this beautiful city!

**Special thanks to Sarajevo Insider for kindly offering me a complimentary tour. As always, all opinions are my own.