Sizing up the Serengeti – Day 2

Not wanting to miss a thing in the Serengeti, I was up before the sun and headed outside just in case there was a nice sunrise. As the sky lightened, I was treated with the sight of a hot air balloon lazily floating in the colorful sky above the waking African bush. 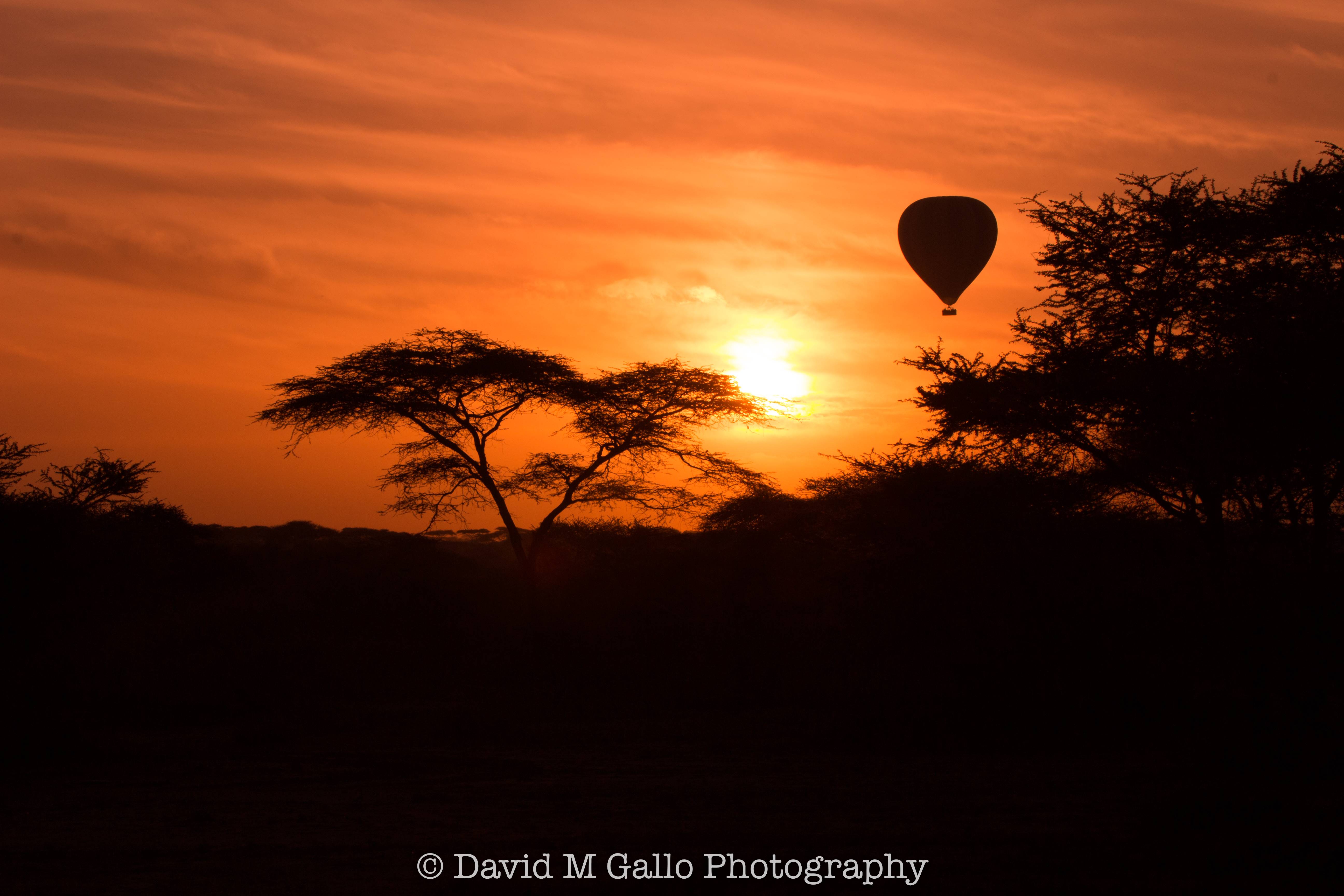 We ate breakfast, loaded up the truck, and departed for our full day game drive farther into the Serengeti. Once again, we were driving with the wildebeests and were in awe of the vastness of the open plains as they were traveling in a giant line that stretched across the horizon as far as the eye could see.

We quickly came upon 3 adolescent male lions relaxing in the sun! Peter, our guide from Pristine Trails, told us the best way to determine the approximate age of a male lion is by the length and color of his mane: short and light means he's young while longer and darker indicates an older one.

Continuing further, we lucked out when we found 5 cheetahs!

The male kept his distance from the female and her 3 adolescent cubs finishing up their lunch. While it was unfortunate that we missed the kill, it was interesting watching them and hearing their high pitched squeaks!

At one point the 3 young ones found some shelter from the sun behind the safari truck next to ours, and one of them even stretched up its front legs on the spare tire of the safari vehicle.

Hyenas, vultures, giraffes, elephants, impalas, ostriches, and warthogs were all seen as we headed north into the central part of the Serengeti. 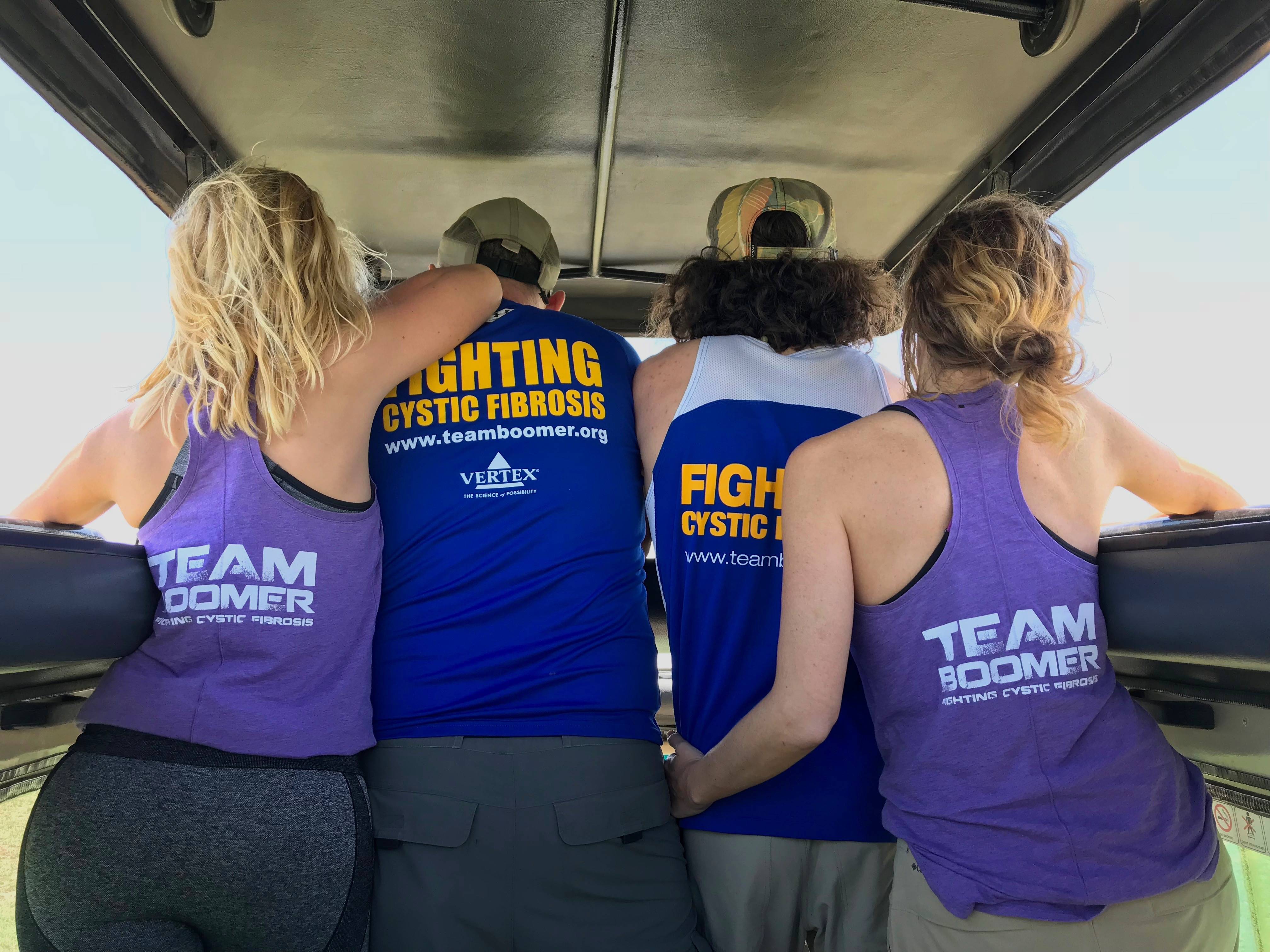 On the way to our home for the next two nights, we saw 4 safari trucks stopped along the side of the road. Apparently, there was a leopard lying down in the grass under a bush. We waited and waited, and eventually the other trucks gave up and continued on, leaving us the last ones there. After a bit, we saw some movement and finally spotted the leopard (see what I did there?)! This graceful feline was finally visible, and it was a beauty! We all thanked Peter for his patience and continued to camp.

One last stop before arriving “home” for the night — a river with about 20 hippos! Honestly, we could smell them before we even saw them! They can sunburn easily, which is why they're mostly seen in water with only their eyeballs, ears, and nostrils showing. Overnight is when they leave the water to graze, and sometimes they travel as far as 7km in one direction just for food. These guys are massive, and also happen to be the animal that kills the most humans in Africa.

Our group arrived at our destination to a warm welcome from the staff at Serengeti Acacia Camps, and we were reminded that we were in the bush and not to leave our tents after dark unless we had an escort from their staff (each tent was equipped with walkie-talkies with which to contact them). We were shown to our assigned glamping tents and had a little bit of time to unpack and shower before dinner. These tents were fabulous and equipped with electricity, extremely comfortable beds with mosquito nets, desk, settee, and a large bathroom with shower, sink, flush toilet, and a place to hang some clothes, partitioned off with canvas.

After yet another delicious and filling dinner, we were too tired to do anything other than go back to our tents and climb into bed. We opted to set the alarms early in order to be in the truck for sunrise with Pristine Trails. 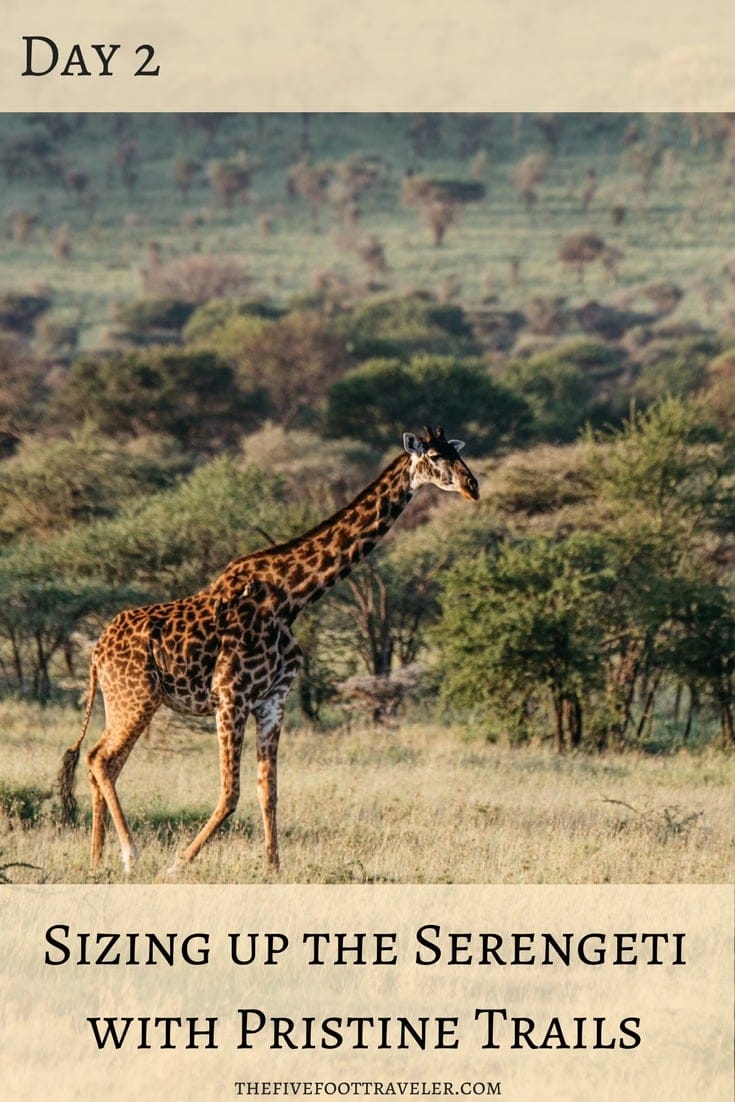