David and I were up early to get ready to cross the border into Jordan. We were given adorable to-go breakfasts and our driver was right on time at 7am. We drove to Israel’s southernmost border with Jordan and waited to cross. While we were waiting we chatted with some Israelis inquiring about birthright and at 8am we were let in the gates. 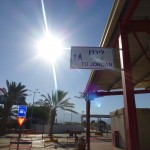 The passport guy took one look at my passport and screamed “that smile!” He cracked up and showed the other person in the room with him who started laughing. He told me it was a great photo and let us through immediately. There were many different security checkpoints like at an airport. In one of the lines we were talking to the people in front of us who said they’re from NYC and I asked where. One of them said she lived in Chelsea and I mentioned that I used to do trapeze over there. To make a long story short, I knew their daughter and we knew some mutual friends involved with flying trapeze. It really is a small world. After a bit of time we finally crossed the border into Jordan! 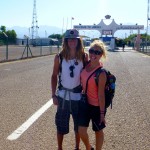 We met up with our guide, Mohammed, and bussed for 2.5 hours to Petra. I was exhausted and it was really tough to stay awake during the drive. We pit stopped at a great lookout point and were first exposed to the Arabian feel of Jordan from the clothes to the jewelry to the tchotchkes. 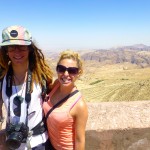 The journey to Petra begins in the Bab as-Siq, a gravel road running alongside Wadi Musa. There are some major monuments on this path, as it is all part of the necropolis, with the two most well-known being the The Obelisk Tomb and Bab as-Siq Triclinium. The Obelisk Tomb (upper half), naturally, contains burial sites. The Bab as-Siq Triclinium (lower half), was used as a dining room where feats were held in honor of the dead. 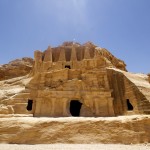 To reach Petra, you have to walk through the Siq, an immense, breathtaking gorge that make you feel so small and insignificant. It's insane to think that tectonic forces caused the dramatic split in these rocks. After the split, the waters of Wadi Musa flowed in, which gradually rounded the sharp rock edges into smooth curves. We hopped from shady spot to shady spot all while trying to avoid the horse poop and all the nasty flies that surrounded it. 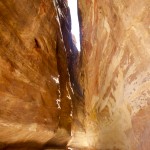 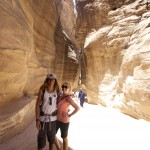 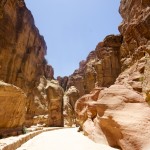 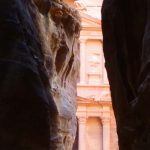 The treasury was built 2000 years ago, and when it was found, it was in perfect shape with the exception of the third pillar. Pretty remarkable. 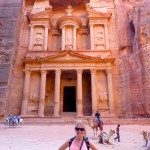 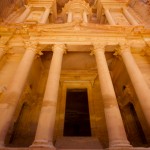 We continued to walk around Petra, viewing family plots and royal plots. It was all unbelievable. We walked down the beautiful Cardo Maximus on our way to the 900-stair Monastery climb. Keep in mind, it was 108 degrees (42.2 C). We were drenched and dehydrated. I was a bit nauseous from lunch and lack of water, so half of the climb up was pretty miserable. Halfway up I bought another liter and a half of water and felt much better. Our poor legs were getting such a workout. 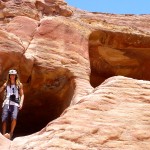 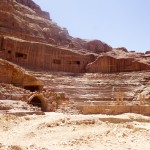 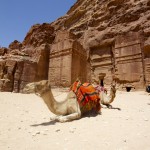 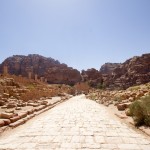 We made it to the Monastery and were in awe – no one was there, it was just us and this ginormous monument. We were able to climb inside the monastery – David climbed up first to pull me up and John, our new American friend, lifted me up. The inside was really cool – both in the sense of “wow this is neat” and “wow a break from the sun.” To be somewhere so isolated, alone with this gigantic Monastery that was 200 years older than the Treasury, was remarkable. I was in awe. 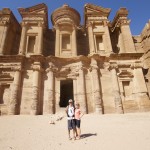 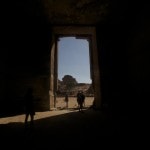 We decided to climb up to the very top breathtaking viewpoint. We could see the preserved city in broad daylight with the Jordanian flag swaying above us. It was truly amazing. 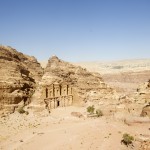 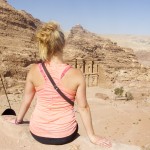 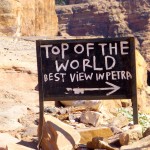 After completing the Monastery steps, we started on another path to the royal burial site – the site of the most important king after Mohammad. By then it was about 18:00 and starting to get a little shadier, which was a much needed break after 6.5 hours in the sweltering heat. Petra had completely emptied out and we felt like the only people there. We trudged along back to the Treasury to find no one in front of it! It was that much more unbelievable – truly an incredible piece of architecture. 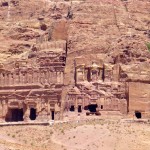 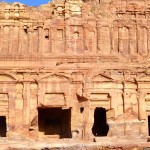 We took off back through the tourist-less gorges and finally made it to our hotel. We were so exhausted, we barely made it to dinner. Halfway through our meal we heard the nightly call to prayers come on the loudspeakers all over the whole city; it was absolutely fascinating.