By now you've probably learned how best to access Bhutan, and what our first two days were like in this off-the-beaten-path destination. On our third day, it was time to depart the Thimpu Valley for the Punakha/Wangdi Valley, site of Bhutan's most significant fort. After a brief stop at an overlook to view the small but beautiful Thimphu Fort and Buddha Point (on the opposite side of the valley), we continued the long, winding drive up the mountains to the Dochula Pass at 3,150m (10,400 ft).

There we stopped for a breathtaking view of the eastern Himalayas, the highest peaks in Bhutan with several over 7,000m (23,300 ft) — the highest of which is Gankhar Puensum at 7,570m (24,836 ft). An additional highlight was the Druk Wangyal Monastery (imagine living at 10,400 ft!) and 108 memorial stupas built with a gracious donation by the retired fourth king’s wife. In fact the Queen mum herself was paying a visit when we arrived. We were able to catch a brief glimpse of her as she entered the royal limo. 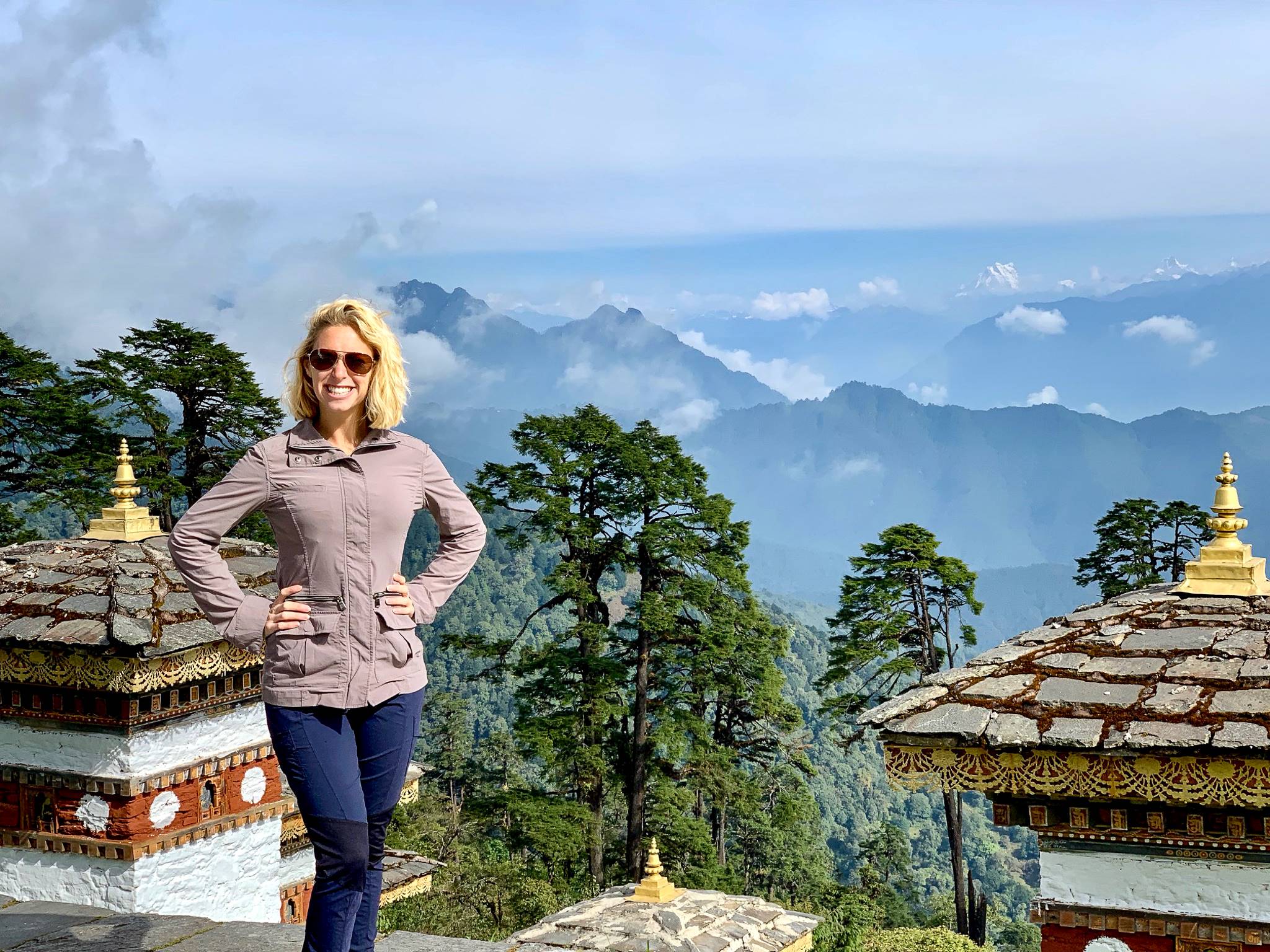 Back to the van, there was a long, winding descent into the valley. After a total of 3+ hours, our destination came into view — the magnificent Punakha Dzong (fort), built in 1637 at the strategic confluence of two rivers. Some time ago river flooding washed away the covered bridge leading to the entrance and damaged nearly half the fort. A major restoration job replaced the bridge and rendered the damage an unpleasant memory. The walls and buildings of the fort form a rectangle surrounding three courtyards and three temples. The beauty and intricacy of the designs have to be seen to be believed; photos cannot do them justice.  Currently the dzong functions as both a monastery and administrative office center for the region (as do almost all of the country's old forts). Its more recent historical significance is as the site of the coronation of the first king in 1907 and all four subsequent kings. It is also the monastery used by the royal family for its baby naming ceremonies. 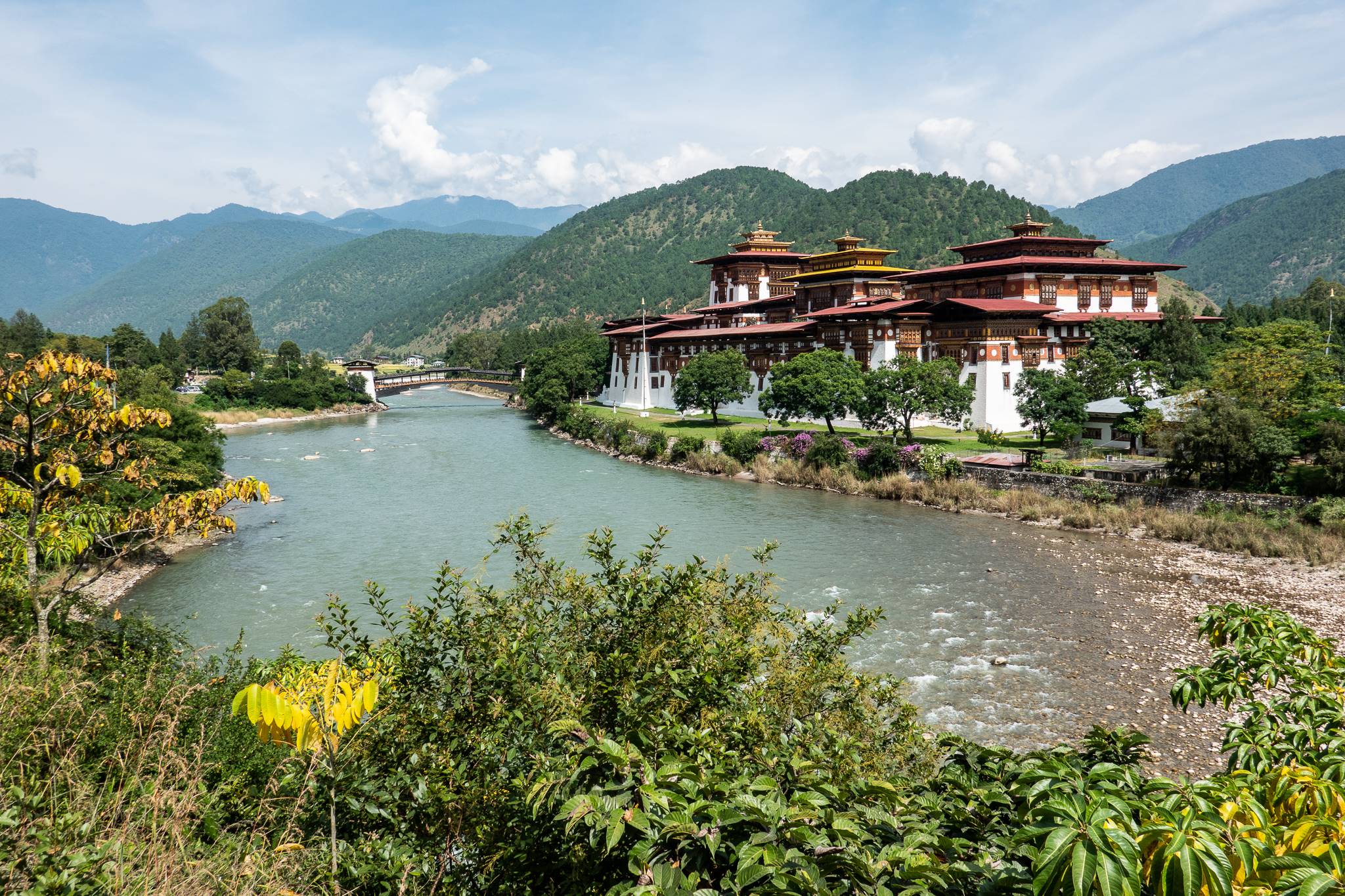 Next we drove upriver for some whitewater rafting. The river was a beautiful light blue in color, and the current was rather swift. Fortunately the rapids were not too intimidating; so while we got a few good exhilarating (cold!) soakings, we were never in danger of falling out. And the scenery along the way was interesting. Do not be stubborn like me — if the guides offer you a silly-looking waterproof jacket and pants, take them! 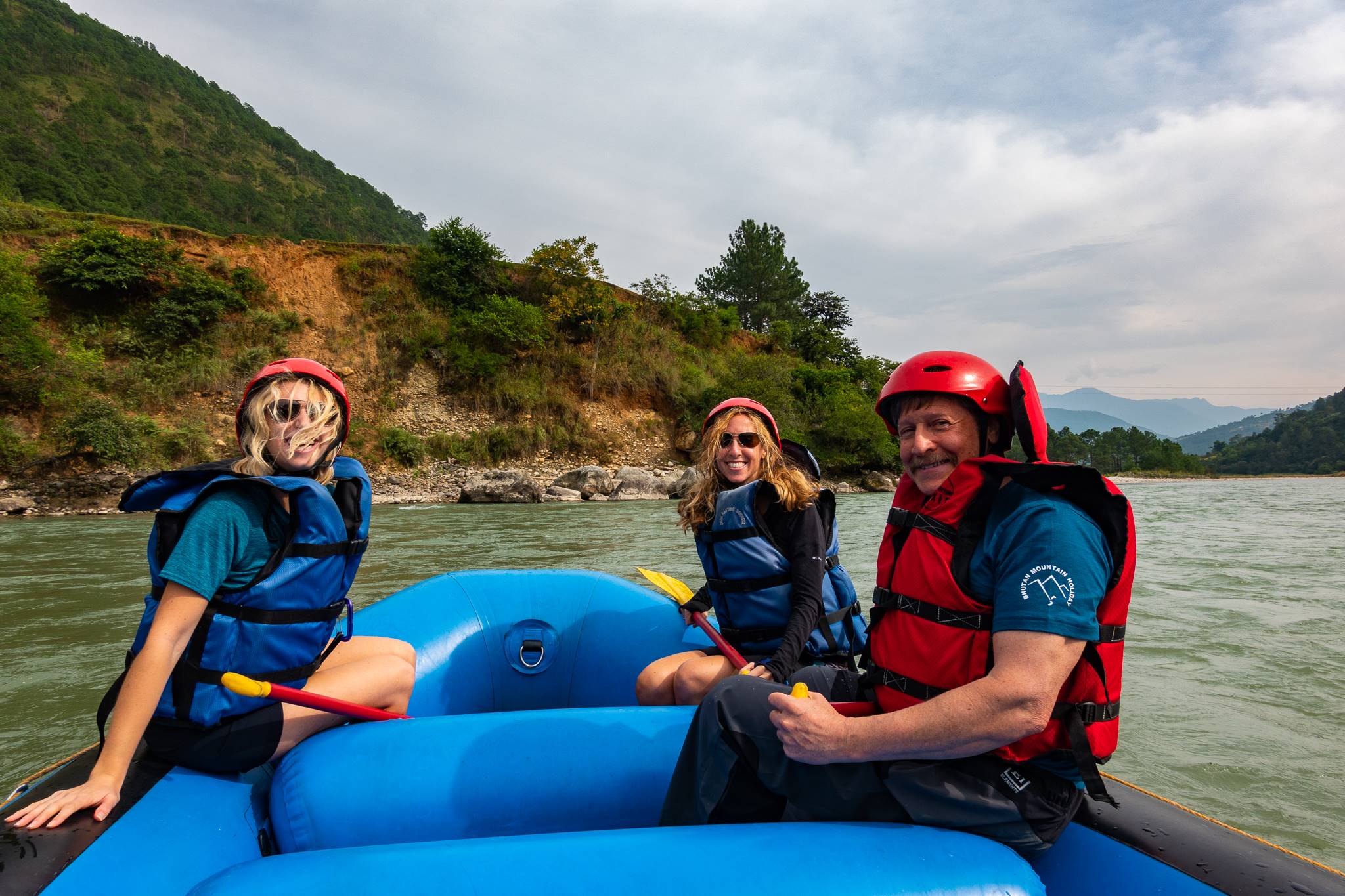 After driving through an endless array of rice terraces, our final stop of the day was the small farming village of Lobesa. Its attraction is its celebration of the phallus. Images are painted on many buildings throughout the town, and shops sell models of all sorts of shapes, sizes, and colors. You could even get a three-foot long model, although I defy you to try to carry that onto your flight home! Aside from that, the shops also sell some beautiful paintings, particularly of Buddhist mandalas. If you’re looking to bring one home (I was), I highly recommend purchasing them here. 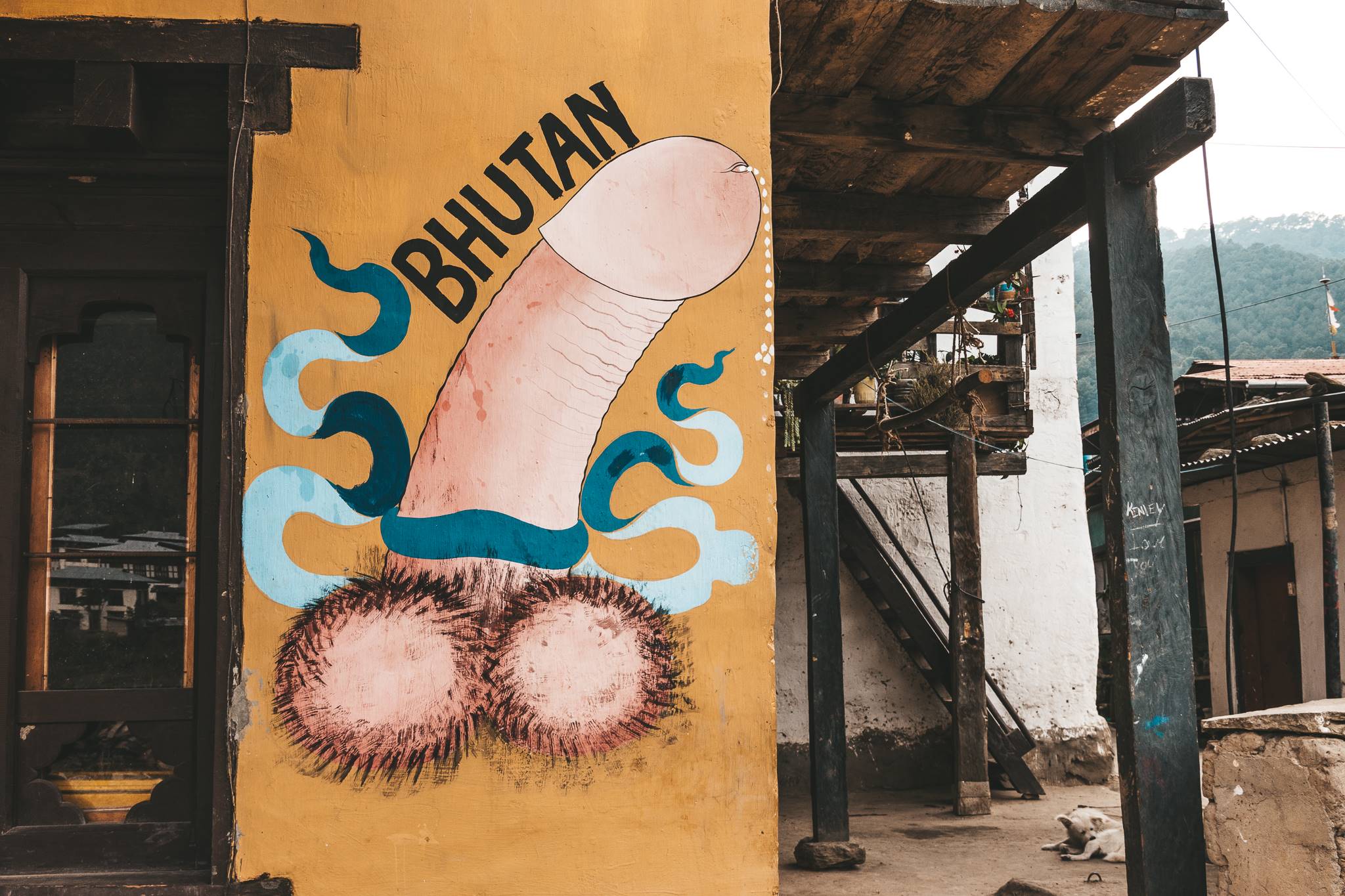 A short hike (which gave us a spectacular view up the valley with a progression of mountains on both sides) to the top of the nearest hill brought us to the source of the town's notoriety: the Chimi Lhakhang, a special monastery for fertility. It is devoted to a 15th-Century monk known as “The Divine Madman” who used the supernatural power of his phallus to “capture” evil in the form of a black dog and bury it under the black stupa. Hence the town's notoriety. Incidentally, he believed that sex was the best way to honor Buddha. Today, hundreds of couples who seek fertility flock to the Chimi Lhakhang to perform a ritual (which includes walking carrying a very large phallus around the monastery) in hopes of being blessed with a child. Inside, you can see testimonials from couples who have come from all over the world to perform the ritual. 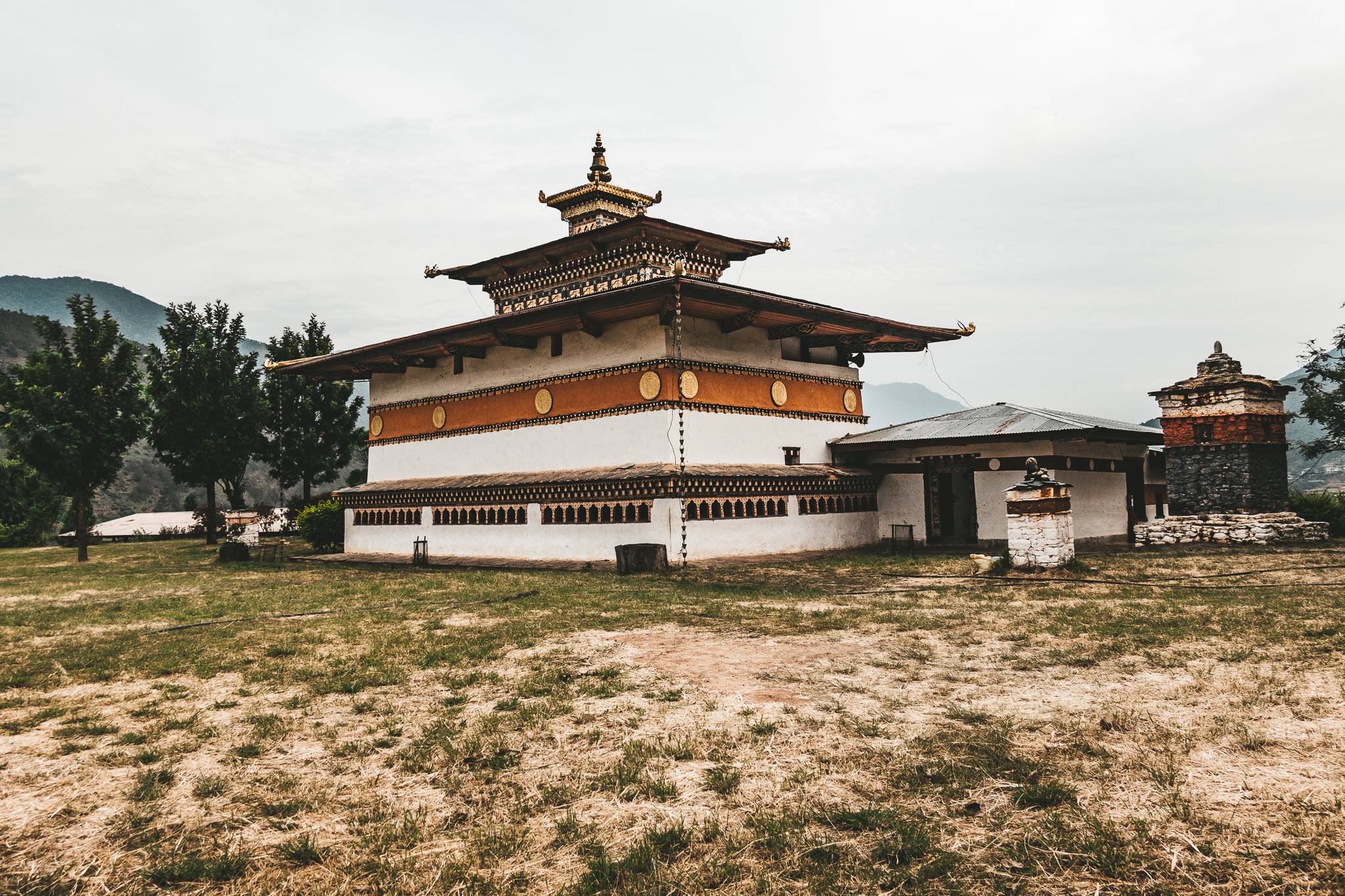 After an epic sunset, we climbed back into the van for the long (4+ hours) difficult drive back up the mountains through the Dochula Pass once more and all the way on to Paro. 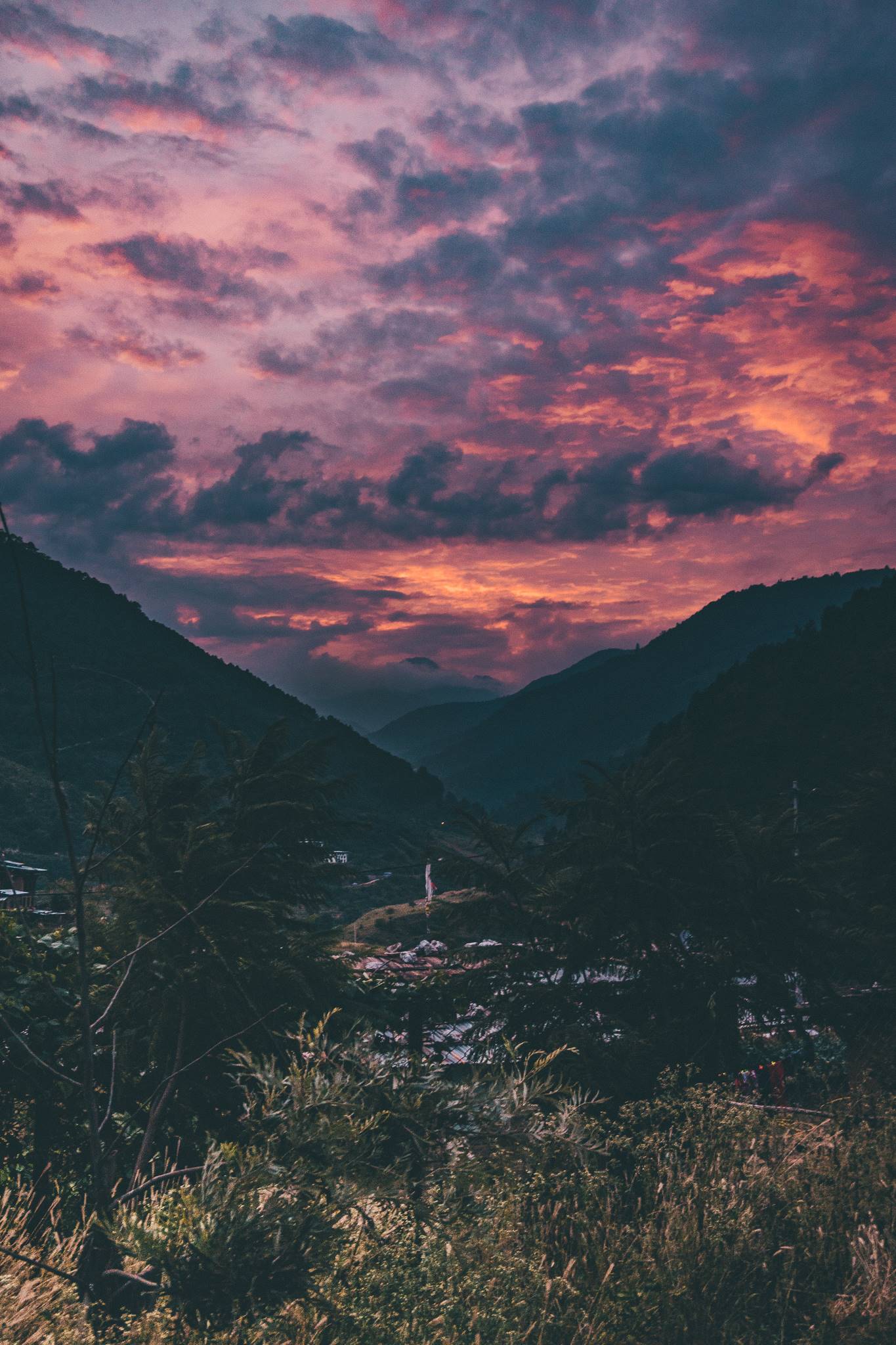 Many kudos go to our driver of Bhutan Mountain Holiday for negotiating those narrow roads in the dark. At last, exhausted and hungry, we arrived at the lovely Nyabling Resort – our home in Paro for the next two nights. We were eager to get to bed early, as the following day we had our alarms set early to climb to Tiger's Nest Monastery! 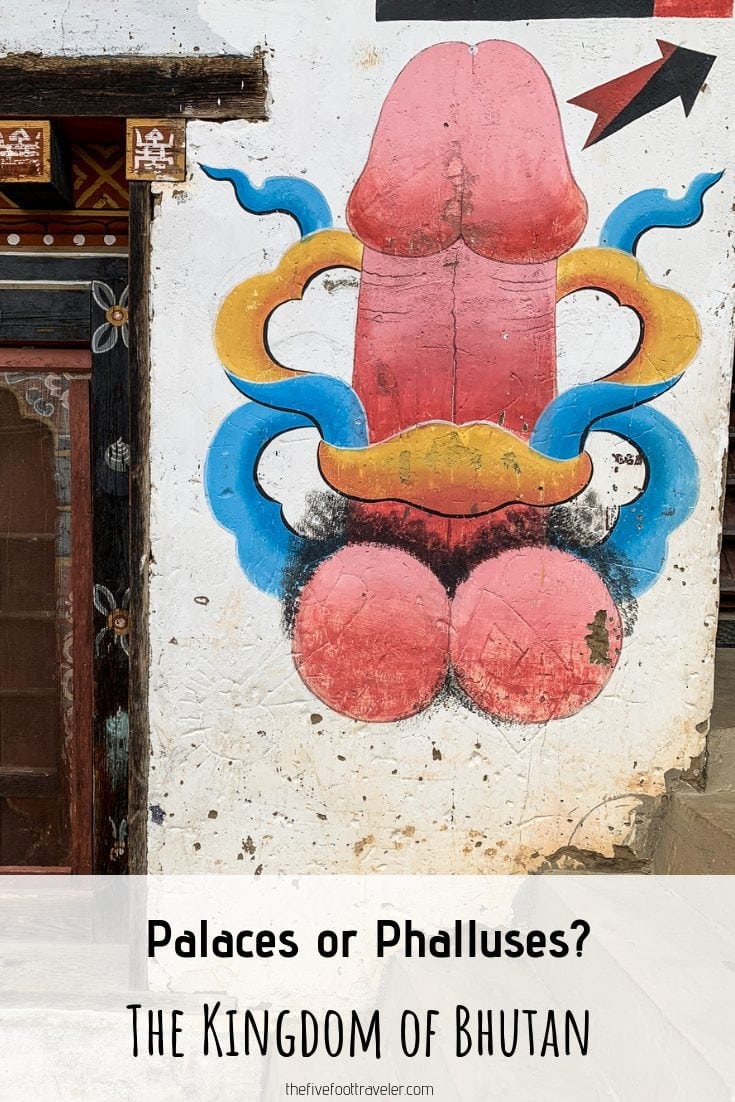