Even If You’re Not, Pretend To Be

No One Can Tell The Difference 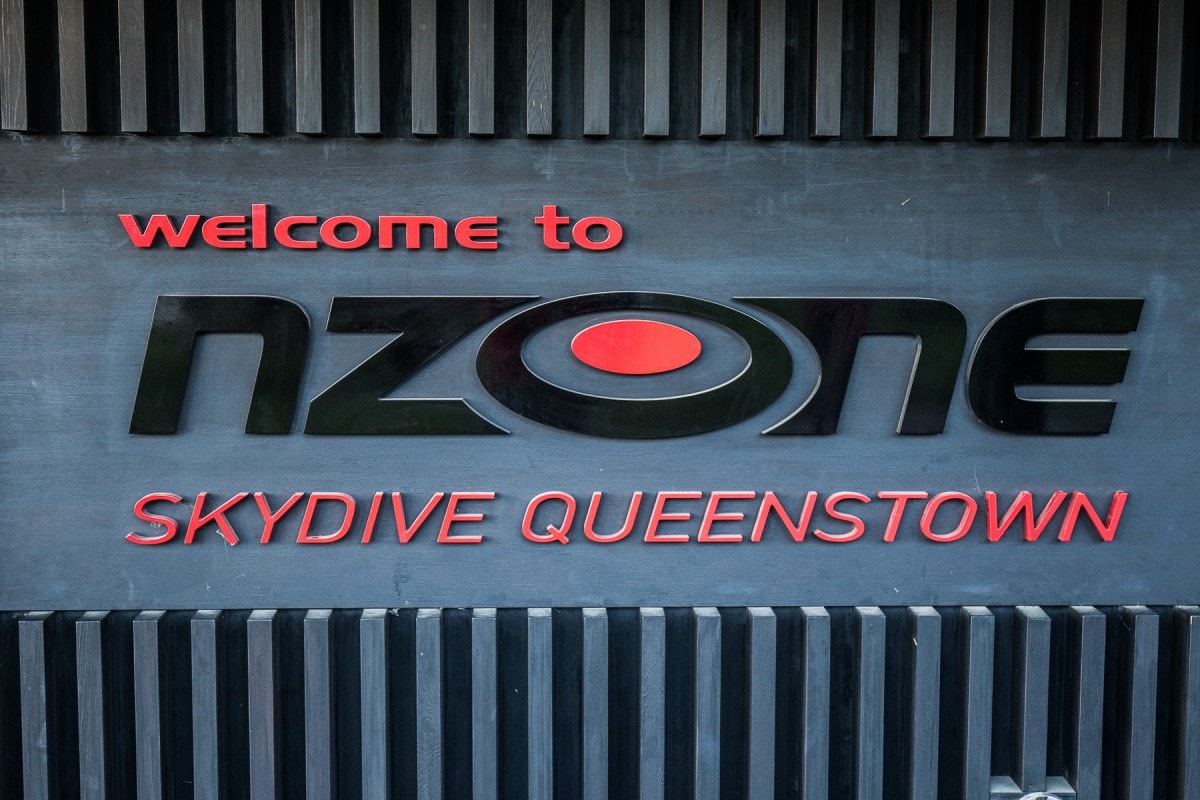 For as long as I could remember, I had a debilitating fear of flying. So crippling, in fact, that I would have to take high doses of Xanax before flying and, even still, I’d get a massive panic attack. Five years ago, after three sessions of hypnotherapy, I went on my first flight with neither drugs nor a panic attack.

While traveling, I love experiencing the adventure activities. Up until now, there was only one “main” activity that I’d never tried: Skydiving. For years I’ve been tempted to skydive, specifically in Rio de Janeiro and Cape Town, but I had always told myself that when I skydived it had to be in New Zealand. Granted, I had no future plans to travel to New Zealand; I just knew that it was supposed to be one of the greatest places in the world to skydive. 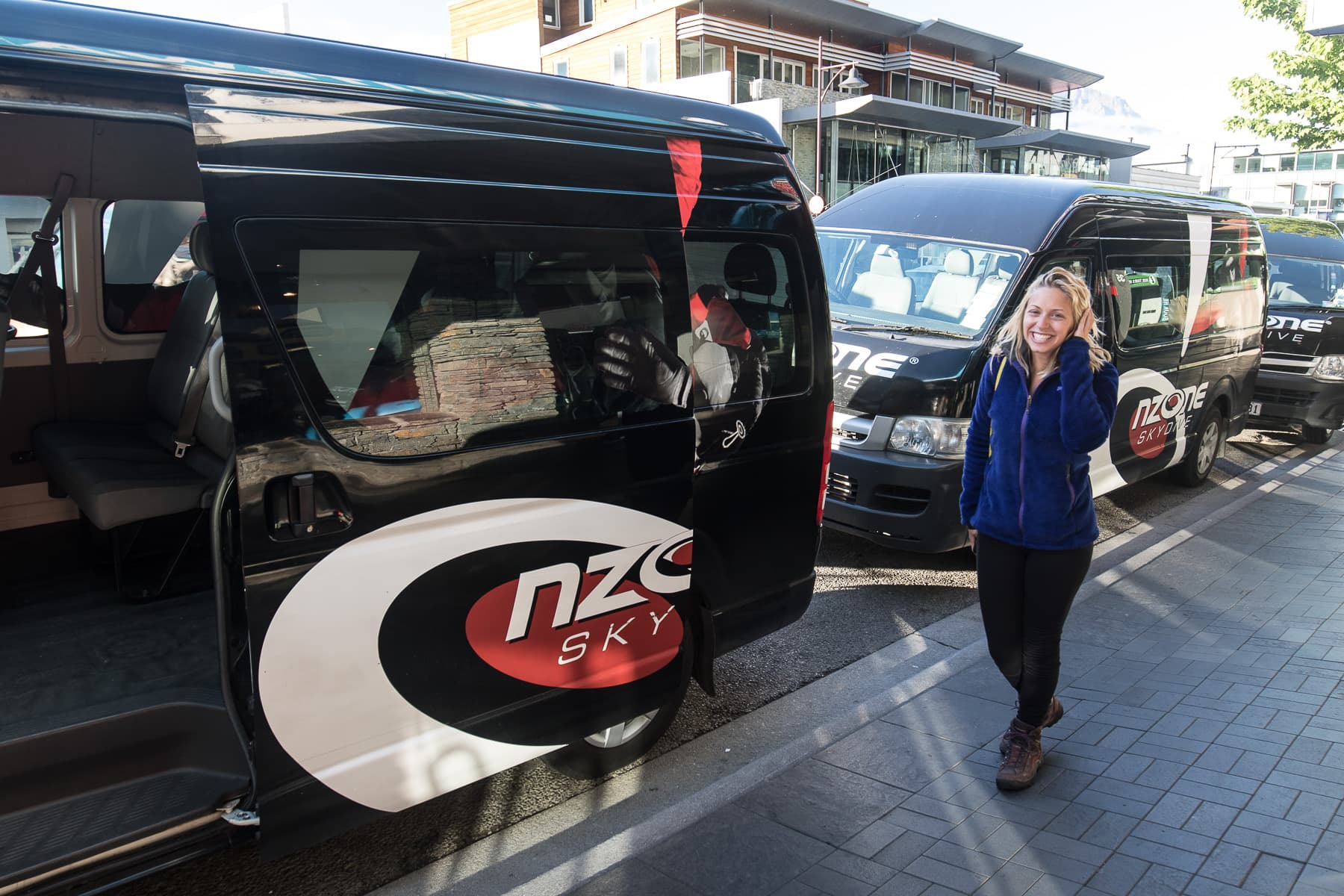 Fast forward five years, and I found myself in New Zealand. We all knew what that meant  — it was time for this Five Foot Traveler to skydive! Coincidentally, I ended up jumping out of an airplane on the day that marked five years without a panic attack while flying. 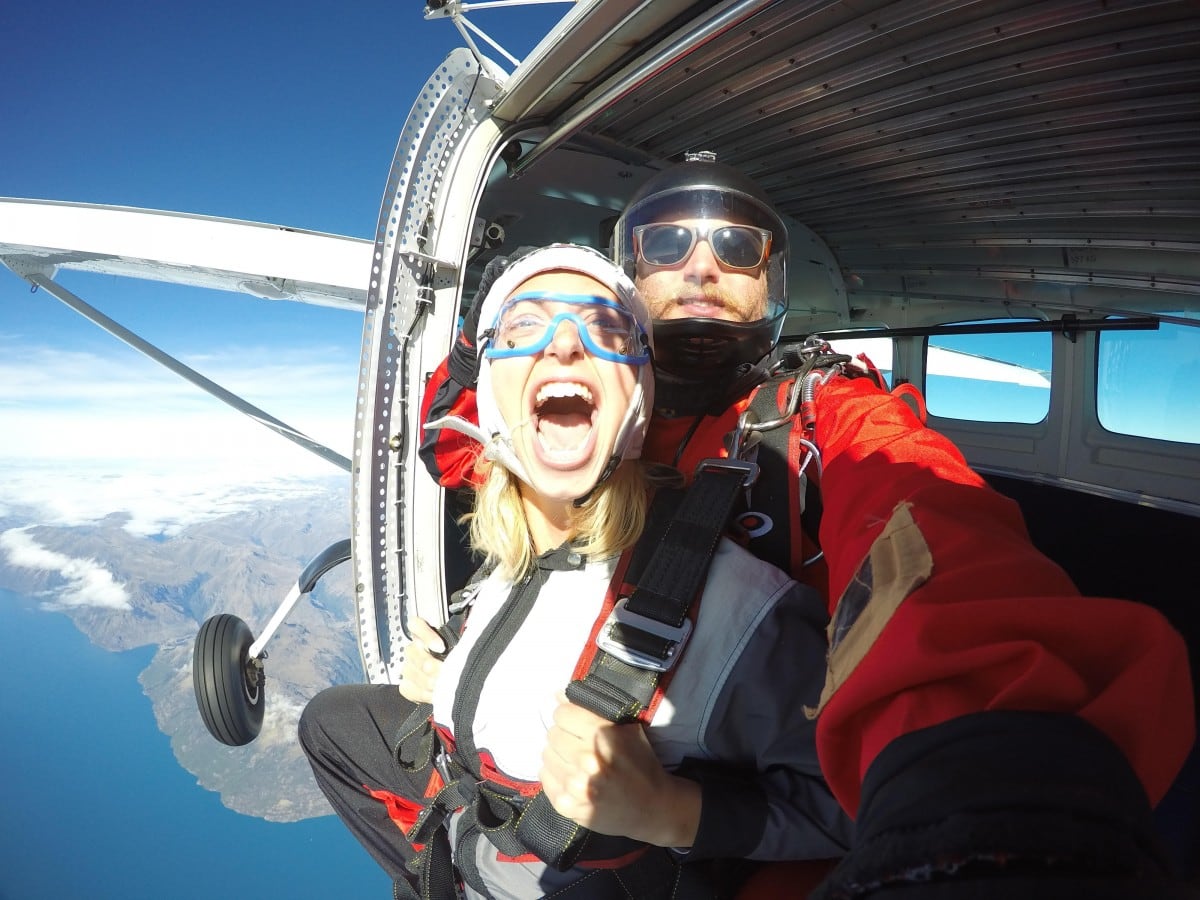 Queenstown is known to many as the adventure capital of the world, and I’d heard incredible things about NZONE Skydive, New Zealand’s first tandem skydive company. Naturally, I had to go with the best!

Leading up to the jump, I was slightly freaking out. Actually, slightly is putting it kindly. I was full-on freaking out and started questioning whether or not I could handle a small airplane. People too afraid to skydive typically pose the question, “Why jump out of a perfectly good airplane?” I, on the other hand firmly believe that the question should be, “Why stay in a perfectly good airplane?” This girl would much rather be (safely) free-falling at 200 kph (124 mph) than sitting in an airplane… 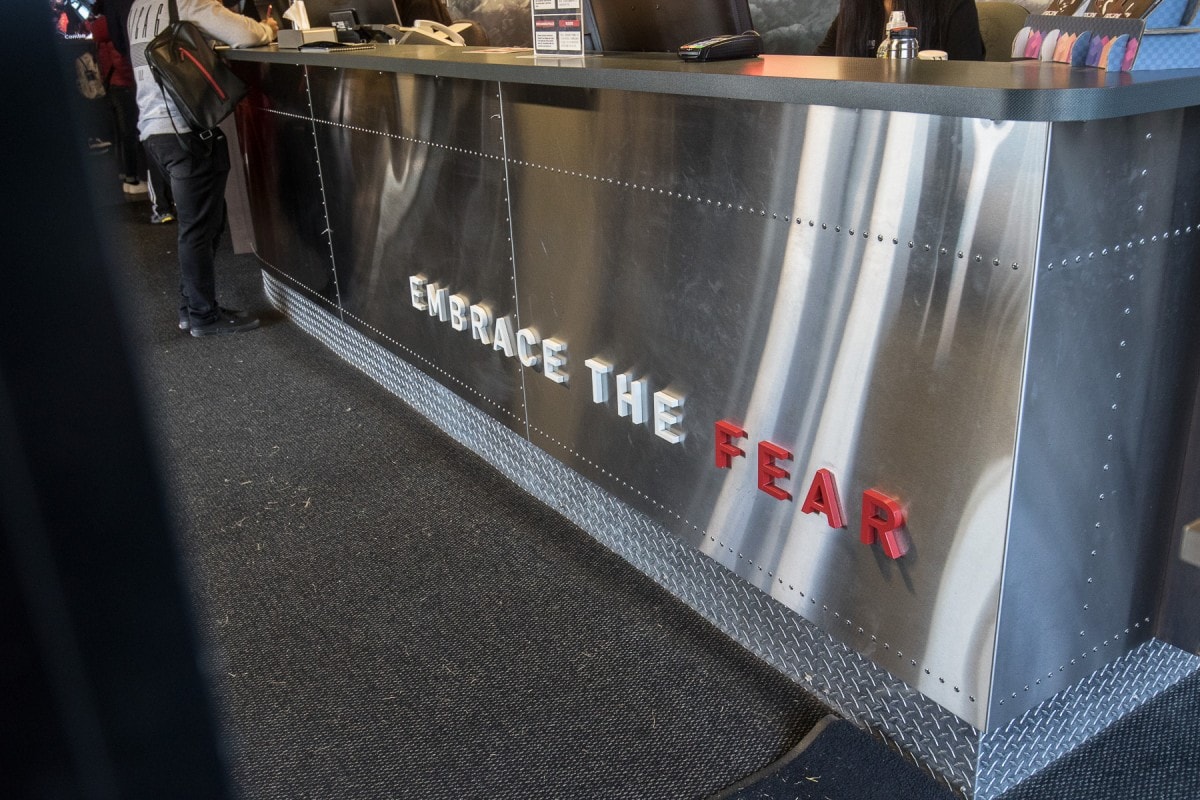 After being walked through a quick safety briefing (and virtually signing our lives away — sorry for the scare mama!), we loaded onto the NZONE Shuttles to take us to the NZONE Drop Zone set at the foot of the Remarkables mountain range. We were given a number and told to report to the Discovery Zone when it was called. NZONE does a fantastic job of distracting you by providing a beautiful waiting space, free WiFi, drinks, snacks, and a souvenir shop. If none of that is of interest to you, you can try not to psych yourself out by watching the behind-the-scenes action, where the packers arrange and pack all components of our set-up — canopies, lines, and a riser to be sure that each part functions in a certain order, ensuring that your parachute ultimate opens with ease! 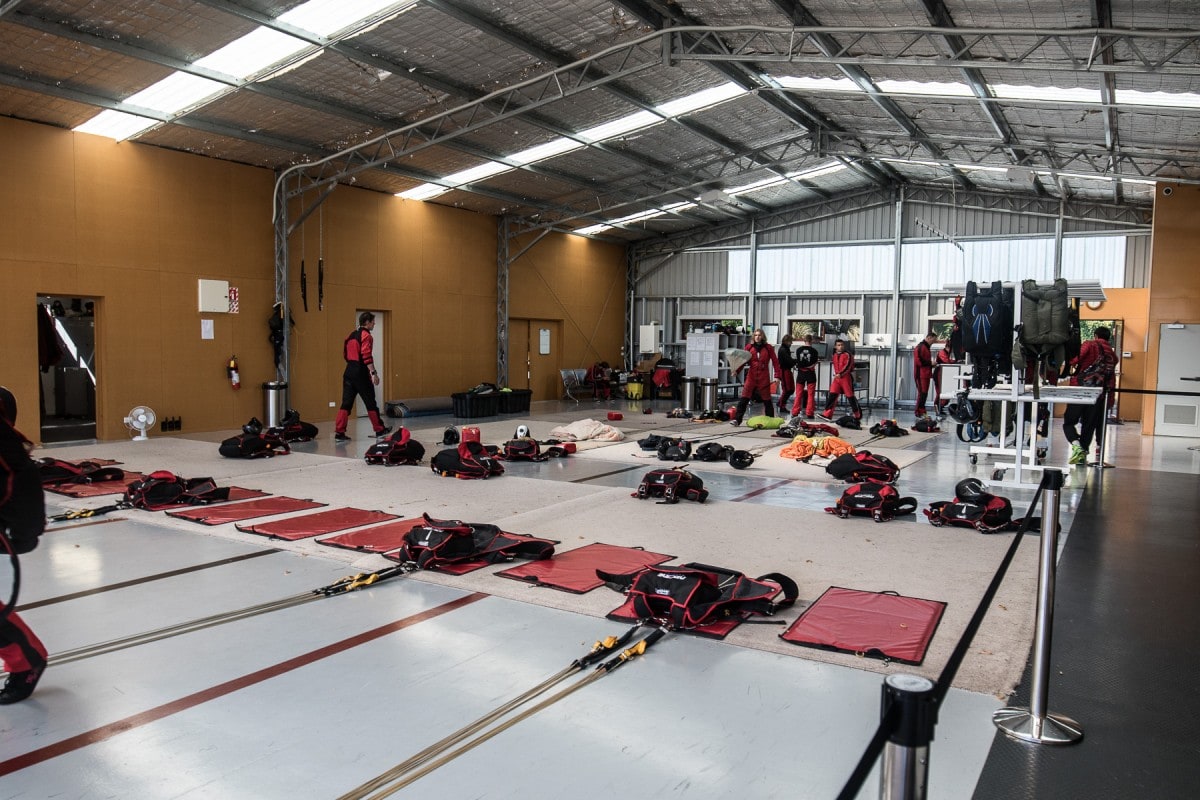 About ten minutes of waiting later, we were called into the “behind-the-scenes” to get IN the scene! We were given a locker for our belongings, a jumpsuit (they had one small enough for me!), hat, goggles, and gloves (should you want those).If you’re a morning jump, as were we, it is quite chilly so I’d recommend wearing layers; David and I each wore a base layer top and bottom under our regular comfortable clothes. Wearing workout clothes are the best way to go, as they’re form-fitting and moveable. 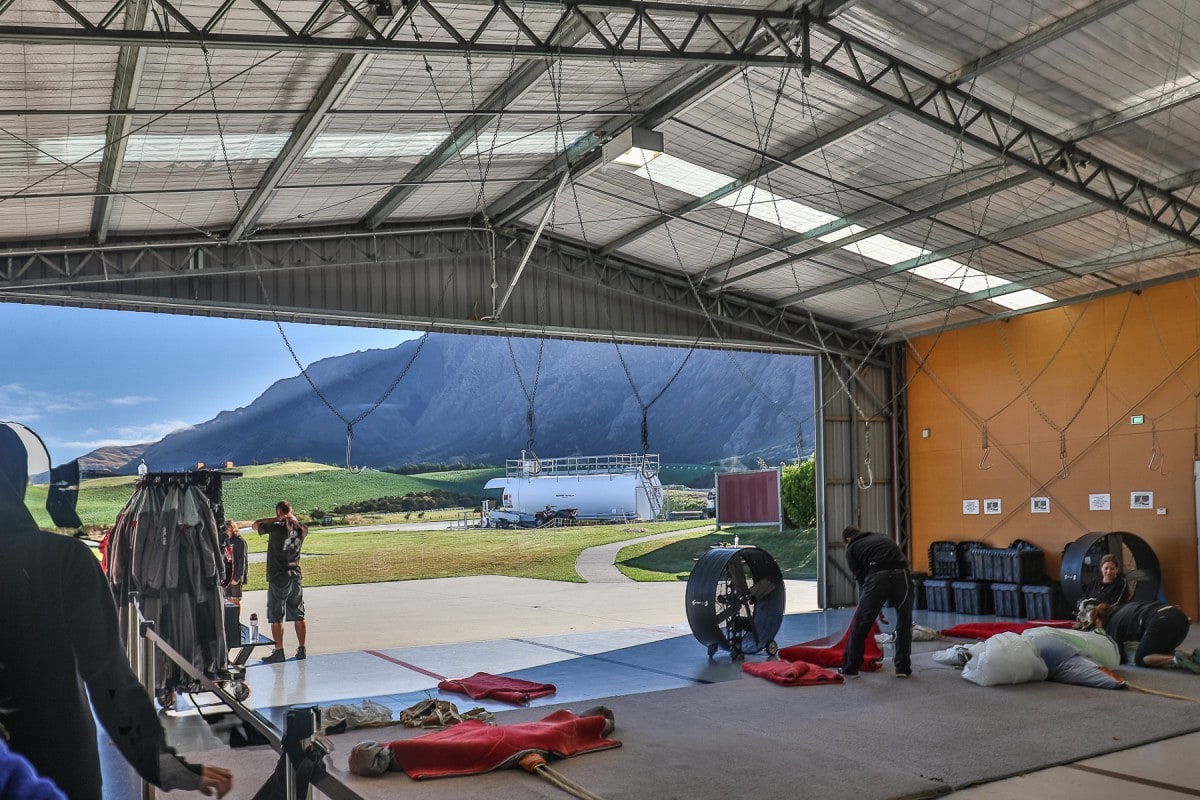 All geared up, I met my Jumpmaster, Caue, and free-fall photographer, Ruben. They quelled my fears relatively quickly. In fact, each Jumpmaster employed by NZONE has done over 1,000 jumps, and the company as a whole has taken over 300,000 people tandem skydiving in the last 25 years!

Before I knew it, we were being rushed into our tiny little plane. The “Supervan 900” is so small that you couldn’t even stand up if you tried. Everyone becomes really close really fast as you sit in the lap of your Jumpmaster, with your free-fall photographer in your lap. 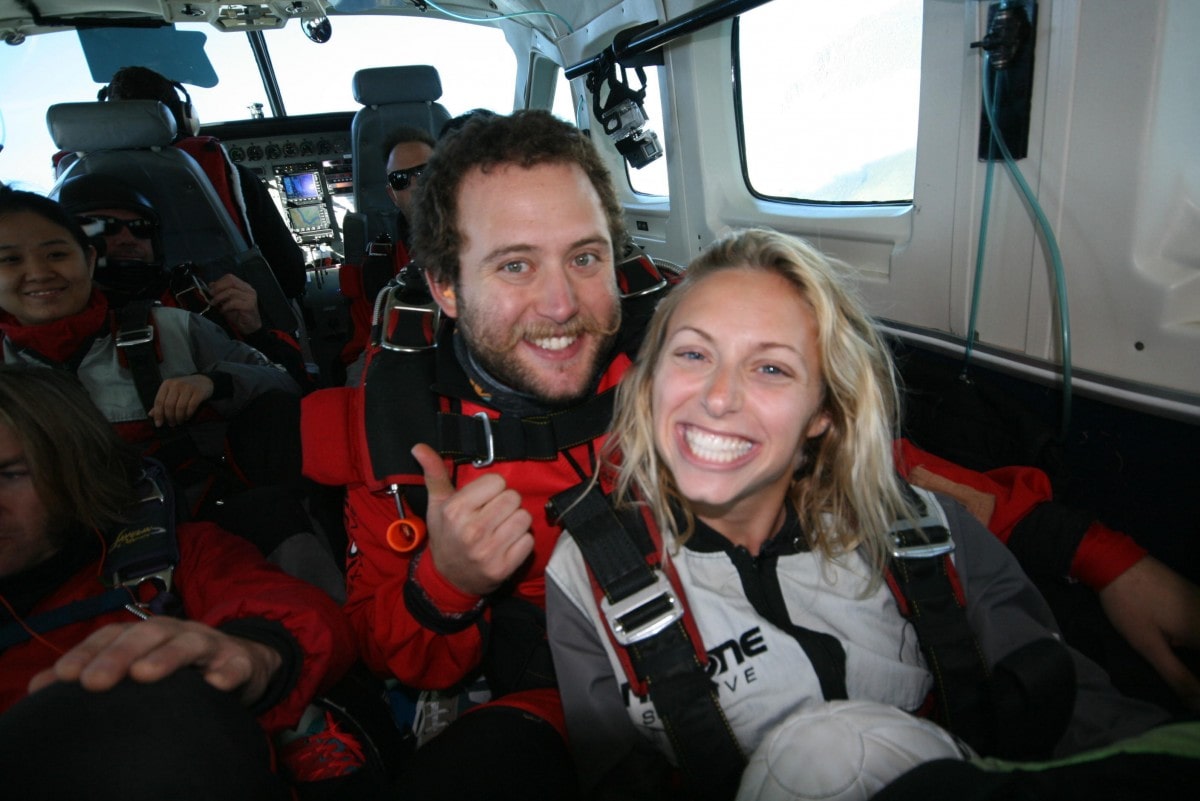 Take off was so quick that I almost couldn’t even process that I was in the air! Next thing I knew, my adrenalin kicked in and I finally allowed myself to feel complete and utter excitement. With Caue and Ruben laughing away, they didn’t believe I had a fear of flying. At that moment, I didn’t!

Seconds later, David and his Jumpmaster Kale jumped out. Before I knew it, I was flying through the air too. That first moment when your Jumpmaster rocks you up and out of the plane is so surreal it’s difficult to put into words. It’s as if the world stops for a few minutes, then catches up to you all of a sudden as you free-fall for 60 seconds above the absolutely stunning Queenstown and surrounding mountains. Taking it in, I realized that it was for real. I was soaring. 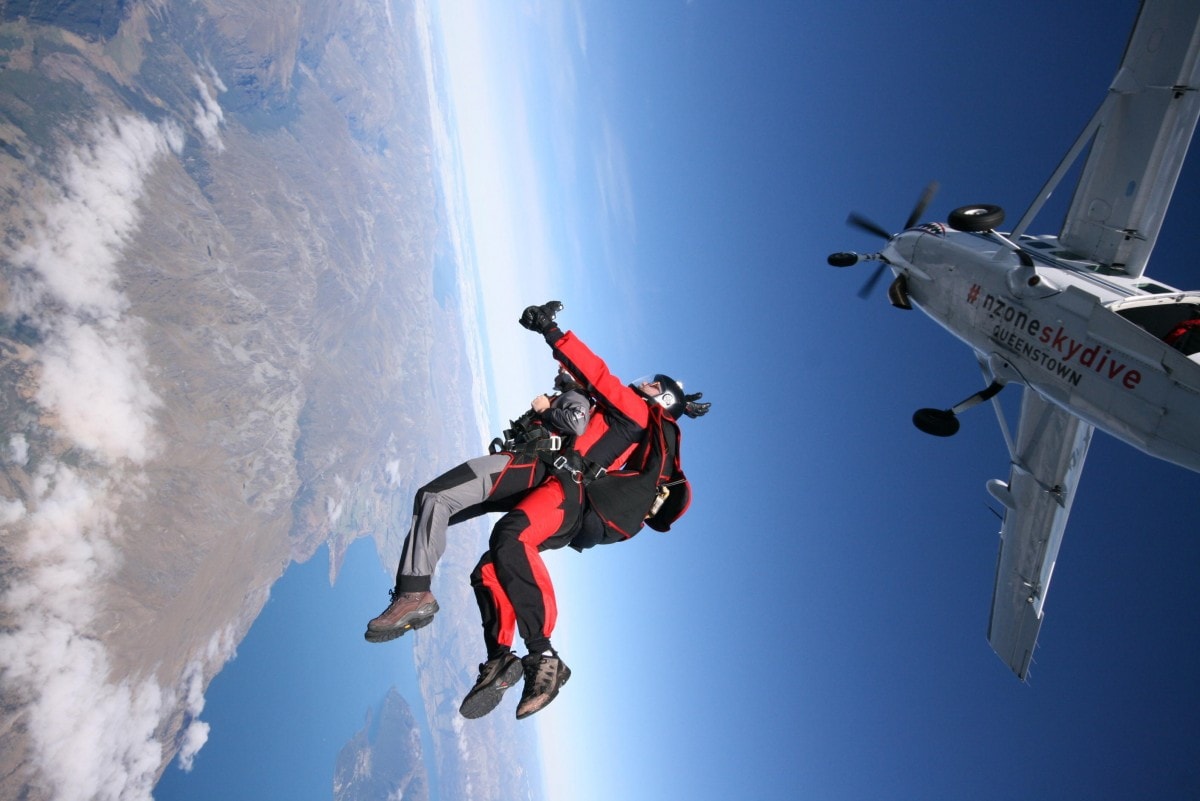 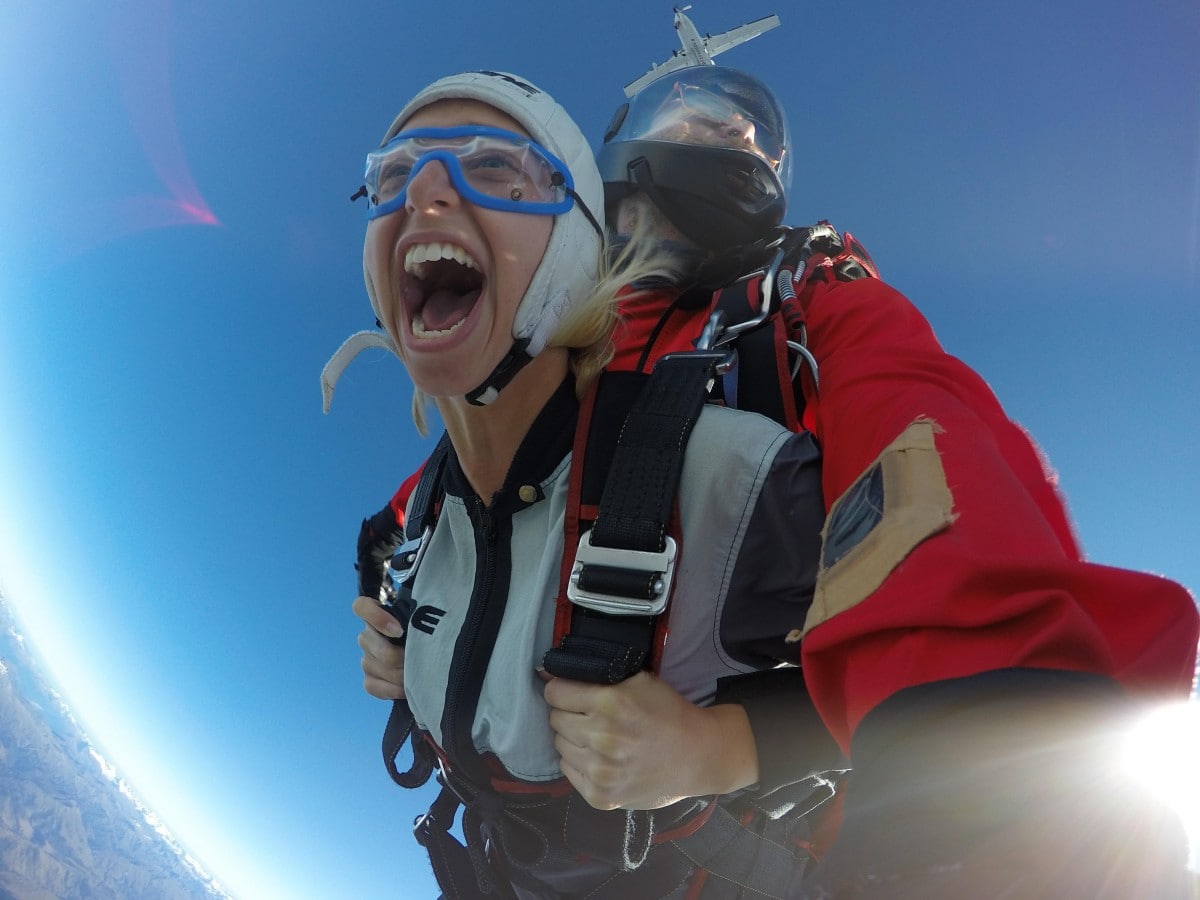 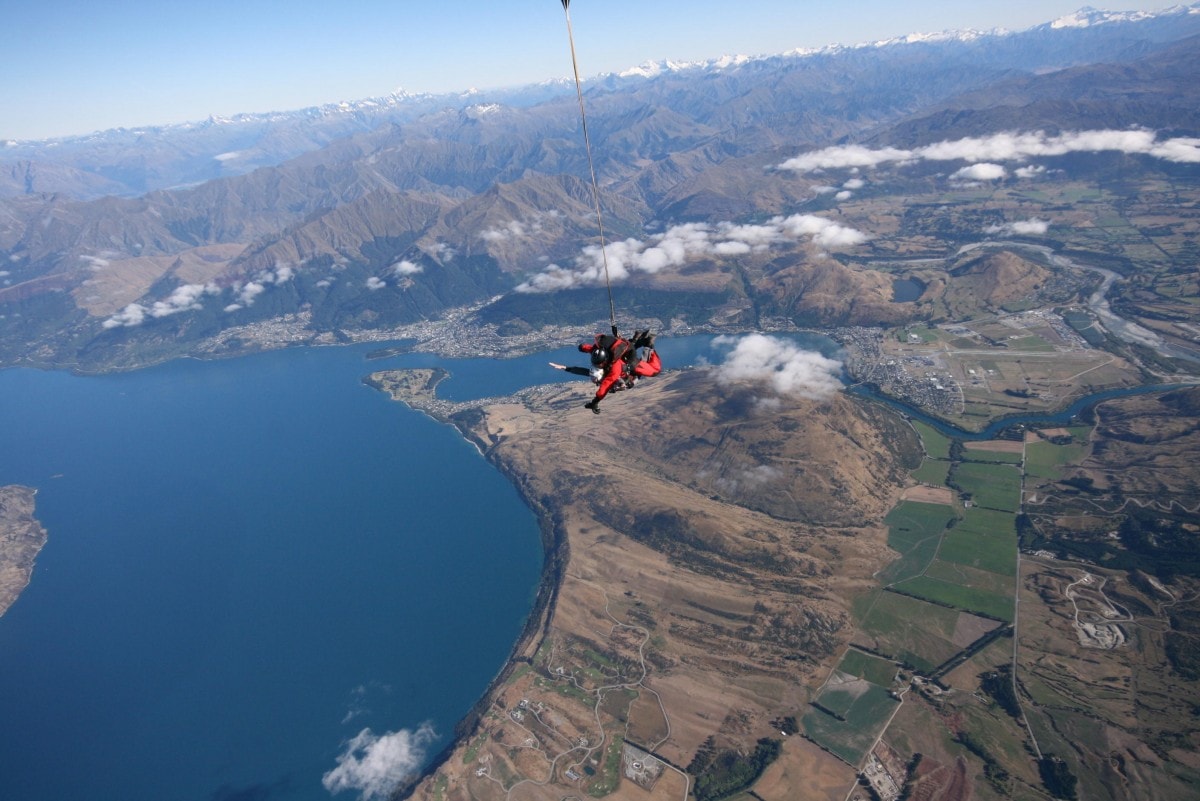 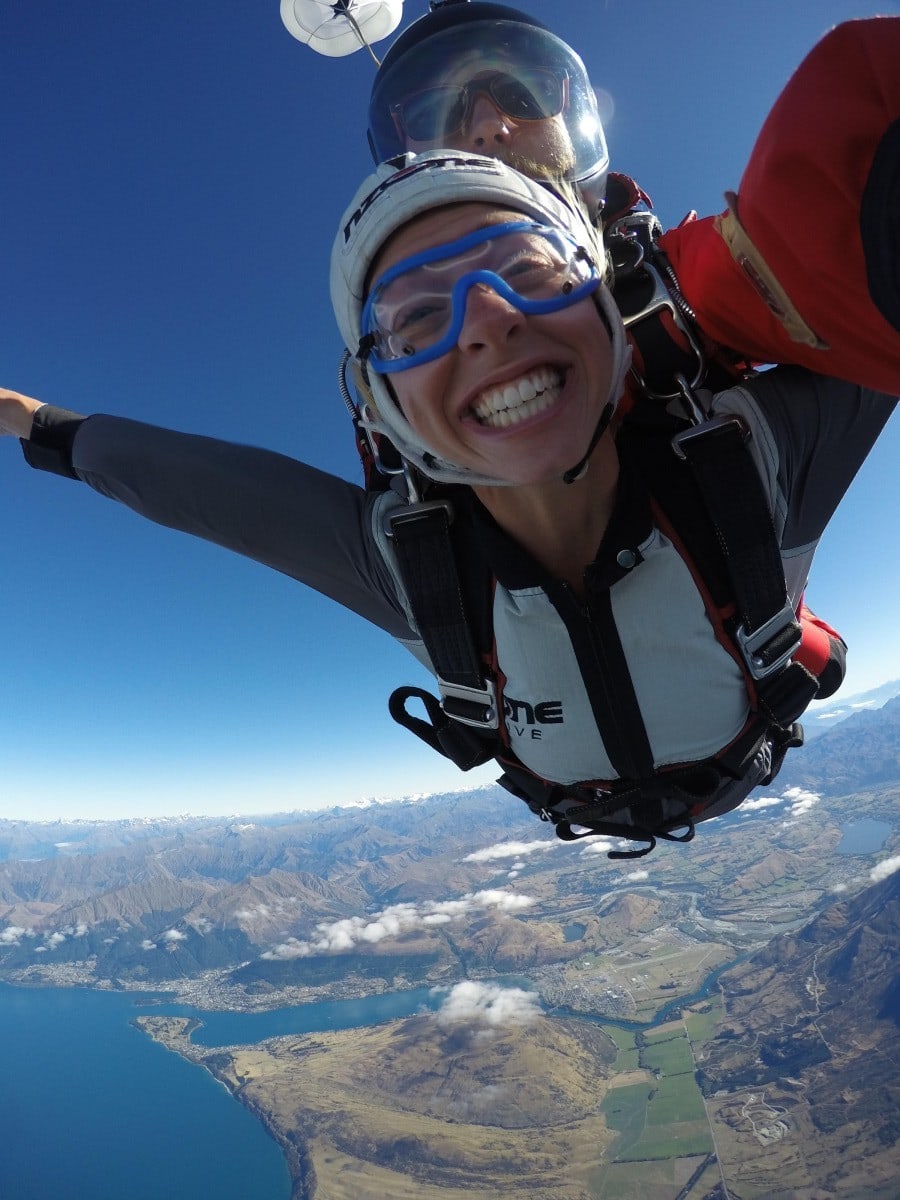 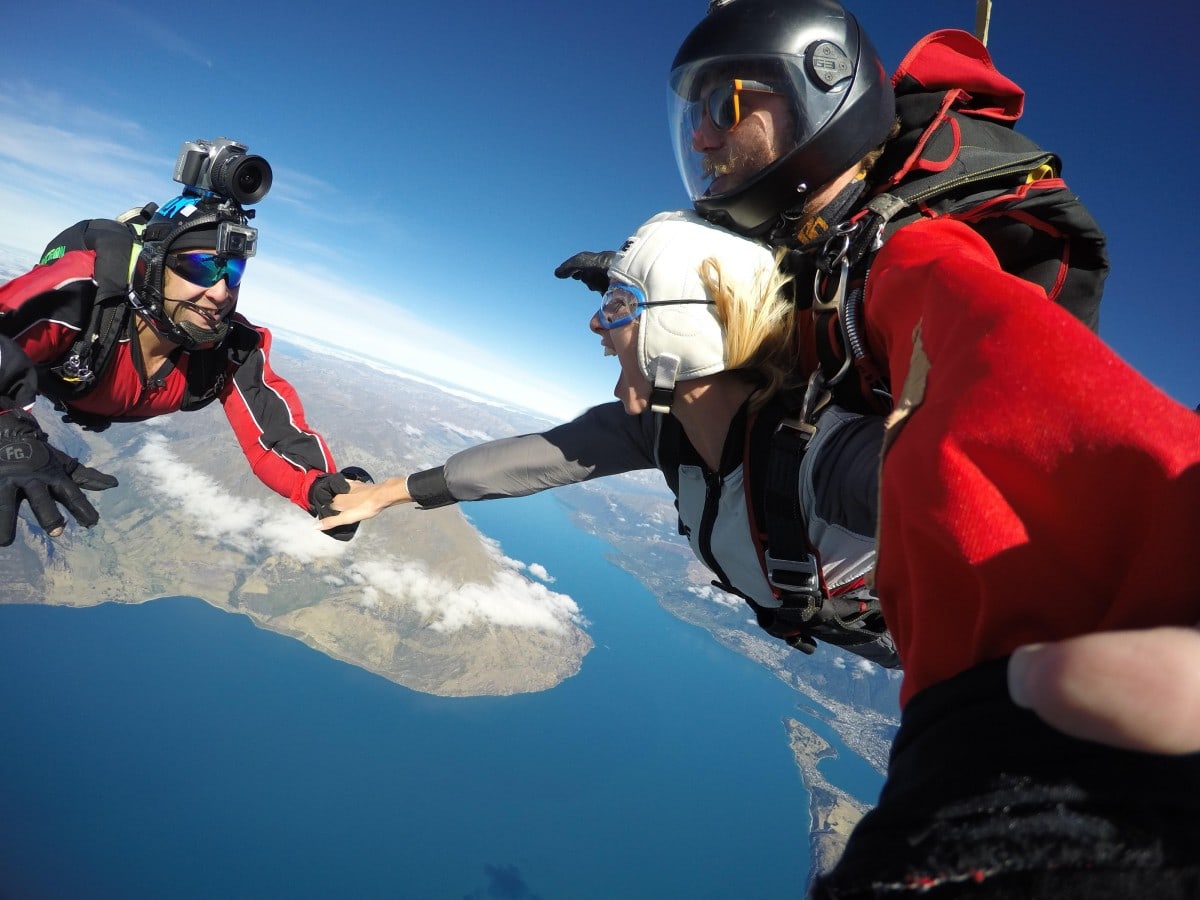 A minute passed and WHOOSH the parachute deployed. It comes as a shock and a jolt after you feel like you’re suspended in air. Once we were parachuting, Caue gave me control of the parachute itself and taught me how to spin us in circles. It was both scary and amazing all in one (pardon my oh-so-embarrassing face). 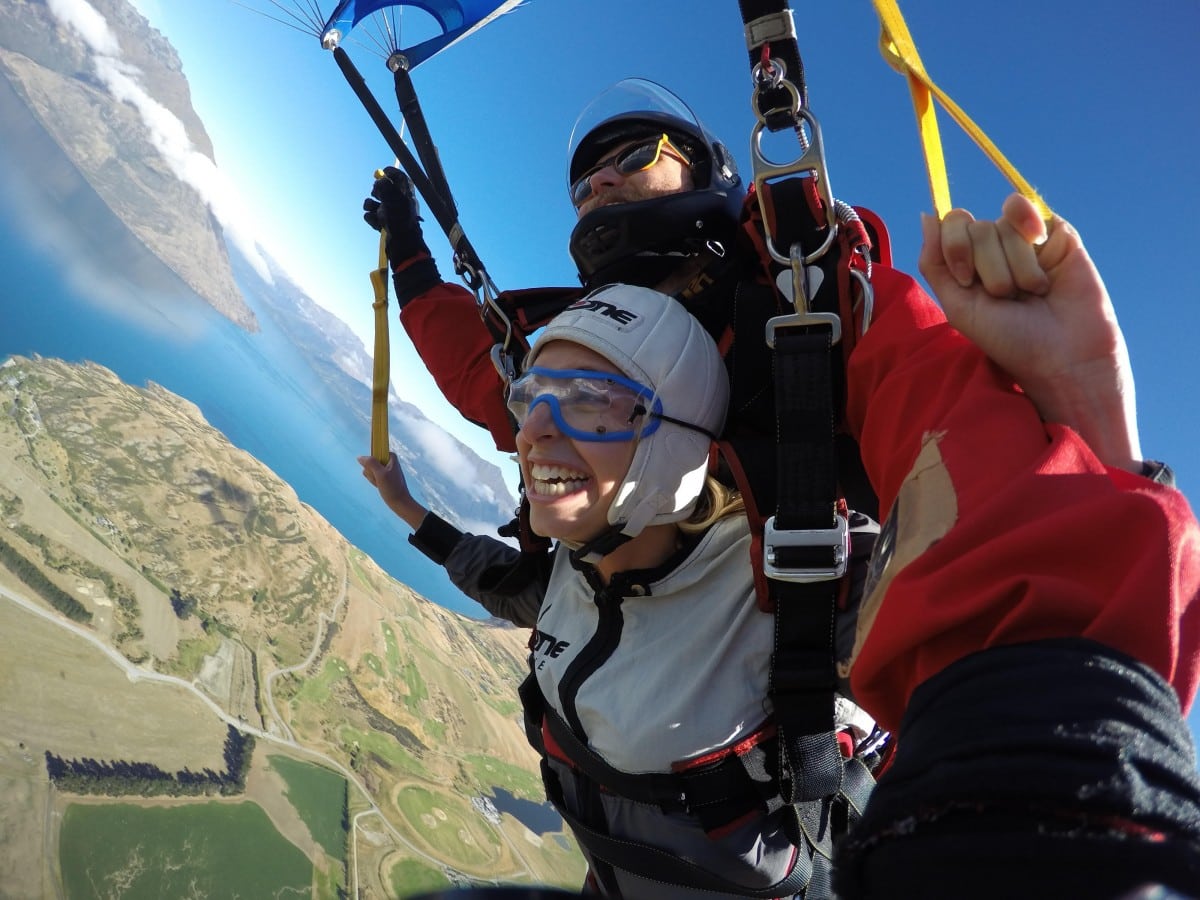 After what felt like ages, but was really only about five minutes, we had the smoothest landing possible. 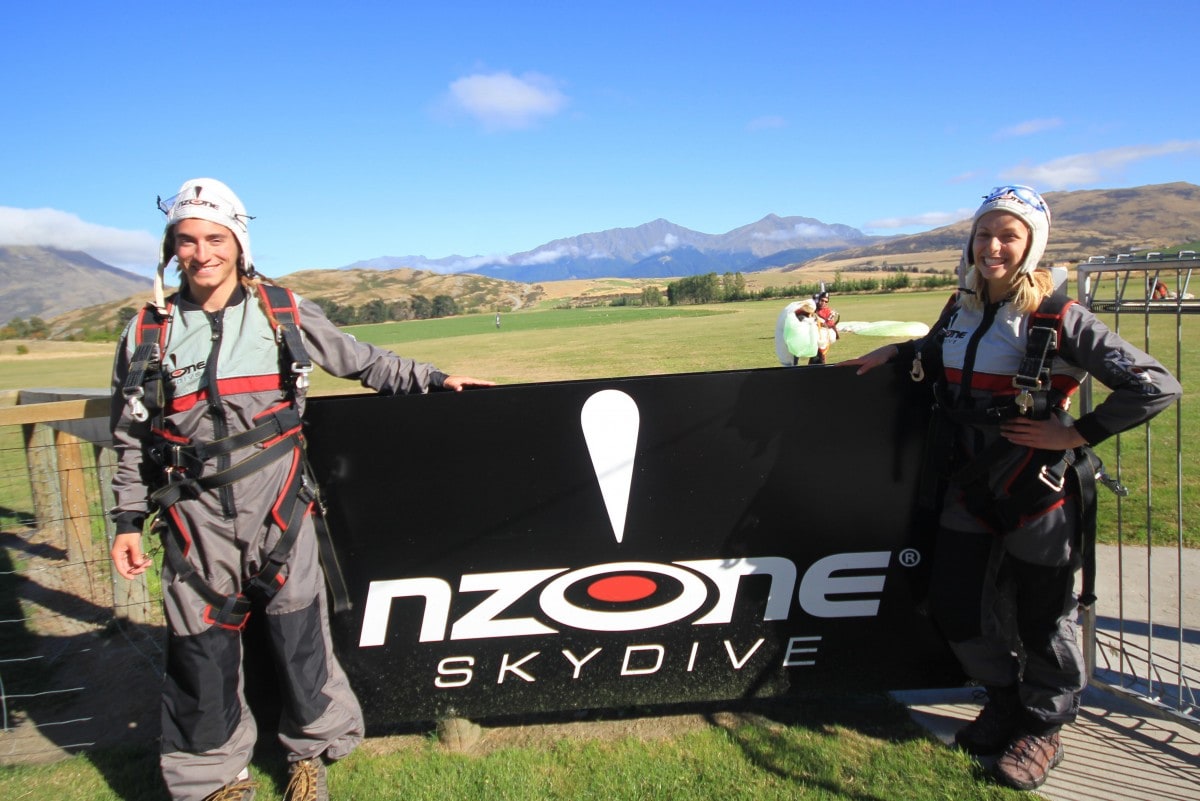 Check out the AWESOME video NZONE made!

I am proud to say that I HAVE OFFICIALLY SKYDIVED. A huge thanks to NZONE for encouraging me through the whole process and providing me some of the most epic footage around. 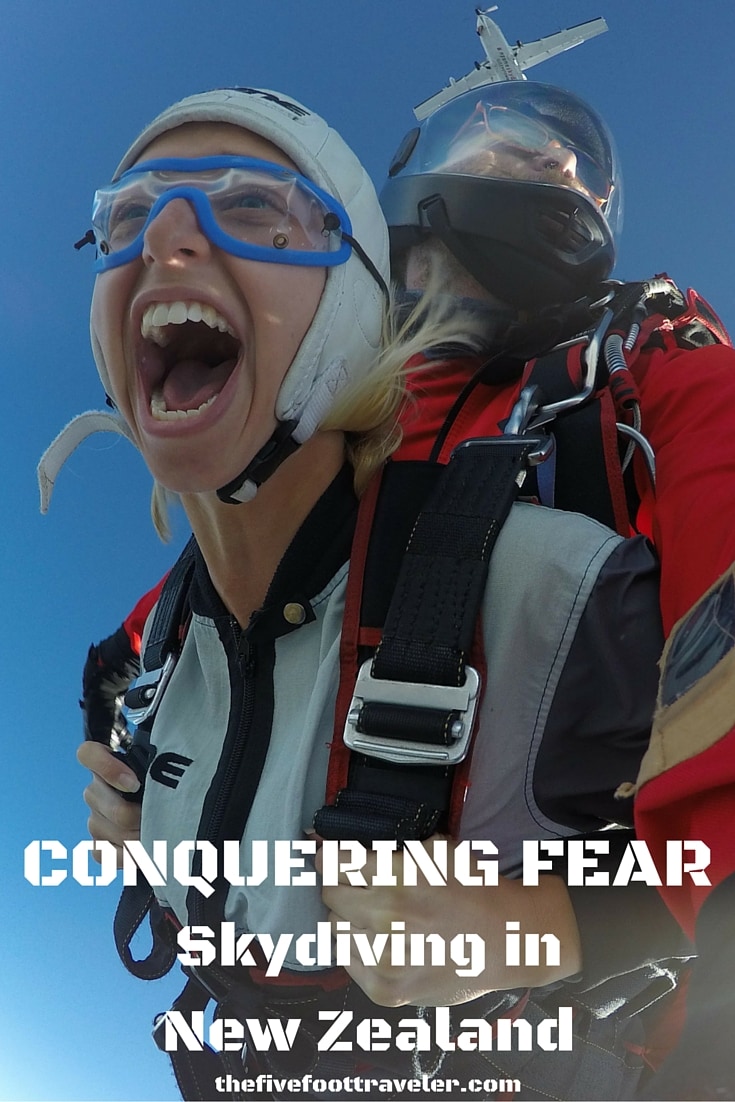 **Special thanks to NZONE Skydive and Air New Zealand for sponsoring our experience. As always, all opinions are my own.