Our road trip brought us to Outdshoorn, the ostrich capital of the world. Since Outdshoorn is home to the world’s largest ostrich population, we decided to educate ourselves a bit. Ostriches are vegetarians, largely eating plants and grass, but are capable of swallowing up to 50 grams of stones (to use for grinding). The ostrich neck is, in fact, so flexible that one even swallowed a 500 ml coke bottle! The ostrich industry began when merchants migrated from the Sahara to the Karoo. Marketing-wise, 15% comes from feathers, 25% from meat, and 60% from leather – ostrich is the second toughest leather in the world, following the kangaroo.

Fun Fact: If being attacked by an ostrich, lay flat on the ground with hands over your head because ostriches can’t kick downwards.

There were numerous parts to our tour at the Cango Ostrich Farm. First, we had an ostrich eat out of our hands, but since I’m small, the ostrich managed to reach around both sides of my head, in front of my face, everywhere to eat the food in our guide’s hand. 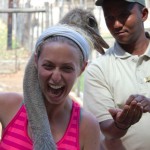 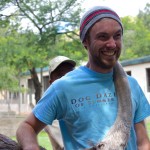 To my vegan family, I apologize for the next bit. Following the feeding, we were given the opportunity to go ostrich riding. I mounted the ostrich, grabbed its wings, and rode the ostrich around the pen. The jockeys were nearby to (attempt) to catch me when I fell off – falling off is the only way to actually get off the ostrich. I found the experience to be a blast and couldn’t stop laughing.

Nick, on the other hand, was less than thrilled…Check out his reaction here:

We then went for a “neck massage.” I held a bucket of food and six ostriches came to eat it from every angle over my head. They kept throwing pelts down my shirt! 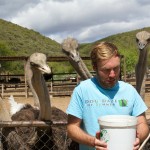 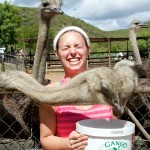 All in all, our tour at Cango Ostrich Farm was very informative. It was long enough where you appreciate the ostriches, yet short enough that you don’t get sick of them. People pretty much take the tour to be able to ride an ostrich. At the end of the tour, we sat at the restaurant on the farm and ate a fantastic array of ostrich for a very reasonable price.