David and I decided that before we left Israel it was necessary to do an all-encompassing tour of Jerusalem. We were up early to go to Temple Mount, waited in line, and were subsequently turned away an hour later as it was closed for the day due to riots. From there, we walked to the City of David and peeked through a fence to look at an excavation center. It was fascinating to learn that so much of Jerusalem is still underground but inaccessible due to the houses that had been built over the years. This excavation area was originally a house that was bombed by terrorists. After the attack, the Israeli government burned it to the ground and the plot has since become an excavation site. We admired some of the ruins and learned that above the ruins is said to be the remnants of the palace of King David. 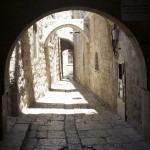 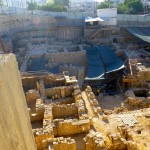 We then went down to Kidron Valley, which has the richest concentration of tombs on the eastern side of the Old City of Jerusalem; it separates Temple Mount from the Mount of Olives. We stopped beside Absalom’s Pillar (the Tomb of Absalom, King David’s son), which was constructed in 1 AD. It is customary amongst Jews, Christians, and Muslims alike to throw stones at the monument. It is said that residents of Jerusalem would bring their kids to this site when they misbehaved to teach them what became of a child who disobeyed his parents, since Absalom had disobeyed his father which resulted in his death.

During his lifetime Absalom had taken a pillar and erected it in the King’s Valley as a monument to himself, for he thought, “I have no son to carry on the memory of my name.” He named the pillar after himself, and it is called Absalom’s Monument to this day (2 Samuel 18:18). 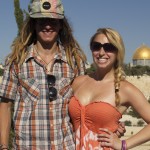 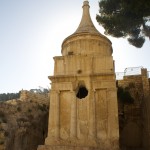 From Kidron Valley we went to the Jewish Cemetery on the Mount of Olives. It was very simply laid outside the city walls, as tombs were never inside the walls of the city. On the Mount of Olives there is a small lookout that gives a great view of Temple Mount and the Old City.

We then went down to the Garden of Gethsemane and the Church of All Nations, located at the foot of the Mount of Olives. This site is most famously known as the place where, according to the gospels, Jesus prayed and His disciples slept the night before Jesus’ crucifixion; it is said to be the place where Judas betrayed Jesus with a kiss. The Garden faces the Golden Gate, the sealed gate through which it is believed that Jesus will walk through upon His return. 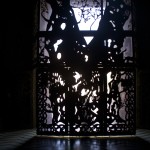 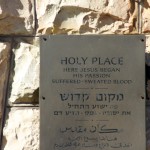 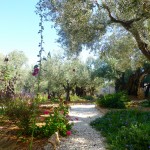 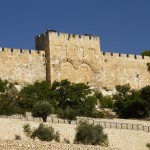 We continued to the Tomb of the Virgin Mary in the Kidron Valley and descended down the dim-lit stairs. It is believed by Eastern Orthodox Christians to be the burial site of Mary (Jesus’ mother). The church is divided by three Christian sects – Orthodox, Catholic, and Armenian – and they were each praying in their own expressive ways. It was quite interesting, overwhelming, and a bit strange to view the religious rituals of three different sects of Christianity occurring at the same time. There was chanting, incense, singing, spoken prayer, silent prayer, low-lighting, and three huddled (albeit separate) groups. 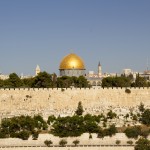 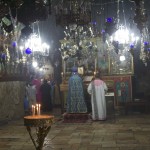 We entered back into the Old City through the Lions’ Gate in the Muslim Quarter and entered the Pools of Bethesda, which is historically known as a place of healing. It is said that Jesus performed two miracles in Jerusalem: he cured a cripple and a blind man. It was at Bethesda that Jesus cured the cripple, a man who couldn’t walk for 38 years. 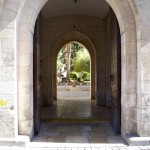 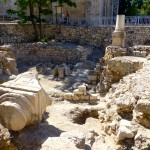 We quickly stopped in St. Anne’s Church, located at the start of Via Dolorosa, which is considered by many to be the birthplace of Mary, Jesus’ mother. This church is said to have amazing acoustics; too bad I can’t sing.