Well, it’s official: I’m an NYU Alumna. It’s a strange sensation – I checked out of school about a year ago (prior to South America), graduated early, celebrated the end of college by ringing in the New Year on Copacabana, and received my diploma in the mail back in February. Walking for graduation wasn’t something to which I was looking forward. In fact, it was only for my parents, grandparents, and great-grandparents that I walked in the first place. In the end, I sure am happy that they convinced me to walk.

On Monday, May 19th, I attended the Steinhardt Graduation at Radio City Music Hall – quite a place to walk! I was worried that I wouldn’t know anyone and would find myself sitting alone, but fortunately I found a group of lovely ladies amongst the sea of purple gowns. At the sound of pomp and circumstance, I realized that this was real, that my NYU chapter was finally closing. It was surreal. To be sitting in the front row of Radio City and hear my name called as I walked around the stage solidified the end of college: I did it. 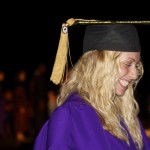 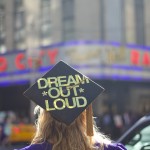 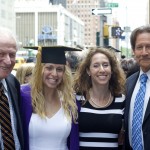 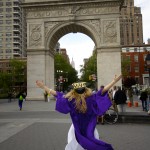 The following day, the Empire State Building was lit up in purple to honor the NYU grads. I’d seen it for the past few years, and yet this year it was special, this year the city of New York was congratulating me. We all went down to the Brooklyn Bridge Promenade to get a shot of the NYC Skyline with the Empire State Building all lit up; it was beautiful and moving all the same.