We had originally planned only to make one more stop en route back to Colombo, but when we found the Mosvold Villa Properties, we extended our stay on the Southern Sri Lankan coast a bit longer.

Our first stop was at We Escape in Weligama. It’s considered a “poshtel” (where posh meets a hostel) within a colonial house. Unlike the other places in which we stayed on the coast, We Escape caters to both budget and luxury travelers alike, as they offer dorm rooms for $15 as well as private rooms in a separate building for a greater price. 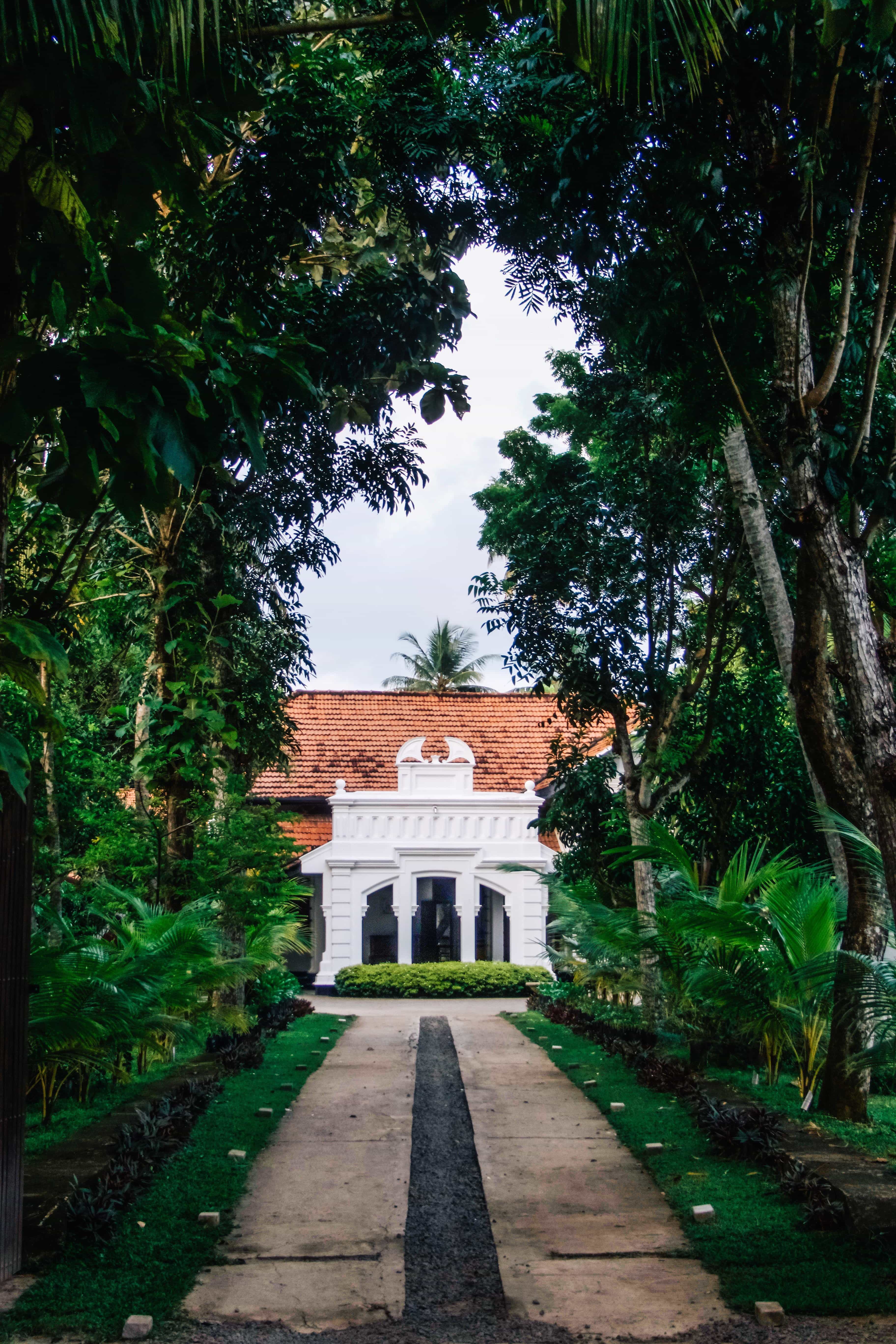 The room with en-suite bathroom was simple but clean, comfortable, and quiet. We Escape has a surfy feel to it, as this area is known for its waves, and a wide open courtyard and adjacent infinity pool. All meals are served outside, with there being nightly theme nights too. 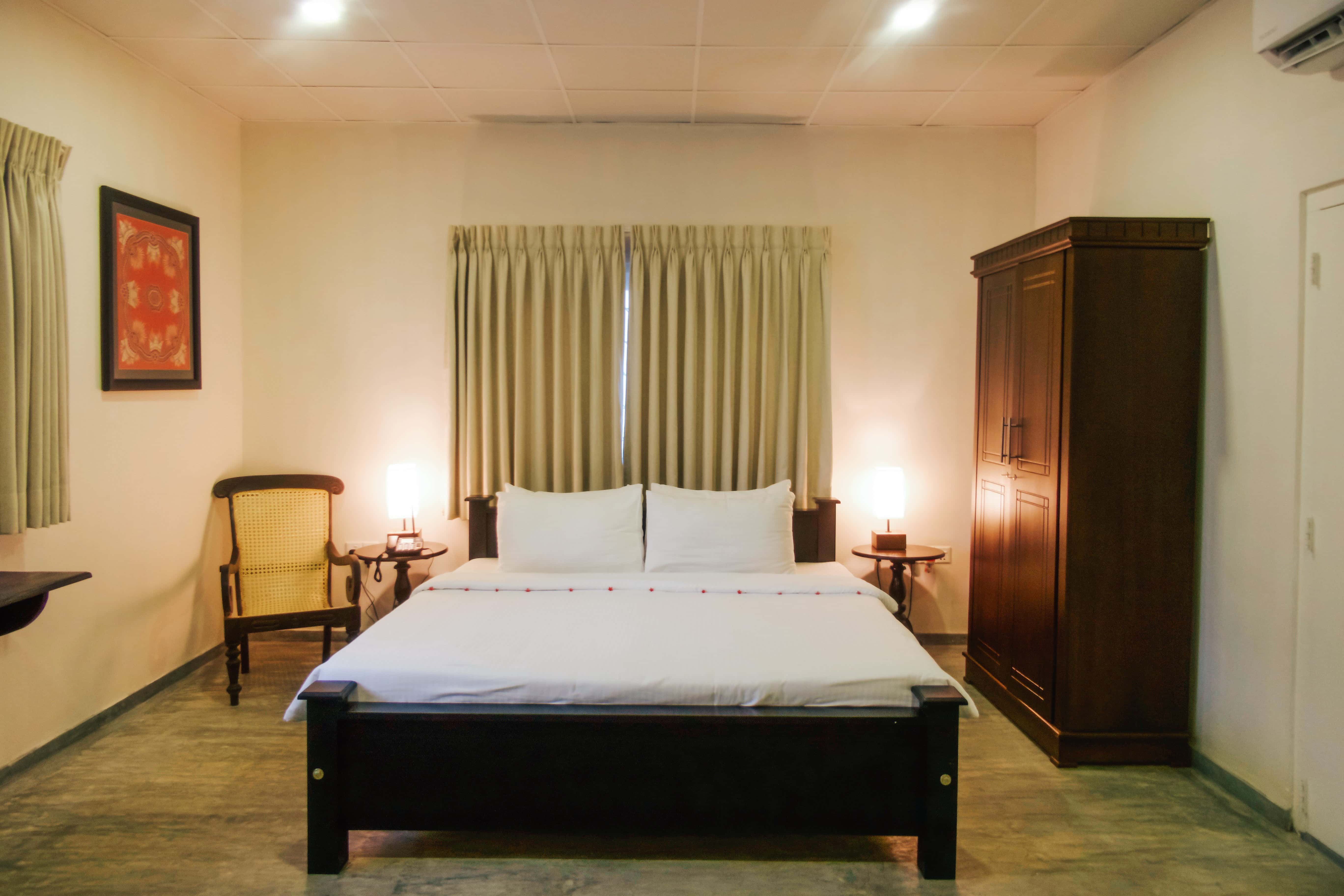 Nearby We Escape is Mirissa, from which every whale watching tour leaves. At first I wasn’t planning on going whale watching, but then I realized that it was blue whale watching – the largest mammals on the planet! Well, I couldn’t miss out on that. So my driver helped me arrange a whale watching tour with Geeth for the following morning. The ocean was quite rough, but thankfully I enjoyed the choppy water and was not one of the many seasick below. It takes about two hours to get out to the blue whales and two hours back, so prepare yourself for a long day. I used the time to plug into my music and relax to the lulling movement of the boat. When we finally saw the blue whales, we didn’t see them breach sadly, but we saw it’s back and tail two or three times. Geeth was very very attentive and ensured that we all saw the whales. 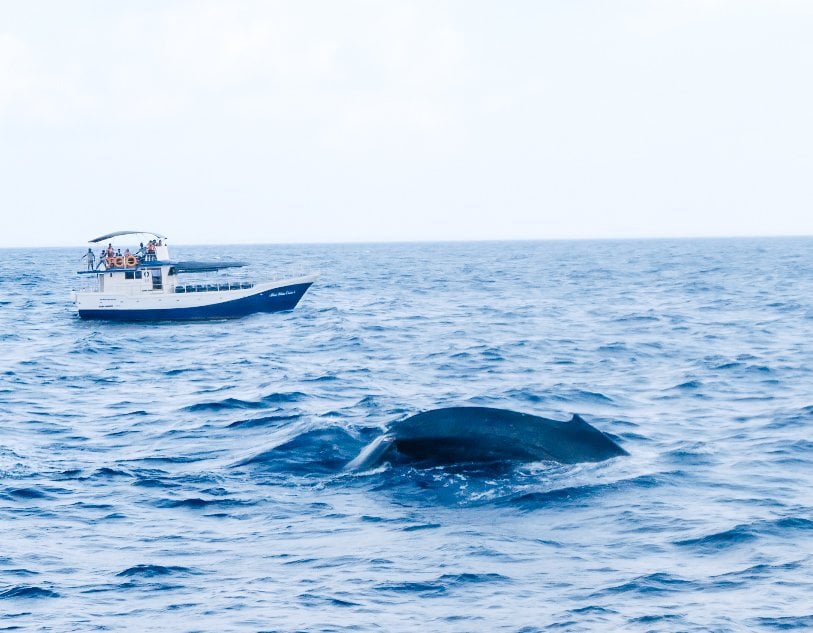 Since I felt a bit salty, I quickly rinsed off before we drove to Mosvold Villa for the night. Mosvold Villa is in an absolutely spectacular location, situated right on Pebble Beach with the famous stilt fishermen visible from the property. The staff was extremely attentive from the moment we arrived until the moment we left. On arrival we were given a fresh coconut while taking in the views overlooking the beach. 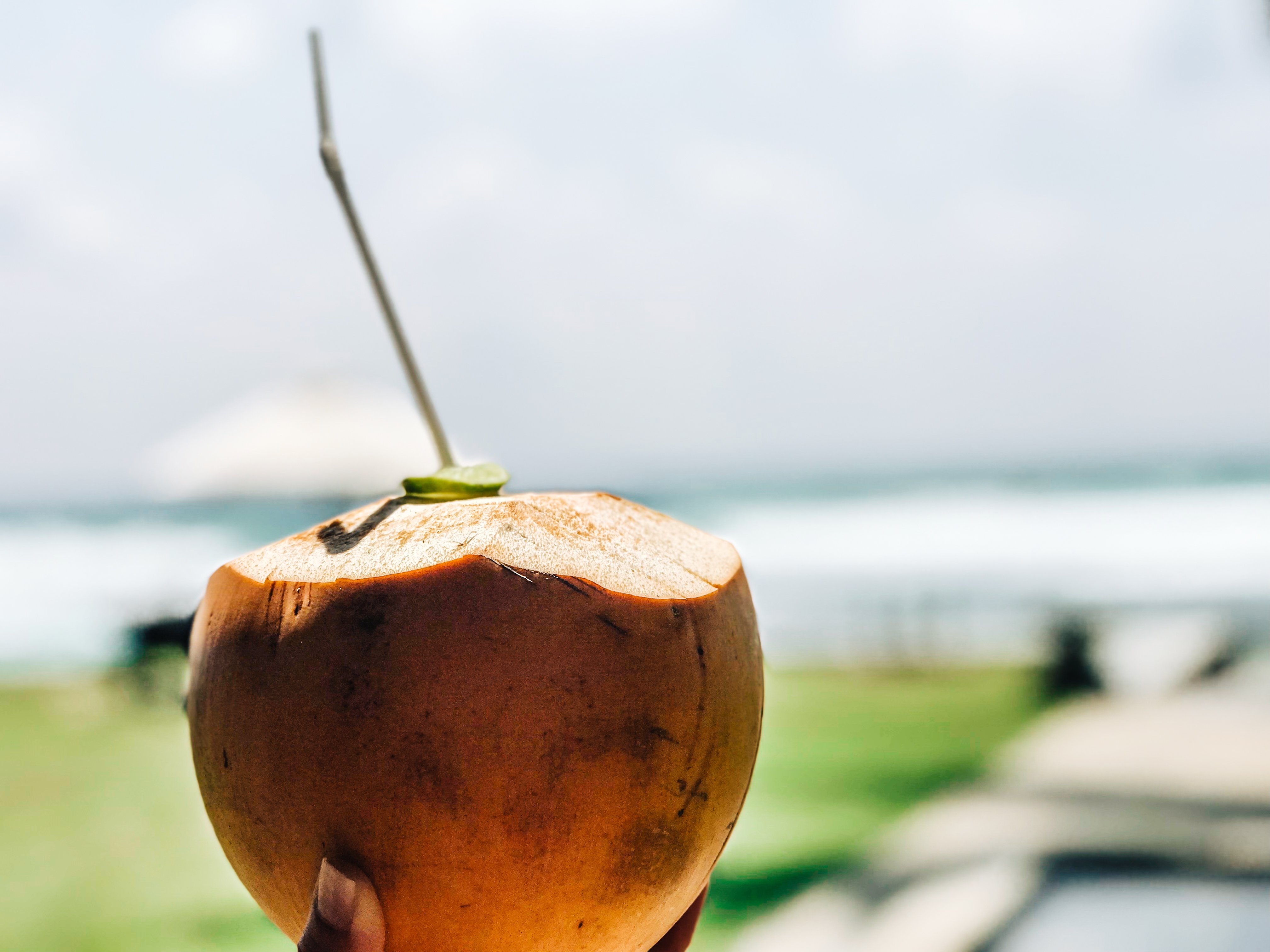 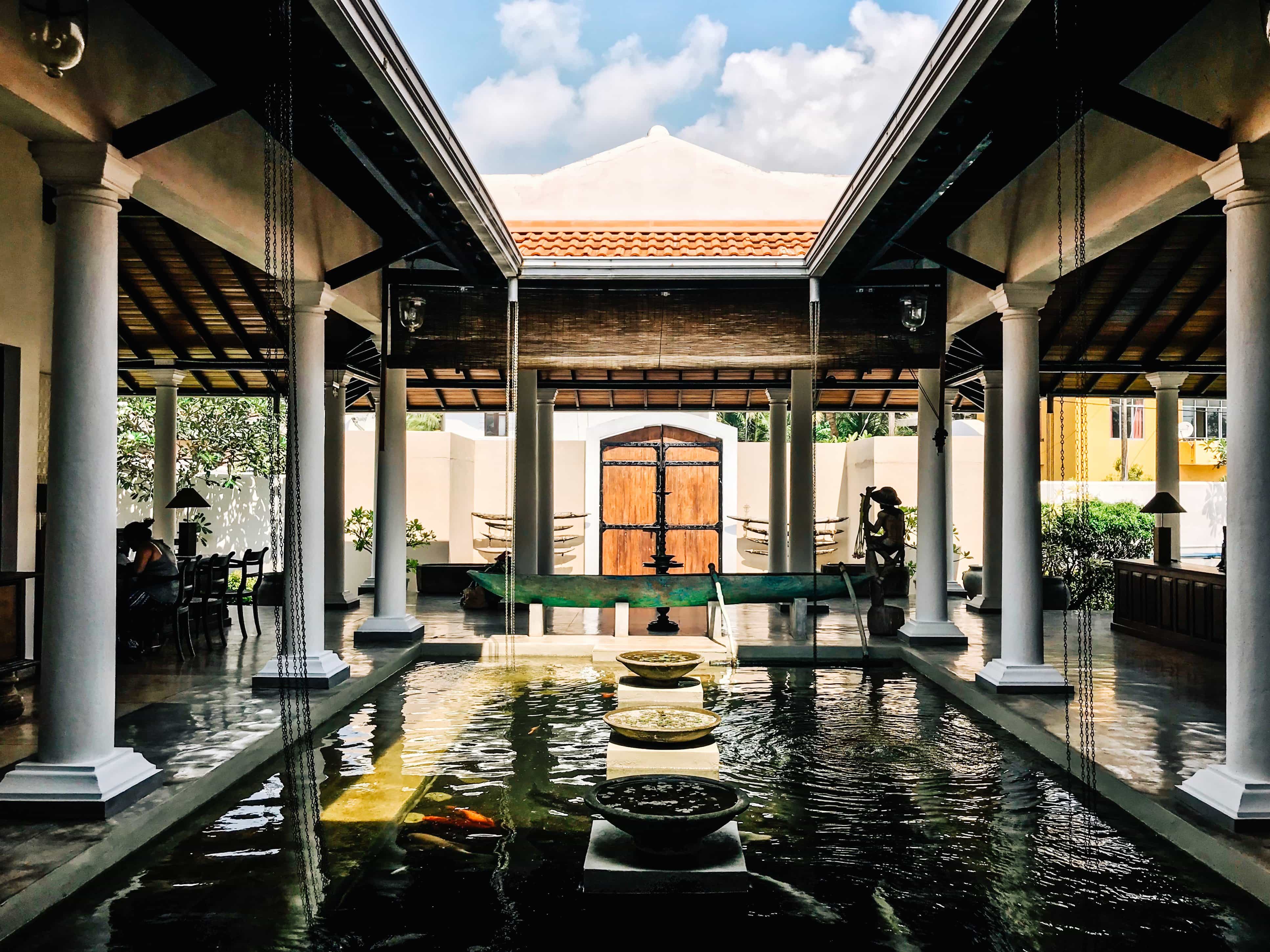 After a quick check-in, we were taken to our Superior Room for the night and it was simply lovely. With a double bed, flat screen TV, table and chairs, and an en suite bathroom, we were quite comfortable. 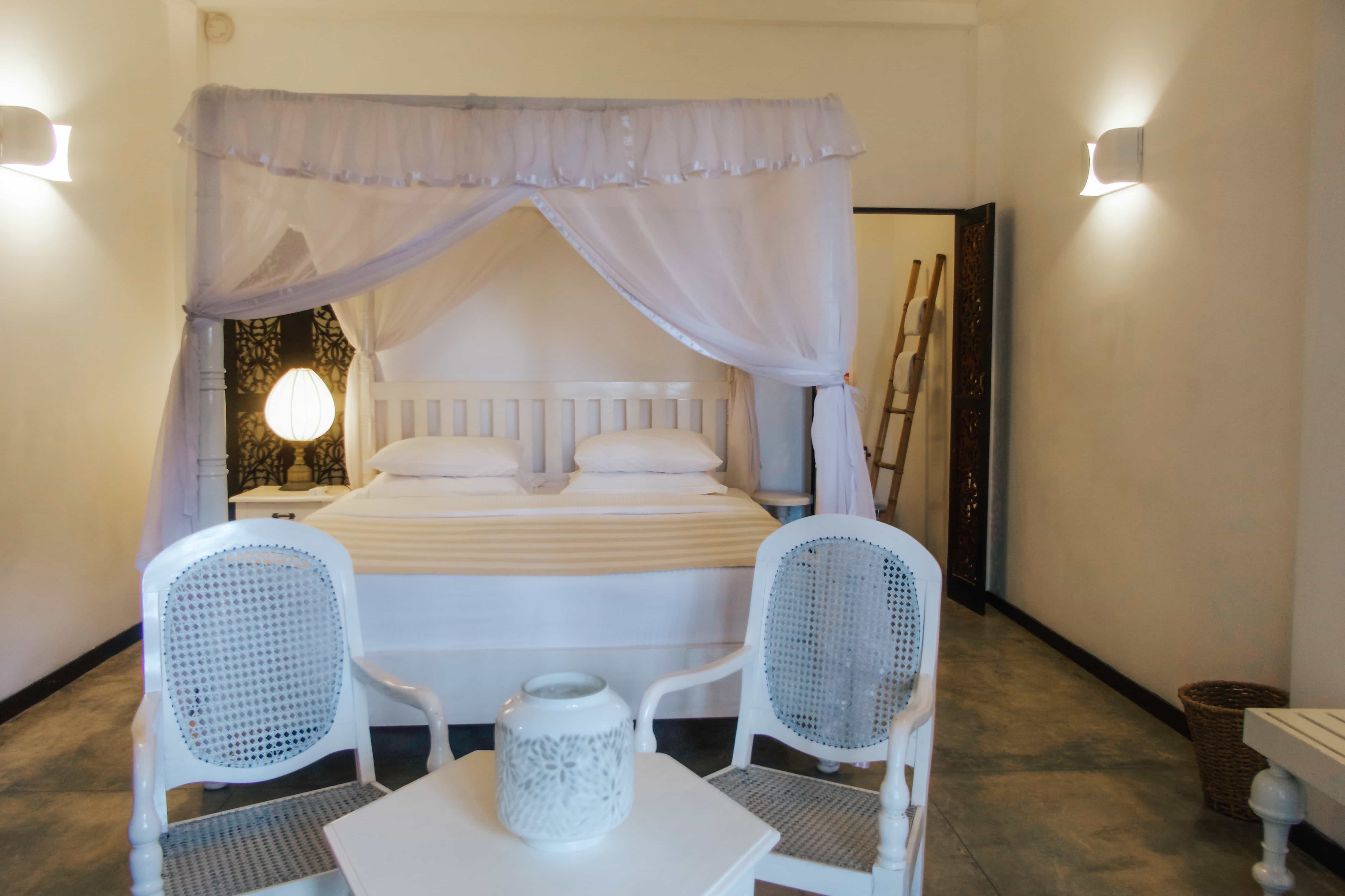 But at a place like this, you don’t really want to spend your time in the room, so we lounged by the infinity pool overlooking the beautiful beach below. 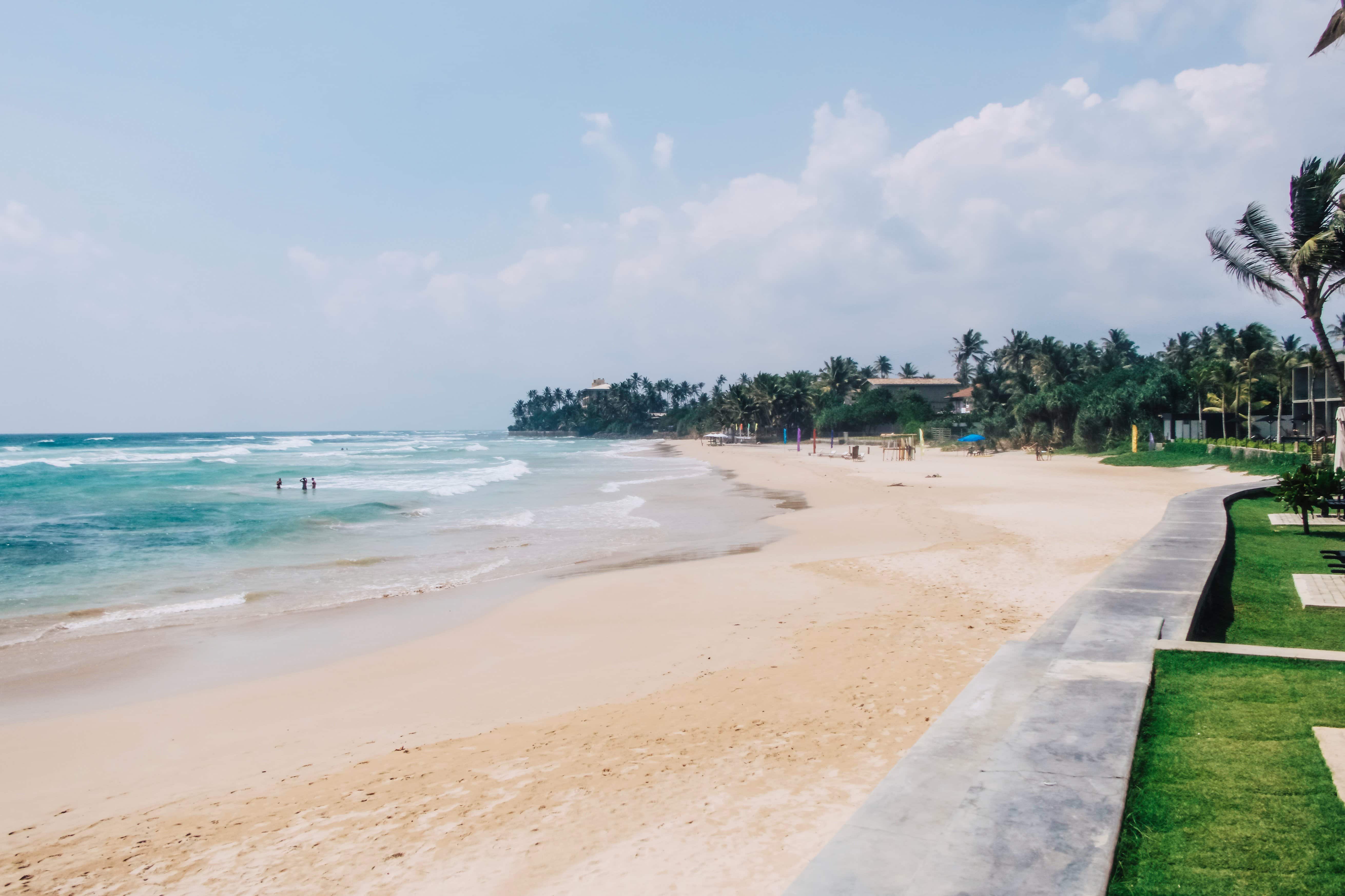 Just before sunset, we were treated to High Tea, which was absolutely delicious. 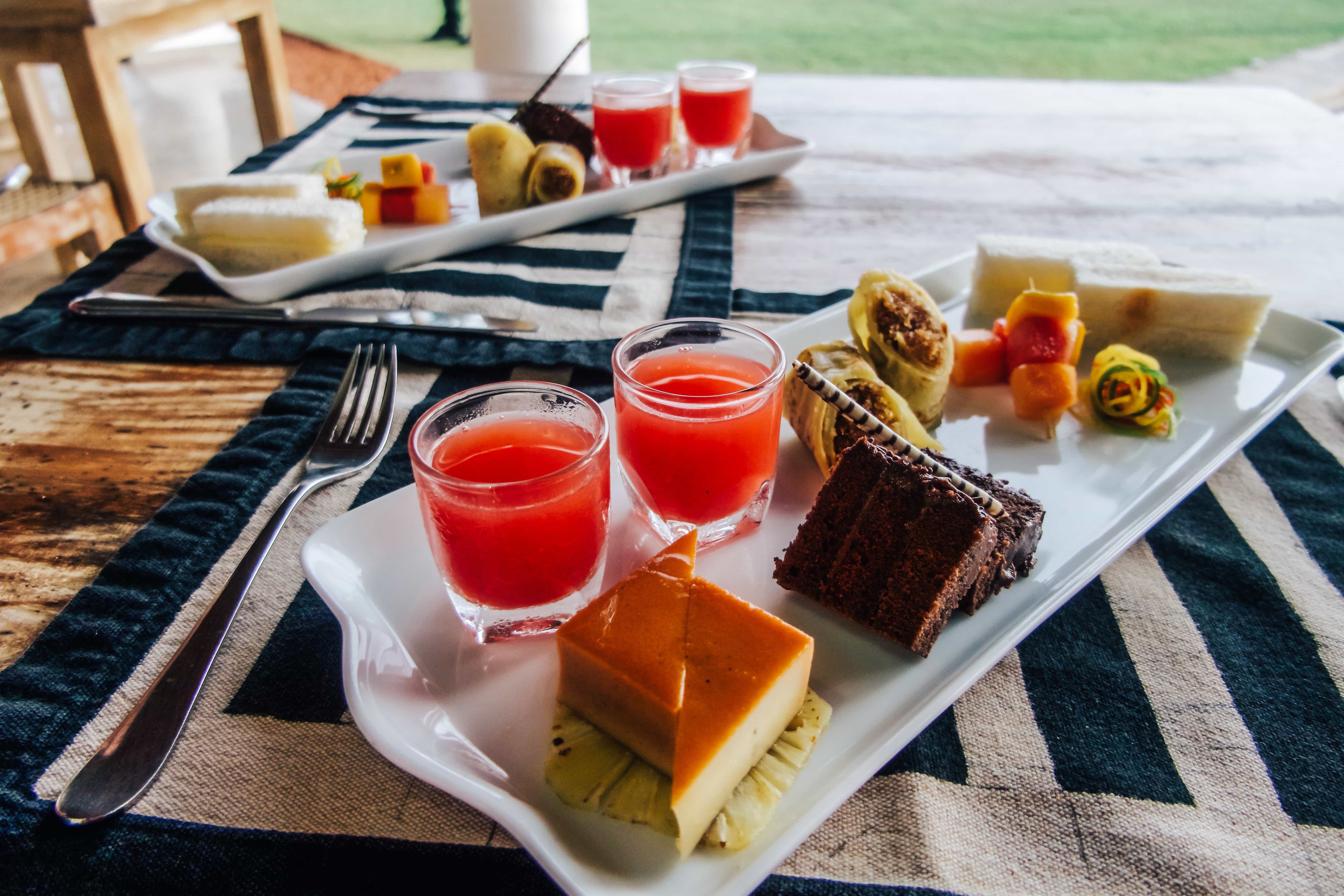 Sweets and treats and tea was just what we needed to give us a slight boost of energy before watching sunset from the beach below the property. 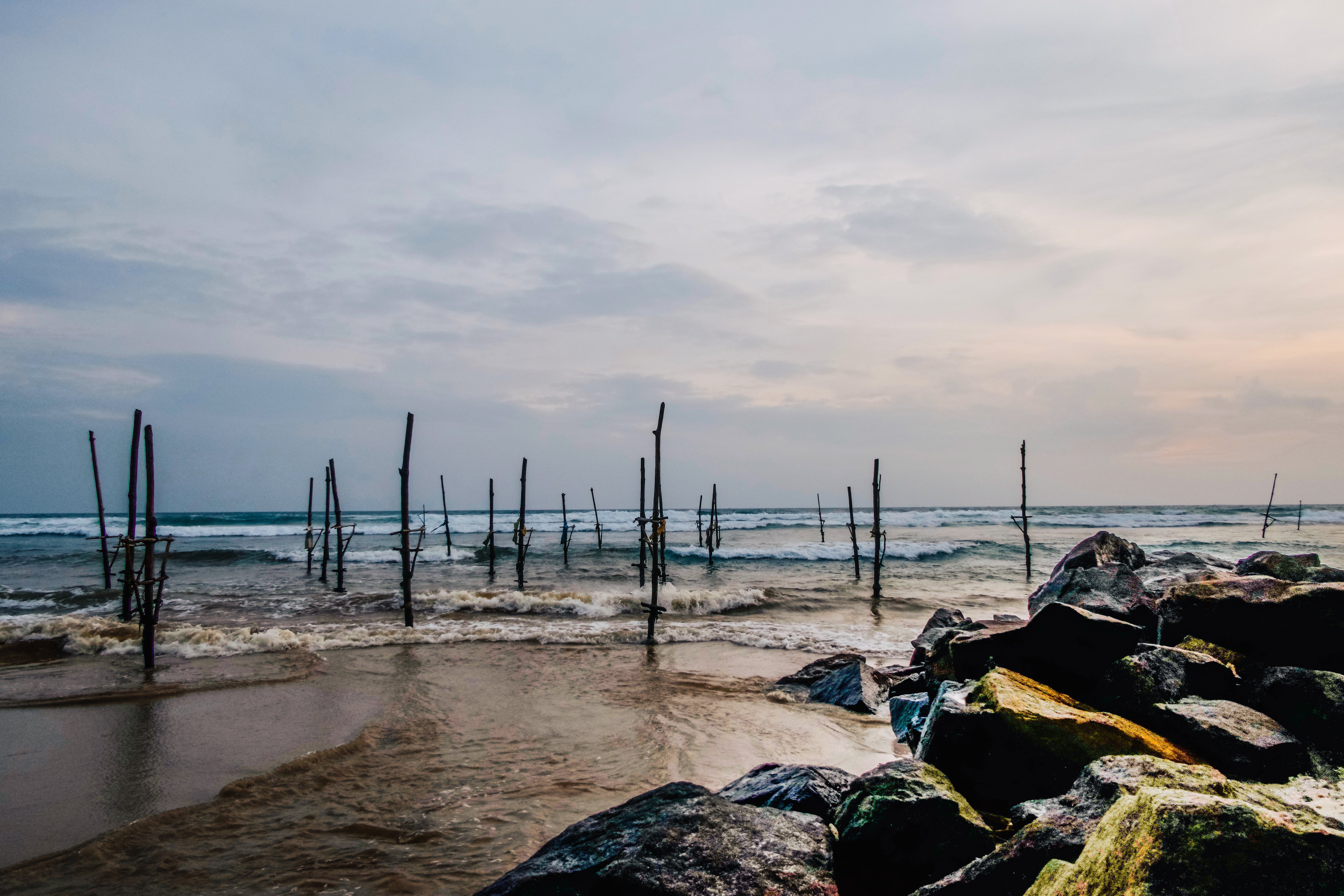 We were up early the following morning for sunrise and to hold a live webinar before making our way to Mosvold Villa’s third property: Amba Ayurveda. We had a reservation confirmed for us months prior, yet upon our arrival, we were met with the most confused of faces. Apparently our reservation was never made and there was no space in the hotel. The staff pulled themselves together though and invited us to spend the day there and were gracious in introducing us to the Ayurvedic Treatment. 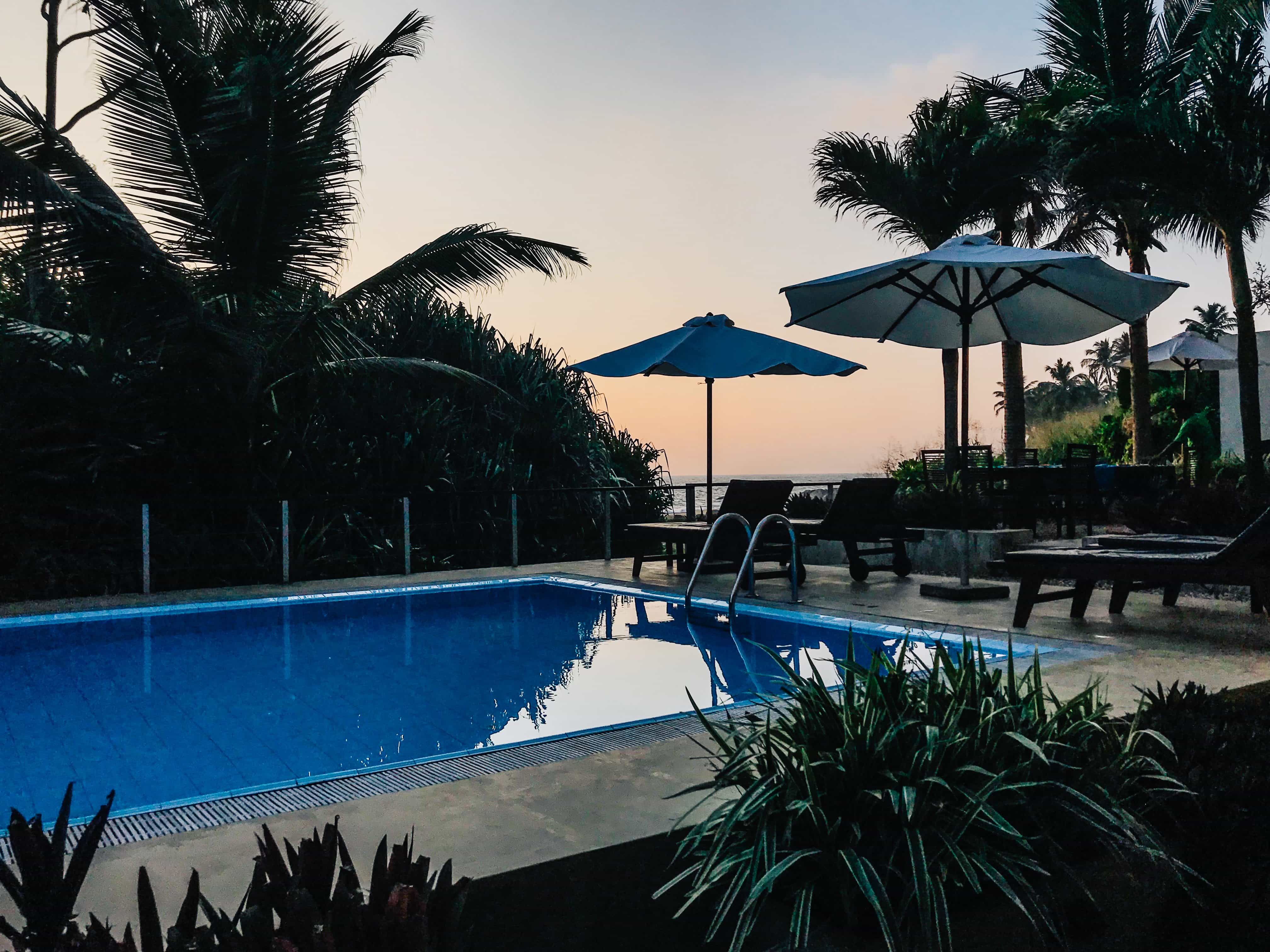 We met with their doctor on site who determined our ailments via pulse and ordered specific treatments for each of us. I was given a lovely 30 minute full-body massage; it was the most symmetrical massage I have ever had, as there were two people massaging me in unison. After the massage, we drank some tea and had a lite, healthy dinner before taking off to find a place to sleep for the night. 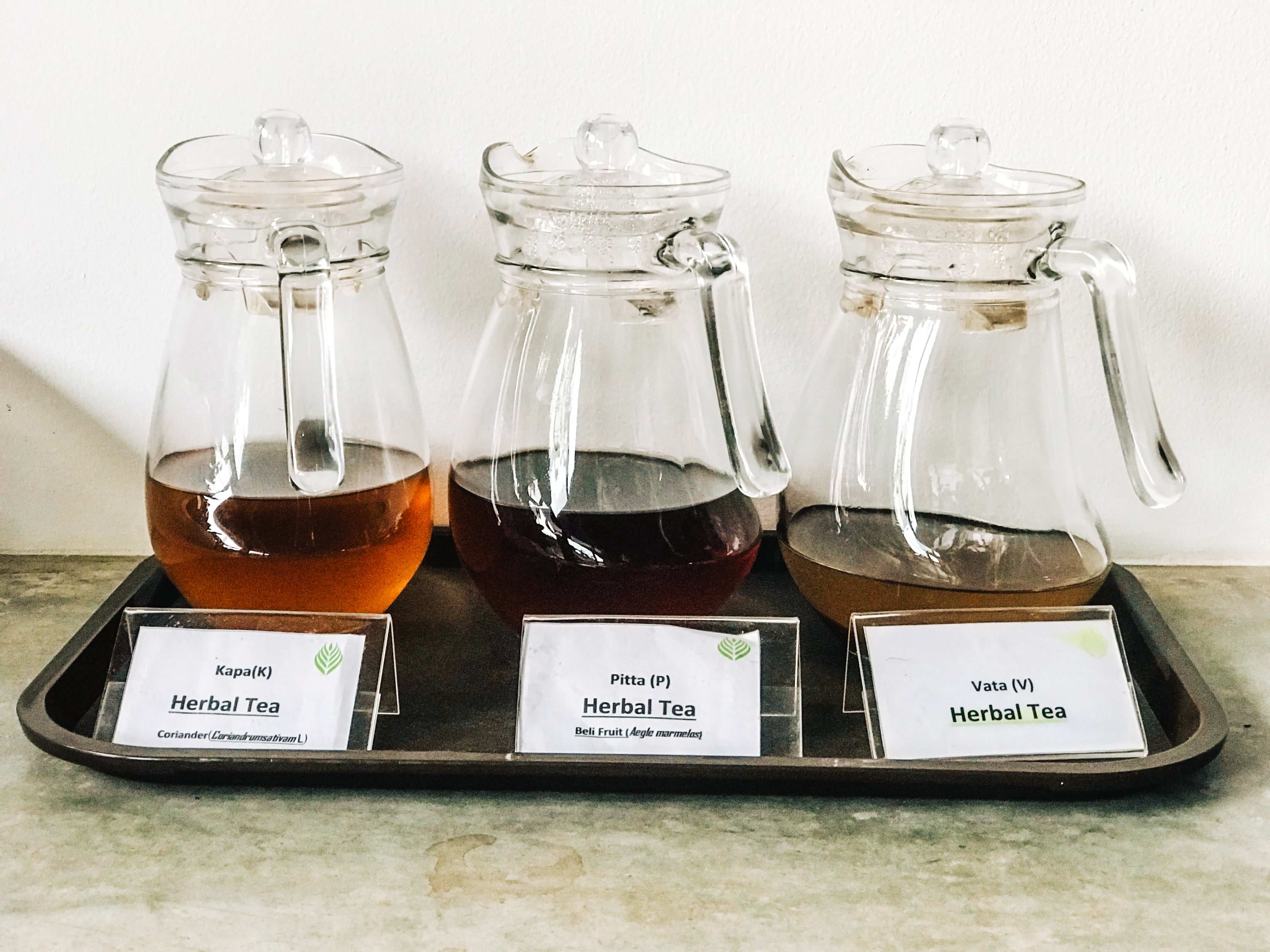 The Mosvold Villa Properties are absolutely lovely, and I would love to spend more time there in the future. My one piece of advice is ensuring that your reservation is truly confirmed so that you don’t end up without a place to sleep us. To their defense, they offered for us to backtrack an hour to Mosvold Villa to spend the night there and I would’ve loved to spend another night there; that did not, however, work with our schedule as we had an early departure for the airport the following morning and couldn’t afford to an another hour to the already-long drive.