Mostar: So Much More Than Just A Bridge

Bosnia & Herzegovina is not the destination that comes to everyone’s mind when they think of traveling to Europe. After having visited, I can’t seem to understand why, as the country was one of my favorites (and I’ve been to quite a few!). Mostar, of course, will steal a lot of the lime-light due to its magnificent bridge which stands tall as a UNESCO World Heritage Site. The entire country, however, has a wealth of history, including the recent civil war that has shaped this country full of beauty, friendly people, and great food. 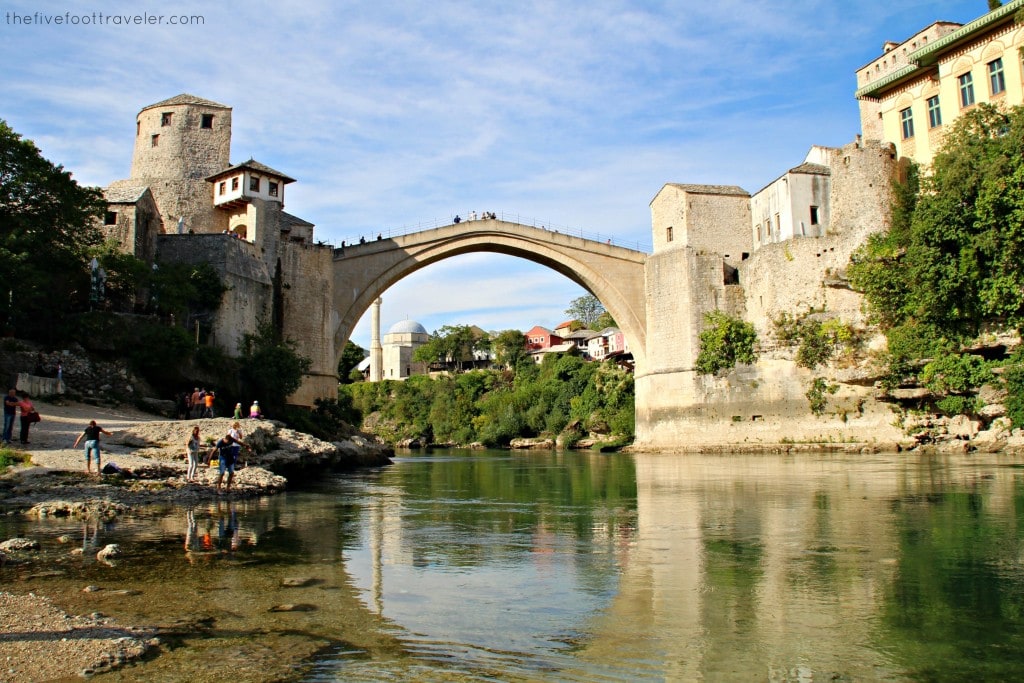 With our car rental from Croatia, we drove from Split to Blagaj in Bosnia and Herzegovina. We stopped in Blagaj to visit the Dervish Monastery, built around 1520 with hints of Ottoman architecture. For two euro, we entered the monastery (barefoot and covered — remember, you’re in a Muslim country) to view the rooms of the monastery and prayer areas. It also offers a great birds-eye view of the spring of the Buna River. There are many cute restaurants surrounding both banks of the Buna, and a great view of the monastery itself across the river. 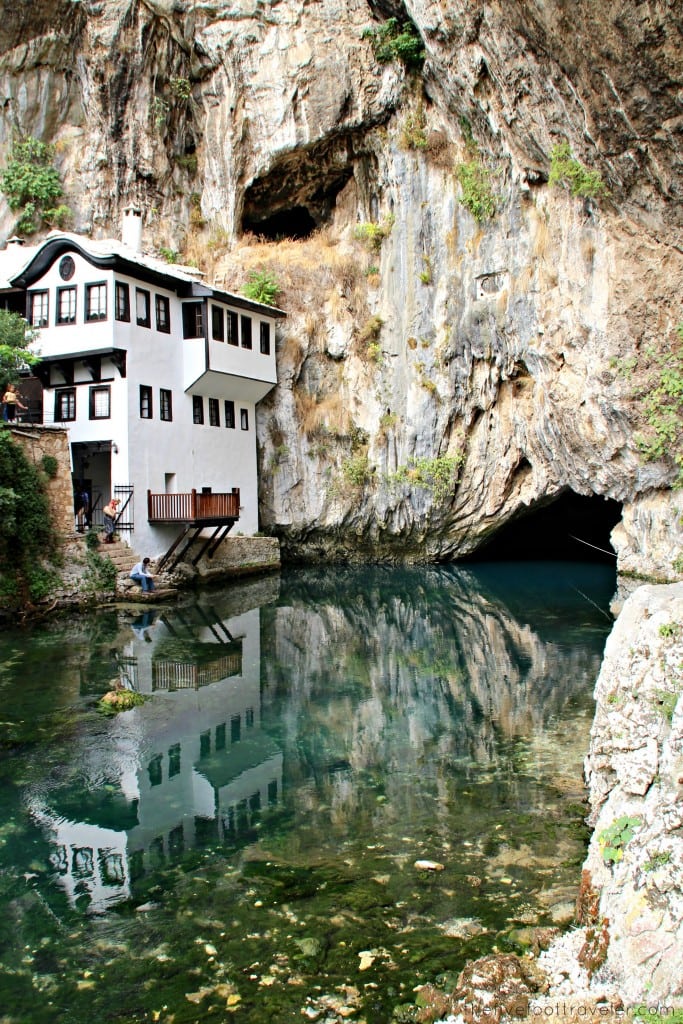 From Blagaj, we continued toward Mostar. We booked an adorable B&B, Pansion Rose, that offered free and secure parking, enclosed by large iron gates. Asima, the owner, showed us our room and made us feel right at home. The entire building has a relatively small number of rooms; they are cozy and well decorated, with clean bathrooms. The rooms all have air-conditioning, satellite TV, and free WIFI. Pansion Rose is conveniently located in Mostar. 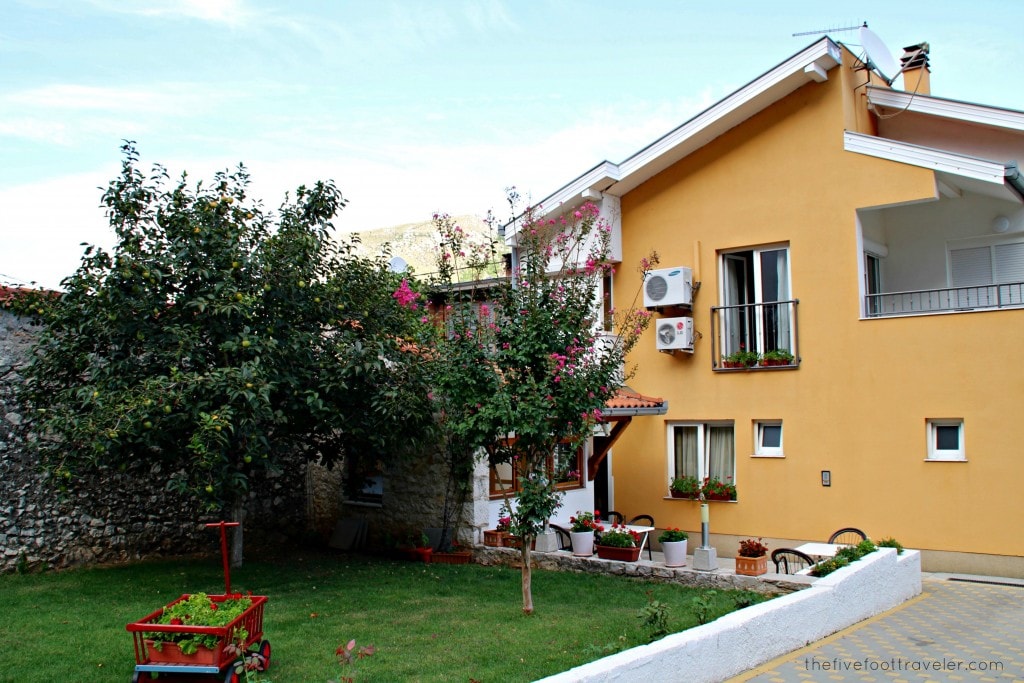 You are approximately 10-15 minutes easy walking distance (1km) from the very center where the iconic Old Bridge of Mostar is found. During the War, the Old Bridge was damaged, and, on November 9. 1993, it was completely destroyed by shelling and collapsed. It was reconstructed under the patronage of UNESCO in September of 1997. 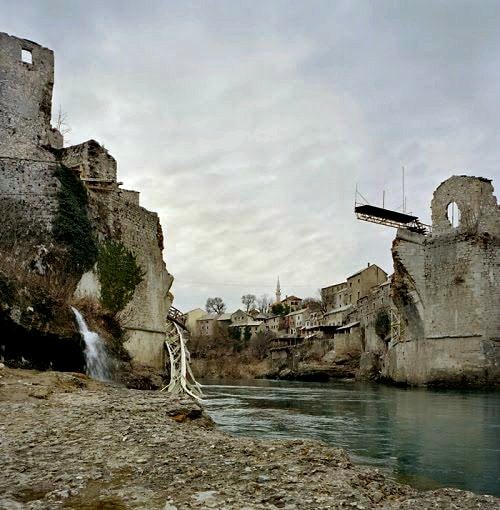 En-route to the Stari Most Old Bridge, built by the Ottomans in the 1556, you will come across a newer bridge looking towards the Old Bridge. From here, you will have the opportunity to compose some great photographs, while everyone else crowds on or around the Old Bridge itself. 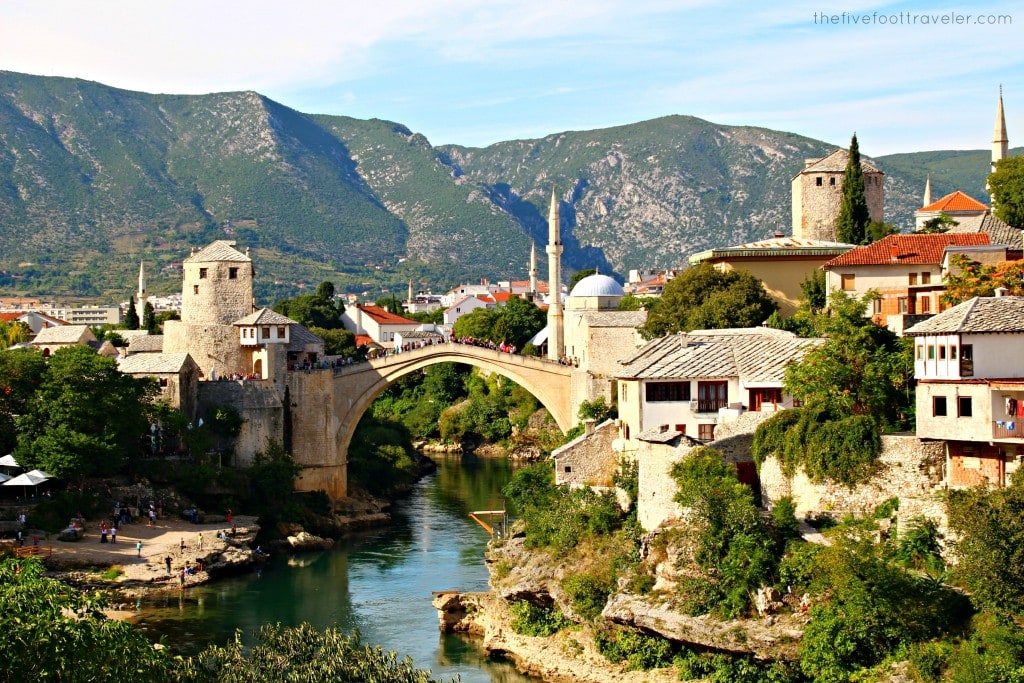 You might even get lucky and get to see someone famously dive from the bridge into the river below (unfortunately, we did not get to see this!). The street adjacent to Mostar's Old Bridge is also UNESCO for its antique structure and originality. 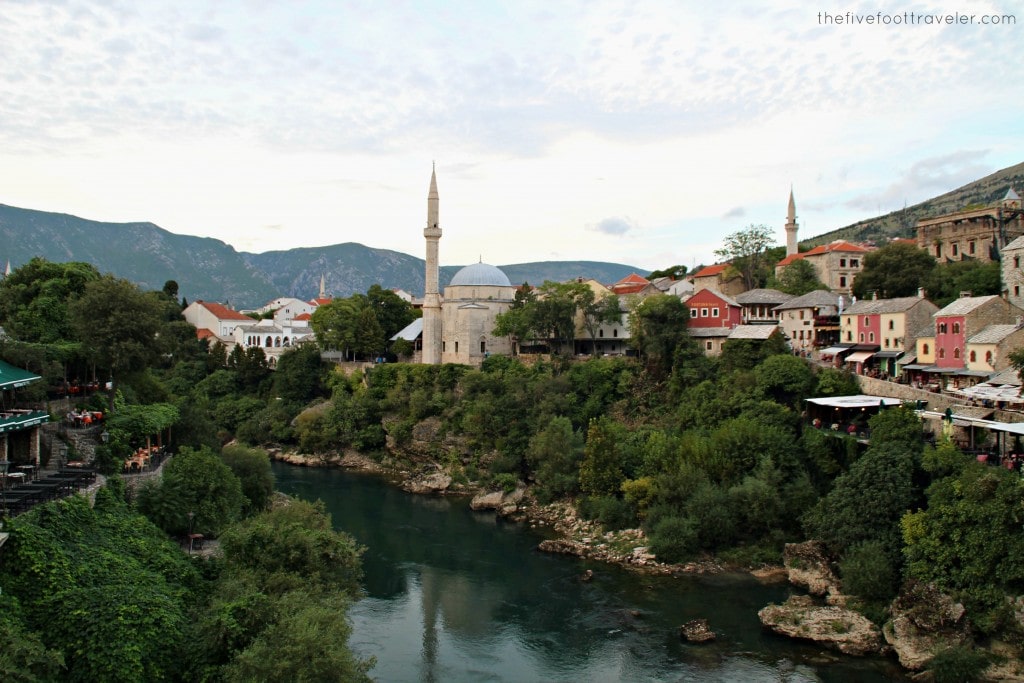 Quaint shops line the streets, but be warned, do your shopping early because they close mid-afternoon. The Kossi Mehmed Pasina Dzamija mosque is just up the street and arguably has the best views of the Old Town and the bridge from the minaret (you will pay the equivalent of 5 Euros for the view, if you want it that badly). 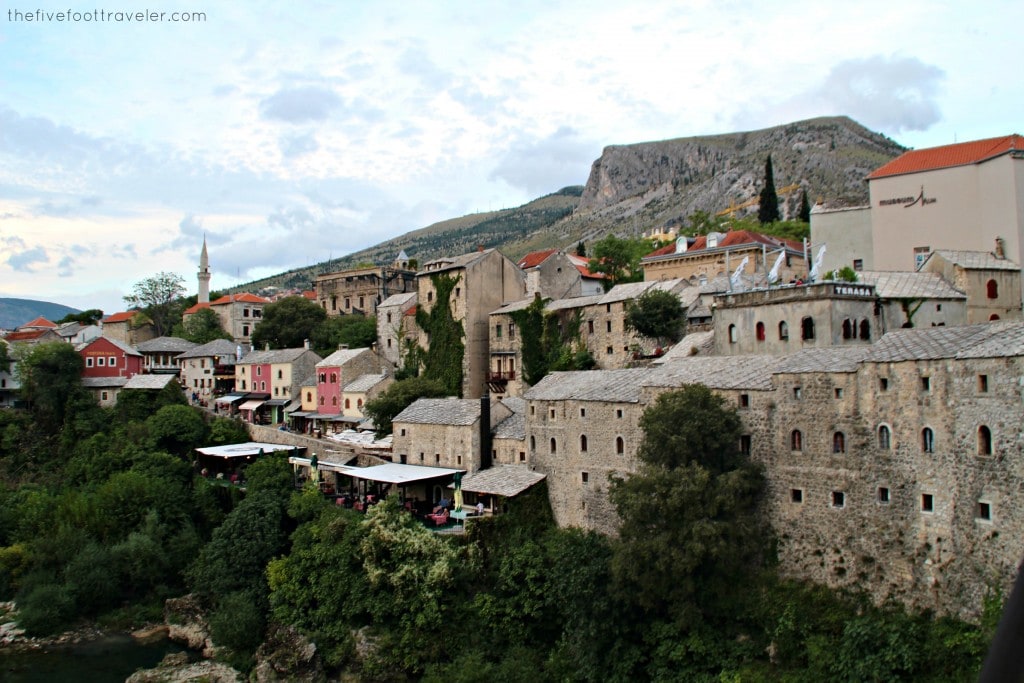 The other side of the bridge, where you would have originally come from, has many more shops and places to eat. In this area, you can find the Crooked Bridge, another little bridge that looks curiously similar to the main attraction of the Mostar. This bridge is listed as a UNESCO and was also used during Ottoman rule for transportation and trade. 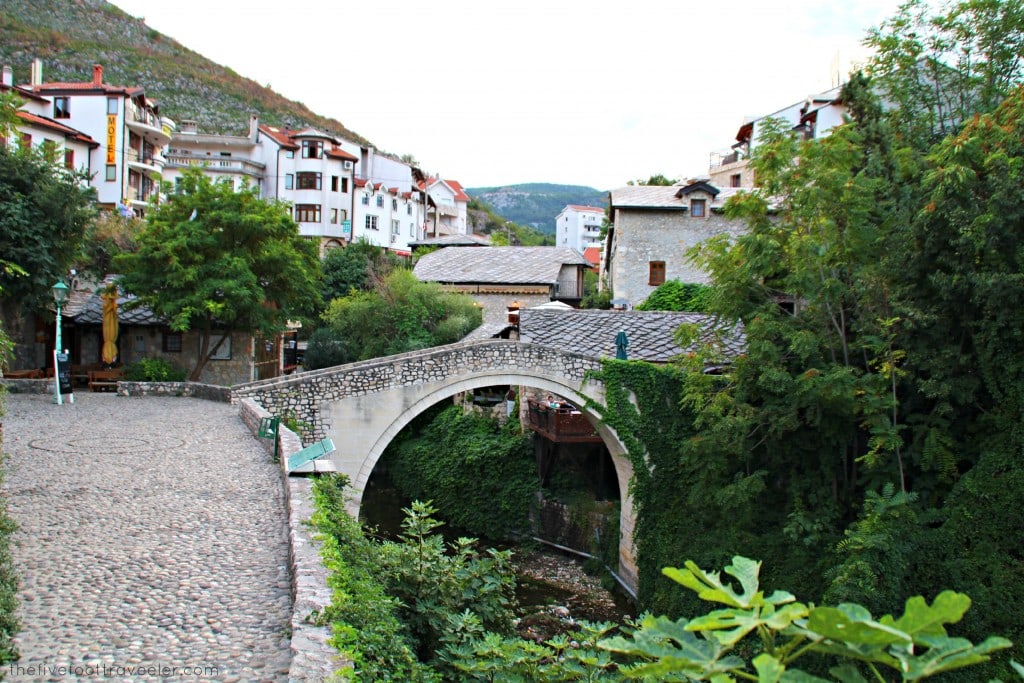 It is not until you leave the Old Town though where you will see the visible remnants of the war in Mostar. Walking around, if you pay close attention, you will notice many buildings clearly marked with bullet holes. 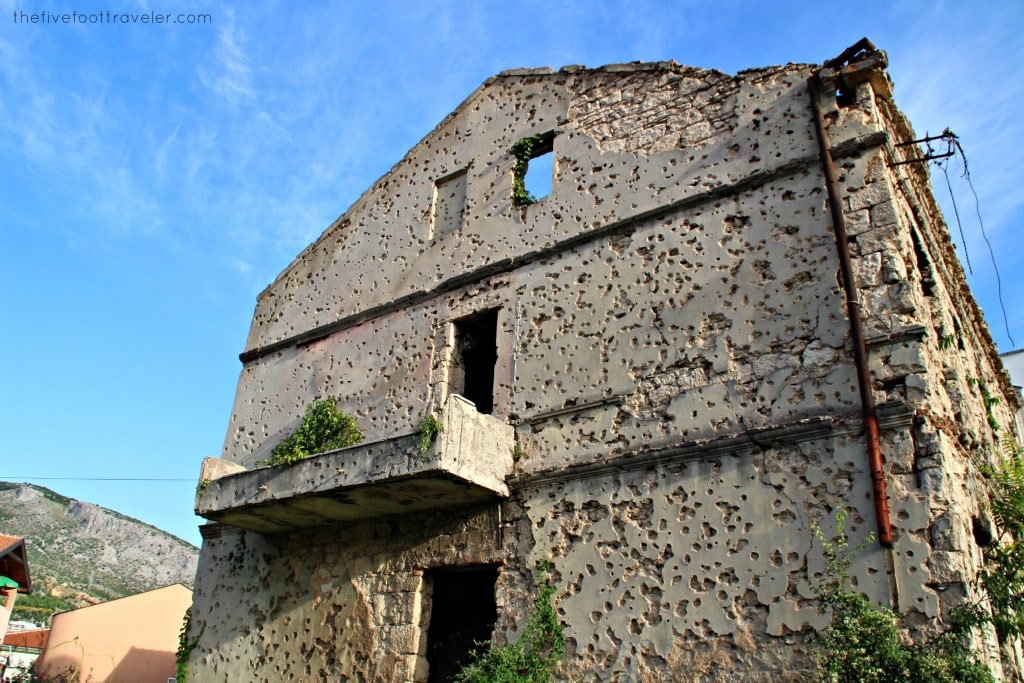 Some houses look as though they had been sprayed with gun fire the day before, while others are completely unscathed. 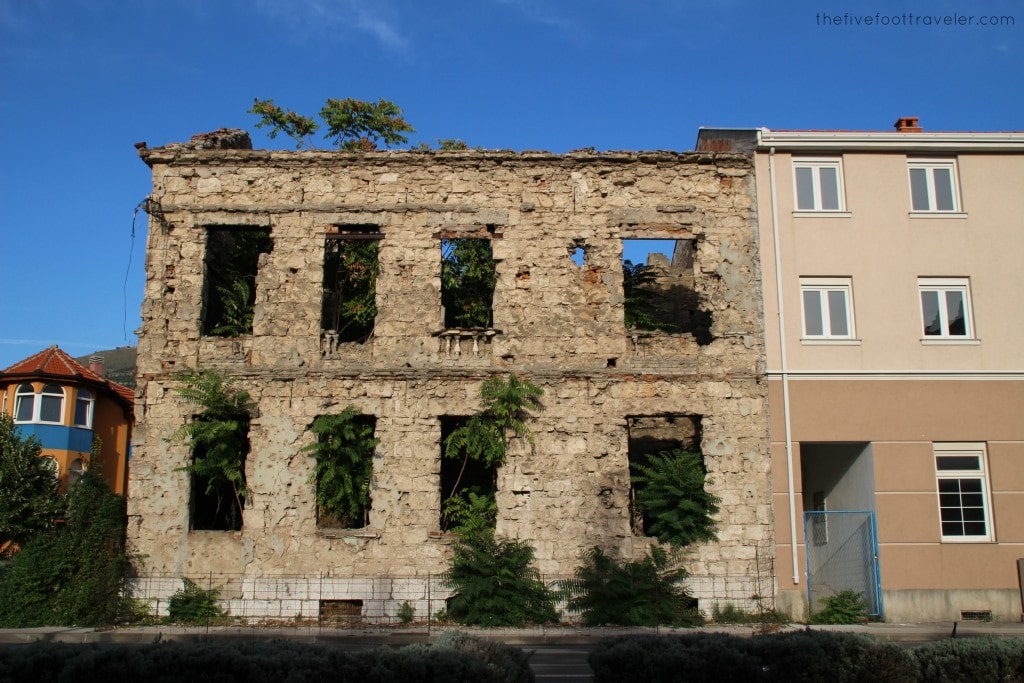 Still, other buildings go beyond the damage of bullet holes and are completely bombed out. 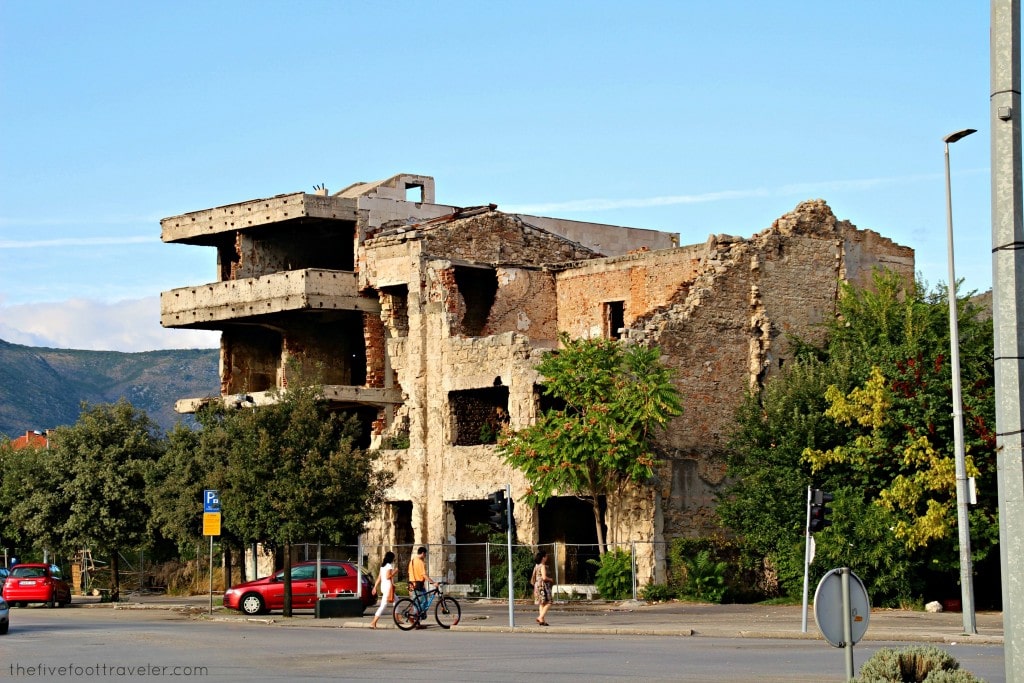 The more interesting buildings will have graffiti, each piece of street art telling a story. When we went to explore Mostar's former Sniper Tower, originally a bank, we saw some of the most interesting graffiti. One of the most chilling that I saw was, “All my friends are dead.” 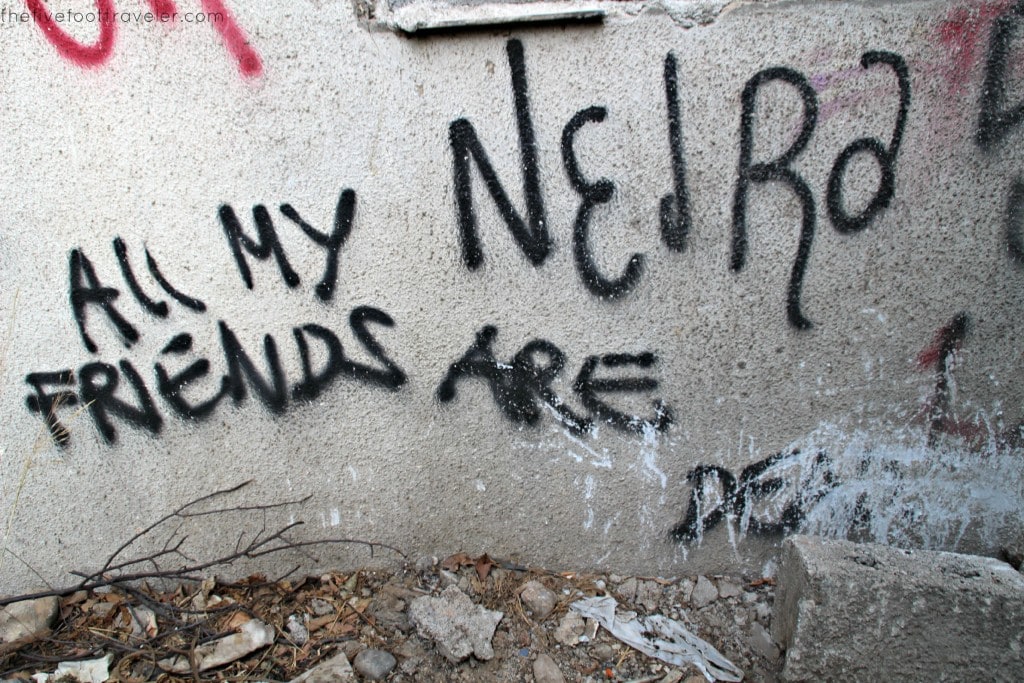 Another was an image of sunglasses, each with a different reflection, begging the question, “What do you see?” Do you see death and despair, or do you pretend that all is fine and dandy? Pick your glasses. 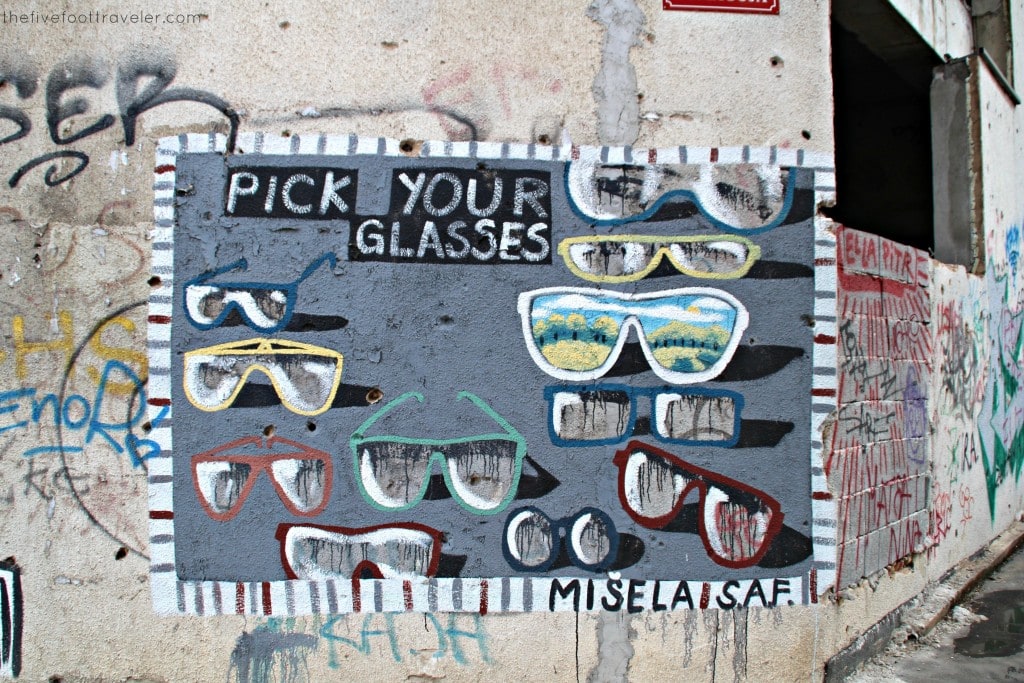 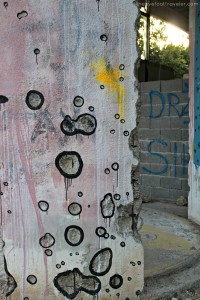 Nelson Mandela quote in the back of the building), but we decided not to further explore the building as it was getting late. Other taggings read, “I see you, do you see me?” and, “We are all living under the same sky.” Even further, people outlined missiles going through soldiers’ heads, and painted around the bullet holes to give them emphasis.

It was an extremely sobering experience, and one in which everyone should have to serve as a reminder of what did happen, and what could happen anywhere. 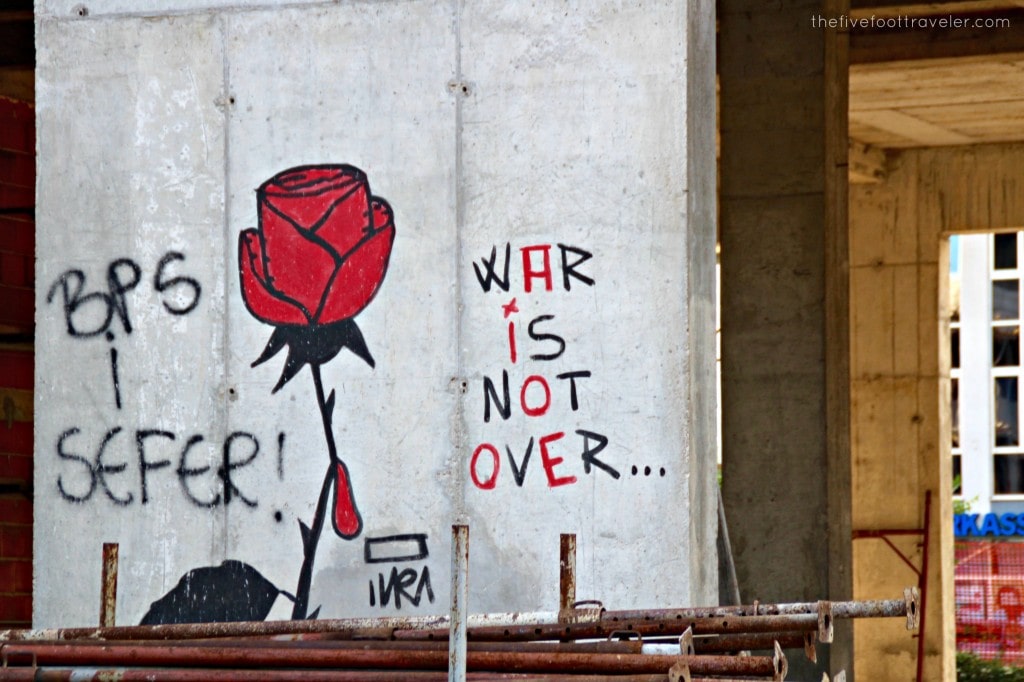 After spending some time looking through all of the graffiti, and seeing the bullet holes on peoples’ actual homes, we were thoroughly drained and walked back to the Mostar's Old Town to witness one of the most beautiful sunsets I have ever seen — such a stark contrast with the darkness that once flooded the city! Here, we reflected on just how grateful we are to live where we do. 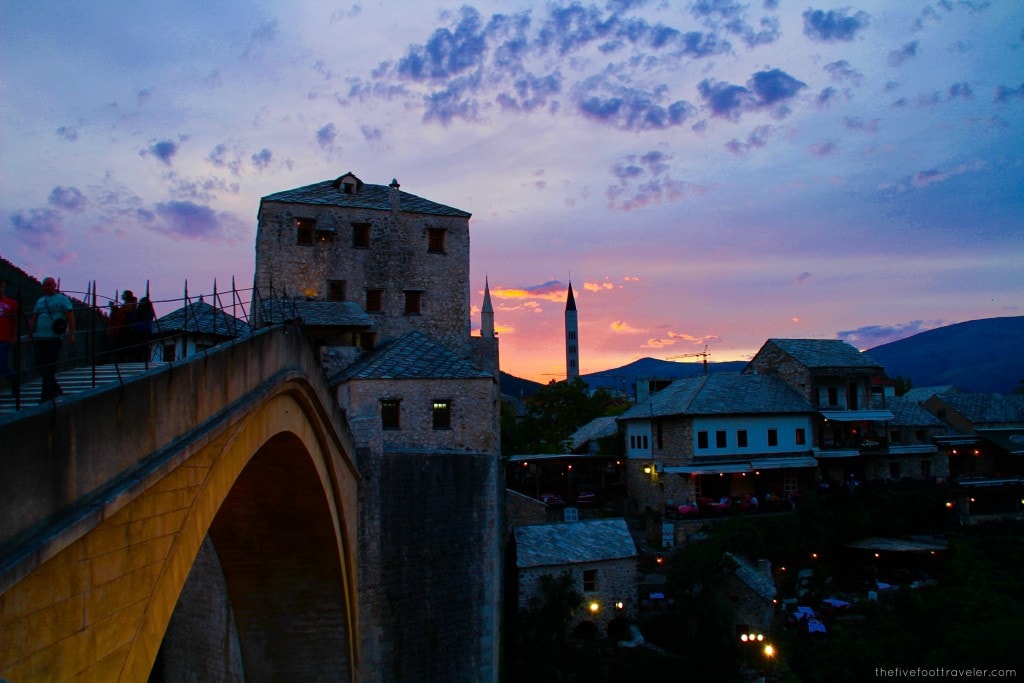 We had a delicious dinner of stuff zucchini, peppers, and onions in the Old Town, took some night shots of the Stari Most Old Bridge, and collapsed into our beds at Pansion Rose after an exhausting day.

**Special thanks to Asima and Pansion Rose for kindly offering me a complimentary stay. As always, all opinions are my own.