Marrakech in One Day

We tried our best to wake up in Riad Star with plenty of time to explore Marrakech before heading to Rabat en route to Tangier. Once up and packed, we went to the common area to find a fantastic breakfast of tea, eggs, yogurts, breads, cakes, and pastries. We set out to explore Marrakech in the light this time! 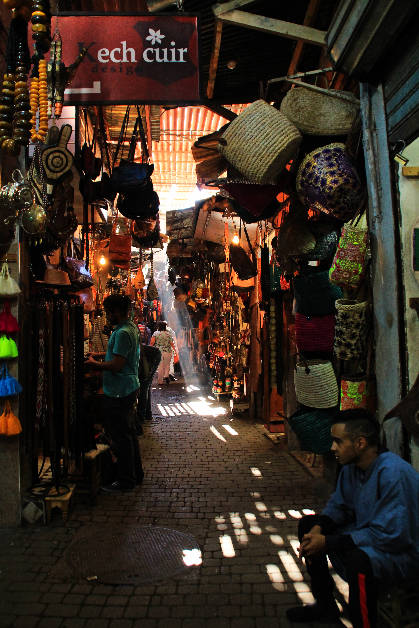 Our first stop was at the Ben Youssef Madrasa. A madrasa is a center of learning, typically associated with a school. In the case of the Ben Youssef, this madrasa serves as an Islamic college where students come to learn and study the Koran. This school was founded in the 14th century, rebuilt in the 16th century, closed in 1960, and restored/reopened as a historical site in 1982. The large tiled courtyard is absolutely beautiful, with a big pool that served for ablutions before entering the proper room that sits at the end of the courtyard. Surrounding the courtyard, on the upper levels, were 130 minuscule bedrooms that housed the students; they were so small that there was barely enough room to lay a mat and set a chair! 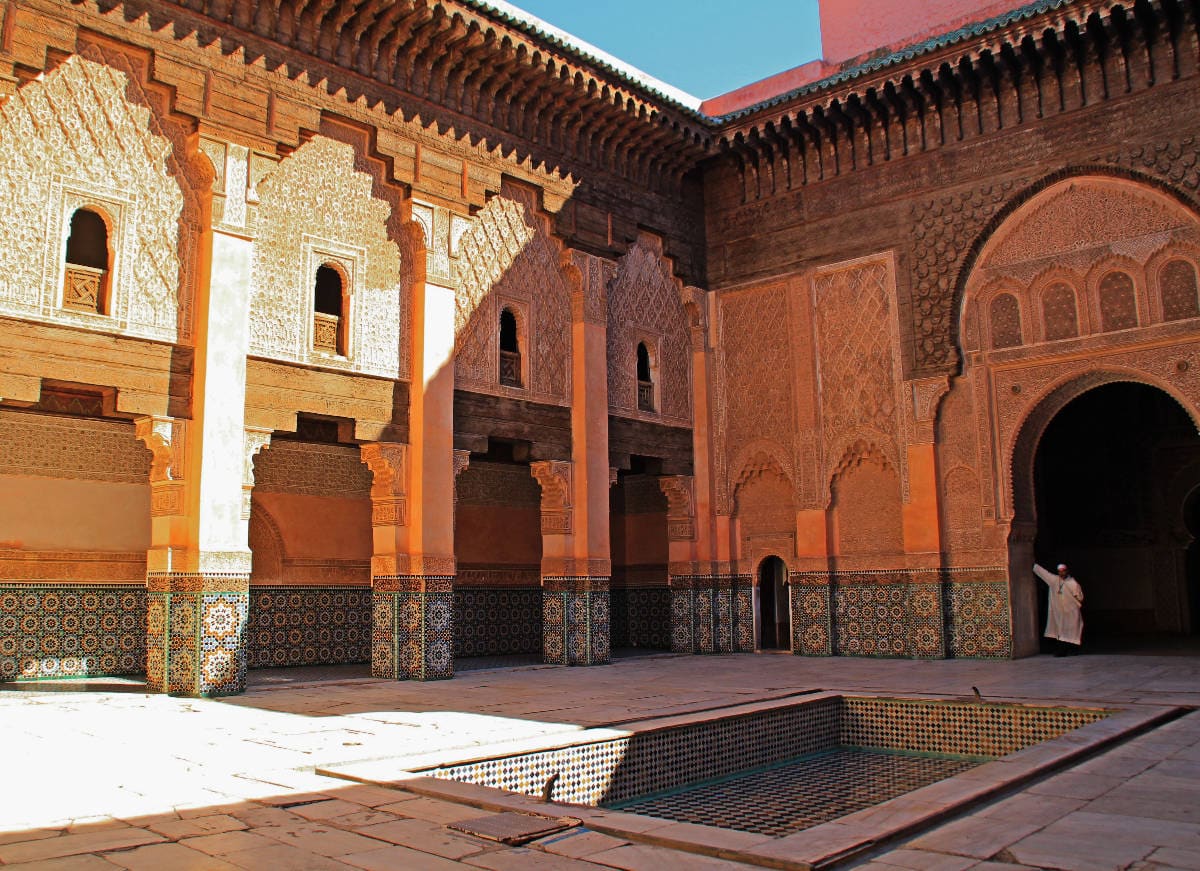 We continued walking through the medina and stopped to listen to a song we heard coming from within a gathering of locals. Perhaps it wasn’t a song; perhaps it was a protest chant? Of which, I am unsure. We then encountered our first scam in Morocco by someone who offered to show us “the most specular view of Fez” free of charge; but of course it was neither spectacular nor free. From this view, we were able to see the Mausoleum of Sidi Abd el Aziz, which isn’t open to non-Muslims. It was built in 1508, and the building is white with a pointed roof tiled in green. 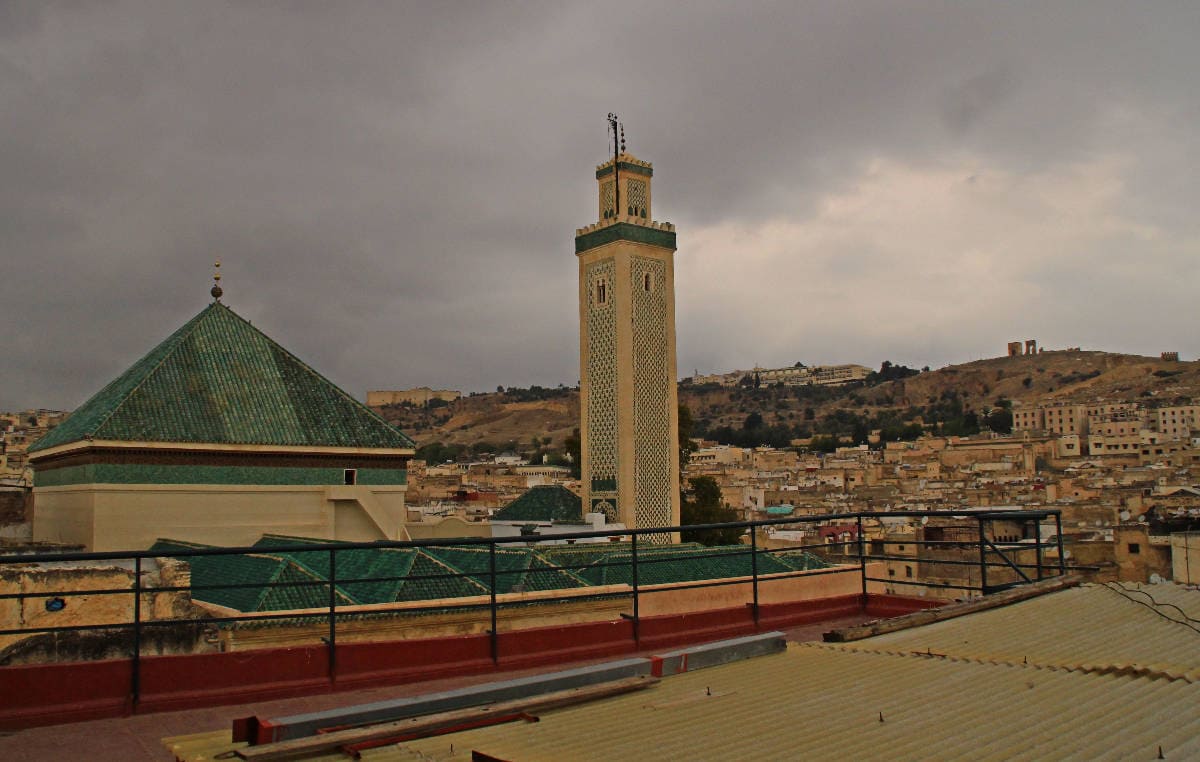 The souks (bazaars), while overwhelming, are an experience in and of themselves, and in the center of them all is Djemaa El-Fna, the main square, which is supposedly fantastic at night when musicians, dancers, and storytellers flood the square with music. 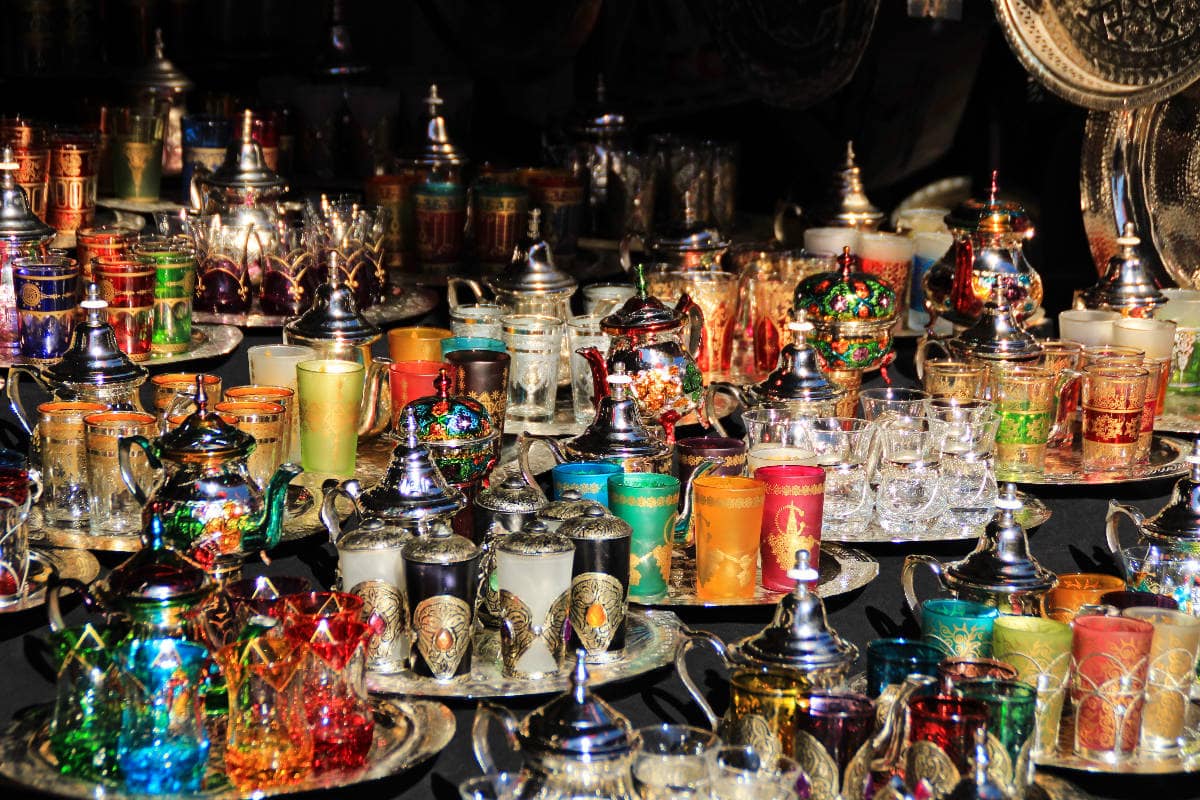 None of us was feeling all that great, and the African sun wasn’t much of a help. We finished our day by viewing the Koutoubia Mosque, and we relaxed there for a bit. 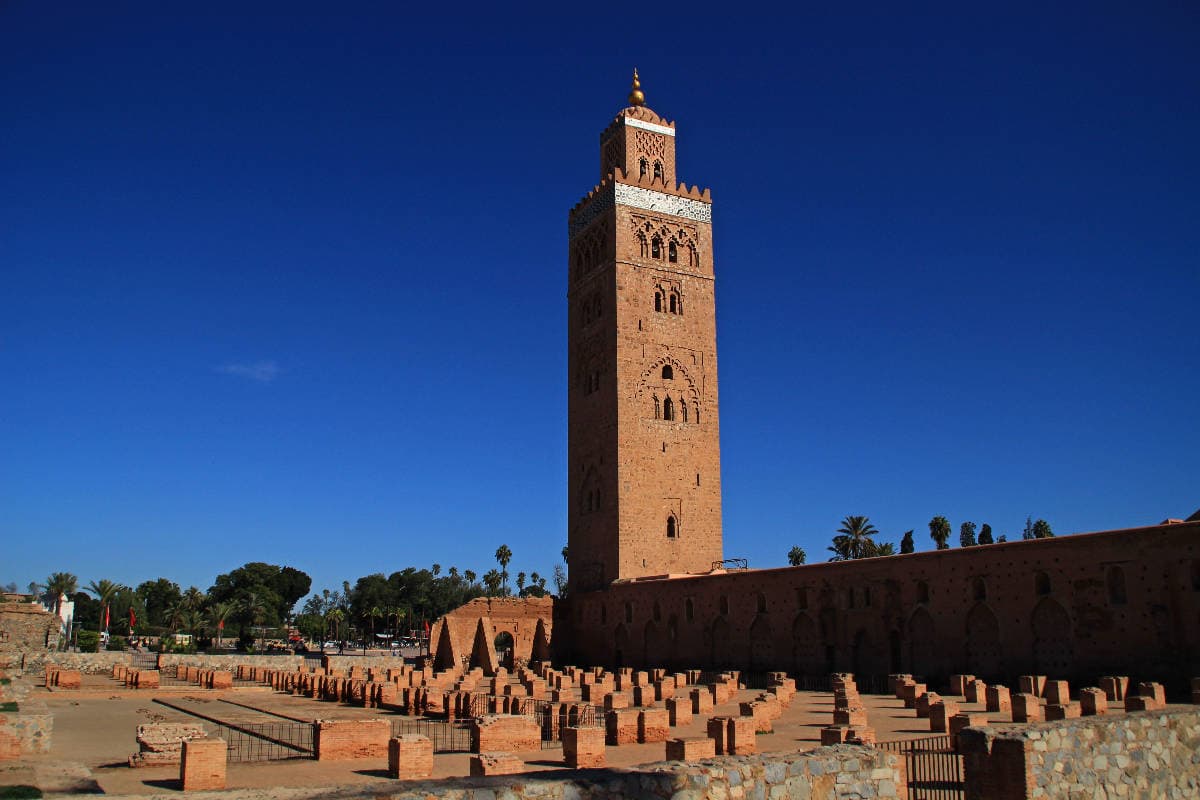 We returned to Riad Star, grabbed our bags, thanked our gracious hosts immensely, and were off to Rabat and Riad Dar Zouhour. The drive was quite easy and straightforward; that is, until we hit a traffic jam. A traffic jam unlike one I have ever seen. It was so bad that people started getting out of their cars and chatting. After an hour without moving, people decided that it would be wise to cross the median into oncoming traffic. This particular median was grassy but had a huge ditch. Erik, our dear friend and confident driver, decided to follow the Moroccans’ lead and cross into the oncoming traffic. Making the U-Turn to change direction to go to Dar Zouhour via backroads, we were the only car not to get stuck in the ditch! Proud moment right here!

At last, we arrived at Dar Zouhour in Rabat after midnight. This particular riad was situated only two minutes into the medina from the gate, making it exceptionally accessible. We paid a parking attendant the equivalent on $4 USD to guard our car for the remaining five hours we had in Rabat before having to depart for the Tangier Airport to drop off our rental car.

Dar Zouhour was probably the easiest of our riads to find, and for that I am so grateful. We were taken to our sleeping quarters of the night (or what was left of it) and found them to be extremely comfortable. Just be warned, there’s no ceiling to the bathroom, so if you aren’t close with your traveling companions, you sure will be after leaving Dar Zouhour! 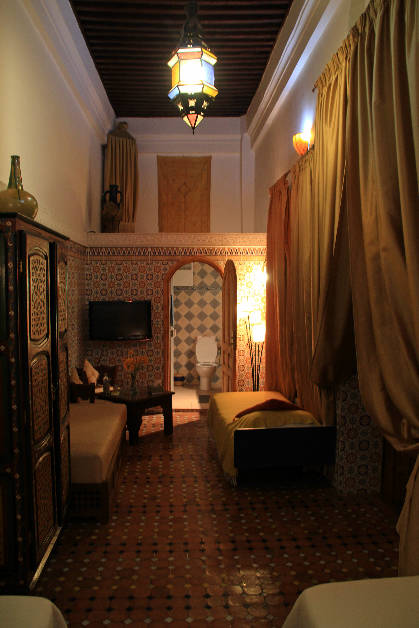 Exhausted, we overslept, waking in the dark at 4:20am for our two and a half hour drive to the airport. Needing a 40 minute taxi ride from the airport to the port, we were convinced that we were too late to make our ferry on time. Long story short, and one cop bribery later, we ran onto our ferry just in time. Success! Of course, we then sat there for an hour because the ferry departed late. Had we known, we wouldn’t have had to race through Morocco. 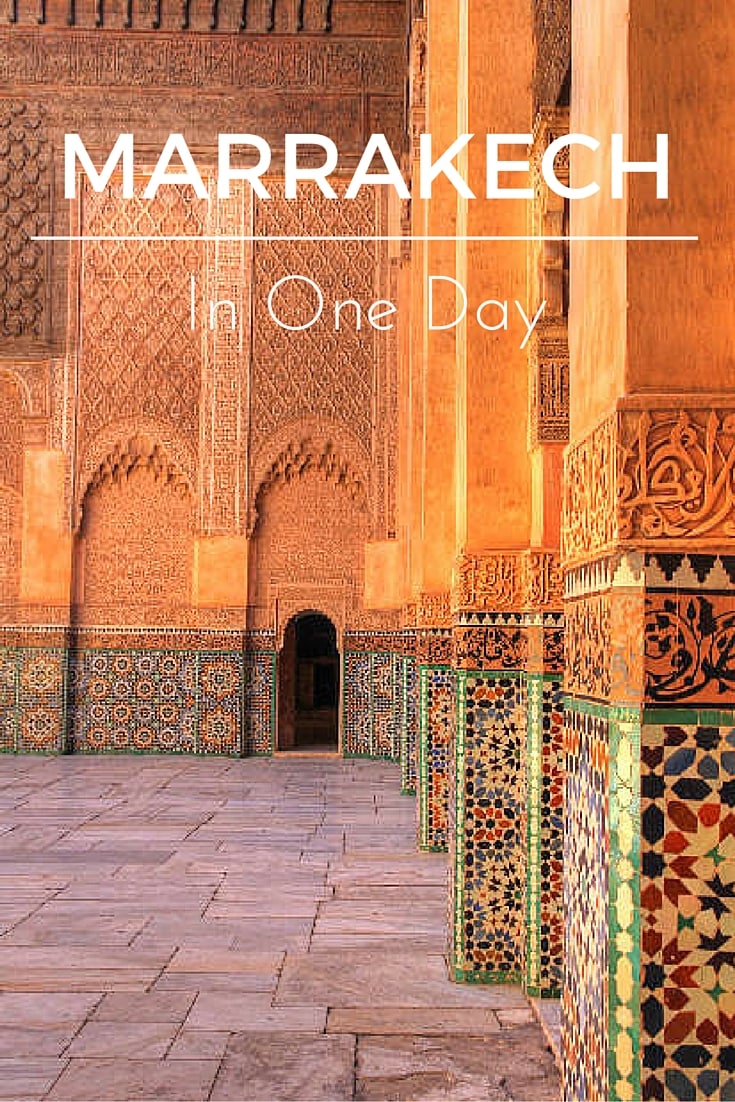 **Special thanks to Dar Zouhour for kindly offering me a complimentary stay. As always, all opinions are my own.