What could be better than having a view of the Remarkables on one side of your property, and Coronet Peak on the other? What if I added in the fact that you’d have a vineyard, basketball hoop, and tennis court as well? And, just what if, I said it happened to be in one of New Zealand’s most popular towns? There is no better place to stay in Queenstown than Manata Lodge. These luxury serviced apartments are the perfect retreat from the craziness that is Queenstown’s central area. 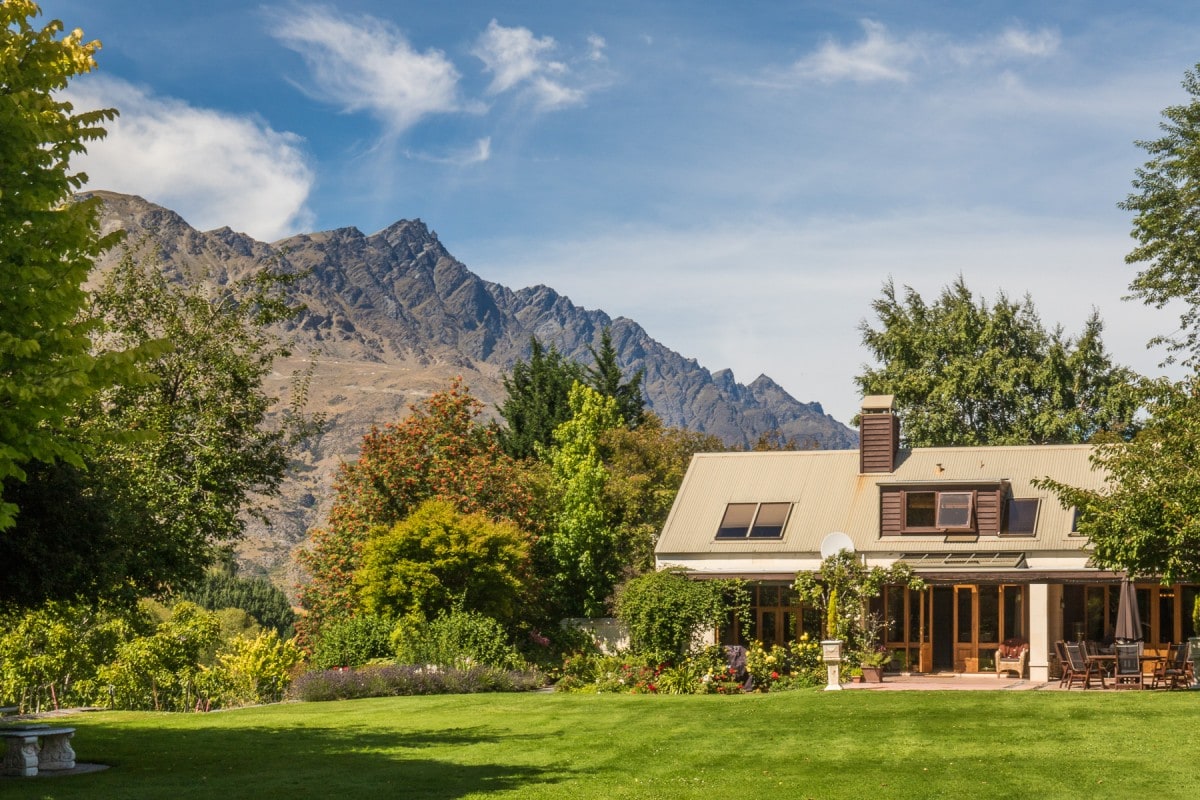 With two spacious studios and two beautiful suites, Manata Lodge can cater to any group size. While visiting Manata Lodge, we had the pleasure of staying in both their Wakatipu Suite and the Grande Dame Studio. Here’s what we loved:

The Wakatipu Suite is the largest suite that Manata Lodge offers, with two bedrooms and two bathrooms comfortably sleeping four people. Open up the doors of the huge master bedroom and find yourself looking straight into Coronet Peak. Gorgeous! It is beautifully decorated, with a large living room, flat-screen TV, proper dining room table, and fully-equipped kitchen. 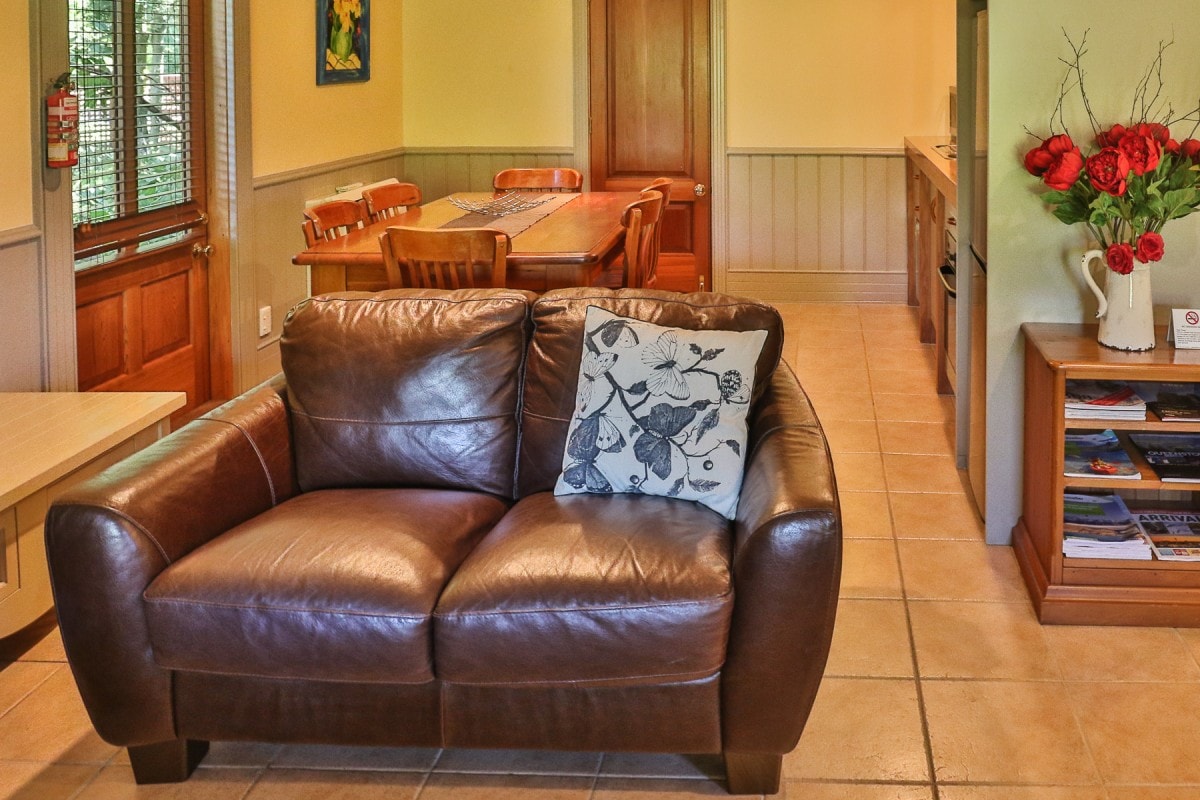 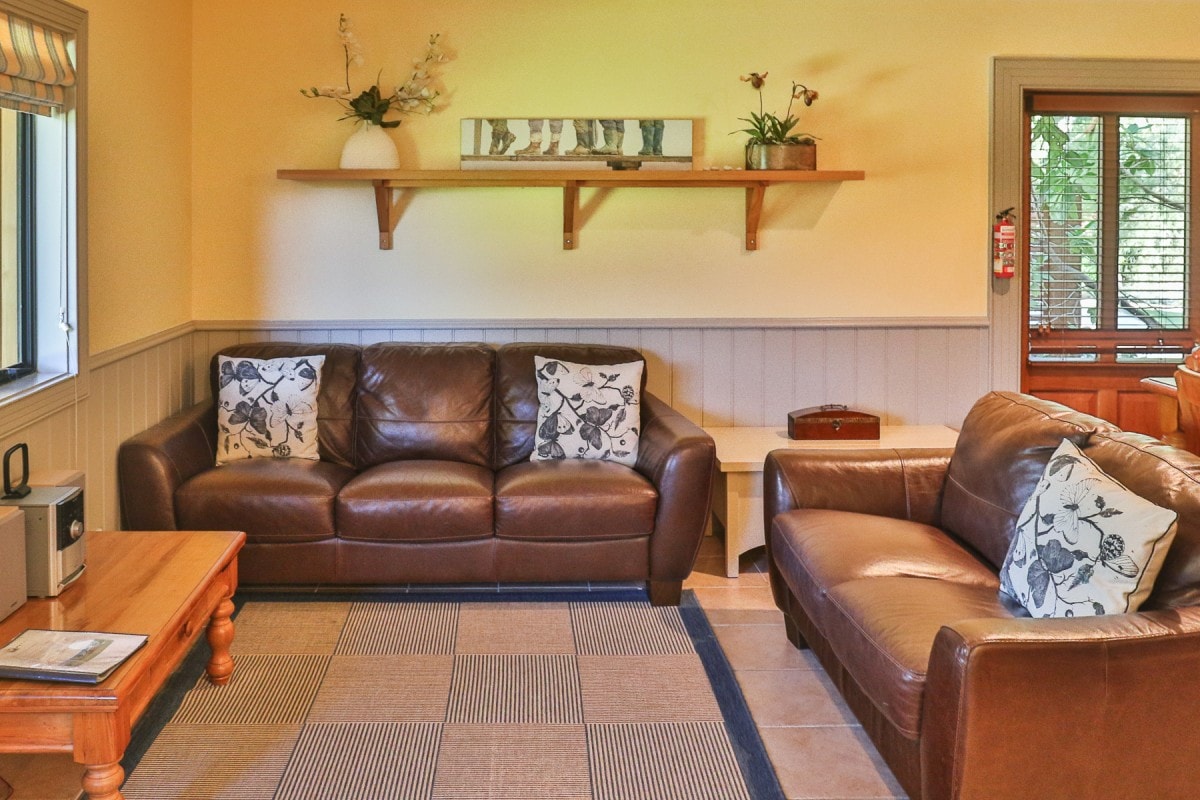 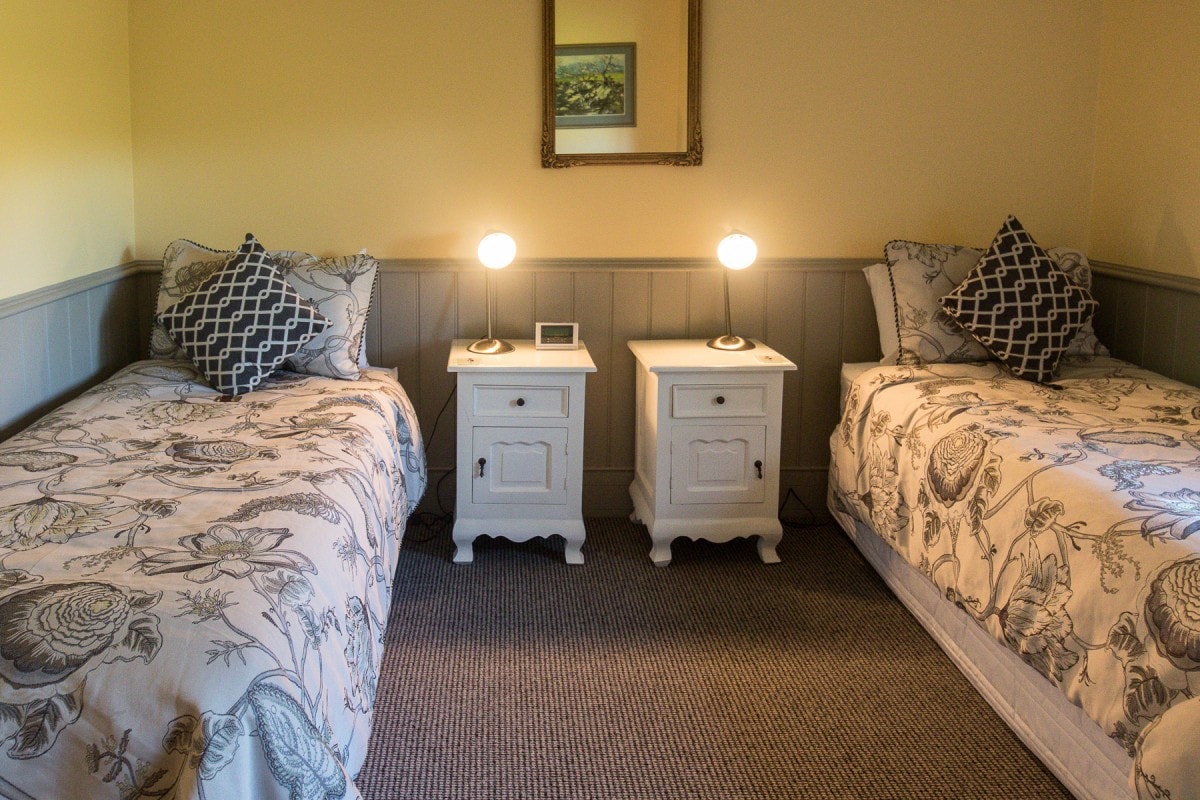 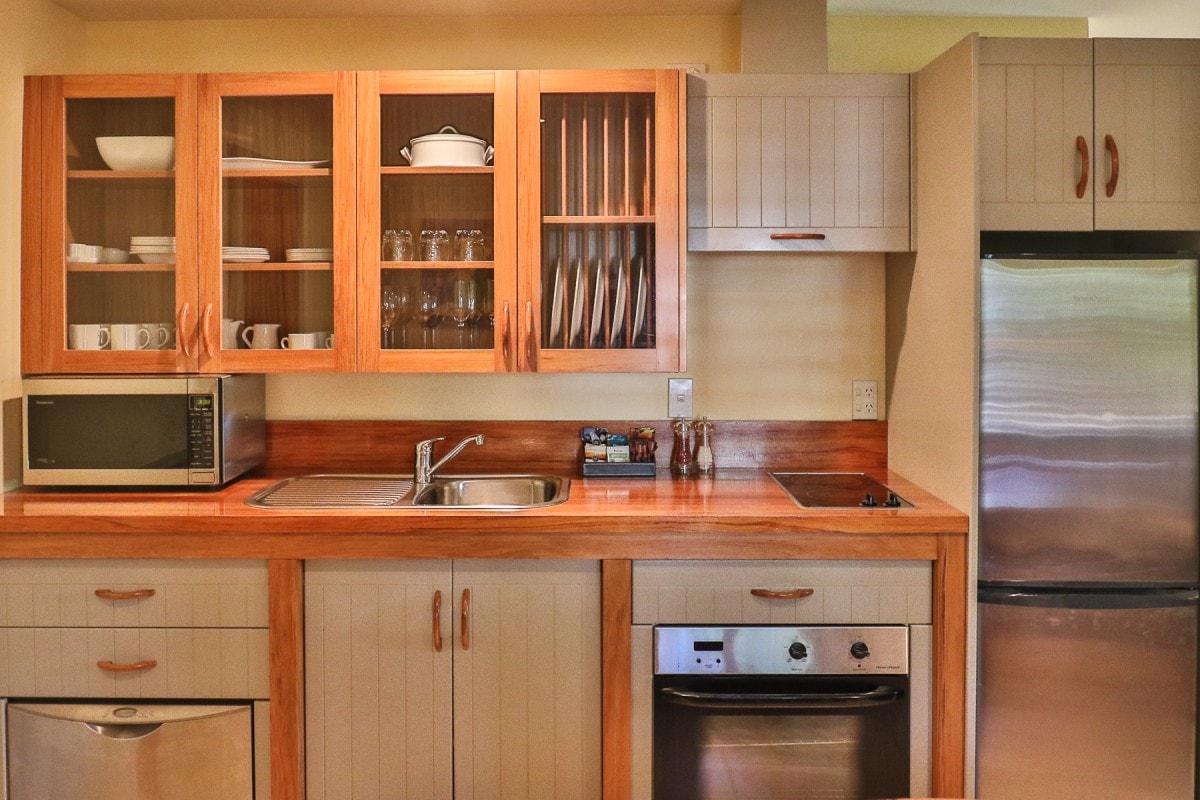 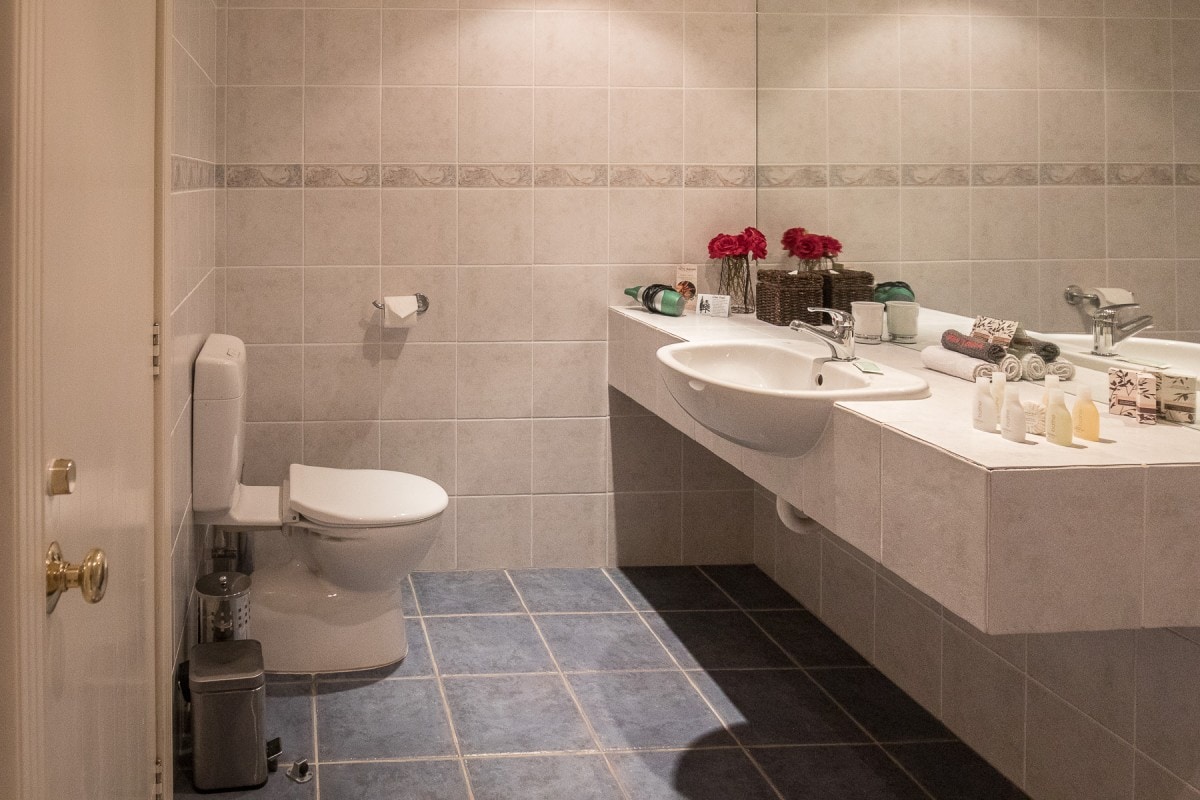 Should you be a group larger than four, it’s important to note that the Wakatipu Lodge can connect to the Grande Dame Studio, making it suitable to sleep about six people. With the extra space that the Grand Dame Studio provides, you’ll feel as if you’re in your own secluded house up in the mountains. 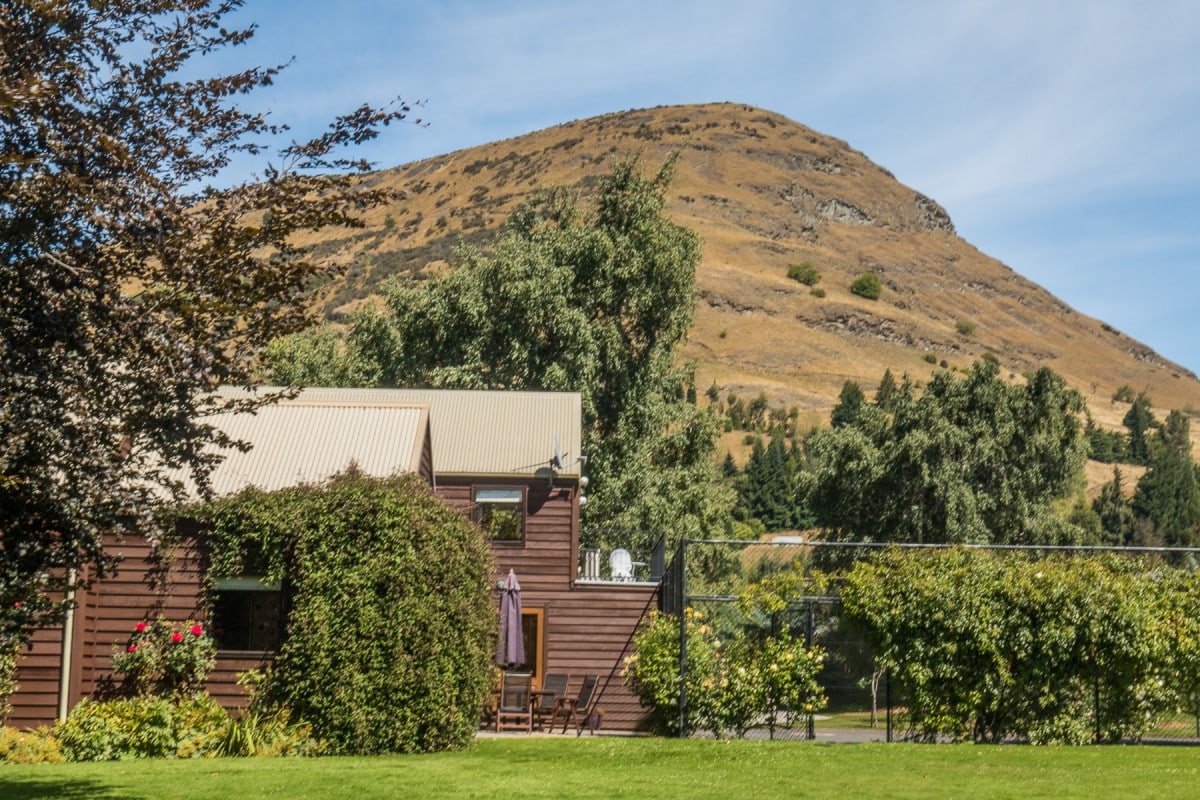 The Grande Dame is Manata Lodge’s incredibly spacious and homey studio apartment. With a choice of two twin-sized beds or one king bed, two couches, a dining room table, fully-equipped kitchen, and large bathroom with a nice tub, the Grande Dame Studio makes for a relaxing couples retreat (er…or brother sister retreat should you be in our situation). The two french doors open up onto a large patio with outdoor furniture and a BBQ. 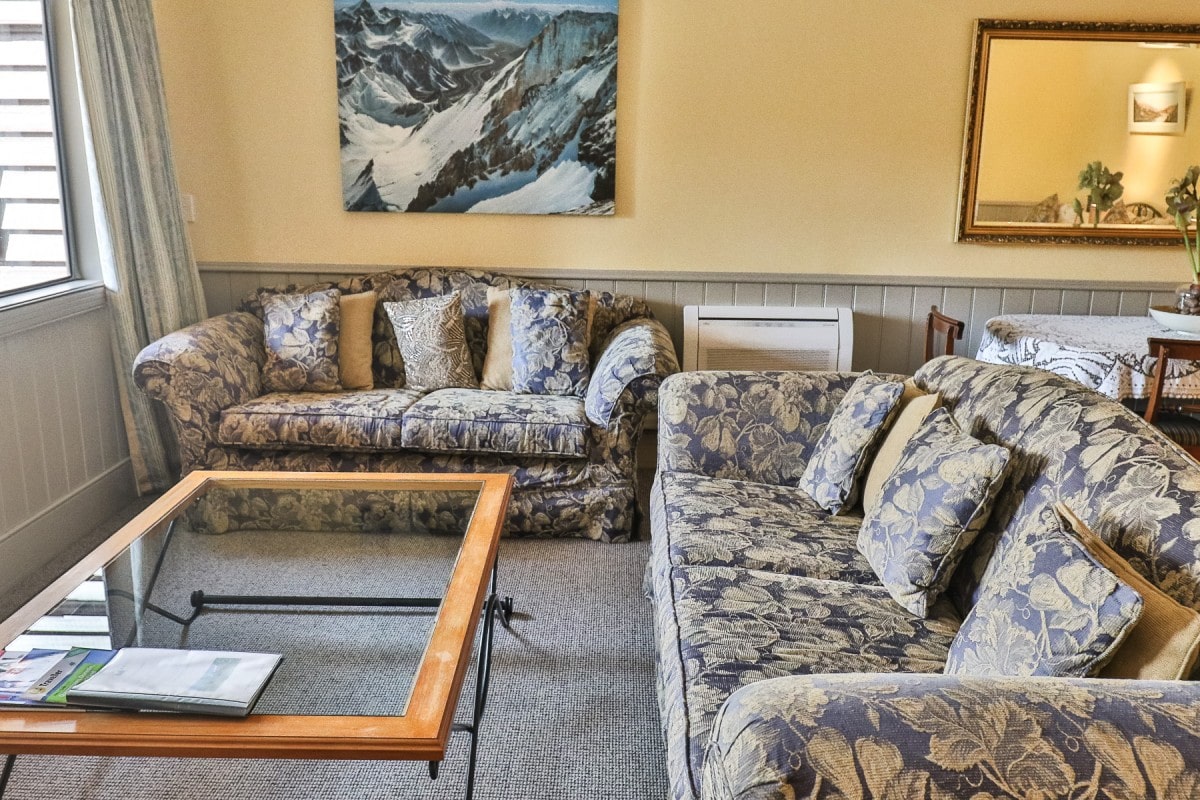 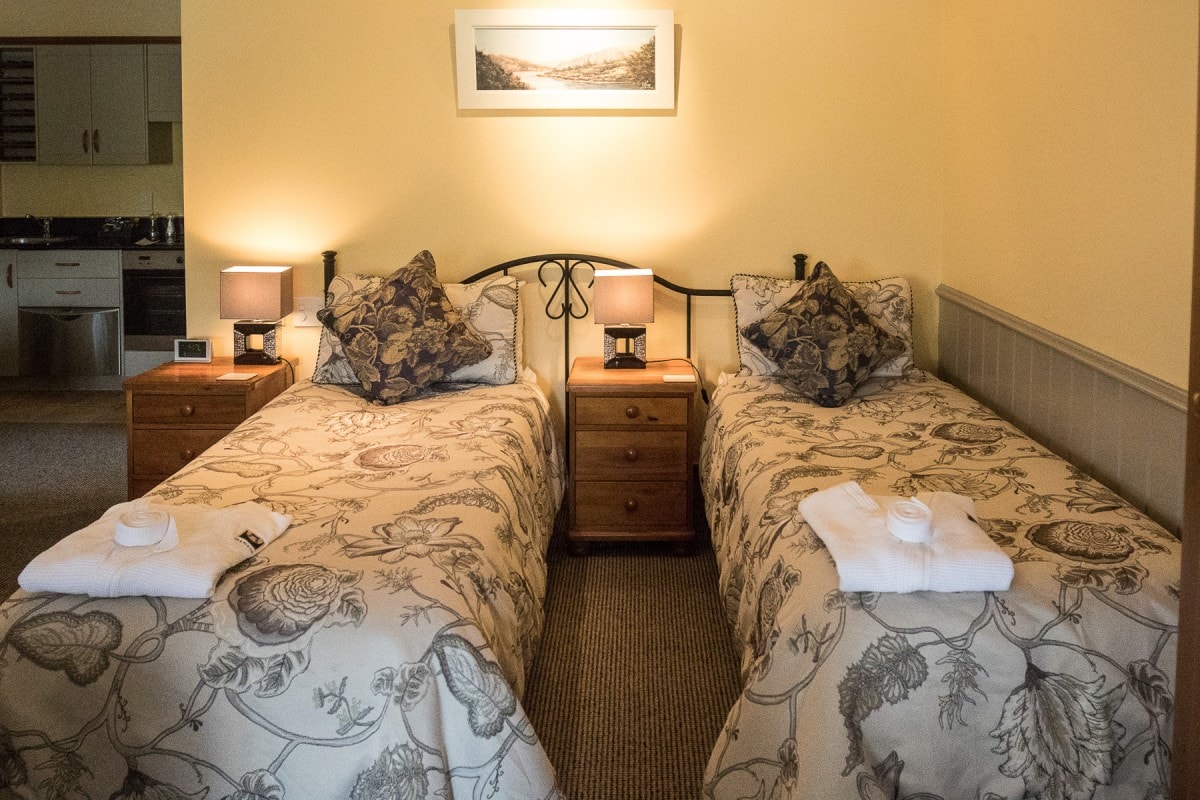 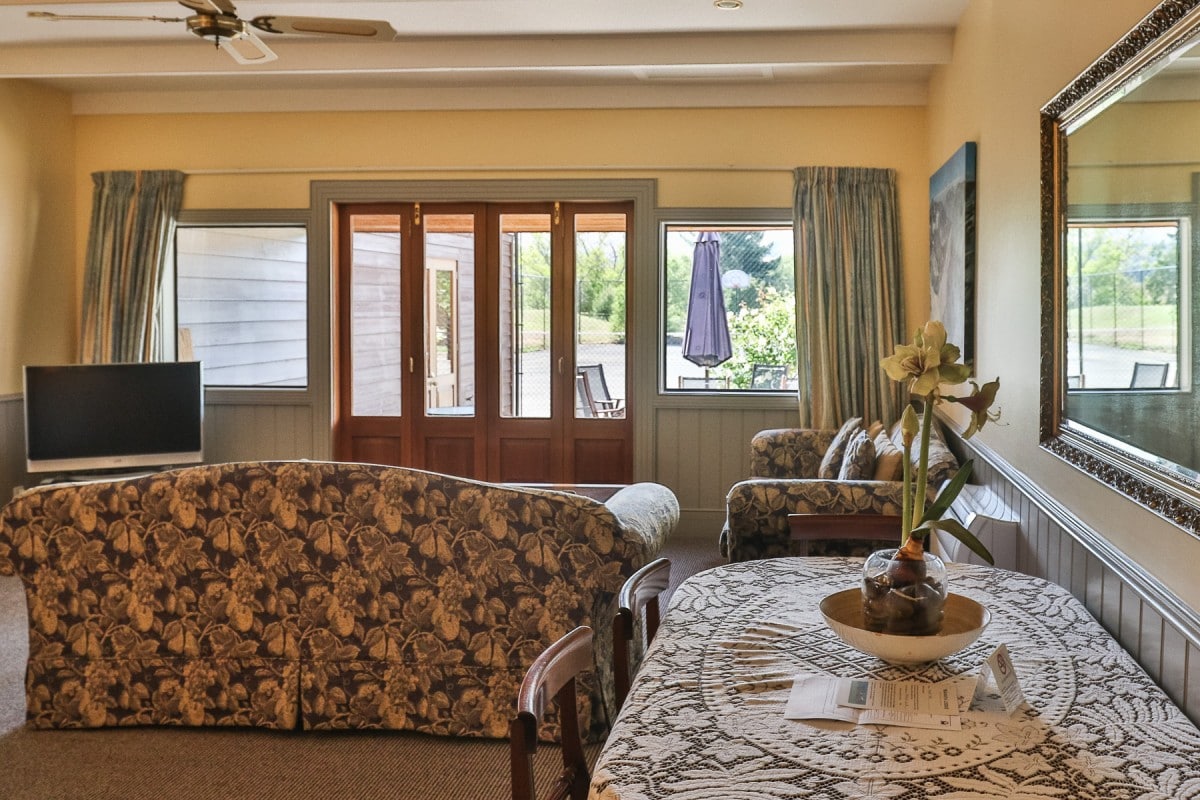 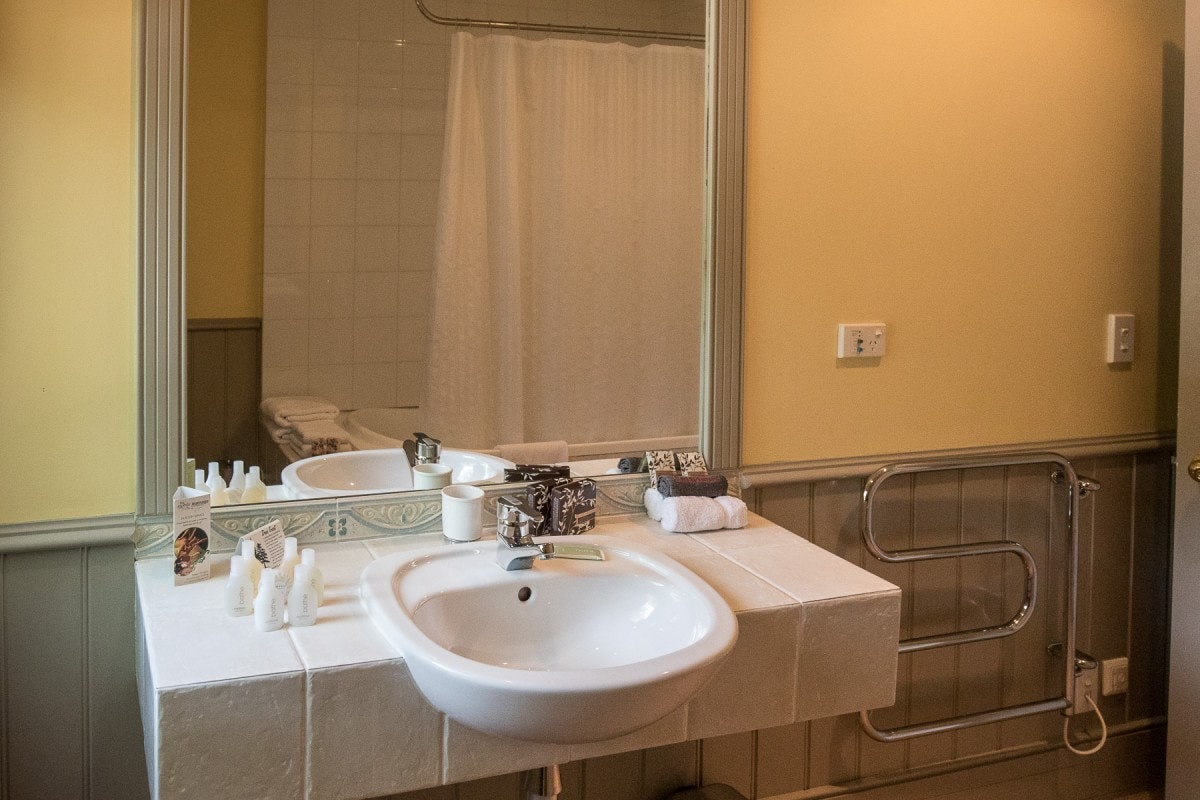 Both rooms were incredibly comfortable and unique in their own ways. We felt so at home, that it was hard to pull ourselves away to head into town!

Apart from the typical “front of house” facilities, such as offering to book your activities/transportation or daily room cleaning, Manata Lodge offers a range of DVDs, games, movies, books, laundry service, mountain bikes, and tennis rackets. All complimentary. If those aren’t up your alley, you could always sit in the vineyard while surrounded by Queenstown’s most famous mountains! 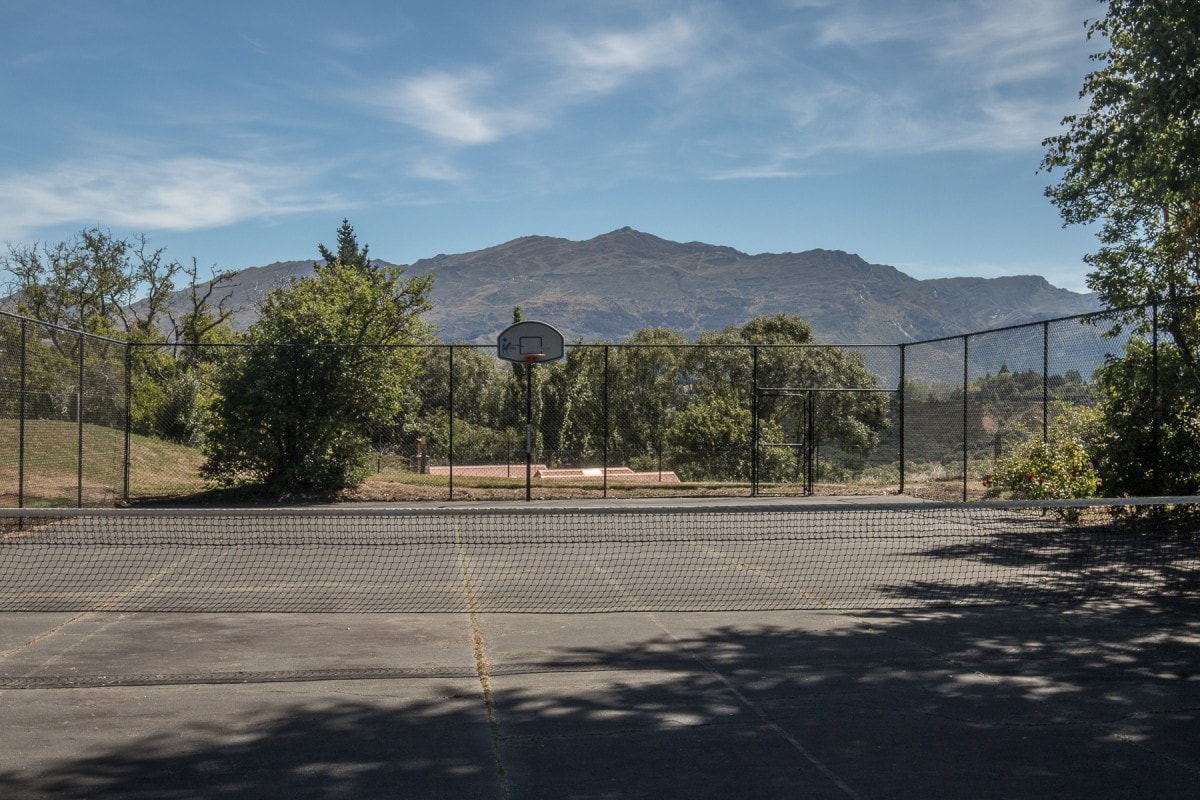 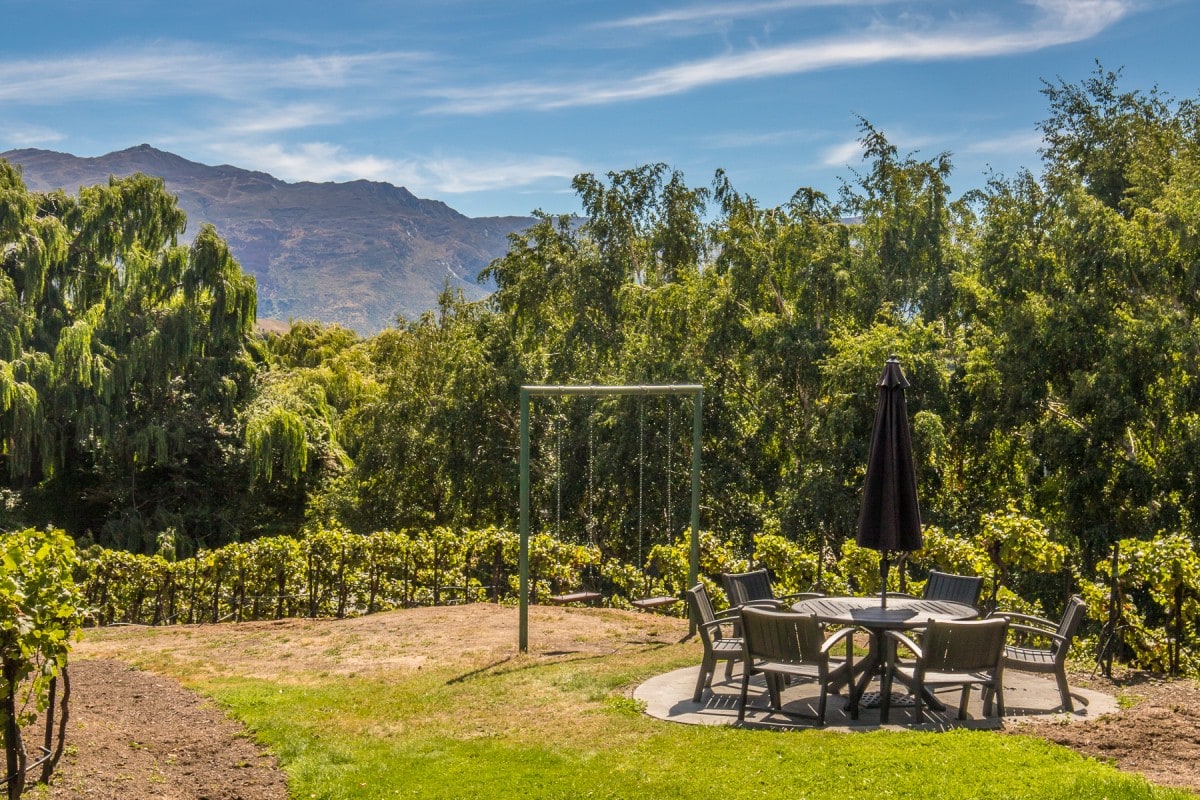 As Manata Lodge is about 13 minutes from central Queenstown, it’s definitely easier to access by car. Since New Zealand is a roadtripper’s paradise, this proved no issue for neither myself nor David. Quite honestly, we preferred being a bit outside of town — we were closer to the Remarkables, Coronet Peak, AJ Hackett’s Original Bungy, and Over The Top’s Heli Airstrip. There is a large grocery store and petrol station right around the corner too, so there’s no need to venture into town if you want a quiet night in cooking for yourself soaking in the silence. 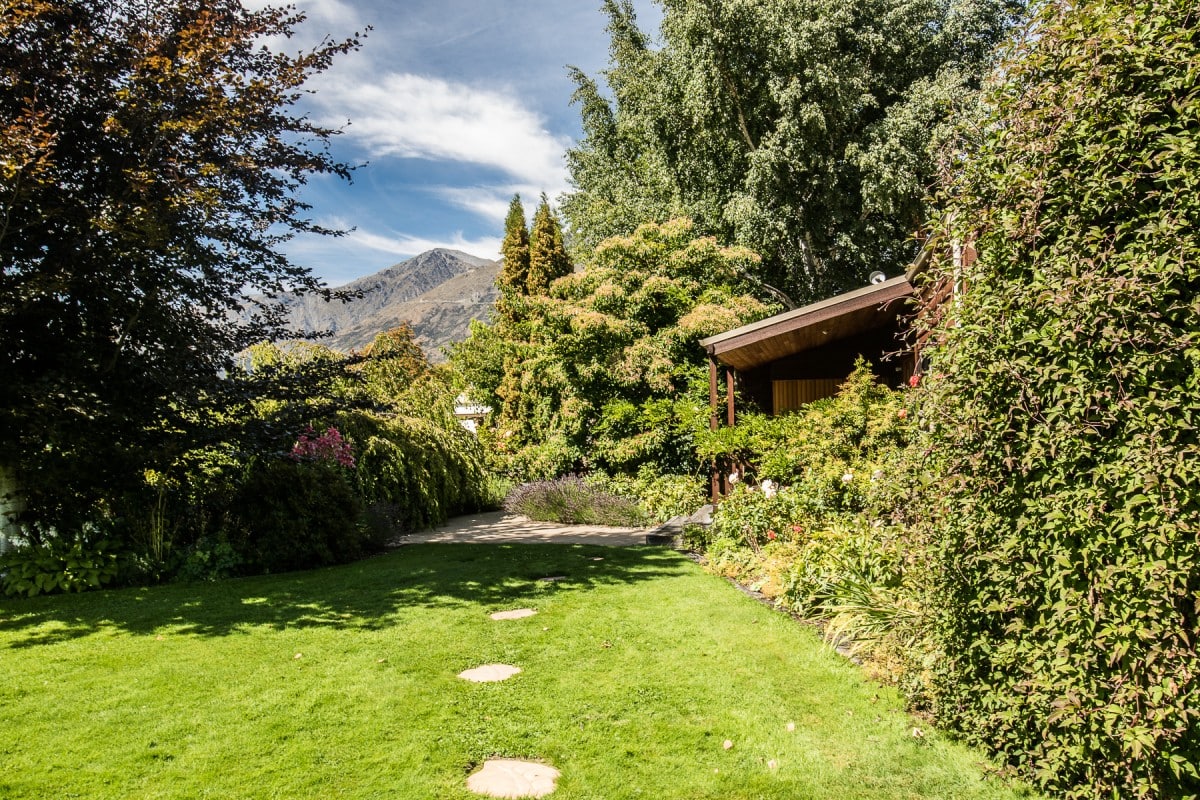 The owners, Warren and Ethel, are absolutely lovely! They live on sight and could answer any questions you might have about Queenstown or Manata Lodge itself. They were a joy to be around, and we are so grateful to have met them.

Manata Lodge got its name from an old Maori legend. In this legend, the daughter of a local chief, Manata, was promised to be married to another chief, despite being in love with a young warrior named Matakouri. Before her marriage, however, she was stolen away by a giant! Manata’s father offered her hand in marriage should he be braveenough to rescue her. There was only one warrior in the village willing to try: Matakouri. When he found her bound in a valley, she pleaded for him to go away for he would be killed. Her pleading tears broke the magical bonds and the two lovers ran off together. Manata’s father kept his word, and they were married. In order to feel that the women of the village would be safe, however, Matakouri returned to the giant’s land and set fire to the ferns he was sleeping on. Legend has it that he burned a hole in the ground that melted the snow of the surrounding mountains. Supposedly, the burning of this giant formed Lake Wakatipu, which is shaped like a sleeping giant! 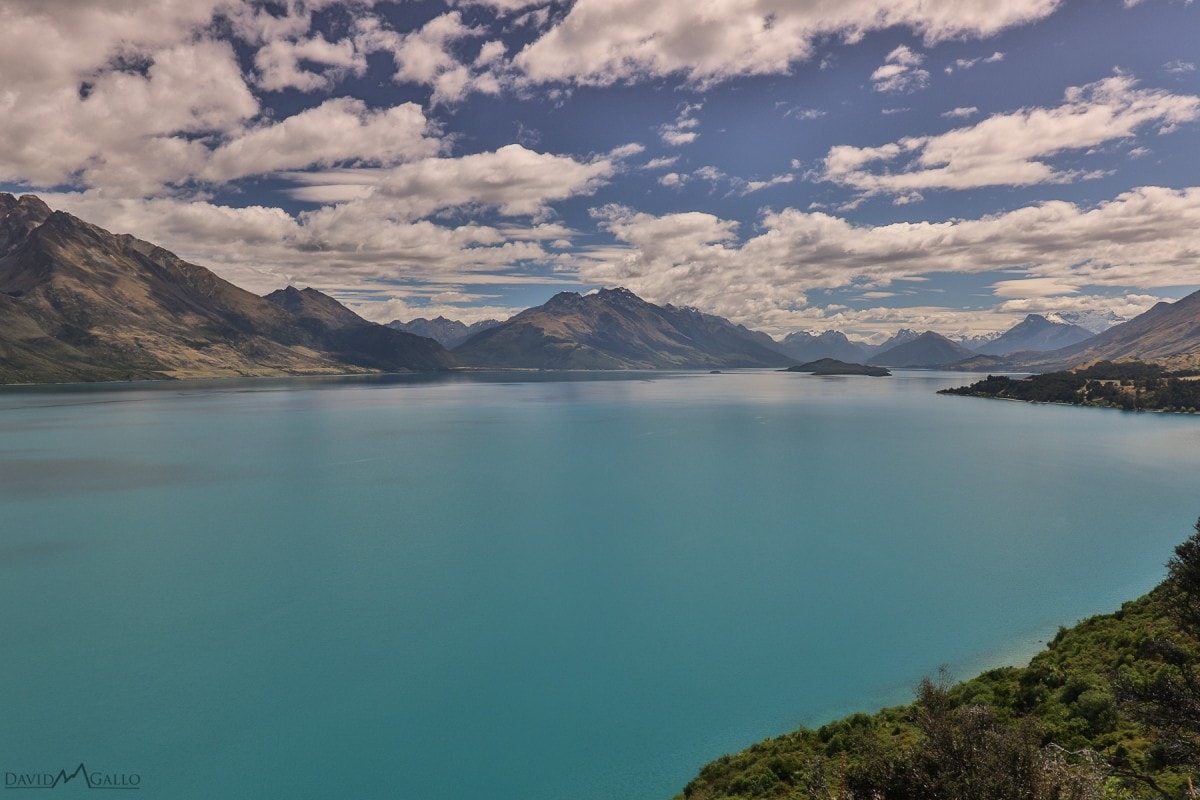 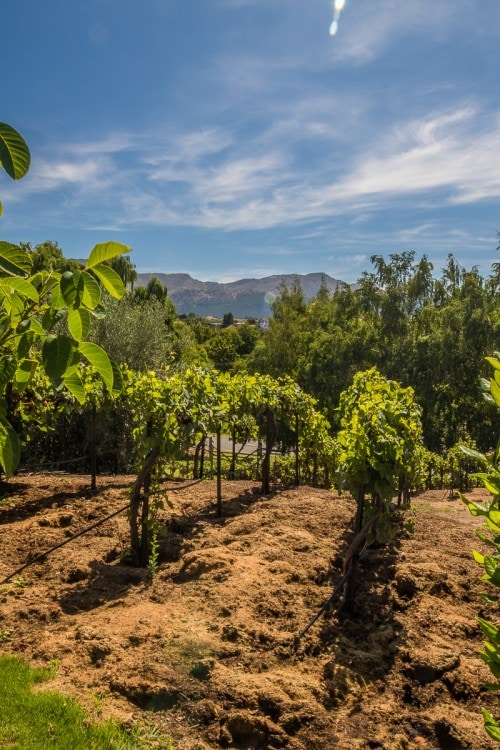 Overall, Manata Lodge far surpassed our expectations. After spending quite a bit of time in Queenstown, and New Zealand as a whole, there is no place we would rather stay! 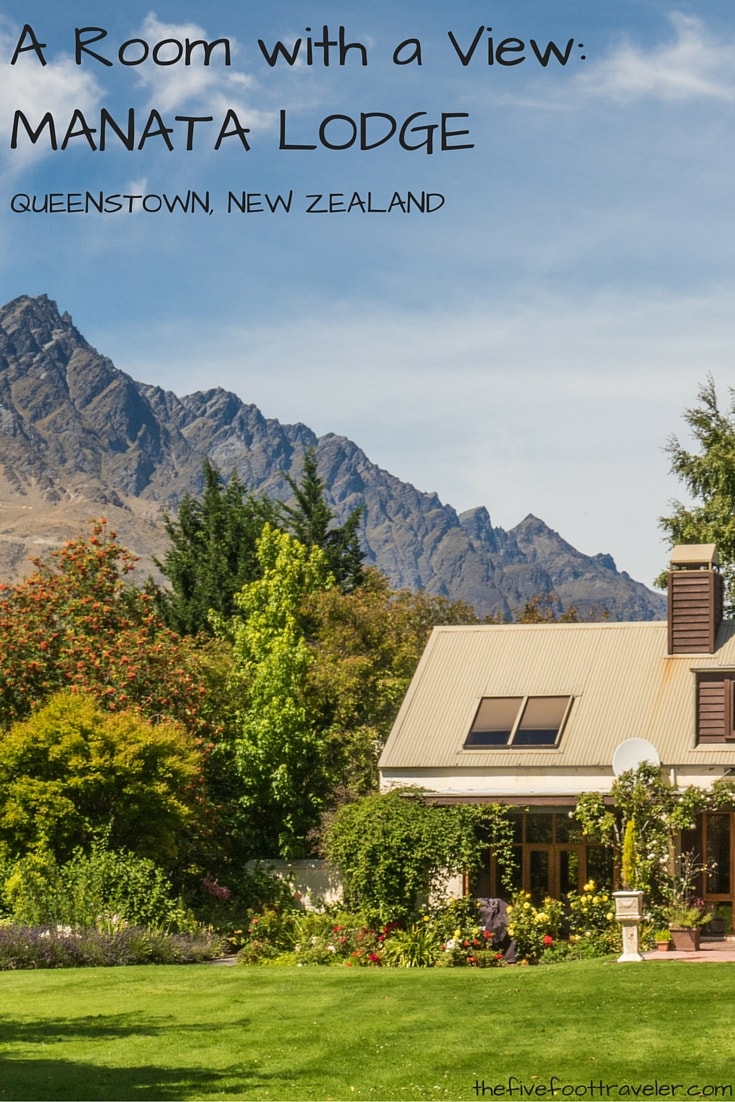 **Special thanks to Manata Lodge and Air New Zealand for sponsoring our journey. As always, all opinions are my own. Photographs taken by David M Gallo Photography.