Lviv is situated in Western Ukraine and its historical center has been listed as a UNESCO World Heritage Site. Like many places in Eastern Europe, Ukraine has a turbulent past filled with plenty of conquerors.

Poland and Ukraine were once part of a region called Galicia; the King of Galicia founded Lviv in 1256, but Lviv was overtaken by the Poles in the 1300s. It was then taken by the Habsburgs in the late 1700s, and given back to Poland in 1918. Then, as with much of Eastern Europe, Ukraine became part of the USSR from World War II until its collapse in 1991. 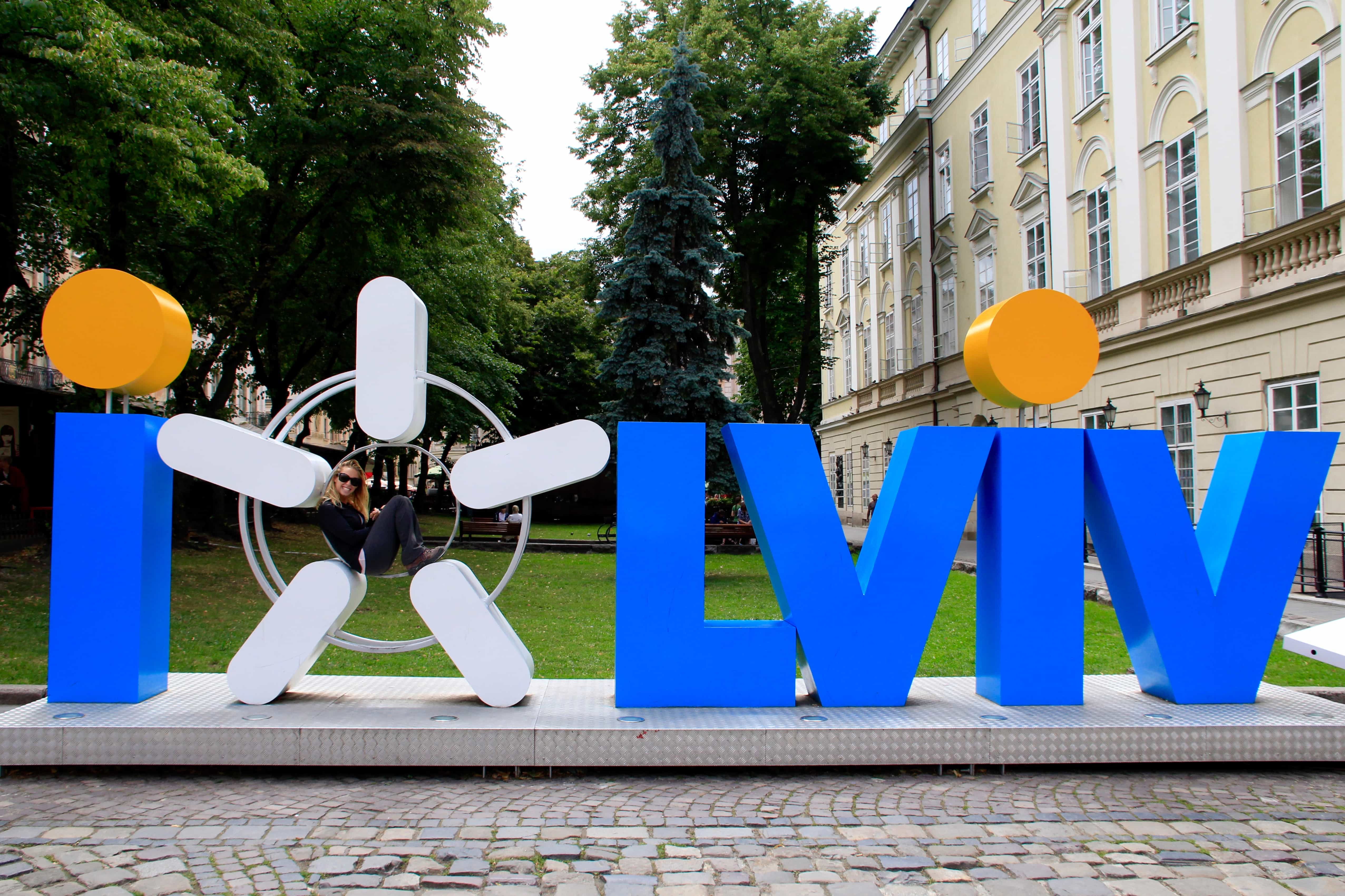 It is said that Lviv is one of the most Ukrainian cities in Ukraine, and has one of the best preserved historical centers within the country. The architecture is beautiful, the people are friendly, and the price is right. Tourism is yet to boom in Lviv as there are very few English speakers and it’s a bit difficult to access via public transportation. We managed though, and we are quite happy that we added Lviv into our itinerary at the last minute! It’s not a huge city, and everything is very easily accessible by foot.

If you spend one day in Lviv, there are five things you must see…

The Shevchenko Monument is the most popular monument within Lviv’s old town, despite not being old. It was constructed in 1992 and dedicated to the Ukrainian Revival and Taras Shevchenko, one of Ukraine’s greatest  poets. The monument itself appears to be a bit of a climbing gym for younger kids though. 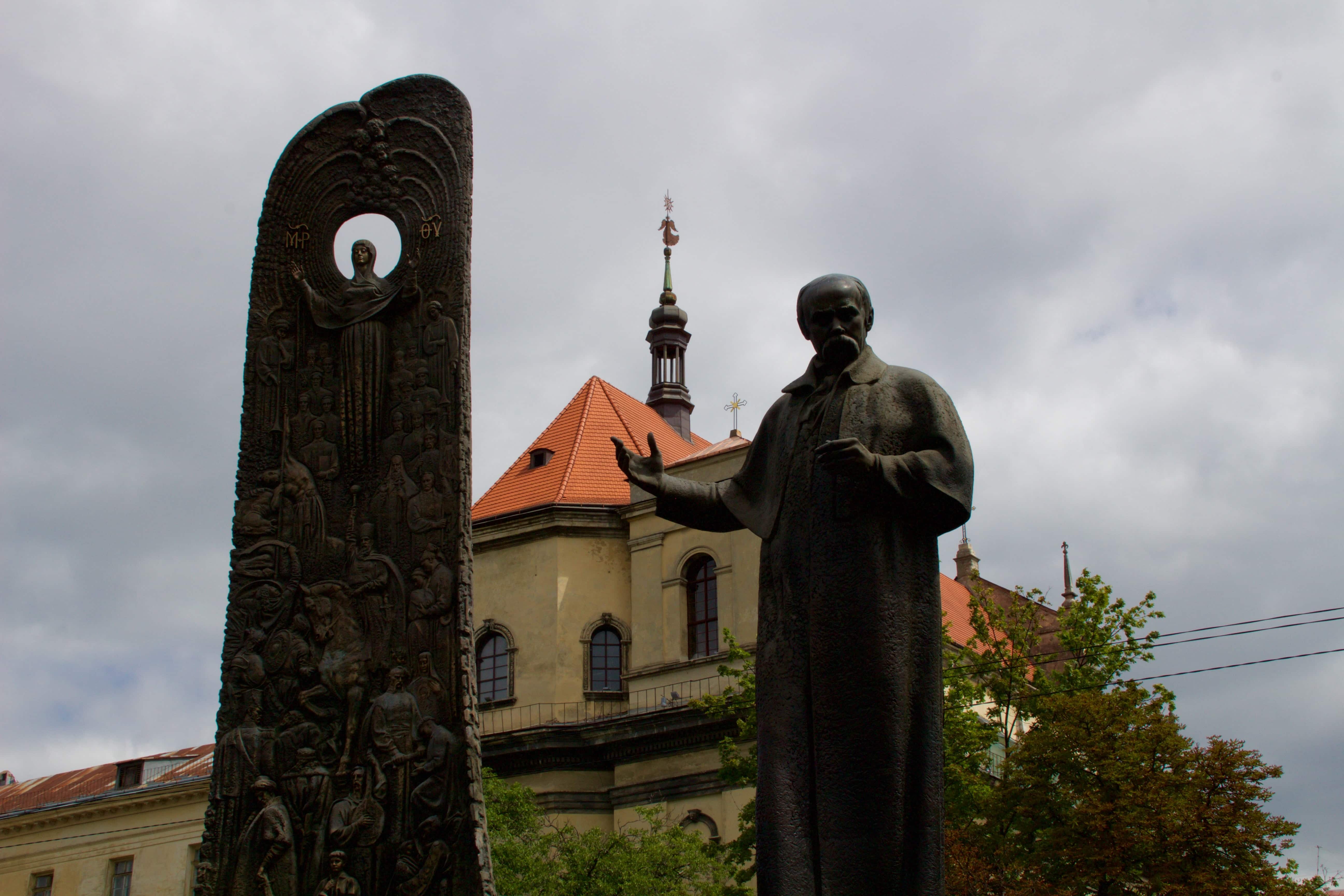 In 1460, the Franciscan Observantists (known as the Bernadines) were invited to build a monastery in Lviv. While those buildings were destroyed in the early 1500s, the present-day fortified monastery stands from the 17th century; it was consecrated in 1630. Located slightly outside the city walls, this is a real gem in Lviv. 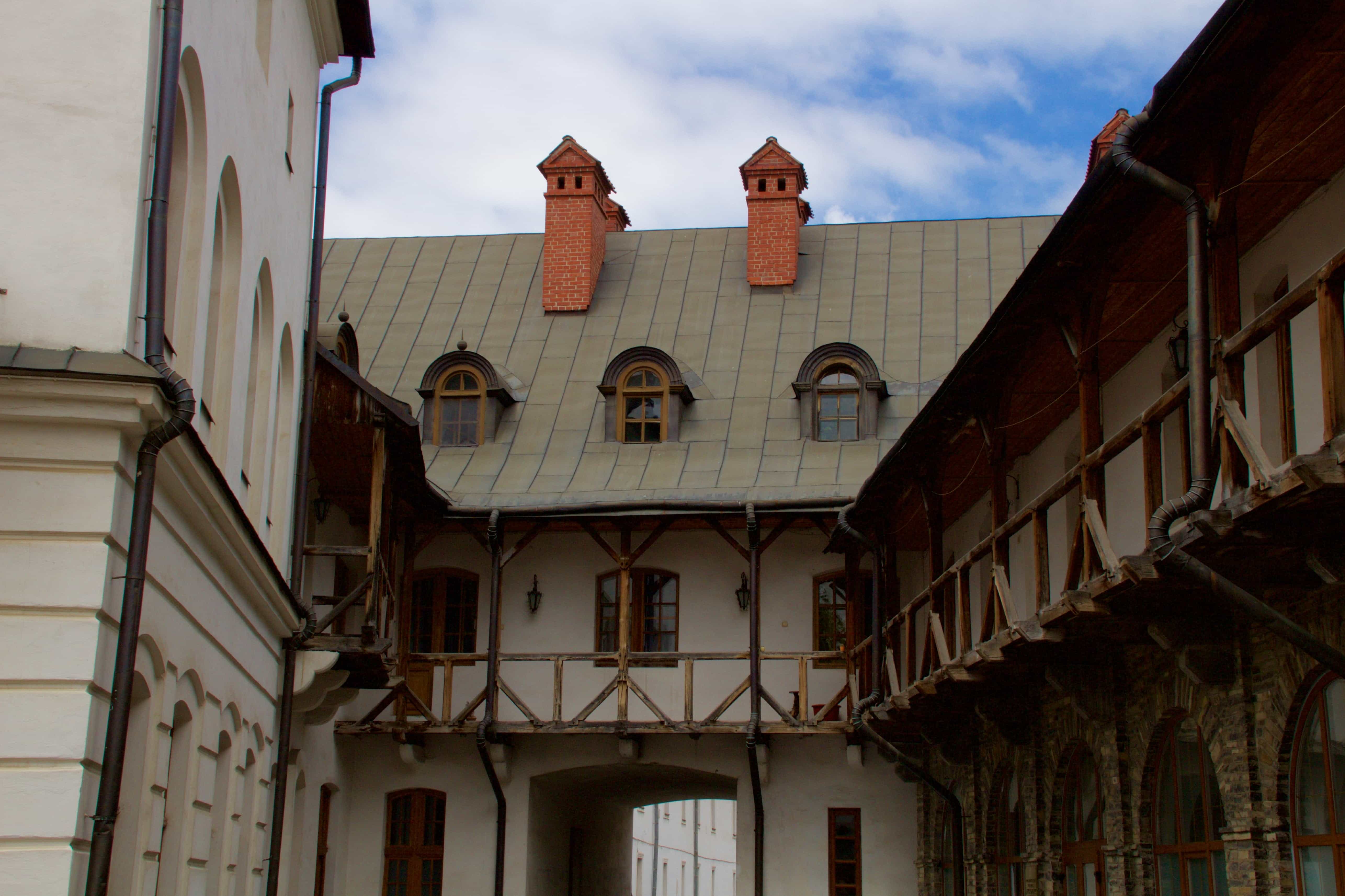 3. Viewpoints from the Lviv High Castle.

A bit outside of the old town, you’ll find a path with access to Lviv’s High Castle. While it’s no longer a glorious defensive fort, it offers beautiful views of the city below. 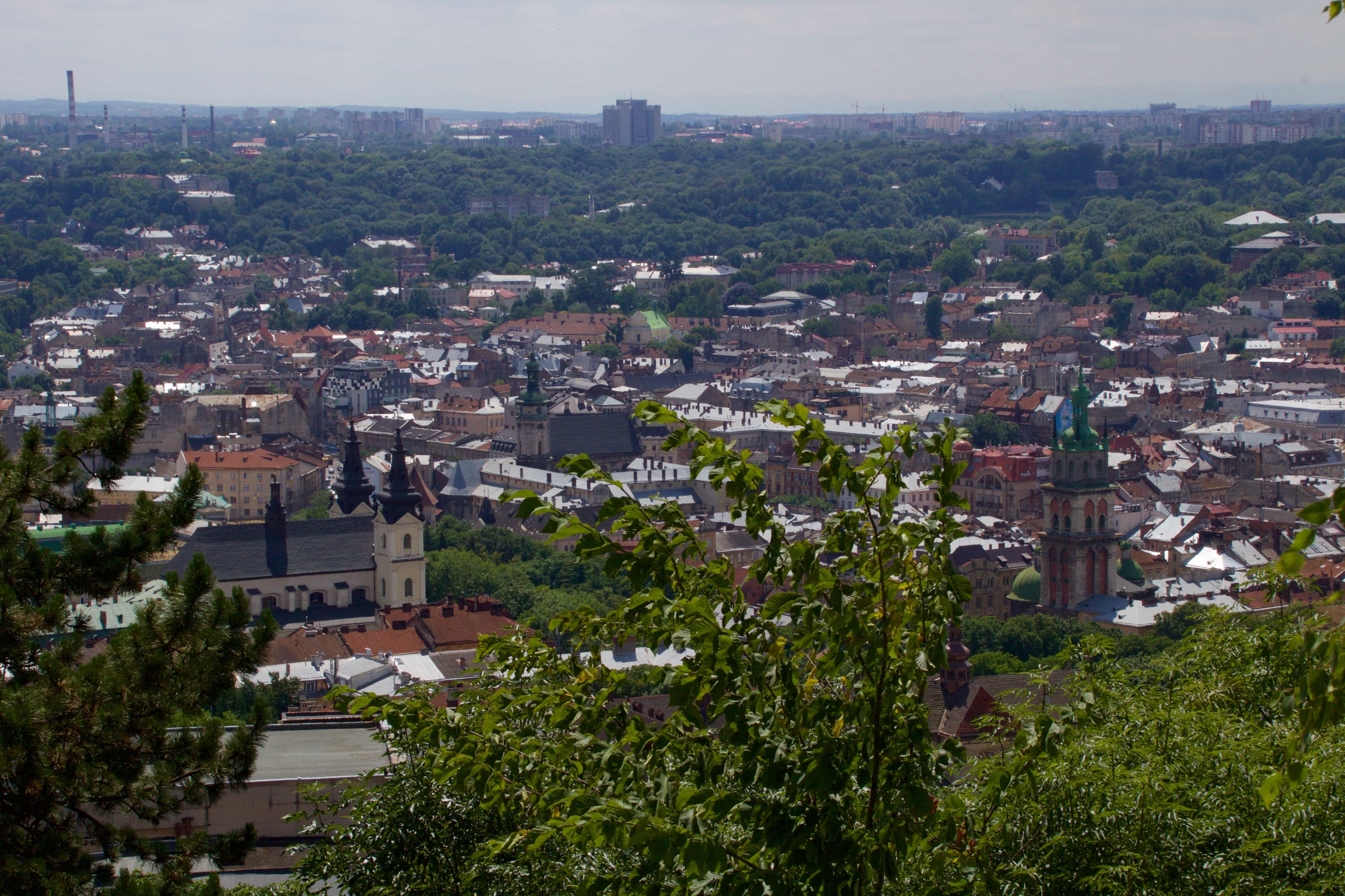 4. Theatre of Opera and Ballet.

The Lviv Opera sits in the heart of the the old town on Freedom Avenue. While I did not enter, there’s a beautiful plaza and fountain in front of the Opera that’s most definitely worth seeing. 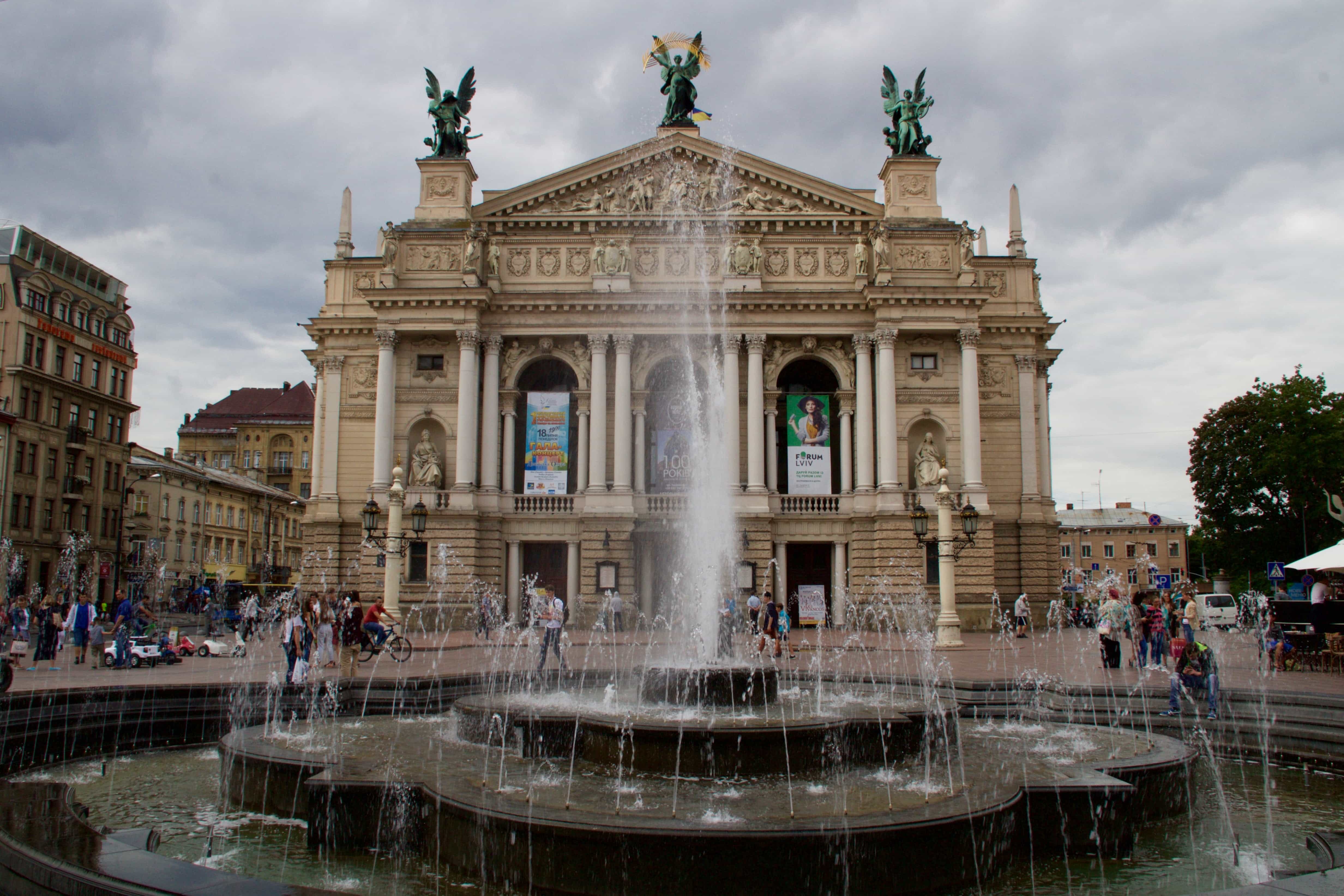 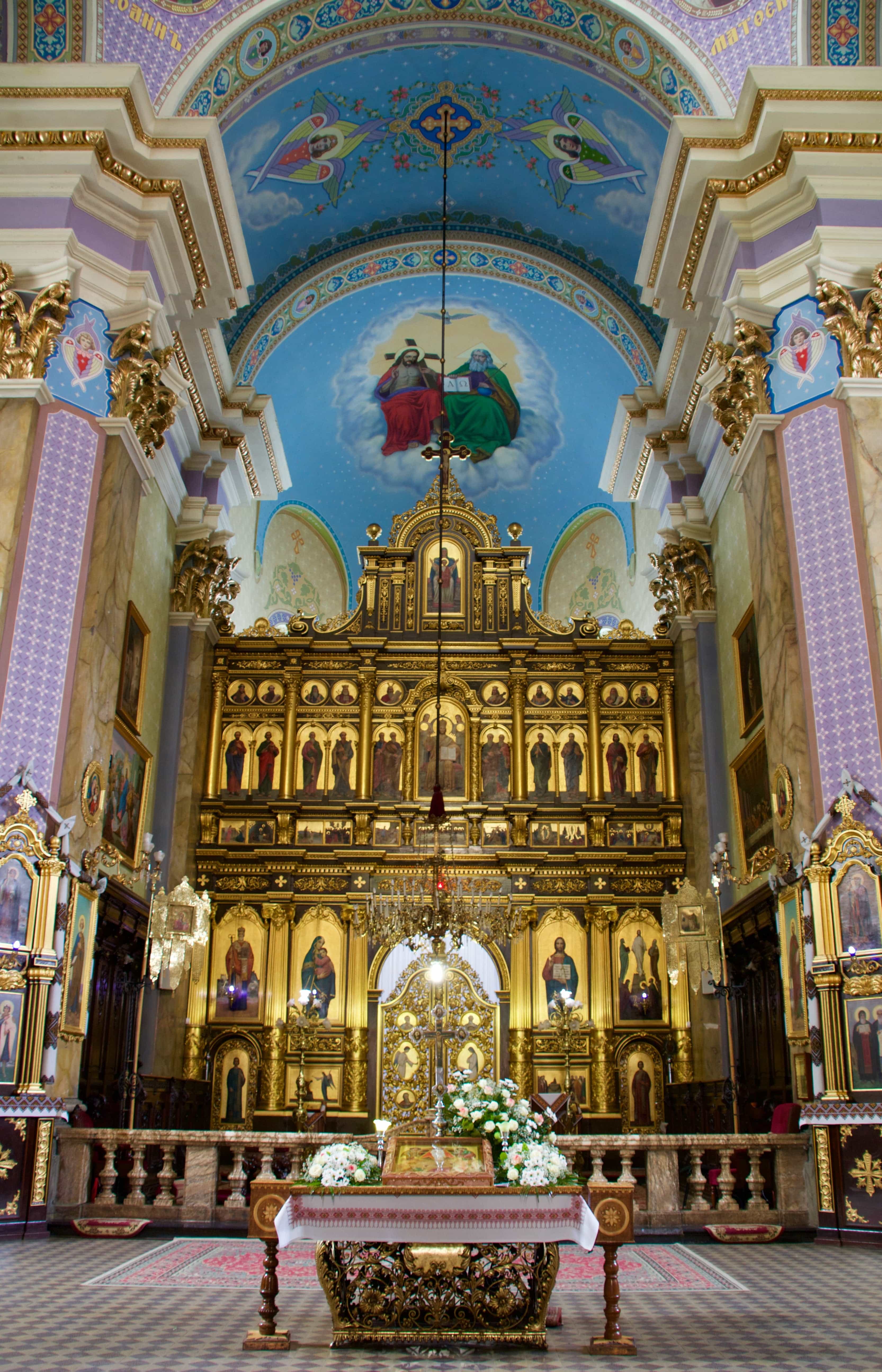 Situated in the heart of Lviv’s Old Town you’ll find ibis Styles Center Hotel. Surrounded by an array of art nouveau buildings, the modern facade of the ibis Styles truly stands out. It creates the perfect juxtaposition of the old and the new; in fact, the mirror-like exterior fuses the old and the new as you can see the reflection of the old in the new. Step inside to find a welcoming, colorful interior filled with comfortable seating and complimentary water bottles, tea, and coffee. The check-in process was as easy as could be, and before we knew it we were headed to our room. 5FT Note: Check-in starts at 2pm unless you pay for an early check-in. 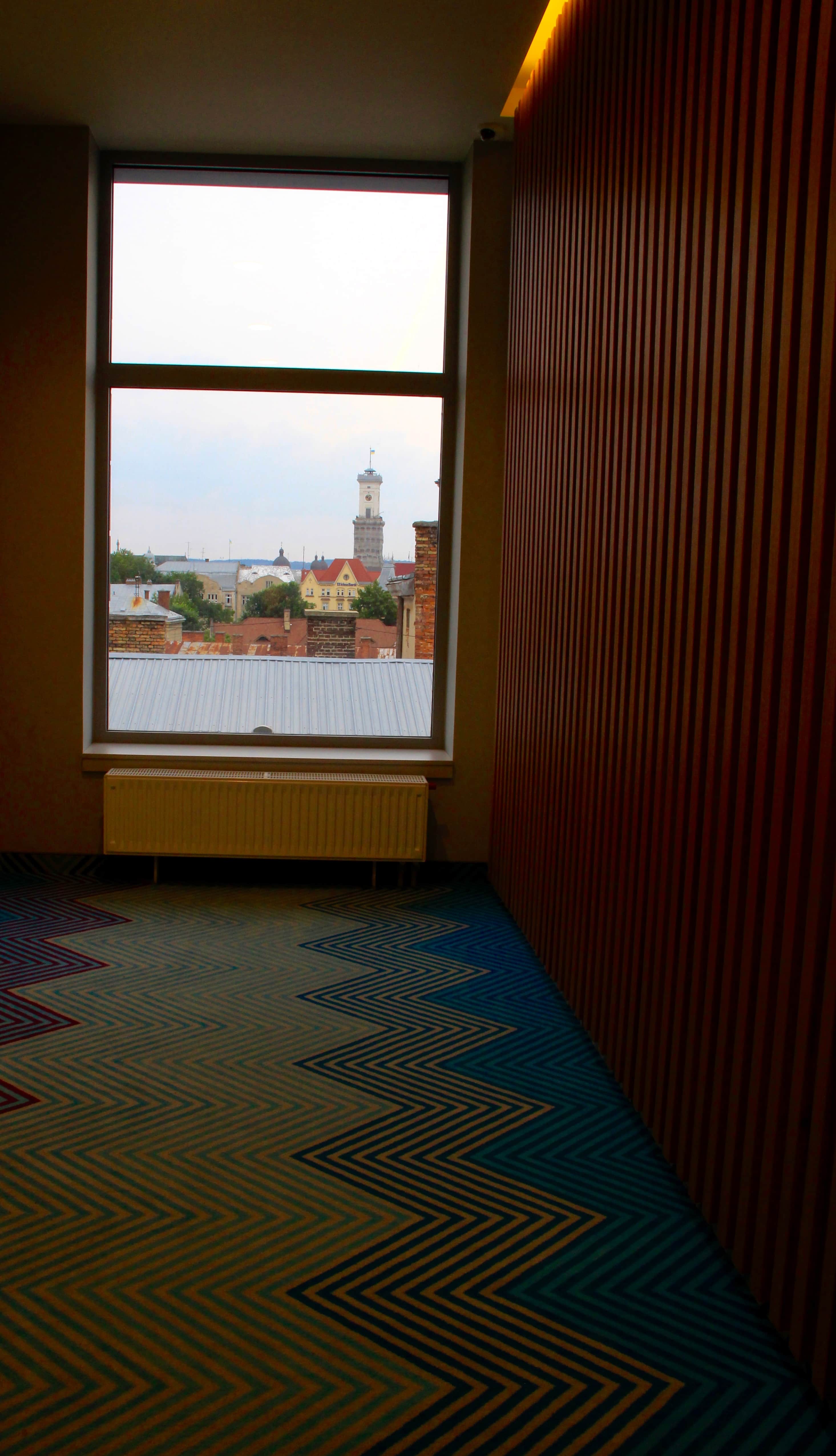 Our room was small, but comfortable. With a double bed, desk, ensuite bathroom, and window with a view, we needed nothing more. 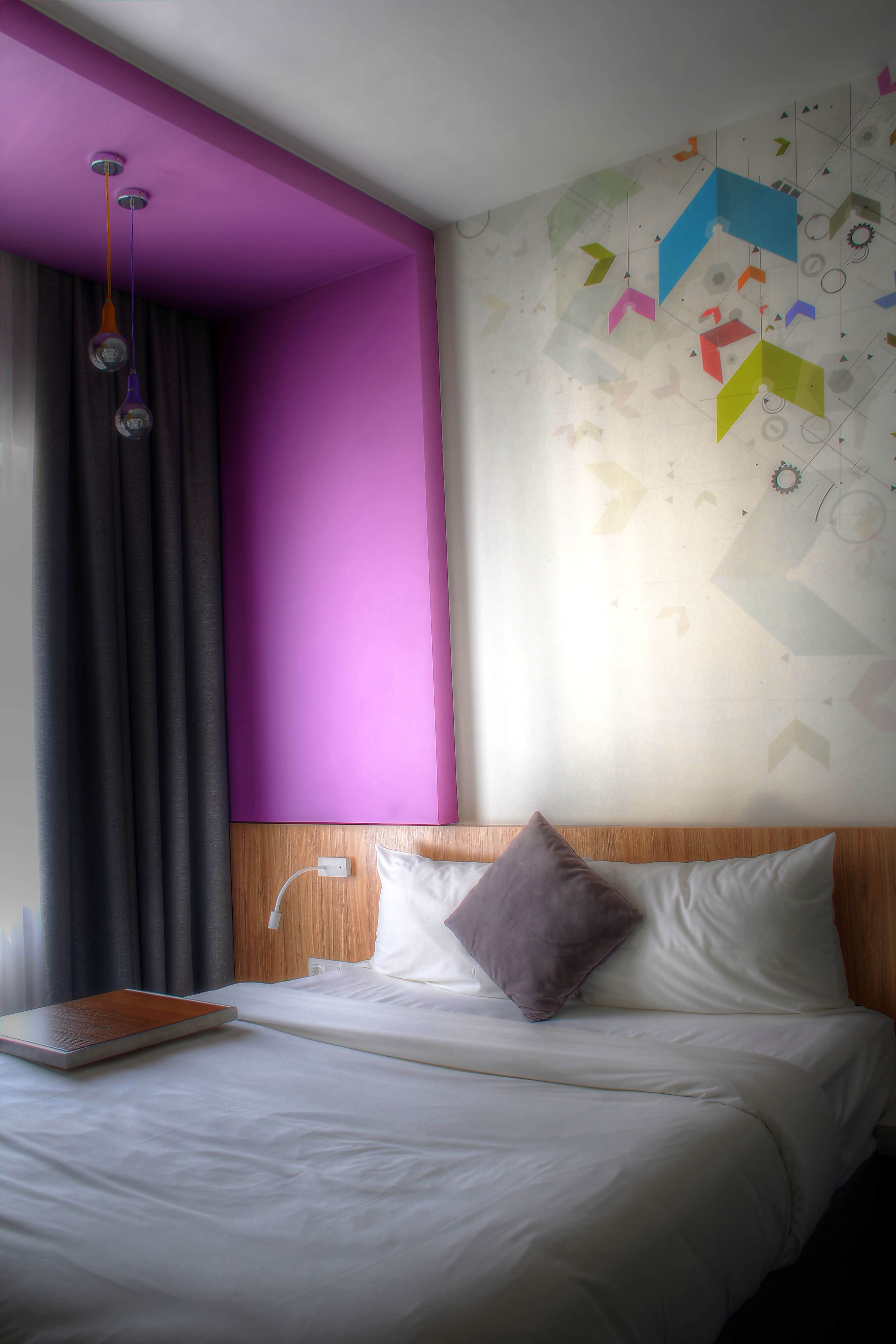 Unfortunately, our trip to Lviv coincided with quite a bit of rain. It was on this first rainy evening, when we didn’t feel like wandering out, that we learned that ibis Styles Center Hotel offers room service…at no extra charge! 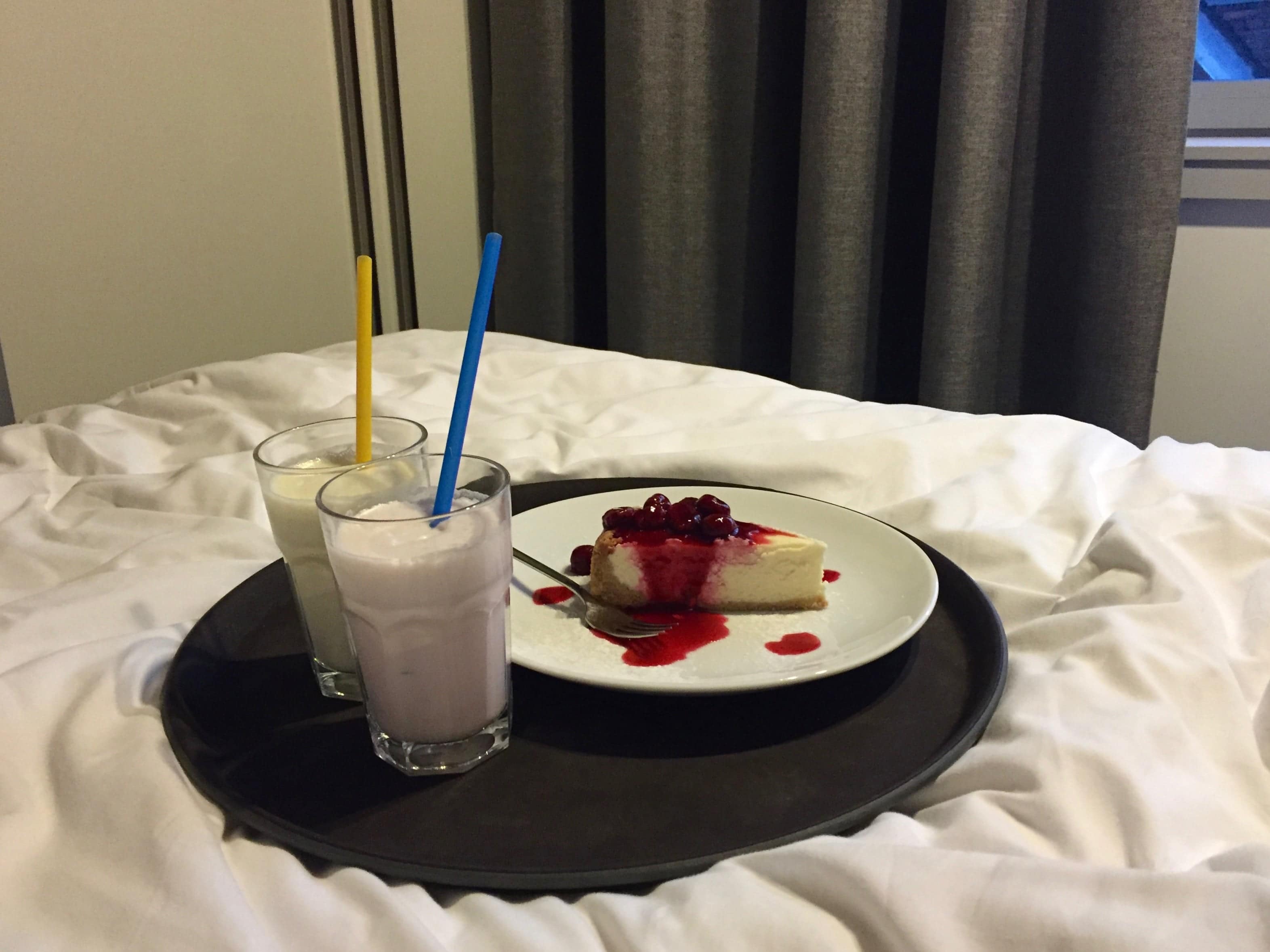 The prices were the exact same, incredibly reasonable, prices as those in the Italian restaurant below. I have never stumbled upon a hotel that had no extra fees associated with room service, which is just dangerous for a blogger! Needless to say, we may have taken advantage of this every night… 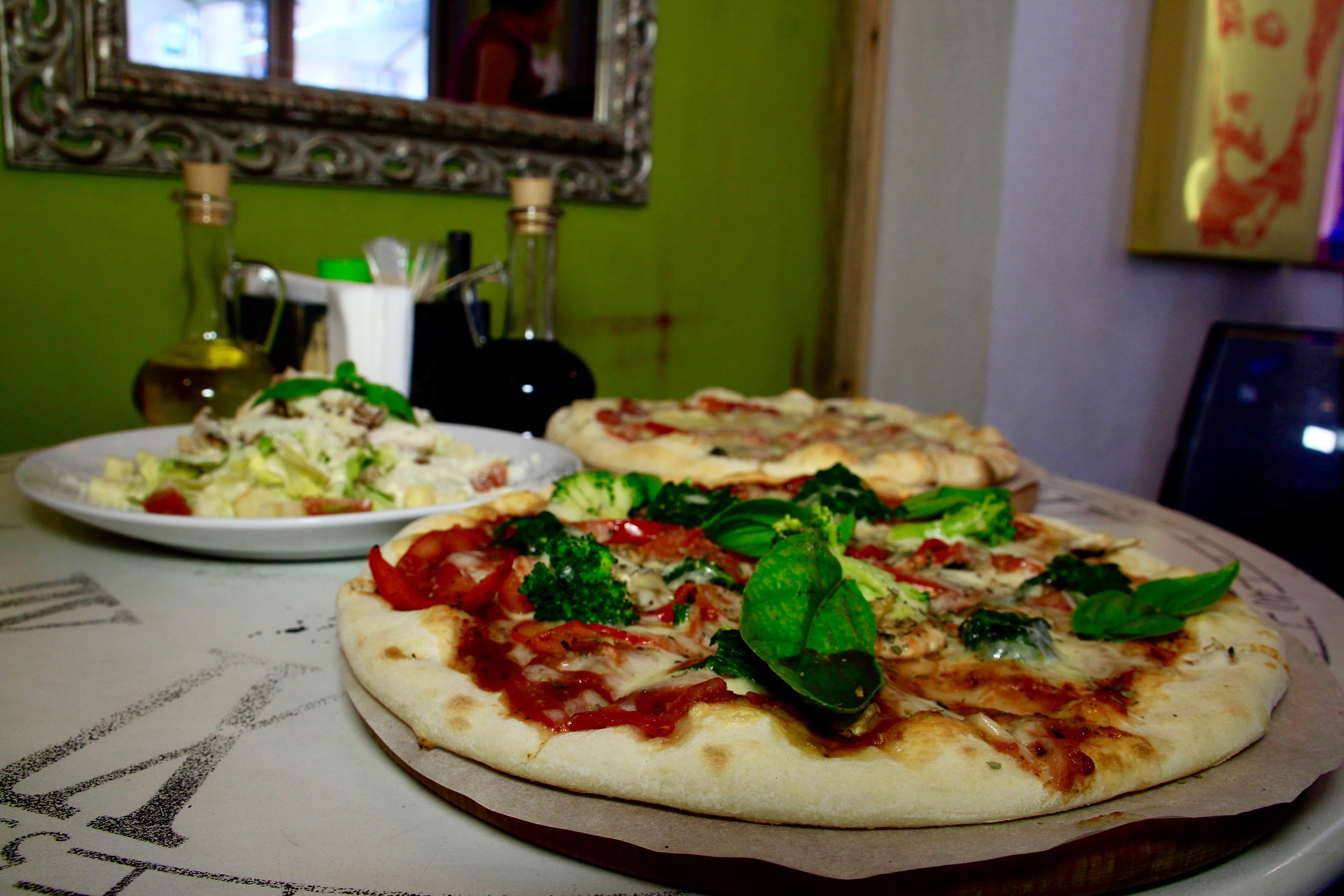 The quality of the food at ibis Styles Center was fantastic and flavorful. This was not only visible during dinner, but during their complimentary breakfast as well. They have quite a few choices from sweet to savory, and you’re bound to leave satisfied. 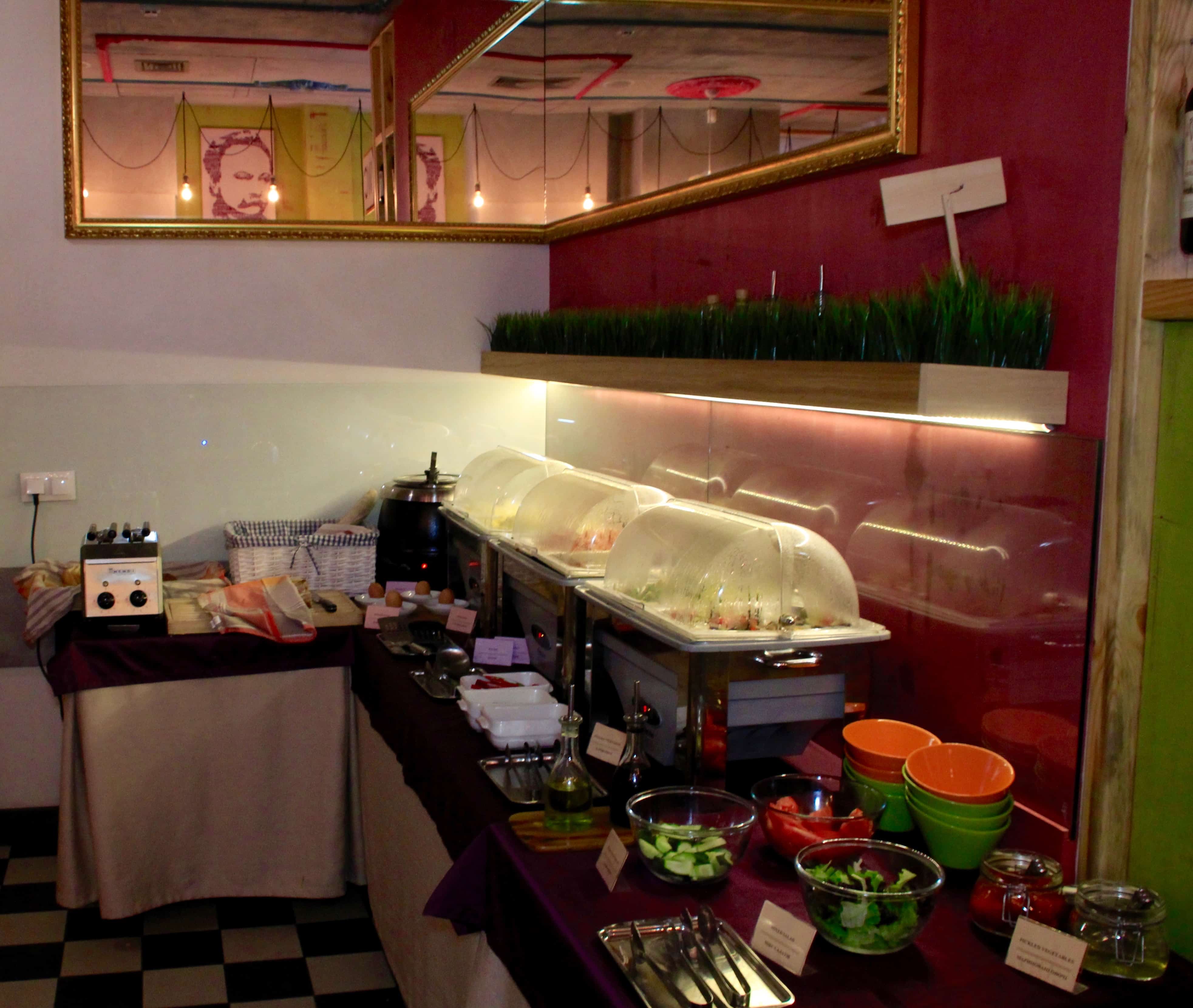 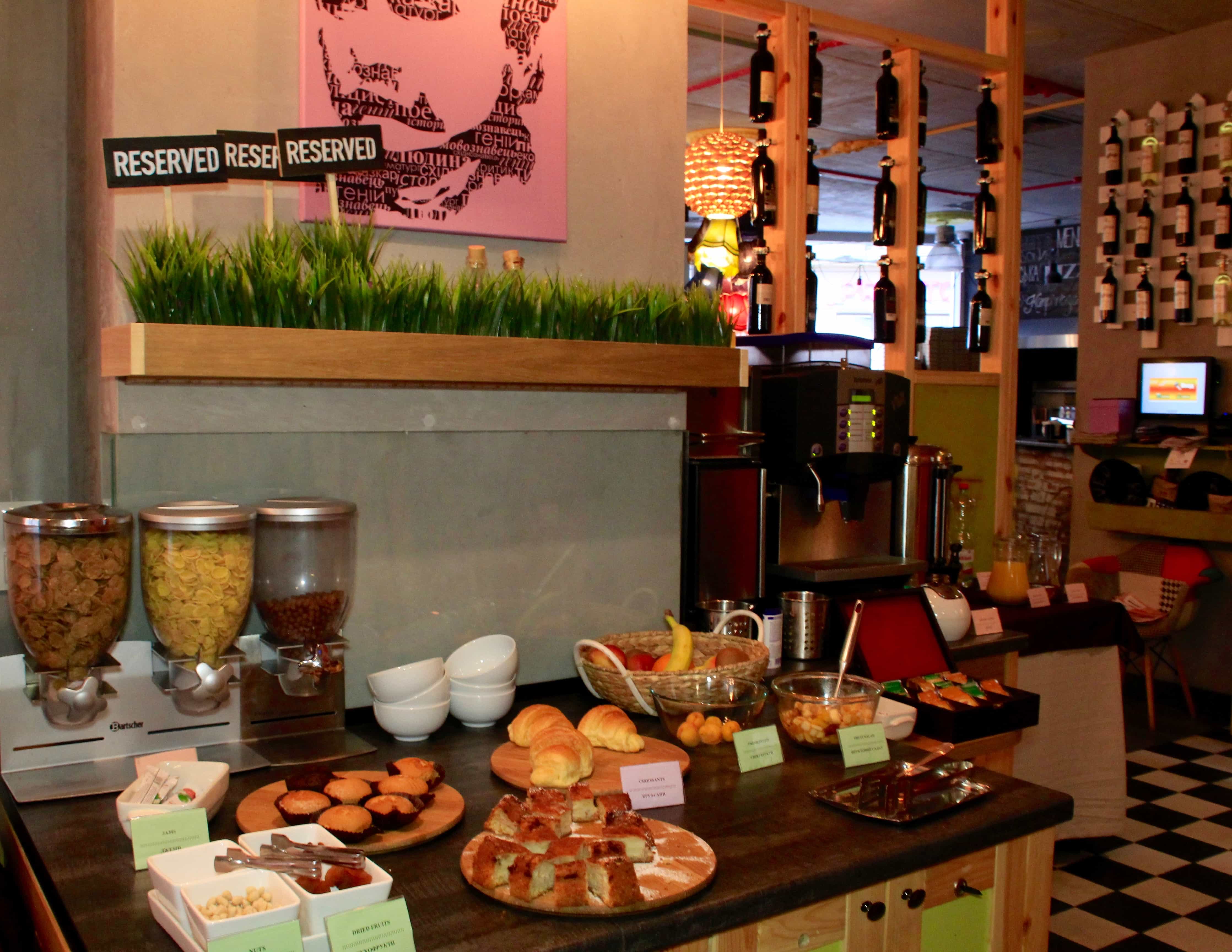 The ibis Styles Center Hotel doesn’t include the word “center” for no reason. It is within walking distance to any site you’d be interested in seeing in Lviv. And, if you aren’t feeling up for walking, the tram stop is directly in front of the hotel!

After many hours exploring this UNESCO-deemed Old Town, it felt great knowing that we were returning to a cozy, conveniently-located hotel. 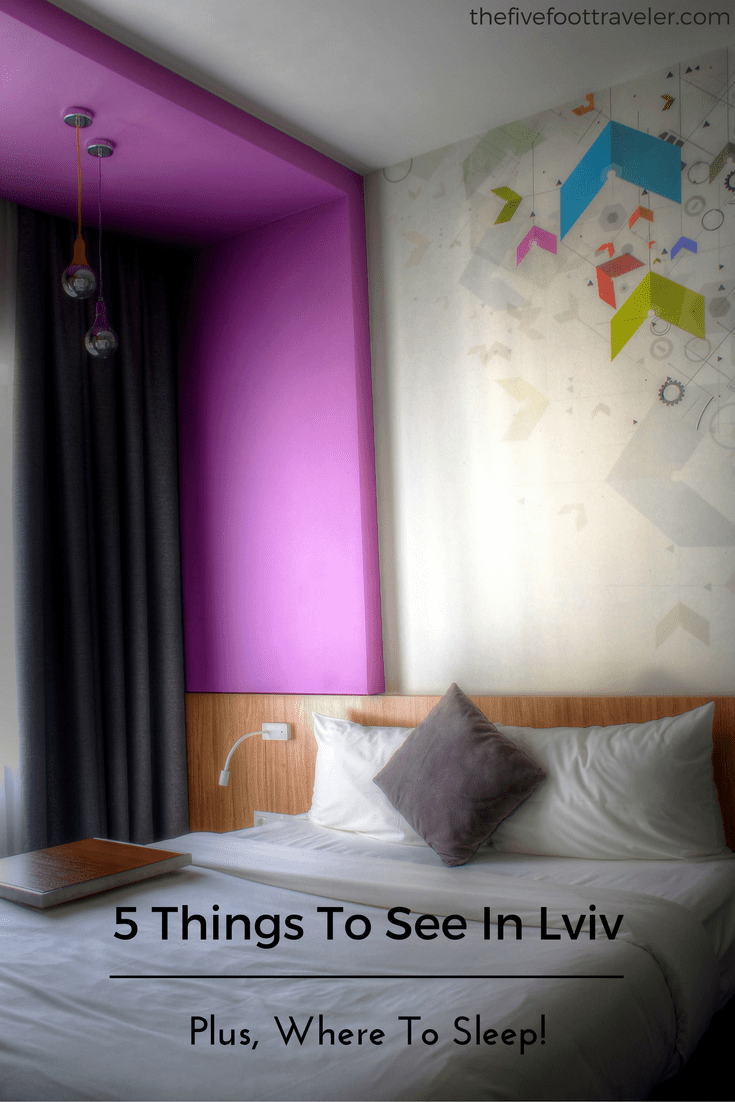