Kyoto very well may be Japan’s most authentic city. Serving as Japan’s capital city and the Emperor’s residence from 794 to 1868, the city hides behind many ancient temples and shrines. While much of Kyoto has been destroyed by fires over the years, many historically significant monuments were left unscathed by World War II. Many think that they need to spend up to a week in Kyoto; the city can be more than adequately covered, however, in about two days. If you want to explore each and every temple and every UNESCO World Heritage Site though, you will need more time. We decided to pick and choose to see the highlights. 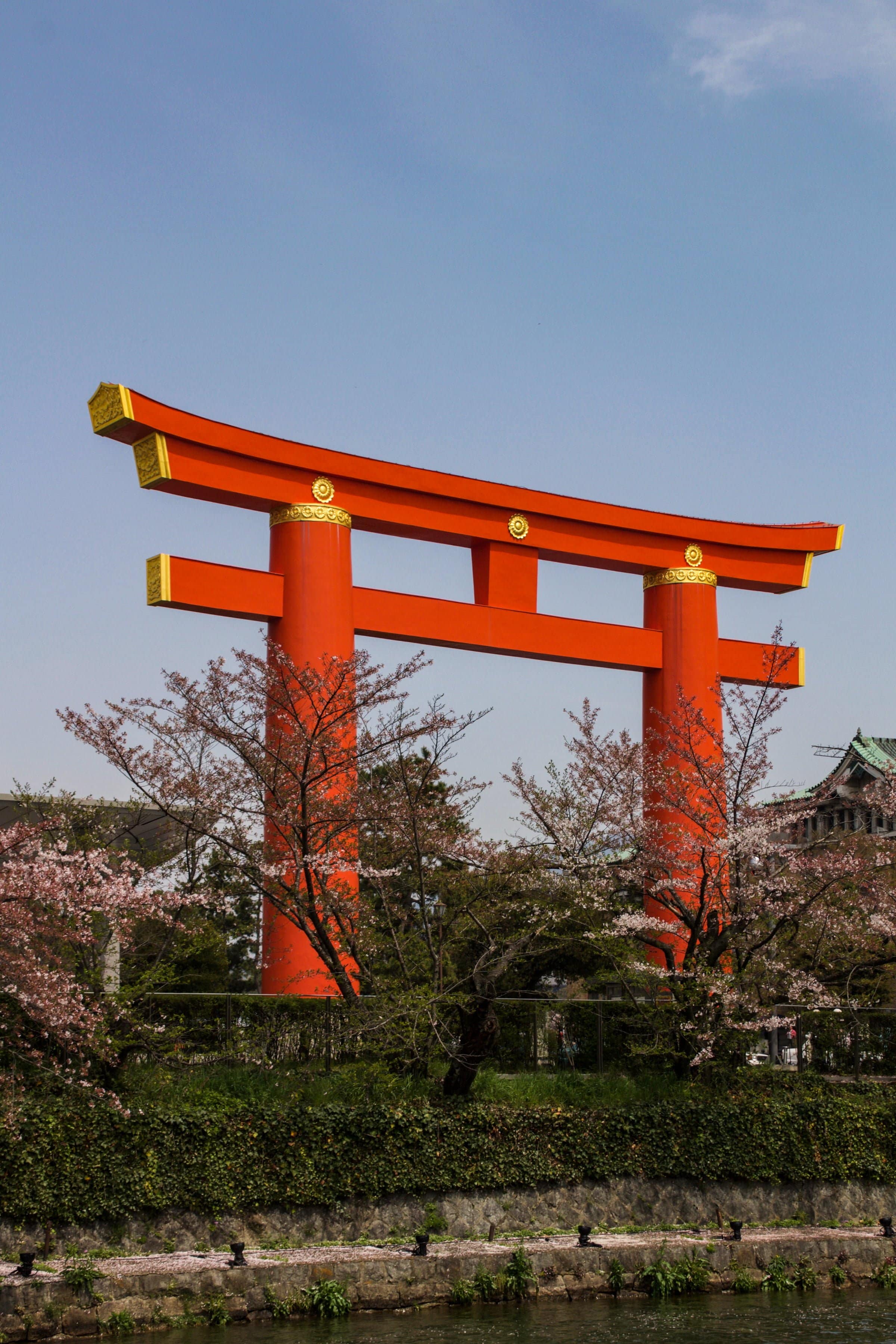 Upon arriving in the sprawling city of Kyoto, don’t be alarmed by the confusing bus system because, in most instances, that is a more practical way to get around than the underground system or Japan Rail (JR) line. Do yourself a favor and buy an all-day bus pass for 500 Yen (5 USD). You can buy this at the tourist information center.

From Kyoto Station take the JR San-ln Line to Arashiyama, better known to us foreigners as the bamboo forest. The ride takes about 45 minutes, as the forest is on the outskirts of the city, but the trip is worth it. There is a nice walking path that takes you right through the bamboo groves; I recommend getting there early, however, to avoid the crowds. 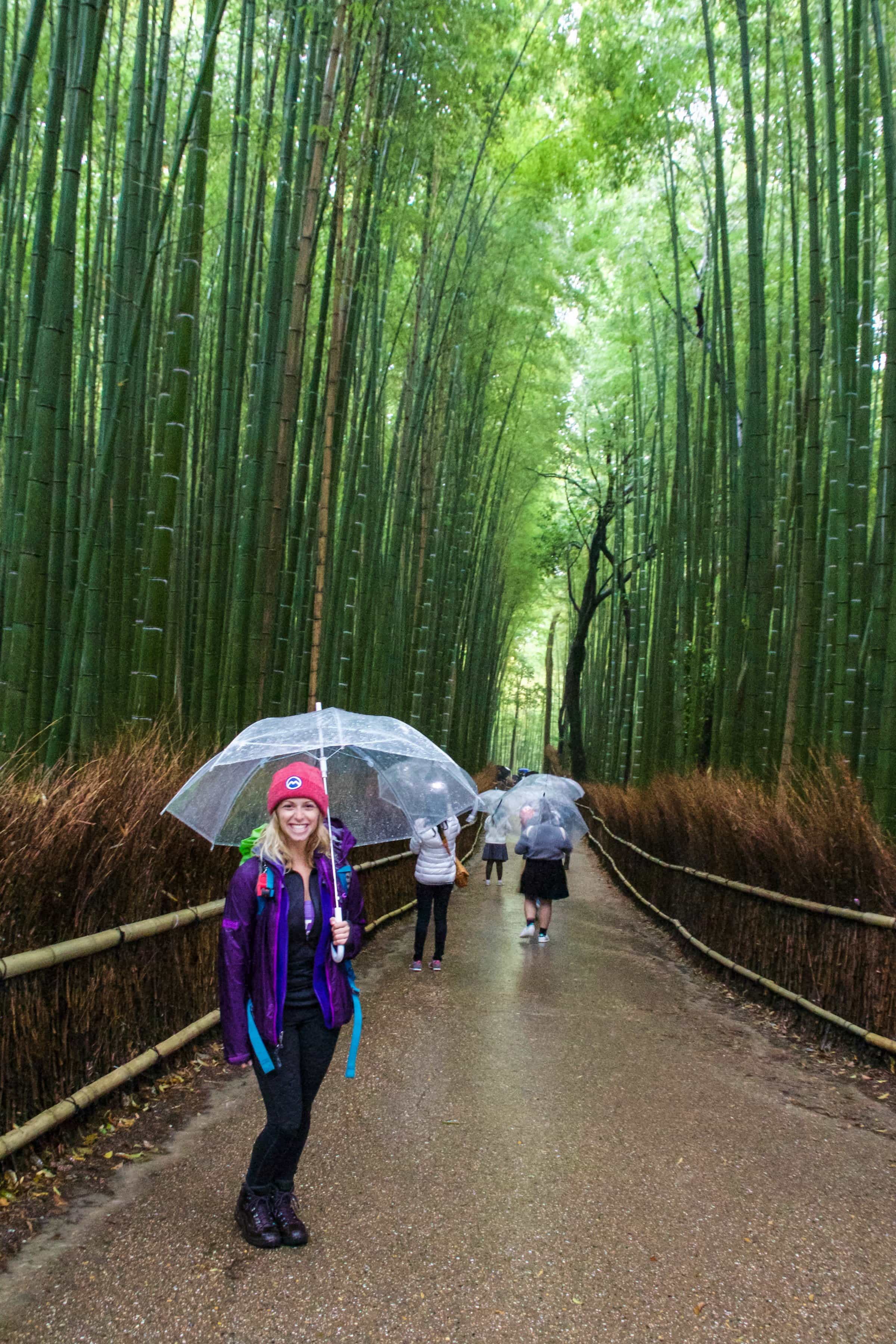 We arrived around 11am on a rainy day, and it was still quite crowded. To see the lovely bamboo shoots swaying up high in the breeze, so close to a big city, is something not to be forgotten. 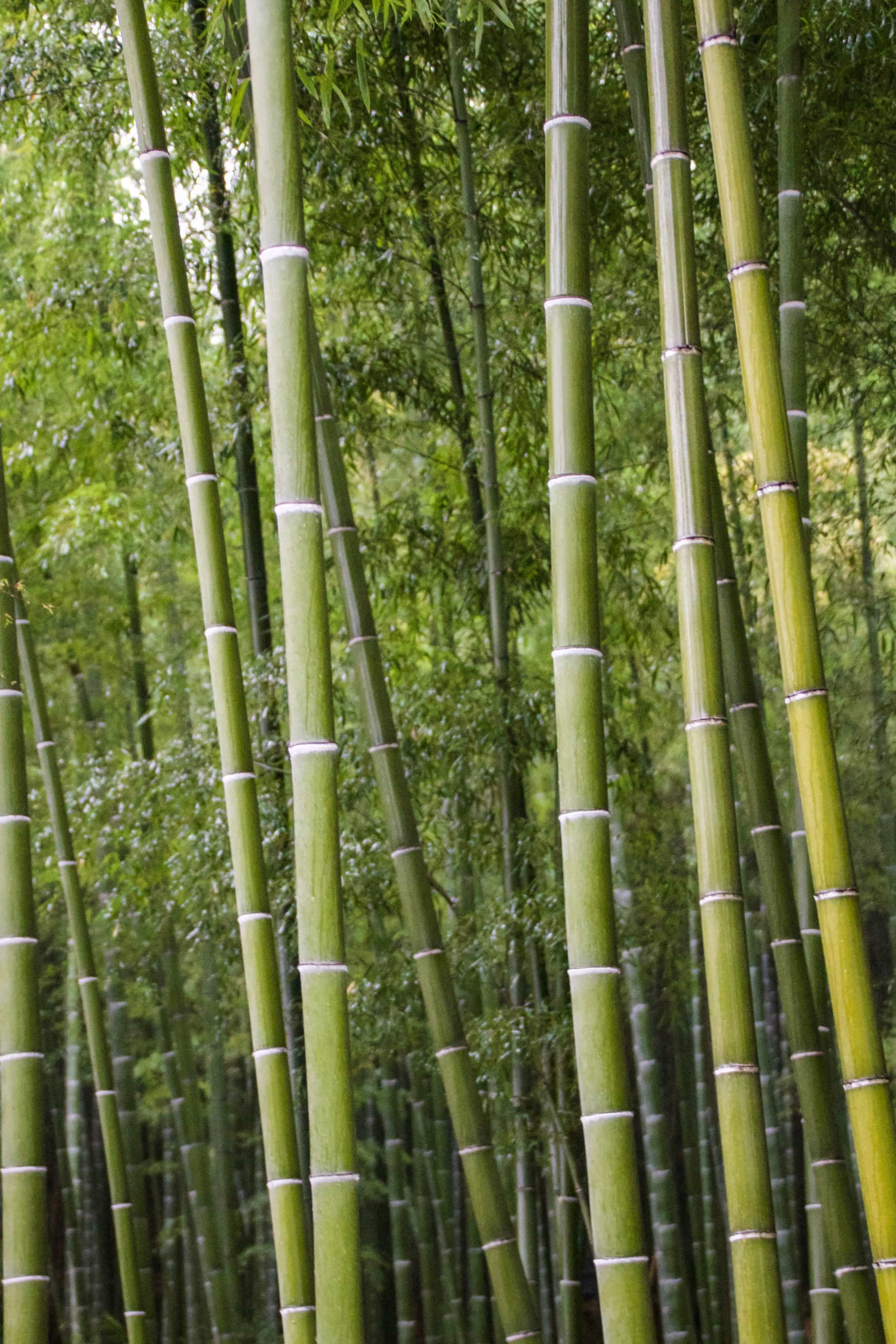 From the Bamboo Forest, take the bus from Arashiyama to Kinkaku-ji in Northern Kyoto. The bus runs every twenty minutes and will take about an hour. Kinkaku-ji, also known as the Golden Pavilion, shines even on a rainy day. 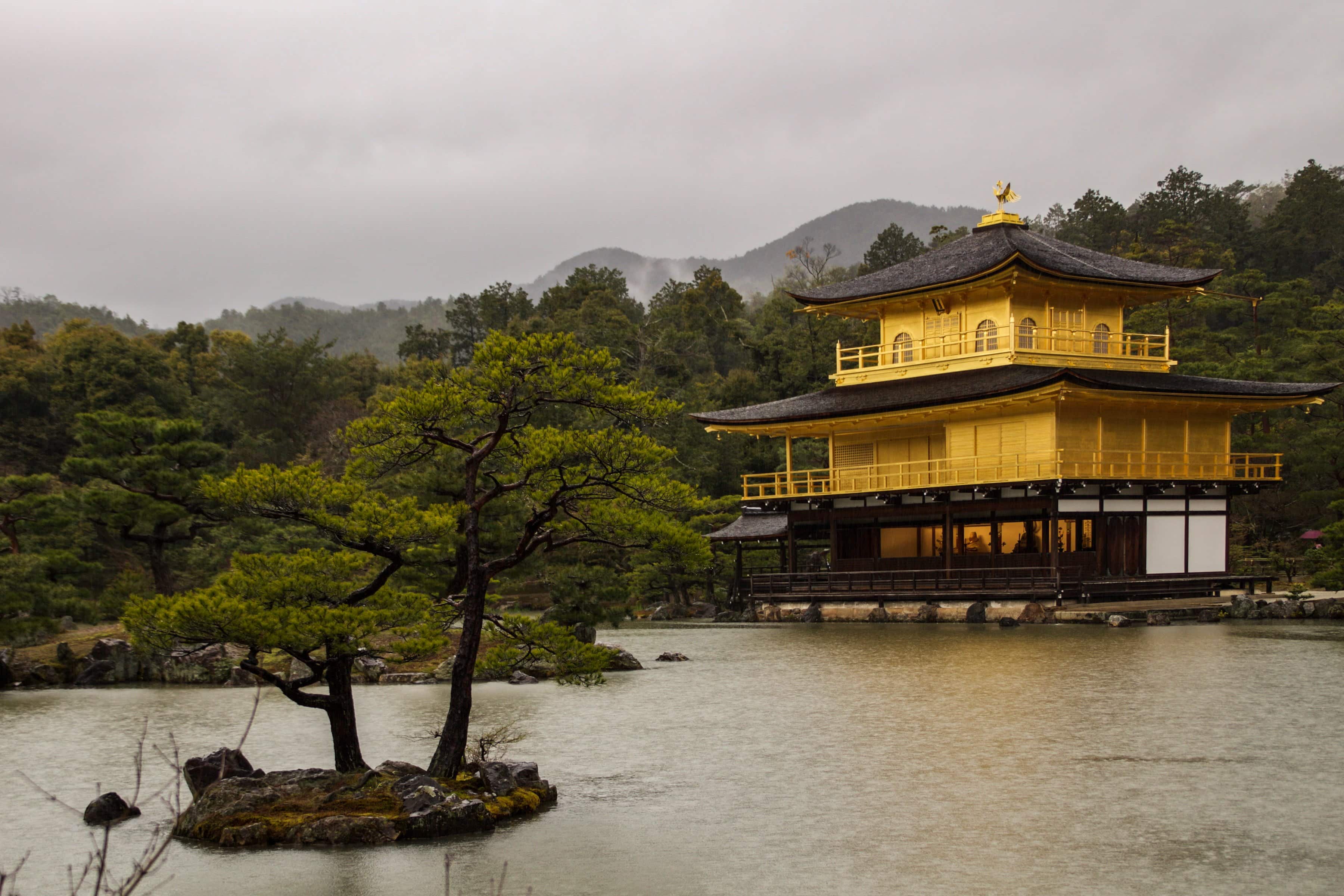 Originally built in 1393, this Zen Temple is known for its two gold-leafed floors. Unfortunately, Kinkaku-ji has burned down numerous times, with the most recent being in 1950, but has remained unscathed since its most recent renovation in 1955. Stroll around the premises and wander through the temple’s gardens (which have retained their original design), allowing views of Kinkaku-ji from every angle. 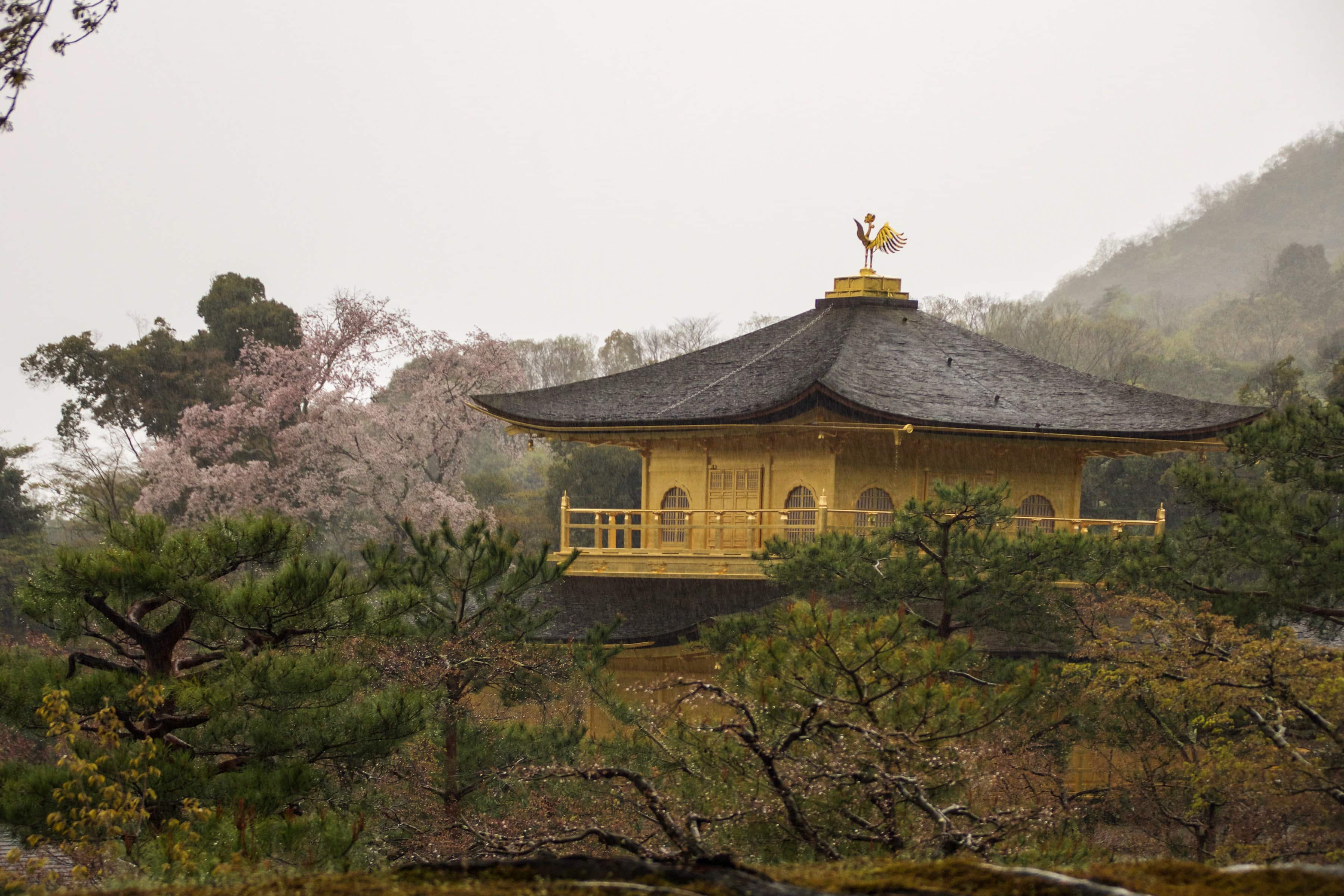 Although we were cold and sopping wet, we wanted to make one final stop for the day at the Fushimi Inari Shrine. From Kinkaku-ji, we took a bus (that comes every 15 minutes) to Kyoto Station, transferred to the JR Nara Line, and got off at the Inari Station. Known for thousands of red torii gates, this iconic Shinto Shrine in Southern Kyoto is not to be missed when visiting Kyoto. Walk through the Romon Gate and feel like you’re stepping back in time. 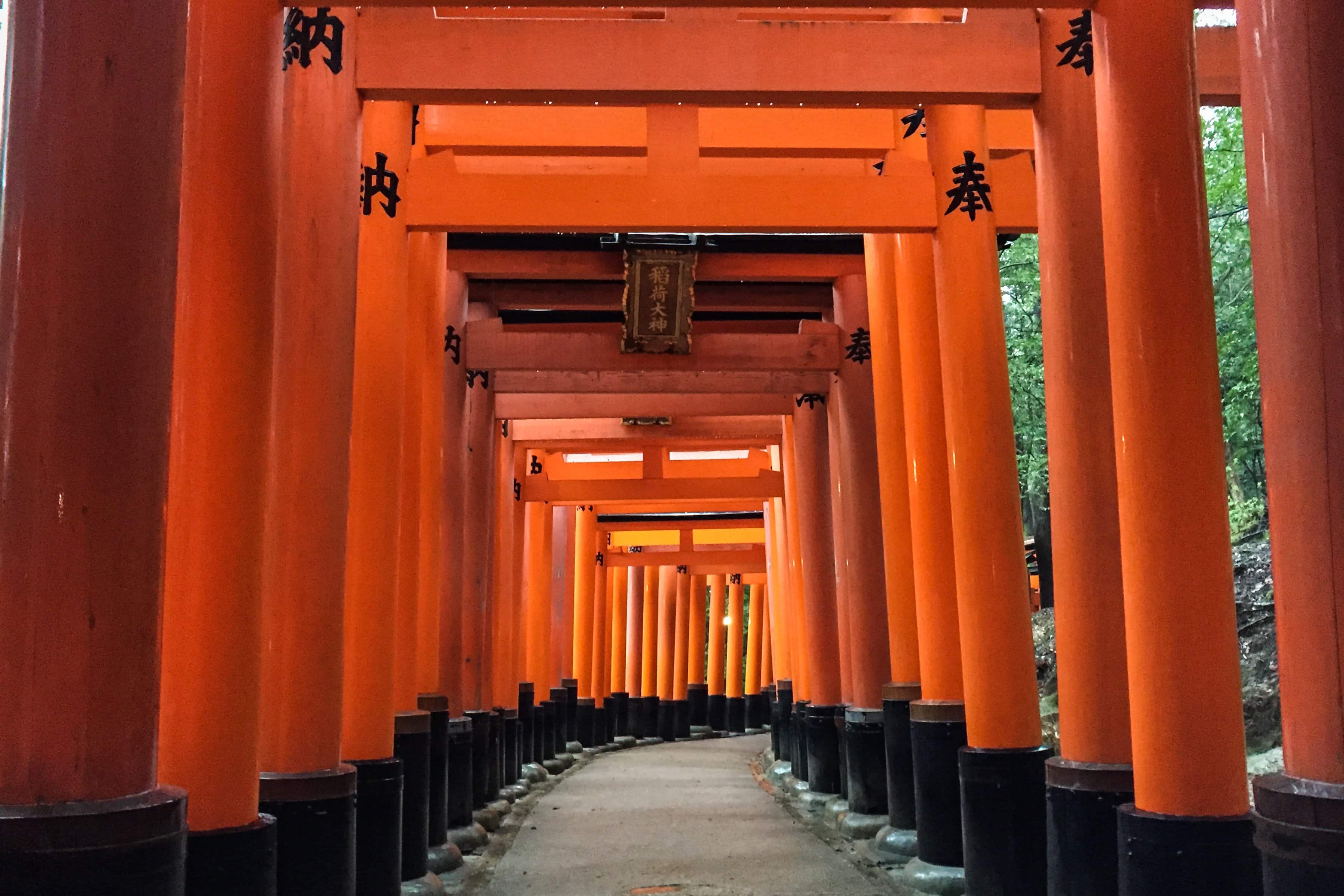 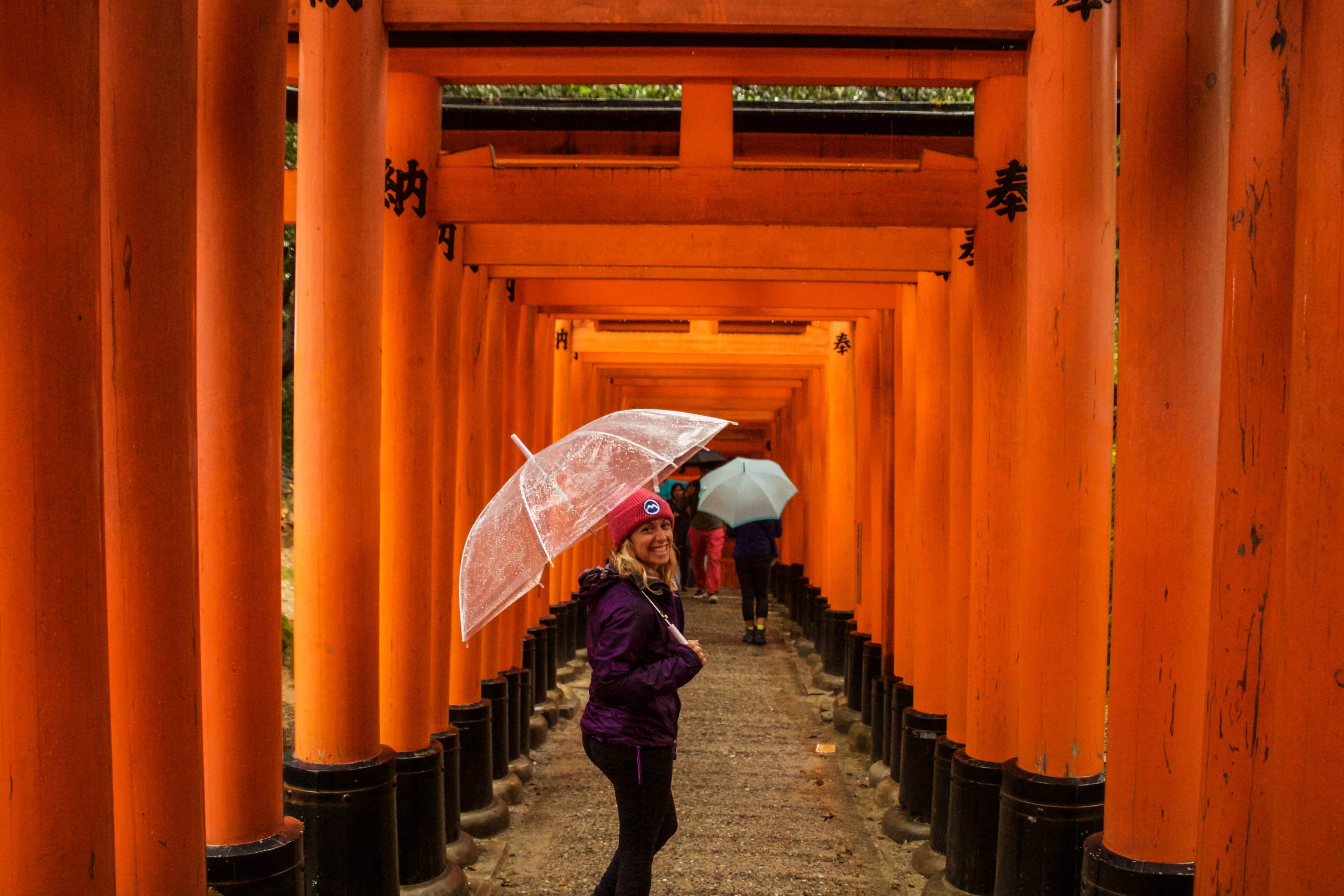 Unbeknownst to me, if you continue following these gates, you will be led up Mt. Inari, which offers sweeping views of Kyoto. After much time wandering the premises, we decided not to continue the climb up to the top as we were cold, wet, and tired. While exploring, you’re bound to find many fox statues; foxes are thought to be messengers of Inari, the god of rice. The earliest structure in this complex was built in 711 on Inariyama Hill before being moved to Mt. Inari in 816. Since then, torii gates were continually added by individuals or companies — and for quite a nice price tag too! The Japanese kanji (characters) that you will see inscribed on each torii gate presents the name of the donor and the date it was donated. 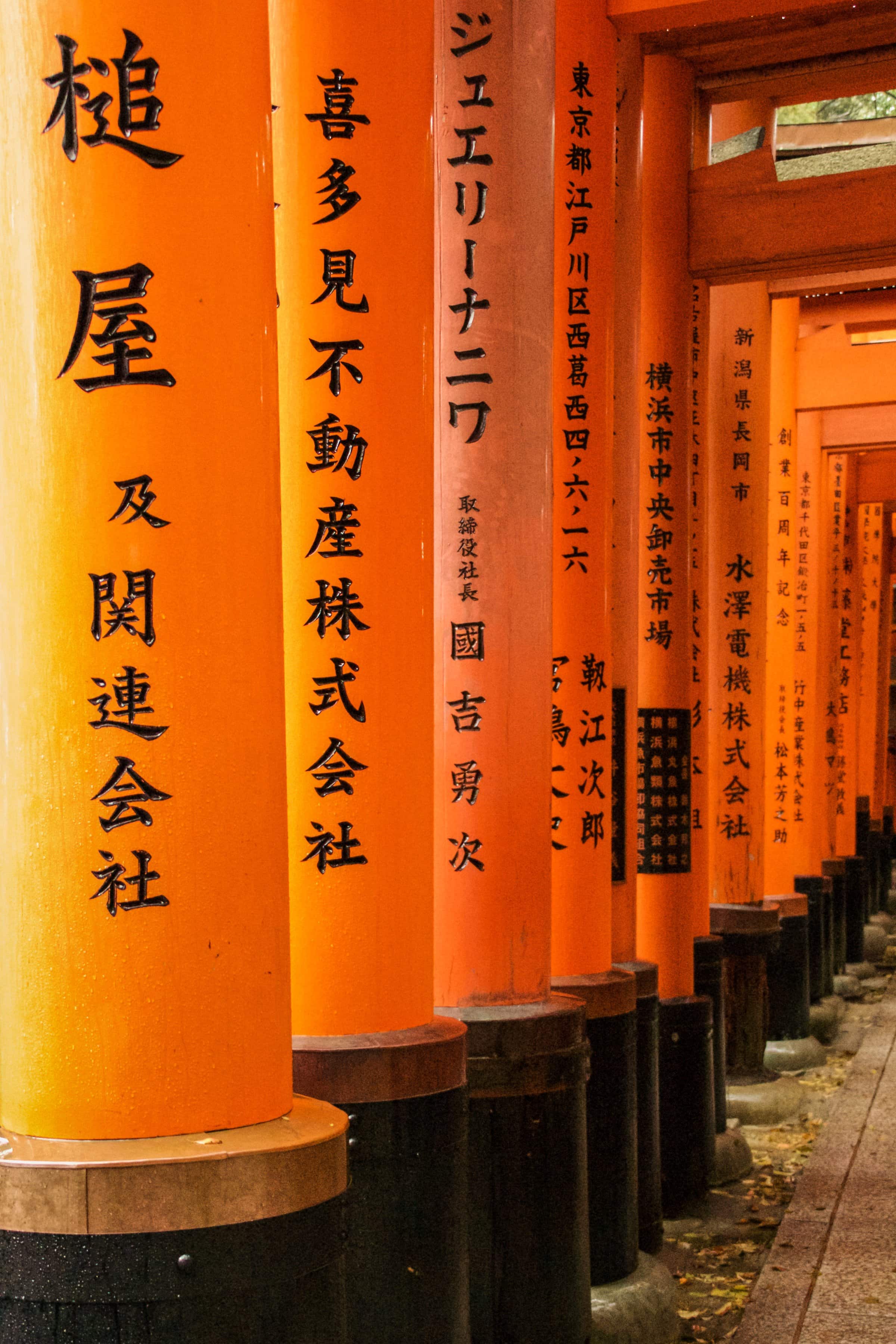 We knew that Arashiyama, Kinkaku-ji, and the Fushimi Inari Shrine were the three sights on the outskirts of Kyoto that we wanted to see. In needing to factor in about an hour of transportation between each location, and the length of time spent at each site, we decided to spend a full day navigating these three sites only. Who knew how long it took to get between sites in Kyoto?! 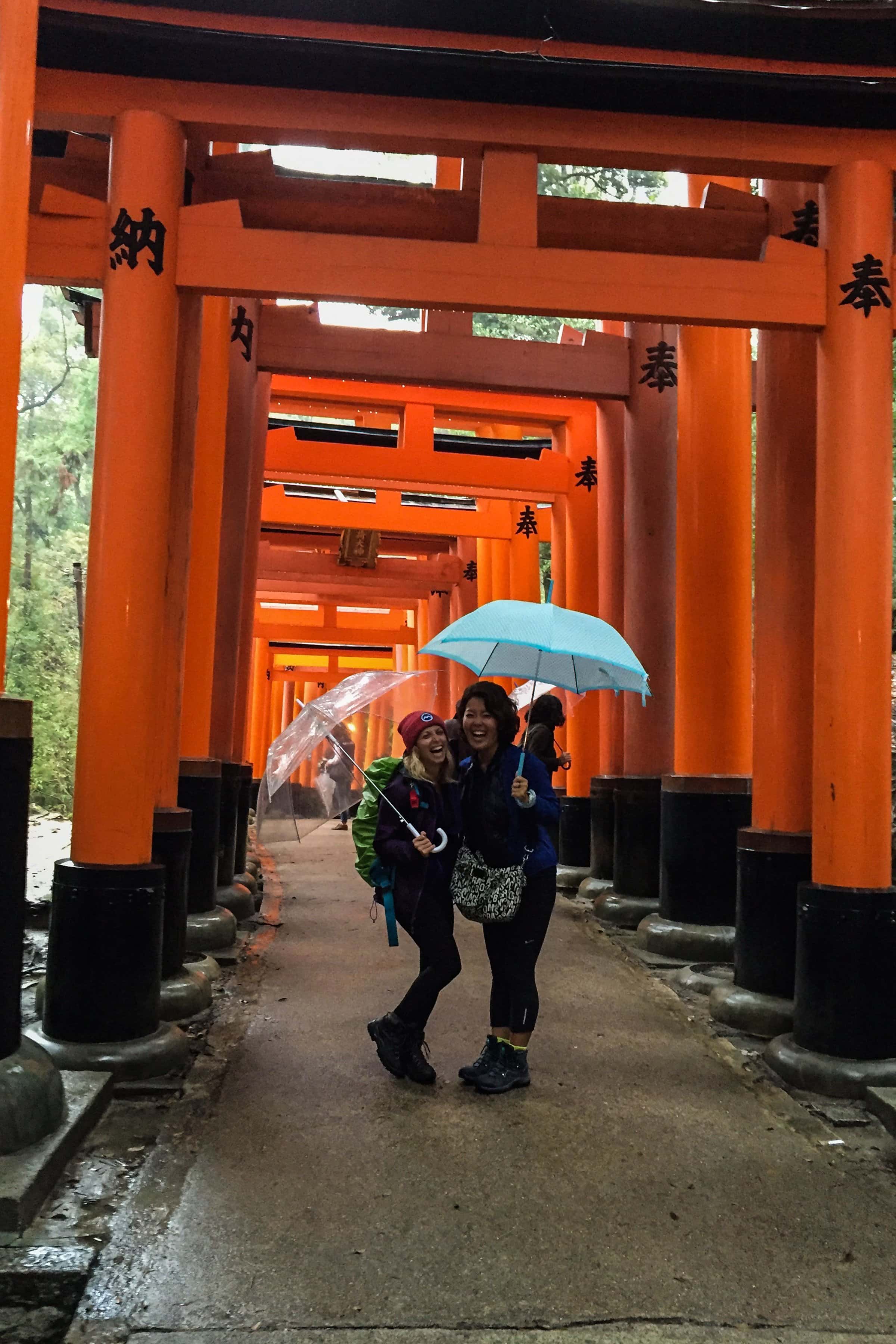 For our second day in Kyoto, we decided to spend most of our time in the Gion district, famous for a cluster of UNESCO World Heritage Sites and geisha sightings. As with the previous day, buy yourself an all-day bus pass and hop on bus 100 or 206 from Kyoto Station to Gion; the trip takes about 25 minutes.

Arguably one of the most famous shrines in Kyoto, the Yasaka Shrine (also known as the Gion Shrine) is over 1350 years old. It is not a huge complex, however, as the inner sanctuary and offering hall have been combined into one building. 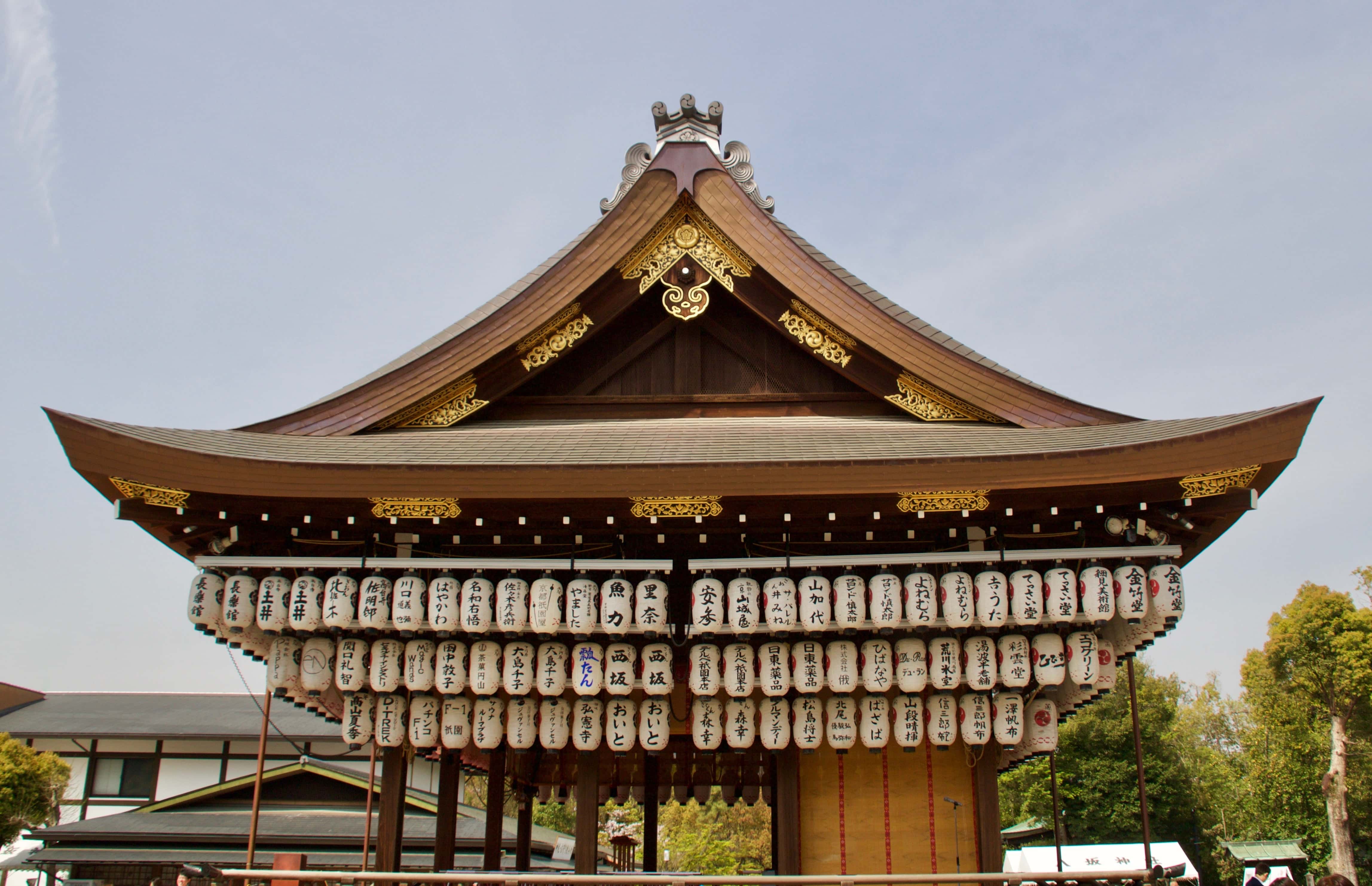 Once you walk through the Yasaka Shrine, you will find yourself in Maruyama Park. At first we were quite confused because we didn’t acknowledge the transition from Yasaka Shrine to Maruyama Park, and so we didn’t understand why there were so many street vendors in what we thought was a sacred place. 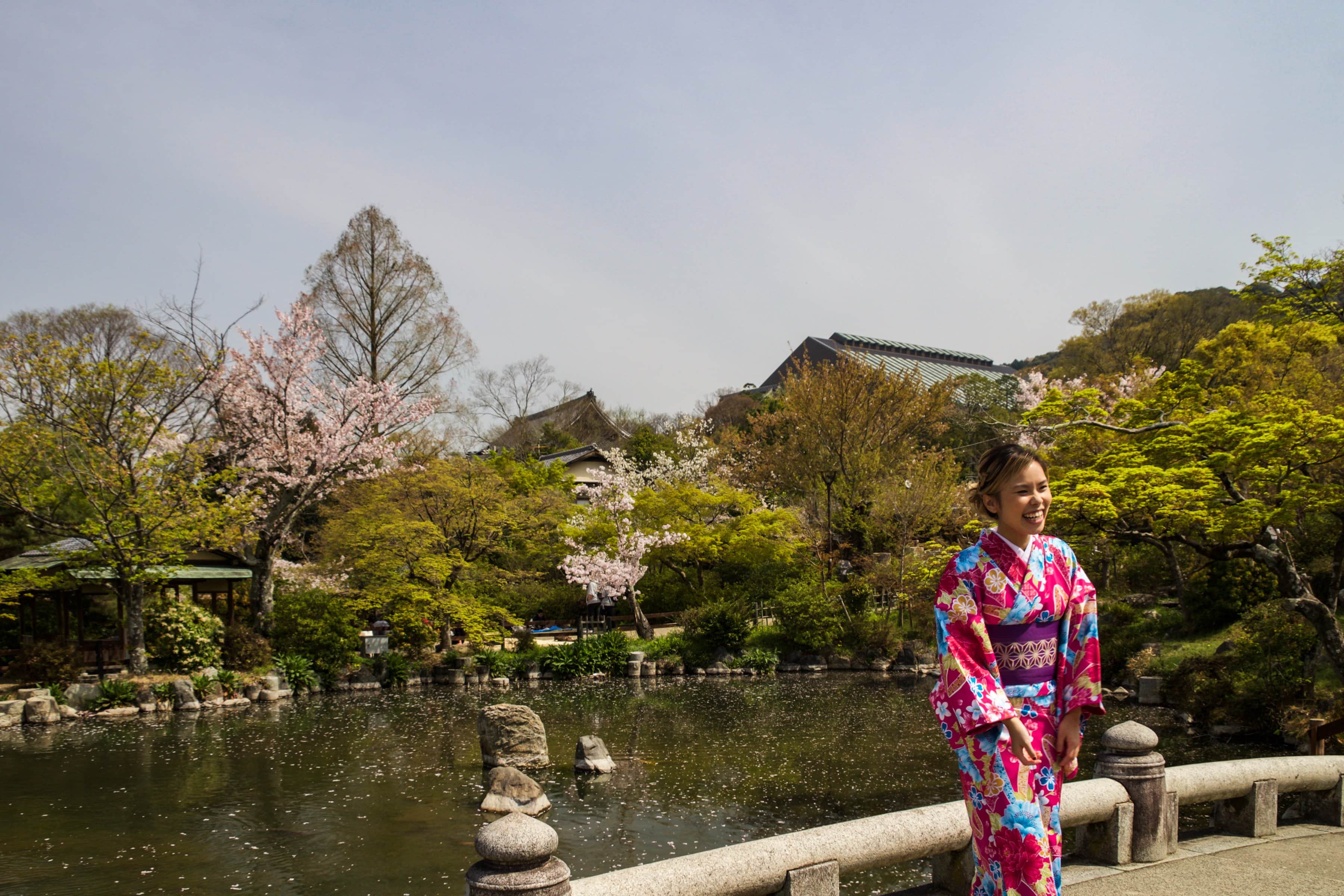 The park itself is absolutely beautiful and was filled with tons of cherry trees in full bloom when we visited. 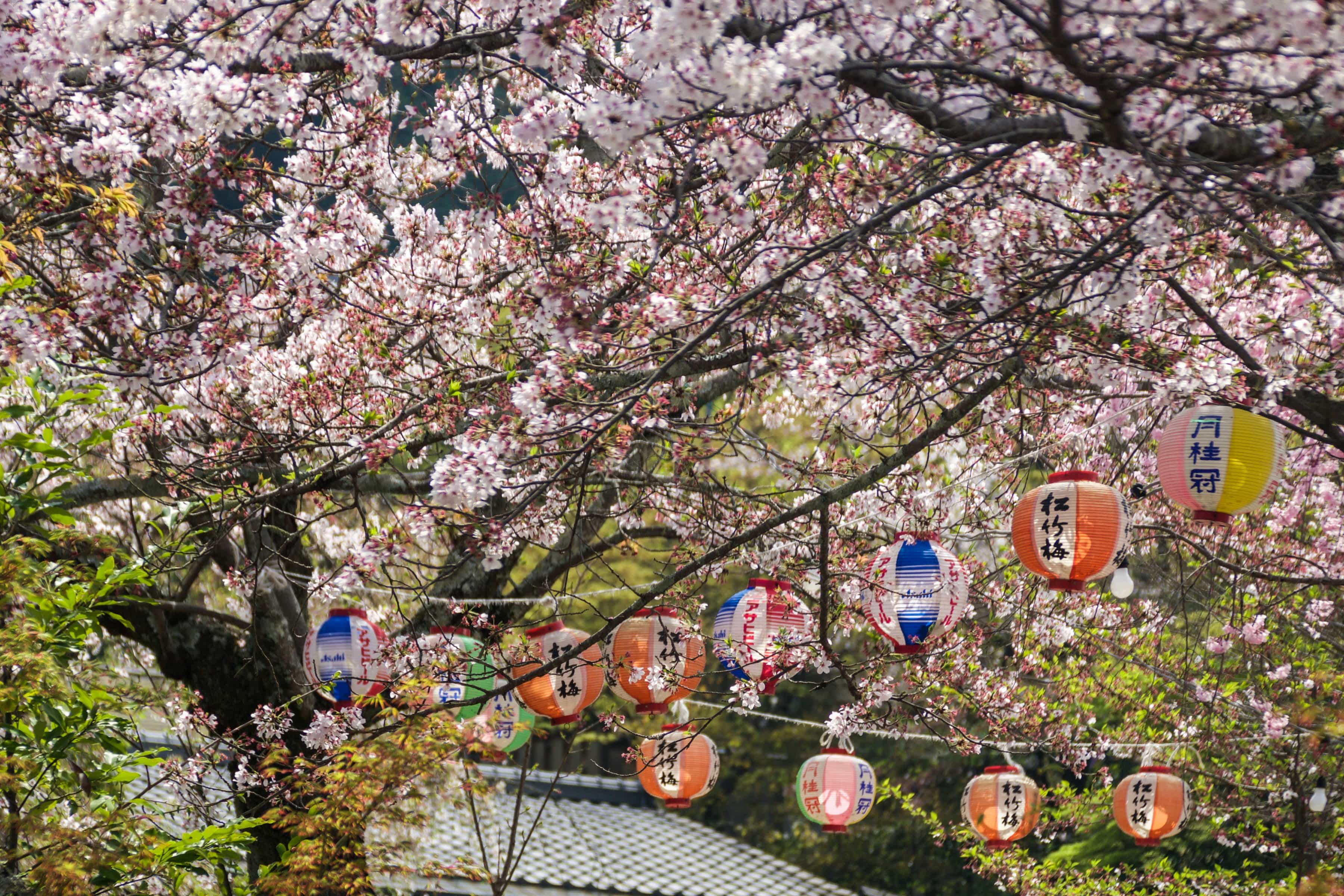 Not originally on our list of places to visit, I’m so happy we accidentally strolled past the Heian Shrine and decided to check it out. 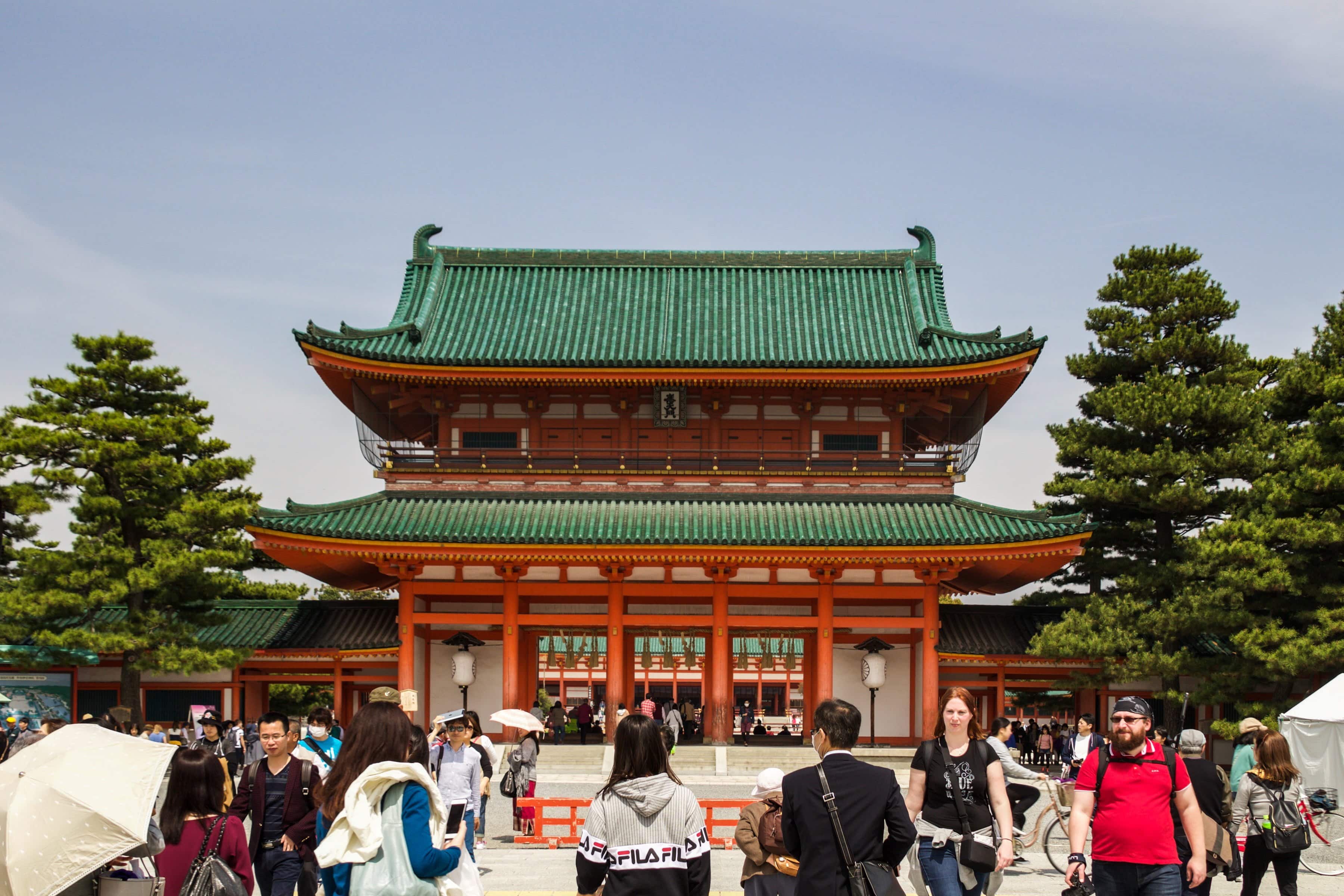 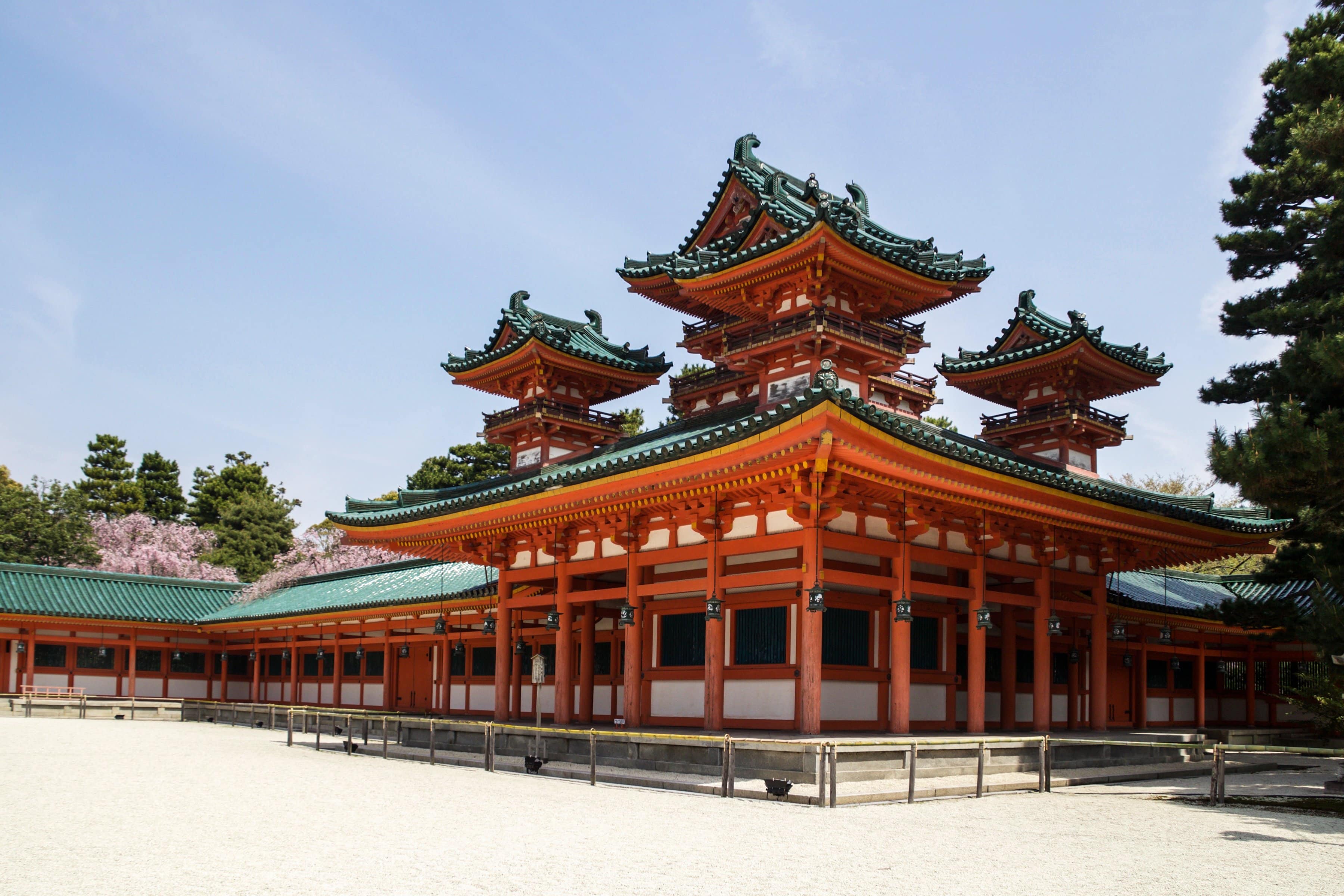 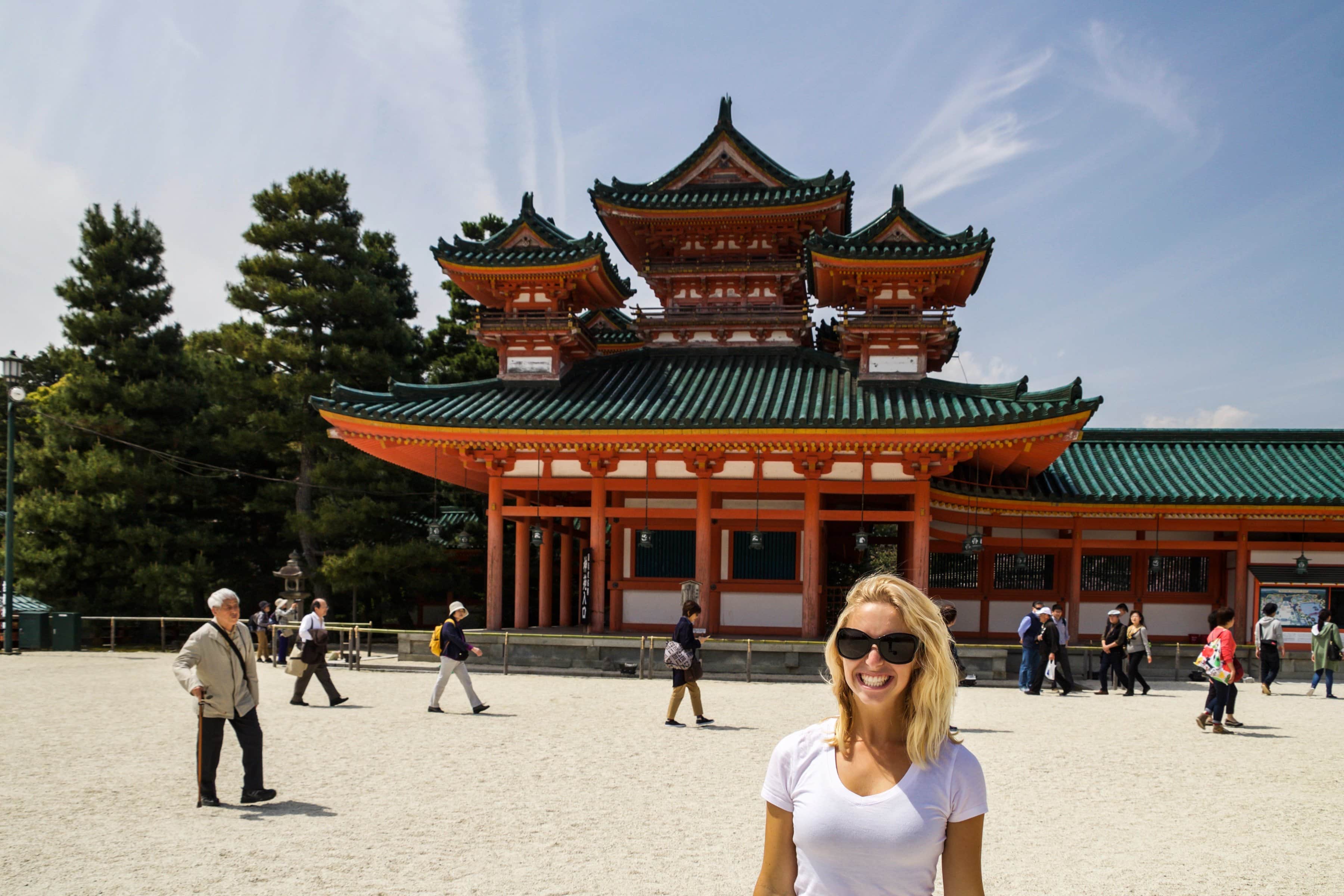 While there is a huge torii gate and some beautiful buildings replicating the original Heian Imperial Palace, the most astonishing aspect of the Heian Shrine is the garden! Access to the Japanese Garden costs 500 Yen (5 USD) and is completely worth it, particularly during cherry blossom season! Take a look… 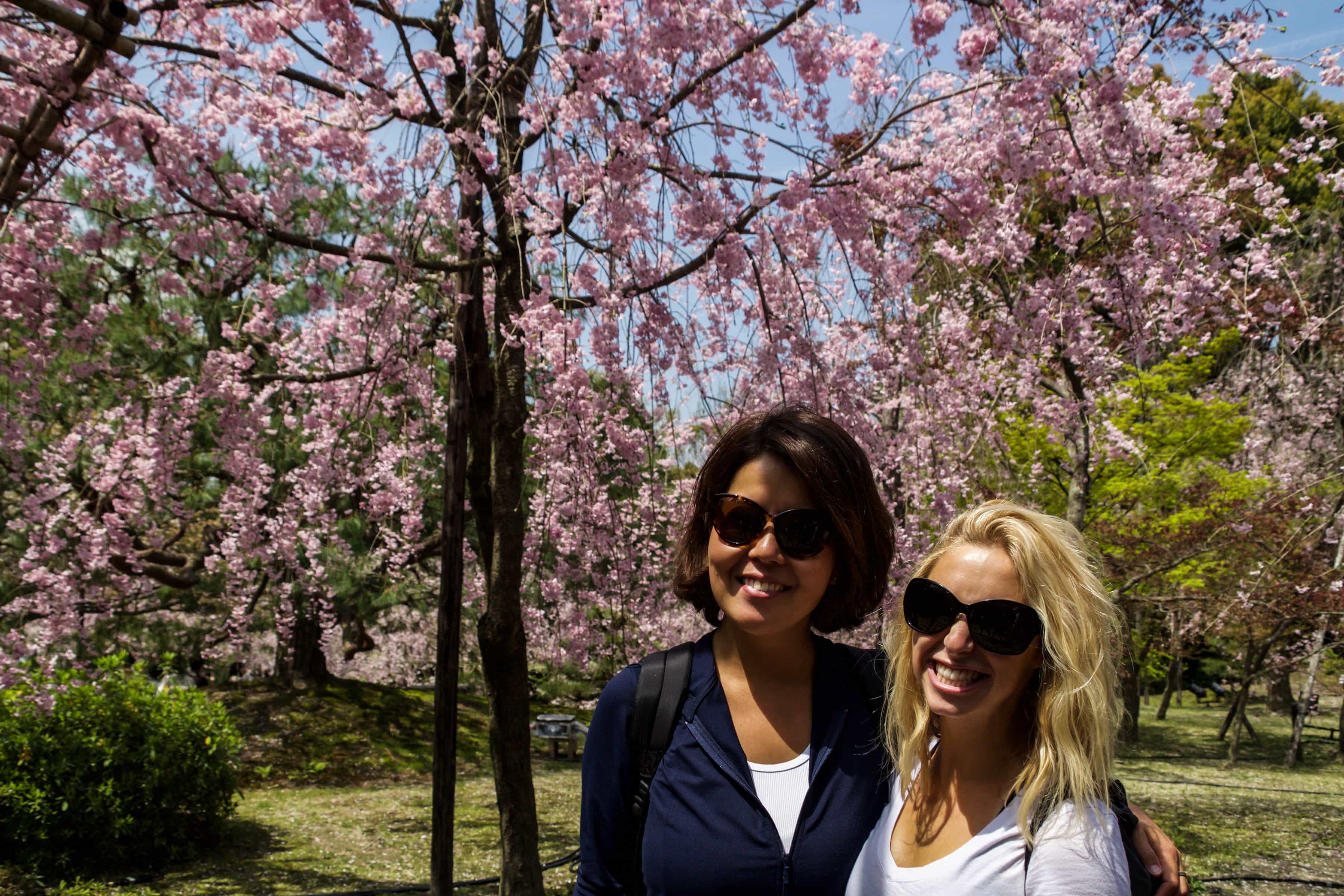 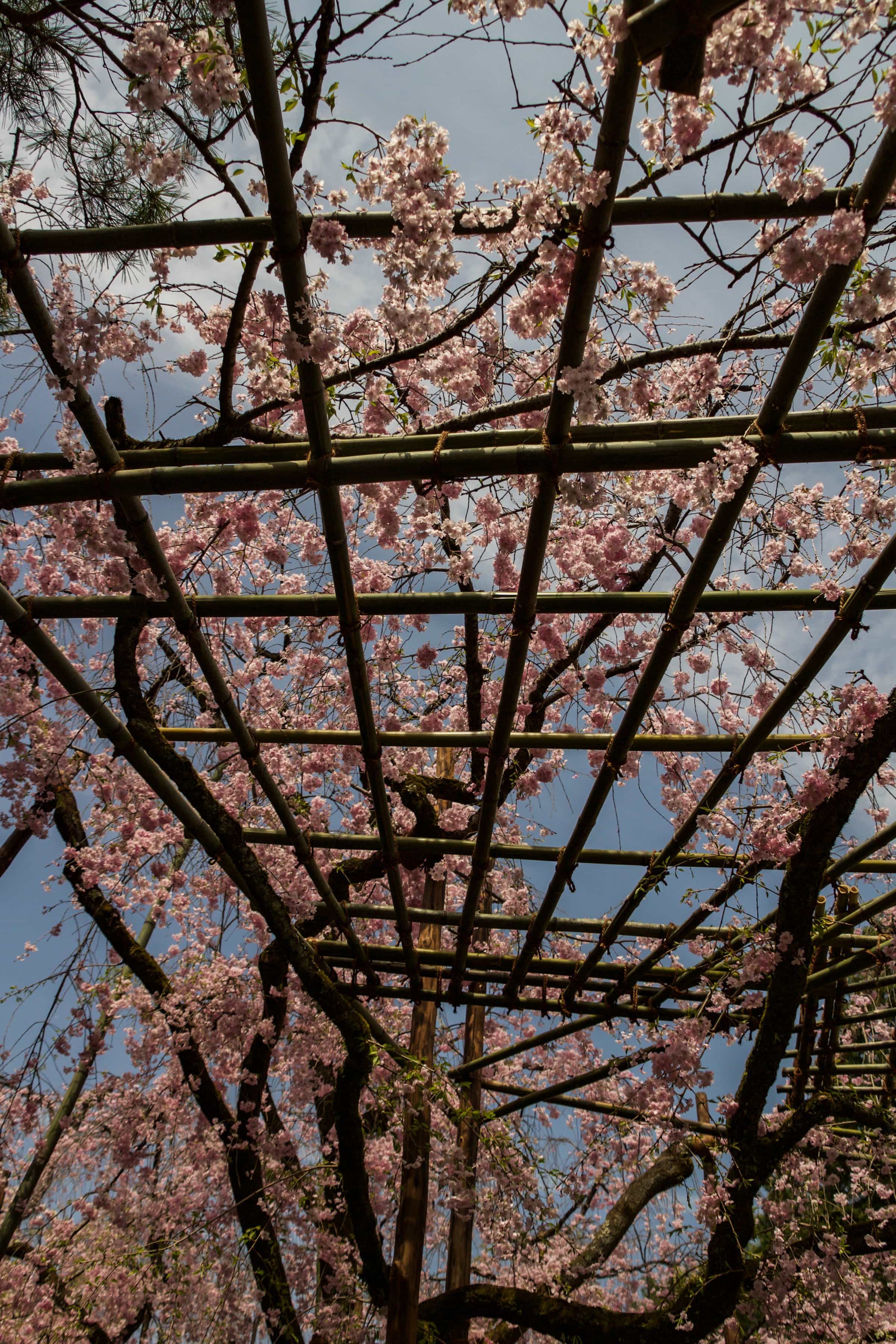 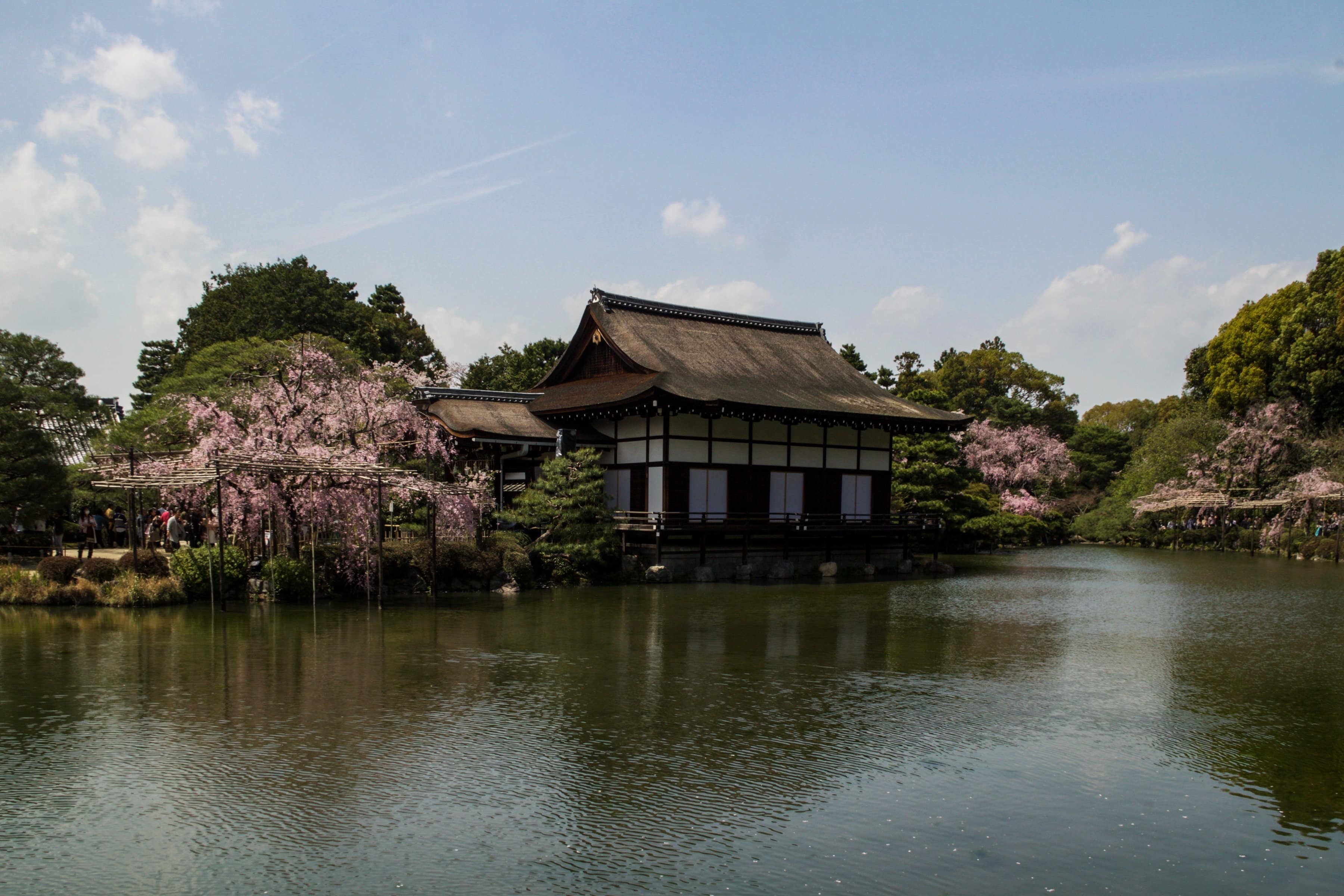 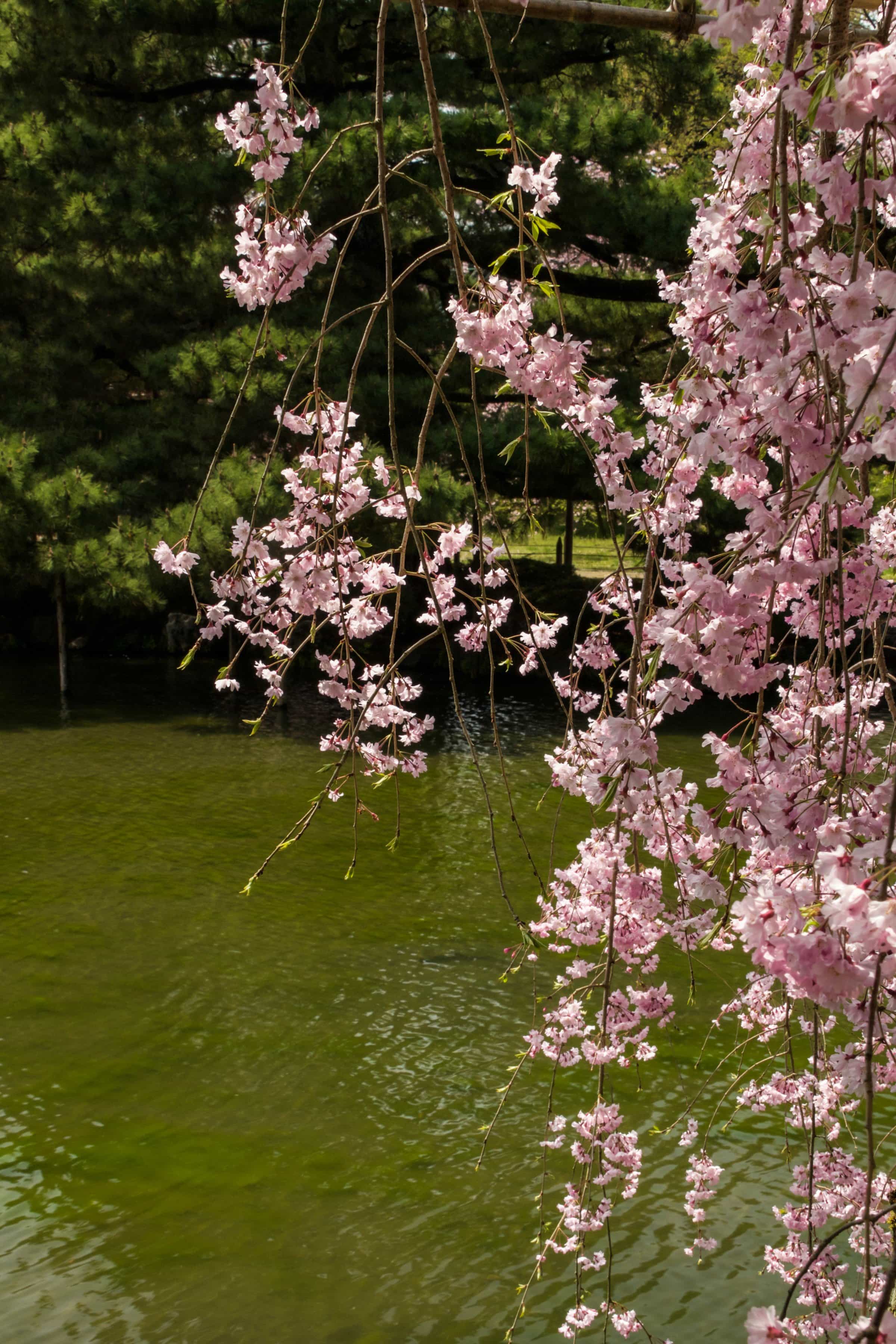 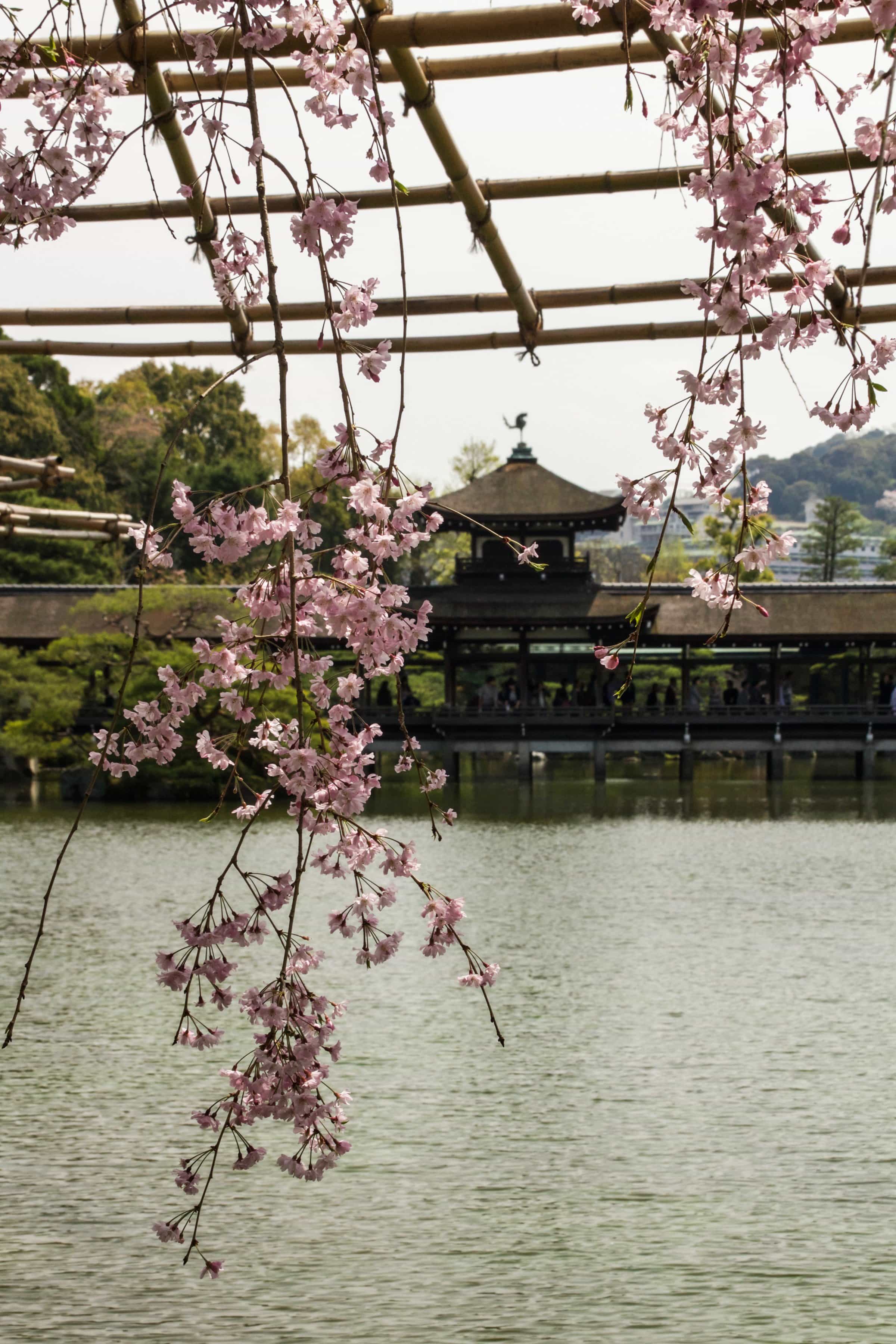 Nanzenji can be found at the base of the Higashiyama mountains and is an incredibly important Zen Temple. Originating in the 13th century, this complex has continued to expand. The grounds are free to enter; there are, however, entrance fees per temple. Upon approaching the complex, you will walk through the Sanmon Gate, built in 1615, and it’s quite a site! We decided to pass on entering the temples. We were surprised to come across a huge, brick aqueduct on the premises; this was initially used to carry water between Kyoto and Lake Biwa. 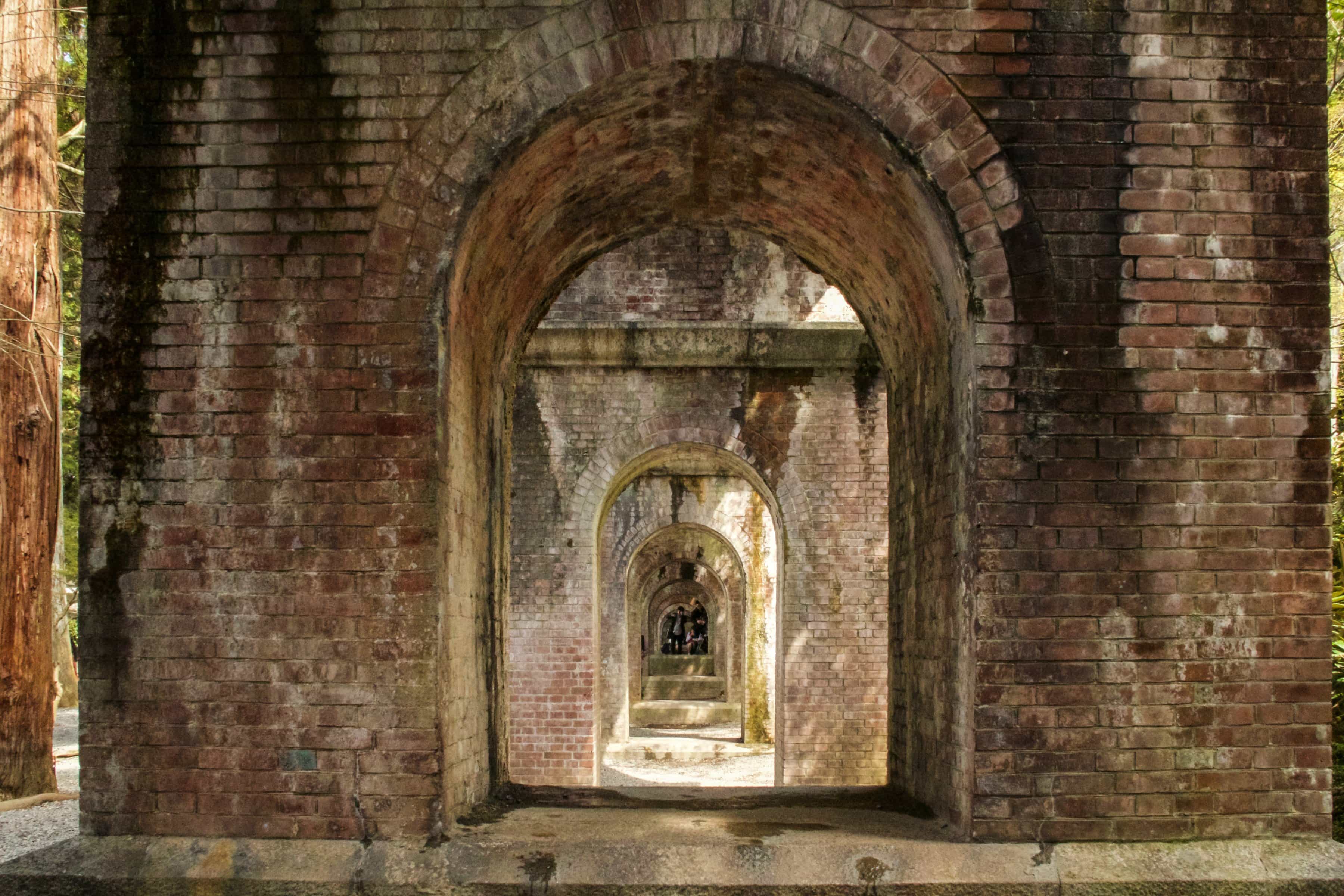 Arguably the most famous of them all, Kiyomizu Temple is overflowing with tourists. I was unamused, to say the least. When you have so many people flooding a spiritual site, it just takes away from the experience. 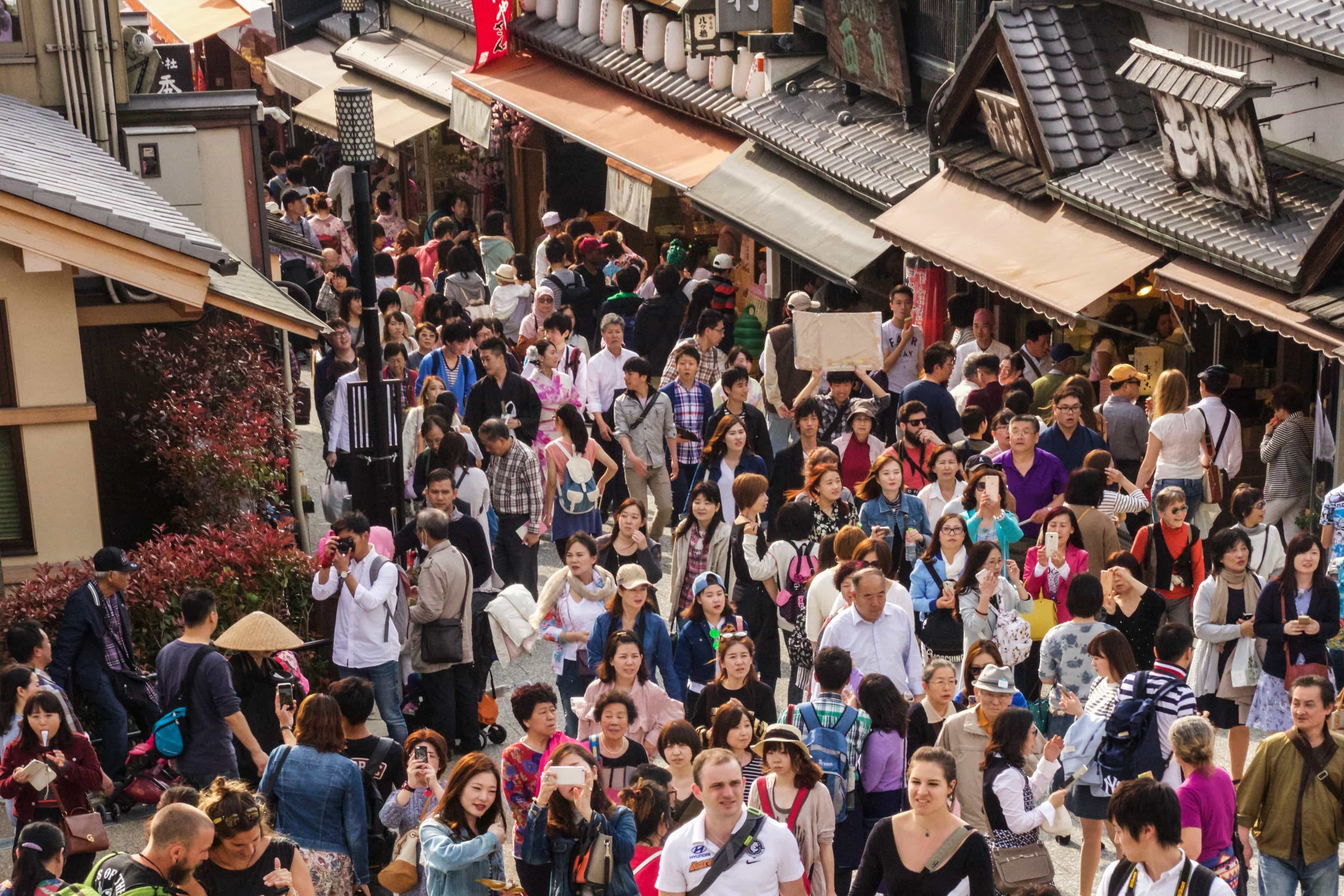 That is how we felt when visiting Kiyomizu. A temple founded in 780, and associated with one of the oldest schools of Japanese Buddhism, Kiyomizu Temple has been deemed a UNESCO World Heritage Site. Walking up the hill, through the body-to-body Higashiyama District was less than enjoyable, and by the time we reached Kiyomizu, we were ready to turn around. And so we did. 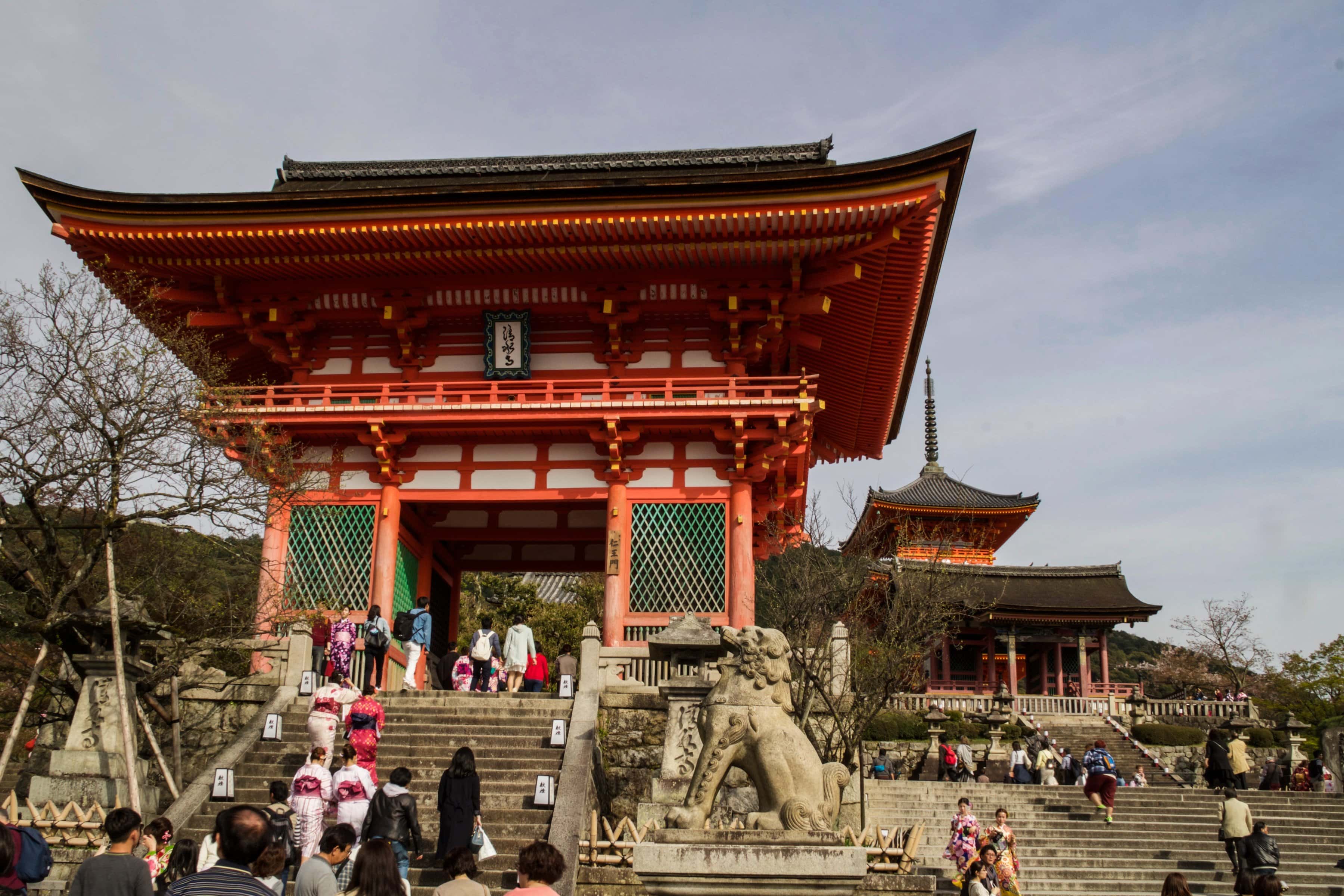 Yes, it’s a beautiful area, and, yes, I’m sure it offers stunning views once you pay the fee to enter, but after having already experienced quite a few temples, with far less tourists, we felt as if we didn’t need to enter the bustling Kiyomizu Temple.

We finished up an exhausting day wandering from temple to temple at Kiriha Inn and Café. After being served a delicious iced matcha latte, we had time to catch up with a friend of mine that I met in Bolivia 2 and a half years ago. He makes a pretty fabulous barista, and a killer matcha latte, so go say hi to Darren for me! 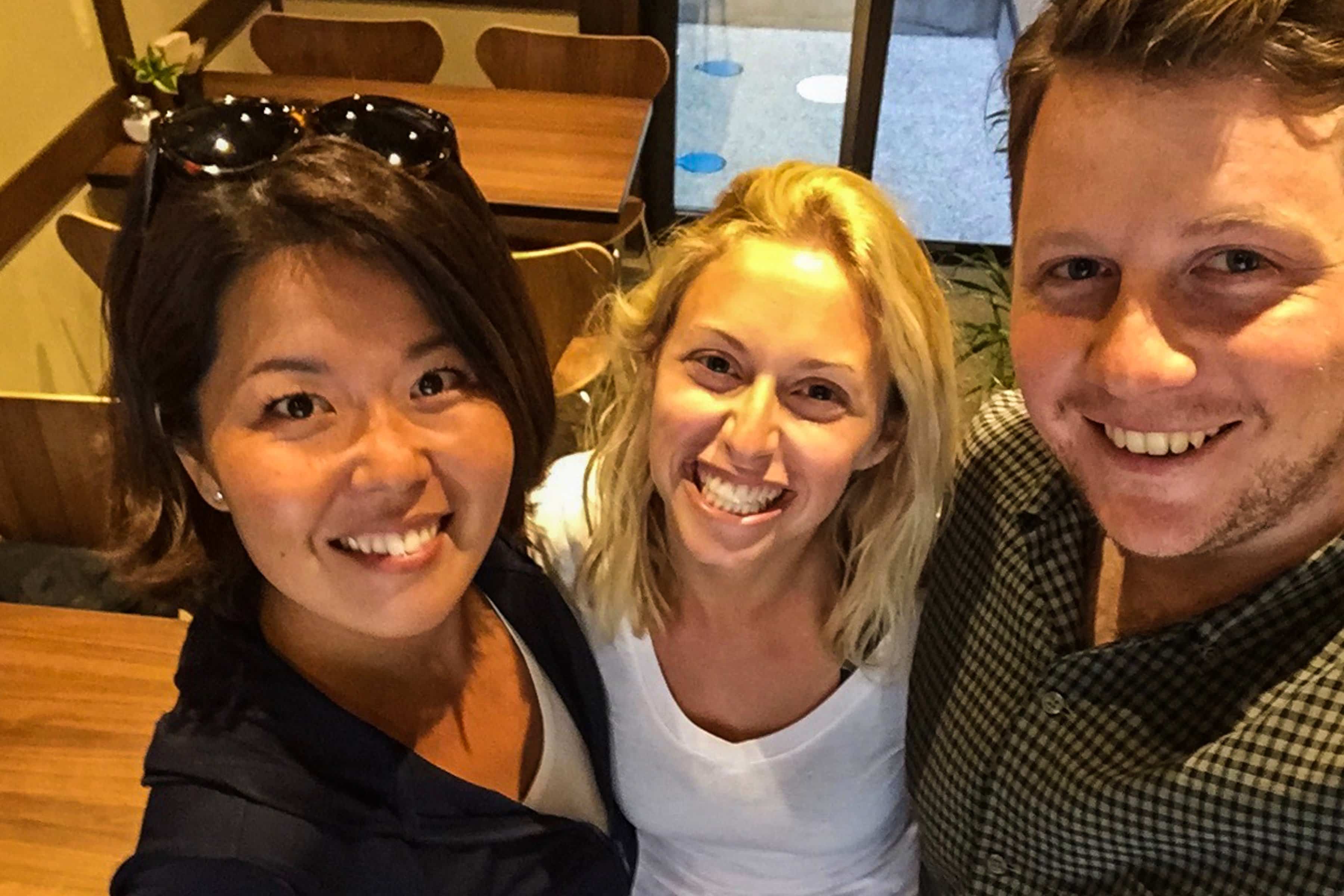 5FT Note: We visited Kyoto as two separate day trips from Nagoya and Osaka, so we had to factor in about an hour travel time each way. This is highly recommended if you are visiting Japan during Cherry Blossom Season!

Are you interested in visiting Kyoto in 2 Days? Pin It Please! 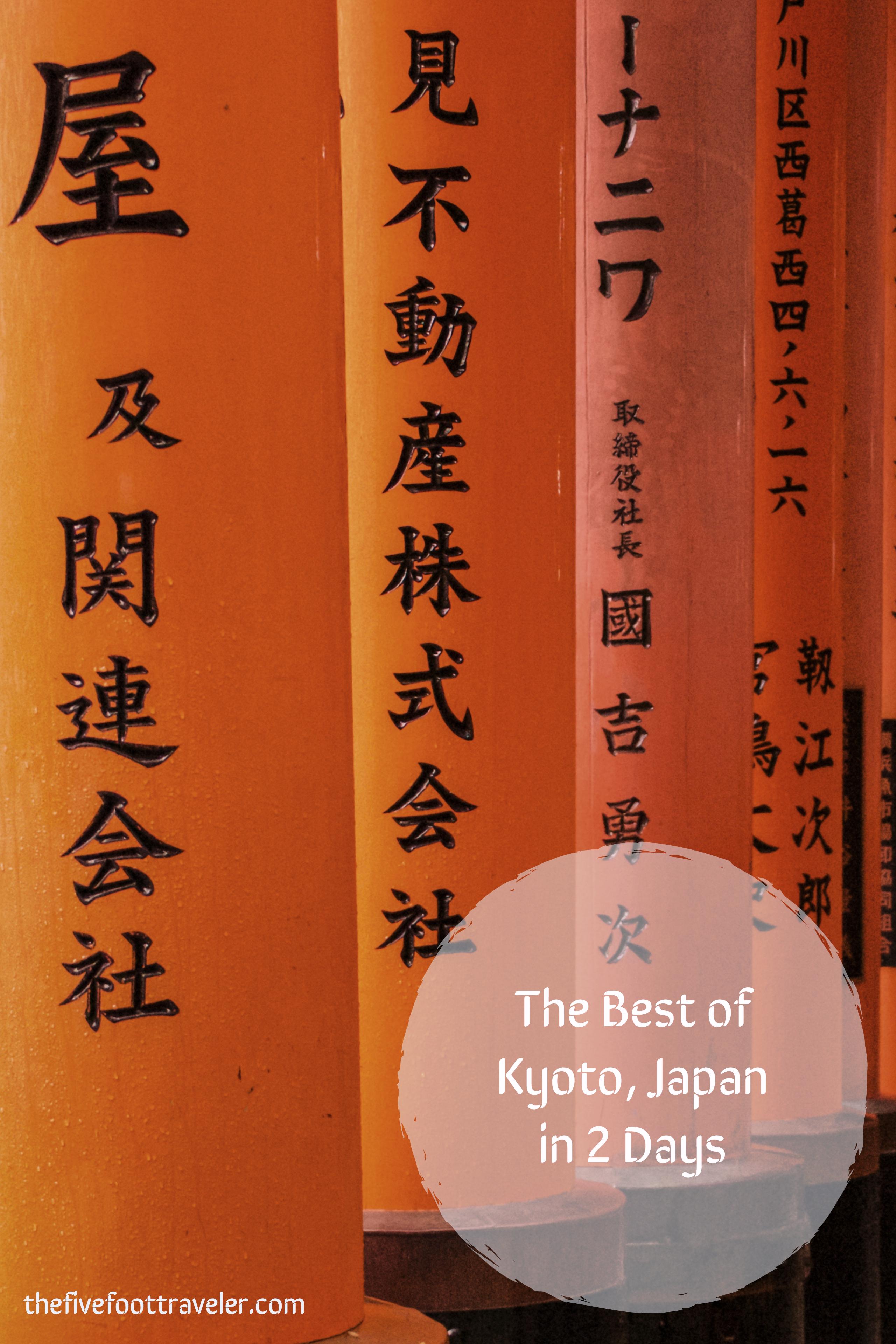 **Special thanks to Japan Experience for sponsoring my journey. As always, all opinions are my own.