The iSimangaliso Wetland Park has two entrances: the Eastern Gate and the Western Gate. With almost a full free day in St. Lucia and not knowing what to expect, we decided to explore both sides of the park and embark on our first self-drive safari. We were advised to start at the Eastern Gate; the turn offs are clearly marked and the roads are well-maintained.

We saw zebra early on, some antelope, warthogs, monkeys, and cape buffalo far in the distance. At the uMziki viewpoint, we met a group of four that were circumnavigating the world on their boat, not for the first time. Fueled by my own wanderlust, I asked which were their favorite places. Their answers? Reunion Island, French Polynesia, and the Galapagos islands. At least I could say that I have been to one of their top three places in the whole world! After heading to Mission Rocks, located on a beach with great swell and misty spray, we decided that we weren’t that impressed with Eastern iSimangaliso and were hoping to test our luck on the Western side. 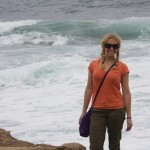 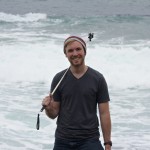 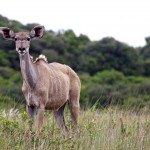 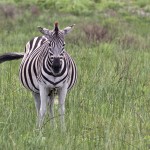 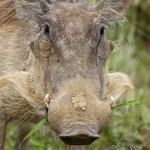 Duku Duku not only sounds like a cool name, but it is also the gate through which we entered the Western side of iSimangaliso. Travelers Tip: The map sold at iSimangaliso are the same for each park. You only need to buy one at the first gate and, unfortunately, the maps were not quite as detailed as we had hoped.

After much driving, we saw our first group of giraffes (supposedly a group of giraffes are called a “Tower,” but that just sounds strange to me)! They’re every bit as lanky, beautiful, and graceful as one would imagine. It hit me yet again that I was actually in Africa, seeing these wild animals in their natural habitats rather than behind enclosures at the zoo!

We kept driving along and saw an elephant in the distance! We observed the elephant for a while, then shortly thereafter I spotted a white rhino. As we watched it graze, it became clearer as it drew closer to our vehicle. Pleased with what we had seen on our first self-drive safari, we finished the route and decided to take a turn down toward Charter’s Creek. As we turned and began driving down the dirt road, we saw a lone giraffe, perfectly framed by the trees down the hill below us. As we approached, we saw the giraffe right next to our car, munching on some leaves. That was the first time we realized that the animals really weren’t afraid of our car. We came across “our giraffe” several other times and watched it walk down the road ahead of us. After realizing that it wasn’t going to leave the middle of the road anytime soon, we decided to put the car and reverse back onto the main road. We passed a pack of wildebeests, exited the park, and easily found our way back to the hostel just before nightfall. 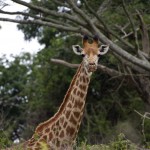