Hobbiton: There & Back Again (Hopefully!) 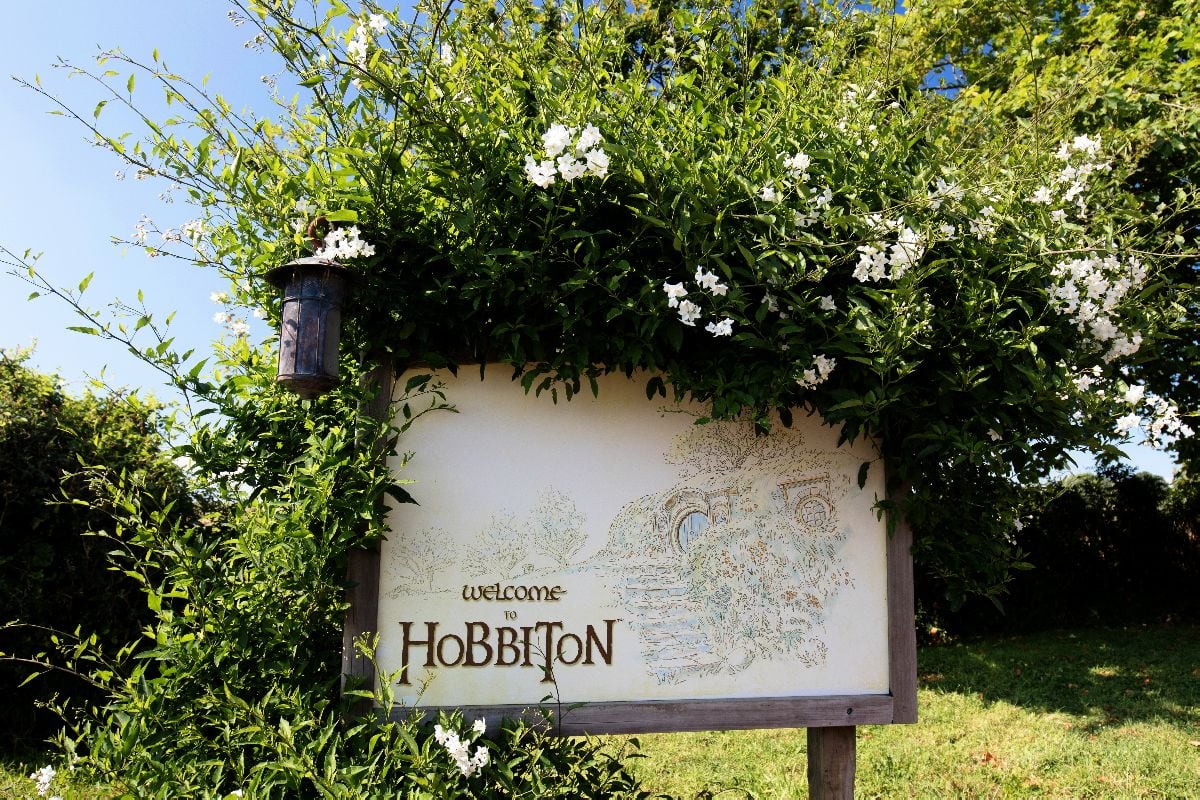 The Lord of the Rings Trilogy, specifically Return of the King, has been one of David’s favorite movies since elementary school, so I was unbelievably excited to bring him to Hobbiton. The Shire is depicted as a peaceful haven of hobbits that are a community-oriented, agriculturally-advanced society; it is a stress free environment, away from the chaos and troubles of Middle Earth. Those in The Shire were blissfully unaware of the wars to come, with the only worry being what kind of trouble Pippin and Merry would get themselves into. 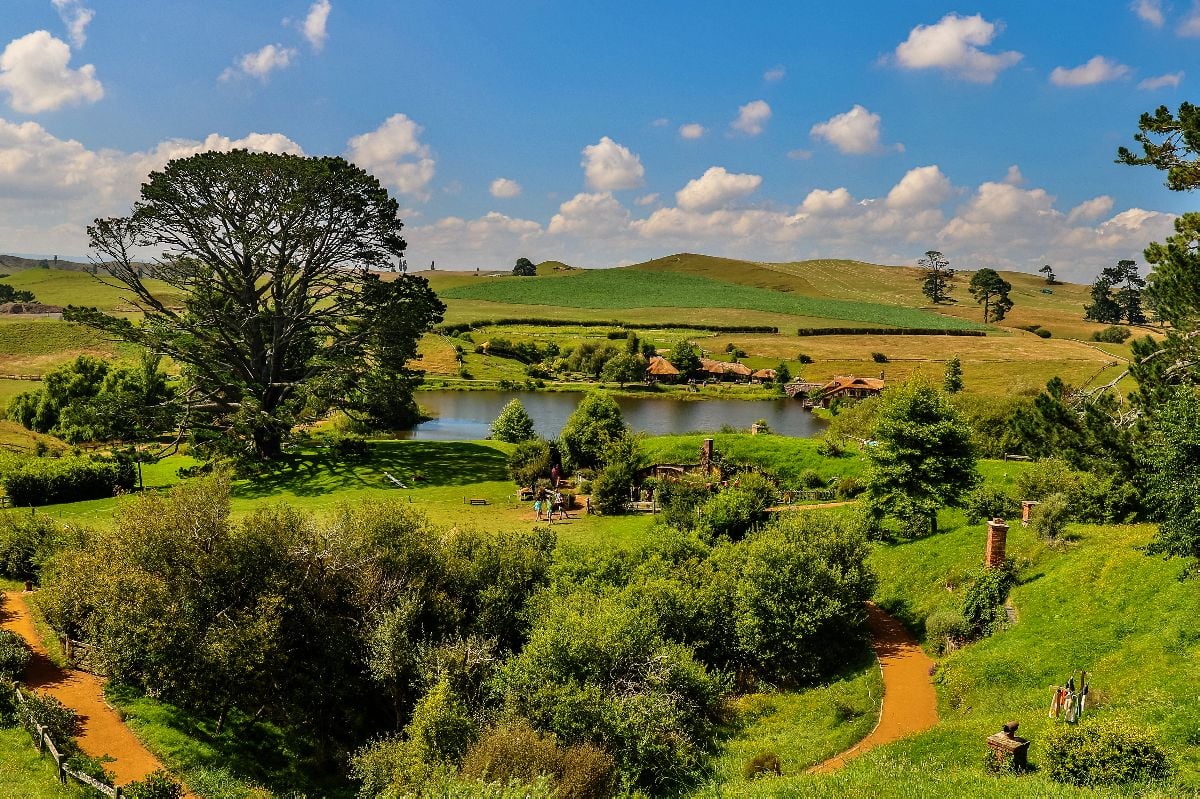 That’s exactly what Hobbiton is like in person as well — a piece of magical paradise completely separate from the “real world” horrors of war, poverty, and disease. Peter Jackson actually had twelve other New Zealand farms in mind before finding the Alexander Family Farm. He decided that the lush green pastures of this particular farm matched Tolkien’s description of The Shire perfectly. 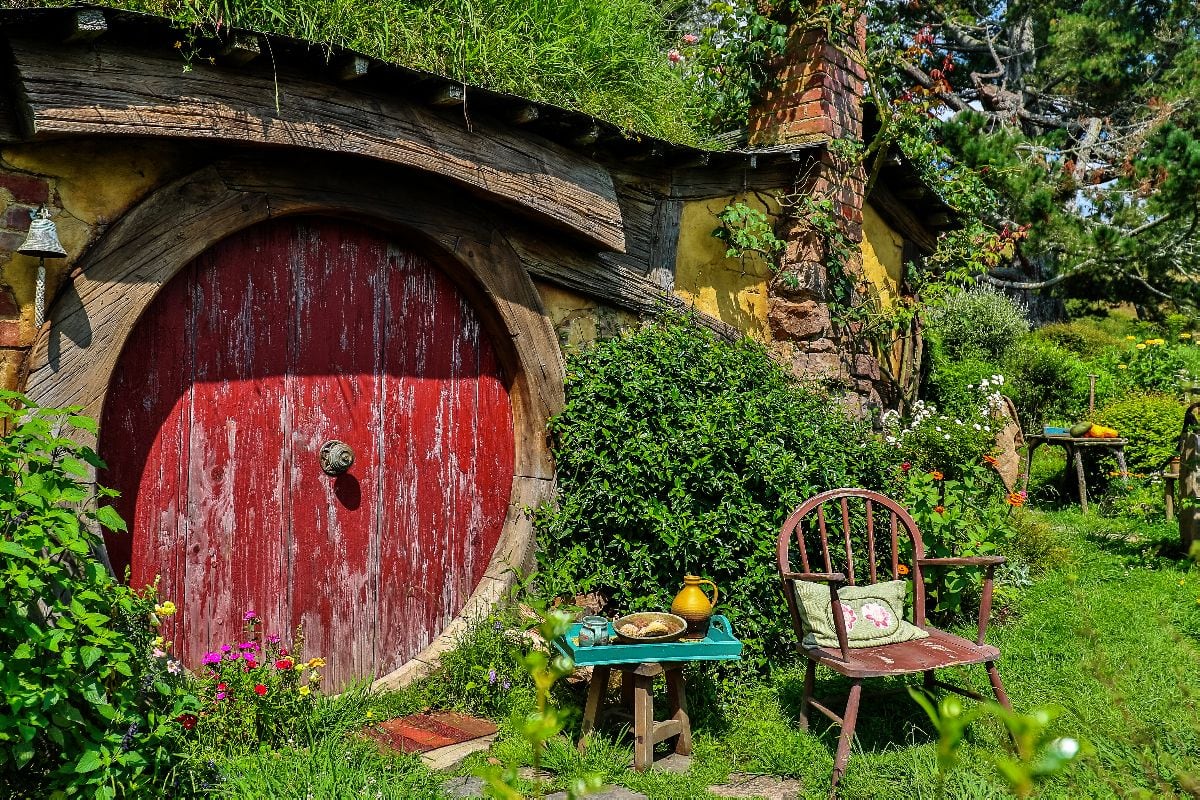 We arrived at The Shire using the same road that Gandalf and Frodo rode down in the beginning of The Fellowship of the Ring. Upon arrival, your senses will be overwhelmed by the sound of birds singing, frogs croaking, butterflies fluttering about, and more importantly, the splendor of your first Hobbit Hole sighting. 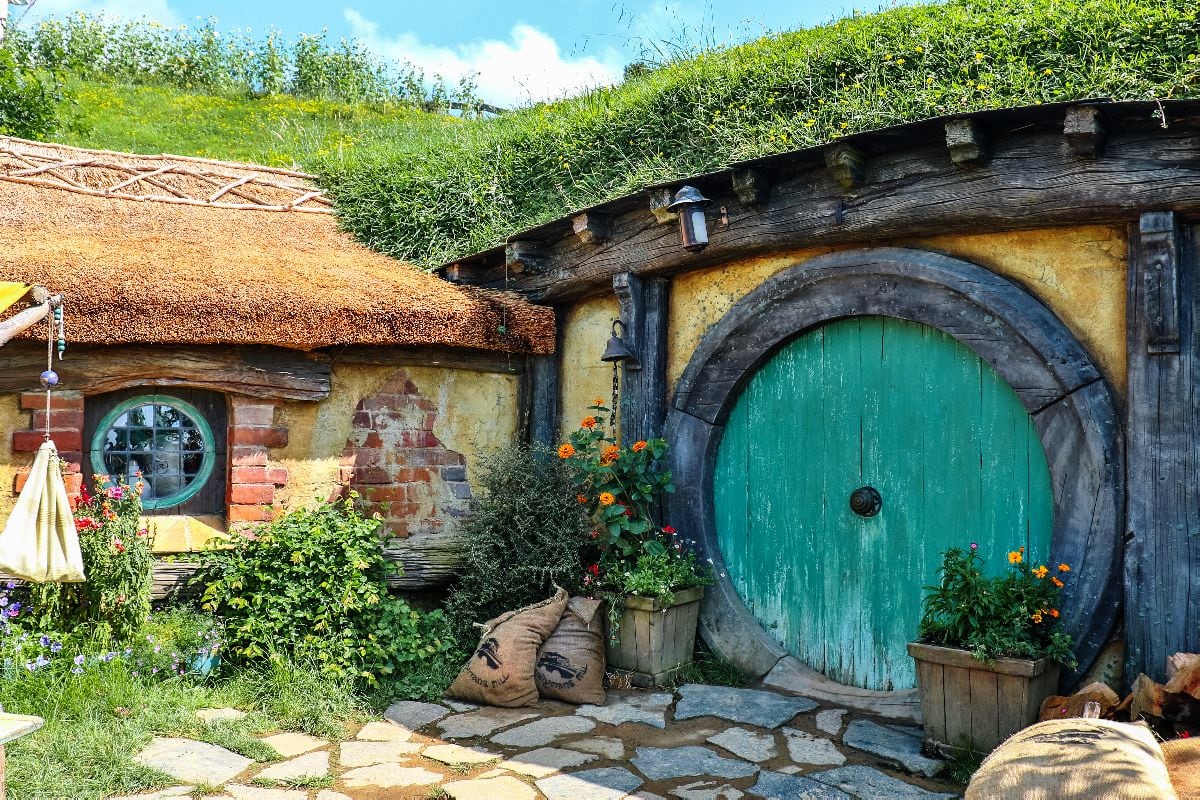 5FT Fun Fact: The frogs were so loud during filming that the actors couldn’t hear each other. The solution? Peter Jackson had an employee catch and move all of the frogs, and then re-introduced them to the area after filming. 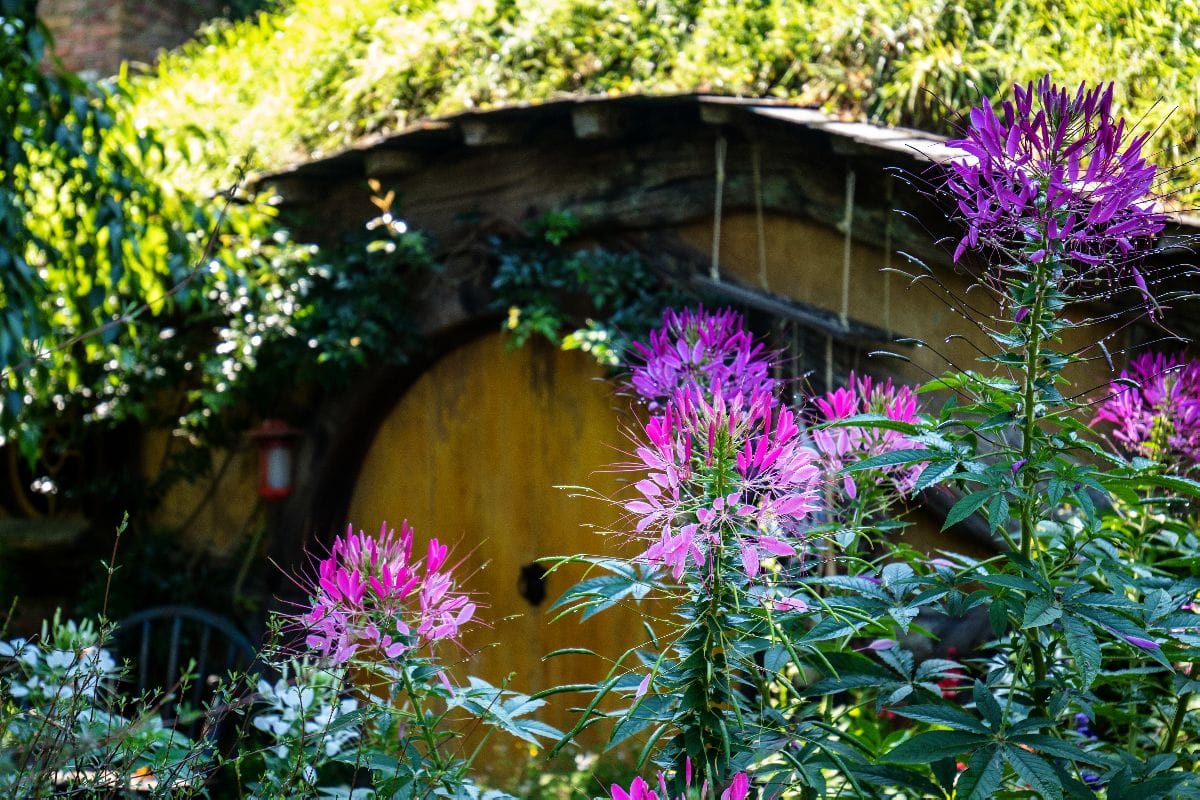 As you progress through The Shire, your guide will reveal many interesting facts about the process of filming and building the set. Peter Jackson used forced perspective filming to make the Hobbits look so short. For instance, in the opening scene when Frodo rides the wagon into The Shire with Gandalf, he is actually sitting three feet behind him; in this way, Frodo looks smaller and Gandalf looks bigger. Going off that, all of the Hobbit Holes have different sized doors. To get an actor to look smaller, they were put in front of a bigger door; to get an actor to look bigger, they were put in front of a smaller door. 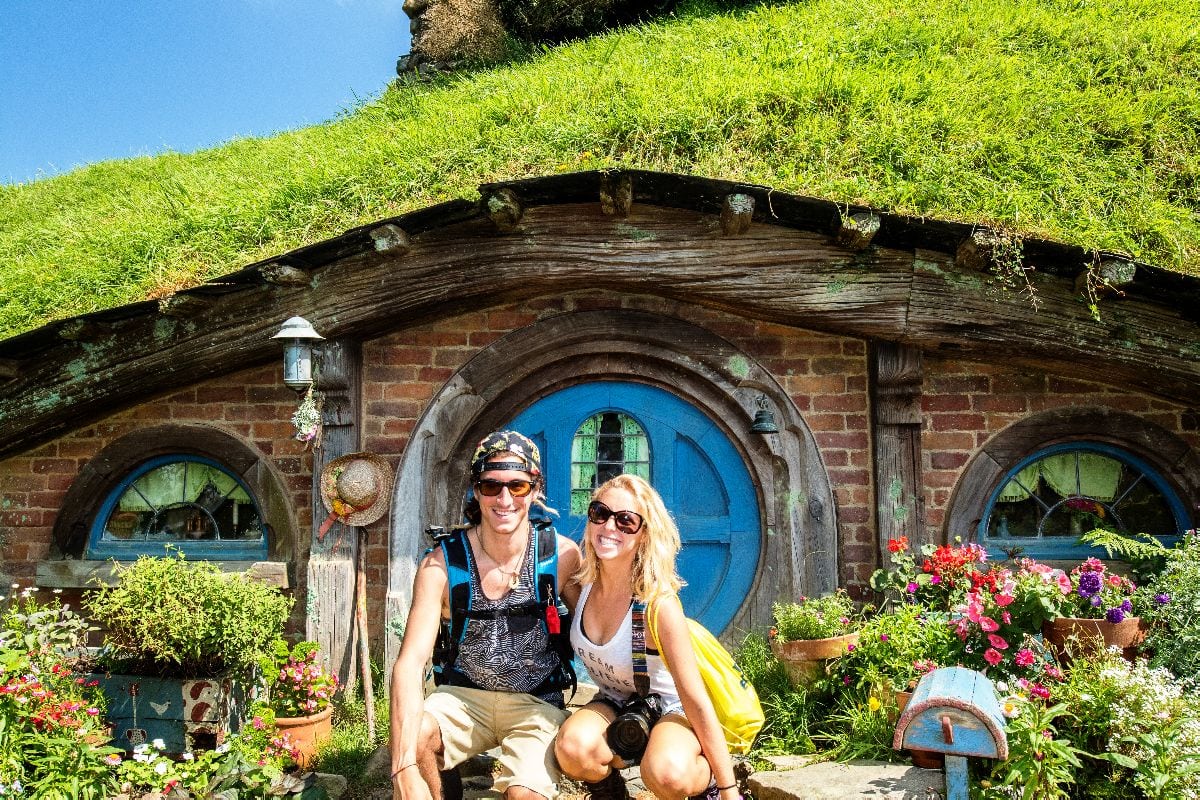 The Hobbiton Movie Set Tour was chock-full of information, but these were some of the most memorable facts: 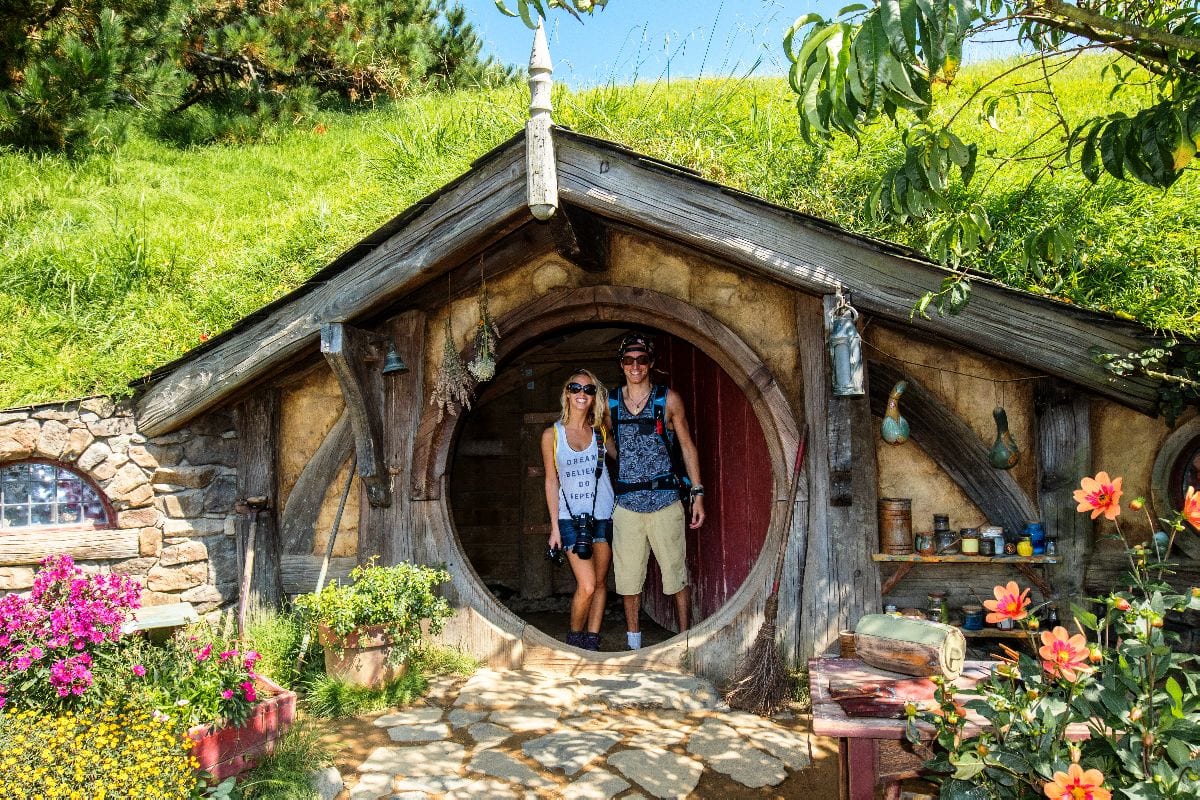 Moving along from the entrance, you will see many Hobbit Holes and take in the surrounding beautiful landscapes. The Shire itself seems 100% real, and yet it’s all a manifestation of Tolkien’s untouchable imagination. The guide speaks as if the Hobbiton Movie Set Tour is a historical tour with events that actually happened; according to David, for hardcore Lord of the Rings fans it seems very real and profound.

It helps that you get to visit the home of both Bilbo Baggins and Samwise Gamgee too! 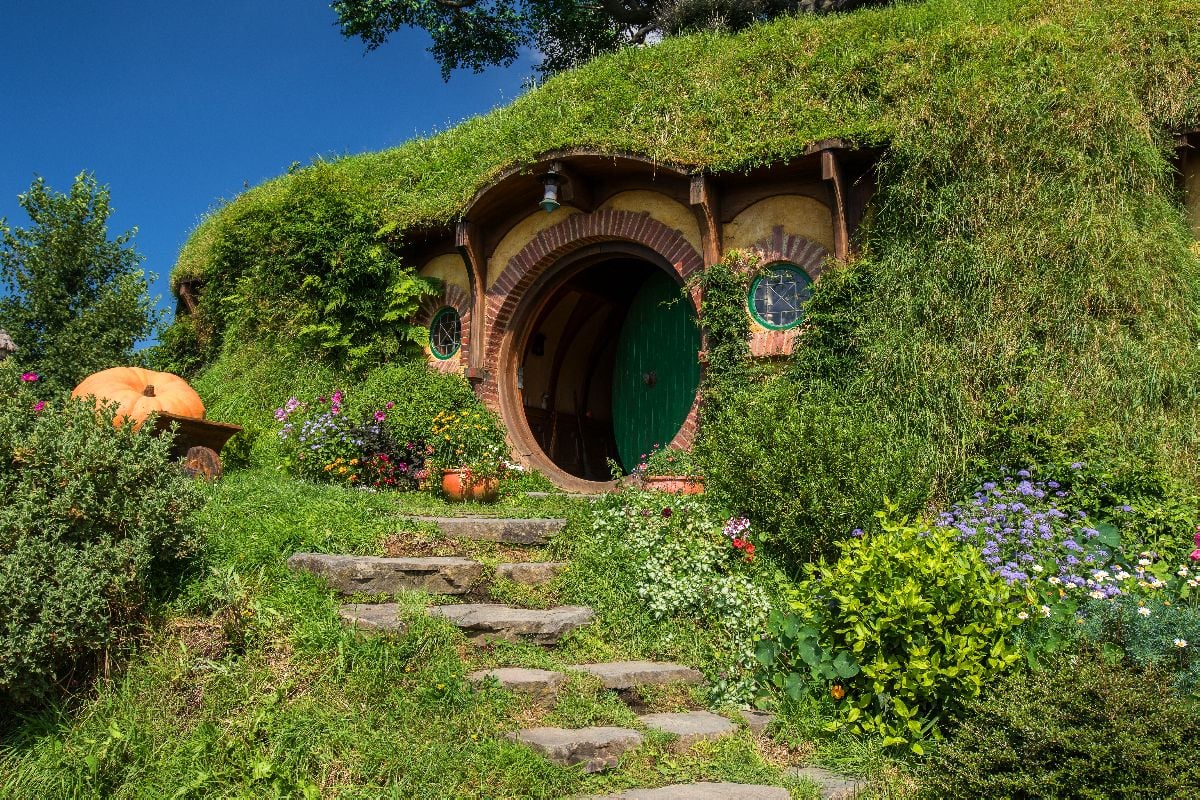 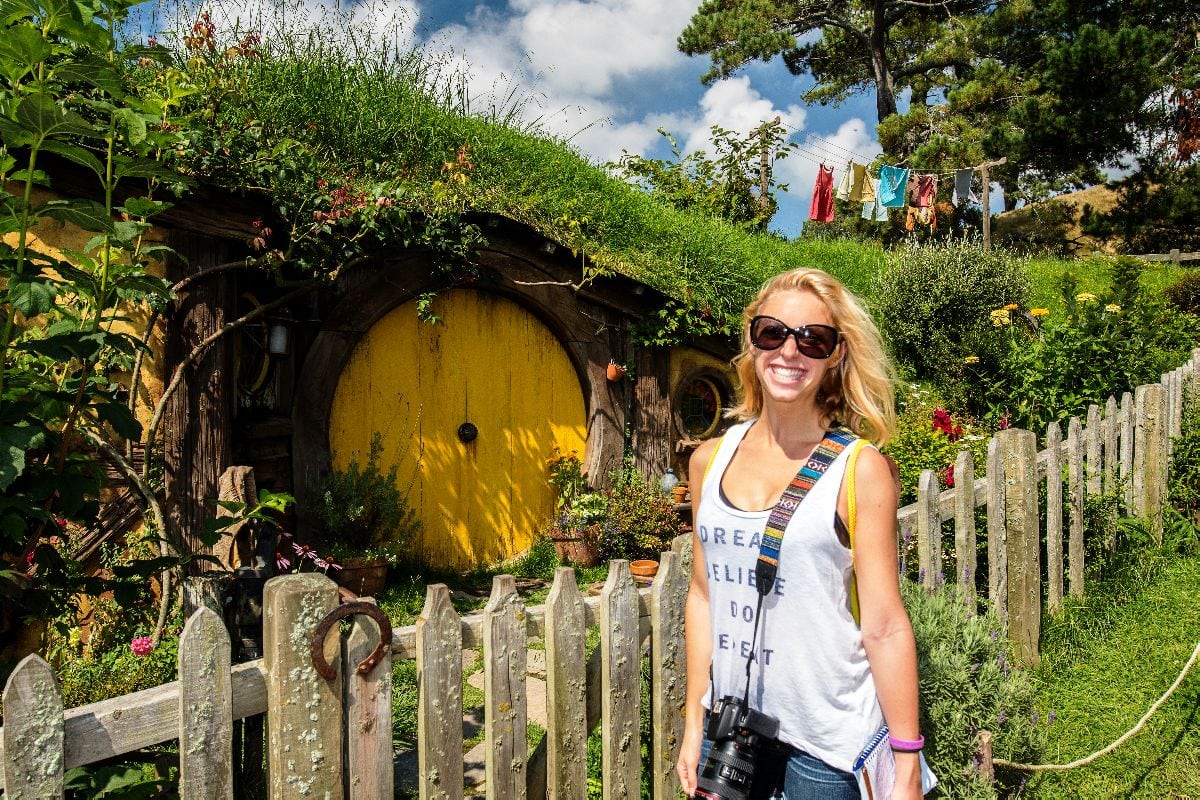 The tour ends at the fabled Green Dragon Inn. 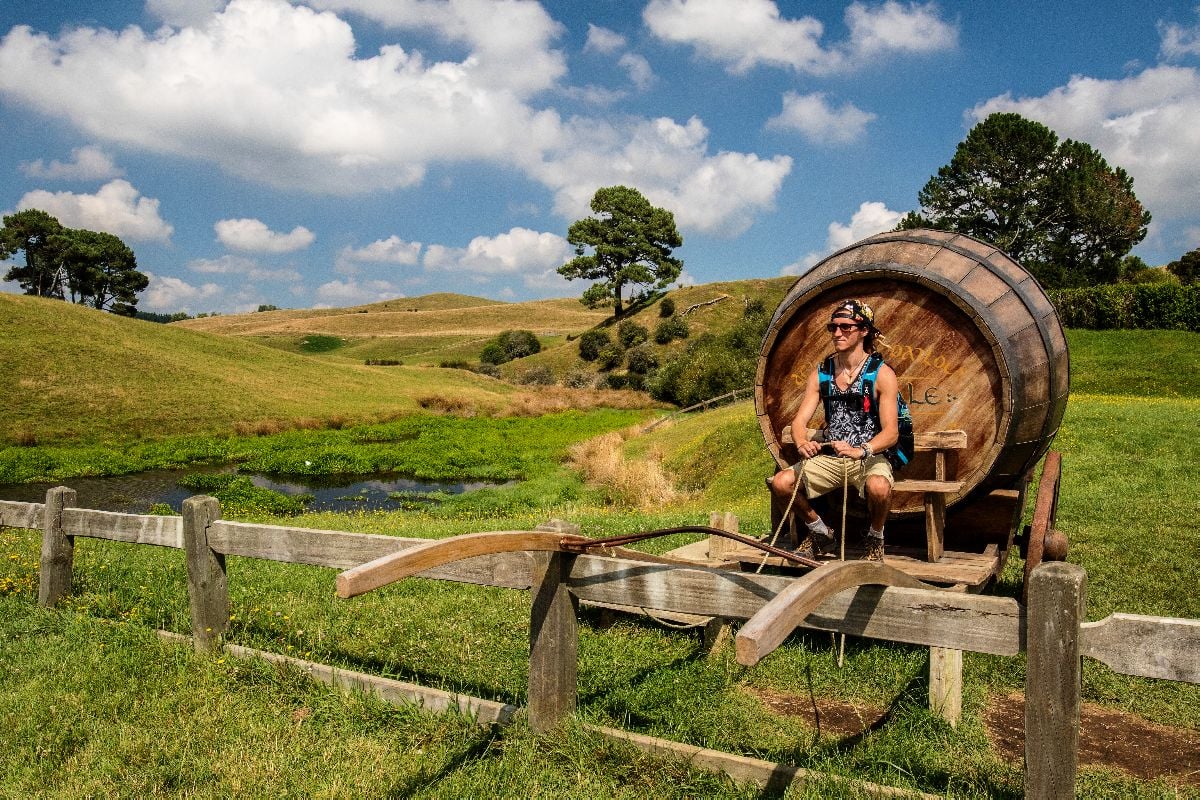 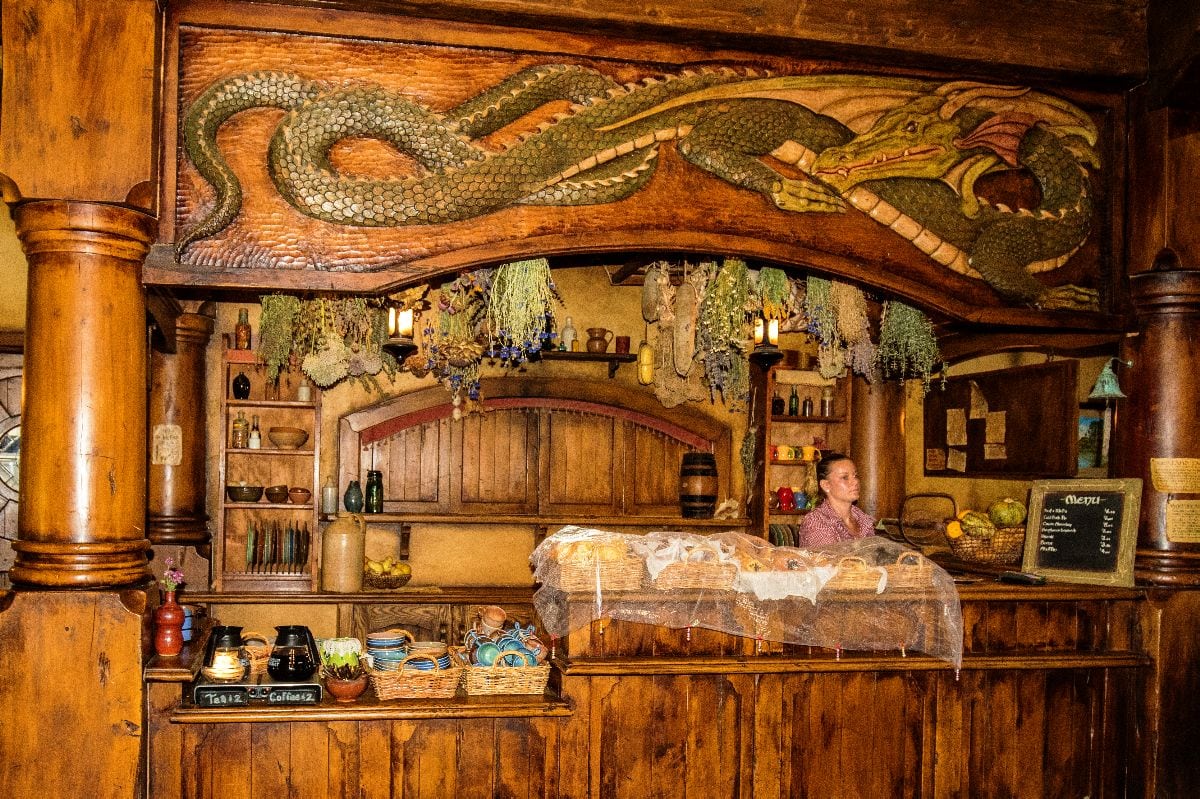 Here, you can get a made-only-for-Hobbiton drink (alcoholic or not) for “free” and can toast with your friends and family in the same place Frodo, Sam, Pippin, and Merry do at the end of Return of the King. I highly recommend the ginger beer – it’s the best I’ve ever tasted! 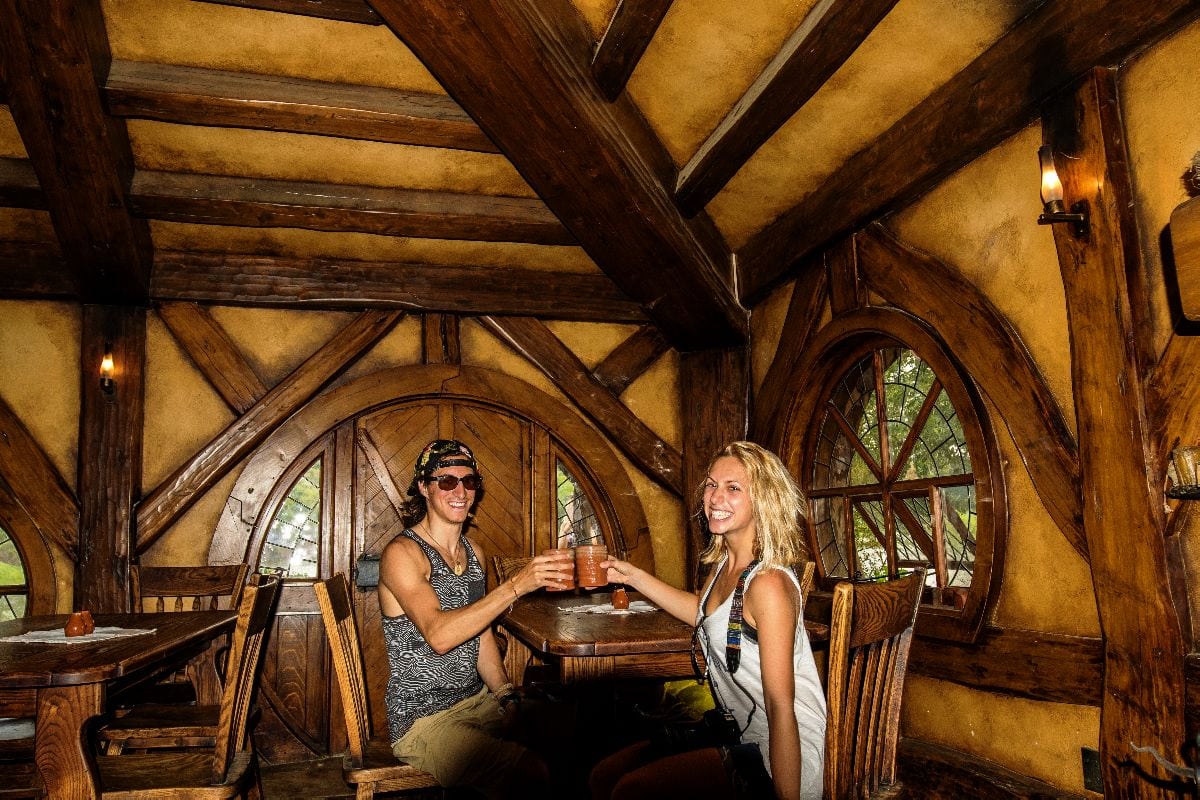 After that, take one final walk through the genuinely beautiful Shire, and soak it all in for the last time. The lush rolling green hills, hobbit holes, and the impactful sense of peace and tranquility will leave you yearning to go back and experience the beauty again. 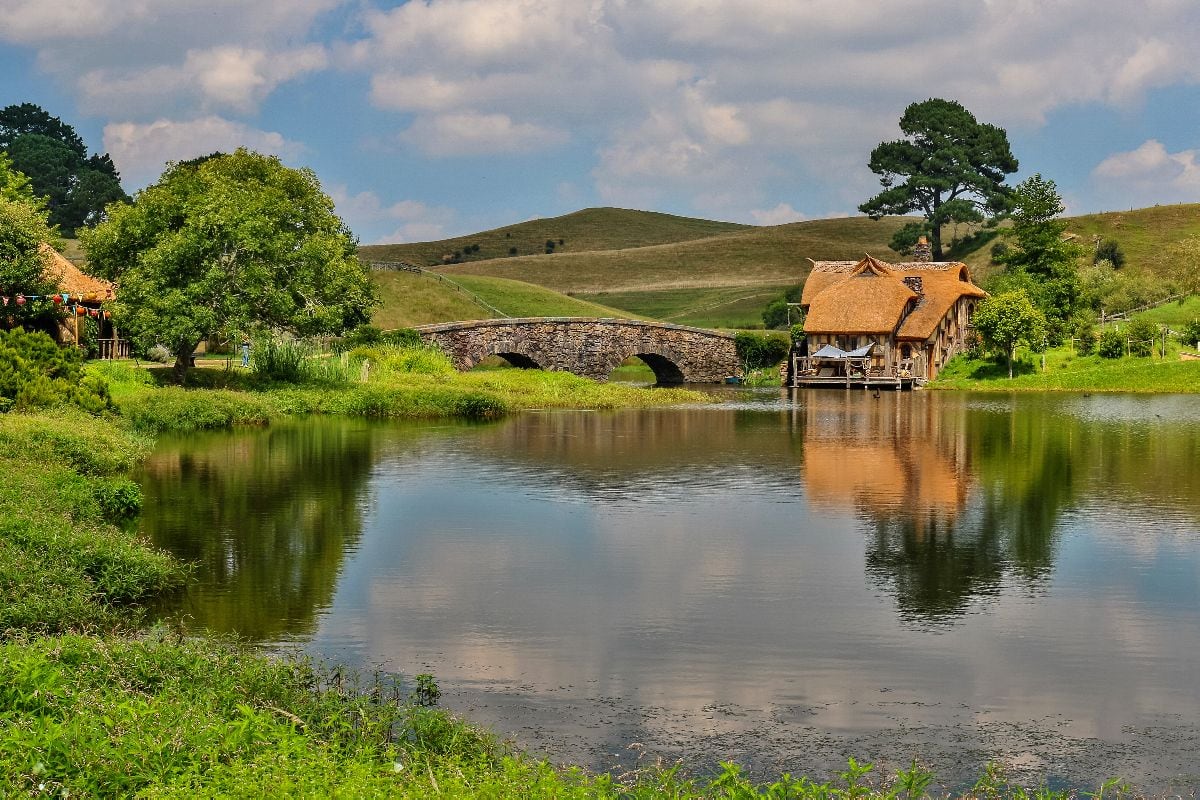 Lord of the Rings fan or not, Hobbiton is an absolute must for anyone visiting New Zealand! Peter Jackson put together a truly stunning work of art. 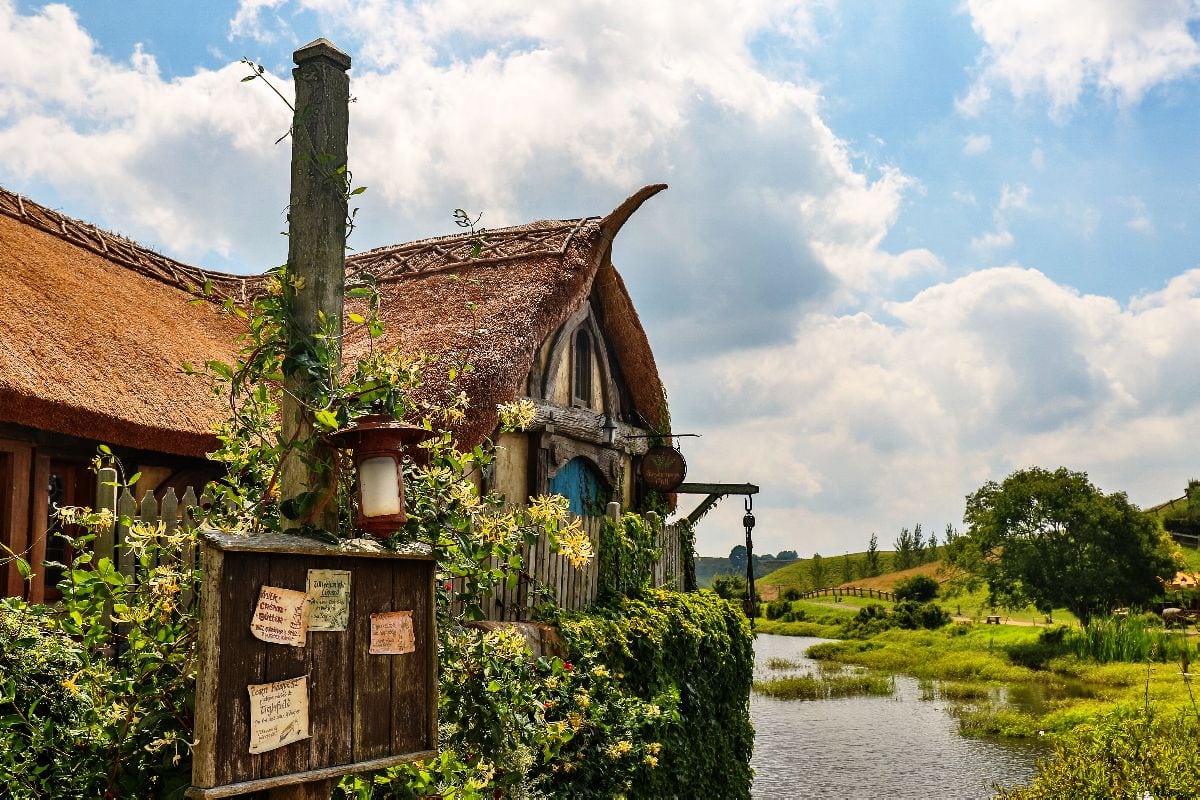 **Special thanks to Air New Zealand and Hobbiton Movie Set Tours for letting us be part of your story. As always, all opinions are my own. Photographs taken by David M Gallo Photography. 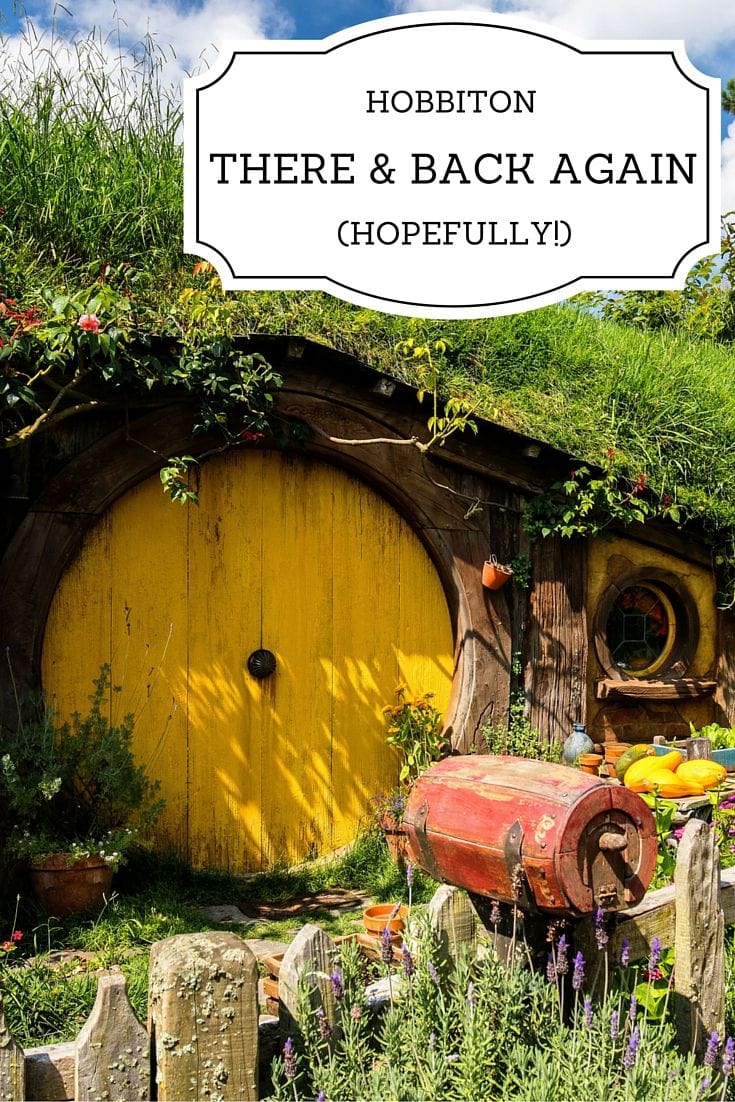