“We've got a kill!” our guide exclaimed as she screeched to a stop in front of the two of us. We met Stacey, our guide from Heritage Tours, at the Nyalazi Gate, hopped into the car and raced into Hluhuwe-Umfolozi Park. Within 60 seconds we saw two lionesses feeding on a carcass in clear sight. Talk about a rush of adrenaline at 6am! We watched them eat and then Stacey realized that one of them was about to cross the road so she quickly, instinctively, turned us around and, before we knew it, the lioness ran right in front of our car! We turned to watch the other lion chow down on breakfast. Stacey realized yet again that she was going to cross the road, repositioned us and, as predicted, lion number two ran right in front of our vehicle! Quite a way to start our first African Safari indeed. Travelers Tip: a lens of at least 250 mm is highly recommended for game drives. Anything less and you may have difficulties spotting some wildlife clearly, much less capturing the image. 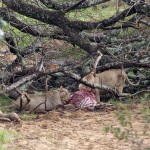 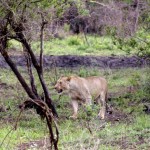 The Hluhluwe-Umfolozi park is about 10,000 hectares, which is only a fraction of the size of Kruger National Park, but well worth the visit. Hluhluwe-Umfolozi used to be two separate parks, but merged due to having the highest concentration of rhino in the world. While both parks are accessible, 80% of the predators are found in Umfolozi so we spent most of our game drive there.

A bit about Umfolozi: Umfolozi is actually the oldest wild park in all of Africa, and the second in the world (following Yellowstone). It was formed solely for the protection of rhinos. It was originally the hunting ground for the Zulu Kings and protected by the royal family prior to the formation of the wildlife reserve. South Africa holds 80% of the world's rhino population but, sadly, one rhino gets killed every six hours for its horn in South Africa alone. If it weren't for Umfolozi, it is likely that rhinos wouldn't exist today.

Afterwards we stopped for a light breakfast with refreshments provided by Heritage Tours; this was a great way to break the ice between the international visitors. As we moseyed along, we spotted some giraffe. We learned that there are 9 different giraffe species in Africa, but that South Africa is only home to one – the Southern Giraffe. We continued along, saw some elephants, and were brought to a stop when white rhinos (and baby rhinos) were crossing the road directly in front of us. We sat observing them for a bit of time before driving along. 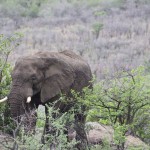 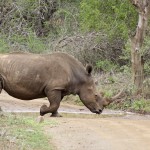 Toward the end of our game drive the animals were seeming to be sparse as it was about mid-day. We were looking for wildlife to spot on our way back to the entrance gate, when we saw yet another black rhino…but this time it was right next to our truck! It was a very rare and special sighting indeed. 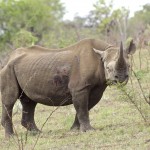 Our half-day guided safari came to an end around 11:30am. We knew that we had made the right decision in doing a guided game drive (over a self drive) for Hluhluwe-Umfolozi pretty soon after entering the park, as some of the dirt roads are in rough condition (many potholes) and it would have been easy to get lost. We highly recommend using Heritage Tours; their guides are extremely energetic and passionate about their profession. They had numerous safari vehicles within the park at once and communicated with each other throughout the day to ensure that everyone had the opportunity to see the best sightings. But, despite this, Heritage Tours will provide you with an entirely individual experience, as all the vehicles do not travel along as one band of cars. If you're short on time and only have the ability to do a half-day safari over a full-day, DO IT. We promise that you won't regret it! The half-day safari, combined with the highly trained guides, made for a full adventure.

Check out our experience below!