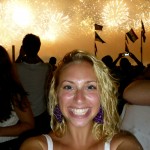 As midnight approached, 2.3 million people arrived on Copacabana. The main stage and smaller stage were pulsing – people were dancing, drinking, and chatting, all while trying to avoid stepping on pieces of broken glass and smashed beer cans. Time was flying by and, suddenly, everyone started the countdown: “dez, nove, oito, sete, seis, cinco, quatro, três, dois, um…” FELIZ ANO NOVO!! Cue the most spectacular fireworks that I have ever seen. With a boom, fireworks filled up the entire sky – spanning the length of the beach. All colors, all shapes, all styles. Nonstop for 30 minutes. Through sips of champagne, we all hugged and cheered and listened to the Brasilians singing what I could assume to be their equivalent of Auld Langs Syne. 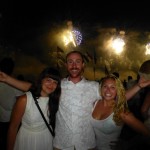 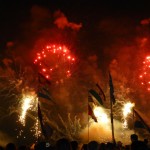 It’s another tradition in Rio de Janeiro to increase your luck by jumping over 7 waves while making 7 wishes. Our whole group was aware of this notion so, as the fireworks ended, we took off to the water’s edge, going completely into the water instead of just jumping the waves at our feet. What we didn’t know was just how strong the waves were – we were laughing hysterically as we were repeatedly tumbled, which led to some of the funniest moments of my life. The view from the water blew my mind; there were thousands of people standing on the beach jumping waves in front of us, and eight cruise ships beautifully lit behind us. 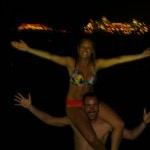 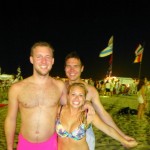 Some of our group passed out soon after, others wandered home, but a few of us were determined to make it until sunrise, and we did! The music blasted and the dancing never stopped. At the first signs of sunrise I became giddy like a five year old – it was the beginning of one of the most beautiful mornings I’ve ever witnessed. The sky turned outstanding colors of purples, oranges, yellows, and pinks. The deep red colored sun finally made an appearance and it looked as if flames were coming out of it. We packed up our things, grabbed some empanadas for breakfast, and finally climbed into bed around 8am. 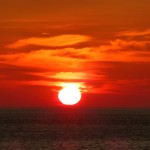 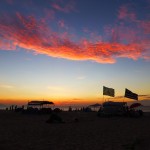 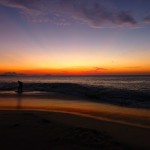 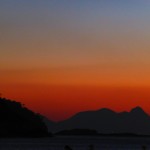 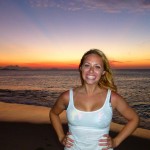