Two of the biggest attractions in the Northern Queensland area are the Daintree Rainforest and Cape Tribulation. With Jungle Tours and Trekking’s “Go Wild Day Tour,” I had the opportunity to explore both of these areas on a day trip from Cairns. Where the Rainforest meets the Reef is the only place in the world where two World Heritage Sites meet. 5FT Fun Fact: The creators of Avatar drew their inspiration for Pandora from the Daintree Rainforest and the Great Barrier Reef.

Our guide, Travers, picked me up from Castaway’s Backpackers at 7:15am sharp and we were off to the rainforest! We had a lovely drive from Cairns along the coast to Port Douglas, where we grabbed a few others. Our first stop of the day was at the Wildlife Habitat. The sanctuary is divided into three different sections: the Wetlands, the Grasslands, and the Rainforest. 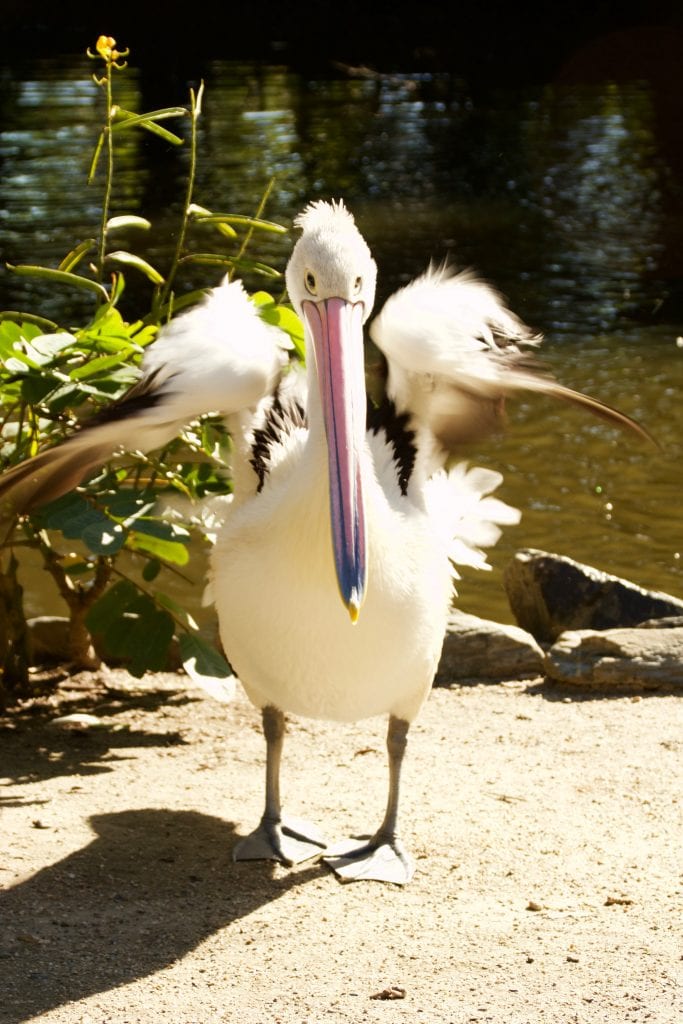 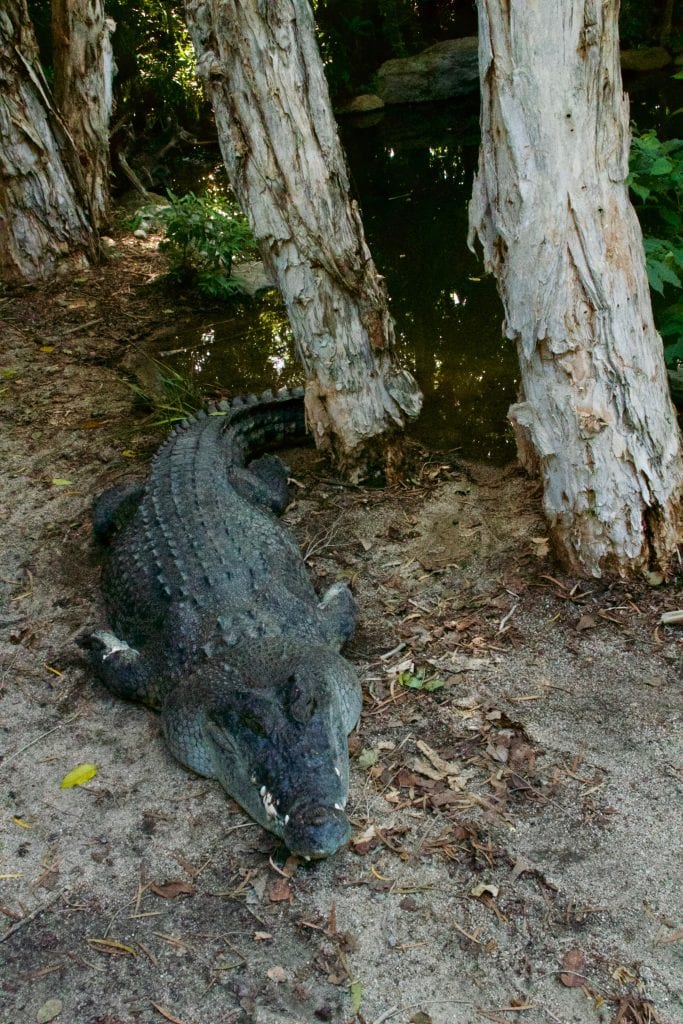 My favorite aspect of it was, hands down, the Grasslands with the kangaroos! 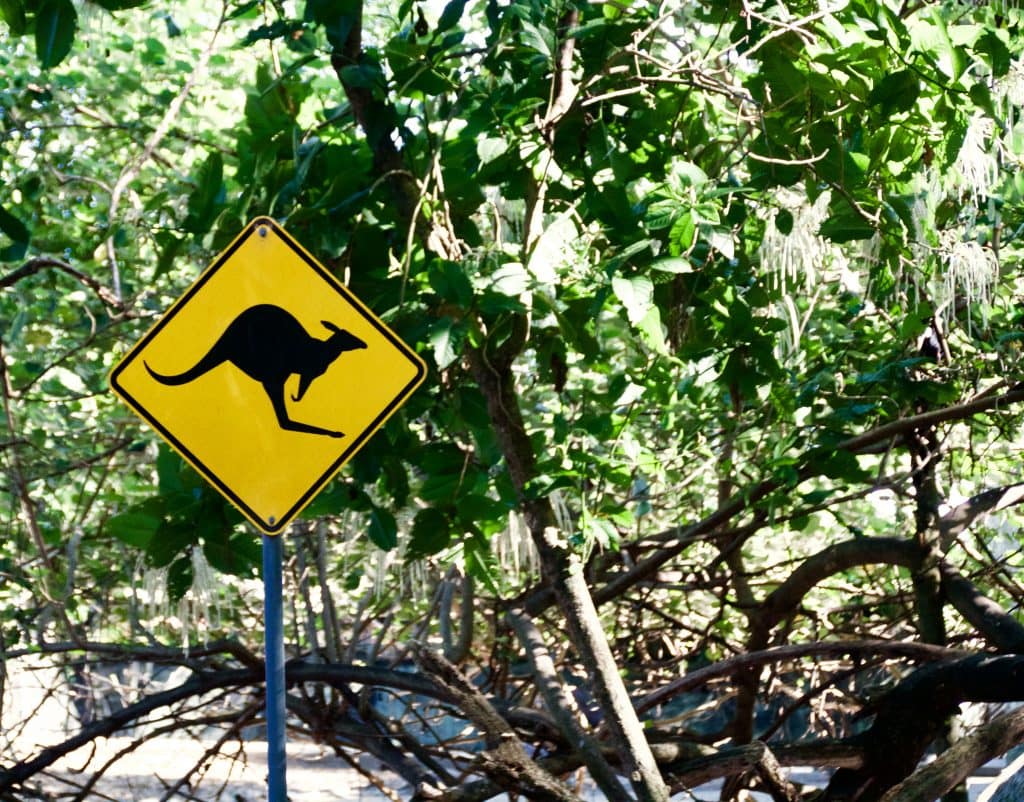 Here, we had the ability to walk into an open-range enclosure where kangaroos and wallabies hopped over to you with curiosity. One wallaby tried to hop in my lap, and another tried to kiss me! 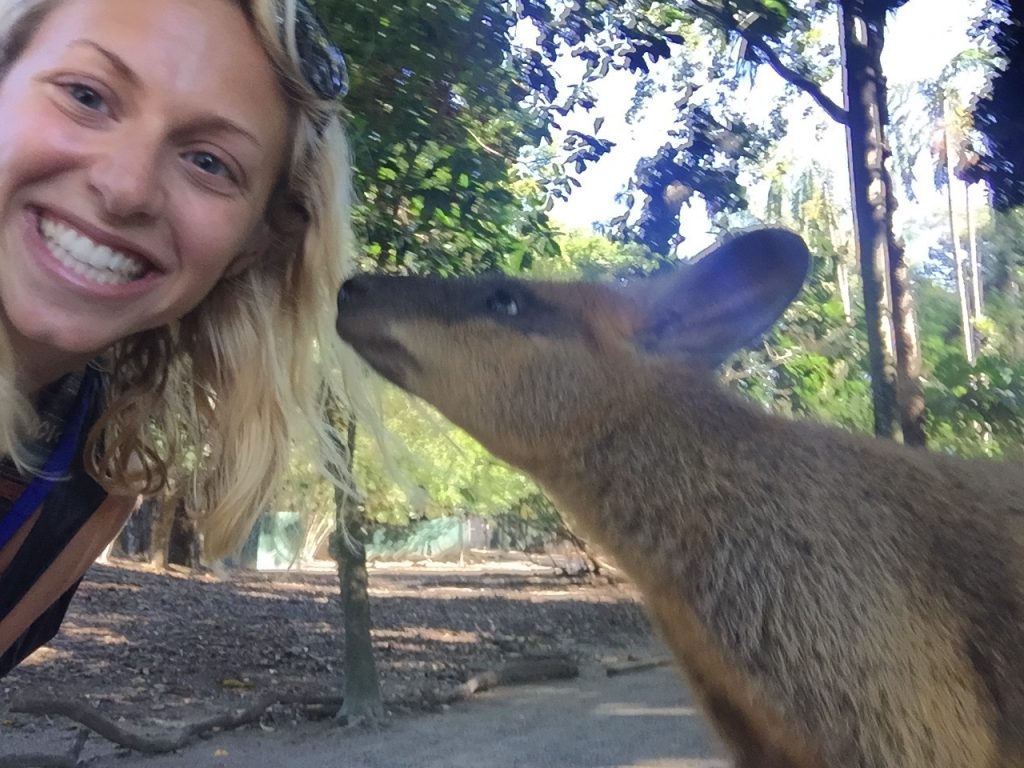 If you wanted a photo with a koala, crocodile, or snake, you could do so for an extra cost. While I passed as I’d already held a koala, many in our group took advantage of this opportunity. 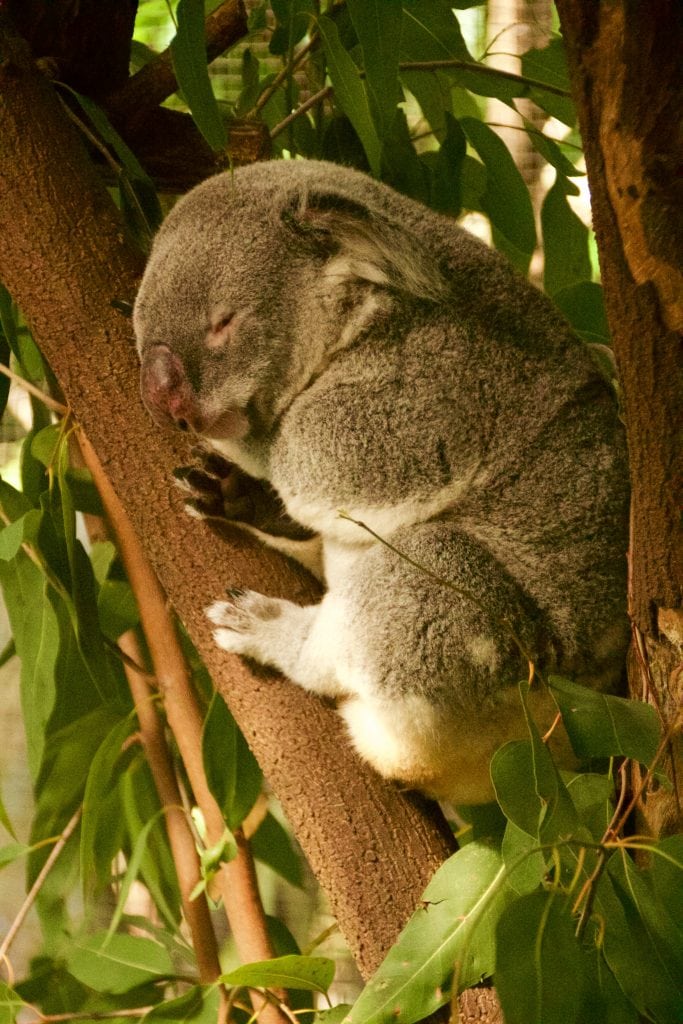 From there, we took the Daintree River Cable Ferry and drove about another 45 minutes to go on the Marrja Botanical Walk where we got to stick our heads inside a tree! 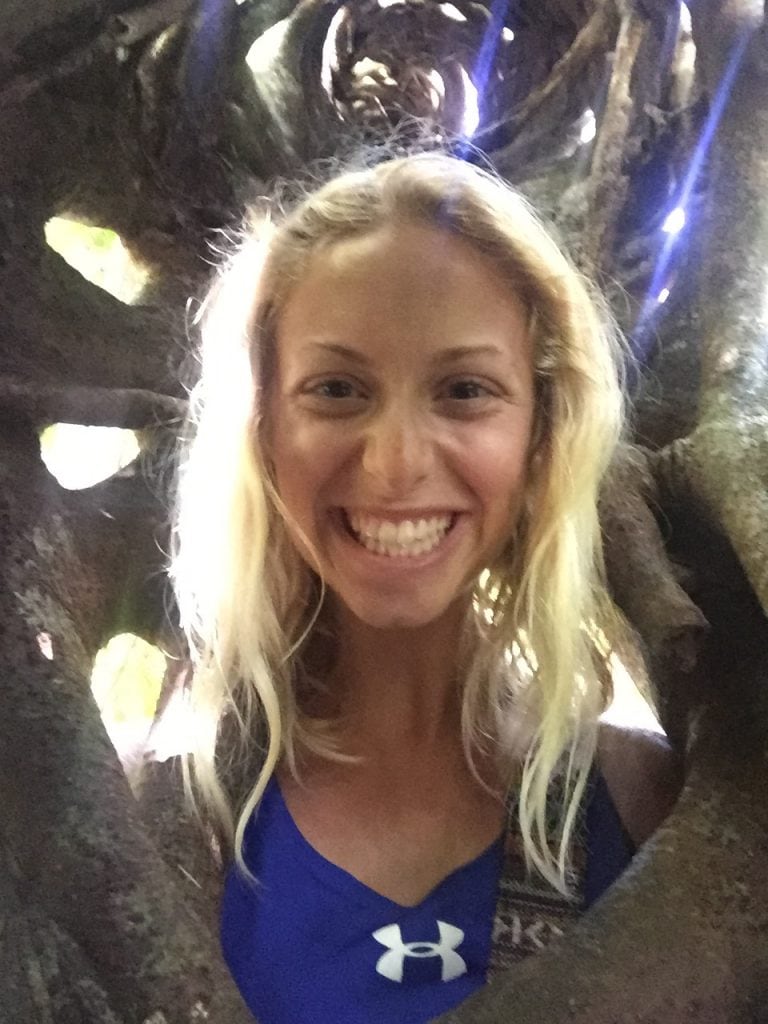 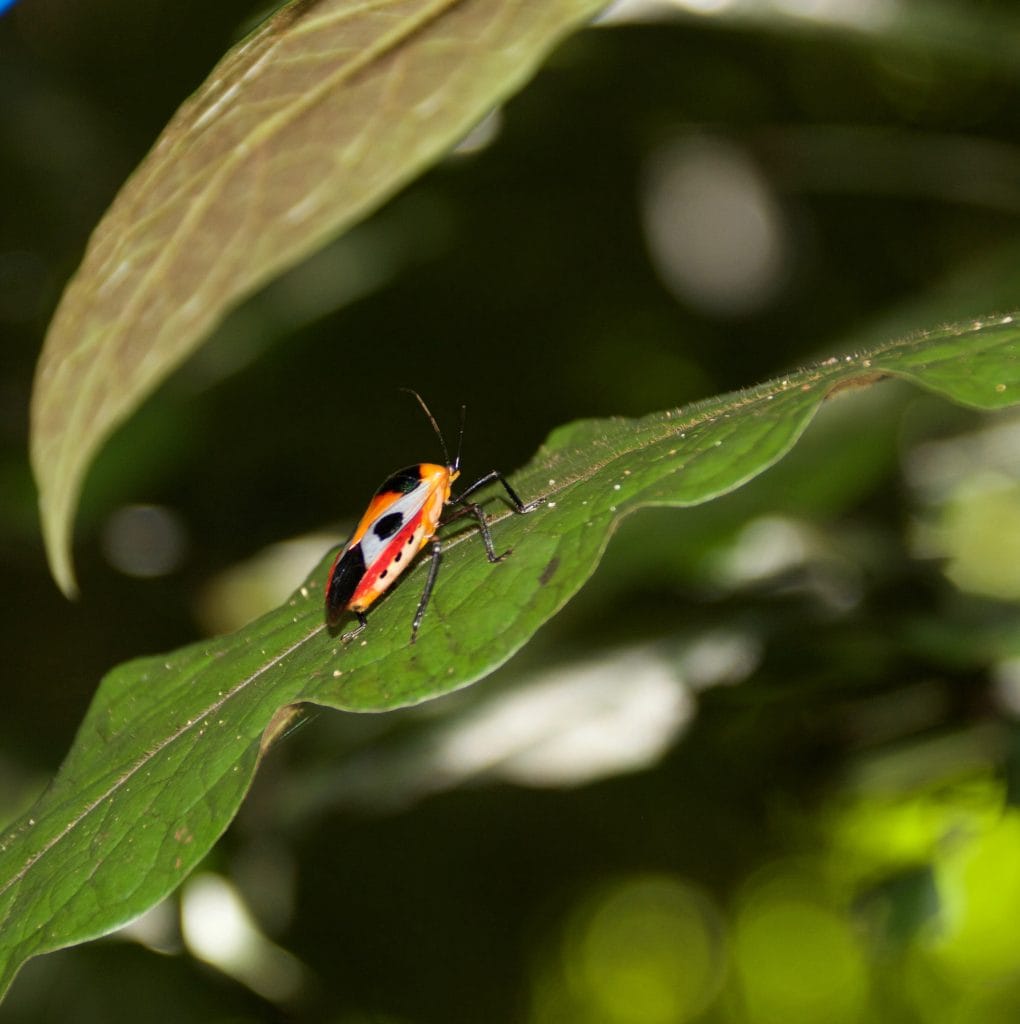 Early on in the walk, Travers asked if anyone wanted to eat an ant’s butt. Excuse me? Supposedly, it’s a thing to lick the booty of a green ant. No one in our group offered to volunteer, and so naturally I had to. The deal was that if he held the ant, I’d lick the butt. Well, I licked the green ant’s behind, it burst, let out a very sour apple taste, and made my tongue all tingly. Quite a way to begin our nature walk! 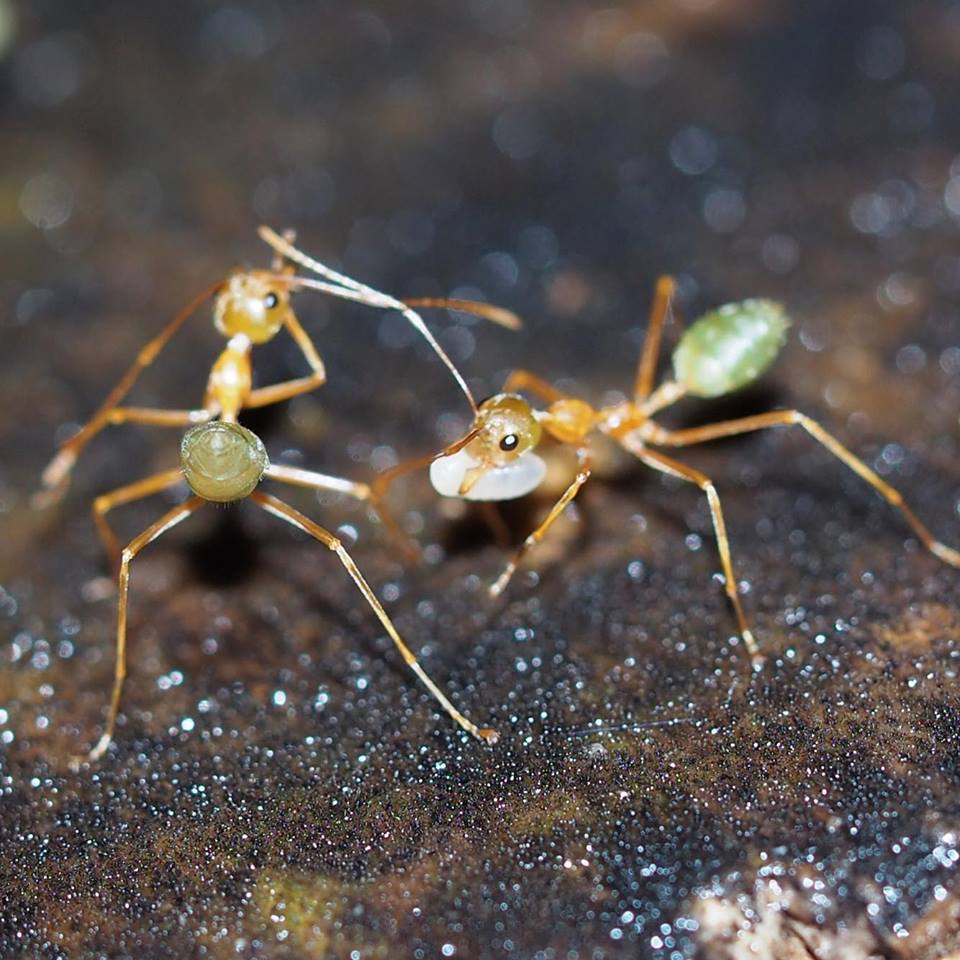 At the end of our walk, we saw a Boyd’s Forest Dragon. This is a type of reptile that is very well camouflaged and usually seen at eye level, or just above eye level, because all of their food sources are on the ground. 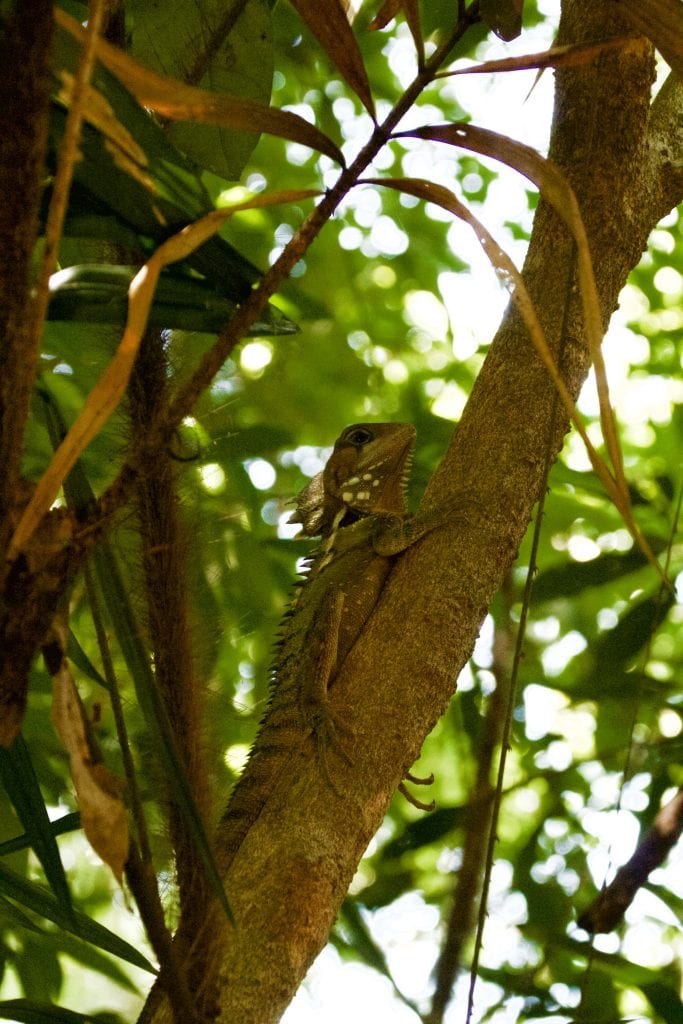 We then entered Cape Tribulation, known for its long, wide beaches and small population. The town was named by Captain Cook, as he wrote that this area of the coast gave him many trials and tribulations because he kept crashing into the reef; he didn’t realize how close the reef was to shore, nor how big it was. There’s also a Mt. Sorrow and Mt. Disappointment in the area, to give you an idea of Captain Cook’s experience… 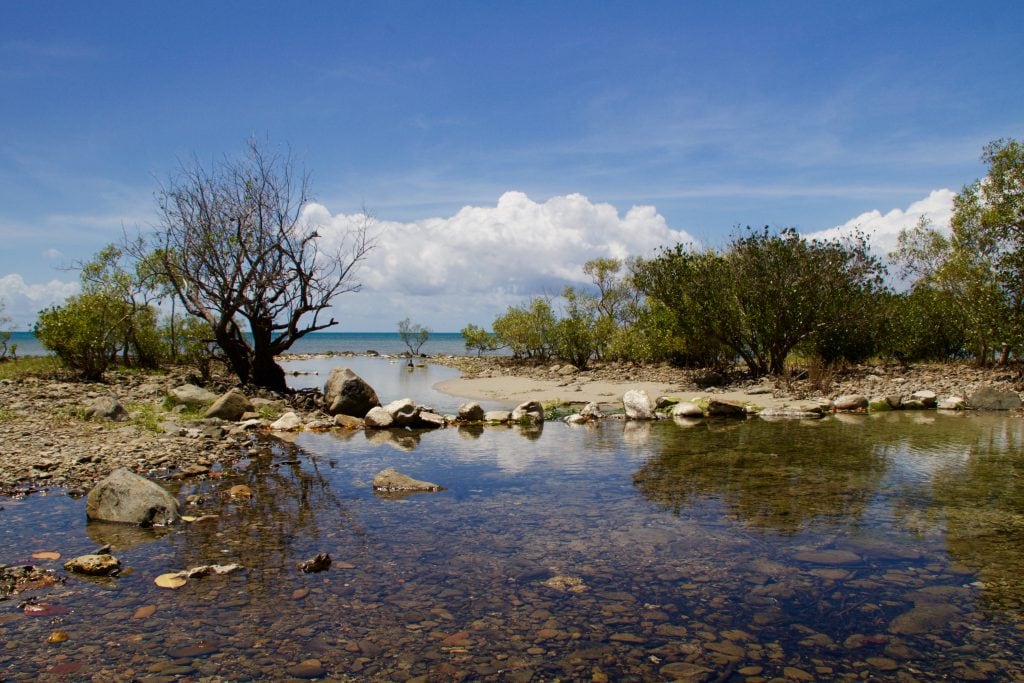 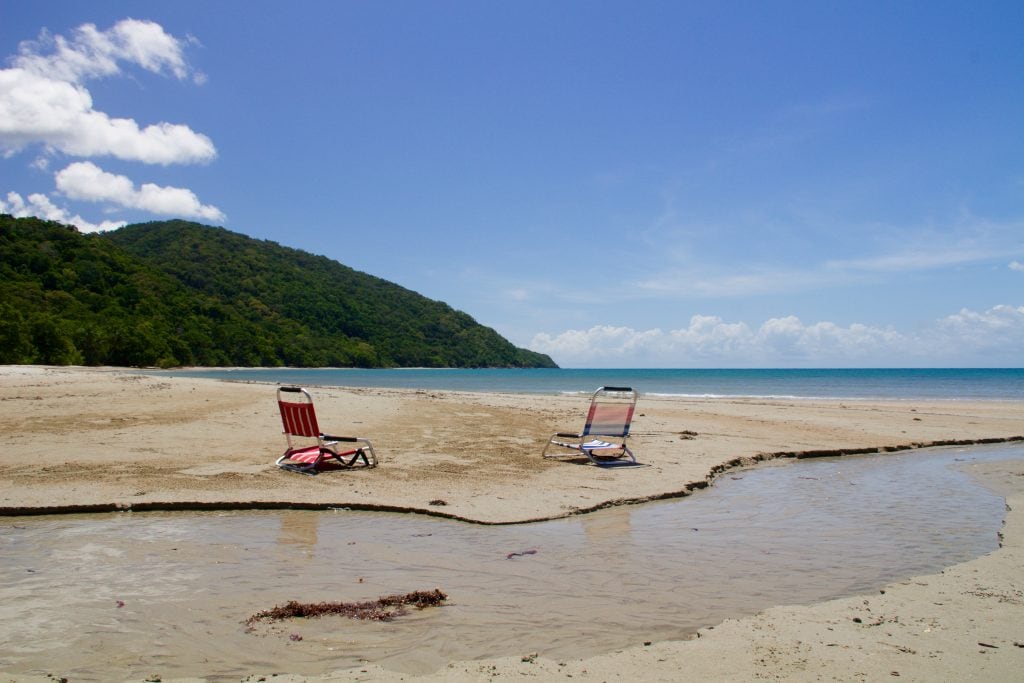 Here, we stopped for lunch at Cape Tribulation Beach House. I had a tasty cajun chicken wrap with fries and salad. 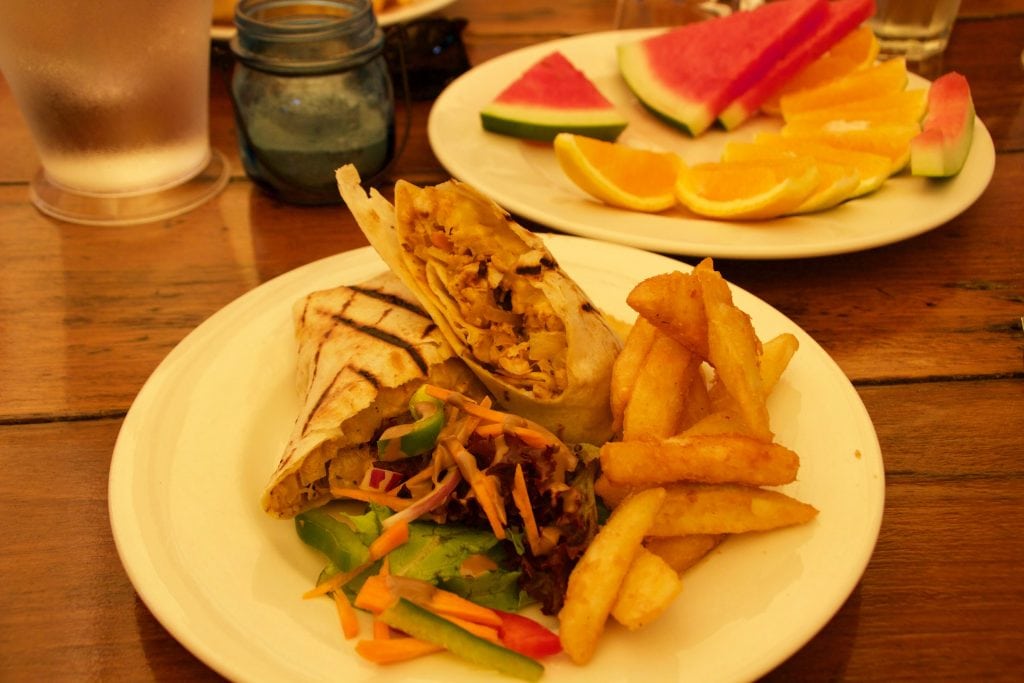 It was then time to go take a look at Cape Tribulation’s lovely, secluded beach. I personally loved the man-made heart most. 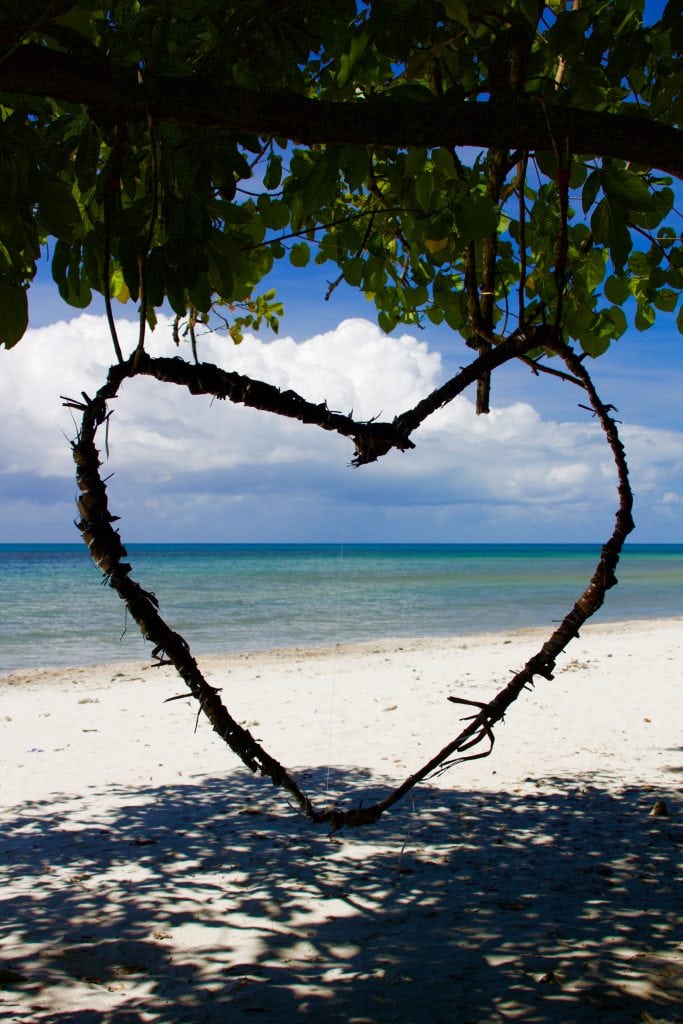 Following the beach, we went on another rainforest walk. Typically we would have done the entirety of the Dubuji Boardwalk, but they’re re-doing the pathway and so only 500 meters was made accessible to tourists. It was a lovely walk nonetheless, and we got to see a few Golden Orb Spiders. 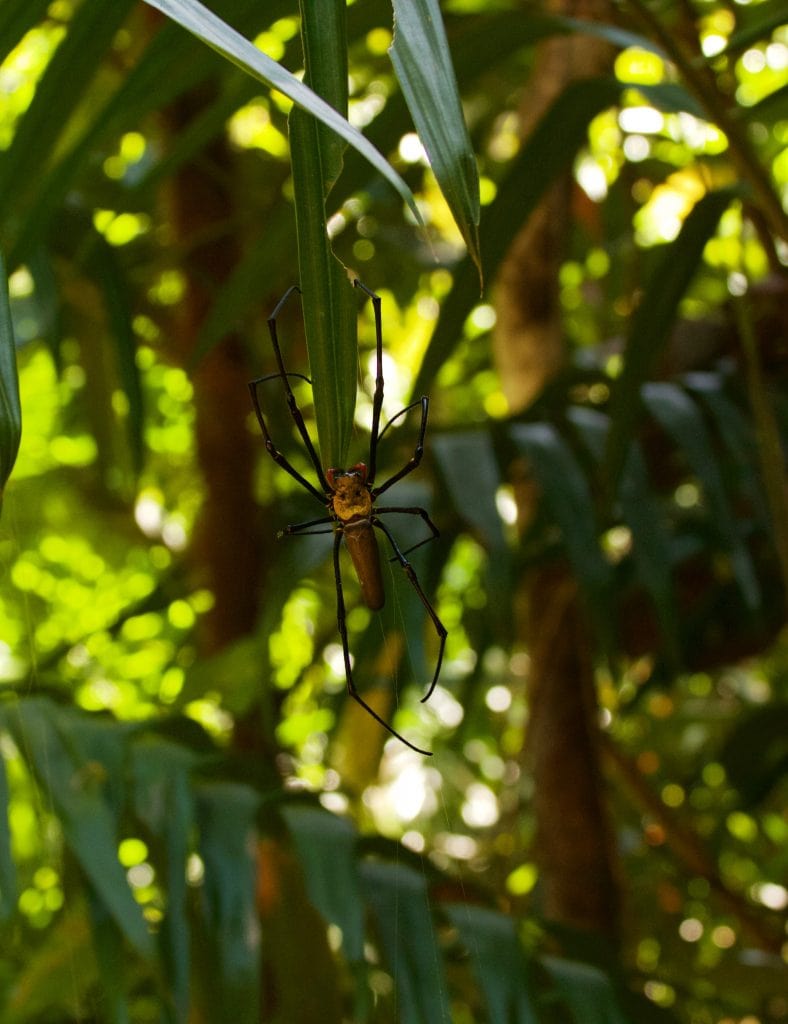 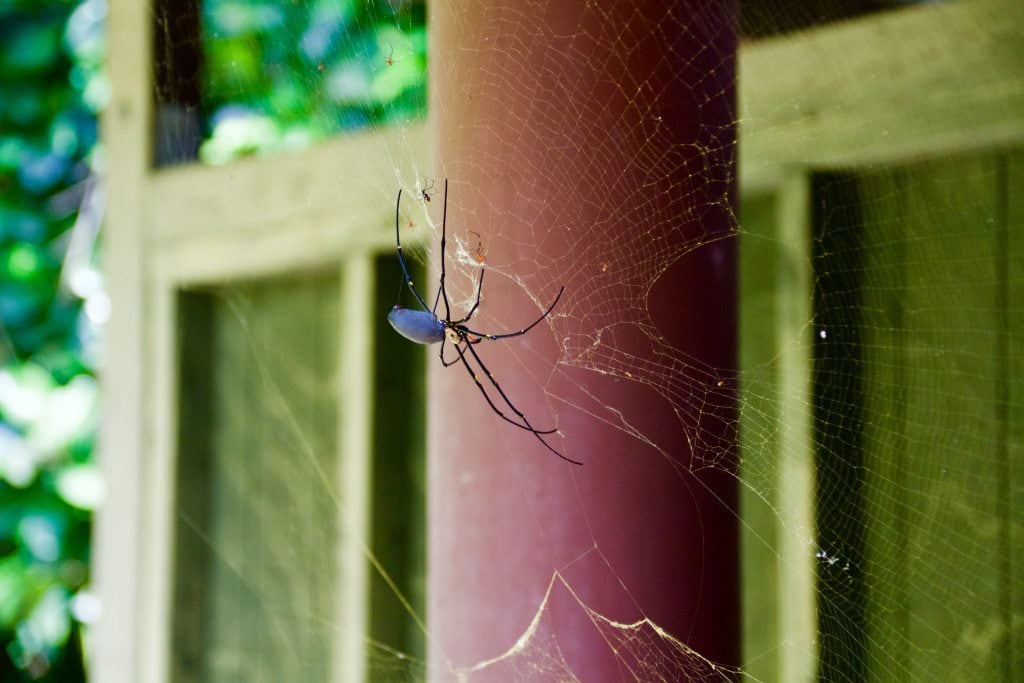 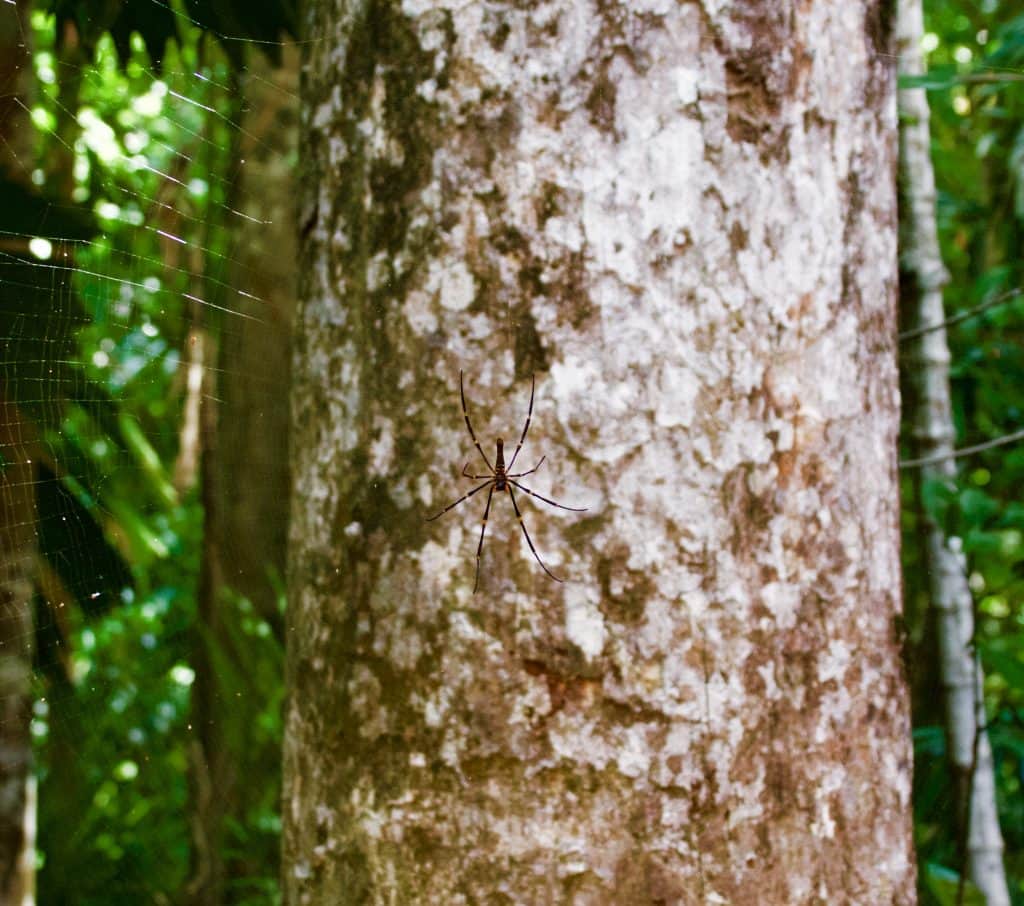 From there, we went to Mason’s Swimming Hole. It was an absolutely stunning little pitstop, and the perfect way to cool down from the heat. We only had about 20 minutes there, but it was a thoroughly relaxing spot to take a dip. 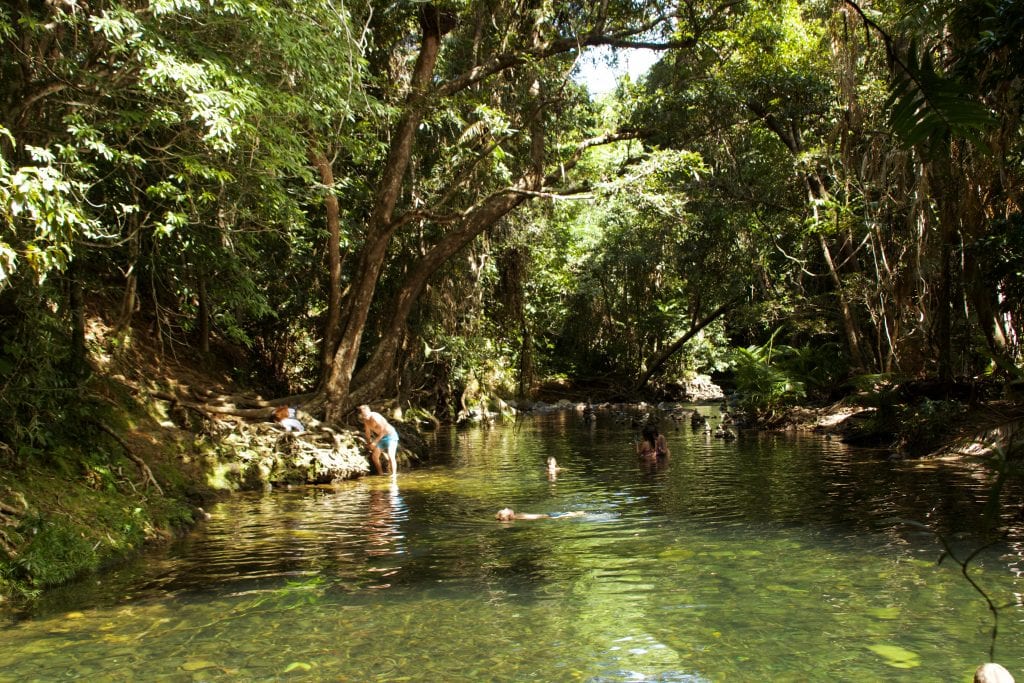 Next up? Floravilla Ice Cream, where all of the homemade ice cream was made with organic dairy by a 70-year-old lady. With 26 unique flavors, I was overwhelmed with choices! Pumpkin and cinnamon? Sweet potato and ginger? Mango and coconut? I ultimately settled on the Daintree Forest — might as well have a flavor named after the area we were currently exploring! Made of lemon myrtle, organic daintree vanilla ice cream, kale, and spirulina, this ice cream was beyond delicious! I wish I could’ve sent some back to my family in the States; it was that good! 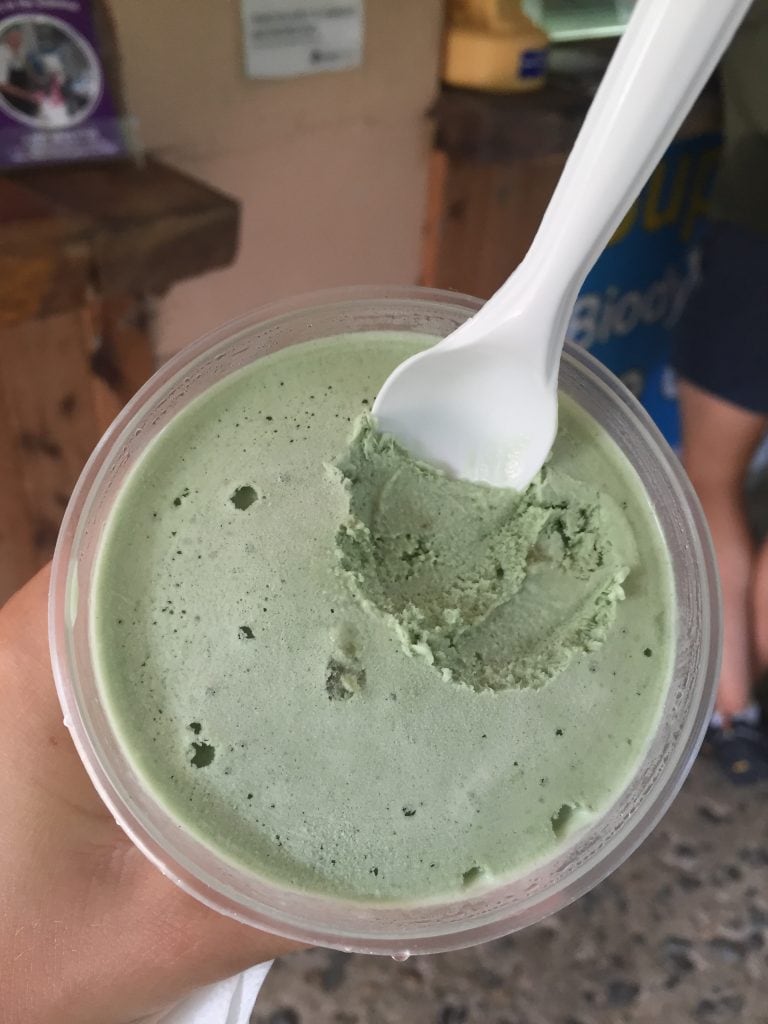 We then stopped for a quick photo at the Alexandra Lookout. This gorgeous viewpoint overlooked the Daintree Rainforest and Cape Tribulation. 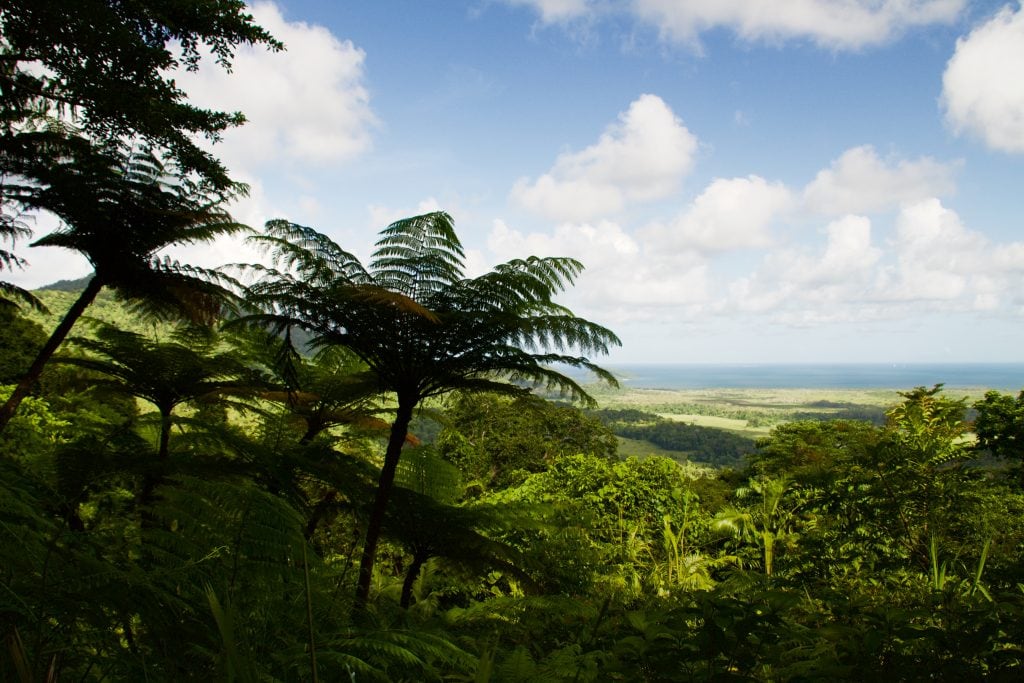 We finished up our tour by going on a cruise down the Daintree River looking for crocs. We saw one fully-grown male, a female that had just given birth, 8 baby hatchlings, and a year-old croc. Female crocodiles only lay eggs every 2-5 years, so we got really lucky! 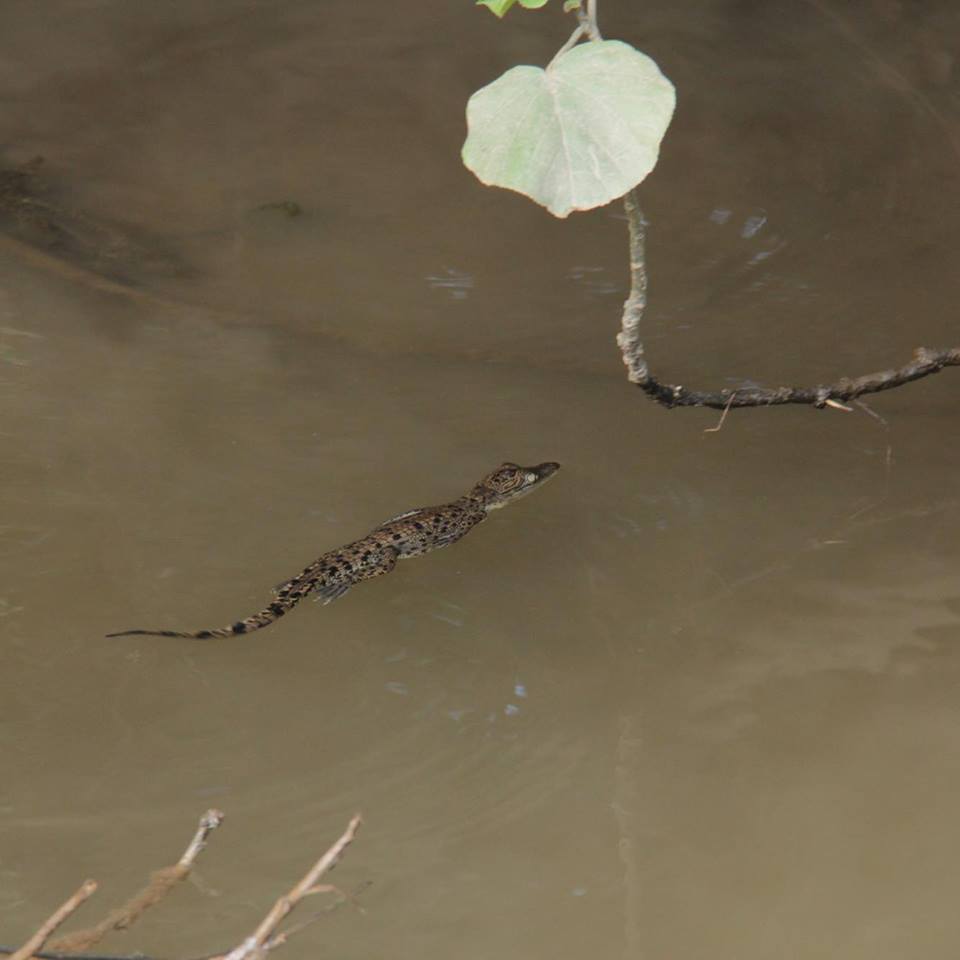 The babies, born six days prior, were far and away the cutest, and quite a highlight of the tour! Pete, our skipper, made sure that everyone was able to see each croc before moving along the river. 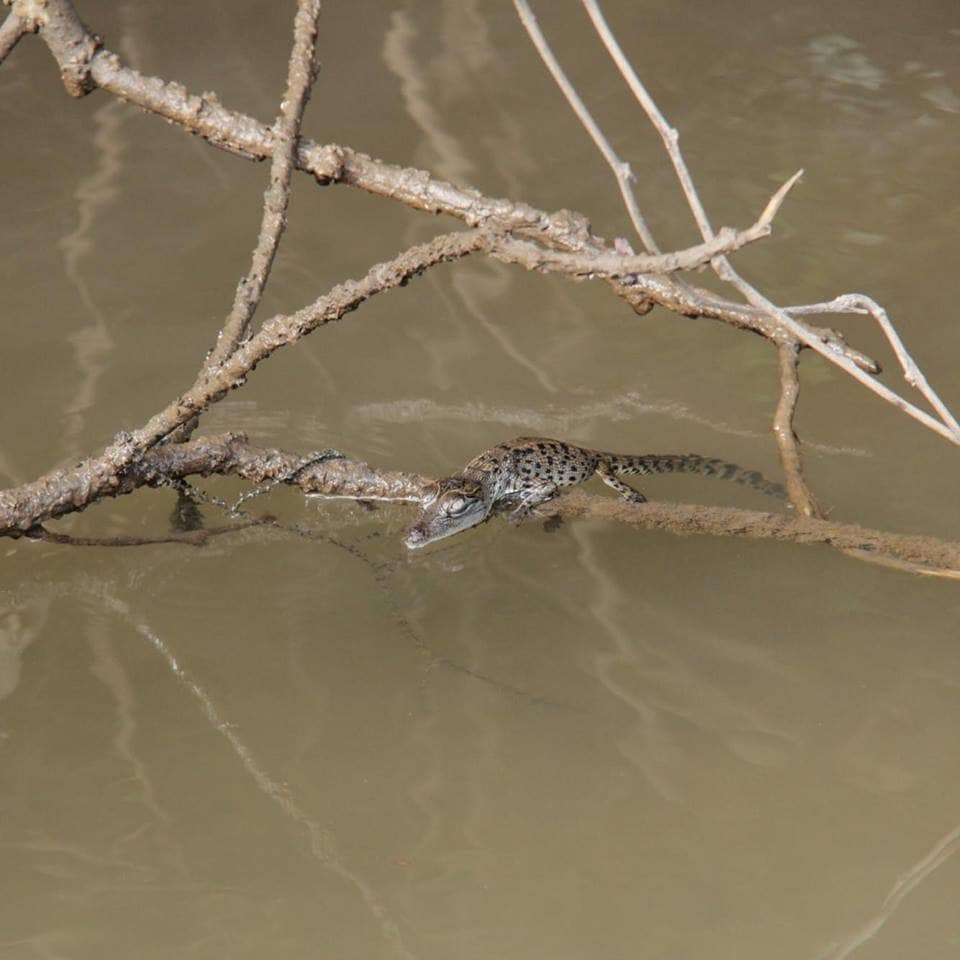 The Daintree River itself is home to approximately 200-300 crocodiles, and there are two species found in the river — Fresh Water Crocs and Salt Water Crocs. This river cruise was a great addition to Jungle Tours and Trekking’s “Go Wild” Tour. 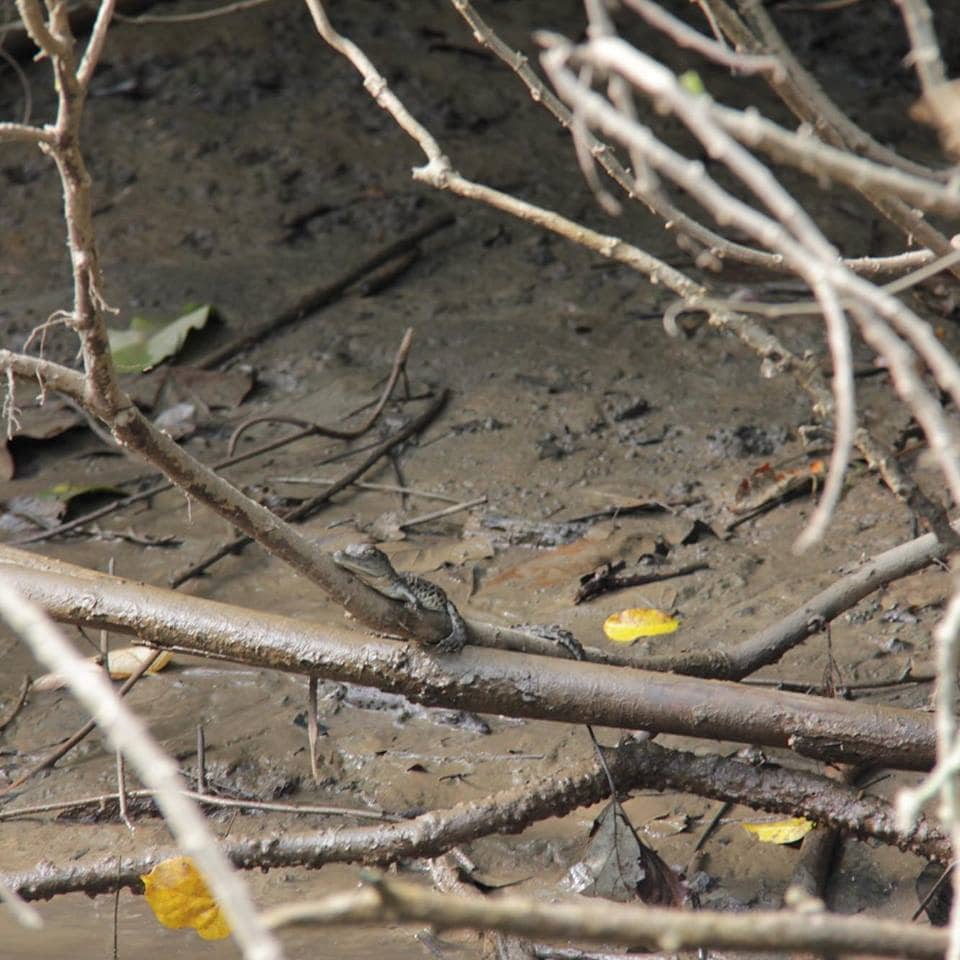 From there, it was a straight shot to drop off people in a few different locations before our drive back to Cairns. We saw a lovely sunset from the bus, and I may not have chatted Travers’ ear off the whole way home…

Interested in the Daintree Rainforest and Cape Tribulation? Pin it Please! 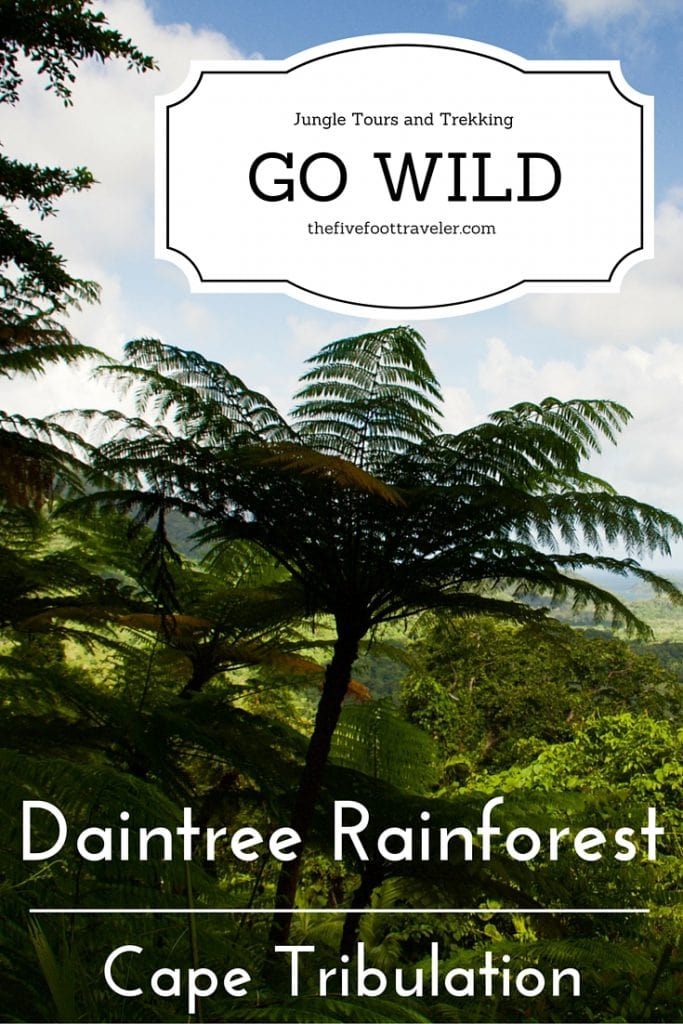 **Special thanks to Jungle Tours and Trekking for sponsoring my experience. As always, all opinions are my own.