With a historical centre deemed a UNESCO World Heritage Site, we decided that Córdoba, located in southern Spain, was not to be missed. Few cities can say they’ve been the capital of a Roman Province, an Arab State, and a Caliphate! Since we only had two days, we knew we wanted to waste no time and stay as centrally-located as possible. If you stay in the main city center, just about everything will be within easy walking distance. 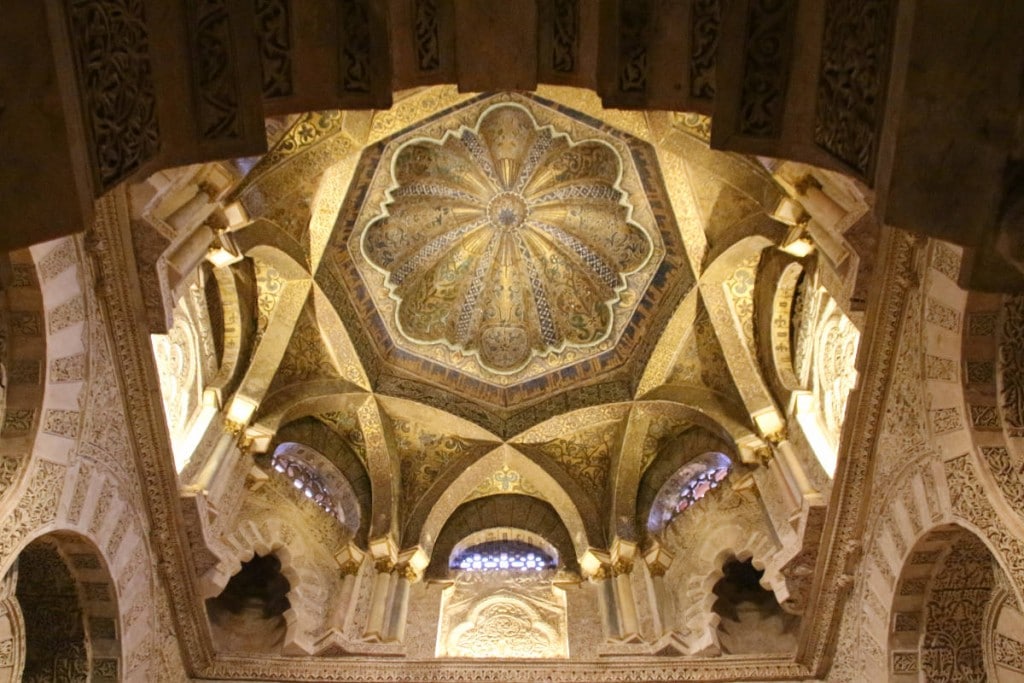 Bed and Be was the right place to cozy up. It is the perfect fusion of a bed and breakfast and a hostel. Think of it as a classier hostel. Located in the heart of Córdoba, Spain, this is the only place I would consider staying. Upon entering, we were greeted by José, the owner of the hostel. He was nothing but gracious, and entirely involved with the proceedings of the hostel. We learned that his dream was to design “the perfect” hostel for backpackers during his own backpacking travels. 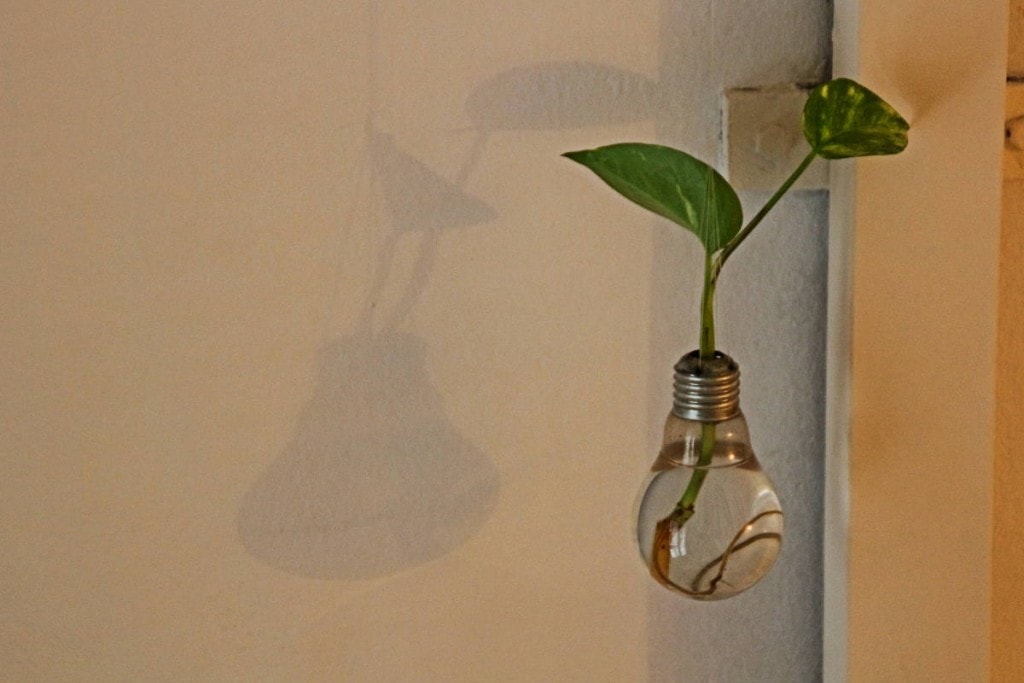 We were taken to our room with a comfortable, lofted bed – definitely something unique for a hostel! We made this little room our home for two days while we explored Córdoba and planned for our upcoming trip to Morocco. 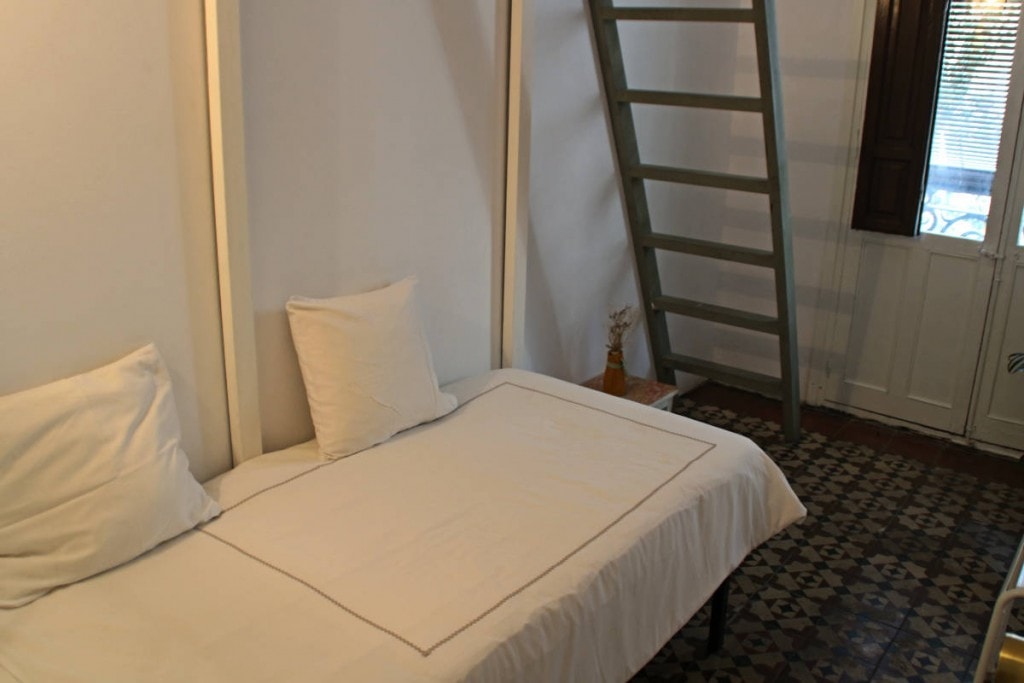 José then went on to give us a tour of Bed and Be. The building was built in 1933 and, despite being recently renovated, retains the original structure and features such as the floor tiles, large windows and high ceilings, and solid wood doors. With all of the interior painted a clean-looking white, this building is artistically simple, with ample space for lounging, cooking, and working (if you please). 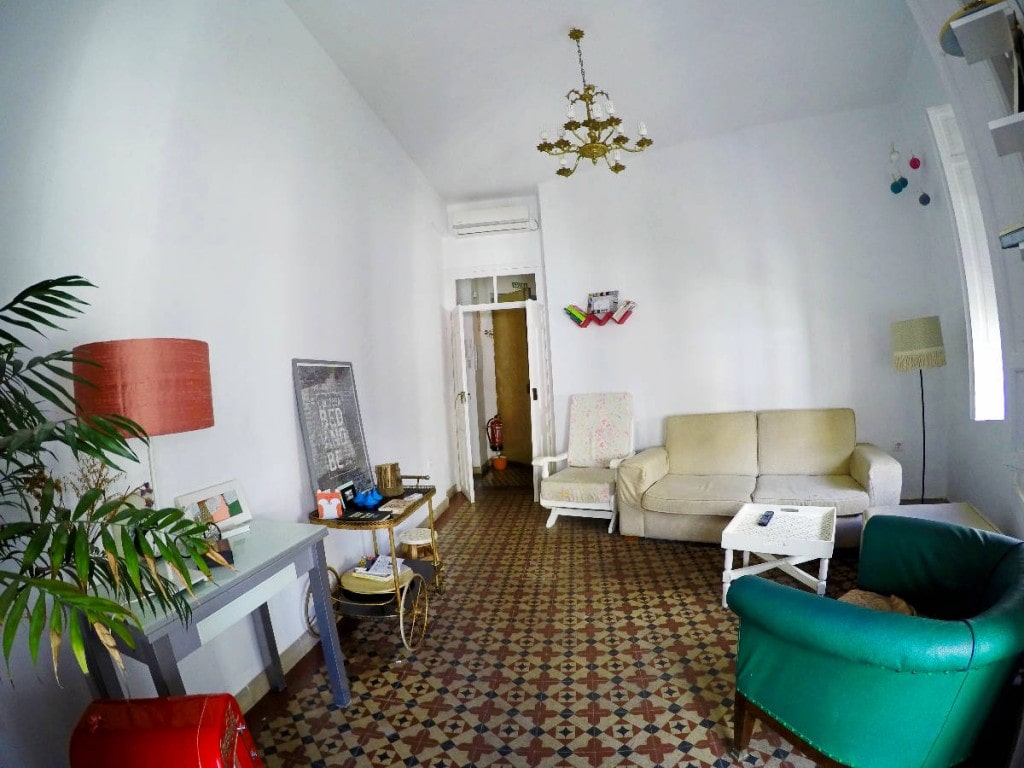 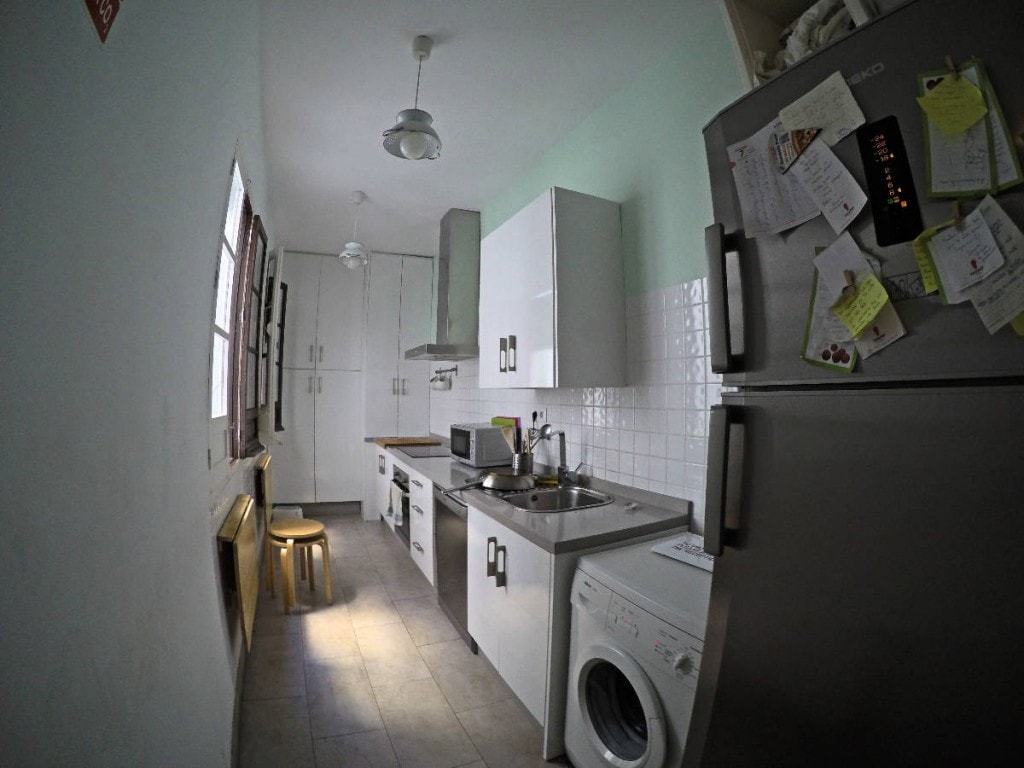 The living room was warm and pleasant; the place to hang out, however, would be the roof on a beautiful day! It’s nicely decorated, with plenty of places to sit and soak up the sun, or, if you’re a blogger like me, plenty of tables on which to write surrounded by the architecturally amazing Spanish buildings. 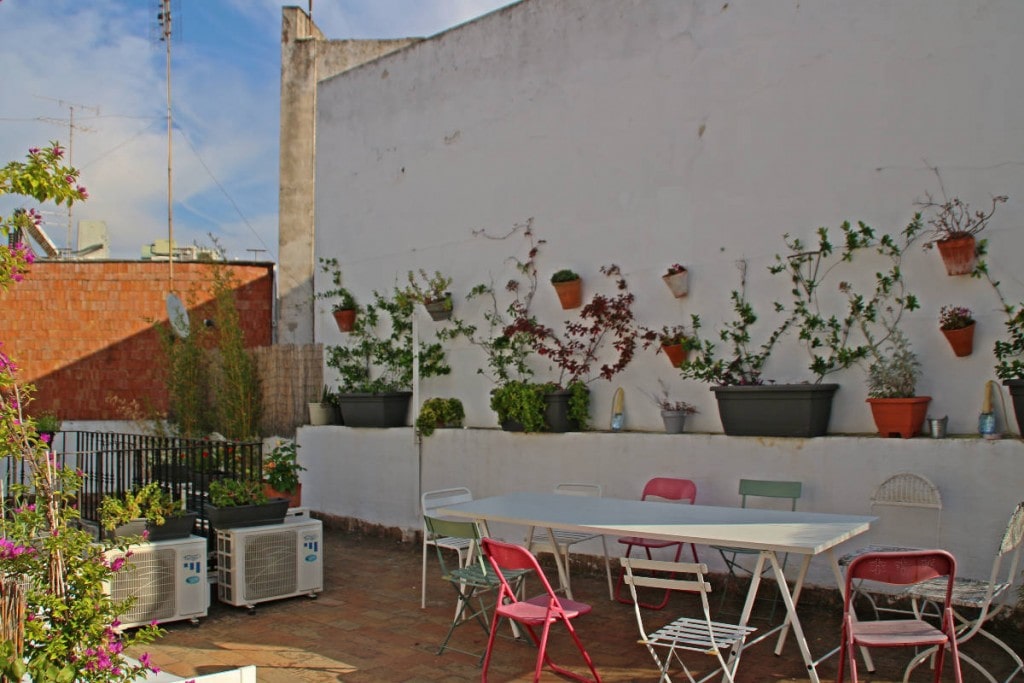 Since the sun was shining, we decided to wander Córdoba for the rest of the day. While the number one attraction is La Mezquita, the Mosque of Córdoba, we held off until the following morning. We learned at check-in at Bed and Be that you could enter Córdoba’s Mezquita for free from 8:30-9:20am everyday but Sunday! Instead, we walked down the street of José Cruz Conde directly to the rest of the main attractions. Córdoba is a city to be wandered.

Our first stop was the Roman Bridge. Did you know that this bridge appears in Game of Thrones? I didn’t! There was actually a drone filming while we were there. At the end of the bridge, one can see a triumphal arch and single-columned monument. Juxtapose that with the Mezquita behind it, and it’s a beautiful site to see! 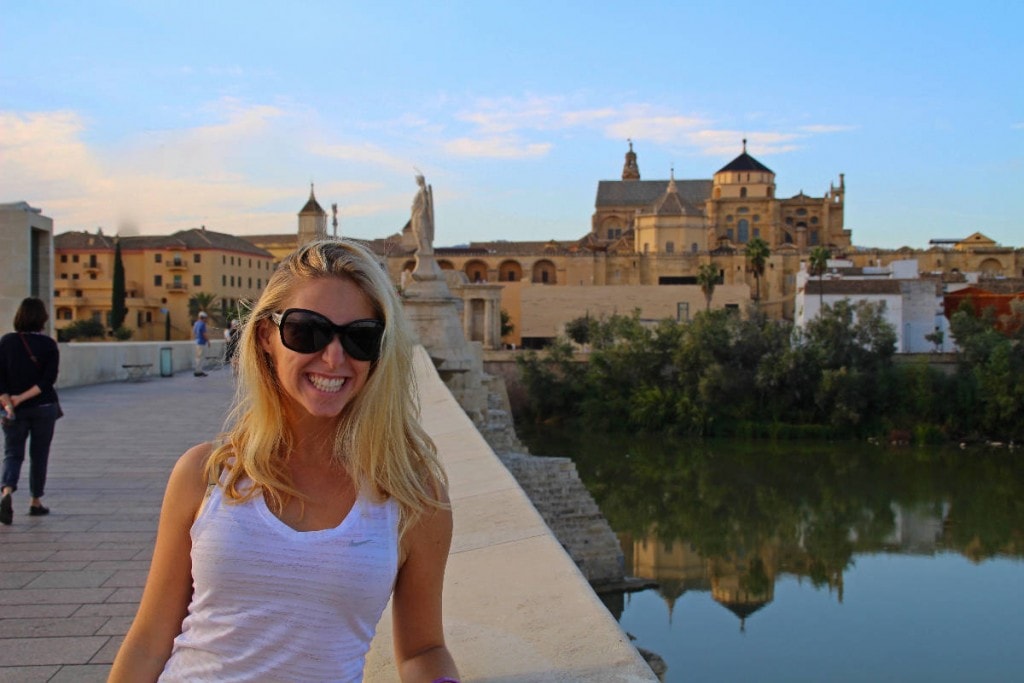 From the Bridge and surrounding areas, we walked past the Alcazar de los Reyes Cristianos. While we chose not to enter, this Alcazar was built in the 8th century under the Caliphate regime before being the residence of Christian Monarchs Ferdinand and Isabella.

Continuing on, we checked out Calle de las Flores – a recommendation given to us by José. It’s a beautiful narrow street lined with bright flower beds. Walk to the end of the corridor for a fantastic view of the Mezquita’s Tower framed by the flower pots. 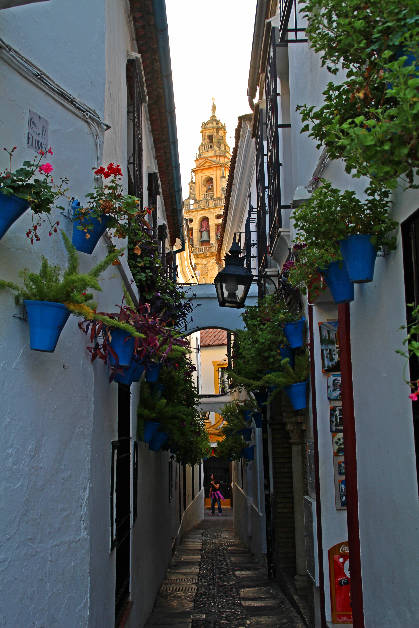 Another must in Córdoba is to get lost in the Jewish Quarter. Made of tiny, winding streets, shops overflowing with people, and more food options than imaginable, this area of town is quite a bit of fun to explore and dates back to the late Middle Ages.

We strolled up the main street back to Bed and Be for an early night in our loft, since we had to be up bright and early in order to enter La Mezquita for free! We slept soundly and woke up to a modest spread for breakfast. 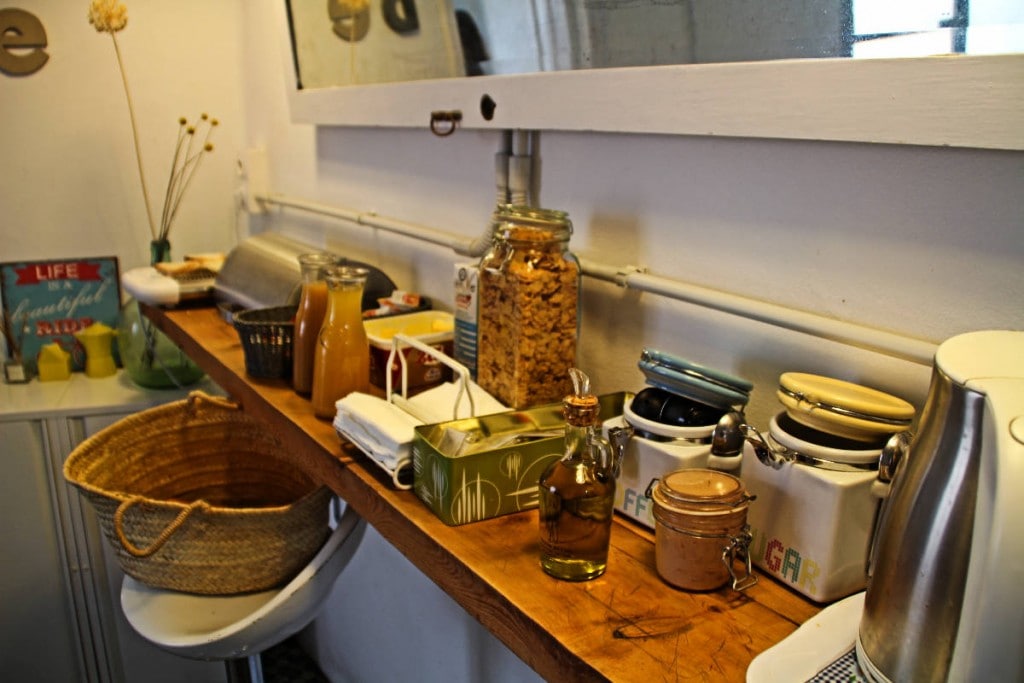 After filling up, we made way to La Mezquita, observed the Patio de los Naranjos (Court of Oranges) filled with orange trees, and were in awe upon entering. This “Mosque turned Cathedral” was absolutely beautiful and visually appealing, with its high ceilings and arched columns. I could only imagine what it looked like at the height of Córdoba’s power! 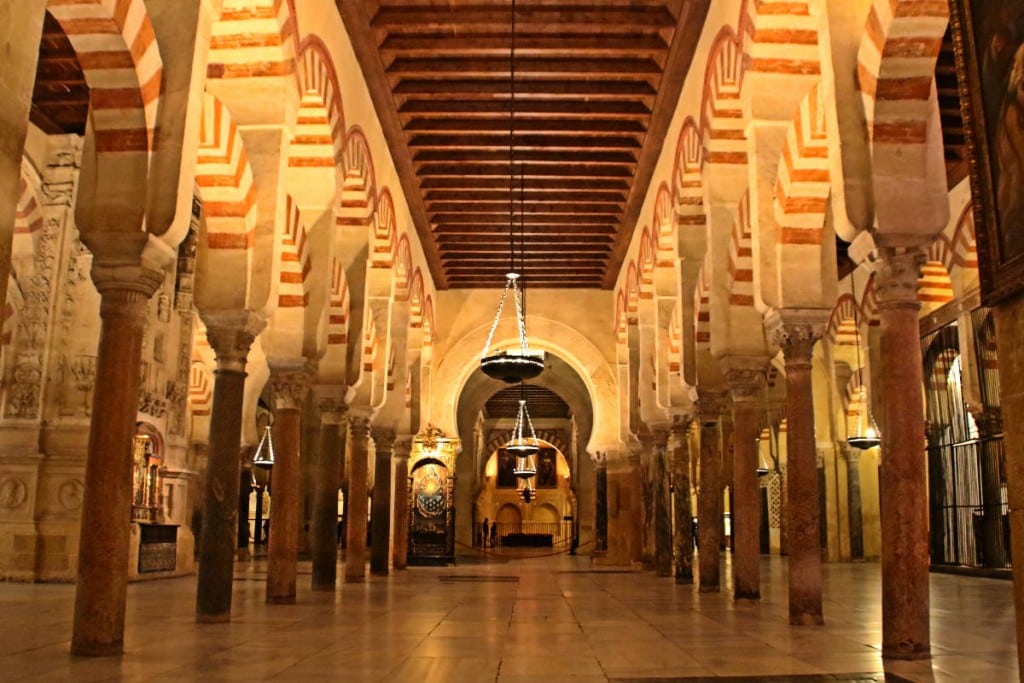 La Mezquita was originally built as a mosque in 786 under the Muslim rule, before being converted into a church in 1236 under the Christian Reconquista. Despite having been converted, this church still retains much of the original muslim structures and Arabic writings. Overall, the building is exceptionally Moorish (minus the fact that the minaret was replaced by a bell tower). Spend some time in this beautiful structure, but do note that they kick you out at 9:20am on the dot if you’ve entered for free. 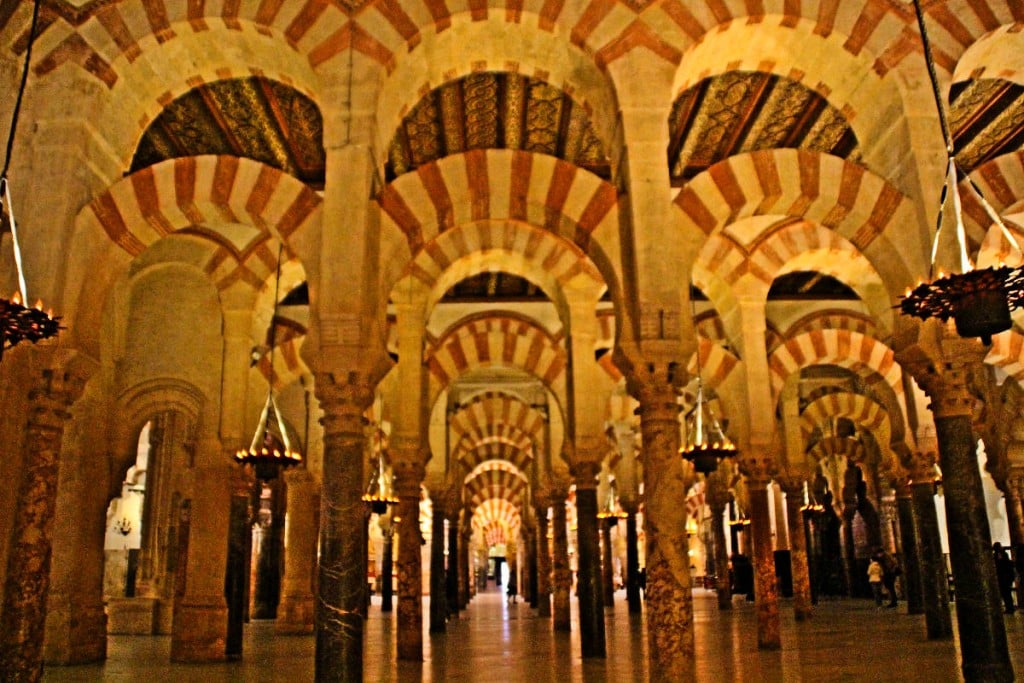 Sadly, our second day in Córdoba was raining, and so we utilized our time to plan our Moroccan journey. Later that evening though, we joined a wine and tapas tour led by José. Every night, José leads this “pub crawl” of sorts, free of charge, as a means to better know his guests and to shed light into the fantastic hole-in-the-wall tapas bars that Córdoba offers. I have never seen an owner interact so thoroughly with his guests, and it made me that much happier to know I was supporting an honest businessman. We had a lovely time out, and ended our tour at Tranquera Market. Did you know that bull tail empanadas are quite popular in Córdoba? How unique! 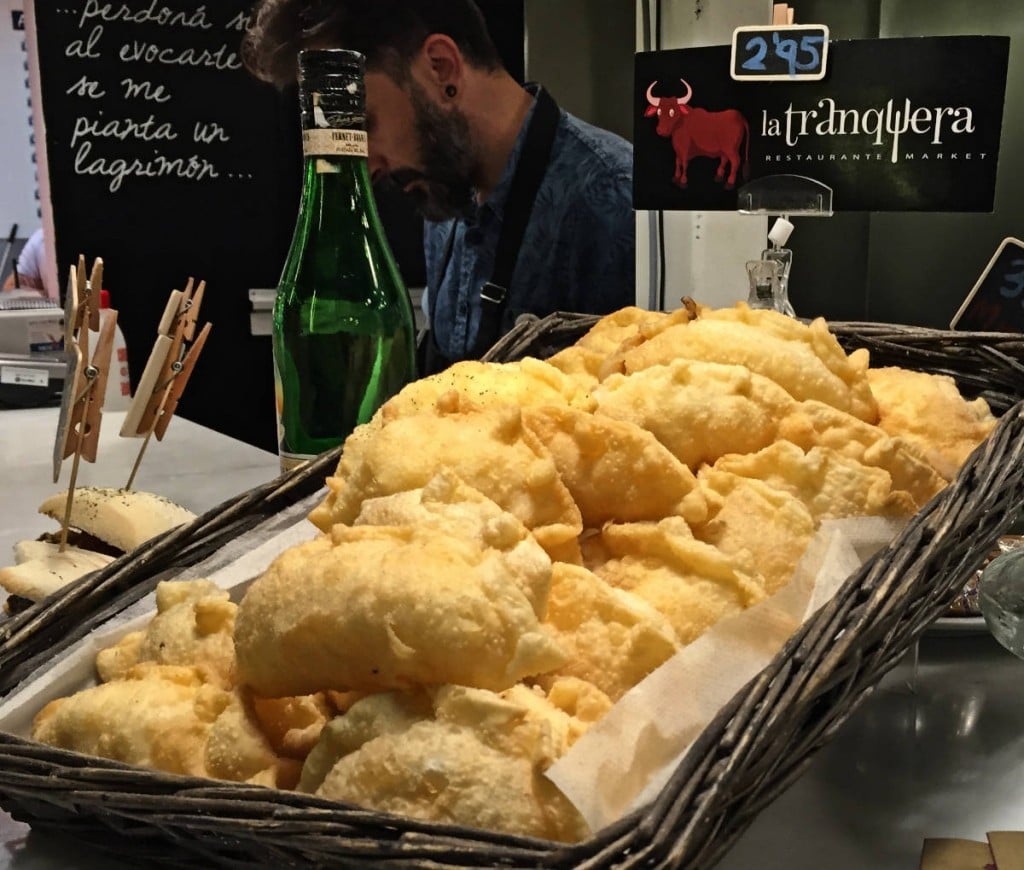 After a fabulous stay at Bed and Be, we said our goodbyes and continued south. Thanks for such a great time José! 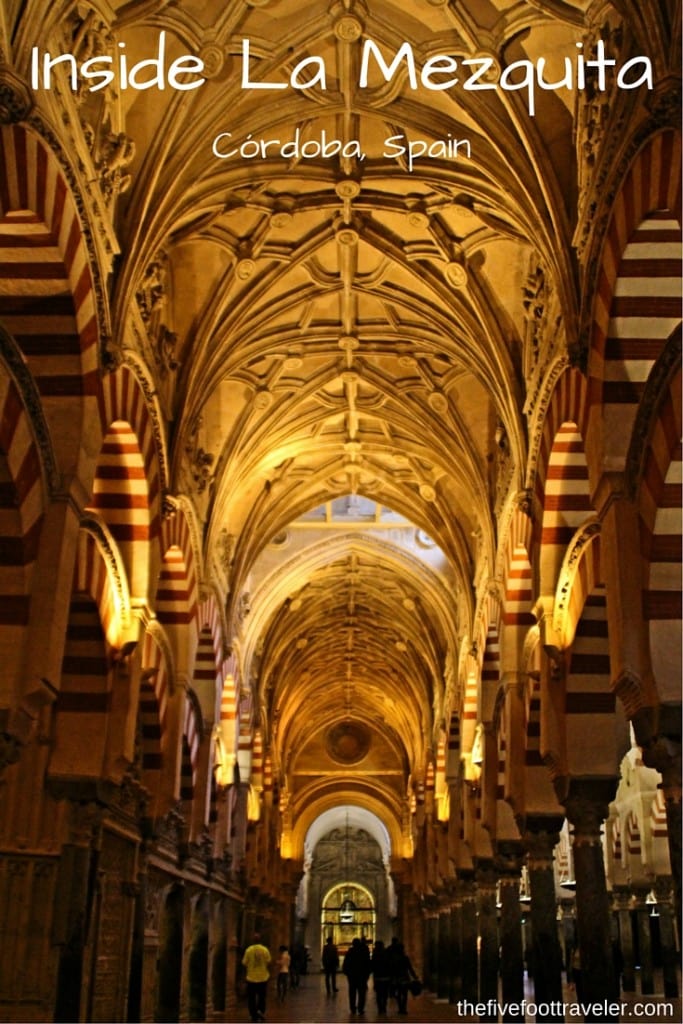 **A very special thank you to José & Bed and Be for offering us a complimentary stay. As always, all opinions are my own.