Bosnia and Herzegovina has a traumatic past, and only in recent years gained its true independence. When traveling through the country thanks to UniRent, and specifically through Sarajevo, I strongly advise taking a War Tour to educate yourself on Bosnia’s very recent, turbulent past. Many different companies offer a War Tour of and around Sarajevo, however, the Complete Sarajevo War Tour, led by Ervin of Toorico Tours, completely blew me away.

Quick Facts About the Sarajevo Siege

What Brought About the Sarajevo Siege?

Sniper Alley vs Road of Life (Show a Video)

When Sarajevo was under siege, the main road of the city was referred to as “Sniper Alley.” The Republic of Srpska set up shop on top of many tall buildings and shot at anyone trying to cross the alley. (Photo taken from Google Images). 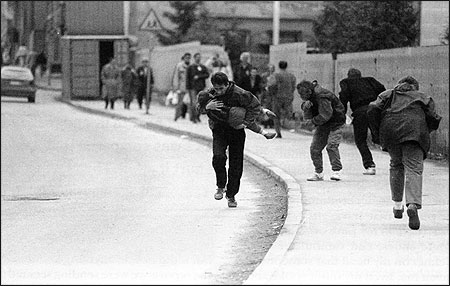 There was, however, the Road of Life, a section of Sniper Alley that had concrete blocks and metal containers that tried to help protect people from the snipers. 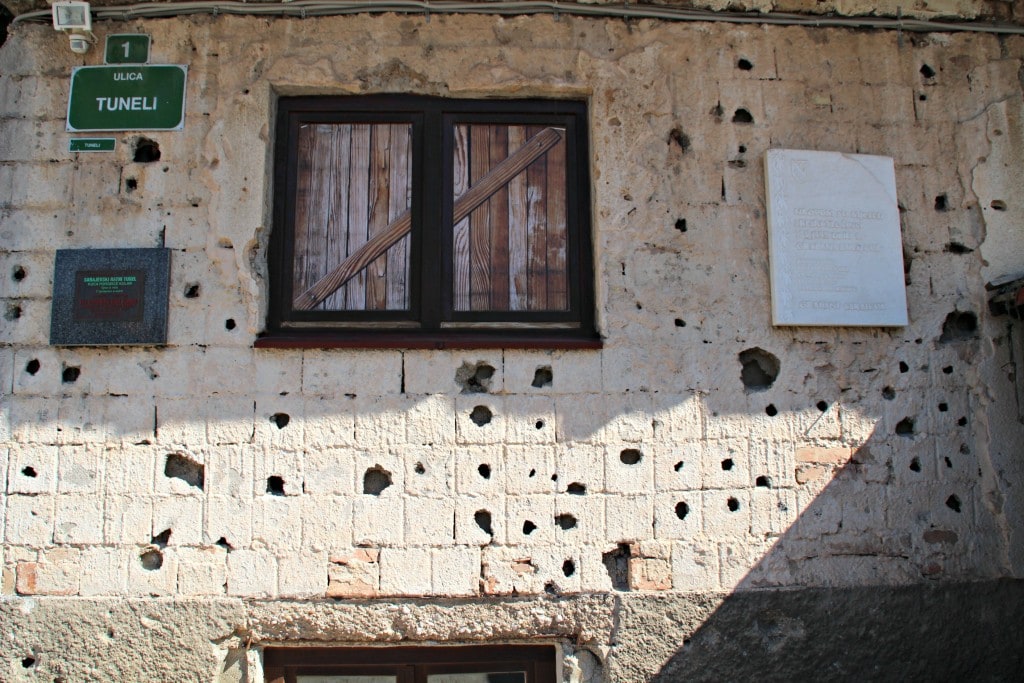 Come the end of 1992, the Bosnians decided to build a tunnel from the outskirts of Sarajevo, under the airport and runway, and out onto the Bosnian controlled territory on the other side of the airport. The Bosnian Army began building from both the rural side and the urban side, converging in the middle when the tunnel was complete on July 30, 1993. The ultimate goal was to give the Bosnian Army access to Mt. Igman, the only mountain surrounding Sarajevo that the Bosnian Army controlled. The length of the tunnel was 800 meters (half mile), the average height was 1,6 meters (5,3 feet), the average width was 1 meter (3,3 feet). It took four months and four days to build the tunnel.

After the tunnel was built, the UN considered flooding it (and the Republic of Srpska tried!). Some of those Bosnians snuck into Croatia for supplies, but trucks had to drive with their lights off so as not to get shot.

We went to visit the Sarajevo Tunnel with Ervin, and he stopped outside the rural entrance to point out one of the Sarajevo “roses” — red paint splattered around the crater made from the impact of a mortar shell to represent the bloodshed. There were originally  around100 designed around the city, but there are only about 10-15 roses left today. 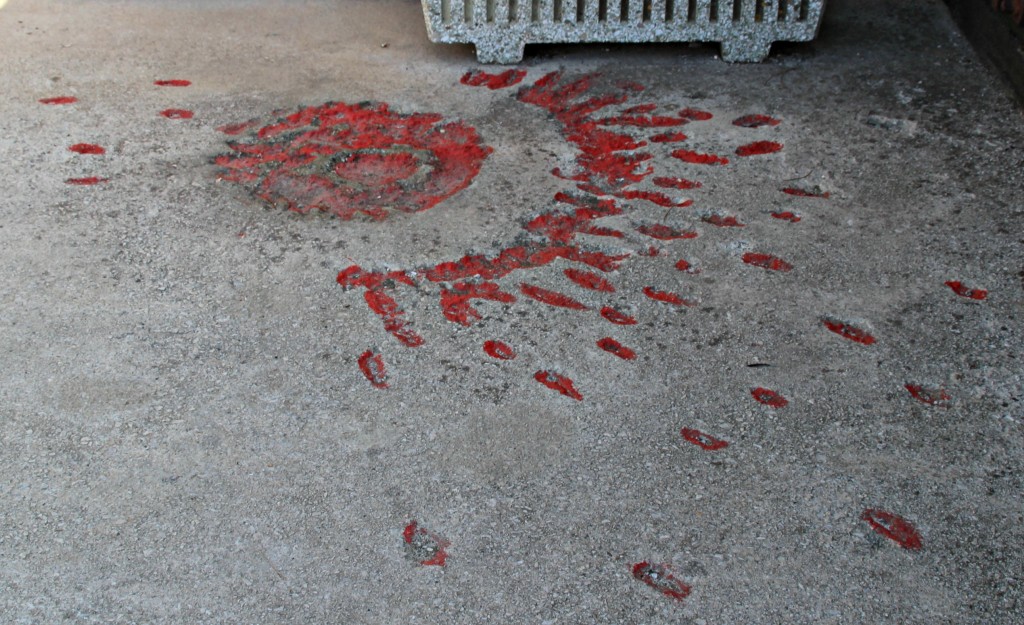 Outside of the tunnel three flags fly: the old flag of Bosnia (which has medieval origins), the new flag given by the international community (with an infinite number of stars with the triangle representing the Bosniak Muslims, Bosnian Croats, and Bosnian Serbs), and the coat of arms of the army during the war times. 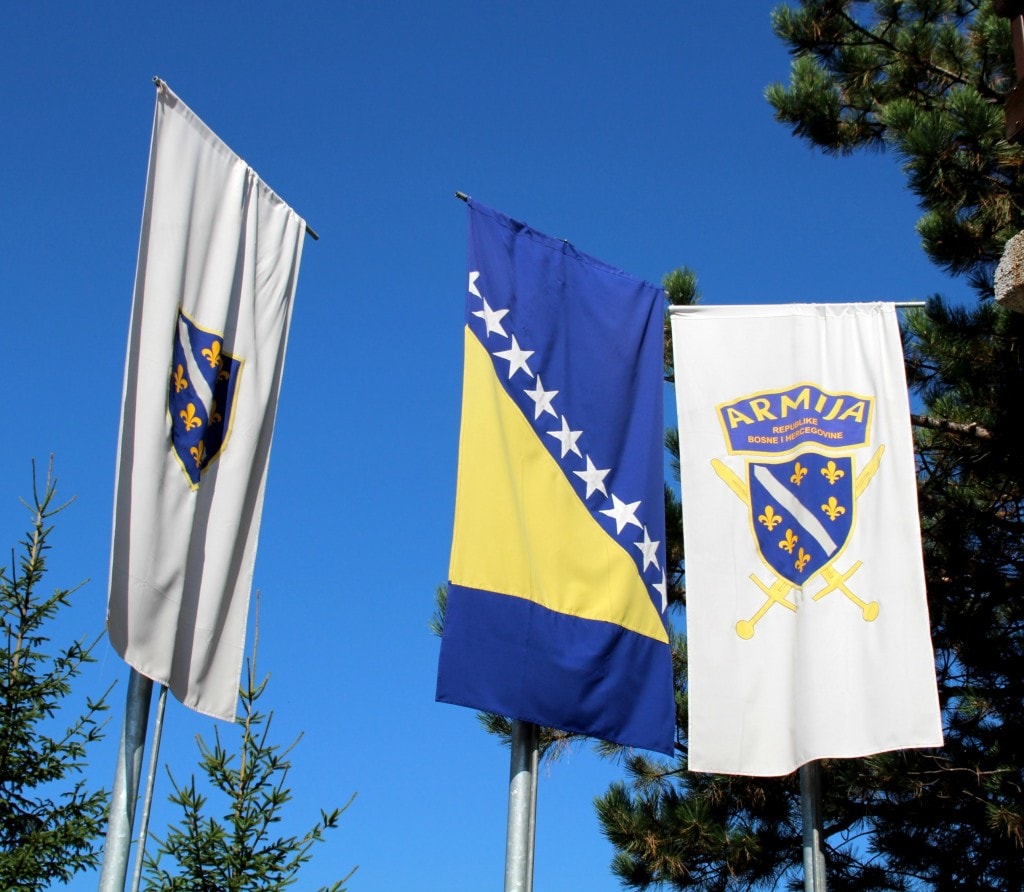 We then had the opportunity to walk through parts of the original tunnel. Inside the tunnel, you can see the railway tracks that were used to manually push ammunition, food, supplies, and wounded people; the petrol pipeline increased telecommunications and the electricity cable ranges. It was dangerous to have those cables though — sometimes the army would be walking in water knee deep with high voltage cables in the same tunnel. 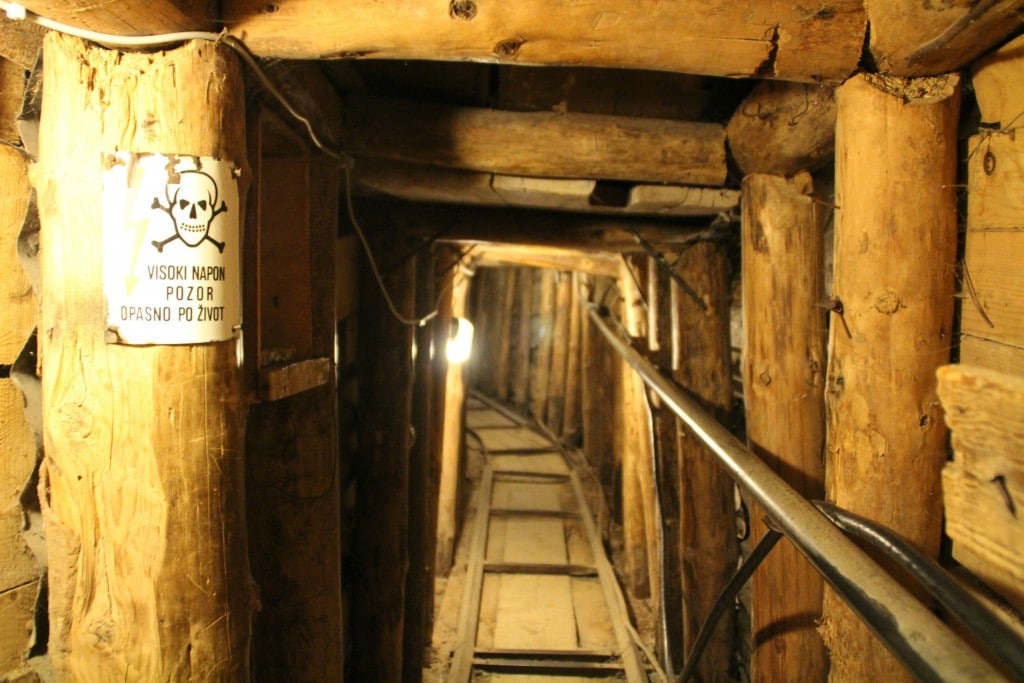 The smuggled weapons taken through the tunnel came from different sources: part from Islamic countries, part from the black market, and part of them seized in the offensive attacks. Approximately 3,000-4,000 people were going through the tunnels daily — largely soldiers, since civilians technically weren’t allowed to use the tunnel. To be in the tunnel, barely big enough to accommodate even my small size, and to see the high voltage signs, made the siege very real to me: the fear, the claustrophobia, and the desperation.

Bosnia and Herzegovina are known for having landmines. When traveling there, you’ll instantly be advised never to stray from the path to avoid accidentally stepping on a landmine. 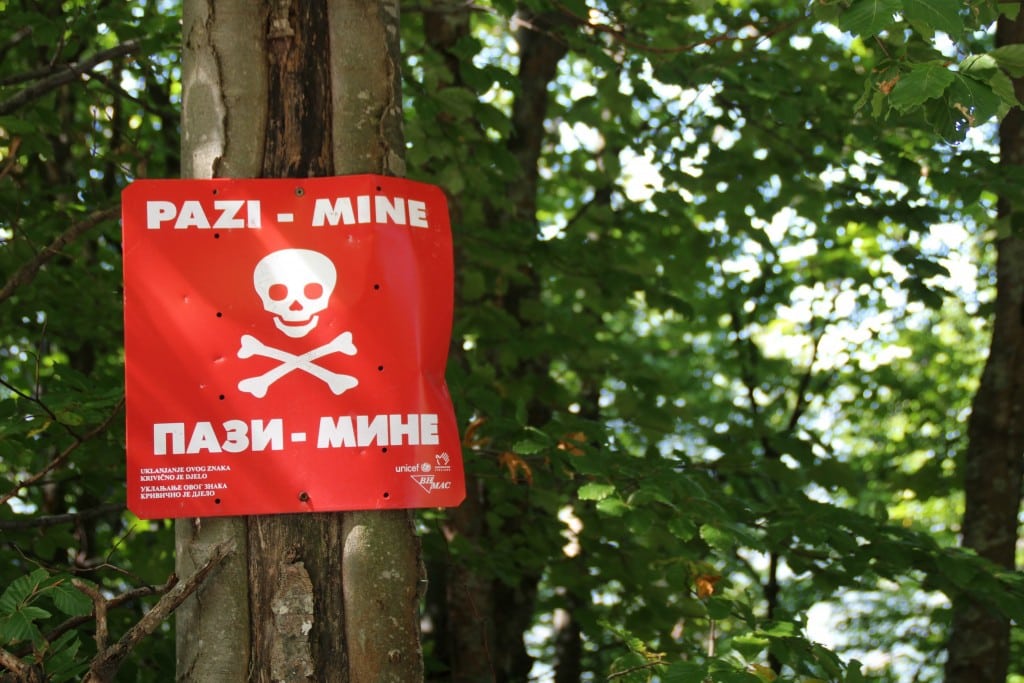 They were originally placed along front lines, mainly by the Republic of Srpska forces.Today, 2.4% of Bosnia and Herzegovina is still landmined; last year, six people died from landmines. In fact, a shepherd died by stepping on one earlier this year.

Halfway through our tour, we went to Hotel Igman, which was built in 1983. The Republic of Srpska almost made it to the Olympic Ski Jumping Hills during their invasion, but they retracted and instead, burned this hotel in 1993. They set fire to Hotel Igman to prevent the Bosnian Army from using it as a base. To prevent trespassing, they even put signs reading, “Watch out! Mines,” surrounding the property but Ervin told us the reason it was put there is to keep people from trespassing. 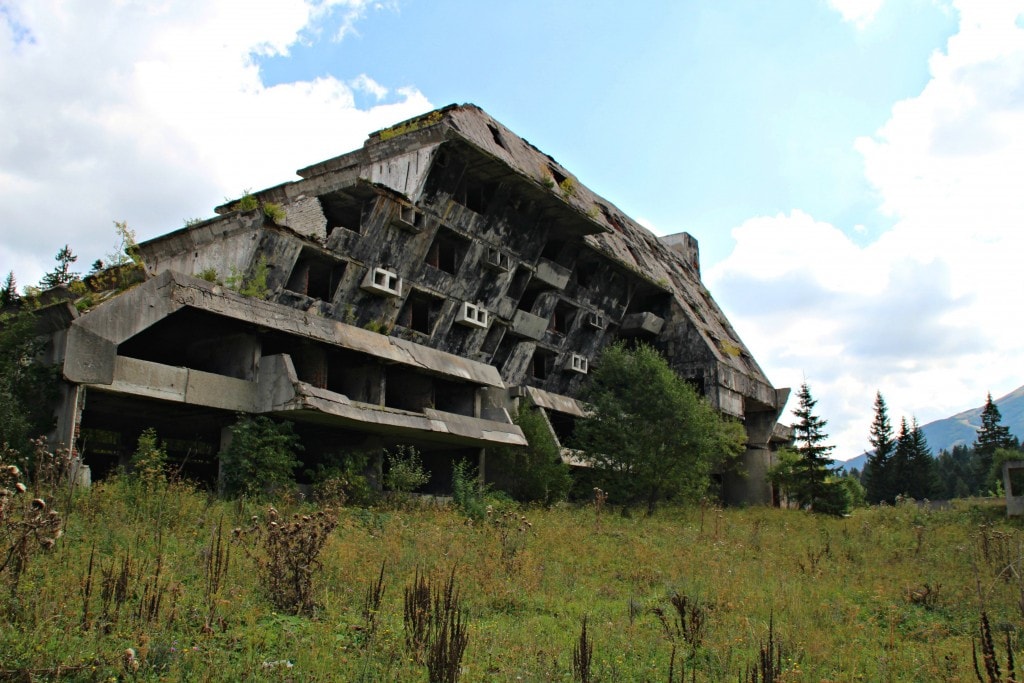 We explored the abandoned and destroyed hotel, and ate lunch on the premises. Once a part of the Olympic Village, this multi-million dollar hotel used to be something beautiful. Now, it lays in shambles, and we were able to take a walk through the building to try to experience what it once was.

What is the Republic of Srpska and how does it influence Bosnia & Herzegovina?

For this reason, there are three official languages: Bosnian, Croatian, and Serbian. A Cyrillic alphabet and a Latin alphabet, although the three languages sound virtually the same. 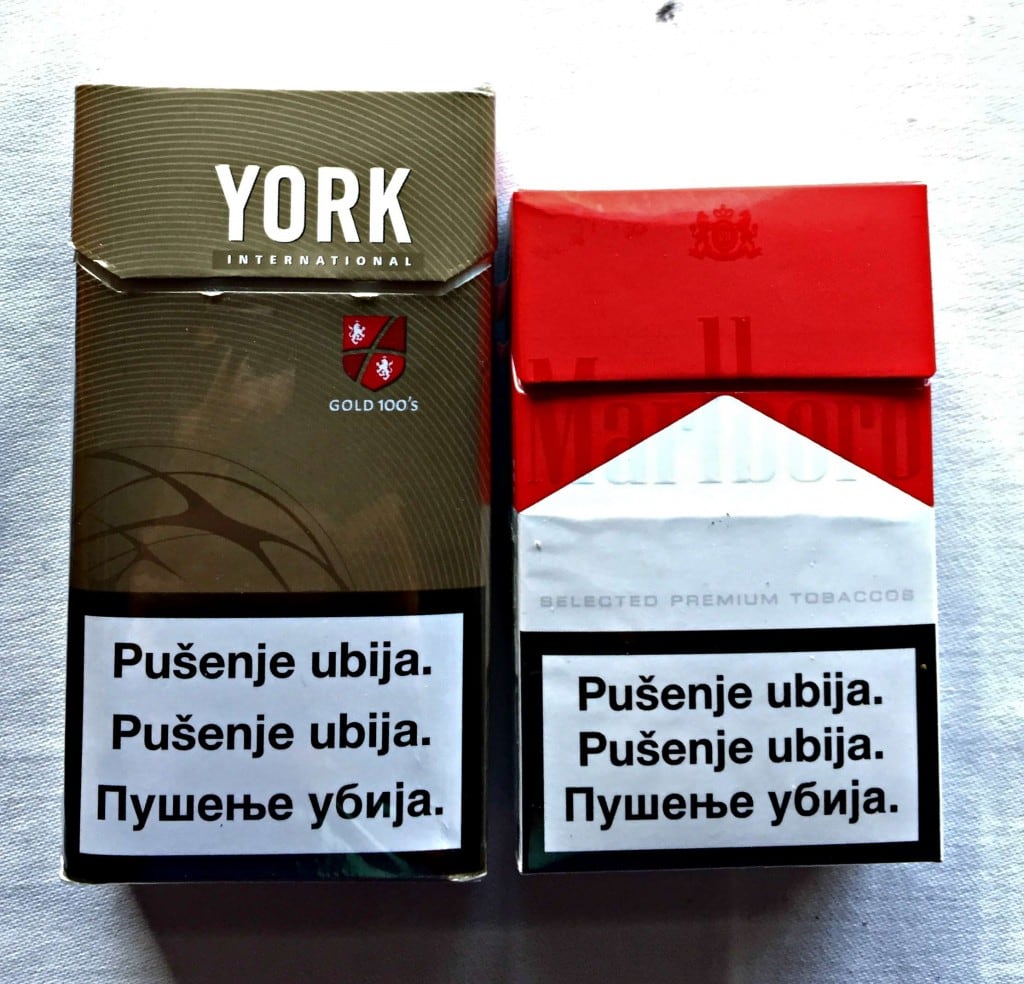 Officially, Bosnia and Herzegovina is independent, but it’s a fine line. Unofficially, the man that the UN Security Council appointed (High Representative of International Community for Bosnia and Herzegovina) has the right to block any law, impose fines, etc. He has quite a bit of power, but he was appointed to help maintain peace in the country.

5FT Fun Fact: After the war, various countries of the European Union tried to help Bosnia and Herzegovina rebuild, starting with their public transportation. Countries began by donating their trams, so there are trams from Vienna from the 1960s, Prague from the 1970s, and the Netherlands and Istanbul from the 1980s – it’s like an outdoor museum of European transportation over the years.

What else did we see on our tour with Ervin?

While we were on the Complete War Tour, we did see some sights that were representative of the aftermaths of the war.

We began our day by going up to the Yellow Bastion to orient ourselves with the beautiful city that is Sarajevo. From this viewpoint, we could see an Ottoman cemetery from the 15th century; the chimney of the only brewery in the city that supplied water to the city during the Siege when the Republic of Srpska shut down the water supply; a newer cemetery for Muslim soldiers that died during the Bosnian War; the (Institutions of Bosnia and Herzegovina) Holiday Inn; the national TV broadcasting building that was used for satellite footage and shelter; and the Old City Walls. The Yellow Bastion was built in 1729; when Sarajevo was raided in 1697, Sarajevo realised that their secondary alarm system wasn’t strong enough, and built the Yellow Bastion. 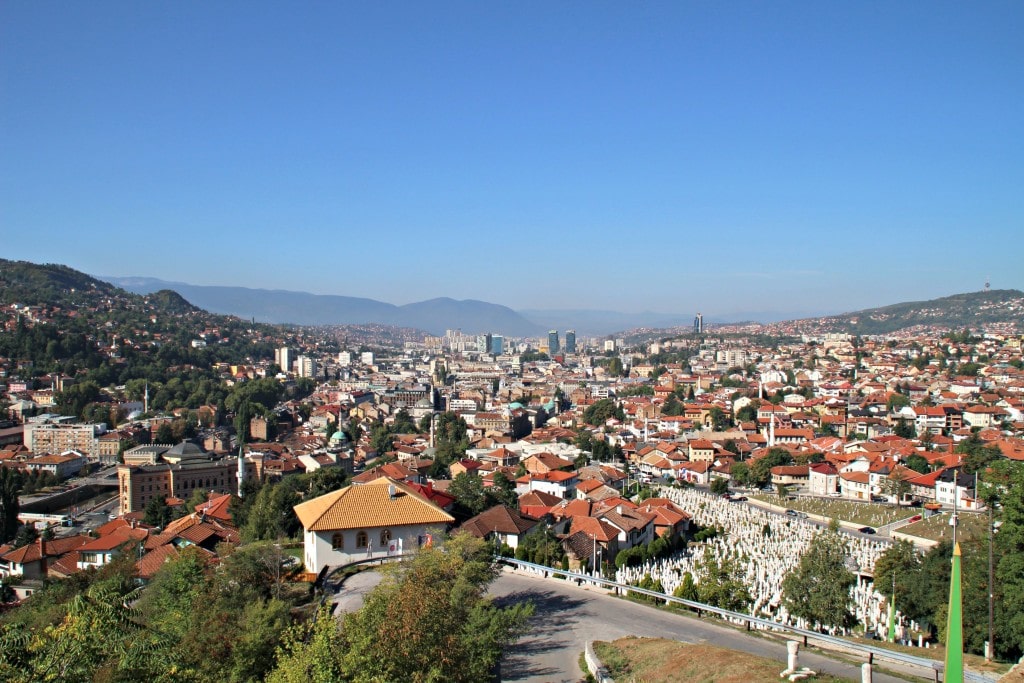 We then drove down Sniper Alley, past the Eternal Flame (put in place for those killed during the resistance of WWII), and the memorial to all of the children killed during the siege (it is an image of a mother holding her child). We then passed the State Parliament, National Museum (which has been closed for the past three years but was recently reopened), and the University of Sarajevo (which used to serve as military barracks). 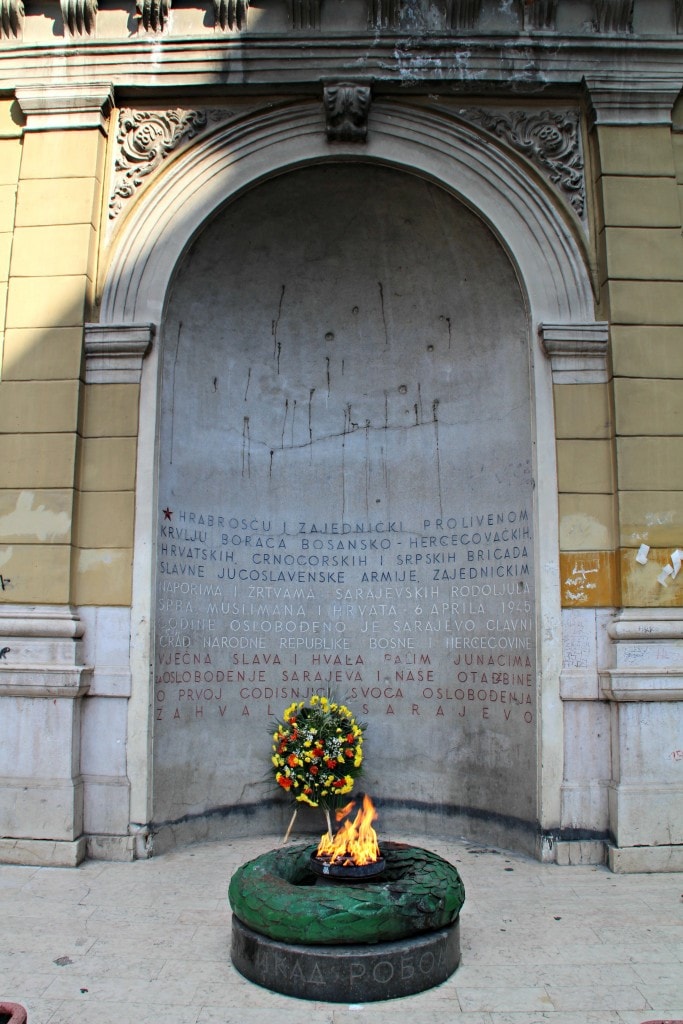 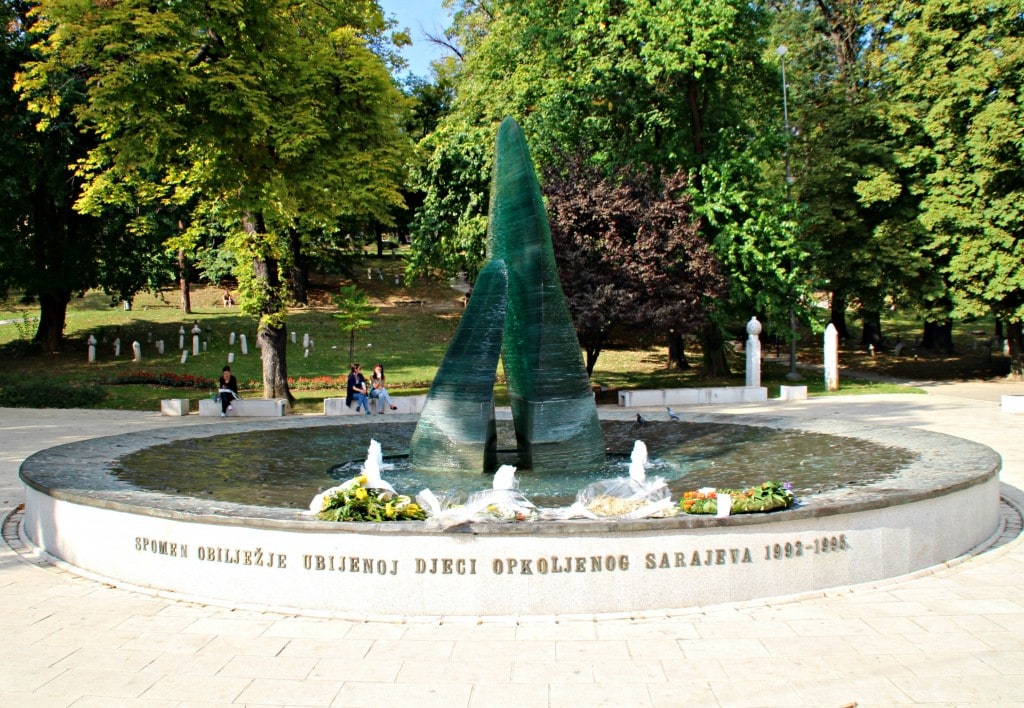 Later on in the day, after experiencing the Tunnel and before exploring the abandoned hotel, we went to the ski ramps of the 1984 Winter Games on Mt. Igman. Before Yugoslavia, no communist state had ever hosted the Winter Olympics. Even though the podium was partially destroyed during the war, it has been rebuilt. We got to stand on the platform where the Olympic winners received their medals! 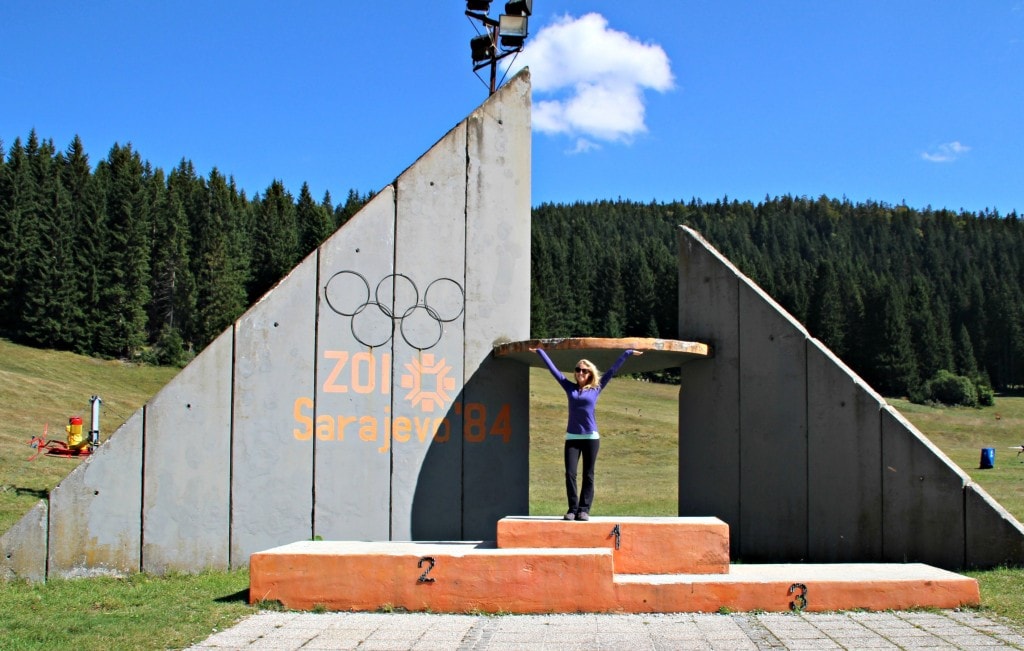 All in all, we had a fantastic tour with Ervin! It was heavy, heartbreaking, and informative. A necessary tour for anyone visiting Sarajevo.

**Special thanks to Ervin of Toorico Tours for kindly offering me a complimentary tour. As always, all opinions are my own.