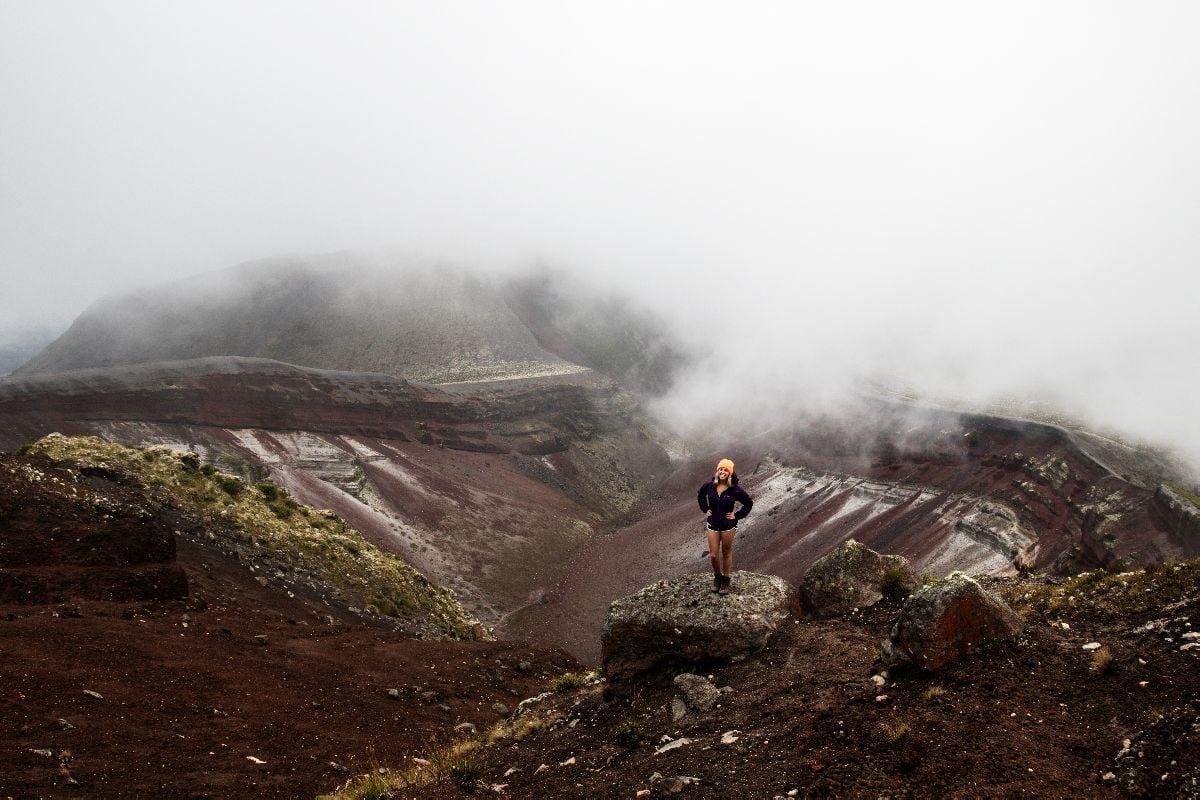 As we climbed farther and farther up Mt. Tarawera into the clouds, we weren't sure what to expect. The 30 minute drive turned into another 25 minute four wheel drive as we were bouncing around in the back seat. The air became damp and chilly, not the warm semi-sunny day we had lower down in Rotorua. After climbing 90% up this volcano, we exited our vehicle to begin our morning hike around the crater of Mt. Tarawera with Kaitiaki Adventures. 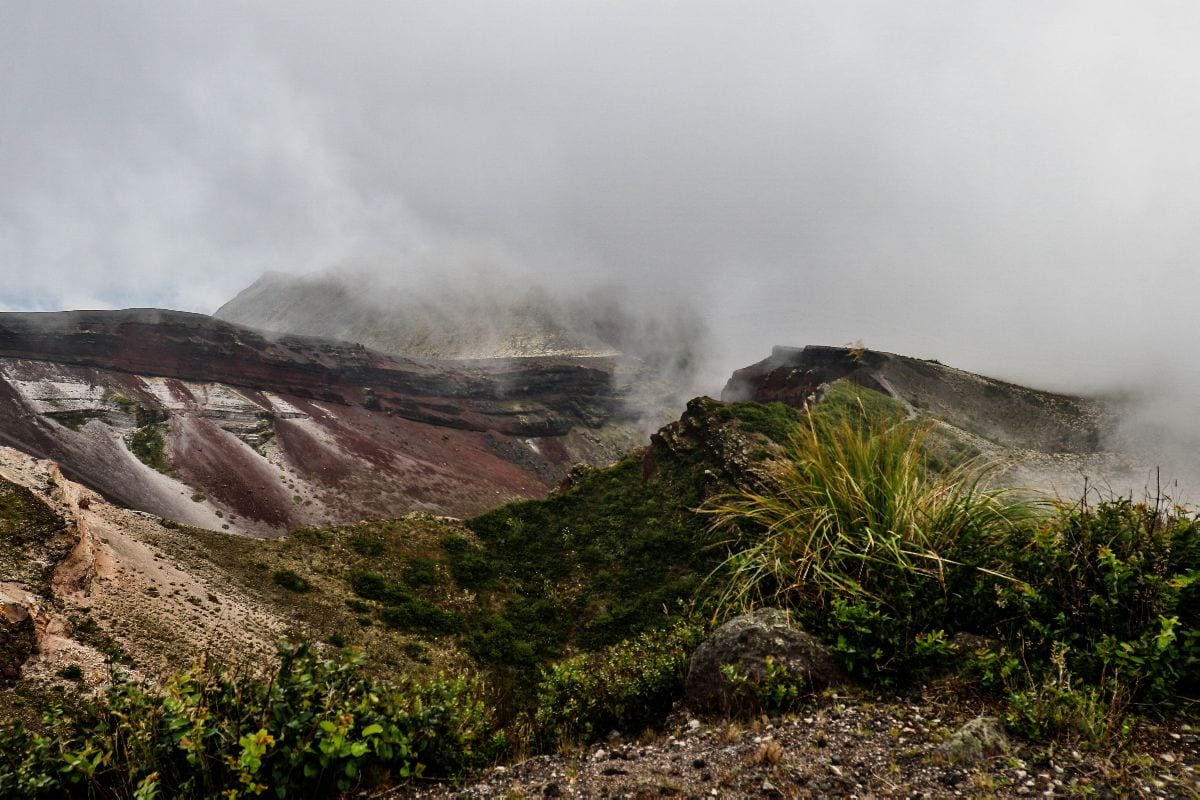 On the drive up, we drove through Kaingaroa Forest, the second largest man made forest in the world (following that of Johannesburg). After passing through this forest, where locals individually plant seeds and stems to keep it thriving, we entered natural plantation consisting of 129 years of native-to-New Zealand growth.

After the eruption of Mt. Tarawera on June 10, 1886, everything as far as the eye could see was obliterated. Violent earthquakes caused ash and lava to shoot out of Mt. Tarawera, decimating everything in sight. Believe it or not, lava shot 9km up into the sky! The eruption lasted a mere six hours, but a devastating six hours it was. Mt. Tarawera is still a mystery to seismologists. Typically a volcano has one huge eruption then multiple smaller, not-so-detrimental eruptions, but it was the reverse for Mt. Tarawera – there were four minor eruptions, consisting of oozing lava flow, before the big fifth eruption that put parts of New Zealand under 30 meters of ash. 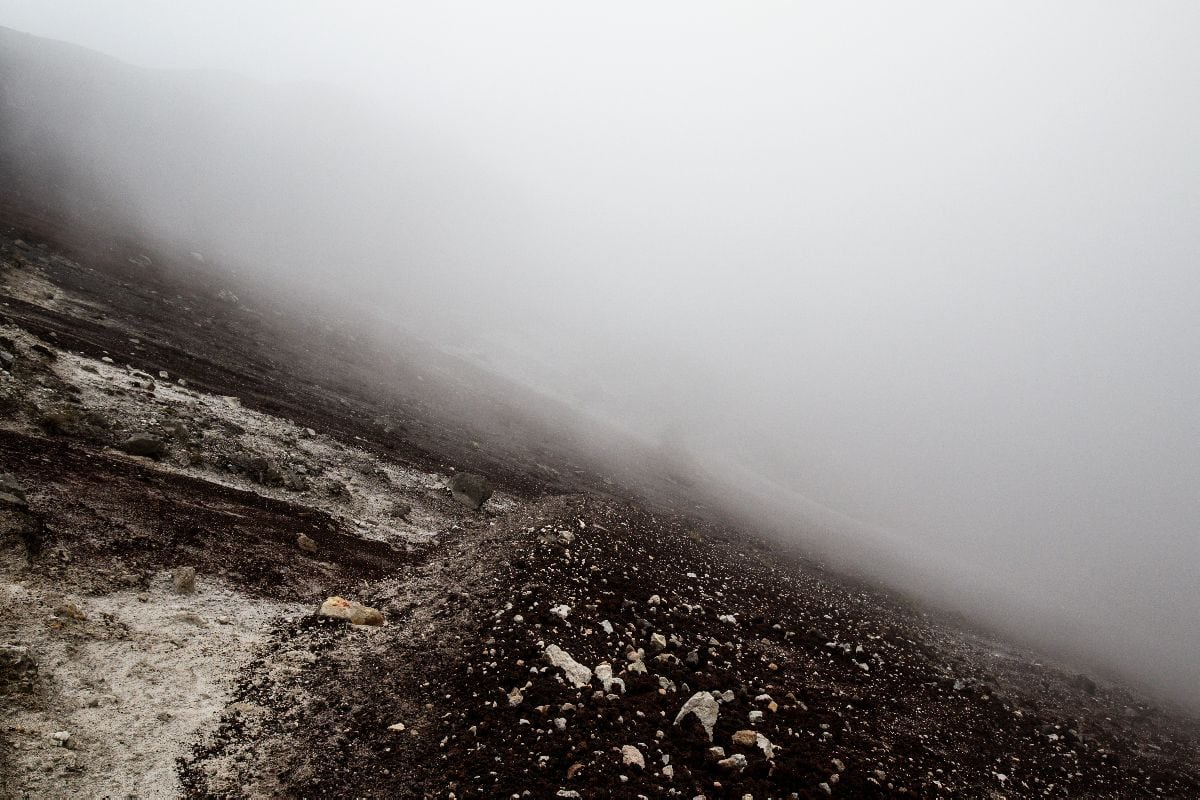 It is important to note that Mt. Tarawera and the surrounding lakes are tribal land. Kaitiaki Adventures has been in business for eighteen years, and they are the only company that have been in contact with the Maori people to discuss the use of their land for tourism purposes. It is only accurate that Kaitiaki means guardian or caretaker – a guardian of the lakes and forests, and a caretaker of us. 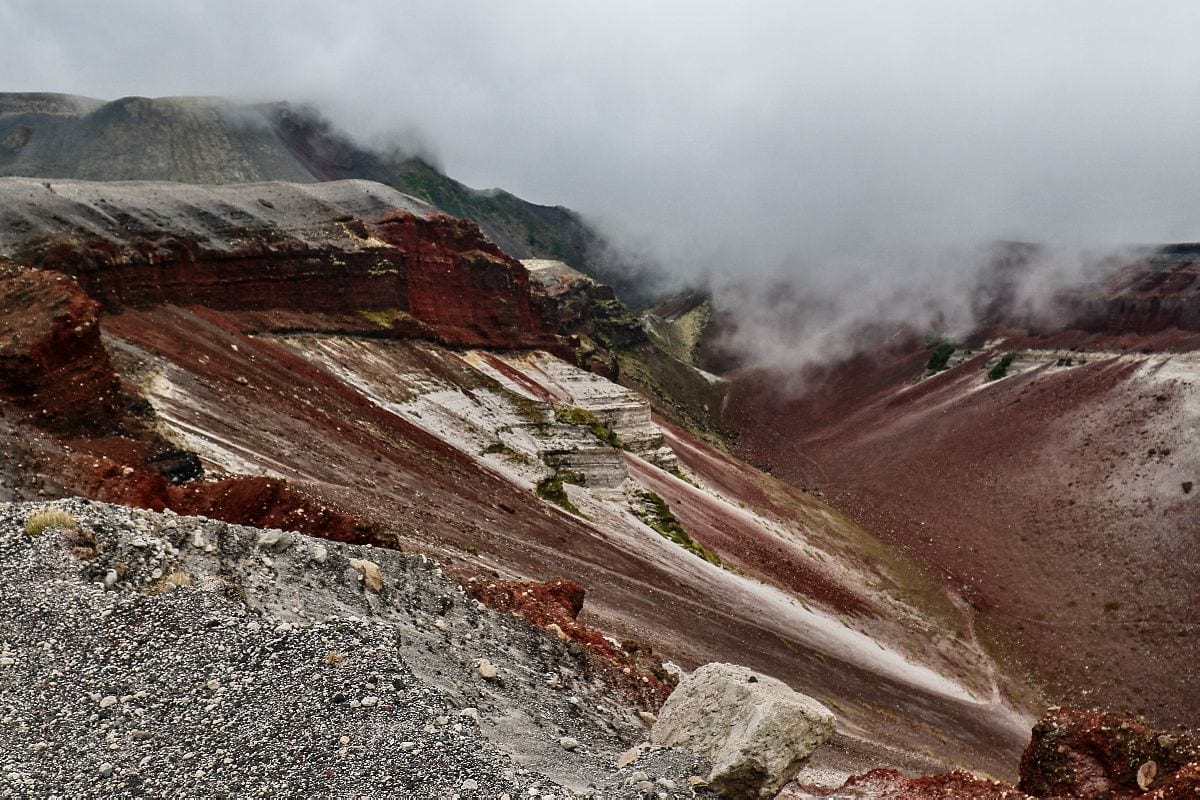 At first I was a bit concerned about the cloud coverage; typically people climb a volcano or a mountain for a beautiful view. We weren't getting any views that morning! Luckily, our guides Kane and Geni encouraged us to continue despite the weather, and it was sure worth it! They were also as gracious as could be from two standpoints – 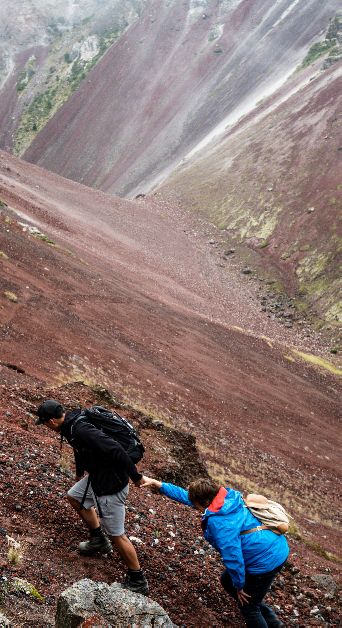 When we reached the first lookout of the volcanic crater, I knew we were in for a unique tour. Why? Because they pointed to the path shown below, and told us we were ultimately going to go down that path and into the crater itself. I thought they were joking. Let me just say, that path looked both narrow and far too vertical! Can you spot it? 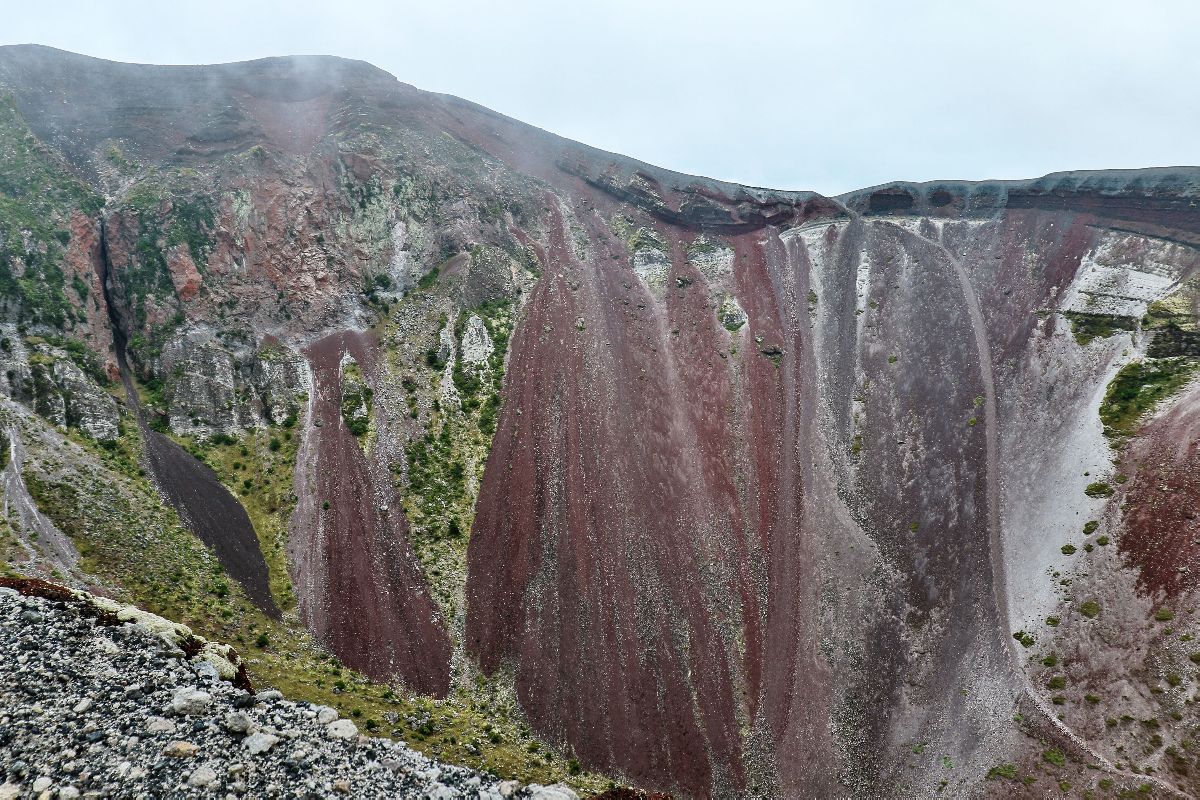 We continued our way around the crater, with a brief rock scrambled up, in order to reach the highest point of Mt. Tarawera at 1111 meters above sea level. Usually you can see multiple lakes of significance to the Maori and numerous beautiful vistas, but, unfortunately, we only saw clouds with little glimpses of what could be. 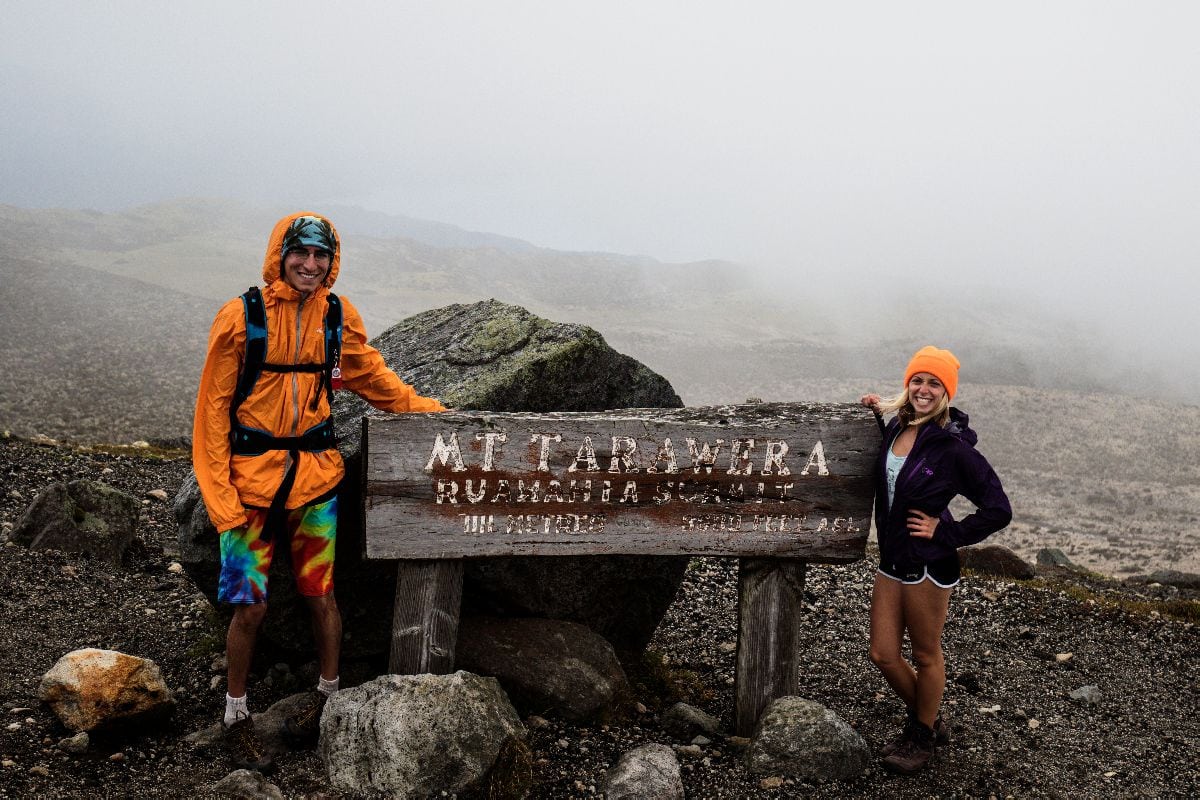 It says a lot about the volcano, however, when I say that it's 100% still worth it to join Kaitiaki on their volcano climb even if it's cloudy! Painted in beautiful reds and greens, with clouds swirling by, this volcanic crater is not worth missing. 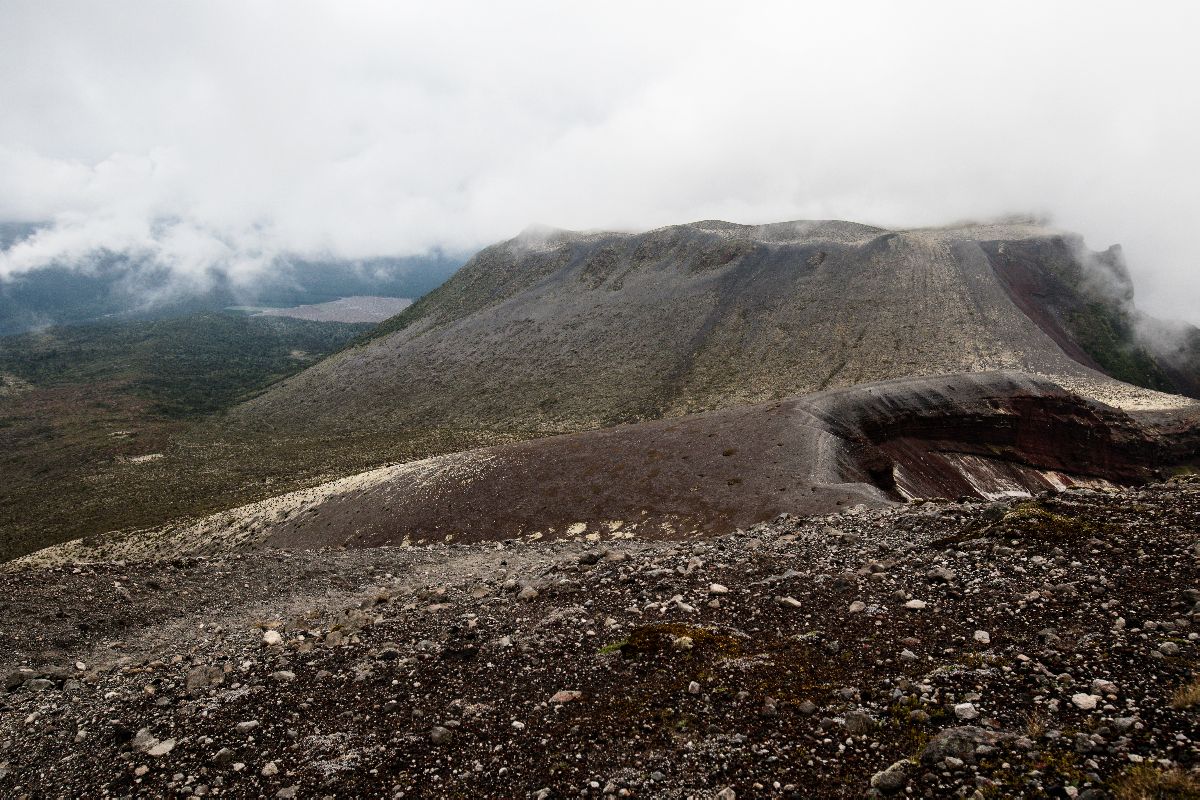 After circling the rim of the caldera, we went inside! Down that incredibly steep path, we made it into the heart of the volcanic crater. Rocks that looked tiny from above seemed huge. Volcanic walls that had been covered in clouds were now clear. We felt minuscule in comparison to this giant caldera. 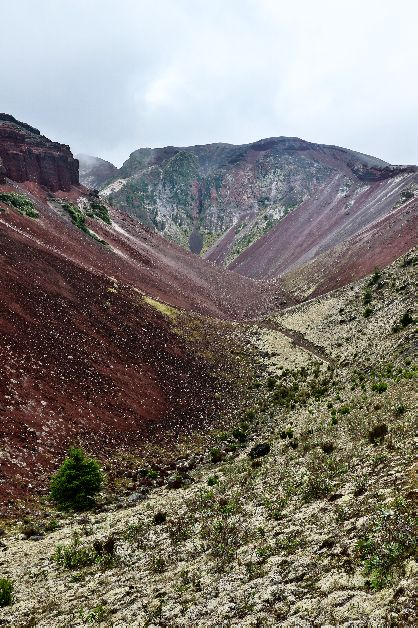 With one more steep climb out of the caldera, we had successfully completed our Mt. Tarawera hike with Kaitiaki Adventures. Worth it? Absolutely! This unique volcano is not to be missed. Maybe you'll be lucky and even have the beautiful vistas juxtaposed beside the incredible volcanic crater!

**Special thanks to Air New Zealand and Kaitiaki Adventures for sponsoring our journey. As always, all opinions are my own. Photographs taken by David M Gallo Photography. 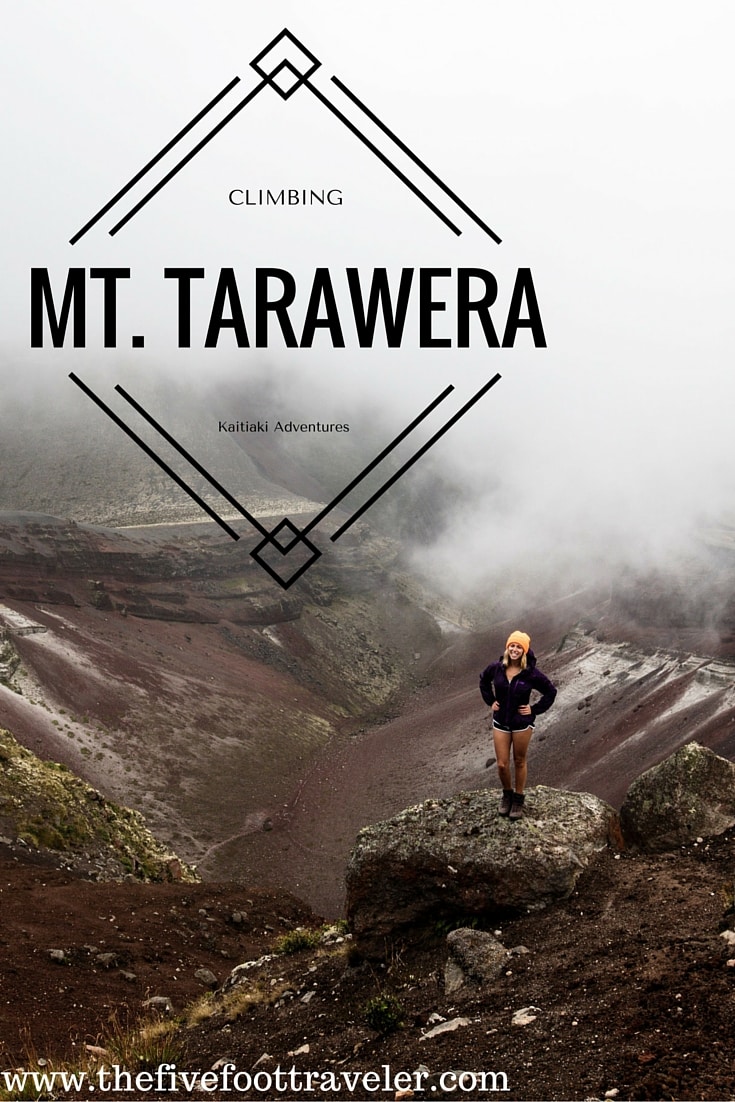