If you’re not afraid of the dark or small spaces, you must head to the Cango Caves (Klein Karoo) and sign up for their Adventure Tour! The tour includes the first two main chambers (a bit touristy), but then continues to four “adventure chambers,” and 3500 steps later you will experience: the Lumbago Walk, the Tunnel of Love, the Devil’s Chimney (67 cm/26.4 in wide), and the Leopard Box (which is only accessible when sliding on your belly, as the highest point is only 27.94 cm/11 in).

The Cango Caves have been known to man since the Early Stone Age and are South Africa’s oldest tourist attraction. The Bushman inhabited the caves for quite some time and left it as recently as 200 years ago, however, they only inhabited the entrance chambers because, supposedly, the dark parts of the caves are where the ancestral spirits are resting. Tools, knives, pottery, and paintings are said to be dated 10,000-12,000 years old.

The first chamber houses the biggest stalactite in the world (7-9 meters in height), and is 750,000 years old. The second chamber houses the “completed column,” which is a combination of a stalactite and stalagmite. The highlight of the Cango Caves is without a doubt the “Petrifying Weeping Willow Tree,” as it’s 1.5 MILLION years old! 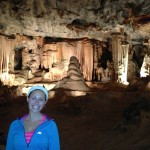 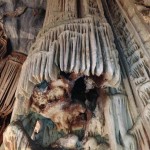 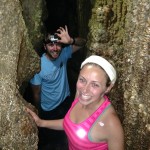 The adventure aspect of the tour was an absolute blast, as we enjoyed spelunking in the tiny crevices. The Adventure Tour is most definitely not for anyone who considers themselves overweight or claustrophobic. Know what you’re getting yourself into before you go – in the lobby there are two scale models that you can climb through. Now picture yourself in a dark tunnel of that (minuscule) size…would you be able to handle it? If you think so, it is important to note that it is slippery and steep at times, with low ceilings. You will find yourself scurrying on your stomach under stalagmites and sliding head first through tiny spaces. It’s an experience you wouldn’t expect to encounter in South Africa – don’t pass it up if you have the time!