Who doesn’t enjoy sneaking into something that’s off limits?

“Do not cross.” You cross anyway.

“Do not climb.” You climb it anyway.

“Do not enter.” Naturally, you try to enter. 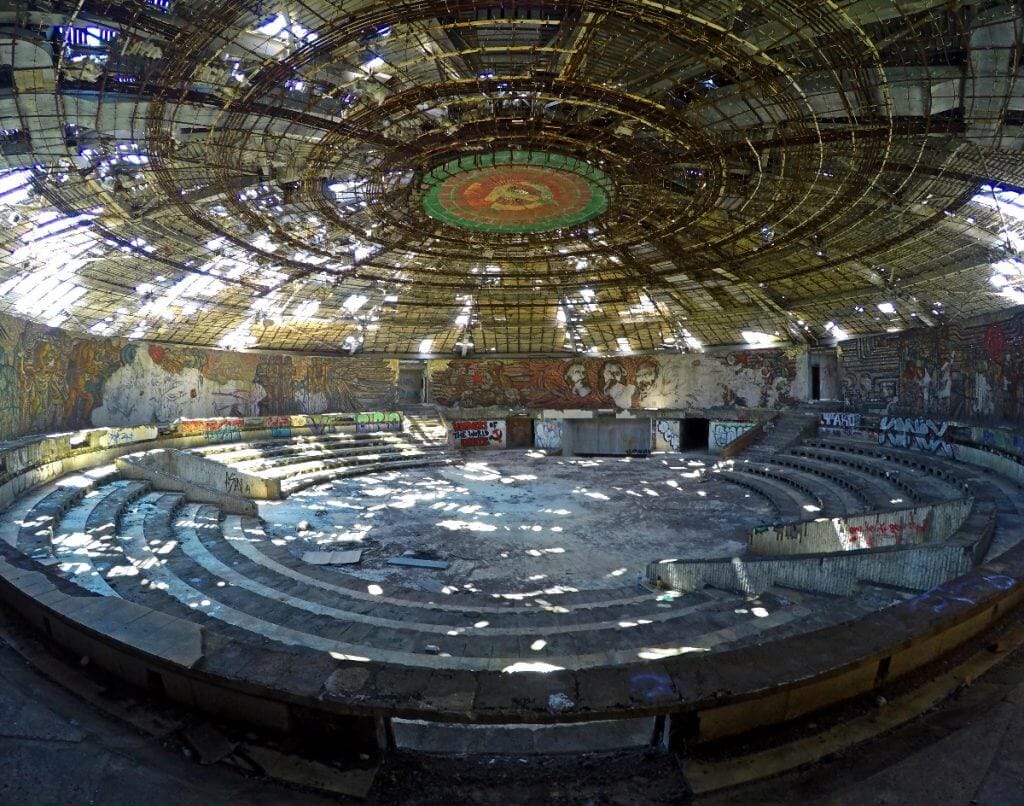 When we found out that there was an abandoned “UFO” in Bulgaria, we just had to go check it out for ourselves. The building was initially built to serve as a secret spot for socialist meetings, and is one of the last remaining symbols of communism in Bulgaria. Yet, somehow, few have heard of Buzludzha – it definitely doesn’t show up in Lonely Planet, Rough Guides, Frommers, or Rick Steves. I cannot understand why not. For this reason, Buzludzha piqued my curiosity that much more. 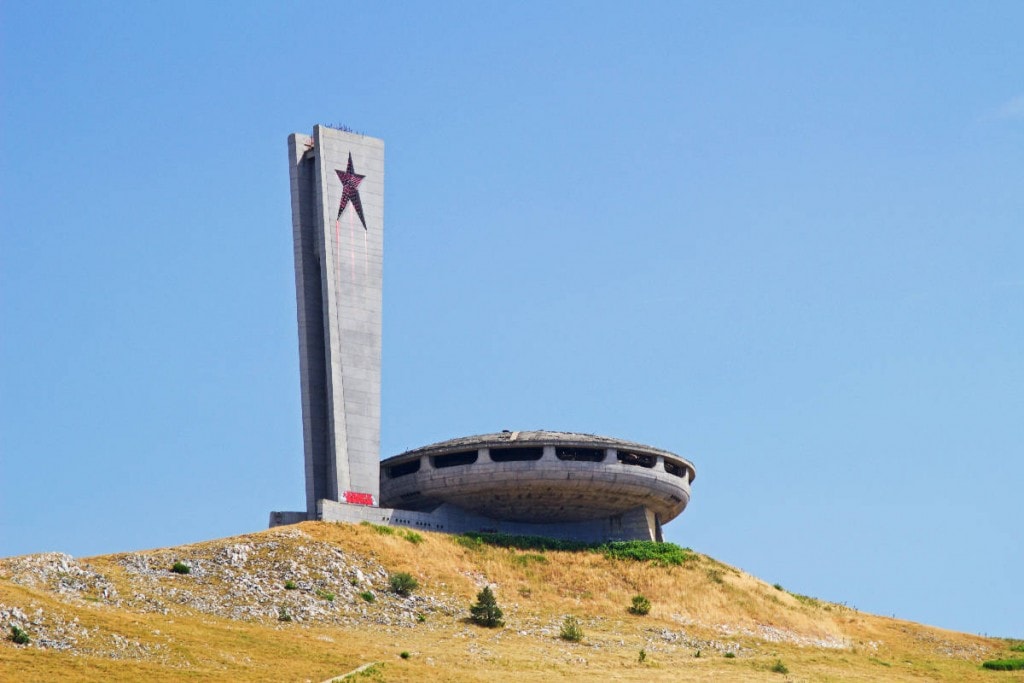 While staying at Hostel Mostel Veliko Tarnovo, we rented a car to go explore this important communist symbol. 5 FT Tip: Try to visit Buzludzha with Hostel Mostel Veliko Tarnovo. They arrange an amazing off-roading, all-day adventure to the UFO. It was, unfortunately, completely booked the day that we arrived, but people that went on the tour said that it was phenomenal.

We, on the other hand, were given a great solution by the Hostel: rent a car for the day and go ourselves. So, we found two other adventurers eager to explore, and we split the cost. We set out with a car and a GPS while concurrently trying to tackle Cyrillic street signs. After about an hour of driving, we came upon the first statue on the grounds of Buzludzha: two torches symbolizing Russia and Bulgaria’s alliance. 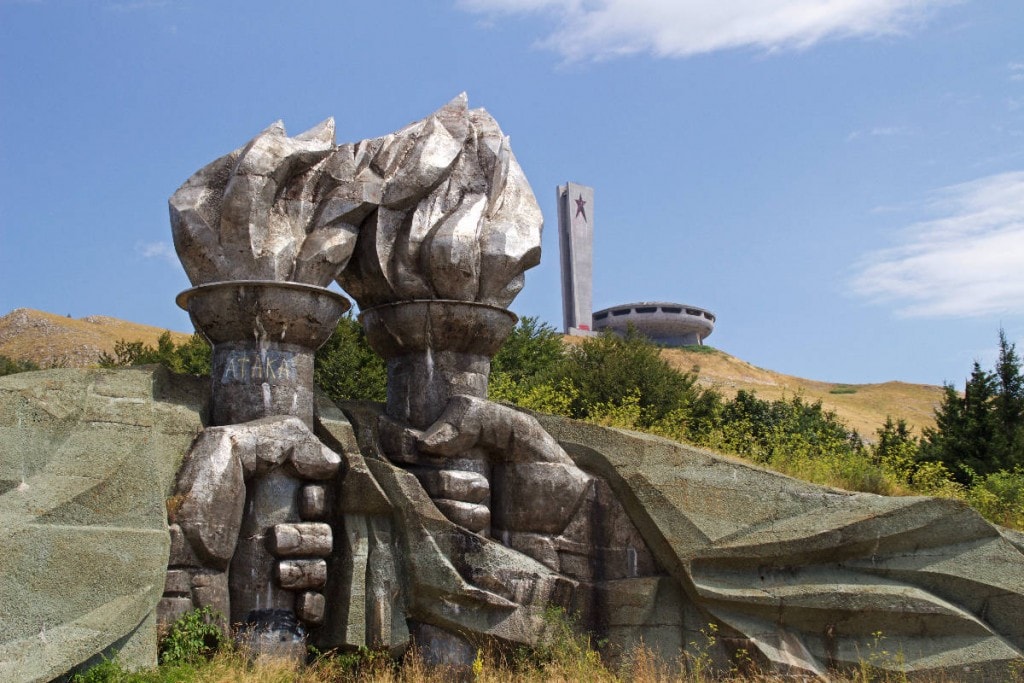 We continued on, and were ultimately able to drive directly up to the UFO.

Never Forget Your Past

With “Never Forget Your Past” etched above the original entrance to the monument, an eerie feeling ran through me: What used to happen here? This entrance had been sealed since the collapse of Communism in Bulgaria in 1989. 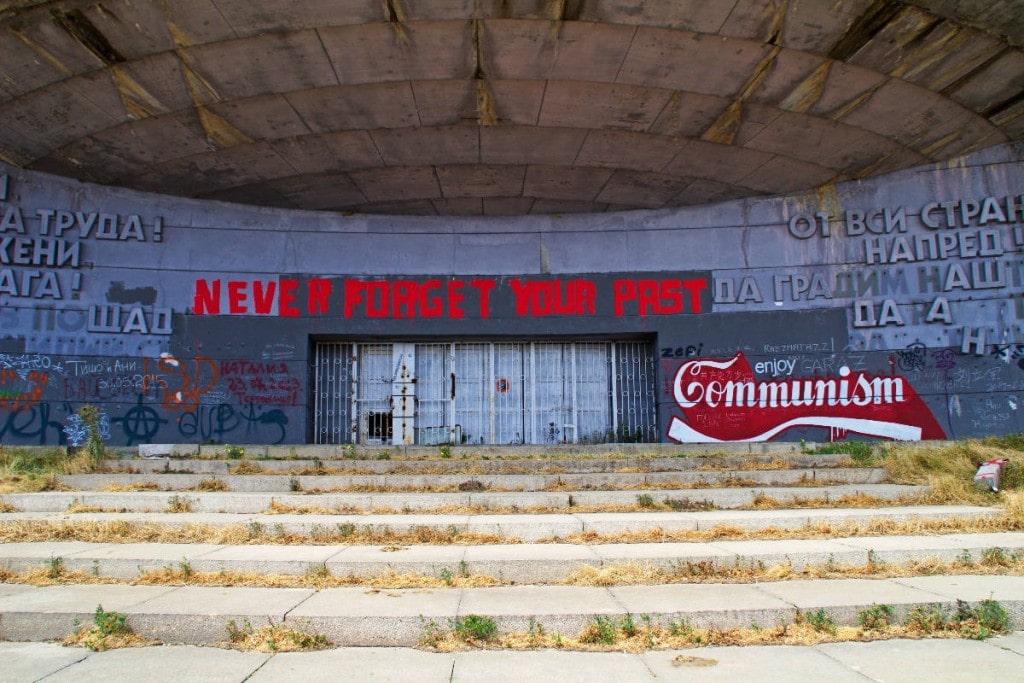 How do you get inside?

If looking at the monument head on, circle around to the right, and you will see a pile of loose rocks leading to an opening in the concrete, about the size of my torso. Remember people, I’m only five feet tall! Needless to say, it was a very small hole to climb in through. 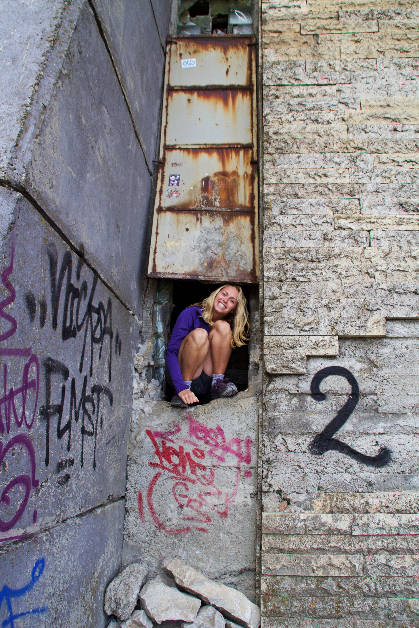 With relative ease, we scrambled up the pile and through the hole, entering onto the staircase separating the main concourse from the basement. Instantly, it became clear that the building had been abandoned for quite a bit of time. With collapsed stairs, chipped cement, and broken glass, it is an absolute necessity to wear closed-toe shoes. 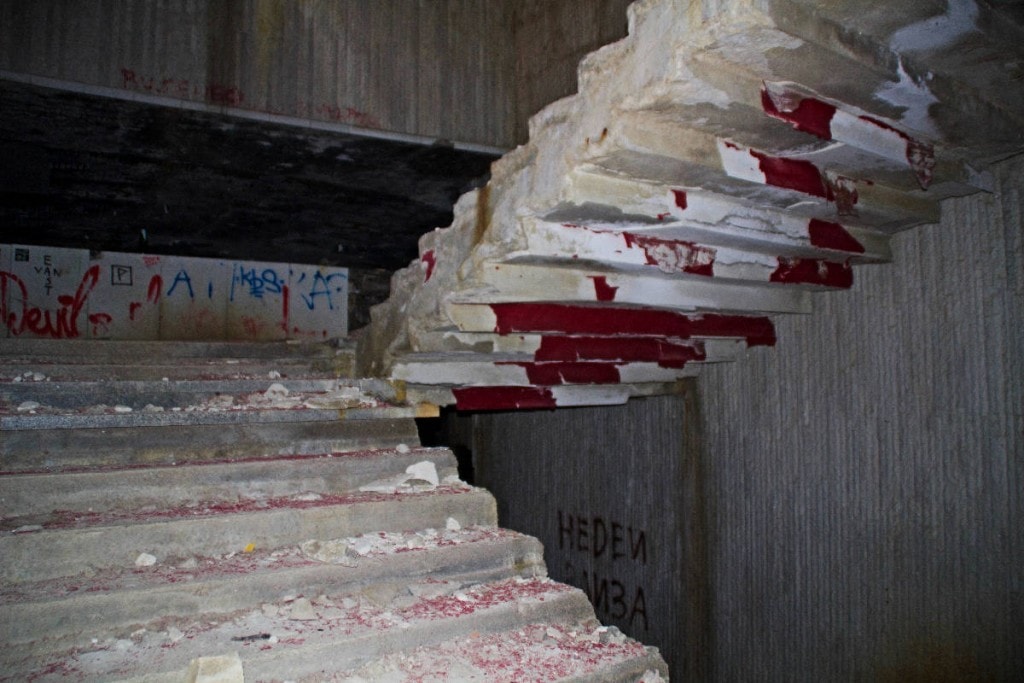 After climbing a small set of stairs, we walked into the main auditorium. Our jaws dropped when we saw it all. 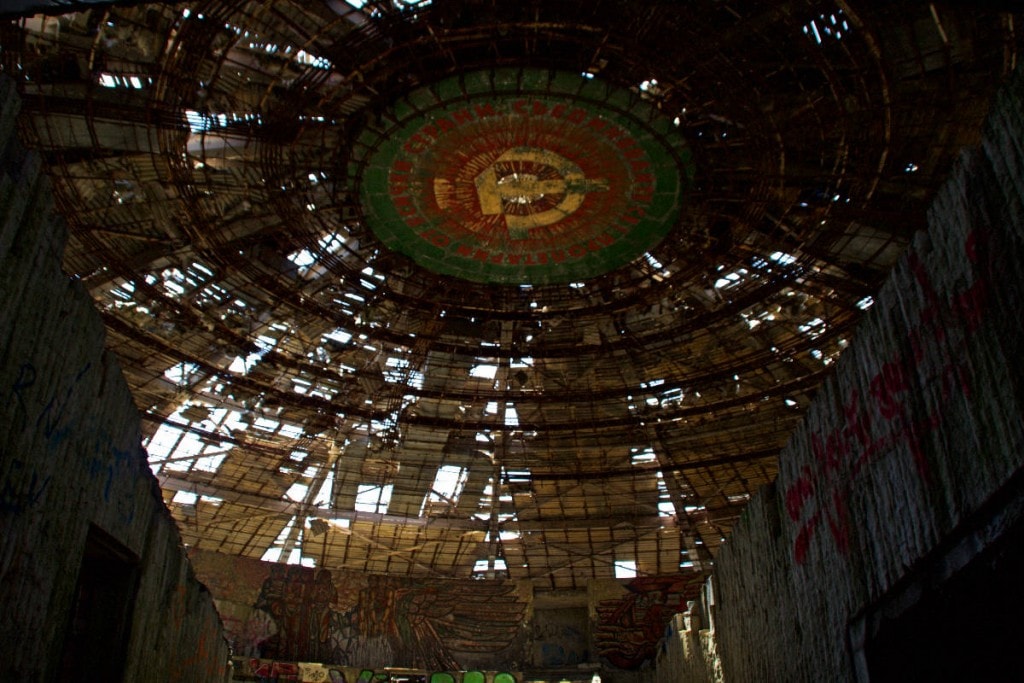 The varying degrees of preservation, and lack thereof, were astounding. The colors swirled around as the mosaic faces of the most well-known Communist leaders seemingly stared back from the walls: Marx, Engels, and Lenin. 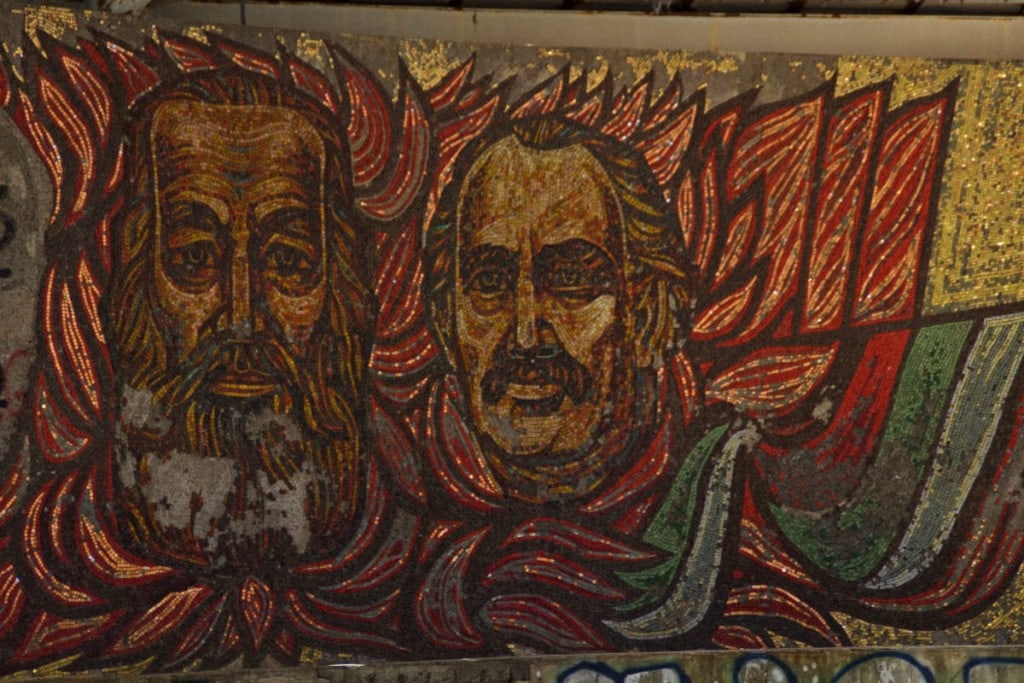 The gigantic symbol of Communism, the hammer and sickle, are prominently displayed on the ceiling. Rays of light shone down through the decrepit roof into this very interesting piece of history. With a headlamp, it is possible to explore every crack and crevice of the building and, when standing on the outer levels, the UFO offered fantastic views over Bulgaria. 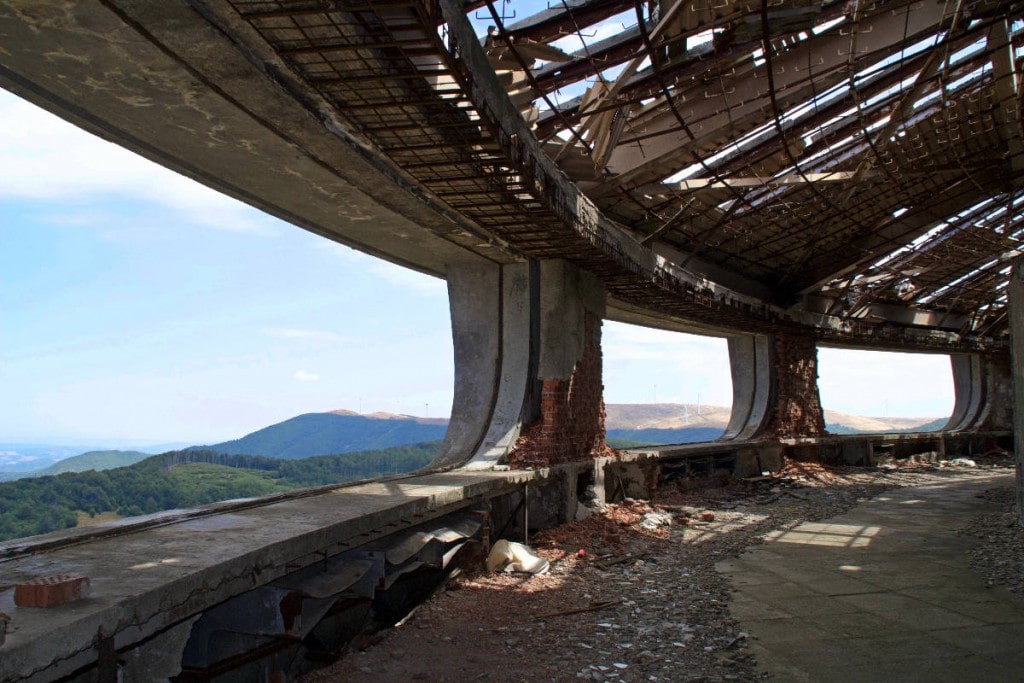 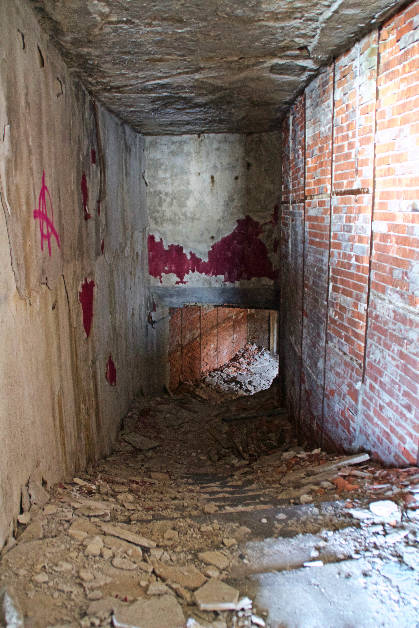 Having thoroughly explored the main level and upper areas of the building, we decided to turn on our headlamps and venture downstairs. 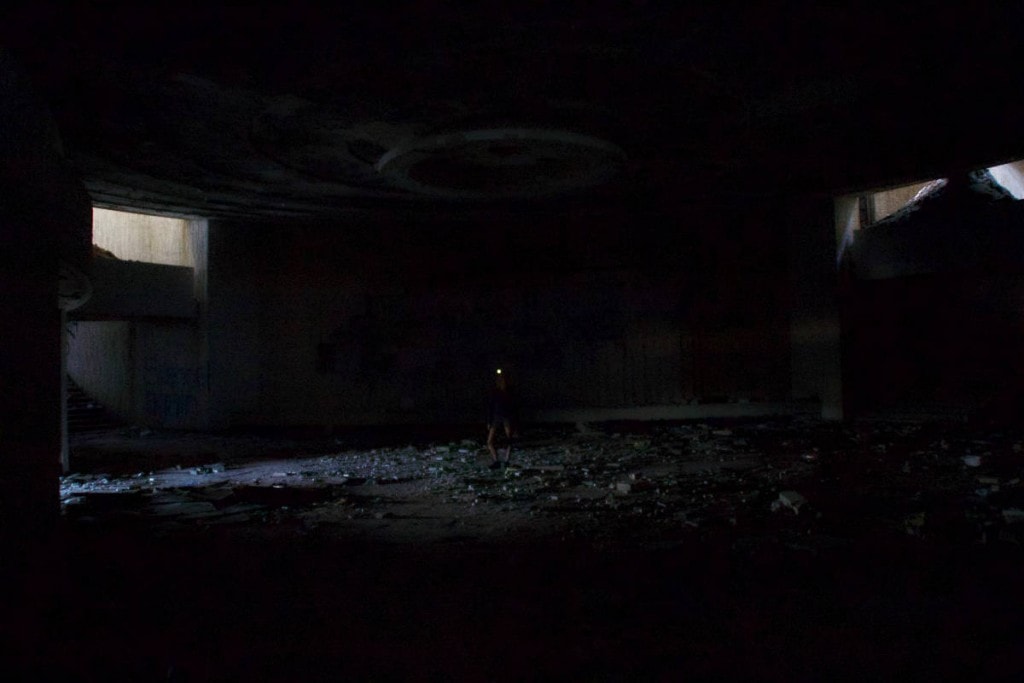 We passed the iron-sealed entrance, wandered some corridors, and avoided random holes in the floor before we found ourselves at the foot of the very dark control tower. Naturally, we had to climb it. With completely vertical rungs, in the pitch black, we climbed. And climbed. And climbed. Despite being told it was safe, trusting an abandoned structure and entirely rusted-through ladders (tetanus anyone?) may not have been the smartest idea in the world, but it was just so cool. 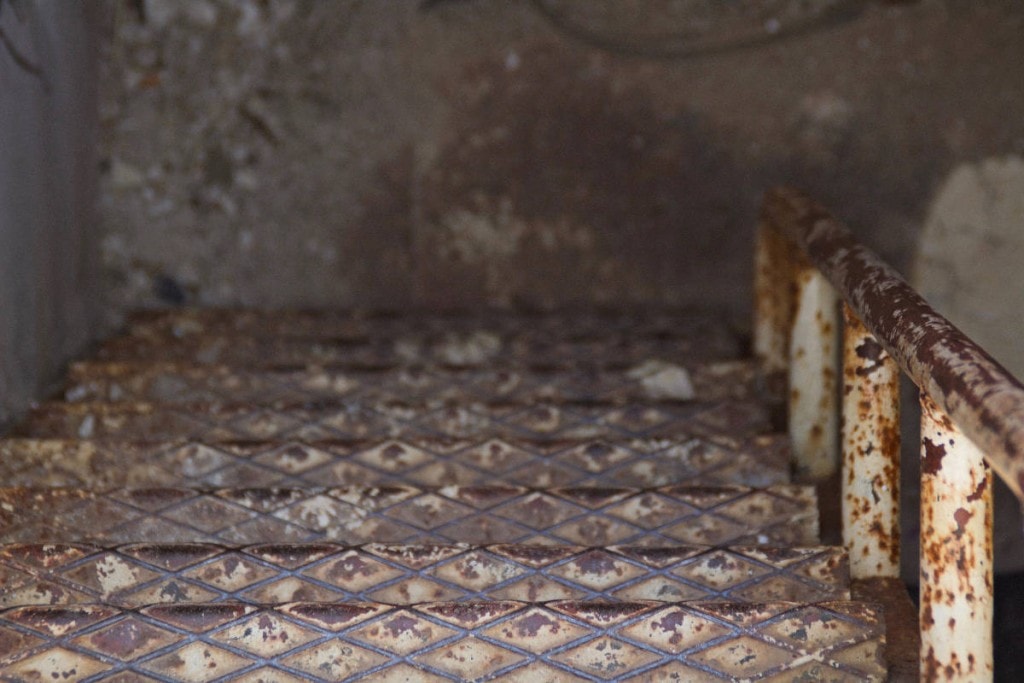 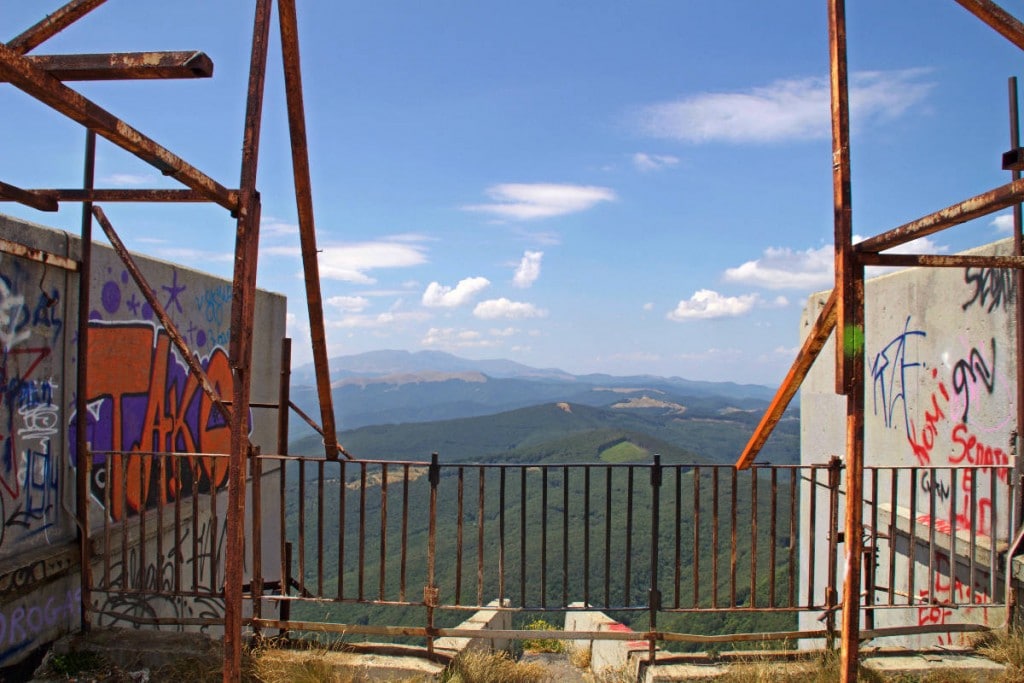 We spent about 2.5 hours exploring Buzludzha in total before starting back to Hostel Mostel Veliko Tarnovo. Along the way, we pulled over at the Shipka Memorial, located on top of Shipka Peak. We climbed over 700 steps up to get a good look at both the monument and the surrounding vistas. At the time, we didn’t know what we were looking at, just that it was a cool-looking monument on the side of the road with nice views of the UFO in the distance. 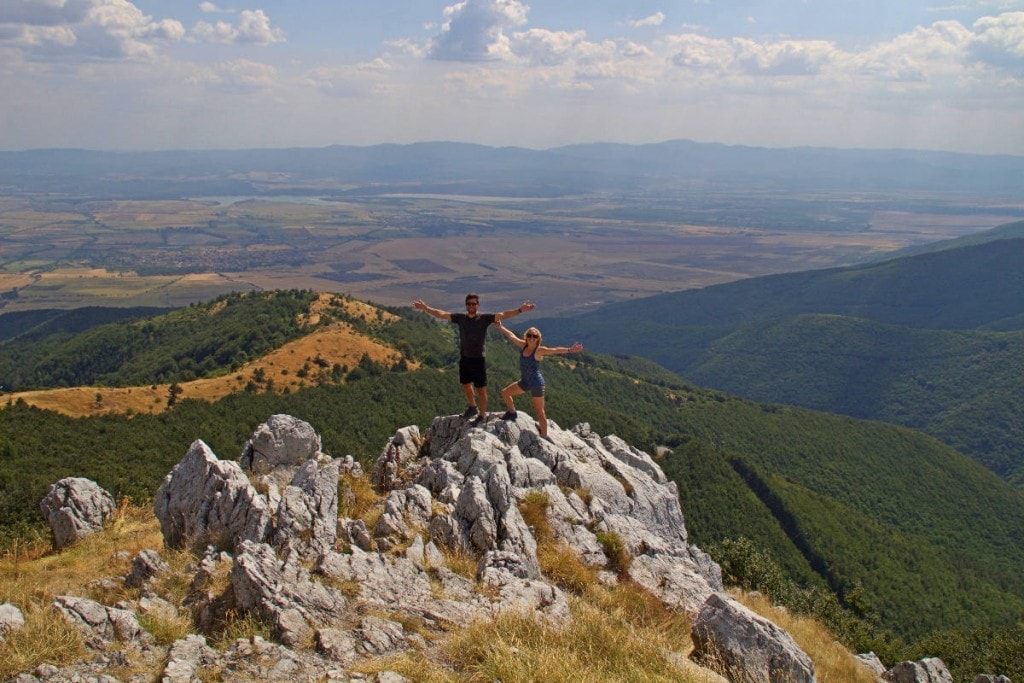 We later learned that the Shipka National Park Museum comprised of 26 monuments, reconstructed battle positions, artillery batteries, and dugouts of the defenders of the Shipka Pass during the Russo-Turkish War from 1877-1878. The outline of the largest monument, the Liberty Memorial, appears similar in looks to a Bulgaria fortress, and instantly caught our eye while driving. After our stop at Shipka, we made our way back to the hostel. 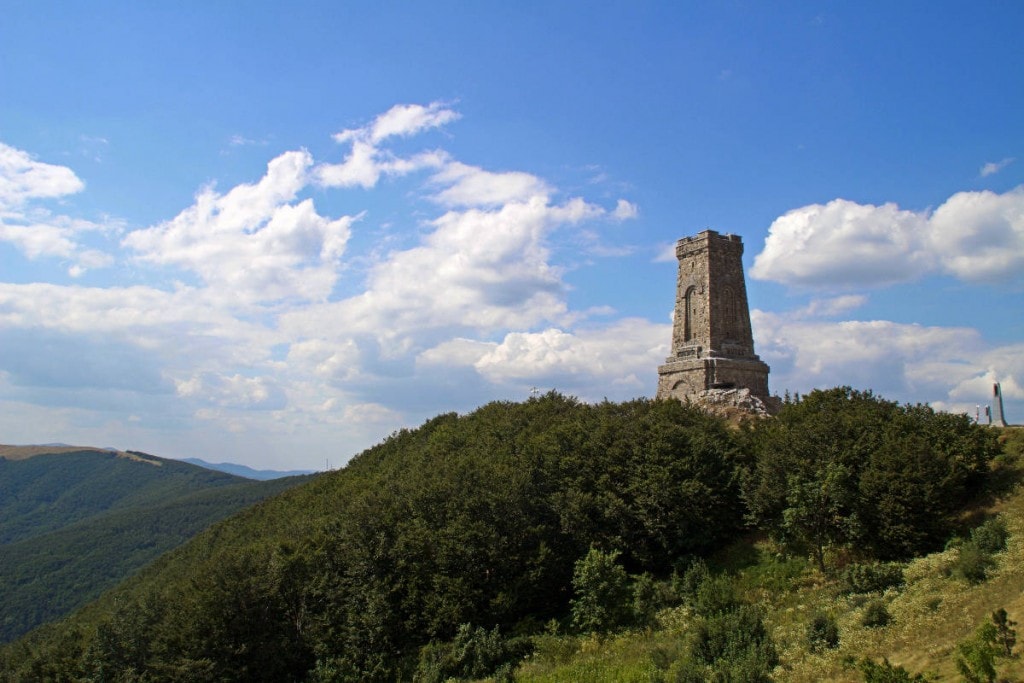 Buzludzha is, without question, one the most impressive and unique things I have seen and done in all of Europe. We met people that simply went to Bulgaria only to see the UFO. We even bring it up every few days in side conversations on just how cool it was. I could talk about Buzludzha all day but, in reality, you will only understand if you see it for yourself and learn the history behind one of Europe’s most undiscovered and under-appreciated sites. 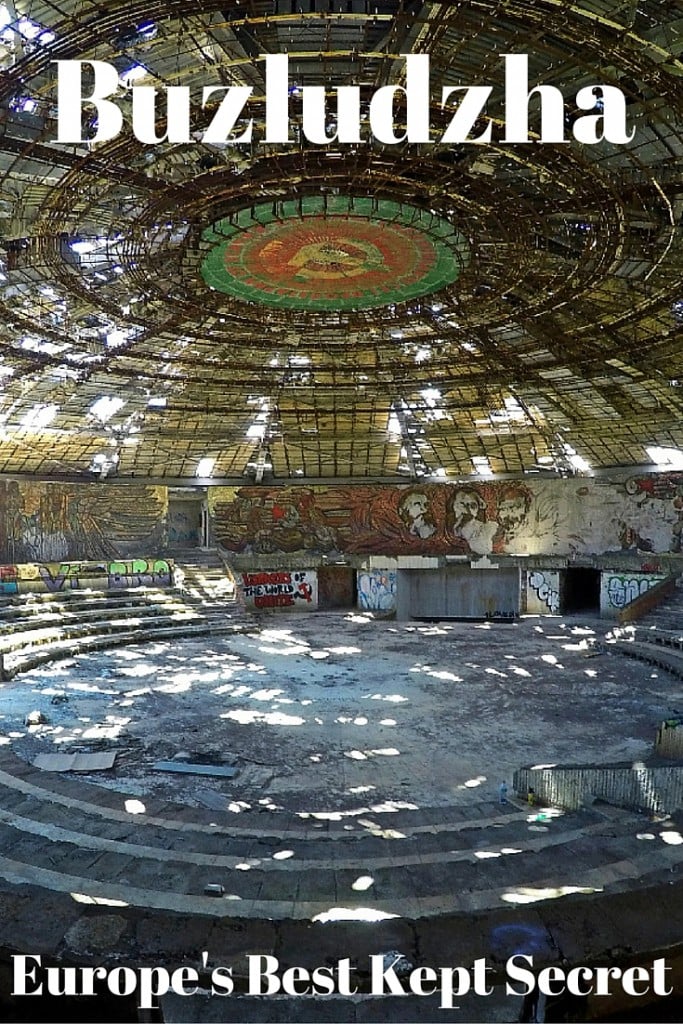