Coming to an End…

Our last morning with Birthright. After breakfast, we threw a red ball of yarn around our circle while sharing our most prominent moment from the trip. It was very emotional and it connected us both figuratively and literally. We were such a unique, likeminded group of individuals and the yarn signified that not only are we rooted together, but that our actions affect everyone else. It was really quite moving, and we partook in one last group hug. 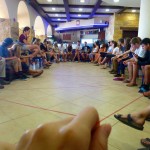 We boarded the bus, took our last look at the Sea of Galilee, and began driving to Ben Gurion airport. As we approached the airport, we tearfully sang “Leaving on a Jetplane.” I knew that our Israeli soldiers would be meeting us, so when we walked through the doors I looked all around. I saw no one. Then out of nowhere I heard them yelling and running towards us and somehow got tackled in one (final) big Taglit bear hug. Day = Made. We said our sad goodbyes to the group. It was weird to be at the airport with luggage and not boarding a plane. David and I had to make our way to Eilat somehow, and luckily we were able to get on a train with our Israeli friends who guided us in the right direction. 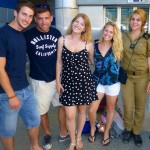 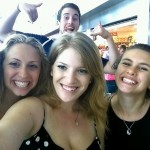 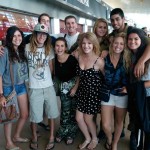 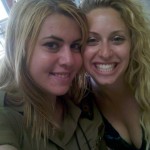 Unfortunately, by the time we made it to the bus station, we had to wait two hours for our bus to Eilat. David and I wandered around, reflecting on the incredible journey that we’d had thus far. For some reason, we were some of the only non-military people on the bus, which was interesting. If I were anywhere else in the world, I’d be uncomfortable being surrounded by so many guns in such a close vicinity in a country where I didn’t speak the language. That’s not what we are accustomed to in the US but, in Israel, it put me at ease.

We finally got on the bus for our three-hour journey South. It was smooth as could be. During a fifteen minute rest stop this old Israeli lady asked if she could practice her English with me. She told me about how her whole family had been in Israel for as long as they knew. She wanted to tell me her story and explained that when she was a teenager the South was just a land of dirt, and so she mapped out what she wanted her house to look like, laid it in the sand, and put rocks on the corners so that it wouldn’t blow away. She then built that house on the same spot of land and has been there ever since. A pretty touching story indeed. At last, we arrived in Eilat at 23:00 and were thrilled that we were actually able to find our hostel.