Astonishing Aswan to Abu Simbel Tour [Everything You Need To Know]

Arguably the best of the Egyptian monuments, an Abu Simbel tour is an absolute must. If you’re looking for things to do in Aswan, and ready for an adventure, then Abu Simbel is for you. This ancient temple complex dedicated to Ramses II and Queen Nefertari was originally cut into a rock cliff and found buried in the sand, but was actually relocated due to the flooding of the Nile. Continue reading to find out how they pulled off this miracle… 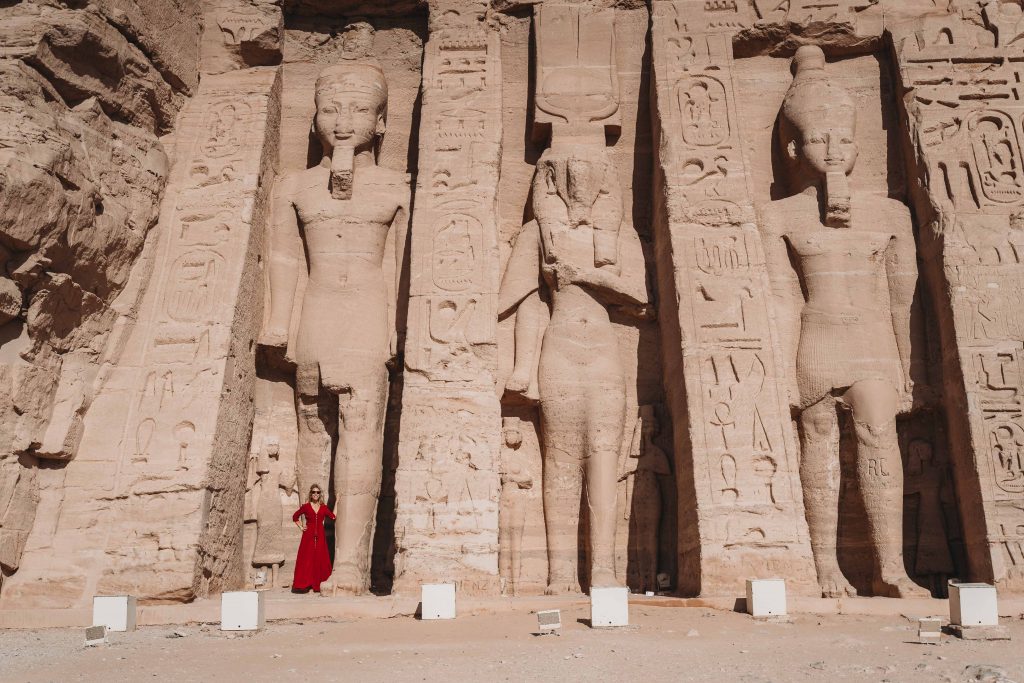 If this doesn't inspire you to go on an Abu Simbel tour, I'm not sure what will!

*All photos taken in this article by David Gallo (my incredible brother). You can view his stunning portfolio here!“

How to Get to Abu Simbel

Despite being out of the way, there are many ways to reach Abu Simbel. You could…

We personally decided to do our Aswan day trip to Abu Simbel via private tour because we wanted the flexibility to stay as long as we’d like, while knowing that we would be comfortable for the long ride over. After much research, we decided to hire a car and driver with Aswan Individual; they had phenomenal reviews online, very reasonable prices, and incredibly prompt communication. From the owners to the guides and drivers, everyone is incredibly friendly and well-educated. They pride themselves on having new vehicles with air conditioning, will not bring you to any shops where they earn a commission, and will acquire all of the necessary licenses needed for you to cross to Abu Simbel. 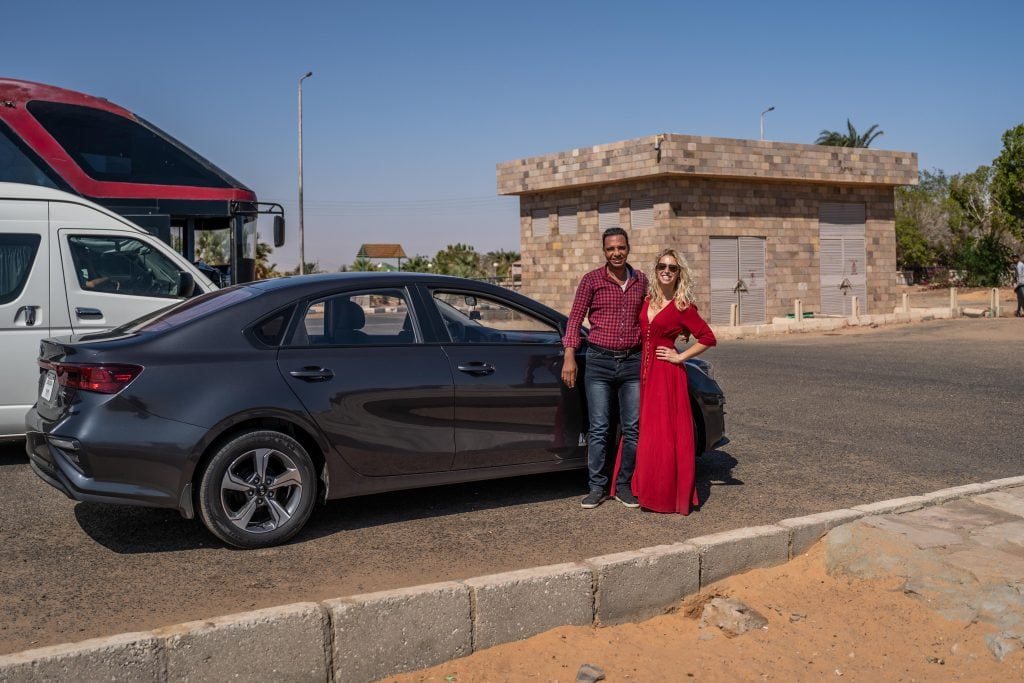 An Aswan to Abu Simbel tour is easier to arrange than you'd think!

I had the honor of meeting Waleed, the owner, before our Abu Simbel tour, and he was so incredibly kind, helpful, and an absolute joy. Whenever possible, I love being able to support local businesses and – after meeting Waleed and then continuing onto Abu Simbel – I can honestly say that I am thrilled to recommend Aswan Individual for anyone visiting not only Abu Simbel, but anywhere in Upper Egypt (Luxor, Kom Ombo, Edfu, Esna, etc.).

The drive takes three hours, and makes a stop for restrooms at about the halfway mark. Our driver from Aswan Individual welcomed us when we entered the town of Abu Simbel, dropped us off at the entrance, and picked us up when we were finished. You will have the opportunity to discuss times based on your own wants/needs because, of course, this is a personal preference.

How much does Abu Simbel Cost?

All prices are listed in Egyptian Pounds. At the time of writing, 1 USD is about 16 EGP. Abu Simbel costs 240 EGP (~$15 USD) to enter, and an additional 300 EGP (~$19 USD) if you want to take photos inside the temple with a camera. Photography passes are only required if you want to use a camera inside, as it is free if you use a cell phone. Then, at the ticket office, we somehow got charged an additional 30 EGP (~$2 USD) for “guides and taxes,” even though we didn’t have a guide, so that was unclear to us. For two people visiting Abu Simbel with one photography pass, it cost us a total of 810 EGP (~$50 USD).

We were picked up by Aswan Individual at our guesthouse in Aswan at 4:30am and arrived in Abu Simbel at 7:30am. Most people tend to arrive at this time, as the roads have very strict guidelines as to when you can drive on them (at the time of writing, the road from Aswan to Abu Simbel was open from 4:30am to 3pm). While it is quite busy in the morning, you do avoid the midday heat, which is always a plus. If you’re patient though, there are certainly some areas where you will find yourself alone with the colossal statues. 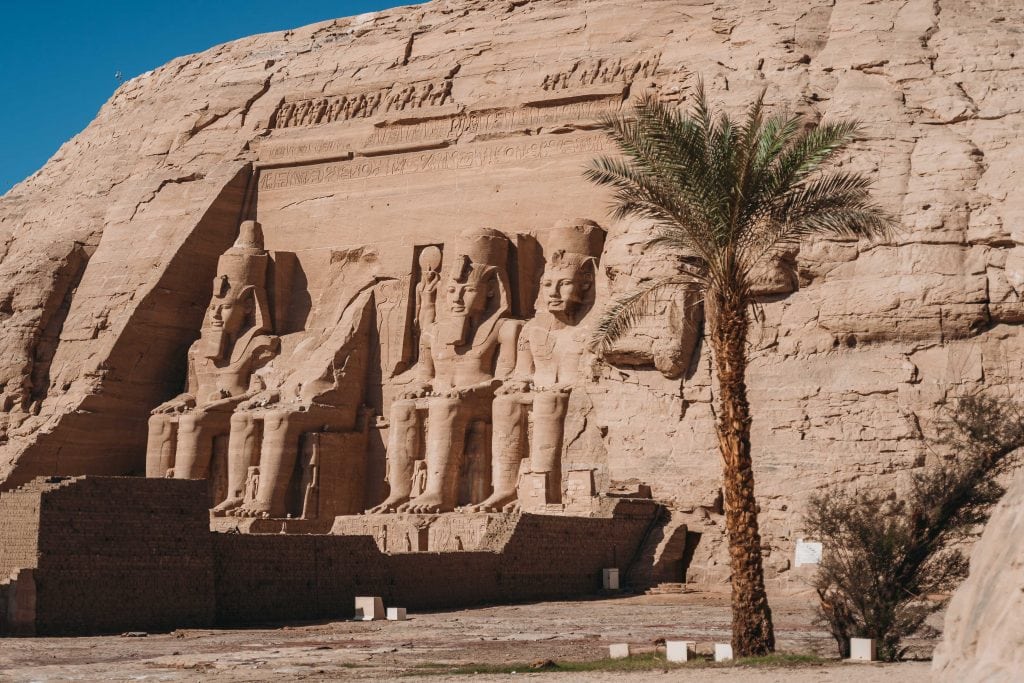 What You Will Learn On Your Abu Simbel Tour 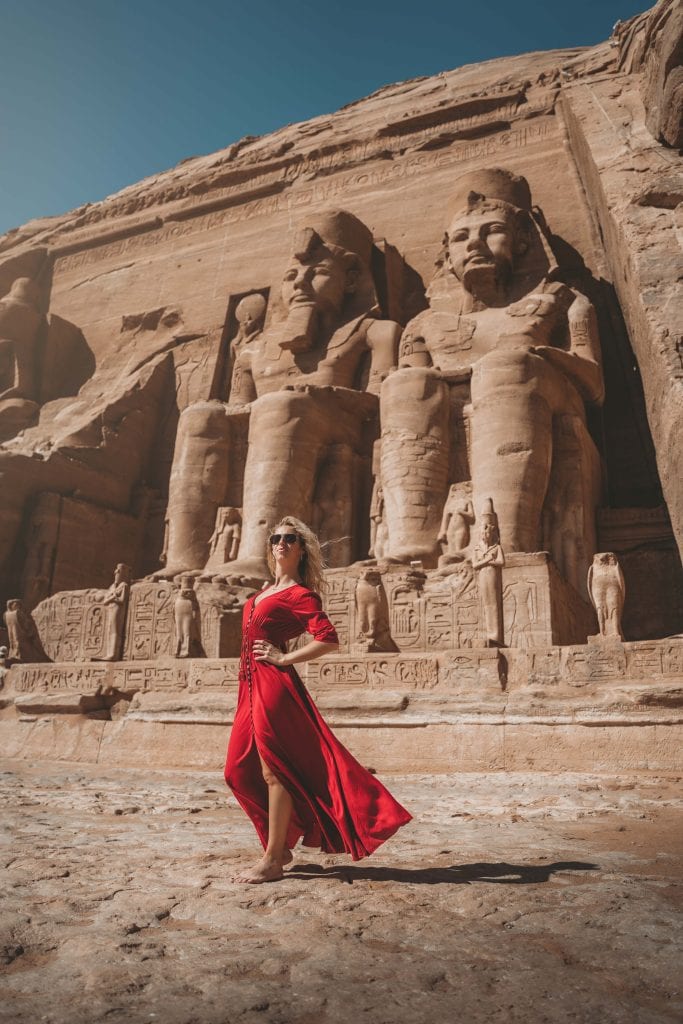 Blown away by the size of the statues at Abu Simbel!

Relocation aside, the entire Abu Simbel Complex took about 20 years to complete, but no one knows the exact dates of construction — some say between 1279-1213 BC and others say between 1264 and 1244 BC.

On our Abu Simbel tour, we learned of the two temples that comprise the Abu Simbel Complex: The Great Temple for Ramses II and the Small Temple for Queen Nefertari.

The Great Temple was dedicated to Ramses II and is 98 feet (30 meters) high by 115 feet (35 meters) wide. It is characterized by the four seated colossal statues of Ramses II. If you take a closer look, you will see smaller (yet still massive) statues of other family members and Egyptian gods. The details are simply incredible. And if that wasn’t enough, take a step inside to find eight standing colossal statues of Ramses II… I promise you, you’ll feel small. 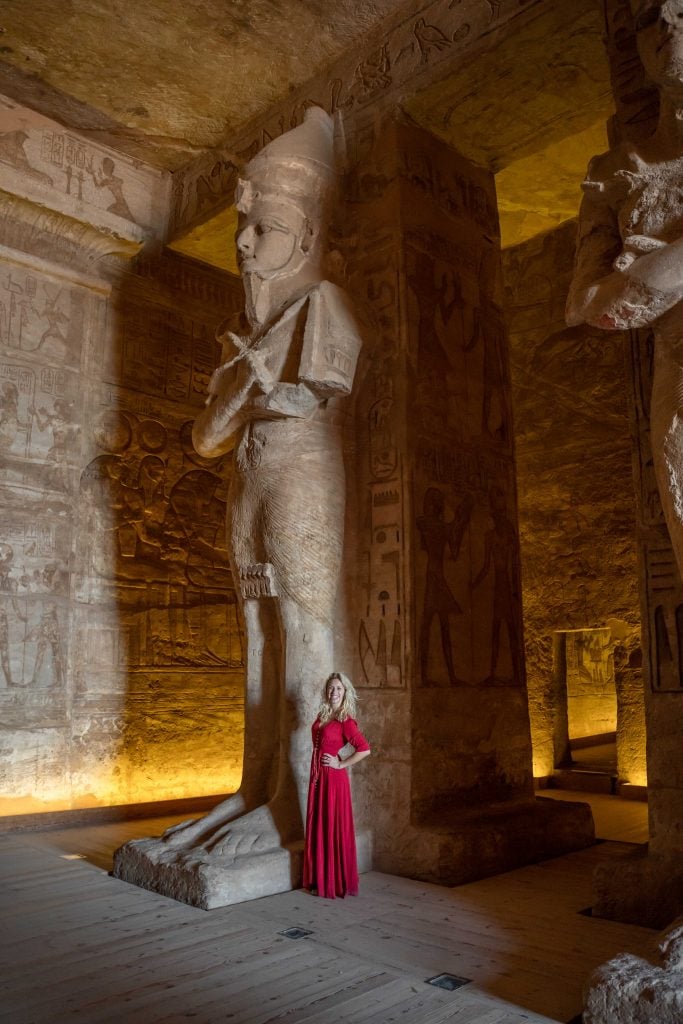 The reliefs seem to depict Ramses II during the Battle of Kadesh (modern day Syria), where he led a battle which defeated the Hittites. Other reliefs show Ramses II on his chariot and killing his enemies. 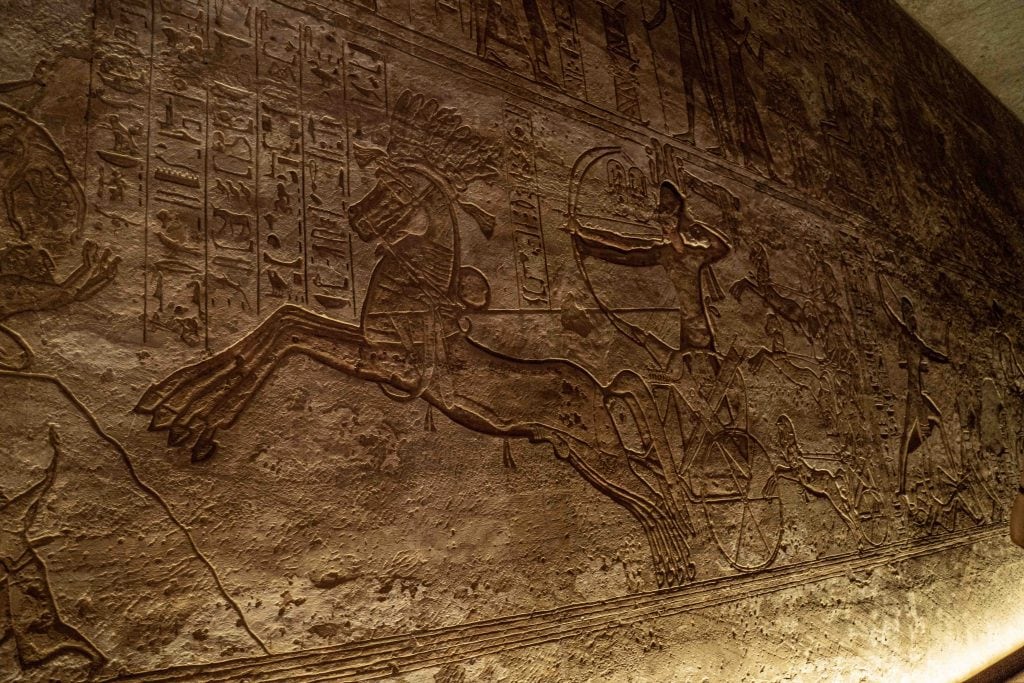 At the back of the temple, you can find statues of Ramses II beside the ancient Egyptian gods of Ra-Horakhty, Amun, and Ptah in the sacred sanctuary. Due to the positioning of the temple, the sun perfectly illuminates the statues of Ra-Horakhty, Ramses II, and Amun (Ptah – to the left – was purposely positioned so that it was never illuminated) on February 21st and October 21st, said to be Ramses II birthday and his coronation day. Expect to find hordes of crowds on those days! 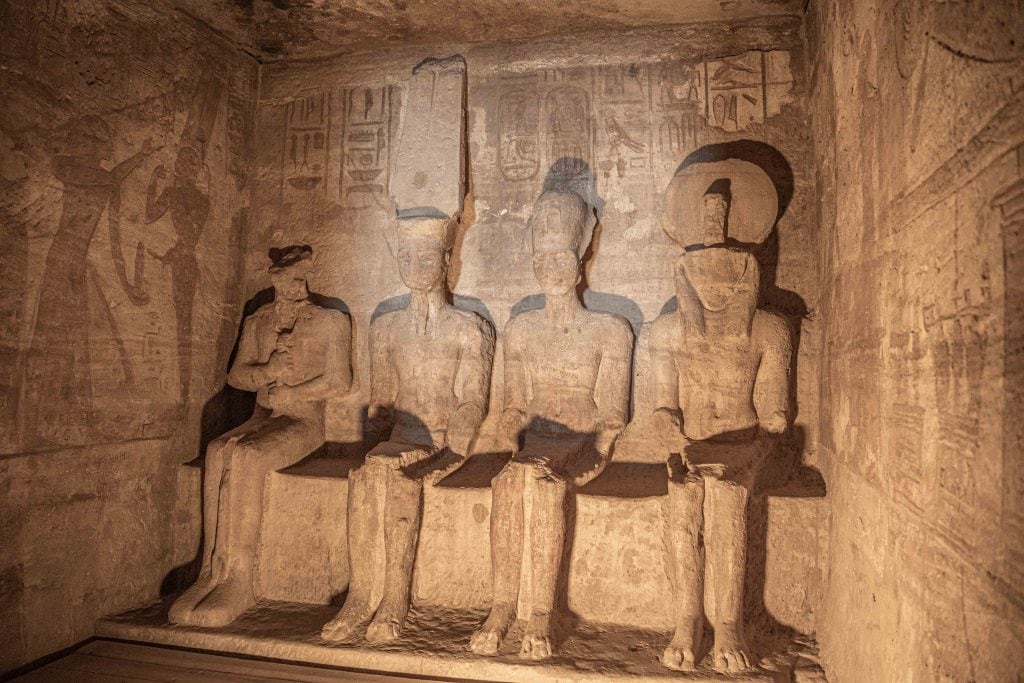 The Small Temple [Temple of Hathor and Nefertari]

To the right of the Great Temple, you will find the Small Temple. Depending on how crowded it is when you arrive, it might be best to start there (as we did) to let some of the crowds thin out. The Small Temple is dedicated to Queen Nefertari (the Royal Wife) and the goddess Hathor. This temple is also characterized by a facade featuring six colossal statues — four statues of the king and two statues of the queen. This is one of the only Egyptian monuments that features the statues of the king and queen of equal size as, traditionally, queens were never taller than the king’s knee. 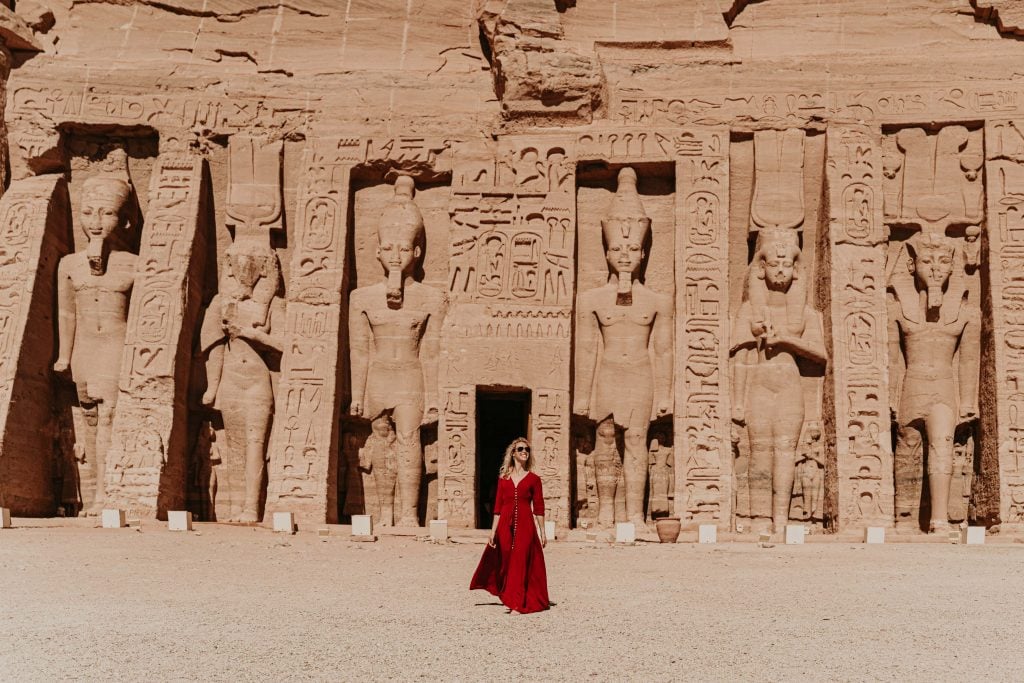 Going on an Aswan to Abu Simbel tour is an absolute must, can't you see why?!

The interior isn’t as grand as that of the Great Temple, but the reliefs are interesting, and you can see Ramses II and Nefertari making offerings to Horus (amongst many others). 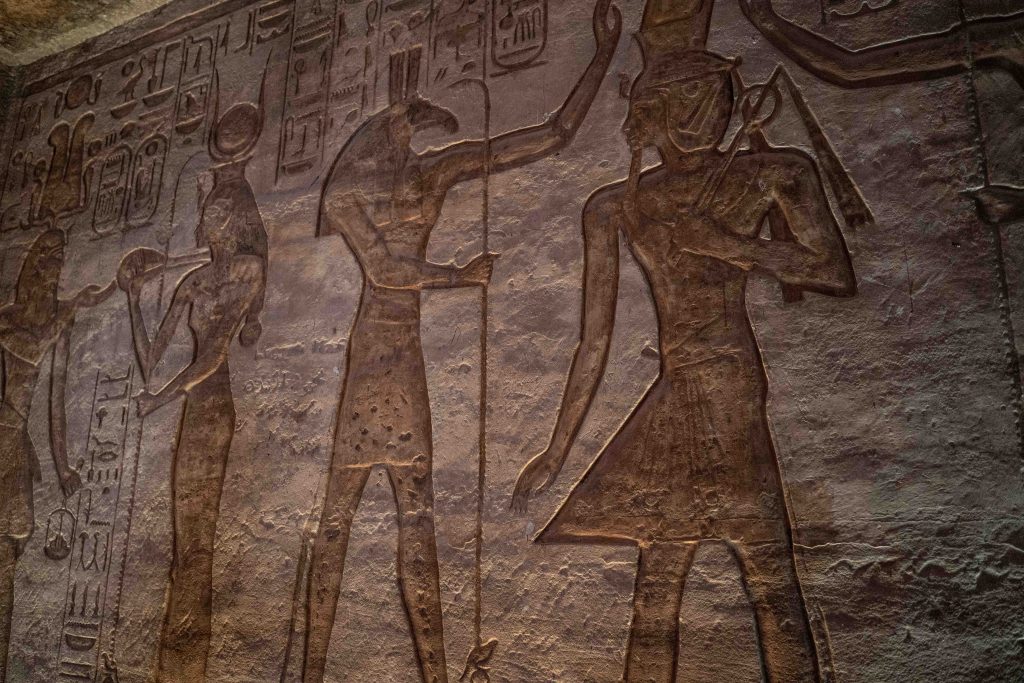 One of the many well-preserved reliefs inside

There are a few hotels in Abu Simbel, however, none of them have a great reputation and the reviews are lousy online. Originally I had wanted to stay overnight in Abu Simbel, however, after speaking with the lovely people at Aswan Individual, we agreed that it’d be far more comfortable to stay in Aswan instead. There are a variety of hotels in Aswan, and you can have a look at your options here. If you want to return to a comfortable spot after a long day of exploring, I highly recommend the historical Sofitel Legend Old Cataract – have a look at this beauty!

I bet you wouldn’t have guessed just how close Abu Simbel is to Sudan! In fact, I learned that you can take a ferry to cross over to Sudan nearby (although, I wouldn’t suggest this route). Have a look at this map to get your bearings before your Abu Simbel tour from Aswan.

When planning my trip to Egypt, I figured out all of the sites that I wanted to see, but realized that I didn’t actually know what to wear in Egypt! Unlike places like Oman, you do not need to be covered wrists to ankles, nor do you need to have your head and shoulders covered at all times (unless, of course, you’re entering a place of worship). That said, it is important to adhere to local cultures and customs, so I do recommend wearing moderate, loose-fitting clothing. It’s particularly important to have a sun hat to keep away those rays, sunblock, bug spray wipes, and comfortable walking shoes (I fell in love with these and used them daily). To view my travel packing list, with all of my travel essentials – and I mean all  of them – head on over to this article I wrote to pick and choose your favorite items!

Do You Have Travel Insurance?

You need travel insurance if you want to visit Egypt! As a rule of thumb, you should always have travel insurance when you leave your home country. Travel insurance is arguably the most important thing to have on hand (after your passports and visas). I’ve had to use my travel insurance multiple times on the road, even though I’m healthy. You never know when something might happen; take comfort in knowing that whether your flight gets cancelled or you wind up sick and in the hospital, you will be covered.

For any place that has faced a series of destabilizing events in recent years, be sure to select a plan that covers terrorism and political unrest. While I felt entirely safe in Egypt, as with anywhere in the world, you never know what could happen and it’s always better to be safe than sorry! I recommend World Nomads Travel Insurance for each and every one of you, as I used them on my most recent trip to Egypt too.. You can get a free quote here.

Ready For Your Abu Simbel Tour? Pin It Please! 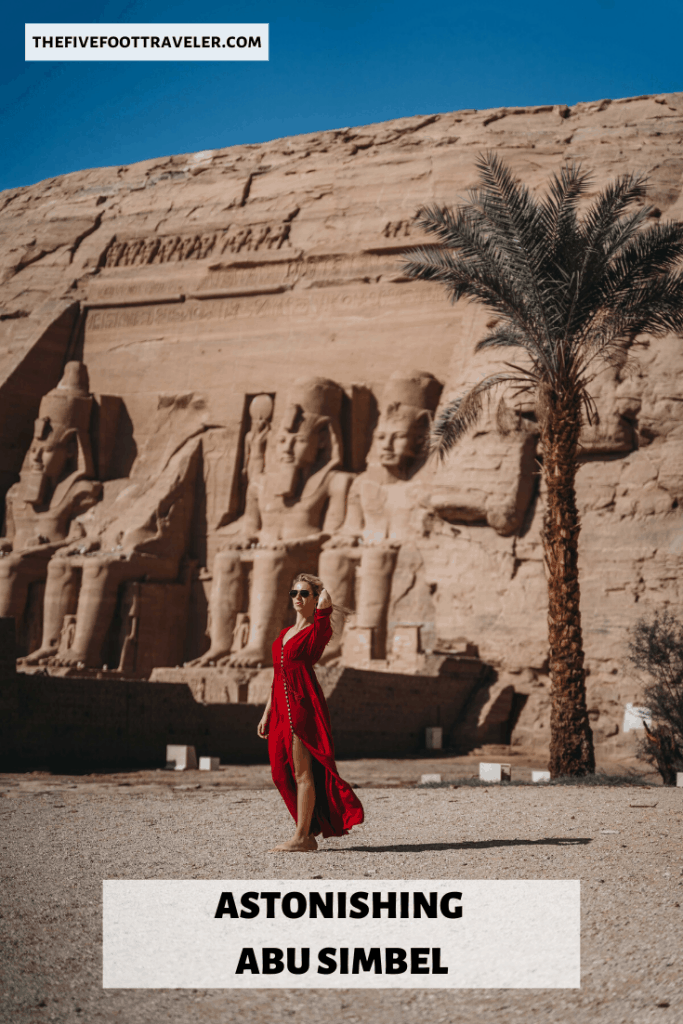