We awoke to a beautiful view of the Dead Sea and drove to the entrance of Wadi Mujib. Our guide decided not to tell us that we would get soaking wet, so we spent a few minutes scrambling to waterproof our bags. We put on the mandatory life jackets and started hiking. Within a minute, we climbed down a ladder straight into the water in the middle of the canyon walls. In knee-high water we began walking through the canyon, figuring that we were about to have a refreshing and relaxing morning hike. Refreshing, yes. Relaxing, not so much. Next thing we knew, we rounded a corner and realized that we would be hiking against (and up and over) rapids. While it was a blast, it was quite challenging on my hurt shoulders. Thank goodness for my fabulous brother who helped lift me up and pull me over some of the boulders (no thanks to our guide, Ali, who pretty much ignored us).

The water finally started to calm, and we figured that we must have looped and reached the end somehow. Then, we heard what sounded like immense, powerful rapids. Uh-oh. Instead, we turned the corner to find a beautiful waterfall between the canyon walls. We threw our lifejackets to the side and decided to go swim in the waterfall. The power of the falls felt incredible on my very sore shoulders. We crossed under the waterfall and found a small cave; we sat in it and looked out through the waterfall. After a bit of relaxing and free massage therapy, we decided it was time to head to our next destination. We slid down some slippery rocks with the rapids, subsequently getting sucked under the water every few minutes. Since we were going with the current, we later laid on our backs and let the current carry us down the canyon while we floated – so much easier! Even though we were soaked, the minute we exited the water-filled canyon we were dripping with sweat. It was that hot. 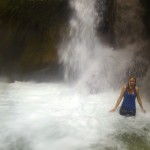 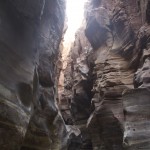 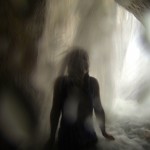 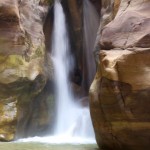 We took a short drive to Wadi Hisa for our second canyon hike of the day. Our guide manically drove us through the ins and outs of the canyon so fast that we were fearful that we would collide with the canyon walls. I opened my car door into water up to my thighs! Ali told us that he had to stay in the car to watch our luggage because it wasn’t safe to leave them unattended in an empty car. That should have been our warning sign. 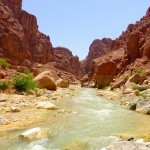 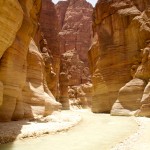 At the time, David and I thought nothing of it and were happy to have some time away from the miserable Ali. We trekked through the water for about ten minutes before we felt like a man was following us. David thought I was being paranoid and that we should give the man the benefit of the doubt. We did. We slowed down and he passed us, but then we heard a group of village teenagers approaching us from behind. They went ahead of us, whispered something to the man in front of us, and began to circle us. They shouted and we ignored their shouts. They asked if we were Israeli. They asked what we were doing. They asked where we were going. Each time, they got closer and closer. At this point we were uncomfortable – we had money, passports, smartphones, and cameras on our bodies – and decided to turn around calmly and head back to the car. They followed us.

Despite trying to avoid a straight path by climbing behind and over various boulders, our scurrying had nothing on the Jordanians. It was, in fact, an environment to which they were accustomed. When one of the guys poked me, that’s when I knew we had to keep moving. We tried to gain speed as they closed in on us. After what felt like ages, we rounded our final bend before reaching the car. A sense of relief overwhelmed us, that is, until we realized our car doors were locked and Ali was not in the car. A few seconds later we saw him praying in a canyon cave. He looked up and saw the boys yelling at us. Ali instantly unlocked the car doors and started screaming at the boys in Arabic. We’re lucky to have been unharmed, but it was too bad that we were unable to explore another beautiful canyon.

Happy to be in a car, we drove about half an hour to a lookout over some of Jordan’s canyons. Here, we ate a disgusting fly-infested lunch…or at least tried to.

It was time to head back to Petra for the night. Along the way, we stopped to look at Jordan’s largest archeological reserve from above. People say that the reserve is 6,000-8,000 years old. The far end of the reserve houses copper mines that King David and King Solomon used way back when. 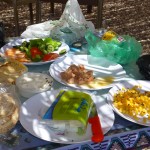 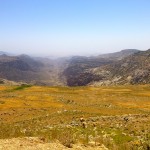 Ali drove 90 mph (144.8 kph) all the way to Petra on narrow, windy, rocky roads. We arrived in Petra at 3pm and spent the rest of the afternoon unwinding from our eventful, stressful afternoon.