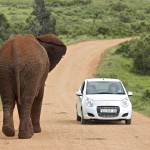 5:30am, and we were at the gate ready to enter Addo Elephant National Park (thanks for the suggestion Savi and Vid!). For a while, we had only seen a mouse and a hare, so we were a bit concerned that we wouldn’t see much wildlife due to the chilly, damp morning. 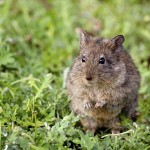 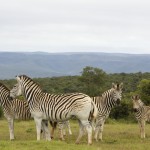 After a bit of time, the elephants slowly made themselves visible – first a baby elephant, then a pair of elephants, then another. We watched as an elephant approached two other elephants and sat amazed as they began to fight. They wrapped their trunks around each other and interlocked their tusks; they rough-housed for about forty minutes. All the while, no other cars joined us, so we felt like we were given our own very special moment with the elephants. 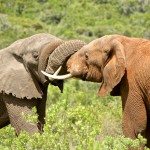 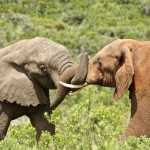 It wasn’t until we hit the southern portion of the park that we saw a breeding herd of elephants. They weren’t at all afraid of the cars, and walked in between them without hesitation. All in all, it was a very successful game drive. 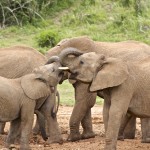 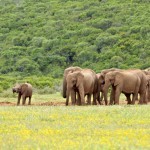 After a fabulous braai with some friends we met at Bulungula, we attempted to sleep. It was a freezing cold night by anyone’s standards, but especially when you consider the fact that we were in Africa! After much tossing and turning in my tent, I finally fell asleep wearing three layers of clothing, a fleece sweatshirt, an earband, gloves, and wool socks…Who would have thought?!

The following morning, we were up at 5am to go on one final game drive before continuing with our road trip. We didn’t have much luck, but the highlight of the morning was seeing a cape buffalo right next to my side mirror! 4 of the Big 5 down, 1 to go! 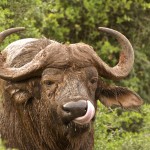 We headed back to camp to grab breakfast, and heard from our friends that they saw two male lions walking down the road that we drove down. Considering the fact that all of us left the campsite at the same time, it is likely that we missed them by a few seconds! Such a bummer.

As I was in our tent packing up, I looked up to see one very hairy leg on the tent above my head. I froze. It moved, and a second hairy leg made an appearance. I can handle most things, but gosh I hate spiders…especially ginormous, hairy Rain Spiders. Luckily, the boys took over breaking down the tent…

We decided to head to Jeffrey’s Bay (JBay) via the Southern exit of the park so that we had one more opportunity to see elephants. I first heard of JBay many years ago when my brother was watching the movie Endless Summer II, which featured a segment filmed there. It is well-known amongst surfers as being one of the best surf breaks in the world. JBay reminded us of a small Californian beach town, and a surfer’s paradise. There isn’t much to do other than beach it but, obviously, that’s the draw to JBay.

The whole time I was there, I couldn’t stop thinking about my brother and how much he’d love it! Anyone that knows me knows that my brother has always had a passion for surfing (as I type this, he’s streaming the Volcom Pipe Pro on our TV). While on the search for the perfect shirt for him, I began chatting with one of the shop owners. As it turned out, he just happened to be a former ASP judge for the major surfing competitions in Hawaii; ironically, he knew some of my Mauli Ola Foundation friends, Kala and Hans! Small world.

Travelers Tip: Head to the Surf Shop outlets before 5pm. The Billabong outlet is a must, as most shirts are under $10 USD.