A Taste of the Traditional: Sifnos, Greece

The Greek Islands are diverse and offer plenty of different atmospheres and beaches. You may find yourself associating them with outrageous night life or spectacular beaches, or both. Rarely do I listen to anyone tell me how calm and rather unpopulated (tourist-wise) an island is, or that life on the island moves slowly and does not include young crowds ready to destroy their livers every night. I have found such an island that does not attract the hordes of reckless youth that some of the others do. 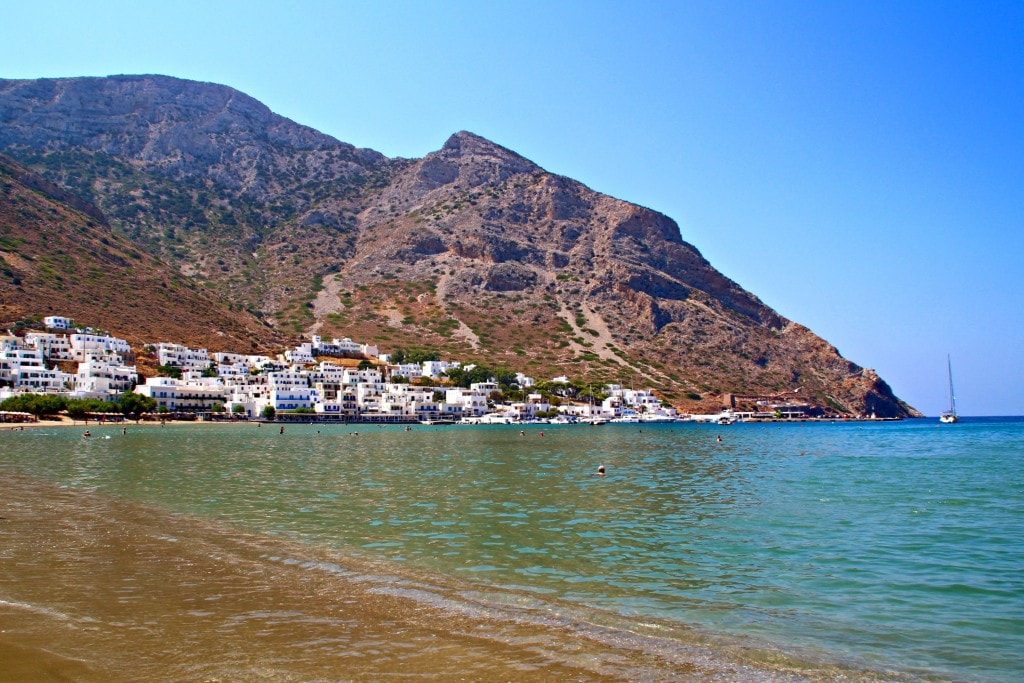 We arrived in a harbor incased by mountains on all sides. I watched as Philip fell in love with the surroundings; I, too, was in awe at the mountainous chain that encircled the harbor and extended towards the center of the island. After we disembarked from the MasterJet, we peered at the other side of the harbor, only to see the name “Hotel Boulis” in big, blue letters spelled out on the front of a building. 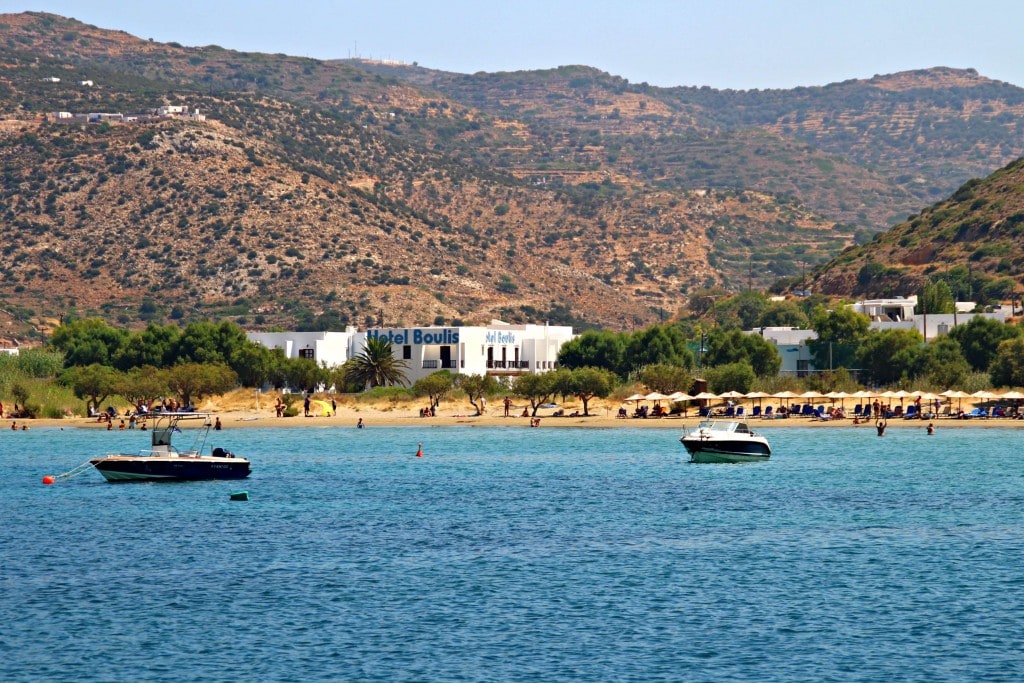 It only took ten minutes to walk to Hotel Boulis. In conversation during check-in, we found out that the receptionist, Lyn, was originally from Australia, but went to Sifnos for a short vacation and stayed for over 20 years. This should give you an idea of the beauty of the island and the reason for which you should add it to your “places I want to go” list. Hotel Boulis was simple and had a classic look to it. It had wood accents all around, and every room seemed to have a balcony and view. 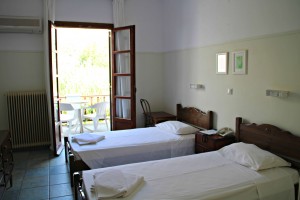 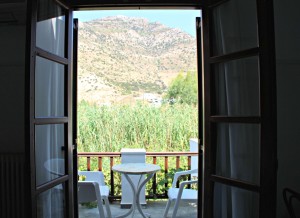 The location is ideal, with one of the Cyclades’ top rated beaches, Kamares Beach, literally a one-minute walk out the front of the hotel. There are beach chairs to rent, and they only cost about €3 each for the day. The water of Kamares can be described as refreshing and cool in the hot Greek sun, and the beach has a long stretch of coast when compared to the other Greek islands. The location is also useful when thinking about departing, as the rather low-key port is only a 10 minute walk, making luggage transport easy.

The bus system on the island is not very extensive and adds up price-wise extremely fast. We took the bus to the nearest town, Apollonia. From there we walked to Kastro, under the recommendation of Lyn from Hotel Boulis. The trail takes you through some areas in between towns where you can observe farmers at work or walk through small streets you might not wander through otherwise. The entire walk to Kastro from Apollonia took us about 30-40 minutes. 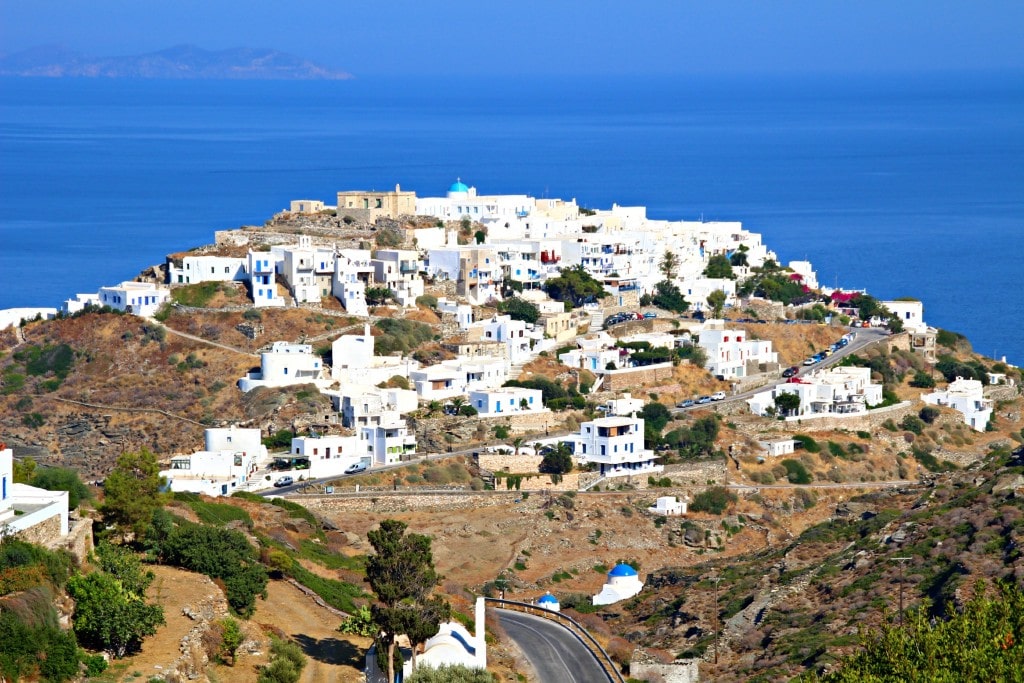 Kastro is a small town that settles its foundation on a small hill. The hill’s backside has an amazing view over the sea and a charming little church built at the outermost edge of the town that juts out into the sea. 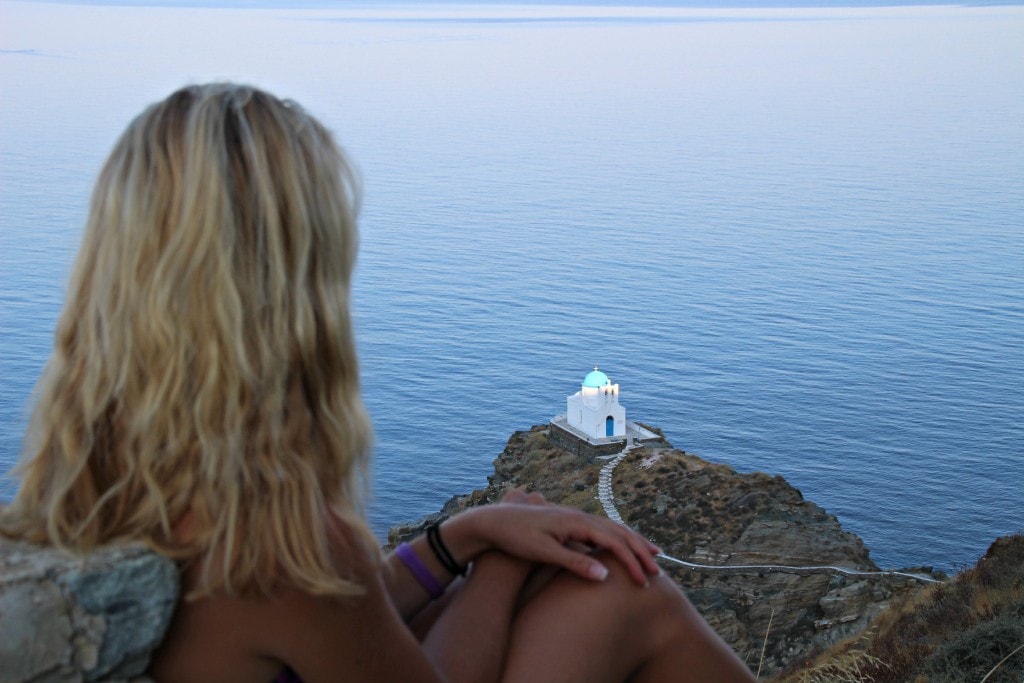 Kastro’s main attractions are this iconic church, a small beach with indescribably clear water, and ruins of an Acropolis at the top; other intrigues include very cute, picture-worthy streets. 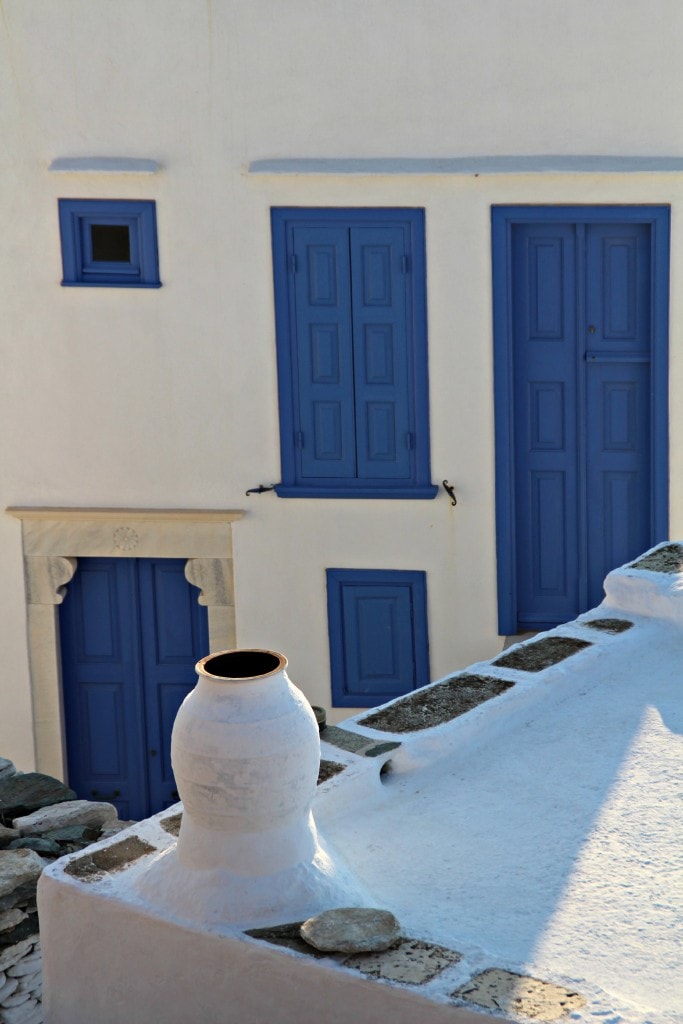 The wait for the bus, once we were done exploring Kastro, was over an hour long. Lyn, from Hotel Boulis, encouraged us to give hitchhiking a try on the island. We decided that we would give it a shot for the ride back to Apollonia. Total waiting time was maybe 10 minutes before a car picked us up. The very kind woman from Sifnos dropped us off in Apollonia, where we were so amazed at the ease and success of hitchhiking that we tried it again. Once more, we were picked up rather quickly, by a French couple, who loved taking in the beauty of sunsets just as much as we did!

They dropped us off in the town of Kamares, directly next to our hotel. We immediately ran towards the beach to catch the sun setting over the bay and in between the mountains surrounding Kamares. 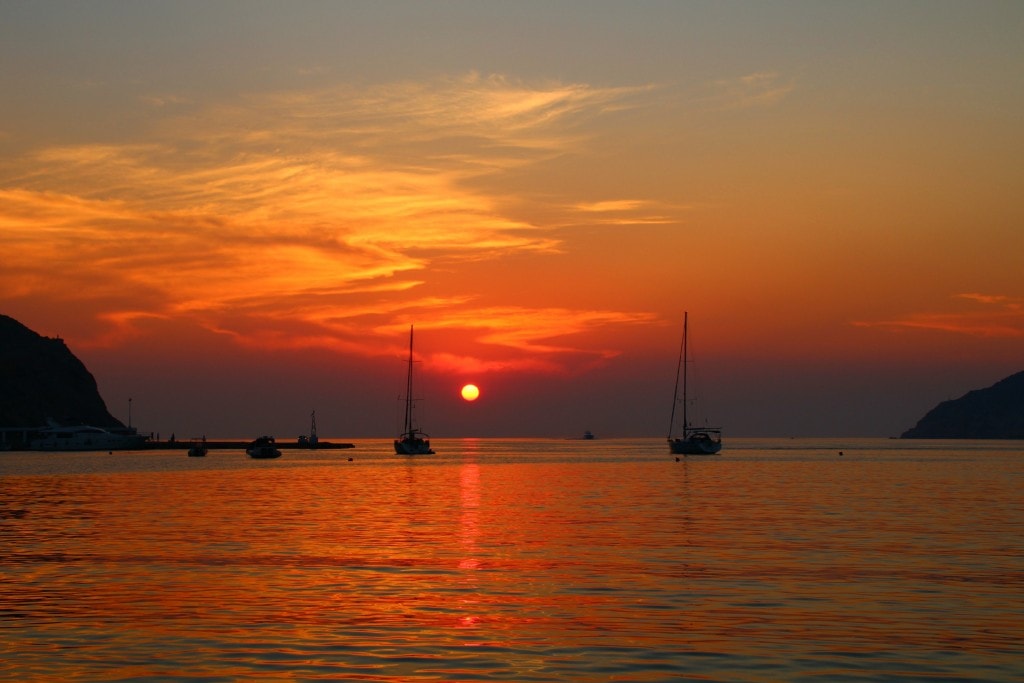 Certainly, Kamares is home to some beautiful sunsets over the beach.

The next day we ate breakfast at Hotel Boulis. The food was rather typical of the Greek islands; Greek yogurt and granola (our favorite, and still something we greatly miss from Greece), eggs, meat spreads, and fruit. That day we spent mostly at the beach, with a break to eat Kalamata olives with our hands by the port. It was while we were eating the olives and watching the waves that a Greek local gave us a thumbs up for what we were doing. Success. 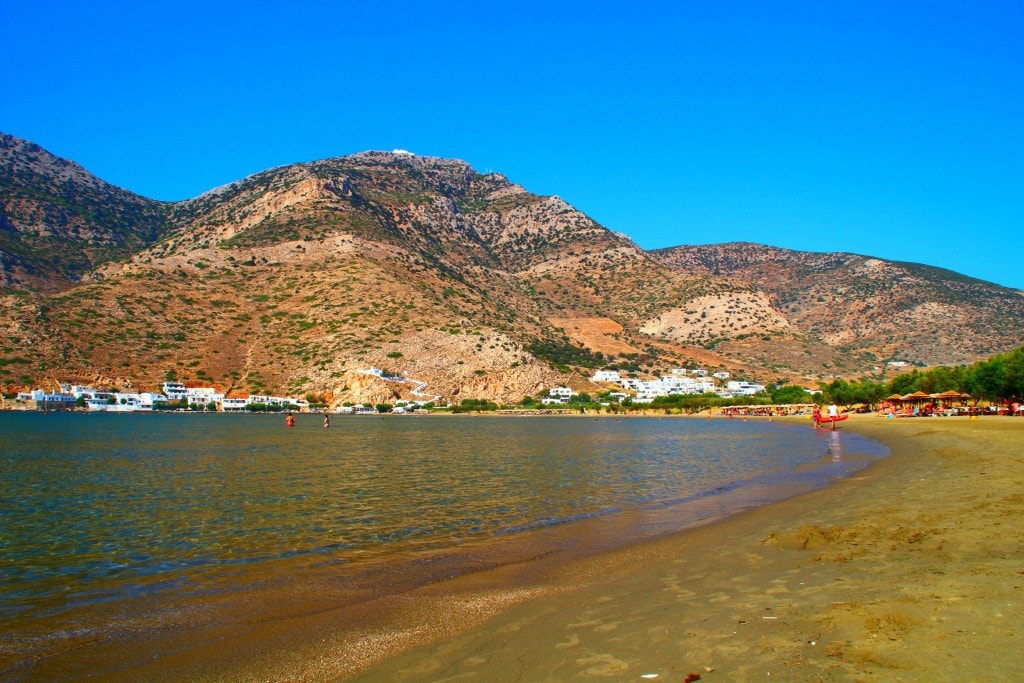 Later on that evening we tried our hand at hitchhiking again. Like the previous times, we basically stuck out our thumbs and were quickly picked up by two female locals heading toward the food festival on the outskirts of Apollonia. Without asking where we were going they said, “Get in,” and gave us a lift. Can you tell where everyone on the island was headed? The food festival was worth the trip, as cooks from all the Greek islands made their way to Sifnos to showcase their cuisine in the form of free samples. Everything was offered, from wine to liquor to spreads of different kinds of food to fish. The festival even included traditional song and dance performed by locals that paraded through the streets; we followed for a while until we decided to head back to Hotel Boulis. We hitchhiked to Kamares without any difficulty and realized that Sifnos really was an island very ideal for hitchhiking, unlike many of the other Greek islands.

Overall, our stay on Sifnos was extremely relaxing and felt more traditional than we had experienced on the other Islands. We were not surrounded by remotely the same number of tourists as the others, and were able to experience a local festival that pooled together food samples from all of the Greek Islands. Hotel Boulis was the perfect location for moving around the island and made for a hassle-free morning when all we needed to do was pick up our bags, walk around the harbor, and catch our ferry to the next island.

For a taste of the traditional, include Sifnos and Hotel Boulis in you next Greek island adventure.

**Special thanks to Hotel Boulis for kindly offering me a complimentary stay. As always, all opinions are my own.