10 Things to Do in Belgrade

Did you know that Serbia’s capital city, Belgrade, has been rebuilt over forty times due to destruction from war? Or that Belgrade has had more wars on its soil than any other European capital? Or that their first democratic government wasn’t established until 2001? For some background, Serbia was first part of the Roman Empire, then the Byzantine Empire, then the Hungarians, then the Turks, then the Austrians, then the Serbian Monarchy, then the Socialist Yugoslavia, then the Federal Republic of Yugoslavia, then the Union of the Republic of Yugoslavia with Serbia and Montenegro, then Serbia and Montenegro, and then after a peaceful separation and referendum, Serbia! It’s no wonder that Belgrade has had such a tumultuous history! While Belgrade is not quintessentially beautiful like some other European capitals, it has its own charm deeply rooted in history, and definitely shouldn’t be missed! We went on a free walking tour of Downtown Belgrade and 20th Century Belgrade, as well as a 10 euro Communist tour. We learned that there were so many things to do in Belgrade…

Republic Square is the central meeting point within Belgrade. It’s recognized by the oldest statue in Belgrade, a statue of Prince Michael who liberated Belgrade and the surrounding Serbian cities from the Ottoman Empire in 1867. He then went on to help with the cultural development of the city, having developed the National Museum and National Theater. Prior to World War II, the square was called Theater Square, as Serbia was still a dynasty. It wasn’t until after WWII that Tito declared Yugoslavia a Republic that Republic Square got its name. 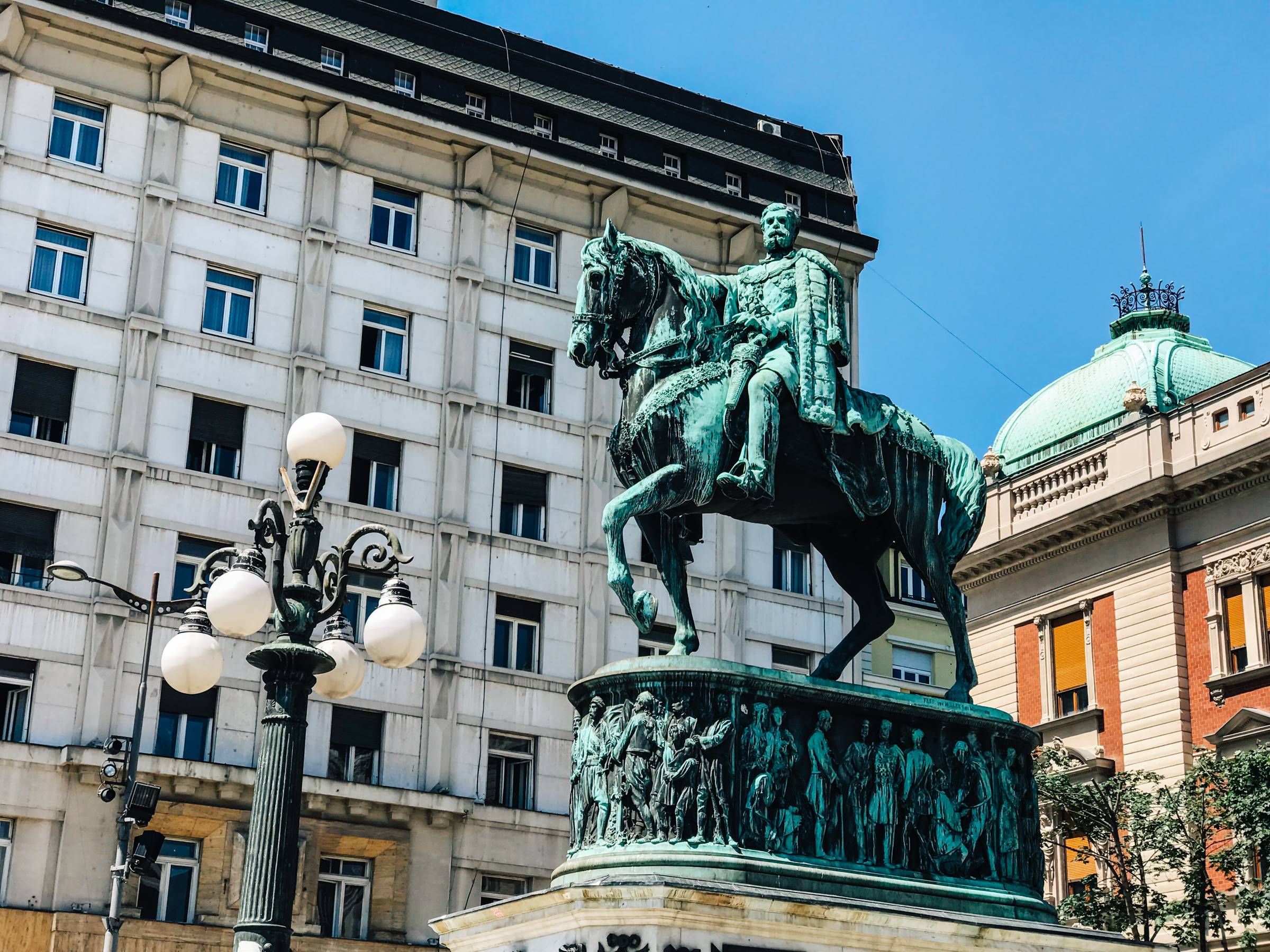 Republic Square – Things to do in Belgrade

Skardarlija is the oldest Street in Belgrade, located in the Bohemian Quarter. It still retains the quaint cobblestone and is dotted with plenty of cute kafanas and cafés; it is certainly one of the prettiest things to do in Belgrade. The Bohemian Quarter came to existence thanks to the Gypsies in 1830 and, by the late 19th century, people began journeying over to this area to play and listen to live music all night long. That vibe still rings true today! Be warned though, this is quite the touristy street! In fact, Skadarlija contributes to one-third of the city’s foreign currency income! 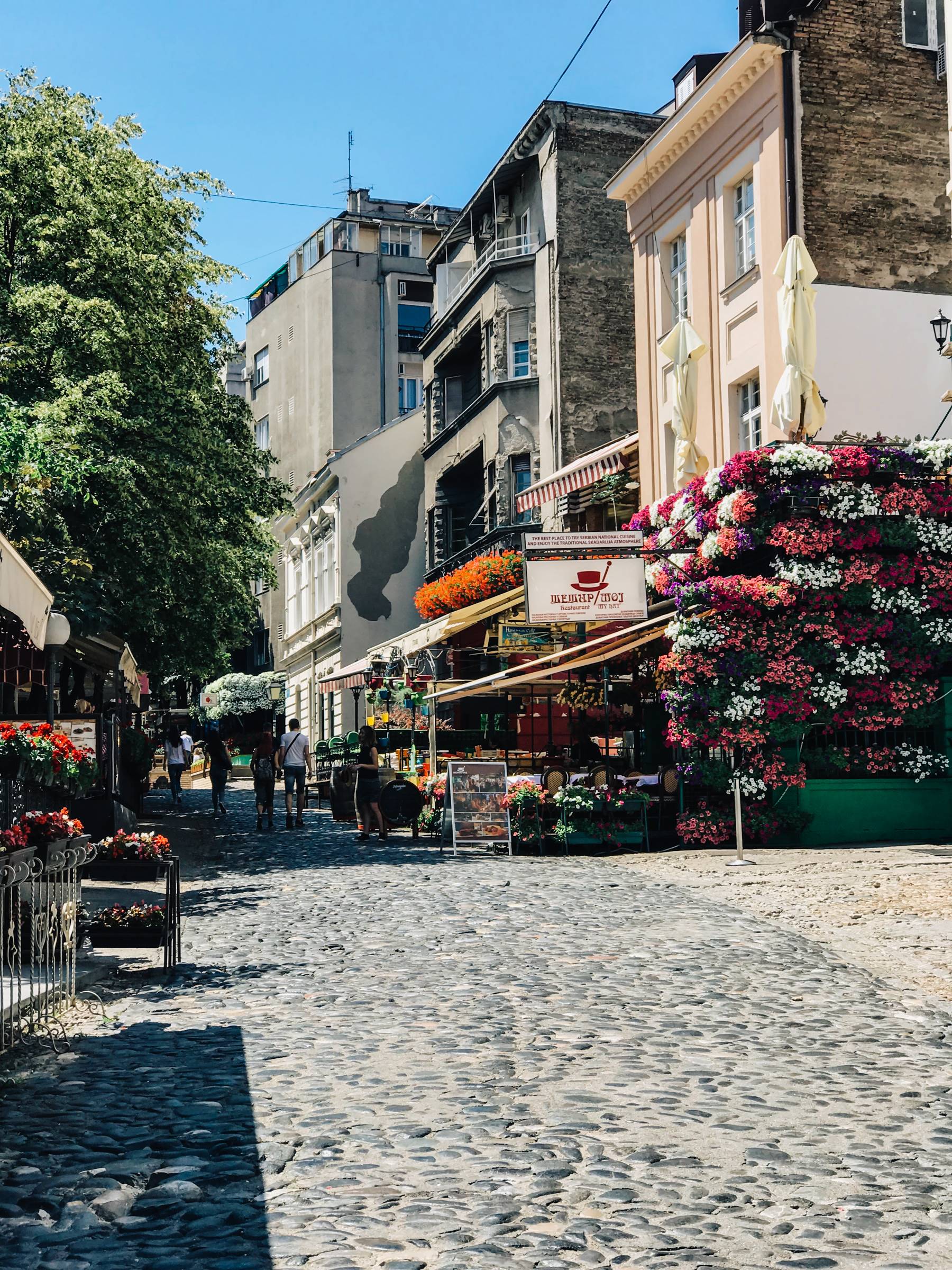 Skadarlija – Things to do in Belgrade

Belgrade Fortress consists of the old citadel and Kalemegdan Park at the confluence of the Sava and Danube Rivers. It has been destroyed and rebuilt for centuries and centuries, due to all of the wars that have taken place over the years. In fact, Kalengaden Park completely covered a military bunker in 1948; it was built because Serbia was afraid that Stalin could attack at any moment. The craziest part about it is that the military bunker wasn’t even discovered until 2008, making it one of the most interesting things to do in Belgrade! 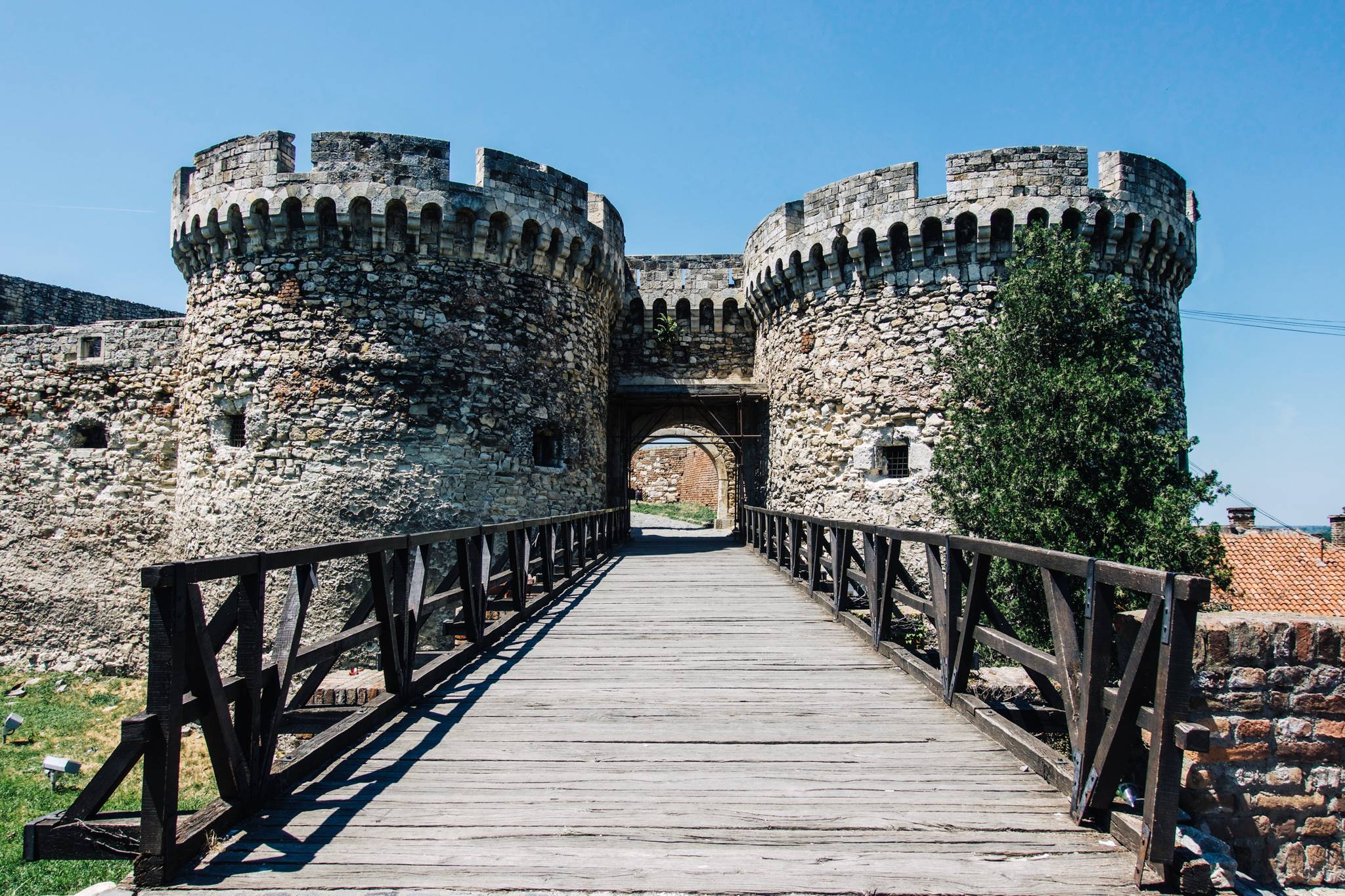 Belgrade Fortress – Things to do in Belgrade

Hundreds of years ago, the city of Zemun used to be an entirely different country, occupied by the Austro-Hungarian Empire. When you go from downtown Belgrade to Zemun, it feels as if you’ve crossed into a different country as it has such a unique feel. In fact, up until World War II, Zemun was just a neighboring city down the river! It wasn’t until after the war that Zemun was considered part of Belgrade. 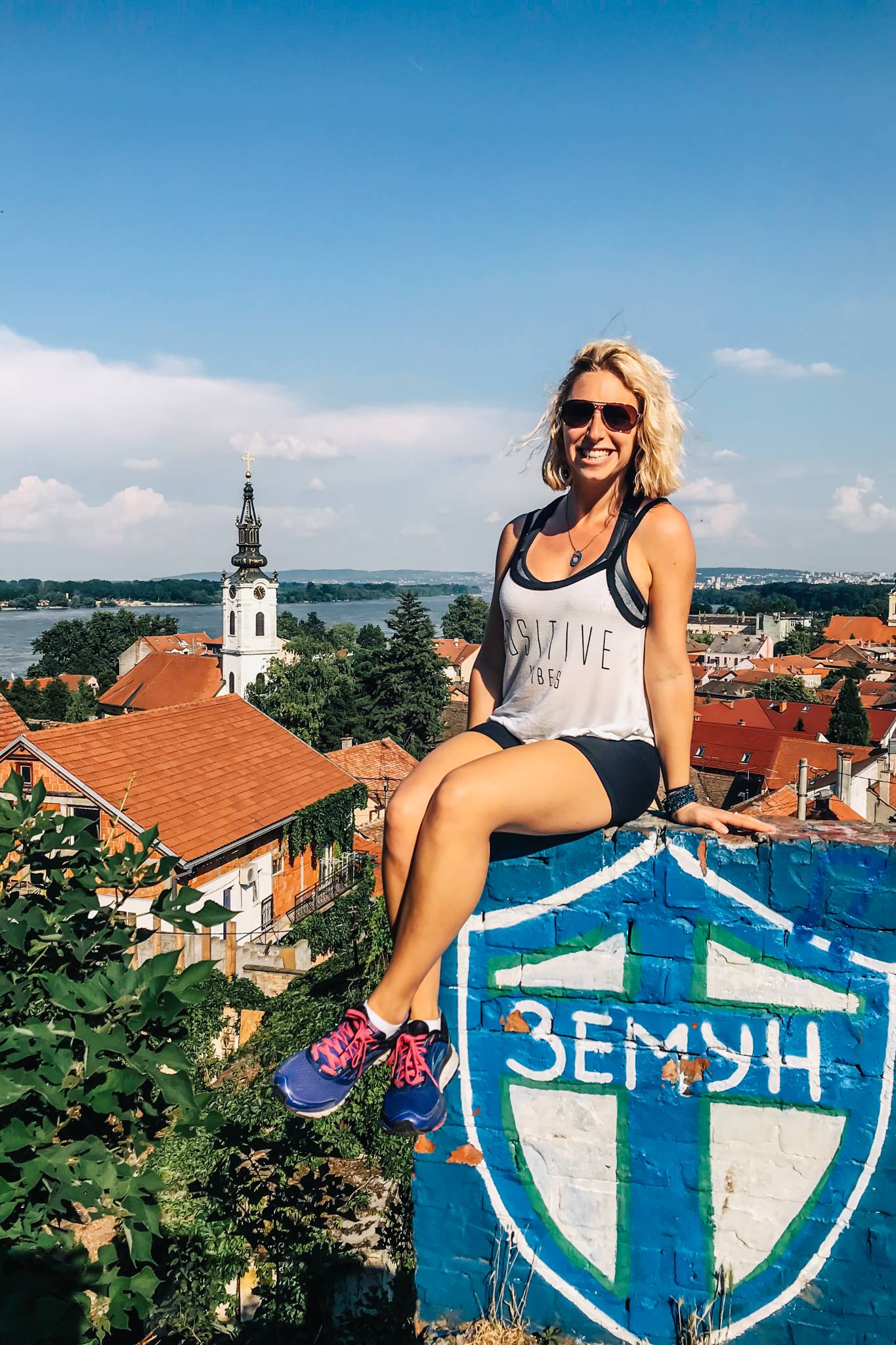 Zemun – Things to do in Belgrade

Despite looking like it was built in the 14th Century, St. Mark’s Church was actually constructed in the 20th Century! St. Mark’s Church used to be the biggest in the city, and tried to revive the old styles of the Middle Ages. As with most Serbian Orthodox Churches, there are no pews or chairs as the congregation is expected to stand throughout the service, no matter how long. 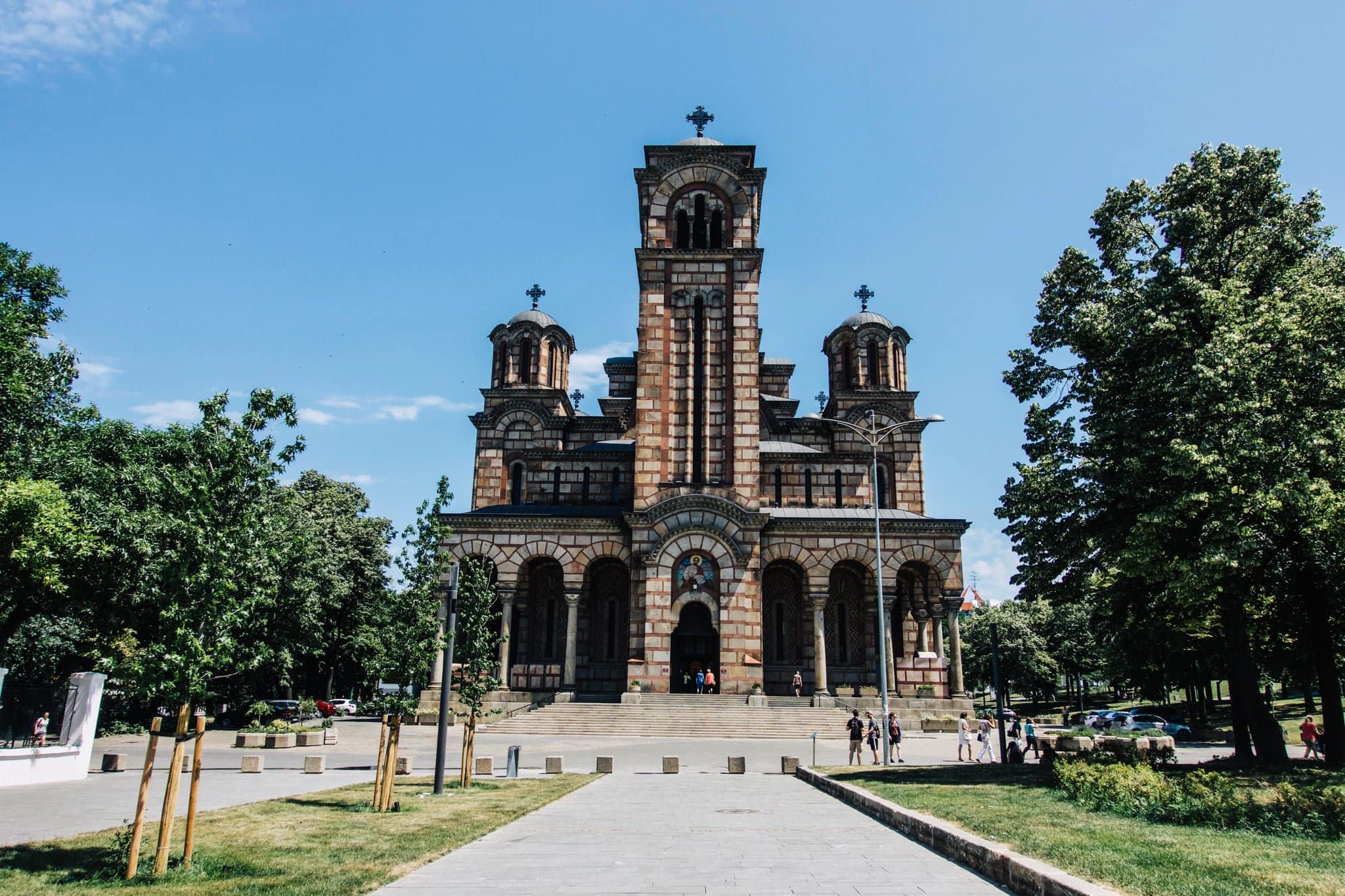 St. Marks Church – Things to do in Belgrade

The bombed radio television of Serbia building was intentionally left as a monument to memorialize the events of the NATO bombings of 1999. The bombings were intended to hit infrastructure throughout Belgrade – with warning – yet civilian people were killed when the building was made a target, as they weren’t given any warning. There is a plaque beside the viewpoint simply stating, “Why?” with the names of those killed in the attack. 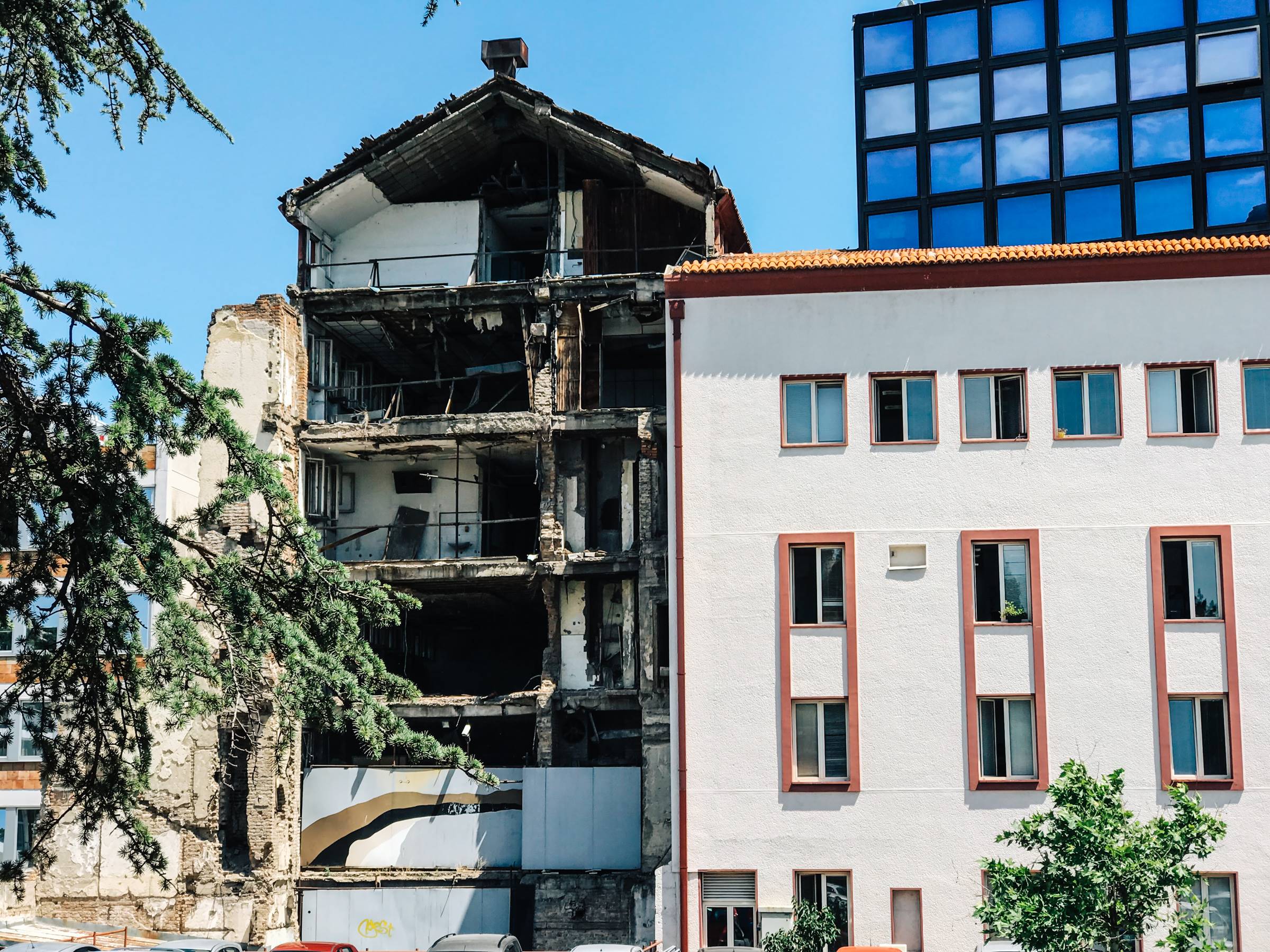 Radio Television Building – Things to do in Belgrade

The Church of Saint Sava is the largest church in Serbia, and ranks amongst the largest churches in the world (#3 or #5 depending on your source). It’s named after the founder of the Serbian Orthodox Church, and despite beginning construction in 1935, it still is not complete. The exterior is beautiful and dominates Belgrade’s cityscape, yet the interior is completely empty. The main dome’s mosaic is complete (after the Russians donated 4 million euros to complete the mosaics), but the rest remains underwhelming. Do enter though, and be sure you go down into the crypt, as that’s bright and beautifully ornate. 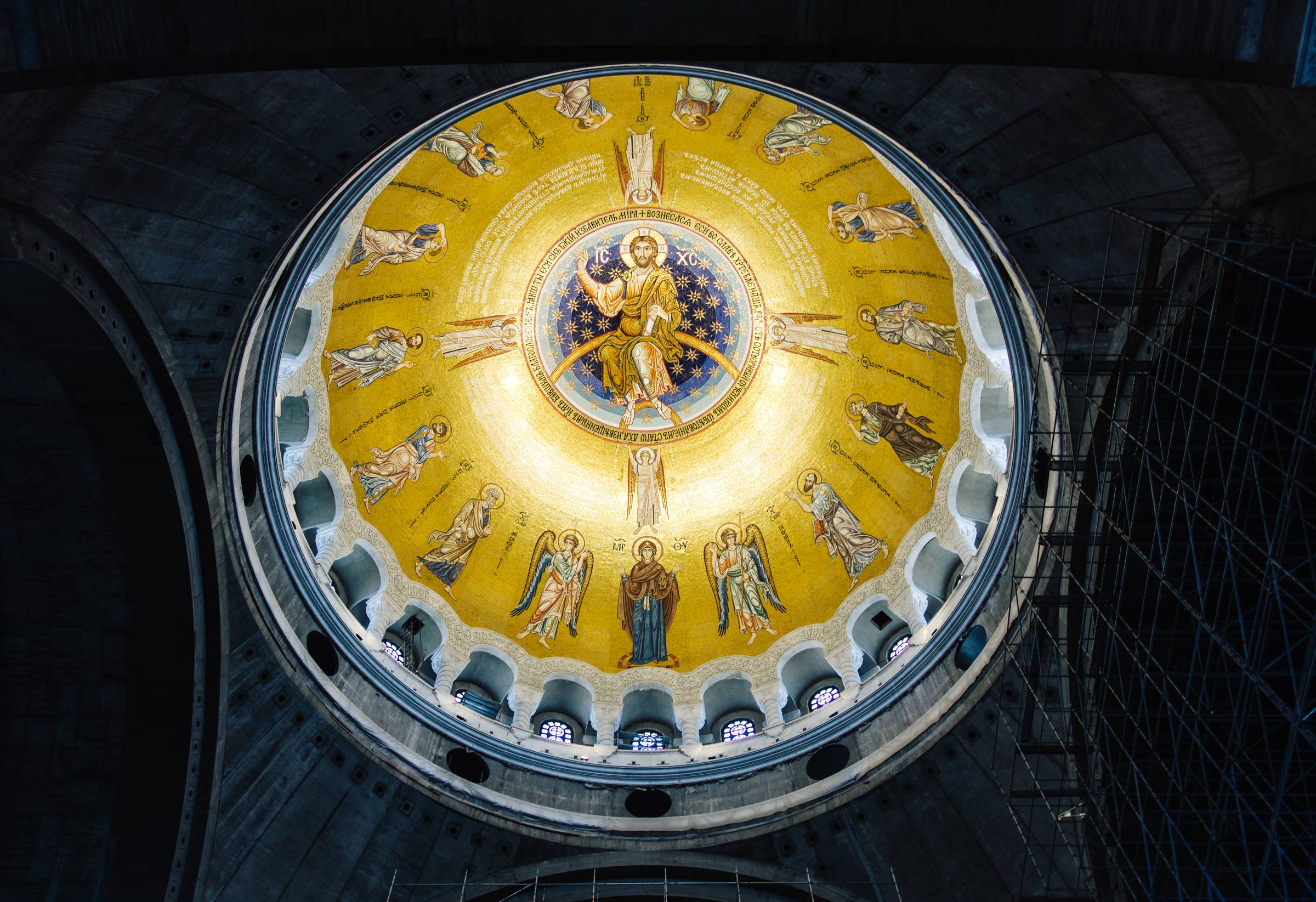 Church of Saint Sava – Things to do in Belgrade

The second set of visible bombed buildings in Belgrade used to be the site of the Military of Defense and Defense Headquarters prior to the NATO bombing. Unlike the Radio and TV building, these buildings are not there to serve as a reminder; they’re simply there because they have not been a priority for the government to rebuild. Without getting into the Serbia-Kosovo conflict much, the NATO bombings of 1999 were actually illegal, as NATO chose to attack before getting approval. In order for NATO to enter a country, the country must be a NATO ally (Kosovo is not) and approved by the UN (and the bombings weren’t first approved by the UN). Because of this, there is much controversy over the NATO bombings being illegal. 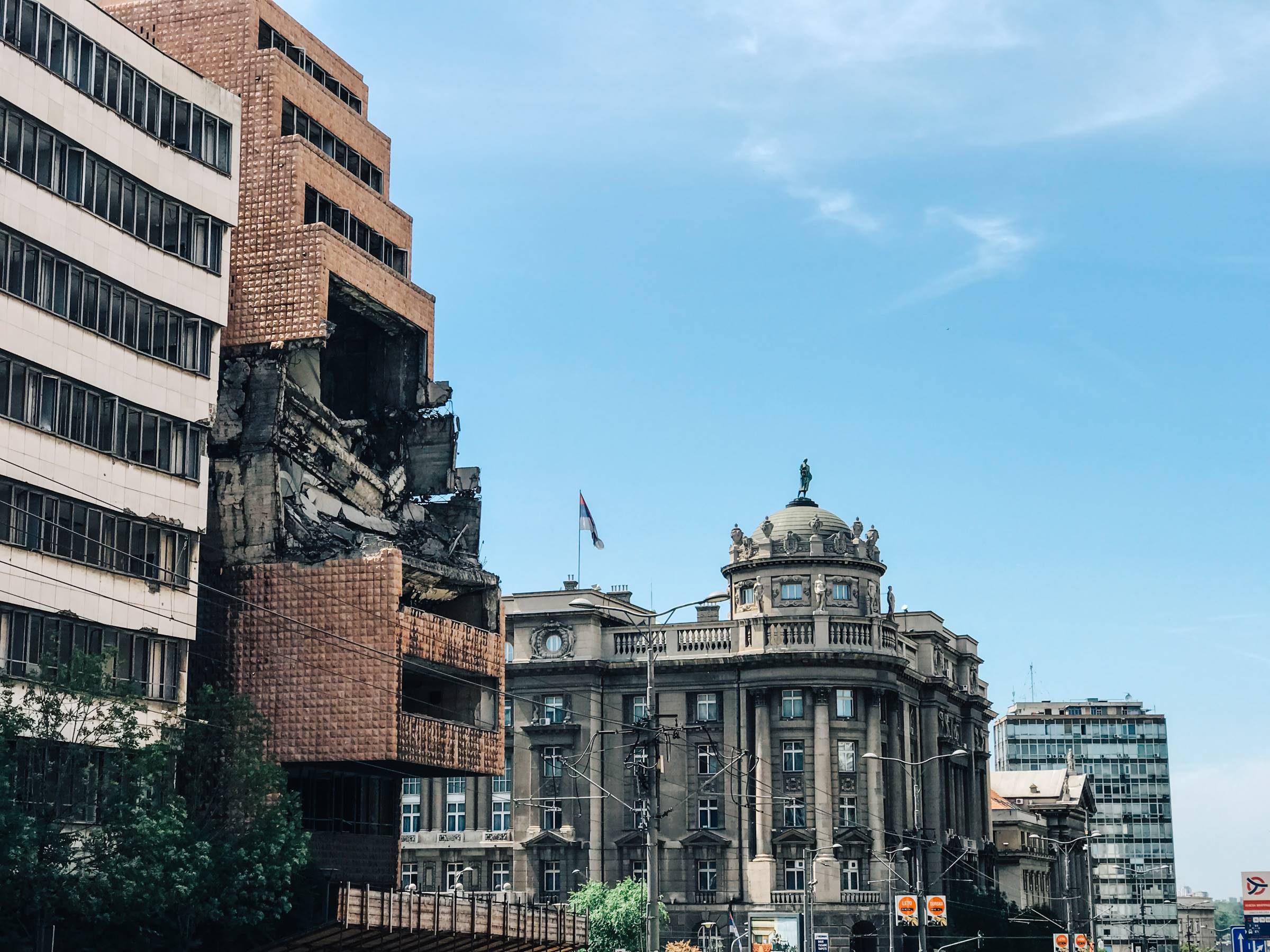 Bombed Buildings – Things to do in Belgrade

The House of Flowers was Tito’s Winter Garden and his permanent residence in his final years. It was Tito’s wish to be buried here when he died, so the government agreed to honor his wish (despite being in complete disarray after his death). Tito died on May 4, 1980 at the age of 88 years old in Ljubljana, Slovenia and there were more country’s leaders represented at his funeral than there we not. On the way up to the House of Flowers, you will see one of the few remaining statues of Tito left that haven’t been destroyed, then his tombstone, and a small museum about Tito’s life and successes. 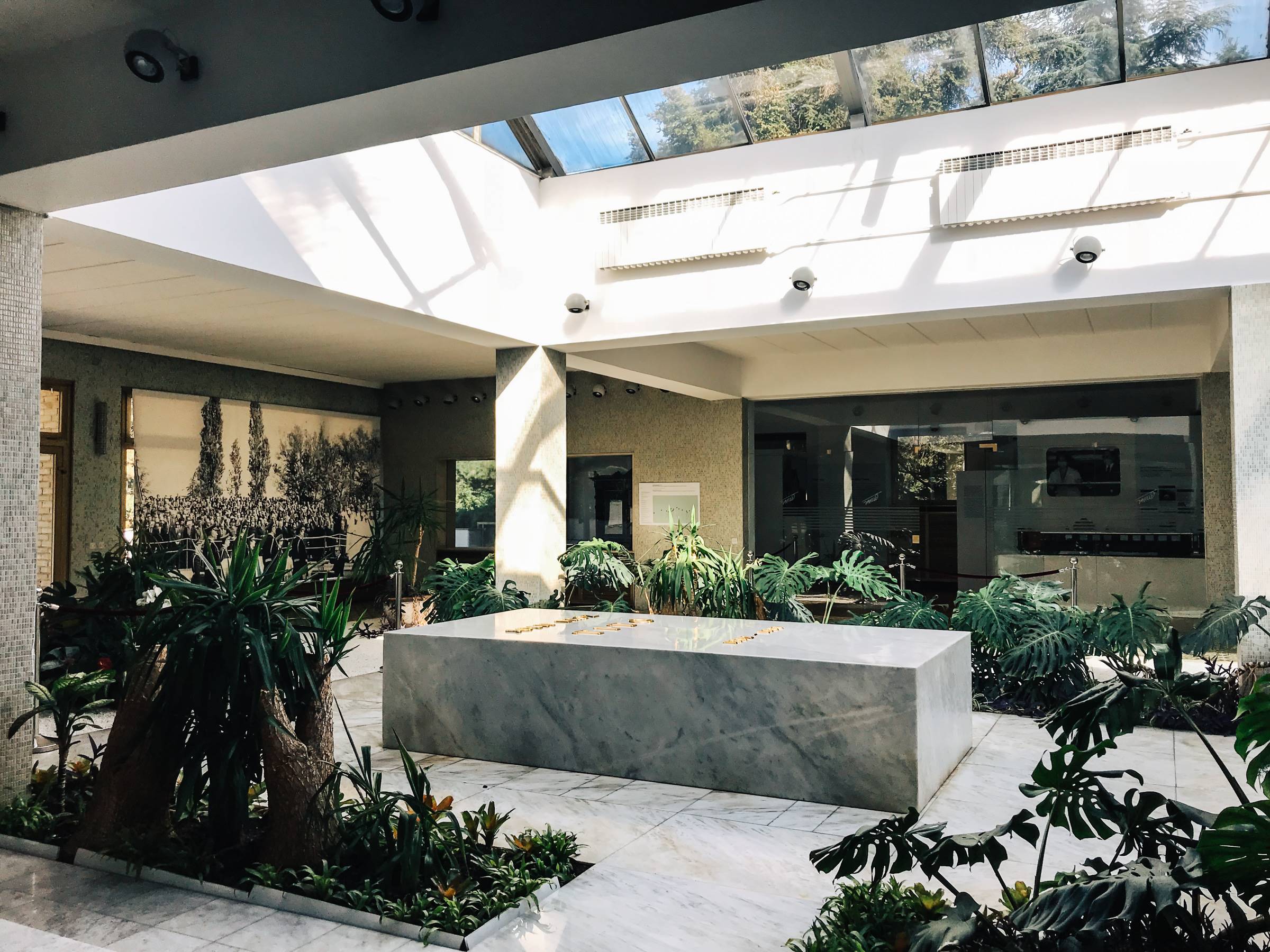 House of Flowers – Things to do in Belgrade

The Pedestrian Street – Knez Mihailova – is a must for anyone wandering through Belgrade. It’s wide and lined with shops, and is perfect for a morning stroll. It’s named after Prince Michael and the only street that hasn’t changed its name over the years! If you follow the street from the beginning to the end, you will start by Republic Square and finish up by Kalengaden Park. 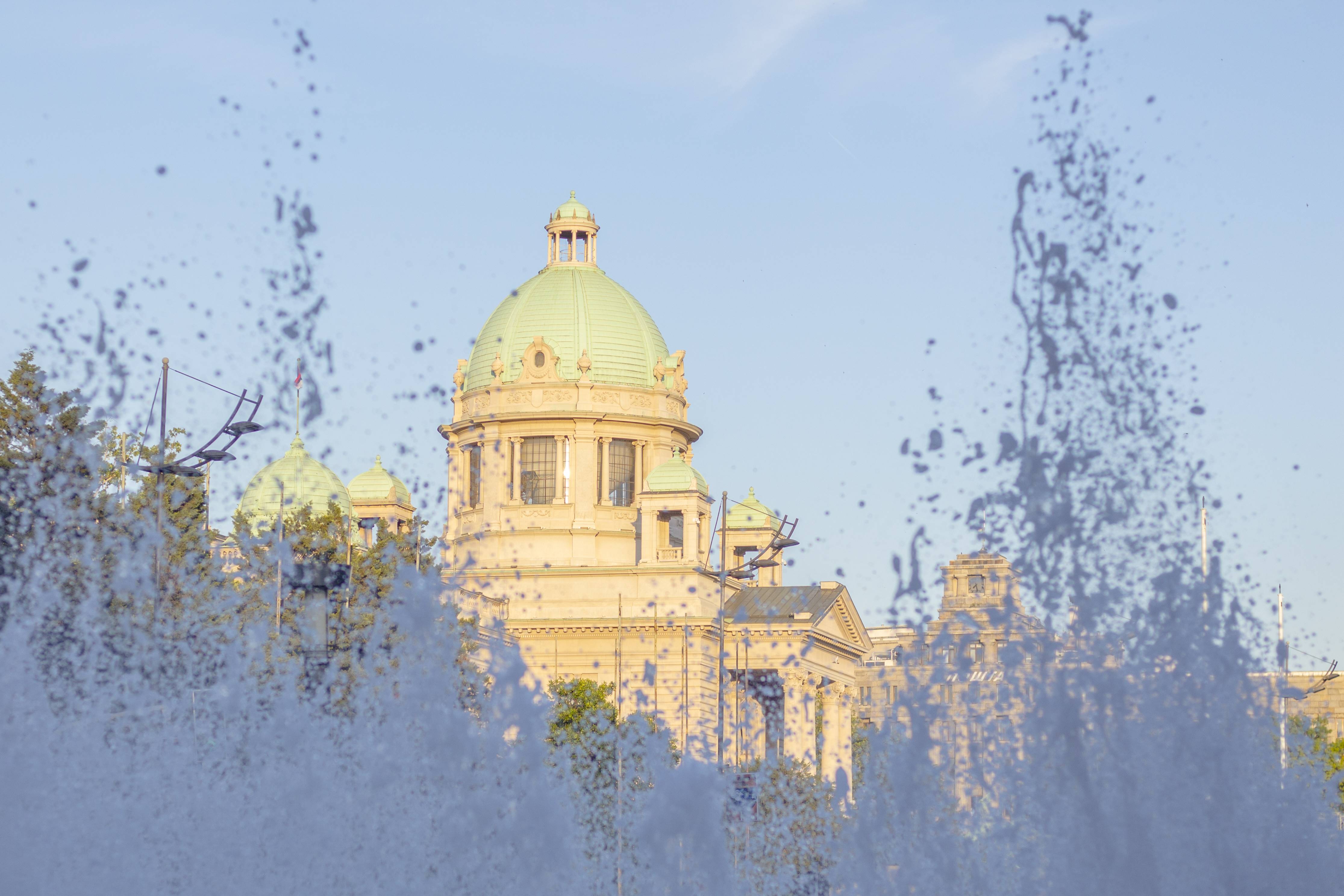 Knez Mihailova – Things to do in Belgrade

This list could continue on and on. Belgrade is chock full of interesting sites to see that hold quite a bit of historical significance. Again, if you’re not very familiar with former Yugoslavia history, don’t miss out on the free walking tours! One of the things we learned on our free walking tour in Belgrade was that the Danube River actually connects 10 cities and 5 capitals, and once separated the Austro-Hungarian and Ottoman Empires. In hearing this, we decided to sleep in Europe’s first floating hostel…

Where to Sleep in Belgrade? ArkaBarka Apartments

I mean, who wouldn’t want to stay at a hostel or in apartments casually floating on the Danube? It's one of the coolest things to do in Belgrade! ArkaBarka is situated in a quiet and peaceful, but central location in Belgrade. It’s about a 20-30 minute walk from city center, or three easy stops on the bus. We found it far superior to stay slightly outside of the city center not only because it is less hectic, but there is also free parking if you have a car… and I highly recommend renting a car while in Serbia! If you aren't comfortable renting a car though, you can always check out Webjet's travel packages for a guided tour too! 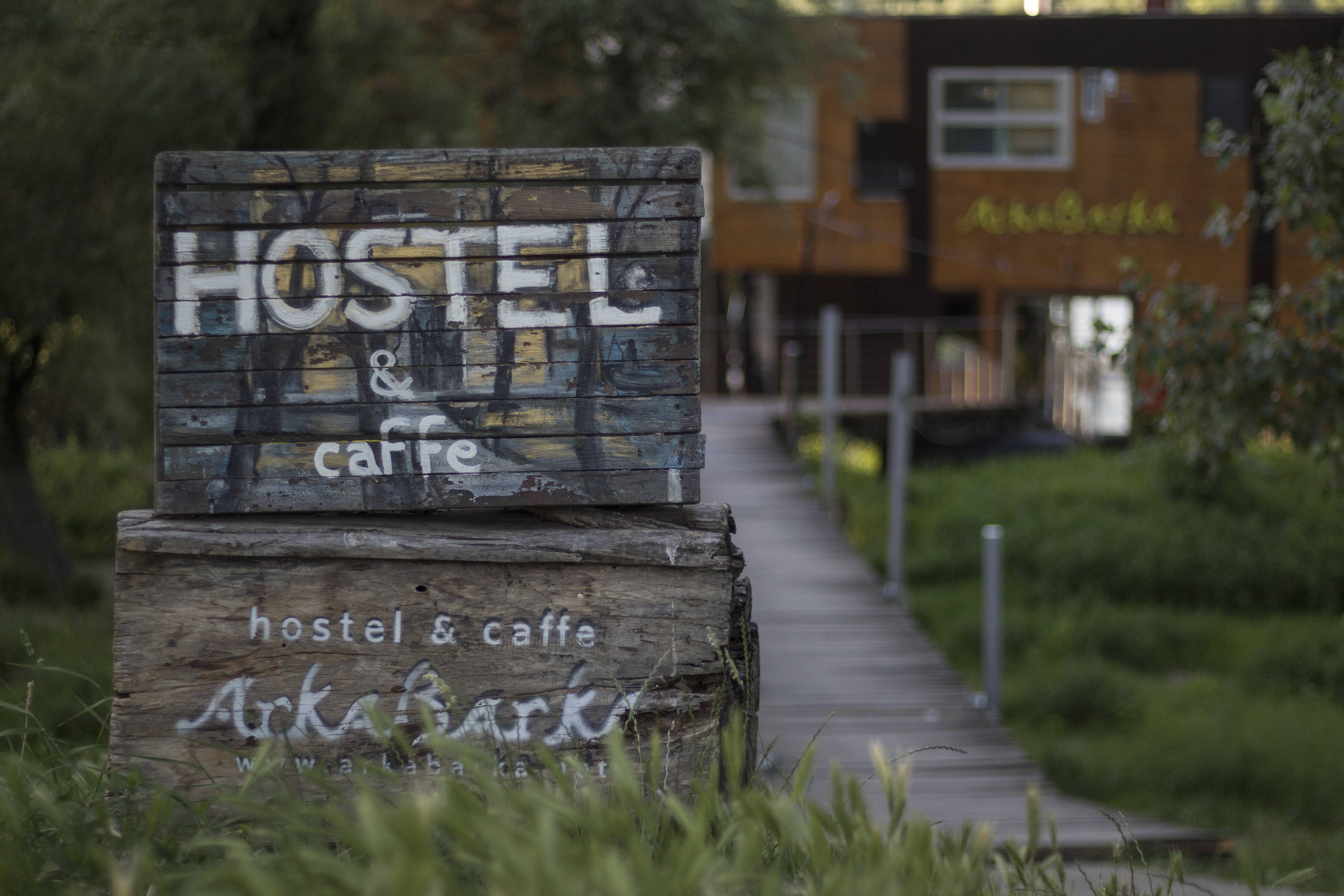 We were greeted by lovely, chatty staff at all times, and were continually mesmerized by the uniqueness of ArkaBarka, be it from the art and decor to the outdoor terrace, and the cozy café for locals and guests alike. ArkaBarka was built in 2007 and renovated in 2016, so it was clean as could be too! 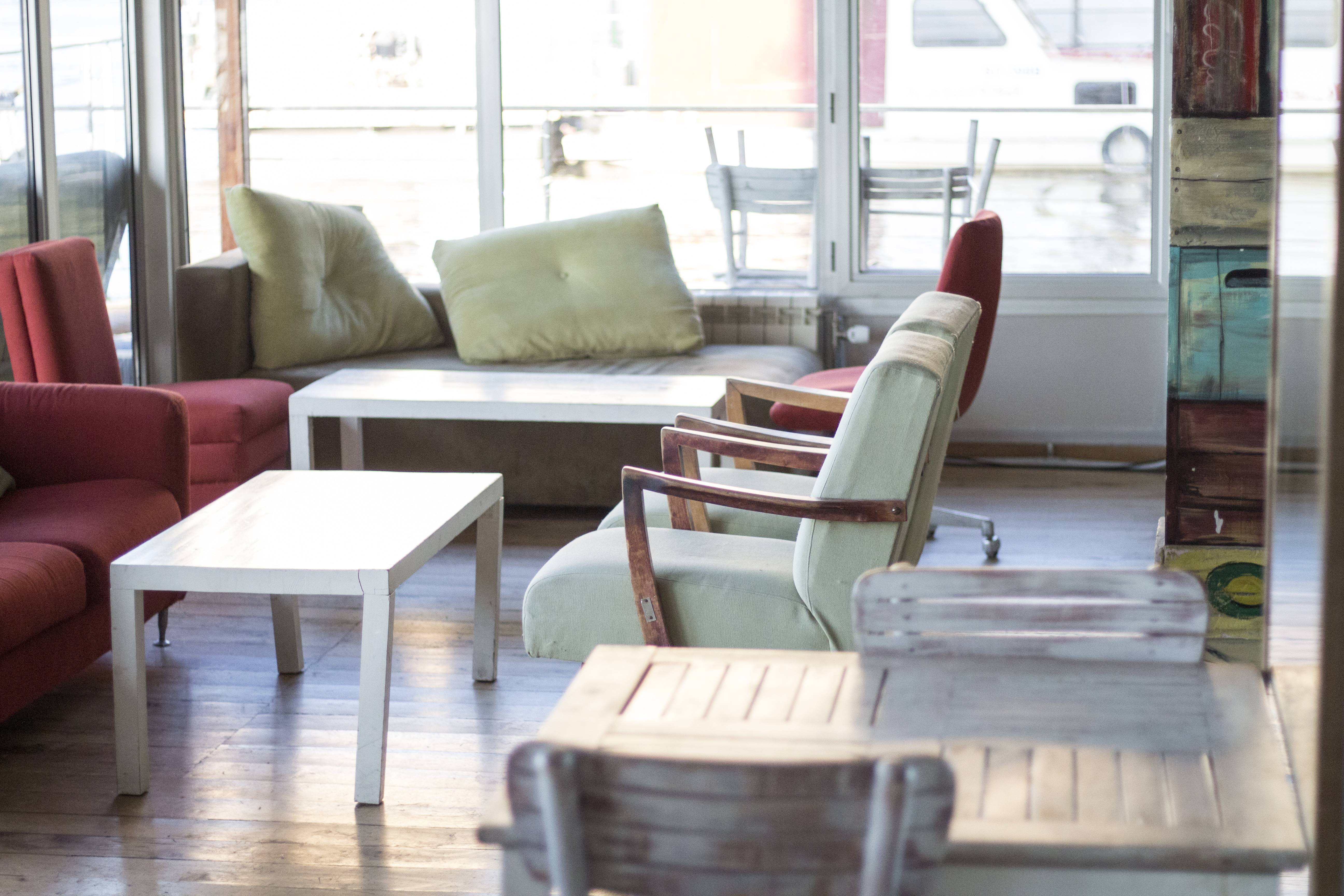 We had a comfortable private room with en-suite bathroom and air conditioning in the apartment building, and made that home base for four nights while exploring Belgrade. There’s free WiFi throughout the hostel and apartments, as well as a free waffle breakfast daily. Grab a coffee and some food, and enjoy gently rocking on the outdoor patio taking in the views of the Belgrade Fortress. 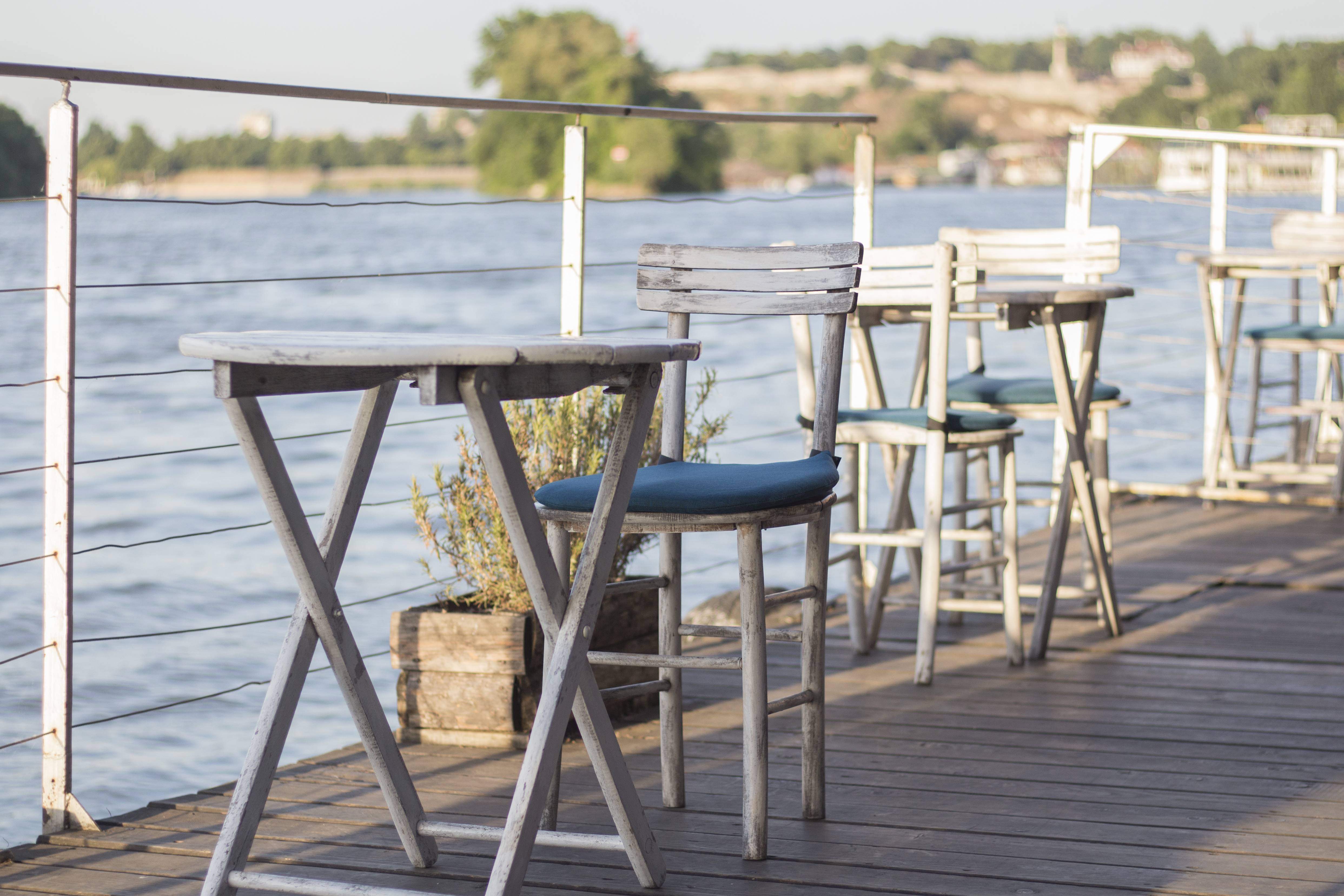 Sleep in a Floating Hotel – Things to do in Belgrade

While many suggest going to the fortress for sunset, I personally enjoyed watching sunset from our floating terrace at ArkaBarka each night. This is honestly the only place I’d consider staying in Belgrade, and will surely be back! 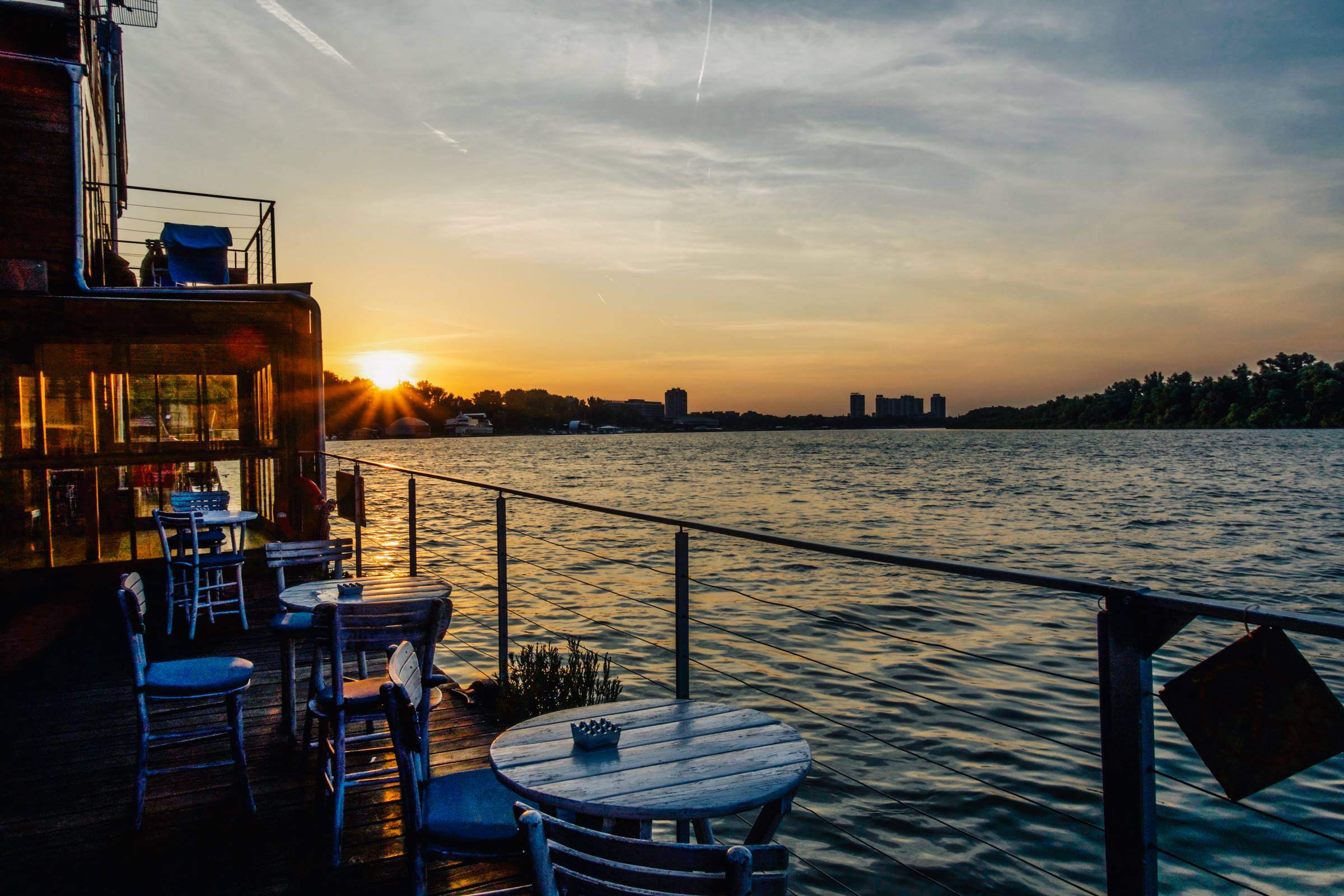 After accomplishing all of these incredible things to do in Belgrade, be sure to rent a car to start a stunning road trip through Serbia's countryside!

Interested In The Best Things To Do In Belgrade? Pin It Please! 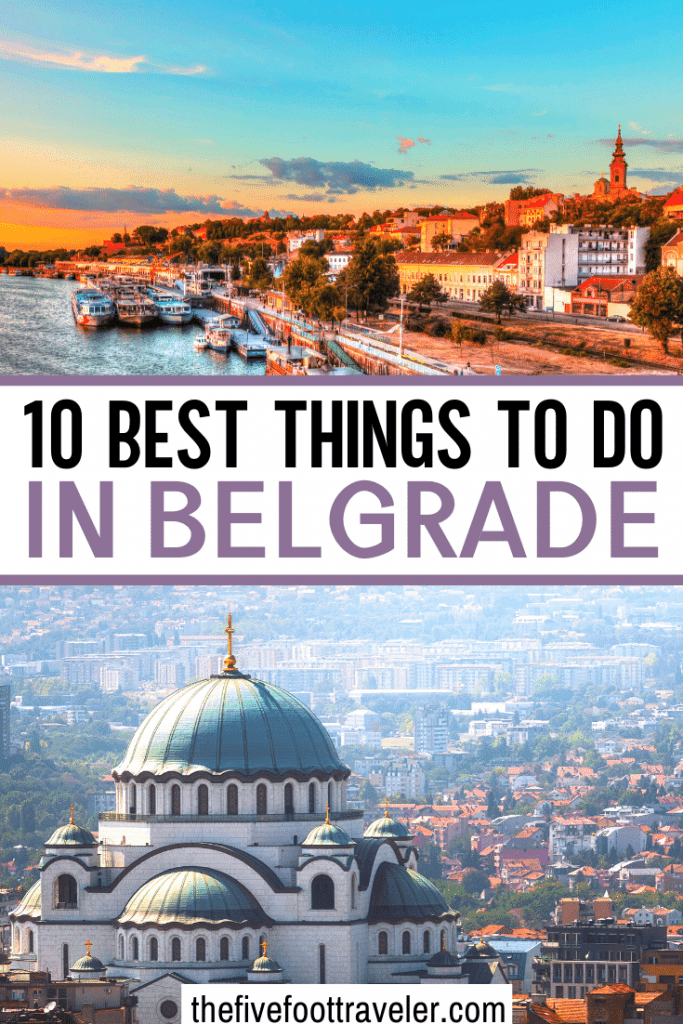